I started my morning with Lyn driving me to the pharmacy. Those Bull Ant bites had swelled more than the day before. The pharmacist sold me some cortisone and an antihistamine.

When we got back to Jan’s house, Lyn called me over to see a Kookaburra sitting on the fence. As I got my camera ready, it jumped down to the ground. I clicked quickly before it flew away. What a surprise to see that it had a worm in its mouth. 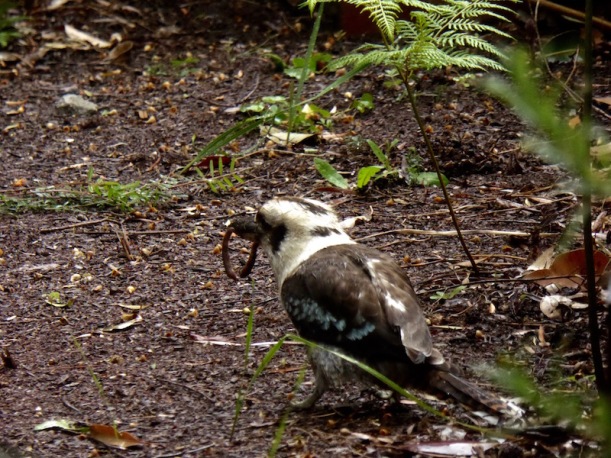 We went back to the Sea Garden for a great breakfast. Jan and I shared the Mediterranean breakfast.

We were on our way to Pemberton and decided to stop at Brown Hill Winery. It was certainly a much more understated winery than the others we visited. 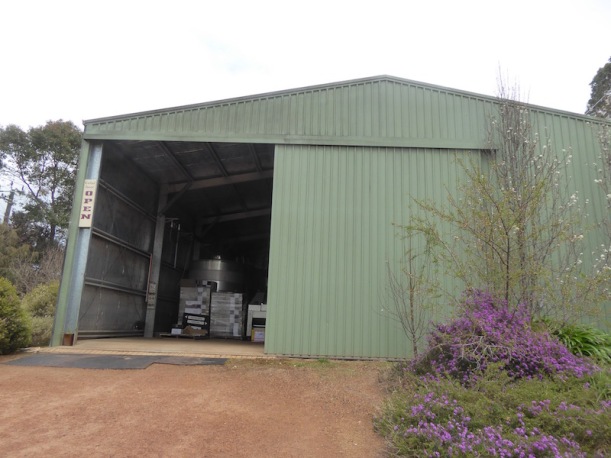 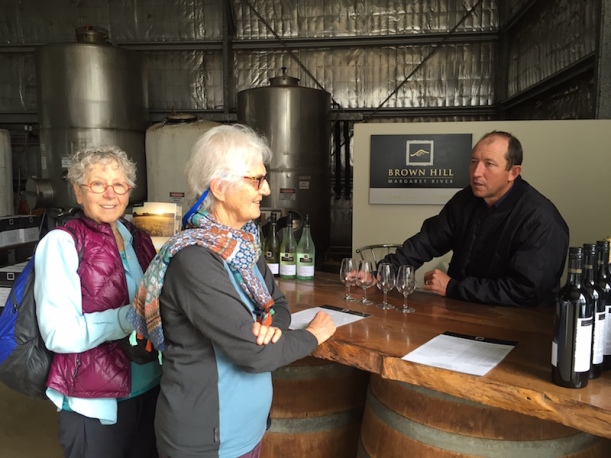 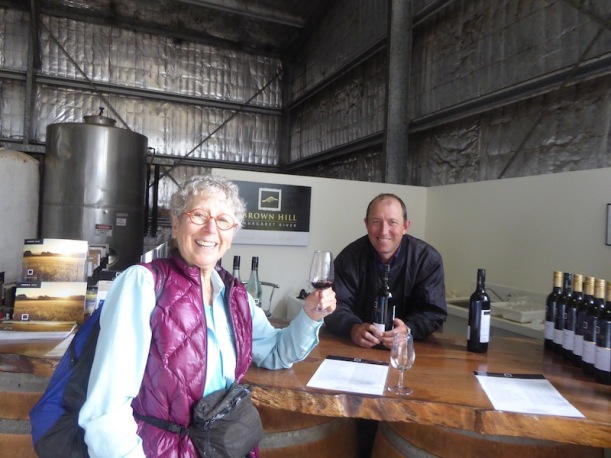 Rose and I each bought a bottle of wine for our evening times together. Lyn and Jan have been providing all the wine we have been consuming up to now.

We stopped along the road to take a short walk and go orchid hunting again. We only saw a couple of orchids that were the same as ones we had seen before. I did take a photo of this Kicking Cow.   We thought it was an orchid, but it is not.  It is really much smaller than it looks – maybe about 3 cm. 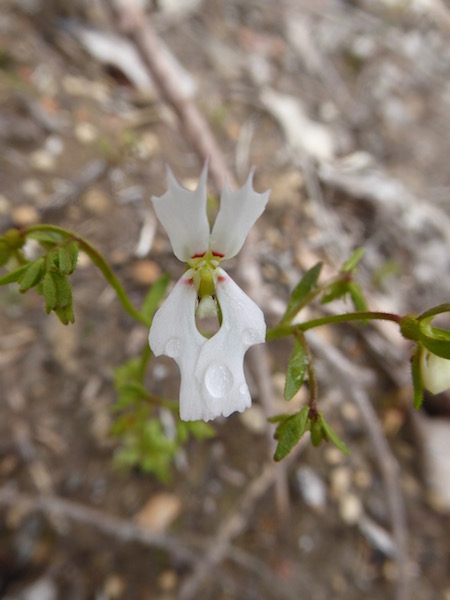 We were passing a lot of Tea-trees. 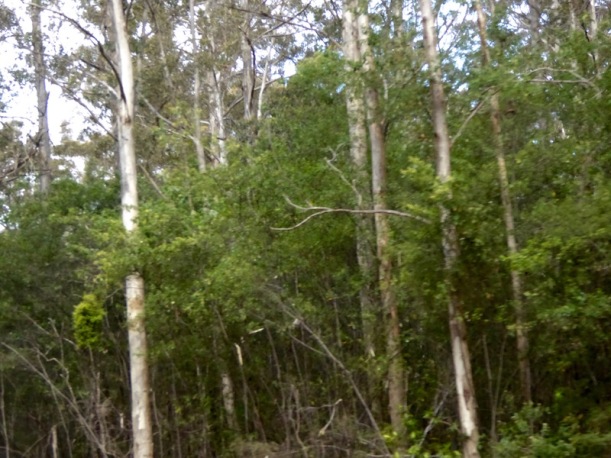 The oil from the tea-tree is used as an antiseptic and anesthetic.

The town of Nannup where we stopped to walk around and have lunch was very cute. I took a photo of the small Uniting Church just to remind me that several of the people in our Monk’s and Mystic’s Dance Workshop were members of that church.  It is a combination of Methodist, Presbyterian, and United Church of Christ. 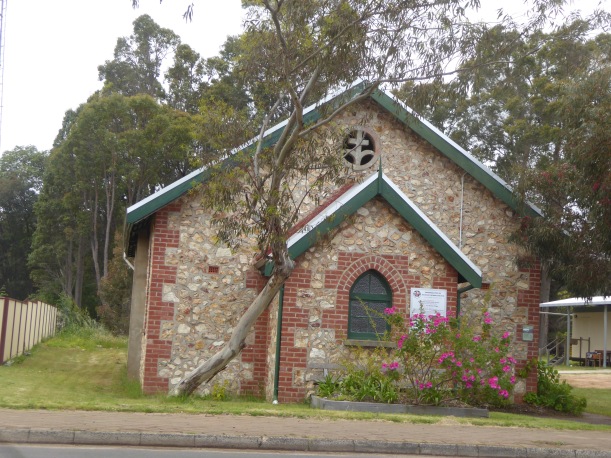 Jan told us that she thinks that towns which end in …up mean something about being near water.

We went into the little store called, “A Taste of Nannup and Beyond” where I bought Kangaroo Salami for us to share at dinner time. 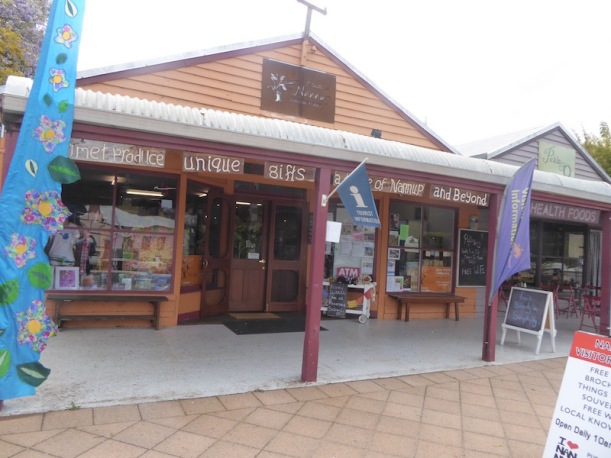 We walked through town to the Old Railroad Bridge, which goes over the Blackwood River. 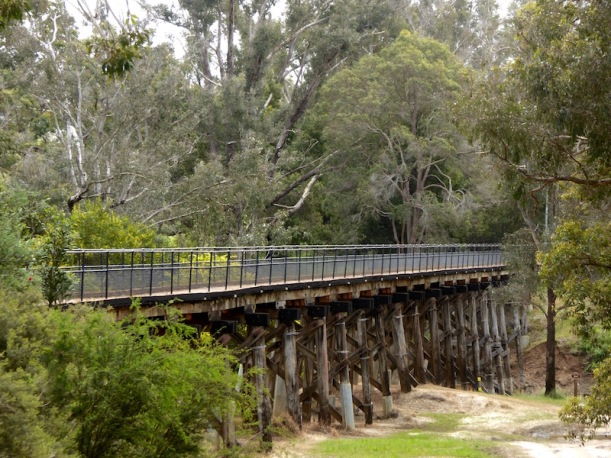 This was a sculpture we saw on the way. 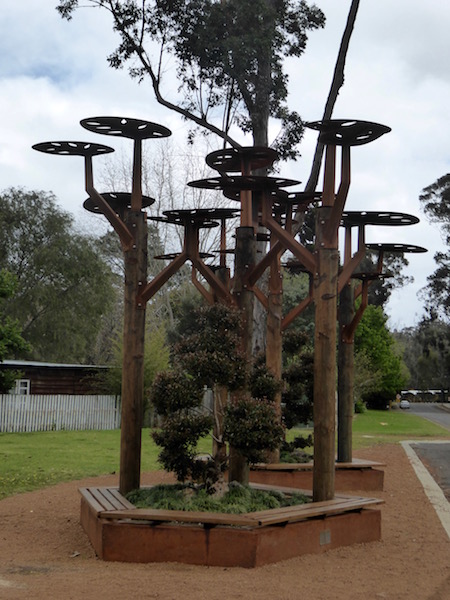 Just before the bridge we saw this beautiful Scarlet Robin. 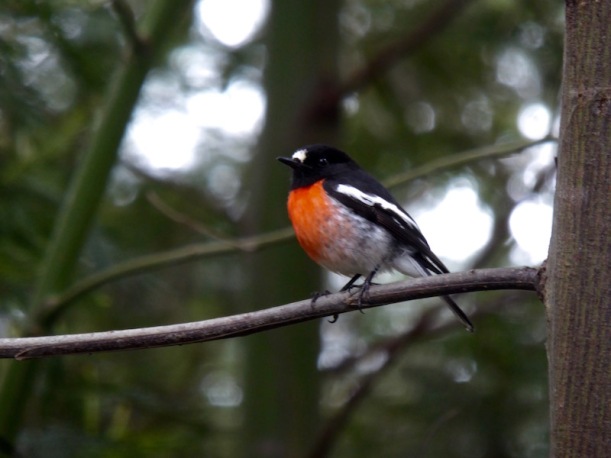 This tree, which is below the bridge, has been marked with the level of water each time the river flooded. Look high up to see the flood from 1910. 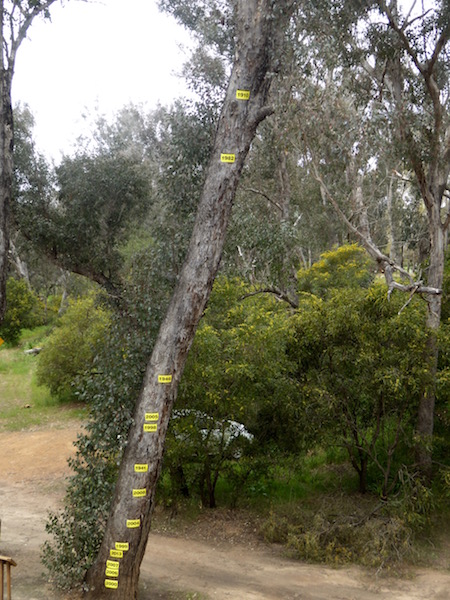 On our short hike Jan showed me a plant called Sundew. It is a carnivorous plant and a couple of them had small ants on them. 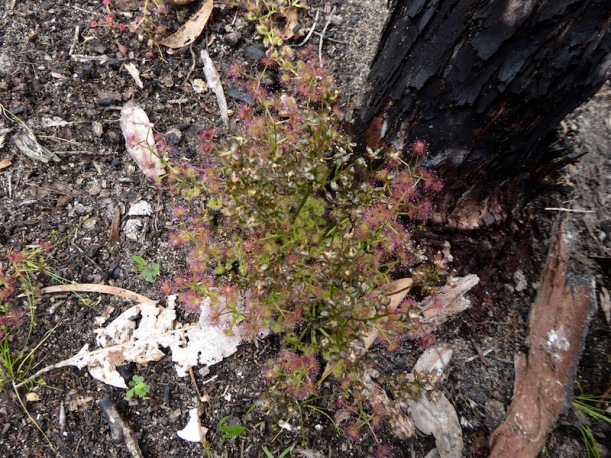 She also showed me a grass tree that had a flower growing out of the top. 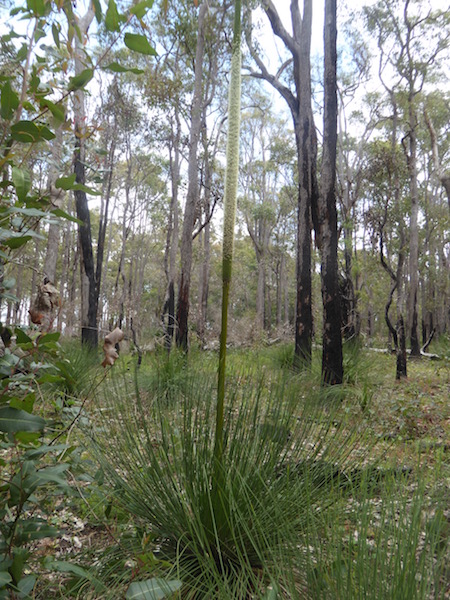 We had lunch in the little café next to the Taste of Nannup.

On the way to Pemberton we drove through beautiful Kari tree forests and lush rolling hills with cows and kangaroos grazing on them. I didn’t get good photographs.

We stopped at a gallery in Pemberton. Lyn found a print that she probably wants to buy so we will return there.

We then drove through Northcliffe on our way to Watermark Kilns which is the rustic place we are going to spend the next two nights.

We took a walk on the Bibbulmun Track and found the shelter where people who walk this track sleep for the night. It is a 3 sided shelter. This one is called Shafer Hut 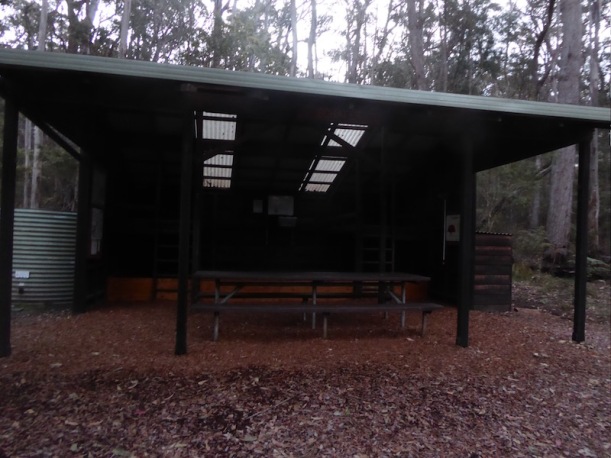 There is a nice lake near the hut. 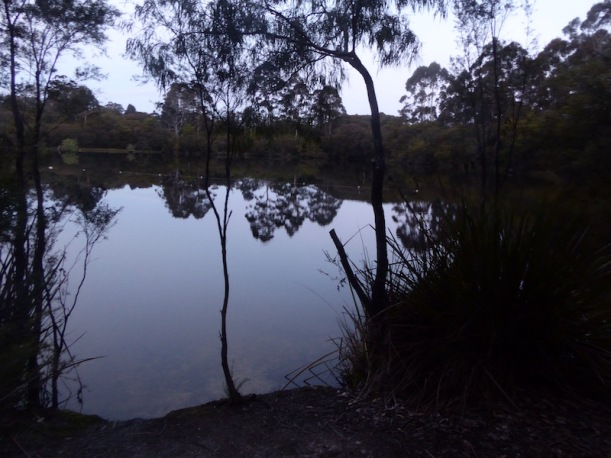 When we were leaving Shafer hut, we heard a Kookaburra laughing. We didn’t see it, but it was great to be able to hear it.

I am glad we are staying inside at Watermark Kilns. Jan cooked a delicious dinner of roasted vegetables and we all tried the Kangaroo Salami. I think I was the one who liked it the most. 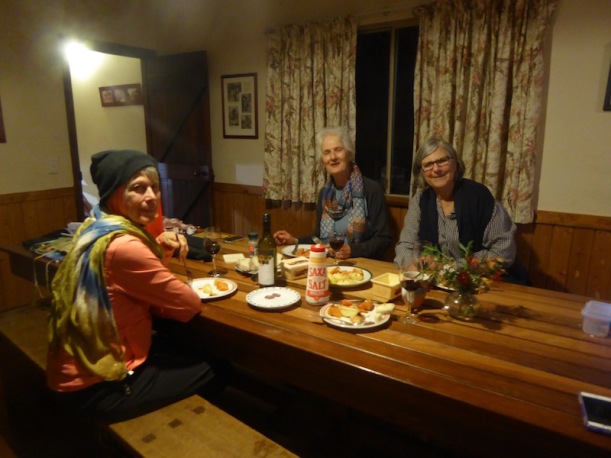 There was a beautiful full moon tonight to end another great day in W.A. 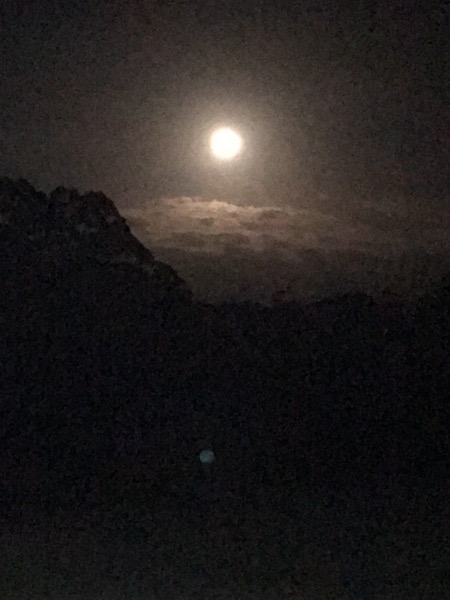 I started my morning with a walk along the Margaret River. I found some more flowers and even some orchards. At one point the path ended right at somebody’s house. They had left food out for the parrot I saw in their yard. It was a very pleasant walk. 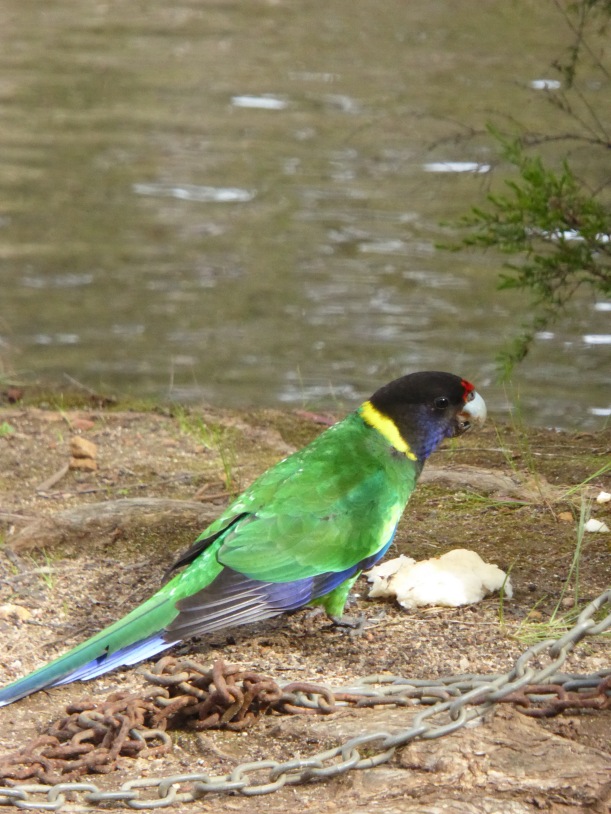 Today looked like a mostly rainy day. We decided to drive to a couple of wineries. The first one was the Watershed Winery, We planned to have tea and scones here, but they were out of scones by the time we arrived.

It is a very expensive winery in a beautiful building with wonderful landscaping. The property is actually located on a watershed and the property used to belong to Jan’s family farm. The winery people cleared all of the land. You can see Jan’s house in the last photo. 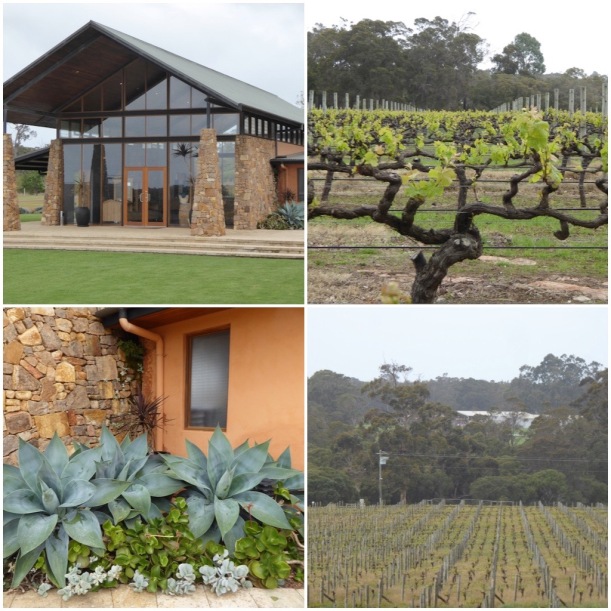 We stopped at Voyager Winery to have tea and scones, but they had sold all of the scones before we arrived.  So we headed out to the next winery.

At the Leeuwin winery we actually did a wine tasting. My tasting wine is a new behavior and at 11:00 am is certainly something rare. We had our tea and scones here. The presentation was very nice. After our treat we went downstairs to their gallery where the paintings from many local artists were displayed. Many of the paintings were actually used for the labels for their wine.

Lyn heard a Kookaburra singing.   I didn’t hear it, but I got a photo. I loved the trees on the property. 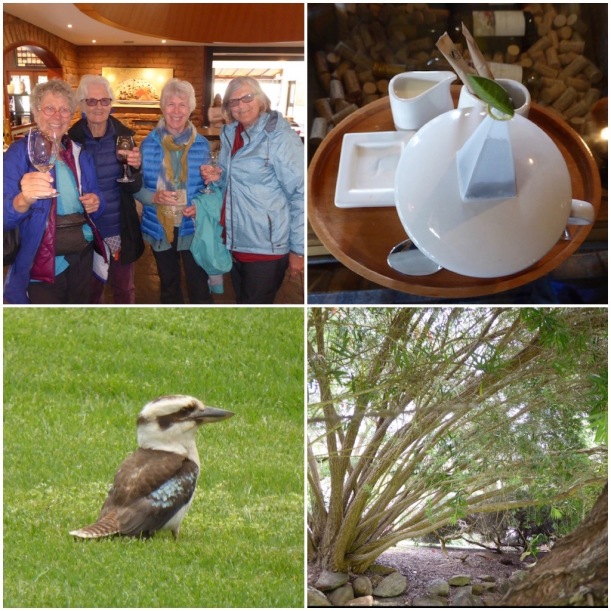 We stopped at the Payet Gallery. It was a beautiful building with wonderful displays of jewelry and other art objects. 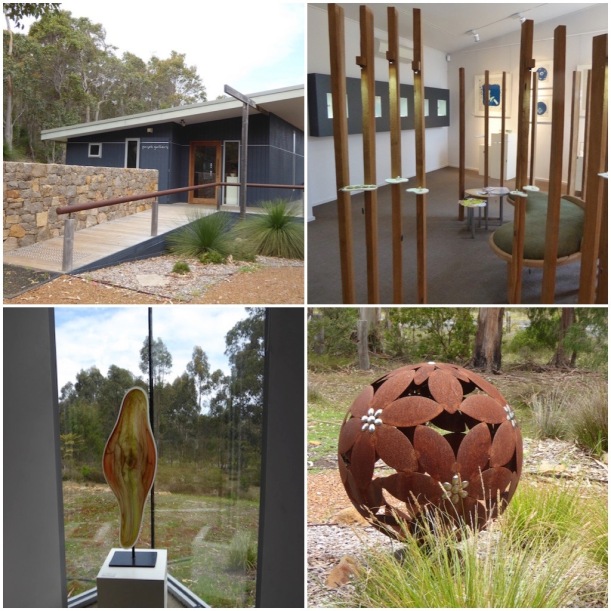 Next we spent a short time at Redgate Beach. I loved watching the waves crash against the rocks. 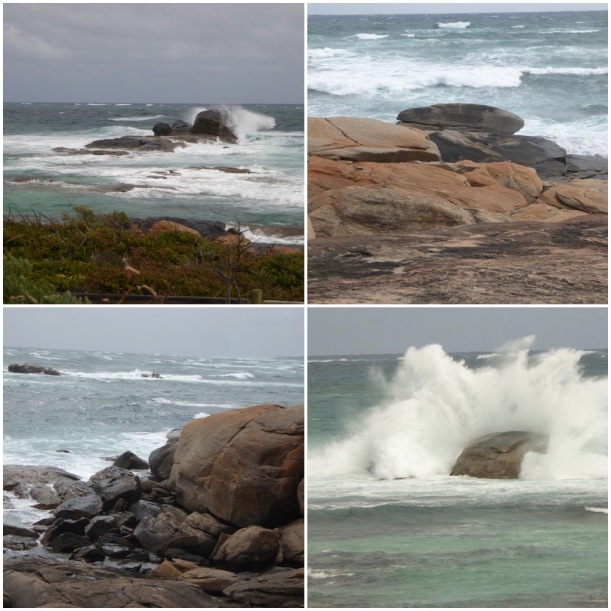