I am finally someplace where I can post the last couple of days.  It was really cold night before last. It took a long time for me to finally get warm enough under the covers, but the air going into my CPAP machine was constantly chilling my face. I sure missed the electric mattress covers we had the last couple of nights.  I finally figured out that putting my whole head under the covers would work. The first thing I did in the morning was to take a hot shower.

Trevor, one of the owners of Watermark Kilns, took us to see how he farms Marrons.

Jeanette, the other owner, is going to cook Marrons for our dinner tonight.

I learned that the reason this place is called Watermark Kilns is because it used to be a tobacco farm and the house where we are staying was used as a kiln to dry the tobacco. It is now a Heritage Site.

We drove into Northcliffe and stopped off at the visitor center.   We met Leslie Harrison who has been taking care of joeys who have been found in the wild alone. Sometimes it is because the mother kangaroo has been killed. She has been doing this for about 32 years and has raised over 250 Joeys.

It was really so much fun watching the Joeys play with each other.

The best part was being able to hold them. 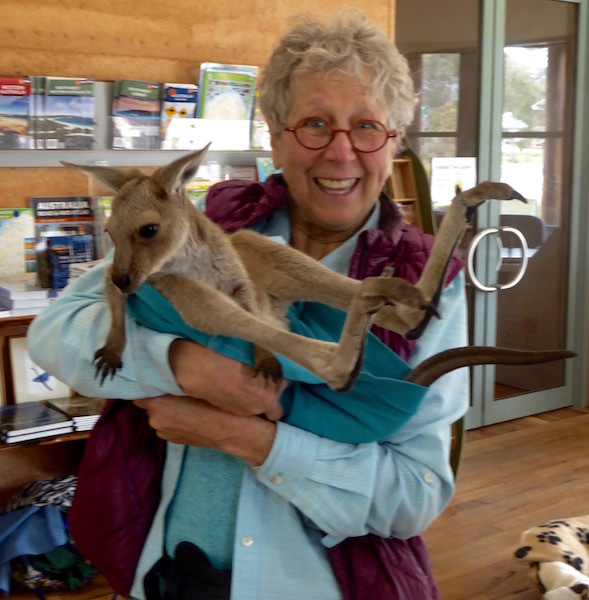 Here is a photo of Leslie, Jan, and me. 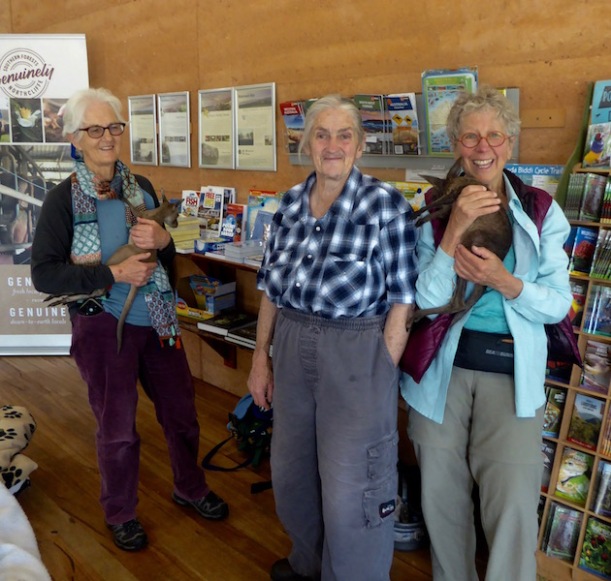 Leslie is known as “Kangaroo Lady.” She feeds these joeys every 4 hours / 24 hours a day. That is a lot of feedings over 32 years. 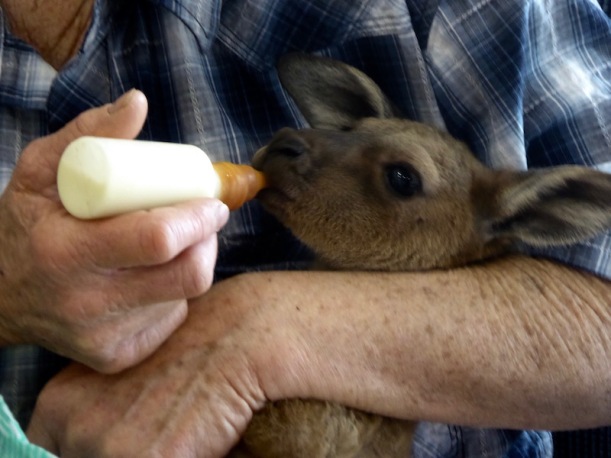 We had such an absolutely wonderful time.

We drove to Pemberton and Lyn purchased her print.

Then we went to see the Glouster Tree, which is a giant Karri Tree in the Glouster National Park.  It is 72 meters in height. It is the world’s second tallest fire-lookout tree and visitors can climb up to the top. Only 20 percent of the visitors climb to the top of the tree and most make it only part of the way before turning around. 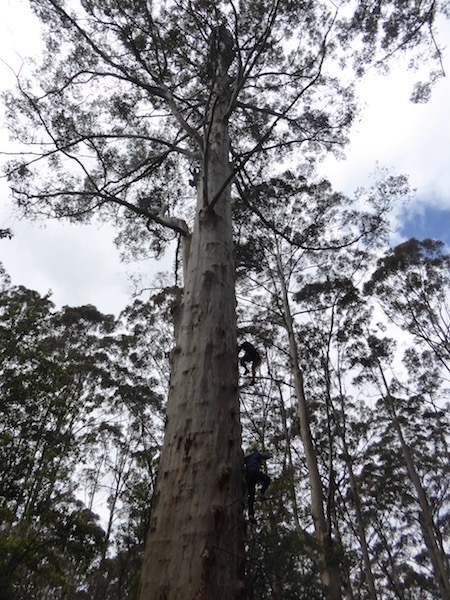 …. and thought it would take too long. So I came back down. Rose took this photo of me from the bottom.

Lyn, Rose, Jan, and I started to take a walk in the bush. I said that I wished I had climbed to top and Jan encouraged me to go back and do it. I knew I would kick myself if I didn’t go to the top. So they went on their walk and I went back to the tree.

There were people at the bottom of the encouraged me to go for it.  It was exhilarating.  I made it. The views from the top were spectacular. There was a father and son from Malaysia up there with me.

END_OF_DOCUMENT_TOKEN_TO_BE_REPLACED

Before I write the post for our trip to Lyn’s Farm (Lough More), I want to add something that I learned (and found interesting) when we visited Kings Park Botanical Garden.

Now for our trip to Lyn’s farm.

We took a leisurely, scenic drive to the farm. On the way to there stopped at a Sunday market in Mundaring and at a bakery to buy bread.

We Stooped a Lake Leschenultia for coffee, tea, and a smoothie.

Jan showed us the pipeline, which we could see running all along the side of the road. C. Y. Conner designed it. He was Irish man who came from New Zealand, but Australia claimed him. Many people ridiculed him because the water did not reach its destination by the time he said it would.   He was devastated and actually committed suicide before the pipeline was completed. The pipeline turned out to be an amazing engineering feat built about the turn of the 20th century. It still pumps the water from Mundaring to Kalgoorilie, which is 600 km. The original pipeline actually took the government’s whole year’s budget to build it.   The pipeline is still in use today.

We stopped for a few minutes on the banks of the Avon River in town of Northam. By the way, the Russian man who flew around the world in an air balloon took off from Northam, made it around the world, and finally landed back in Northam.

We arrived at Lyn’s house, which is a lovely brick home on her 5,500-acre farm, which produces 3800 acres of hay. They process up to 6 to 7 thousand tons of hay each year. They also have 600 acres running sheep (a little over 100 sheep). The rest is rocky hills and land down along the river, which can’t be cultivated).

Darren took  us for a ride around the farm.

How lucky could we have been? There were a couple of kangaroos right on the road in front of us. I was so excited about our first sighing of kangaroo in the wild. Lyn said it was unusual to see them out in the middle of the day. What fun.

They have over $800,000 of investment in equipment, which is only used for hay and over $500,000 of equipment that can be used for other projects.

The hay is sold to Japan to feed cows for the dairy industry. Darren explained why Japan buys hay from Australia, but I am not sure I understood.  The Japanese prefer whole milk instead of powdered milk.  I am not sure why the Japanese don’t have the hay to feed their cows.  He may have said it is  because of the climate in Japan.  The cows had to be moved from outside to inside for feeding during the colder climates.  This process of moving the cows from outside to inside led to lower milk production.

I think it was sometime in the 1980’s that they discovered the benefit of Australian hay for their cows.

Jan, Lyn, and I took a walk down by the Southern Brook. First we collected some wood for the fireplace.

We walked along the brook for while.

The water contains salt because the original vegetation had been cleared in the past. The plants (trees and bushes) would have used the water and because they are not there anymore, the underground water level has risen. Therefore, they need to keep the lambs away from the brook because the salt water would kill them.

Lyn took me on a tour of the farm equipment. I climbed up into the Gleaner. 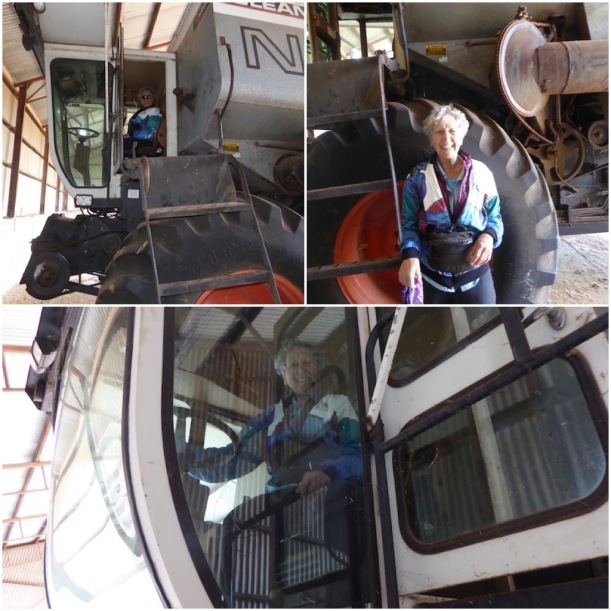 These are Canola seeds used to make Canola Oil. They may be saving these to re-seed. 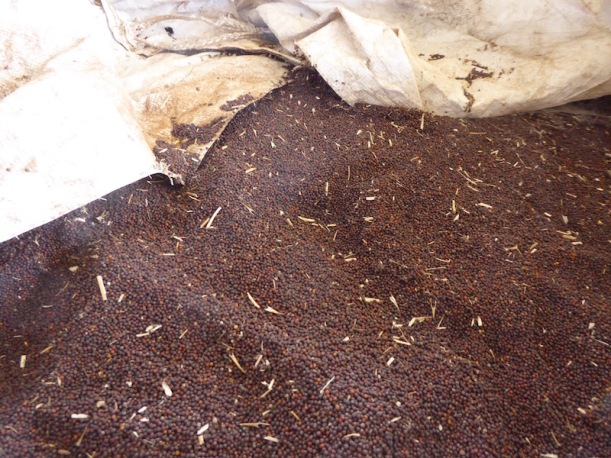 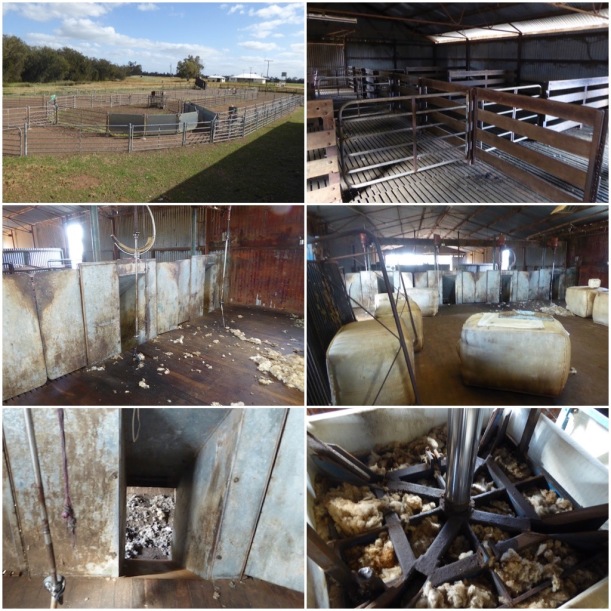 On the way back to the house we took a short cut and climbed over the fence.

I saw a few of these adorable Willy Wag Tails. They actually wiggle their tales.

Lyn’s son (Darren), daughter-in-law (Lesley), and a young man from Denmark (Thomas) who works on the farm joined us for dinner. Her grandson Dylan also came over for a while. I had an absolutely delightful time with them.

It was a wonderful, interesting, fun-filled day.

Day 2 at the farm and going back to Perth:

After breakfast we drove over to Darren’s and Lesley’s House. On the way we watched them cutting the hay. 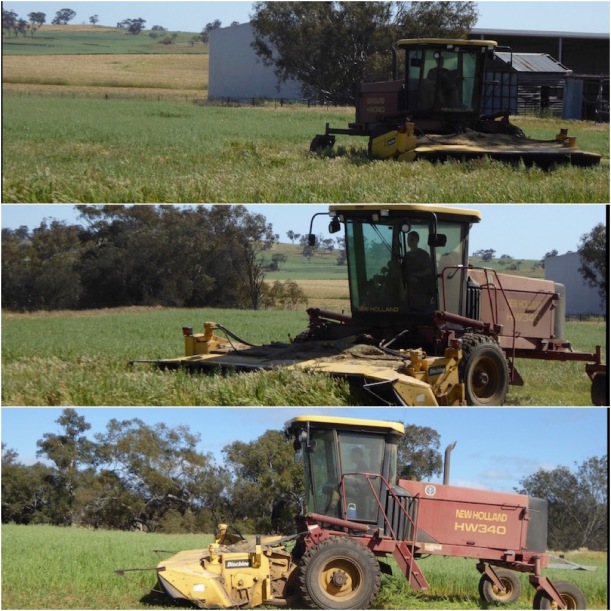 We had another lovely visit with Darren and Lesley. While we were there, the debates between Donald Trump and Hillary Clinton was being broadcast on their TV.   Rose and I have been so glad to not be in the U.S. at this time, but we did watch some of the debate. Disgusting!!

Darren showed us his vinyl record collection and played part of an old Bob Dylan album for me.

We took different roads back to Perth. We stopped in Goomalling. There were some dome silos there. They seem to be made from fiberglass. 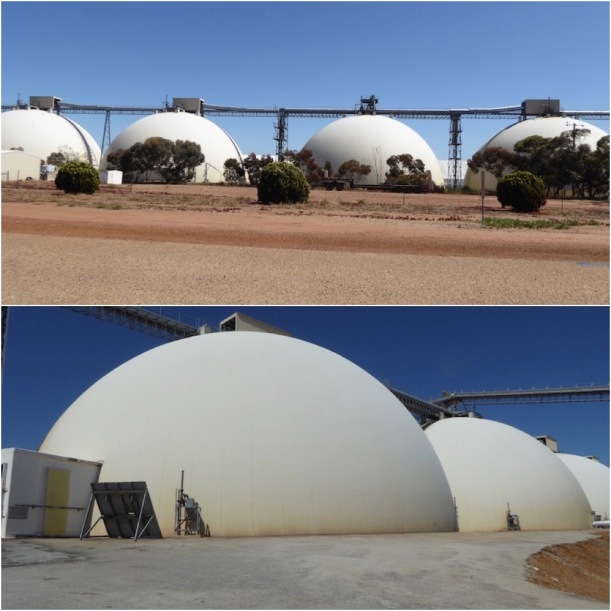