I forgot something from last night. There was a crescent shaped in the sky. That is my favorite phase of the moon. Right above it was Venus. I couldn’t get a photo. The most interesting part is that the crescent was at the bottom – making it look like a smile. Wish I could have gotten a photo of it, but it was too dark.

Rose and I had to be picked-up out on the road this morning at 8:05. Jan, Pip, and Sue walked us out to the road and waited for the Emu Run Tour bus to arrive. After we got on the bus, Jan continued to dance around with her new scarf that Kate gave to her. It was just beautiful to watch her as our bus drove away from Campfire at the Heart.

Our first stop was at the grave of John Flynn. John had traveled vast distances in the area. He found almost a complete lack of services available for the people in the outback. He pressured the church to form the Australian Inland Mission. He was the founder of the Royal Flyers Doctor. They brought medical services and supplies to the outback. He was also involved in the School of the Air, which brought educational services to the outback.

In 1952, the year after Flynn’s death a large round stone was transported from south of tenant creek to be used as a marker for his grave.  The stone was taken from the highly sacred woman site of Karlu Karlu (devils marble) which is tied to many of their stories, personal names, and cultural beliefs. For over 20 years it’s owners, the Warmumungy and Katrej people pressed for the return of the stone.  The have finally been able to move their sacred stone back to its original place and put a different stone at the site where Flynn’s ashes have been placed. 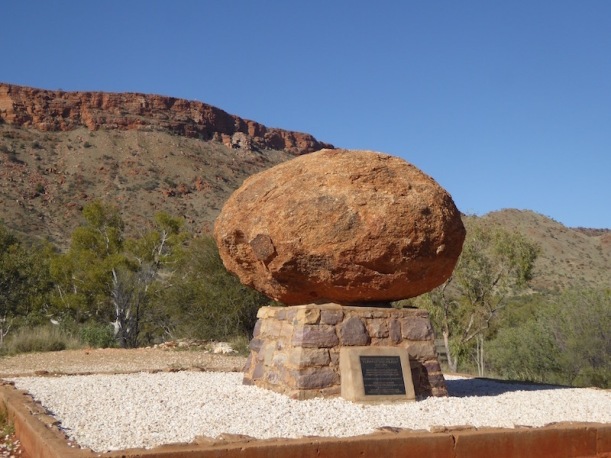 We drove to Simpsons Gap where we had been with the Interplay group. This time I stayed on the path instead of walking up the water.

Rose and I did not walk all the way into the Gap since we had already been there, Besides, was early in the morning we were lucky enough to see Rock Wallabies. There were running around in the rocks across on the other side of the water. Their tails are really long. It was fun to watch one of them eating the shrubs.

By the way, the Gap is compressed sedimentary rock. The youngest rocks in this area are dated back to 900 million years ago. This area would have been taller than Mount Everest.

Then we drove to Stanley Chasm or Angkerle Atwayte. Ida Stanley began the first school in Alice Springs. She later married John Flynn. Michael, the tour guide, told us that the difference between a gap and a chasm.

There are Cycads here.

There was a sign that gave a bit of a different explanation about the procreation of Cycads. Here it said that the grub that lives at the bottom of the Cycad is called a Thrip. Every few years when the Thrip become attracted to the perfume and heat of the mature male pollen cones is when they feast on the pollen. Then they retract into the female Cycads which convey an even more intoxicating aroma. There are Cycads in Syria that are 500 to 1000 years old.

The rocks along the path in Stanley Chasm are black. We were told that algae create the black color. 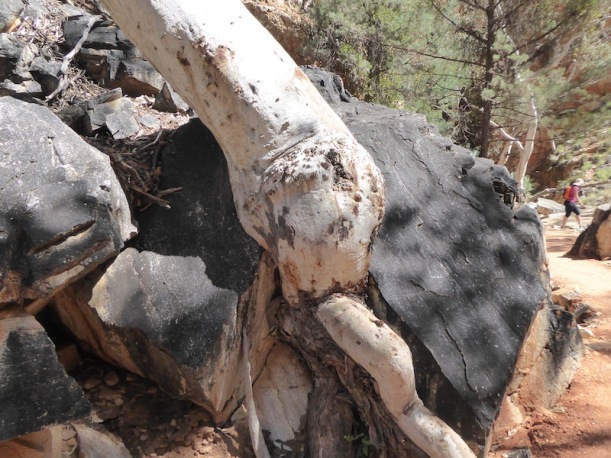 I liked this Gum tree trunk leaning over the path.

The walls of the chasm were beautiful. 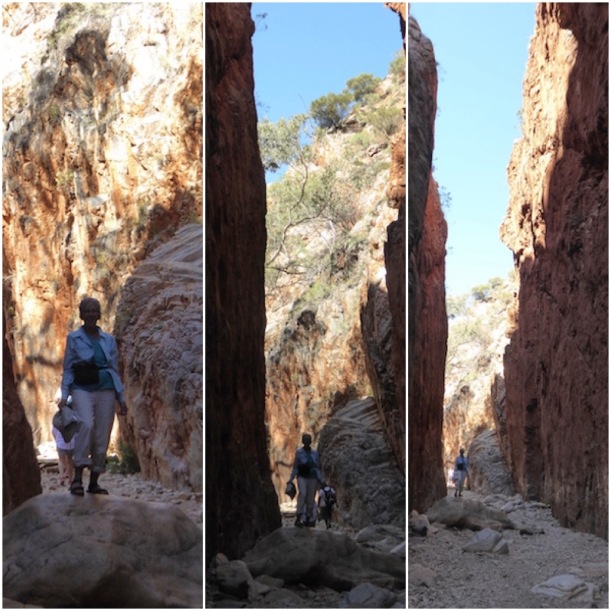 Our next stop was to see the ochre. There are several colors. We were told that the

When preparing medicine, it is important to sing over it. It enhances the healing power of the ochre. This is the custom known as wuyla (pronounced woolya) by Western Arente.

We went to Ormiston Gorge. Some of us climbed up to see the view in the gorge. There were approximately 225 steps with some gravel paths going up to get there.

Michael prepared our lunch. It was a great lunch.

He told us that he knew the young man named Michael in the shop made the best Iced Chai in the world.   I was ready for a treat. But Michael was not there. Elise, his wife, called for him to return to the shop to make one for me. It was delicious.

It turns out that Michael is originally from Federal Way in Seattle. Elise originally came from Toronto.

There were Spinifex Pigeons hanging around. Apparently they are not very common, but had learned to hank around for the crumbs from visitor’s food.

The next place we visited was Glen Helen Gorge. We walked to a place were people were swimming. I took off my shoes to test out the temperature of the water. It wasn’t to bad so I waded in for a bit. When I saw other’s swimming, I was sorry I hadn’t brought my bathing suit (bathers in Australia). 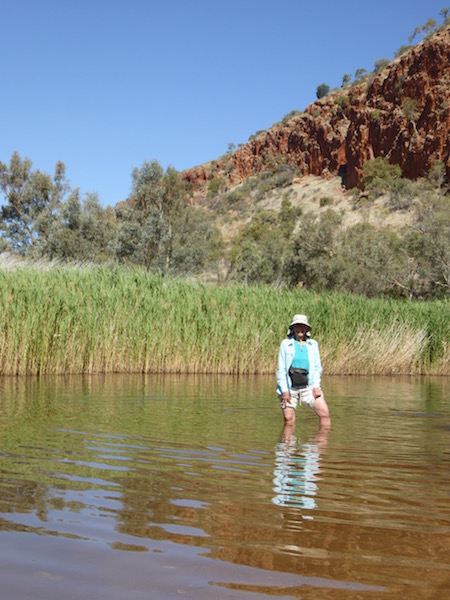 The girls who were swimming encouraged me to come in so I couldn’t resist. A woman from our bus was standing next to me so off came the shirts, pants, bags, and glasses which she held for me. I figured that if I could do it in Antarctica, I could do it in this water that was a great deal warmer. What fun!!

The weather was warm so I dried off pretty quickly.

When we finished swimming, we stopped at the snack shop.  I loved the shoes on top of the piano.  It reminded me of boots being left on the Camino.

Next we went to see a view of Mount Sonders. Apparently the Aboriginal people see one of the rock formations as a woman lying down. There is some story about her throwing her baby off into the crater whole. 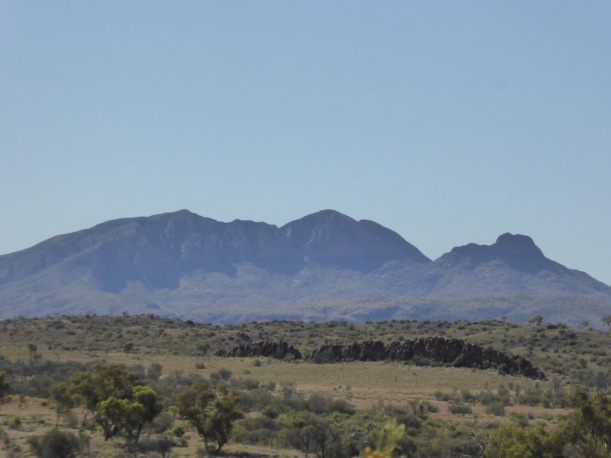 The last stop on this tour was to a place called Ellery Big Hole.  It was another opportunity to go swimming.  Even the woman who held my clothes at Glen Ellen Gorge took her clothes off to swim 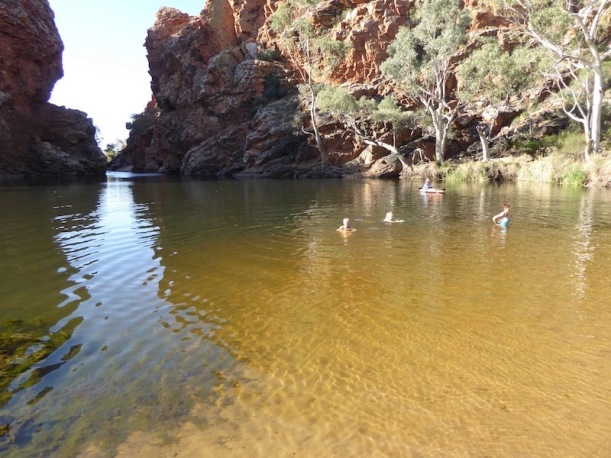 Back in Alice Springs we checked into our motel and then headed out to dinner.  We didn’t like the place that Michael suggested and went looking for the Epilogue where we had eaten about a week ago.  It was closed.  So we went to a place called the Red Ochre.   We were so surprised when we found Kate and Pip eating dinner there.  It was so much fun to see them again and have dinner together.

We took a tour to Palm Valley in a very large 4 wheel drive vehicle. It held 25 passengers.

Our first stop was at  the Hermannsburg Historic Precinct.  First we stopped for tea and scones. 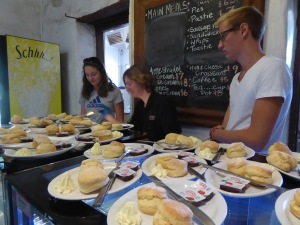 The driver encouraged us to also purchase apple strudel because they are known for having the recipe from one of the German missionaries.

The first Aboriginal Mission in the northern Territory, was established by the Lutheran Church in 1877 on the traditional lands of the Western Aranda people. The Mission was revitalized by Pastor Carl Strehlow from 1894 to 1922.  Below are some photos of the buildings that remain.

On the chalkboard in the school-house was written:

All that is beyond 3 is called a mob 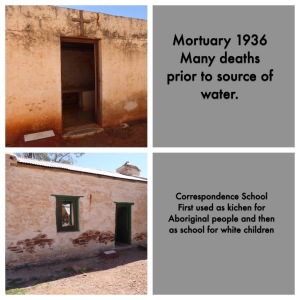 We learned about Albert Namatjira.  Because I think this is a significant story, I  am going to repeat it.

Albert was one of Australia’s great artists, and perhaps the best known Aboriginal painter. His western style  landscapes – different to traditional Aboriginal art, made him famous. Fame led to Albert and his wife becoming the first Aborigines to be granted Australian citizenship. It was a significant achievement, because at this time Aborigines had few.

Albert Namatjira was a celebrity, but not always a comfortable one. It was always a relief for him to leave the big smoke and return to his desert home. Success brought money – and Albert planned to use it to secure a future for his family. He wanted to lease a cattle station – but as an Aborigine he wasn’t allowed.

Next he tried to build a house in Alice Springs. Once again the law prevented him, just because he was Aboriginal.  It was a strange situation. Here was a man, heralded as a top artist, treated like a celebrity and yet not even allowed to own land.

As a citizen Albert Namatjira could now also buy alcohol. In keeping with Aboriginal custom, Albert’s friends expected him to share any alcohol he bought. But in doing this he broke white man’s laws. In 1958, police charged Albert with supplying alcohol to Aboriginal people. He denied the charge, but the court didn’t believe him. After two months in prison, Albert emerged a free, but broken man. He had lost his will to paint, and to live. Albert Namatjira died in 1959. He was just fifty-seven years old.

Albert Namatjira’s life and work have inspired other Aboriginal people to paint. Among them have been his children and grand-children  This great painter captured Australia’s heart in artwork and was praised around the world. His life showed white Australians the injustice of racist laws, and contributed to long overdue changes for his people.

The Aboriginal People were not give the right to vote until 1962.

Here is one of his painting taken from the web.

We drove onto the riverbed of the Fink River which is dry.  The road was very bumpy.  The driver told us about buffelgrass was introduced in the 50s as cattle feed and to control dust.  It burns at 300 C. which is too hot to burn all of the seeds.buffelgrass is also significantly more flammable in creek beds than the soft native grasses. This can fuel very hot fires which damage River Red Gums and other trees. Prior to the introduction of buffelgrass, sandy creek beds acted as firebreaks but now the opposite is occurring. Buffel-infested watercourses provide channels for spreading fires rather than stopping them.  It has now been declared a weed in Southern Australia.

After a while we stopped for lunch.  We took a walk around the area and took some photos.  Then we continued up the river bed which was now extremely bumpy.  The driver did a great job of going slowly over the bumps in the road, but the vehicle still bounced and bounced and bounced.

Here are some photos of the road.

Usually this area is very dry.  But lately there has been an unusual amount of rain.  Because of the rain we were able to see many more flowers than usual.  During this trip, I met Mary and she knew the names of so many of the flowers.  I tried to take notes as we walked, but I dunno (that is another new Australian phrase that I have learned) if I have the names of the flowers correct, but here goes my best attempt.  Some of them I just can’t remember so there are no names.