This morning Aurea made fresh tortilla de queso for breakfast.. 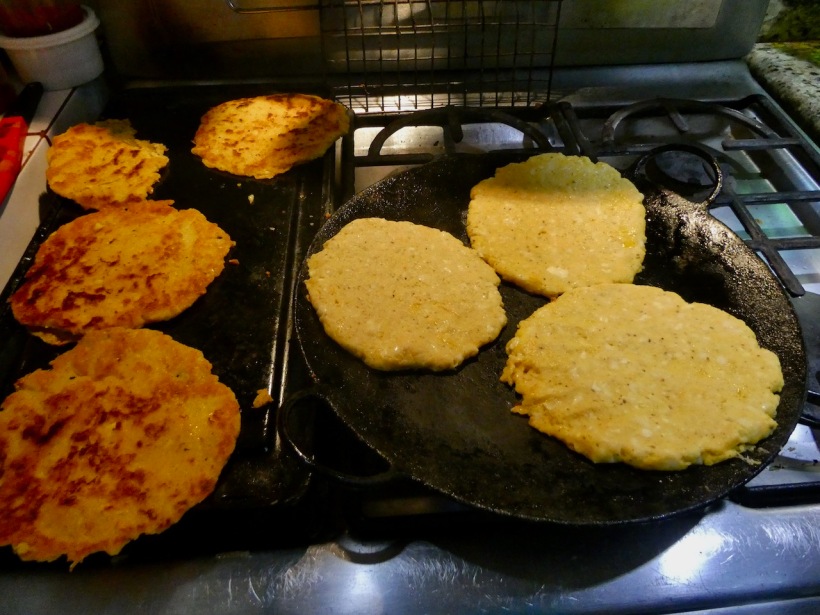 She served them with avocado and they were  absolutely delicious.  I also had a cup of Mario’s organic coffee.  I really liked it.  I told Mario and Aurea that at my age, I don’t want to start drinking coffee regularly because I could easily become addicted and that is not a good idea for me. But the occasional cup of coffee that is this good would be wonderful.

I took a couple of photos from the house this morning.  The valley below the house is beautiful. 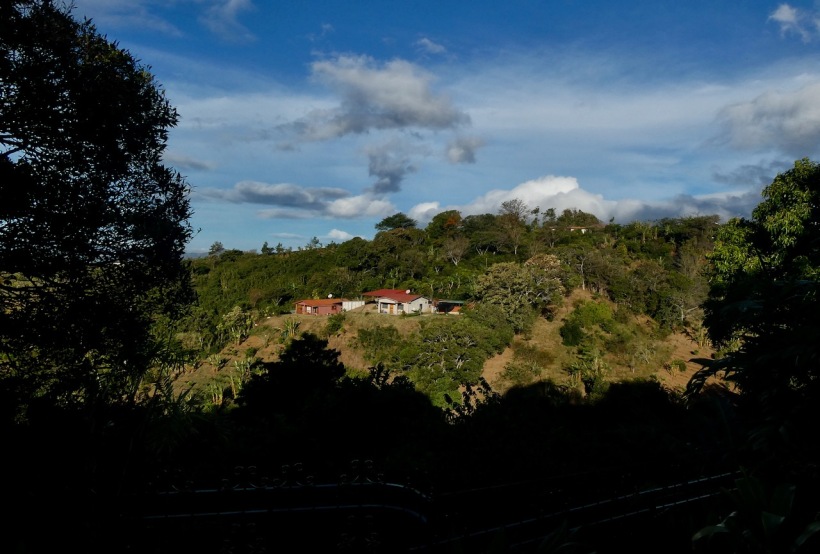 I also took another photo of Mario’s tree.

Mario told me that it could be chilly today so I took my Tyvek jacket and my rain jacket.  We drove to the house where Barbara is staying and took the bus from there.  I am sure glad I had both of the jackets.  It was raining when we reached the parking lot.  Well a group photo was needed to mark this event.

The Ticos debated about switching our schedule and going to the waterfalls first because they hoped that the clouds covering the volcano might lift by afternoon but that was not possible because the park closes at 2:30.

We needed our passports to get tickets to enter.  Then we were given hard hats and told to stay in a group..  We walked to the top of the view point and I was really happy that I brought the rain jacket because the drizzle was pretty constant.

Poás volcano is a powerful symbol of the geothermal forces that formed Costa Rica. If/when  the pressure in these pockets exceeds the weight of the water above, the steam breaks through in geysers that rocket up to 820 feet (250 meters) high. We didn’t have to worry about getting a shower though, the crater is 1,050 feet (320 meters) deep. At almost a mile (1.6 km) across it’s also the largest active crater in the world.  New safety features have been added to protect visitors in case of particularly heavy activity.

The most recent period of violent eruptive activity ended in 1954. The last major activity was in 1910 when nearly a million tons of ash was ejected along with an immense column of smoke and steam.

In April of 2017 an eruption of gas, ash and rocks damaged some of the buildings and trails inducing the government to close the park.  The only views were from the volcanology institute live camera.

Of course, we could not see anything at the top.  I wanted another group photo so I said, “Photo” to a man standing nearby.  We had a laugh when he joined the group to be in the photo. I explained that I needed him to take the photo.

We were there getting wet and conversing with people from Canada and North Carolina  for about 20 minutes but the clouds didn’t lift.  I decided to post a couple of photos of what it might have looked like. 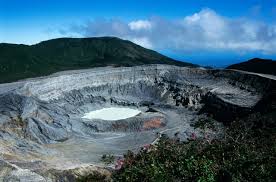 Mario told me that this second view of the volcano was before the last eruption. 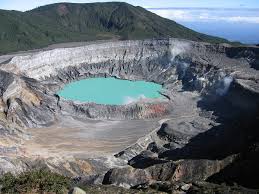 Sure wish we had been able to actually see it.

When the people who Barbara and I were talking with said it was time to go down, we looked for our group and couldn’t find them.   So we walked down with the other people.  Then we learned that the ambulance that was parked at the top took the rest of our group to the bottom.

We saw a Costa Rican squirrel for the first time.

We all got into the bus for the ride to the Peace Waterfall Park.  It is the most visited privately owned attraction in Costa Rica.  While waiting to get our passes, I took a photo of a humming bird and a red bird eating fruit.

The sinks in el baño were very interesting.  It took me a minute or so to figure out how to turn on the water with the little rock like thing next to the sink.  . 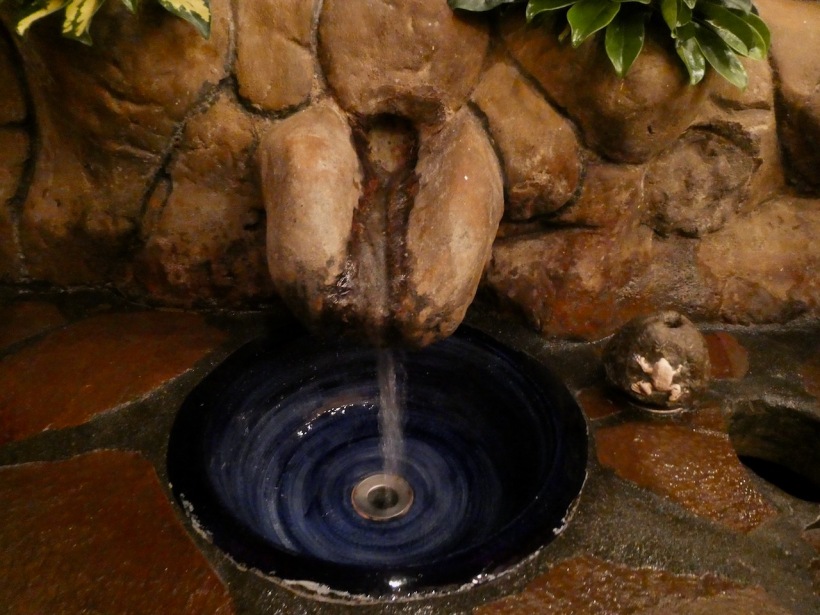 We had about 2.5 hours to explore the park.  Barbara and I walked together.  We spent a lot of time trying to get photographs of larger birds and were both frustrated with our cameras.  Nevertheless we did get some photos. 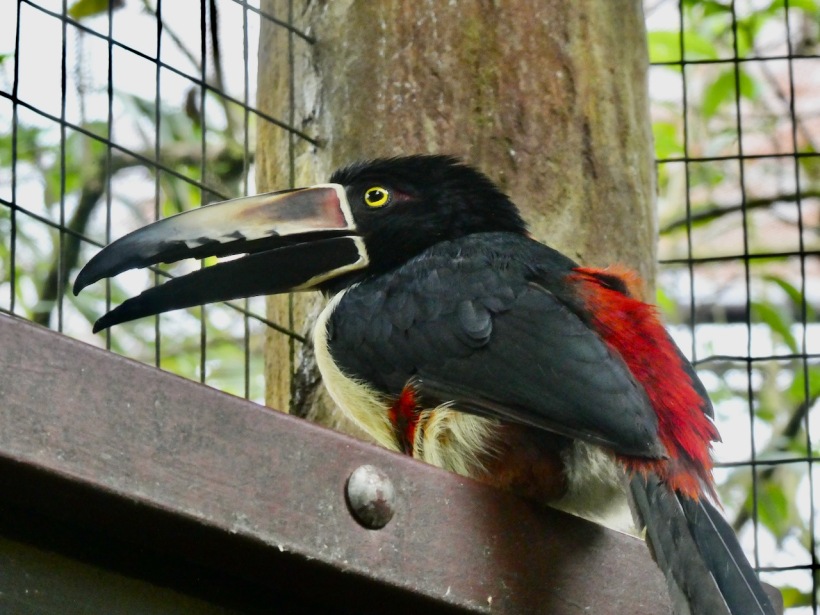 And even ducks that remain pretty camouflaged.

I liked these three in a row.

Well, I had another change to photograph a sloth, but this one was not in the wild. 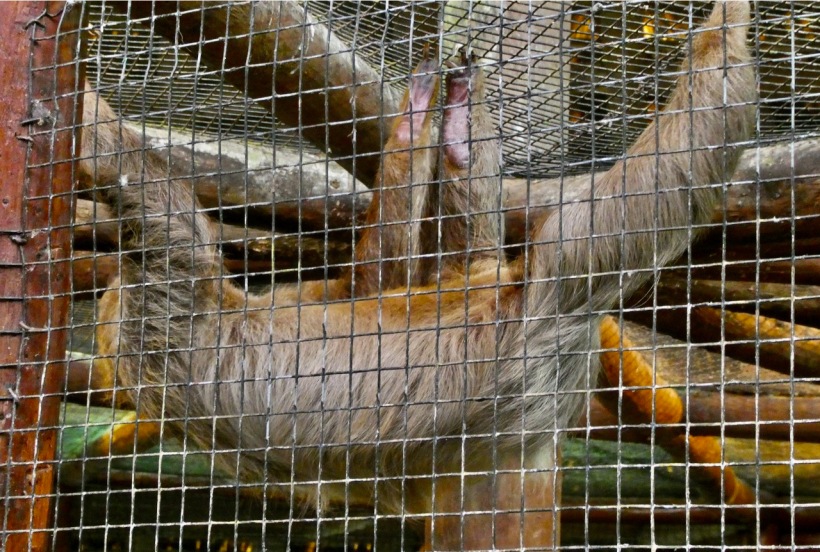 Next came the butterflies.  We spent a lot of time trying to capture a photo of a blue one with its  wings open.  They are also quite beautiful with wings closed.

A couple of them coorperated. 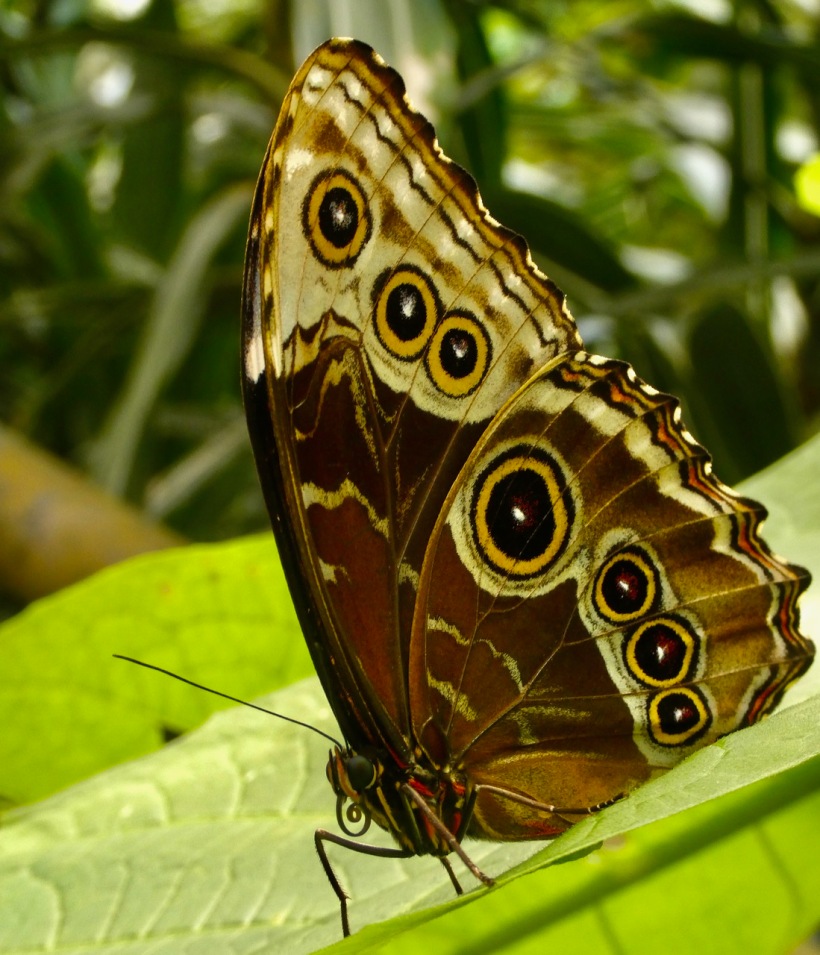 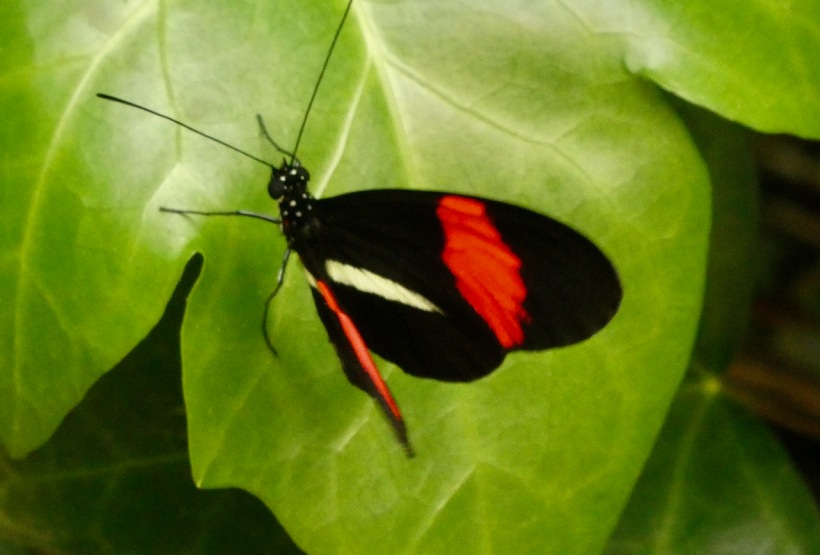 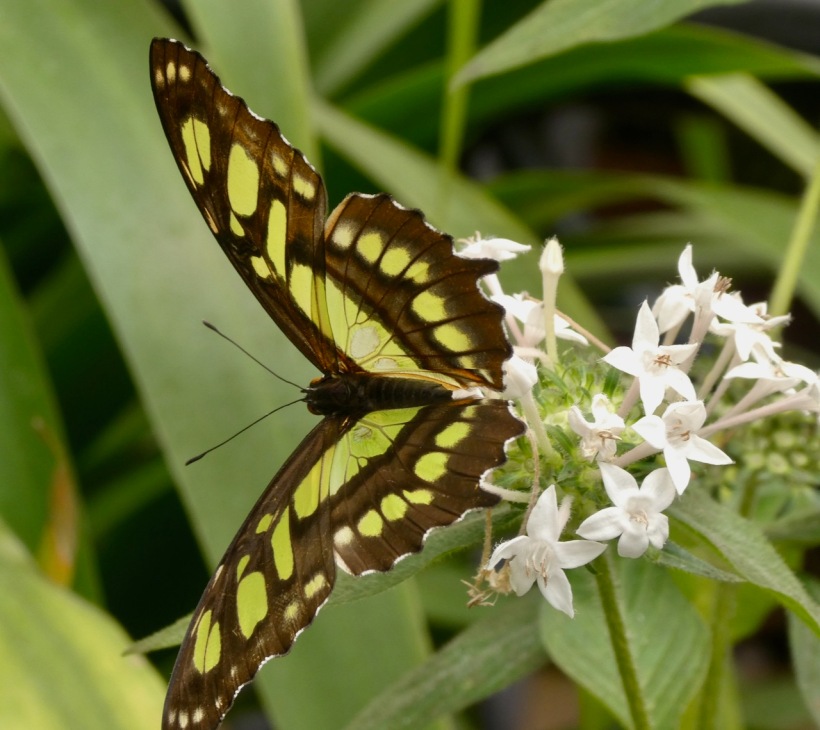 As we were leaving the butterfly area we saw an open door where a young man was putting butterflies onto people.  Of course we had to go in there.  The blue ones are Morpho butterflies. 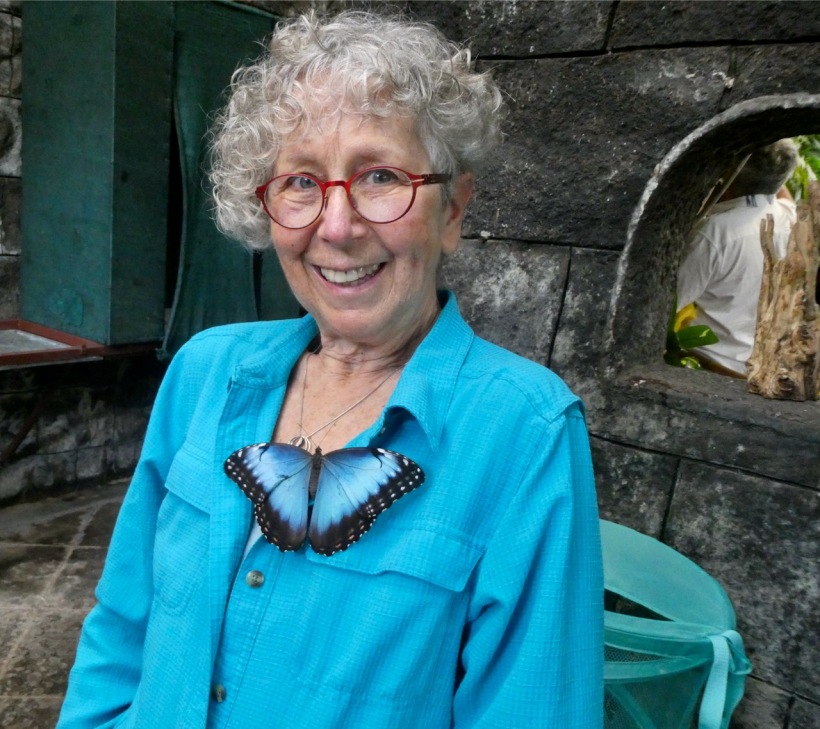 He also had a very large butterfly that he held in front of our faces as a mask. 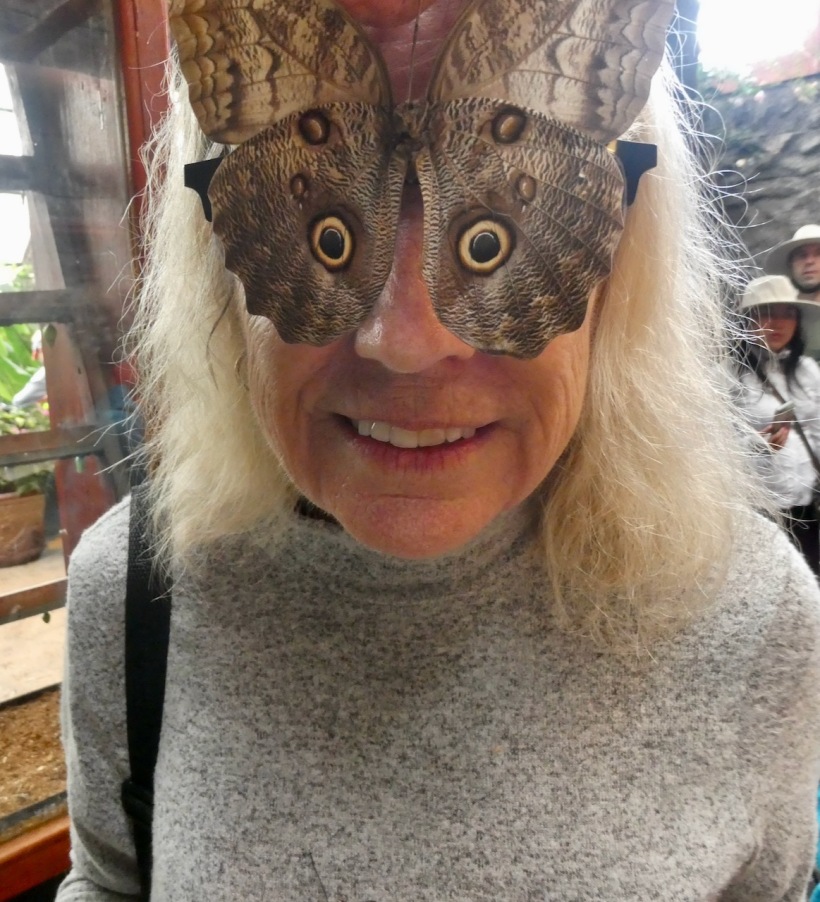 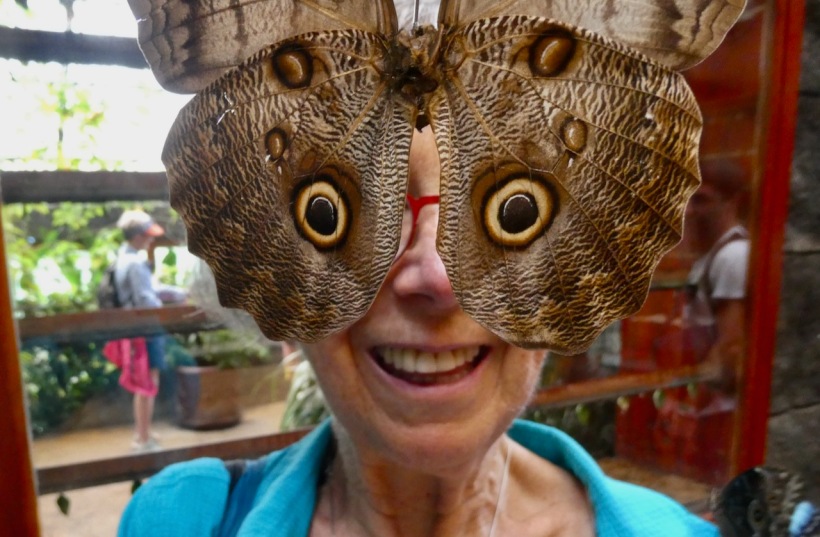 That was sure fun.

Next were the monkeys.

The humming birds were really fun to watch.  Barbara and I were both trying to capture a photo of a beautiful purple one but we were not successful.  It was easier to photograph them on the feeders but i preferred the ones in the tress. 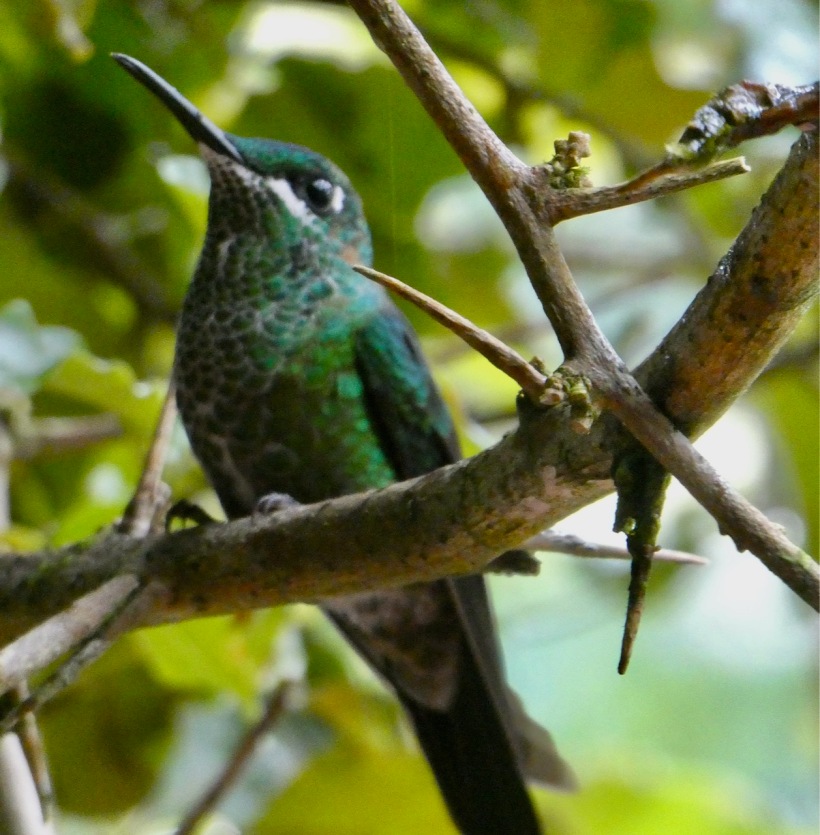 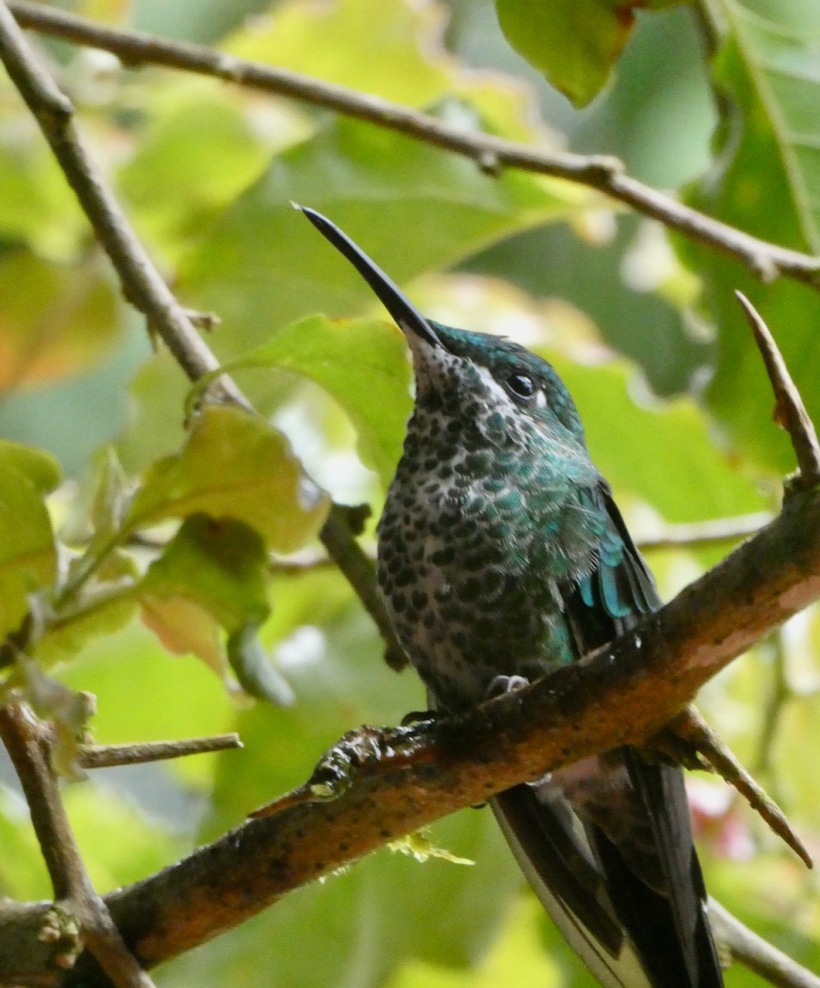 We missed the cats and strolled by the waterfalls which are quite beautiful in spit of my lack of getting beautiful beautiful photos of them.

Several Coati (called Pizote in Costa Rica) came walking down the path and crossed a bridge.  I was lucky enough to capture a photo of 3 of them. 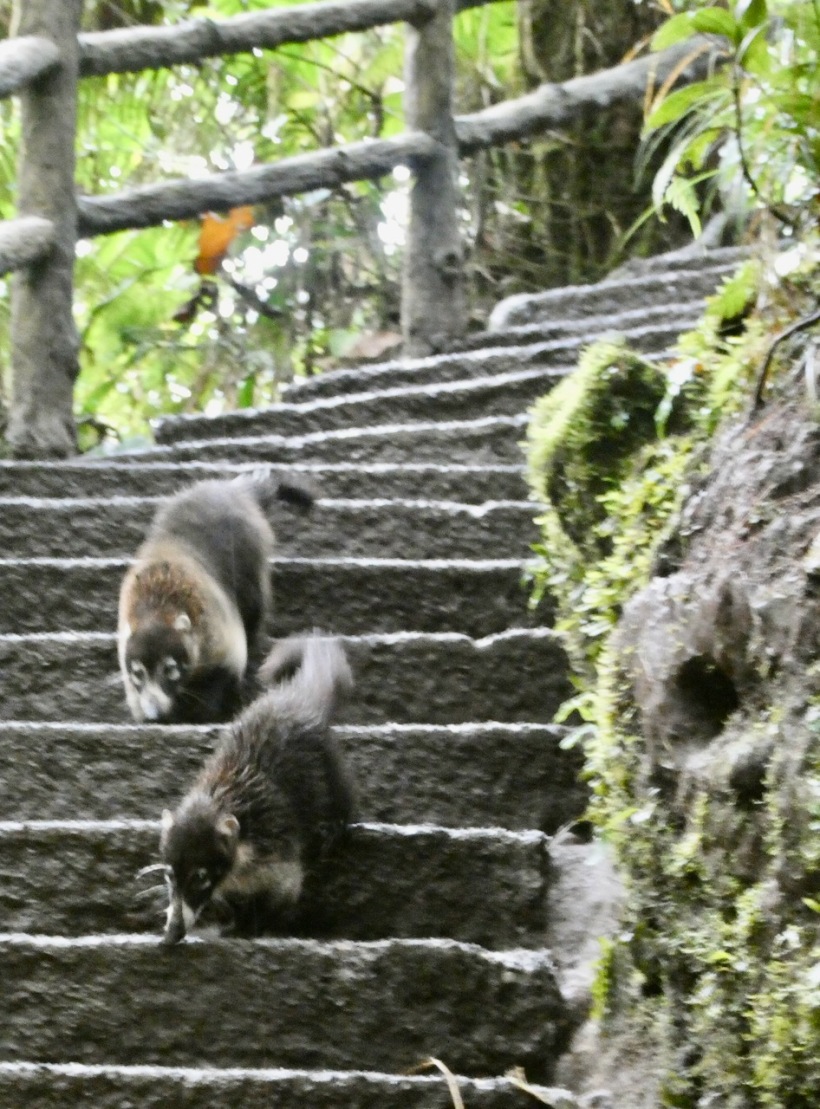 I remembered from Iguazu Falls.to stay clear of them because they can be very aggressive.

Janice suggested that we stop at a place on the way back to treat our Tico friends to an afternoon treat.  We stopped at a local bar.  I had a group photo taken… 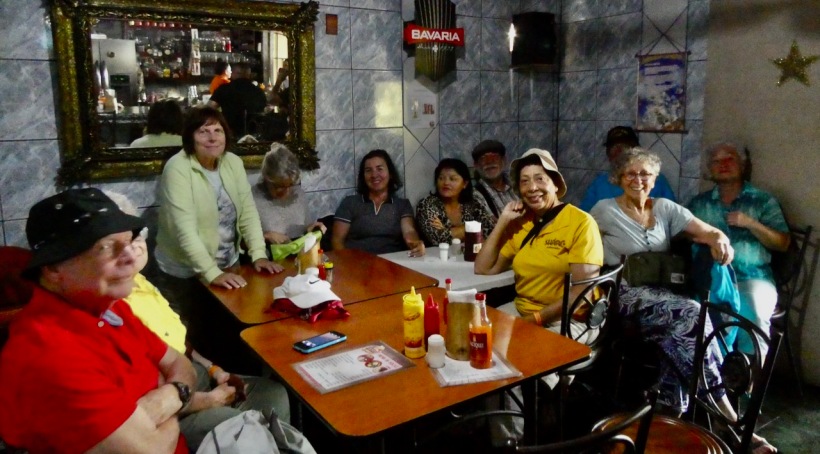 Several of us had Chivichi.  It was absolutely delicious. There was al lot of joking and laughing around the table both in Spanish and English and everybody had a great time.  Janice, Lee, Barbara and I split the bill.

On the way back to the house where Barbara was staying I realized that I was running out of data on the sim card on my phone and the one in the iPad was not working.  So Mario and Aurea took me to a store (and ATM to get colones and I added 5000.  That was most probably overkill because we only have 3 more days.  But at least I am sure I won’t run out.