I have some catching up to do on information from previous days before I start today’s blog.  I learned yesterday about Emilia’s job as a Federal Judge.  She actually had to travel to the country side to hear criminal cases and her travels were often by horseback.  That was quite the job.

Emilia’s house has hot water in the shower.  Yesterday was my first time in Costa Rica to get an actual hot – not tepid – shower.  That was a real treat.

Yesterday when we left Emilia’s house she was telling us that her father was a farmer they raised pigs andI I think chickens.  We passed some farms that were like hers.  Then we were driving by many houses.  She would point to a house and say, “Family of my Mother.”  I lost count of how many people were relatives of her mother.

Last night Emilia taught me how to upload WhatsApp to my desktop.  I never knew it was available on the computer.

I set my alarm for 5:45 last night so I could be ready for 6:00 breakfast.  After my shower Elize and I went downstairs but we didn’t see Emilia.  So Elize set the table for breakfast.  I knocked on Emilia’s door, but then I heard her shower so we knew she was awake.  Elize took rice and beans out of the fridge and Emilia  came downstairs; eggs got fried; and breakfast was quickly prepared.

We didn’t want to be late so we quickly ate and then I quickly washed the dishes and we were off.

Emilia drove to Elvie’s house (like we have done before) to go with Elvie and Sue to the bus.  We all got into Elvie’s car but we didn’t start driving.  There was a bit of panic in the front seat because Elvie could not find the gate opener so we couldn’t leave.  They looked and looked and finally found them.  Elvie had been sitting on them.  We were off to the bus and Emilia realized that she forgot her sombrero.  Elise and I had both seen both of her sombreros in the house before we rushed out the door, but none of us remembered to take one of them.   This was quite the start of a day for us.

The bus ride to the playa was pretty long. but not as long as on Saturday.   I was wishing that I brought my knitting because I was also thinking about how long we were going to be at the playa.  The countryside is very beautiful.  I looked at the beautiful countryside, listened to the conversations in Spanish, and realized that one of the things I enjoyed the most about this group is the delightful laughter of Emilia and Eliza.

Our destination for the day was  Playa Ventanas.  Ann explained to me that ventanas means windows. When we arrived we put our gear under a large tarp that the support Ticos team from Peréz Zeledón had set up for us.  We took a walk to the rock formations where there was a window to the ocean.

The water comes rushing through the window in this rock formation.  We learned that people who are not thinking clearly have walked through this formation at low tide and drowned because couldn’t get out when the tide came in.  We took photos of each other.

Emilia and Quiro set up a couple of hammocks.

I tried out the hammock.

I walked back over to the tented area.  The Peréz Zeledon support Ticos were preparing a snack for us. 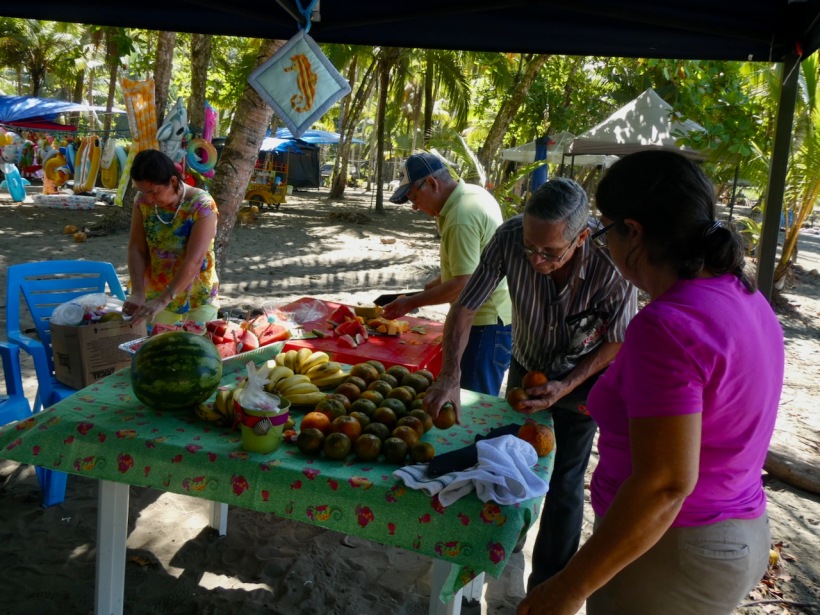 This is quite the knife for cutting-up cantaloupe. 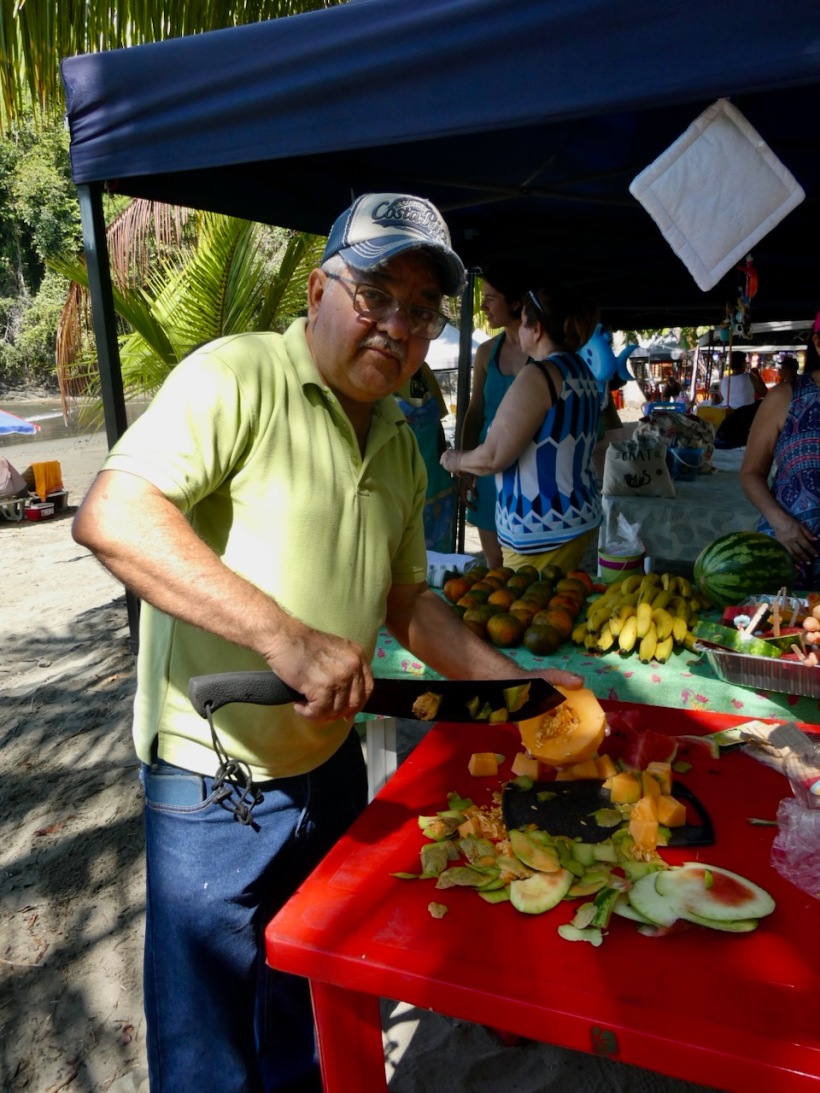 They put out quite the decorative spread of fruit.

It was time to test out the water.  What a pleasant surprise to step into very warm water.  Sue, Ann, Lee, Elise, and I had a blast playing in the waves.  We would turn our back to each wave and let it push us up into the air and back down to the water.  I haven’t done that in over 30 years.  What a blast.

Sue and I took a short walk down the beach to some rocks and took photos. 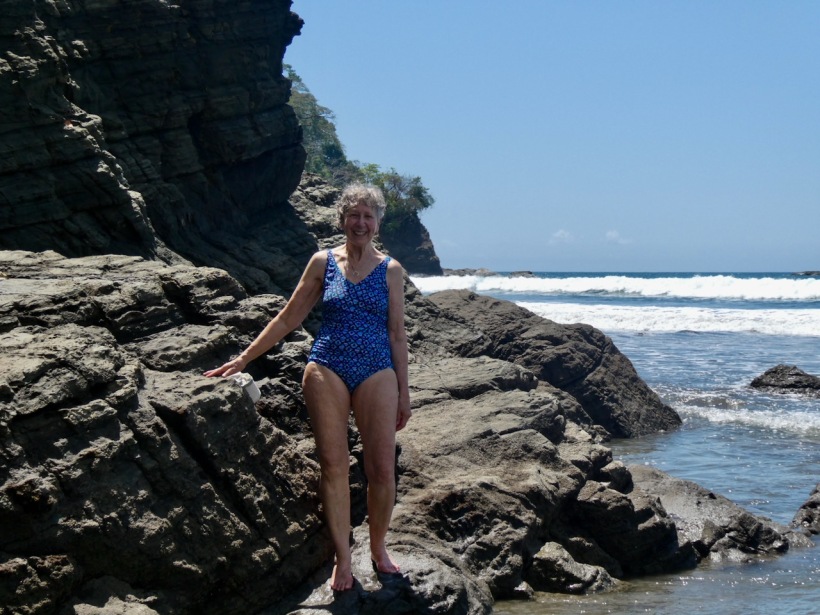 This is a photo of our covered area where we can stay out of the sun.

Before long it was time for lunch.  The Ticos prepared everything at the beach.

I was really expecting to get a bit bored being at the beach for so long, but we were having a lot of fun just talking with each other and walking on the beach.  The treats kept coming.  They prepared an icy drink that was quite sweet.

I took a few more photos.

I shared my blog with Omar on his phone and he was really enjoying reading it.  It is in Spanish on the phone but maybe he just enjoyed the photos.

Then Eliza came to tell me that it was time for me to come hear the singing. Quiro was playing the guitar and it was a regular sing-a-long – in Spanish..

I took a video and posted it on my Facebook page.

One thing I noticed was that it was all hombres sitting around the table singing together.  I asked about that and learned that in Costa Rica, it is mostly the men who sing together.

Francisco showed me a card trick.

A couple from Canada asked Quiro to sing a song to the woman.  Omar helped him sing a song about a pretty woman.

Then the Canadian woman sang a song for us.

Quiro wanted to hear “A Bicycle Built for Two” sung to him and his wife so we sang it for them.

The day went much quicker than I expected.  Since the sun was going to go down over a hill, they decided to drive us to another spot on a beach to watch it.

I took a photo of Omar and Eliza … 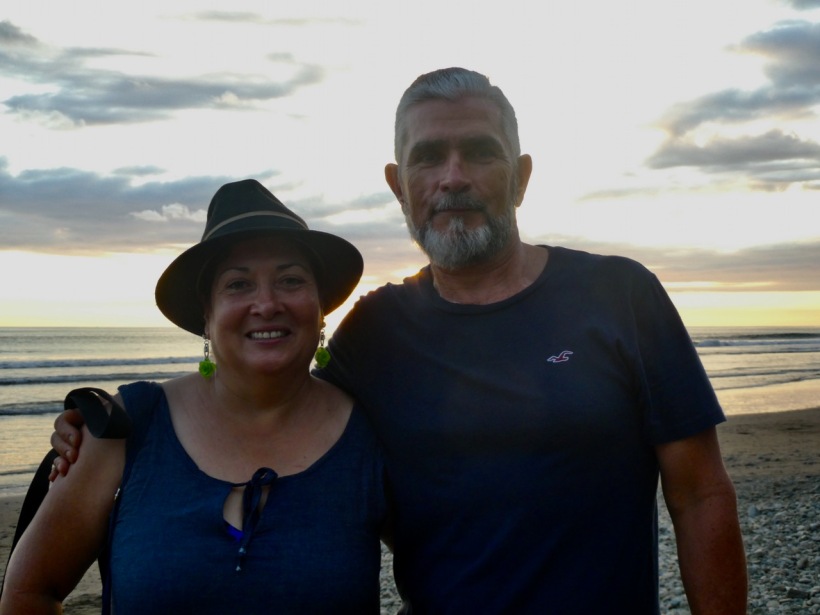 … and took a shot of the sunset myself.

This was a much better day than I had expected.

We had a laugh when the bus arrived in Pérez Zeledon.  The bus stopped for the 1sts group to get off near their homes.  Elvie got off the bus so obviously Sue followed her.  Then I tapped Emilie on the shoulder and pointed to Sue because we were riding in their car and I didn’t understand why we weren’t getting off at this place with them.  Emilie called out Sue’s name and told her to get back on the bus.  It turned out that Elvie was just going to get her car because she had parked it at somebody else’s house.  We all laughed about the the confusion.  The Ticos had this all arrangement all down pat, but Sue and I did not understand.

When we arrived home, I had another great hot shower.  Emilia put all of the clothes I had worn over the past couple of weeks into the washing machine and wow – there is even a dryer so they will be all dry and ready by the end of the evening.

Emilia made pasta for dinner.  Then a couple friends (Liner and Les)came over. I was uploading photos for this post.  There was a lot of Spanish and some French conversation.  I was included in some of the jokes.  Emilia brought out the cacao; Pablo brought out candy; Emilia brought out cake; I brought out Carmel M&Ms that I have had in my pack (unopened) since we left LA.  We  laughed a lot. 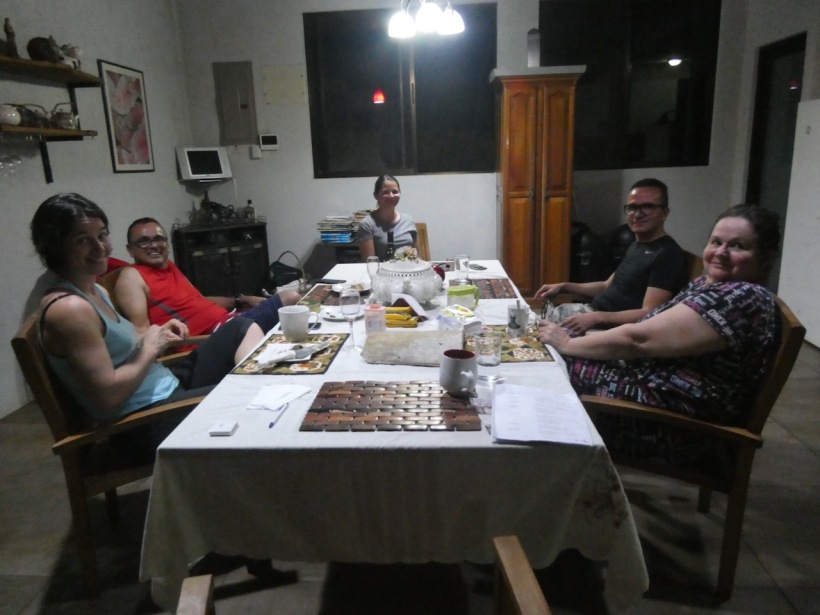 It is the end of another great day.