This morning I took a selfie of Dunia and me to send to Vilma. 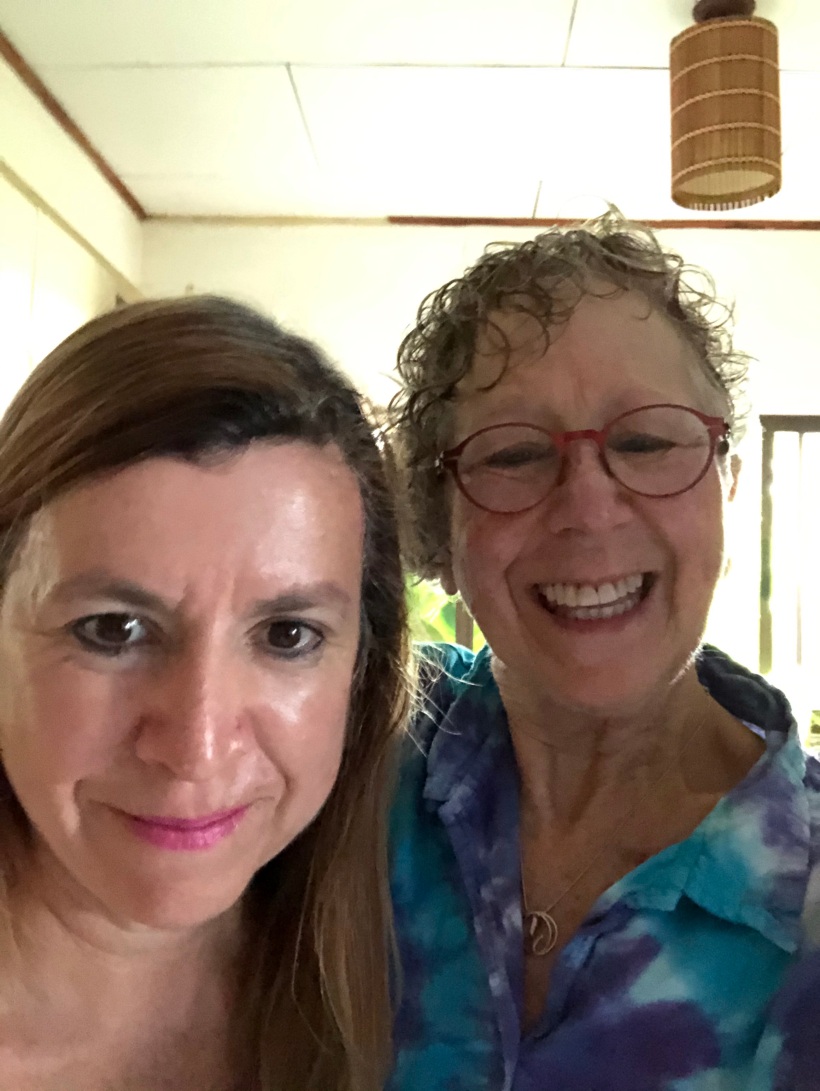 Vilma and I are communicating via WhatsApp almost every day.

Today was our last day with Dunia and Ruben.  We had a slight snack and tea because we knew we would be stopping for breakfast on the way to Pérez Zeldón.

I have had a wonderful time with them.  Dunia gave lollipops to Barbara and me for Valentine’s Day so we took another selfie. 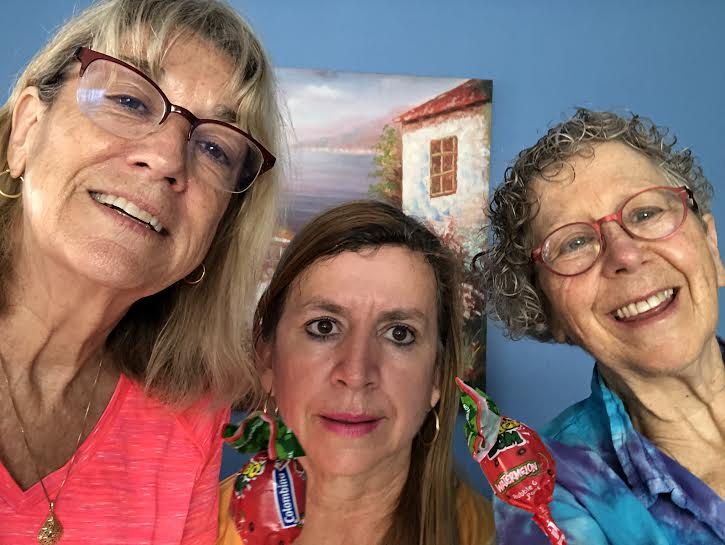 Ruben also took a final photo for us. 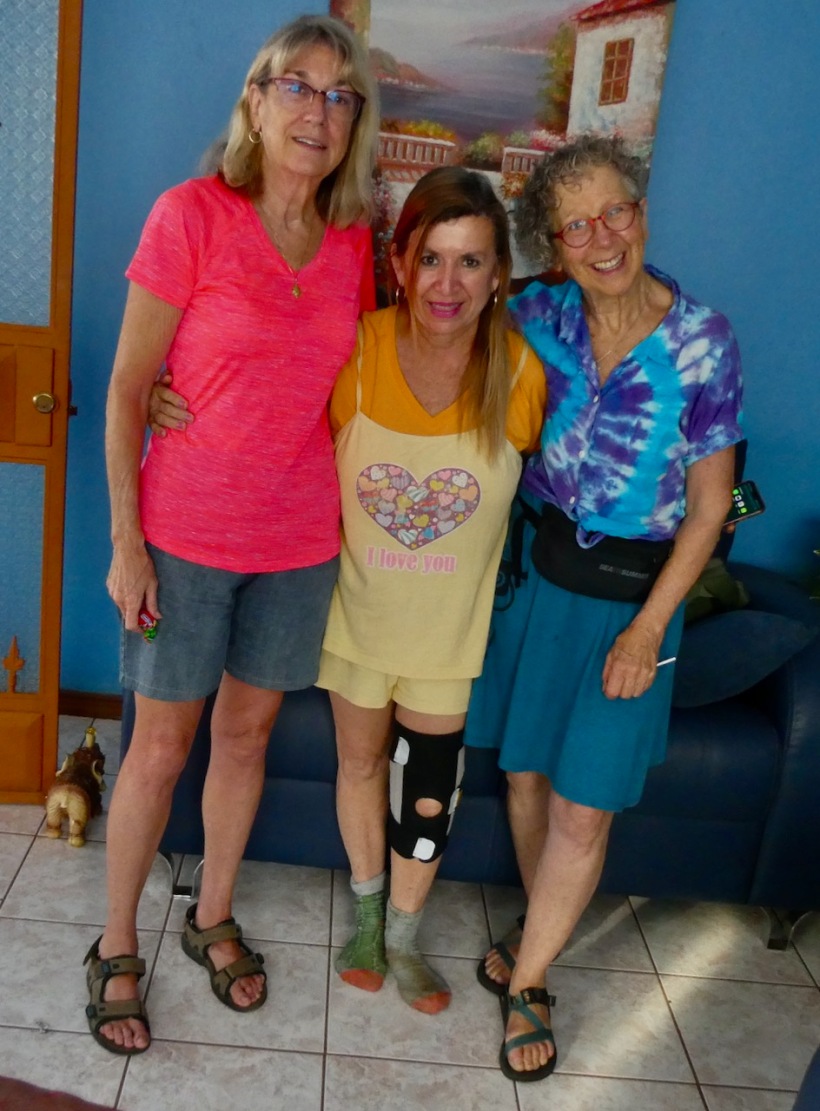 Vilma took a photo of Barbara, Ruben and me. 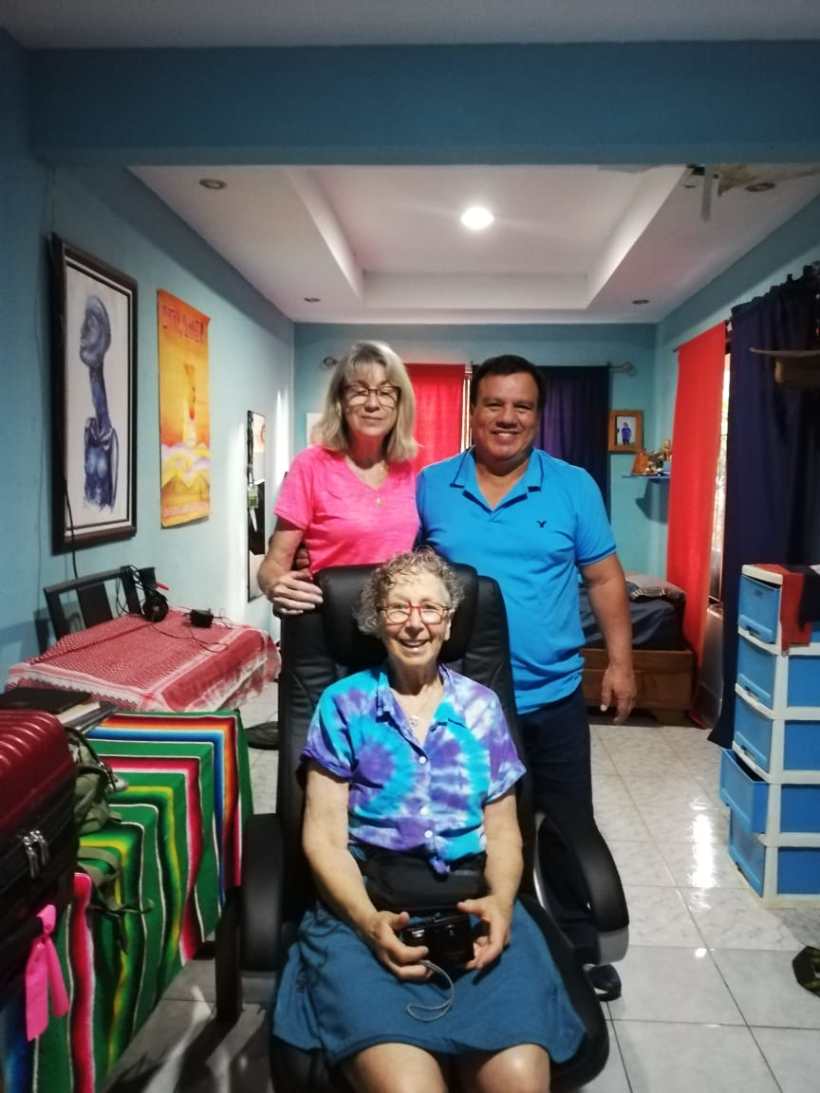 We road in a much bigger bus today,  There was plenty of room for all 15 of us (9 Ticos and 6 Oregonians).  Dunia was not able to go with us because it would have been hard on her leg to sit for that long. Of course we started out with a prayer.  The singing continued with the Ticos singing many songs of prayers and friendship.  We also sang several songs for them.  There was much laughter and fun happening on the bus.  One of the songs we sang was “We Shall Overcome.”  I was surprised by how emotional I felt singing that song.  We sure need to overcome what is happening in the world today and for us, especially in the U.S..

We stopped at a bay for a picnic breakfast. that the hosts prepared for us. 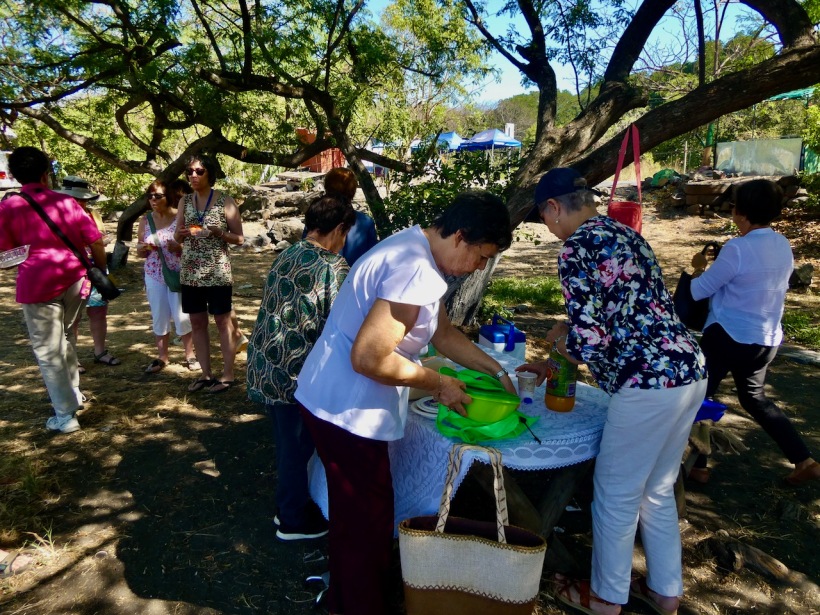 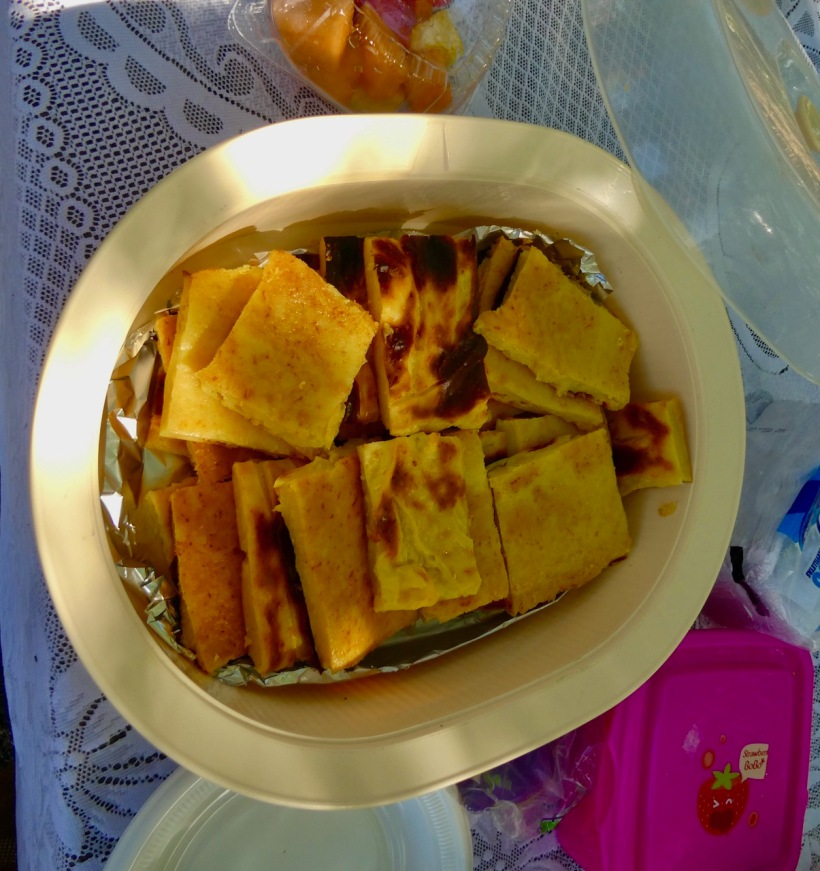 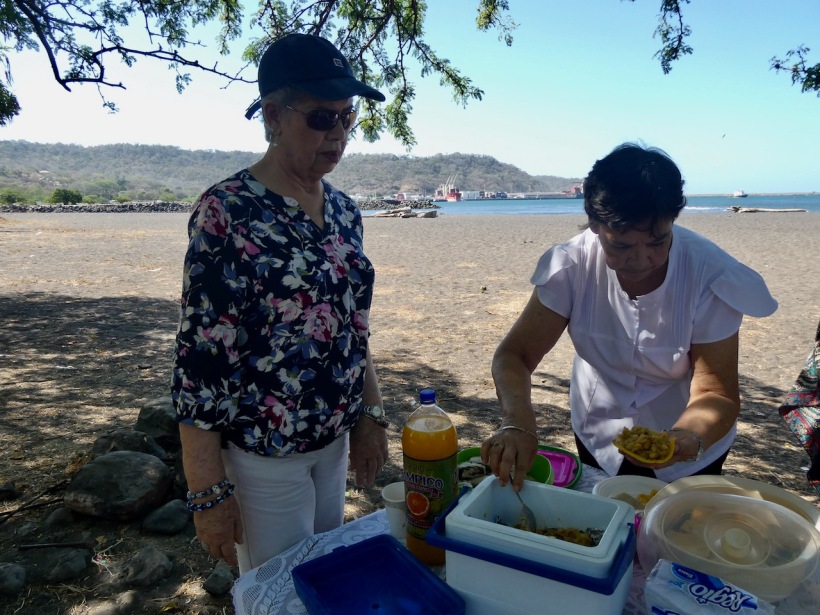 After more traveling, we stopped walk over a bridge to see Crocodiles. I saw this waterfowl but am not sure what kind it is. 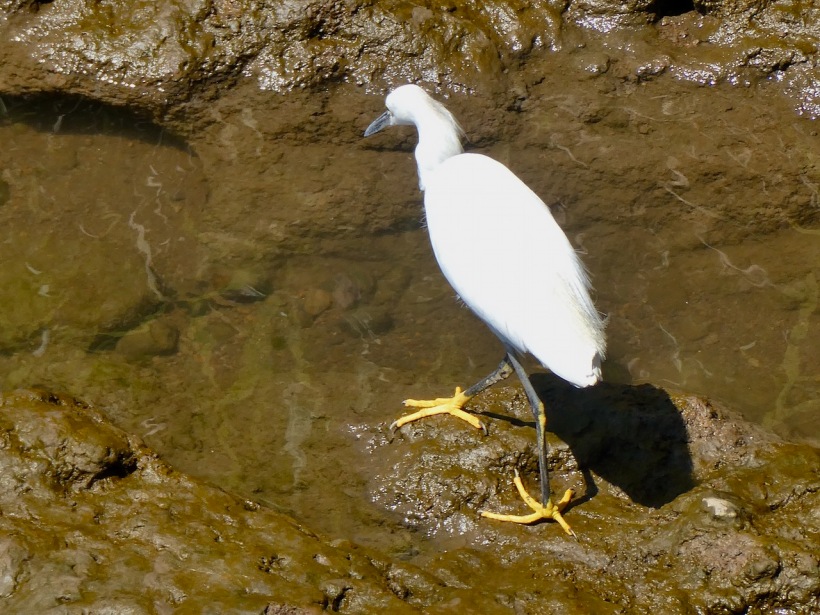 In the field across form the crocodiles there were a couple of people picking melons. 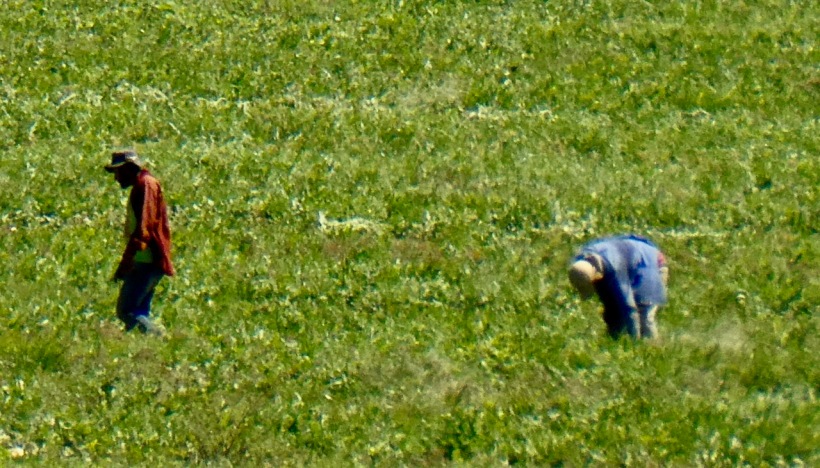 Lee told me that these pods are from an Carua tree.  They use the pods to sooth glands or sore throats. 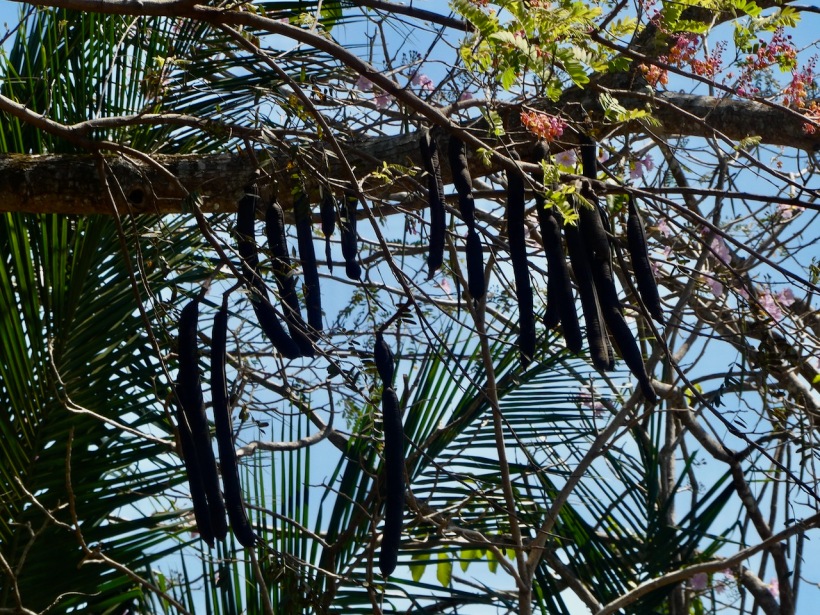 The time had passed quickly with knitting and conversation with Ann. I though the six hours in the bus was going to feel like a very, very long time but before I knew it, we were at our destination.

At first when we stopped, I thought it was just another rest stop but the Ticos from Pérez Zeledón were there to greet us.  We were at Dominical Beach.  We said goodbye to the Ticos from Tilarán with hugs and kisses and greeted out new hosts. We are now in the province of San José. 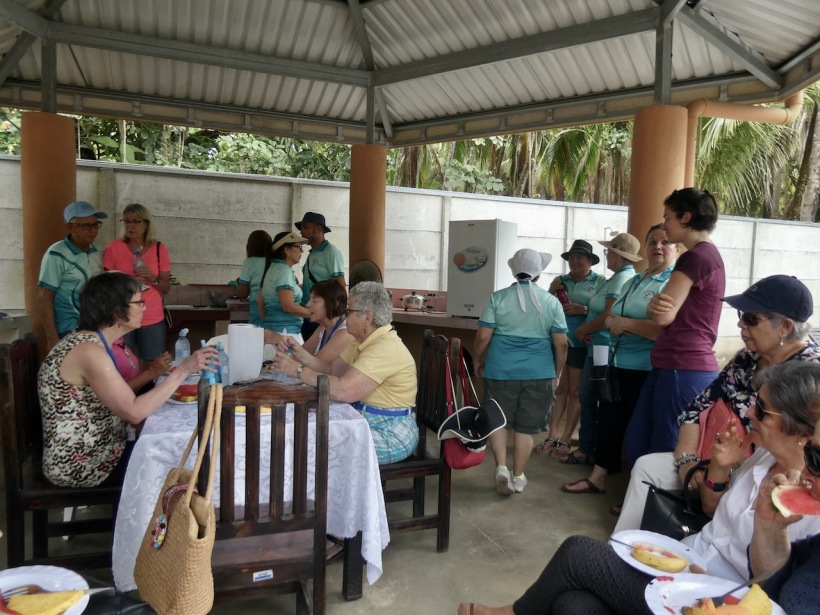 I met my host, Emilia.  I also met Elise who is a lovely French woman who is also staying at Emilia’s home.  Elise is here to find volunteer work in Costa Rica.

The Ticos were preparing a delicious lunch for us. 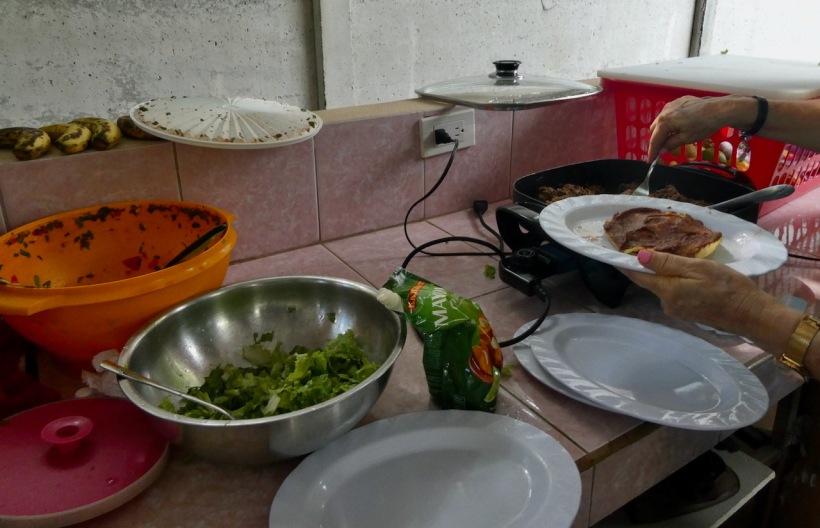 And we received a gift of chocolate. 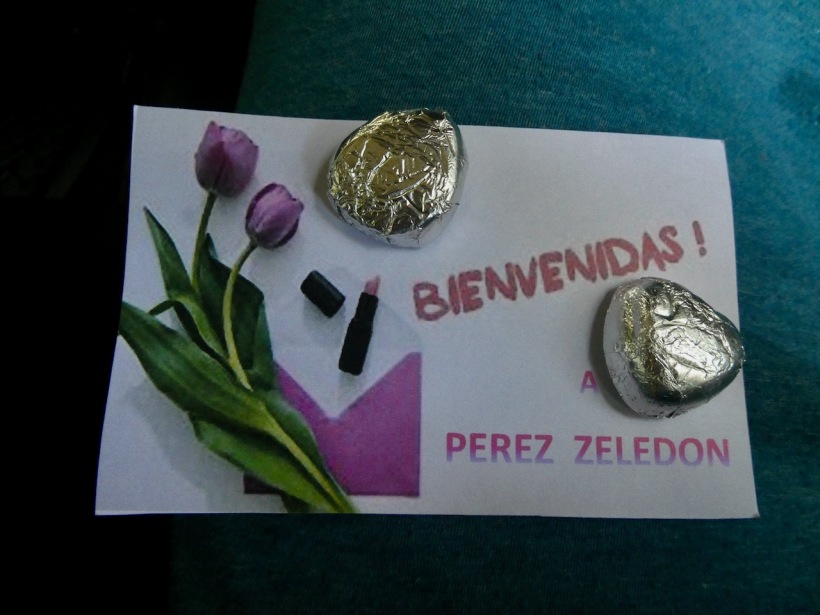 The Oregonians from Sun River already knew some of the Ticos from Pérez Zeledon and it was so much fun to see their joy as they greeted each other. I was sure this was going to be a very fun group.

Emilia drove Elise and I to her home.  Abraham (the son of a friend of Emilia) also road with us.  He and I sat in the back seat and we talked.  He was practicing his English. Emilia dropped Abraham off in town.

As we approached Emilia’s home, Elsie said we would be going into the woods.  We drove up a dirt road and were surrounded by forests. When we arrived at the house, I had a great surprise.  We were in the middle of the forest in an absolutely beautiful home.  My photos hardly do it justice.

Here is the kitchen… 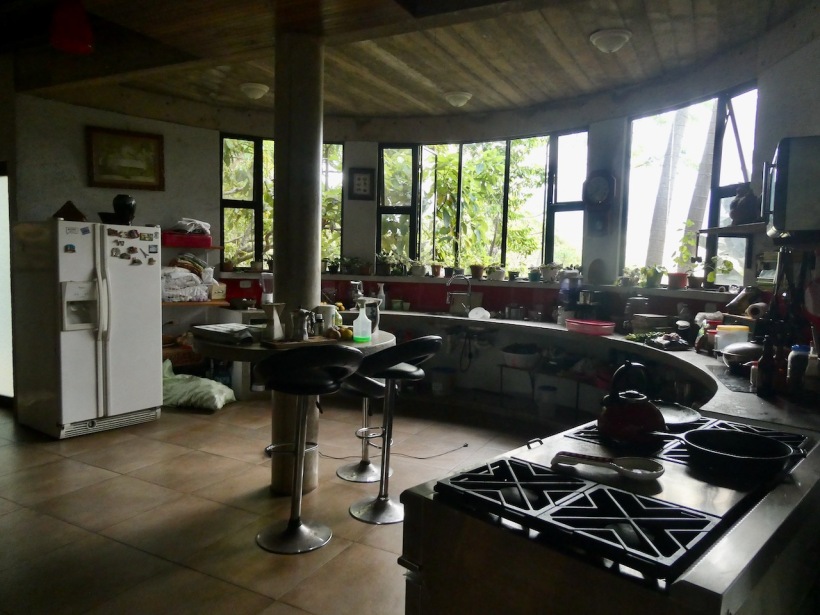 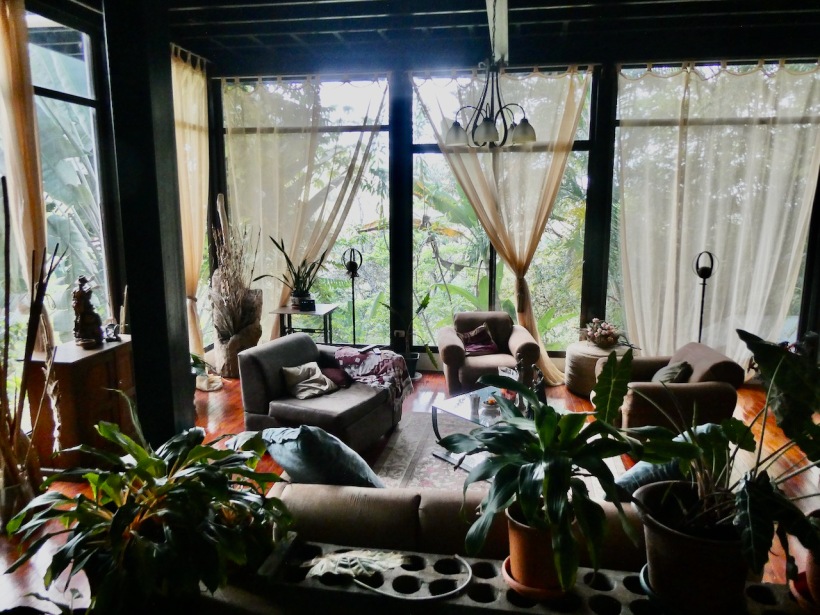 … and dining area in the kitchen. 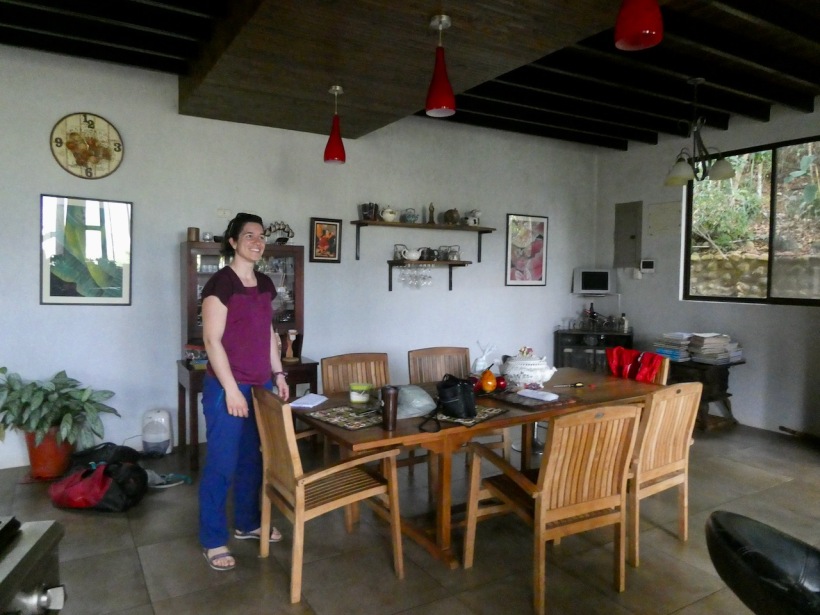 Emilia asked me if I wanted coconut water and I said that plain water would be fine.  I had no idea that she meant straight from the coconut. 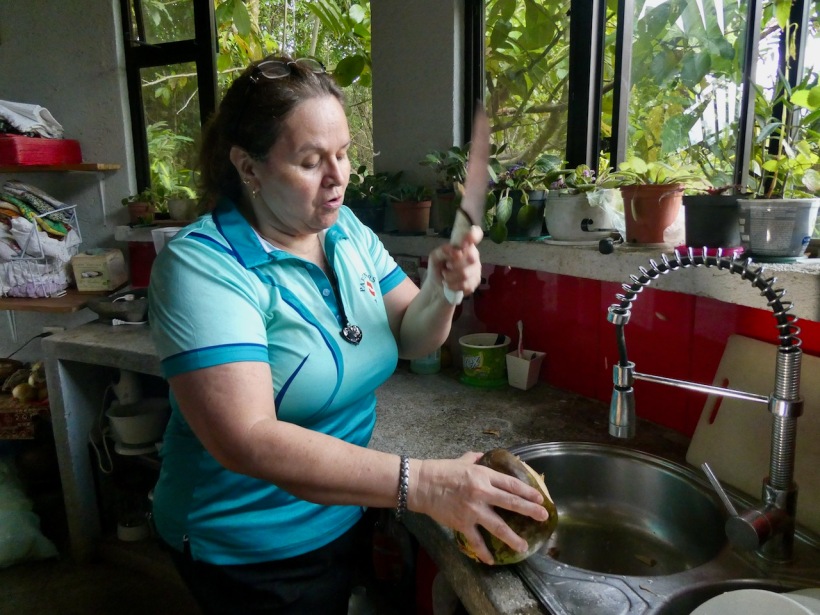 Here are Emilia and Elise with  Elise’s  coconut… 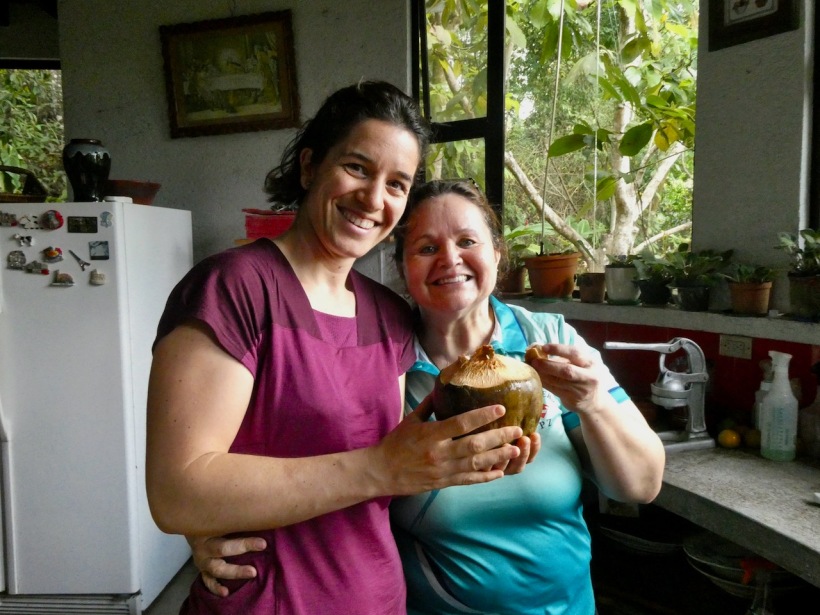 … and Elise and I enjoying ours. 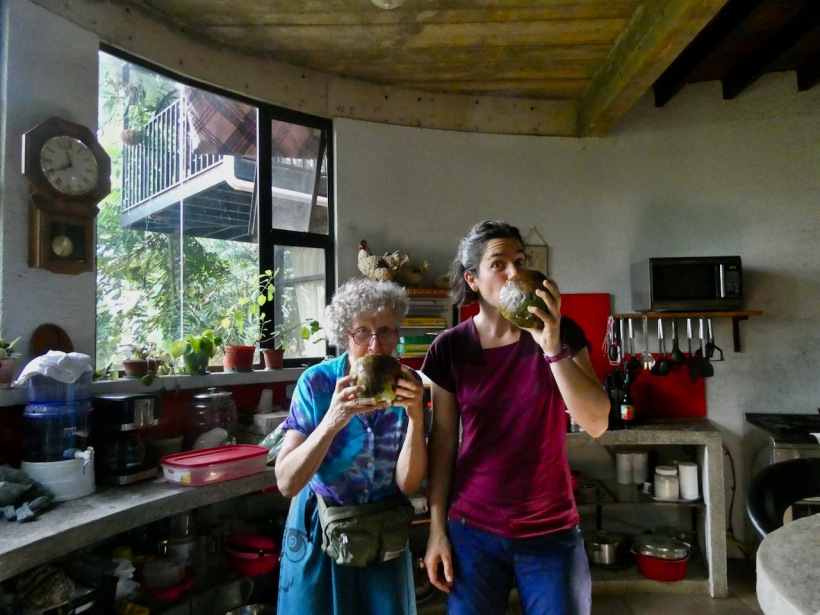 We took our drinks upstairs to enjoy them on the upstair’s outdoor area.

I was still feeling amazement about where I was going to be staying for the next 5 nights. This is my bedroom. 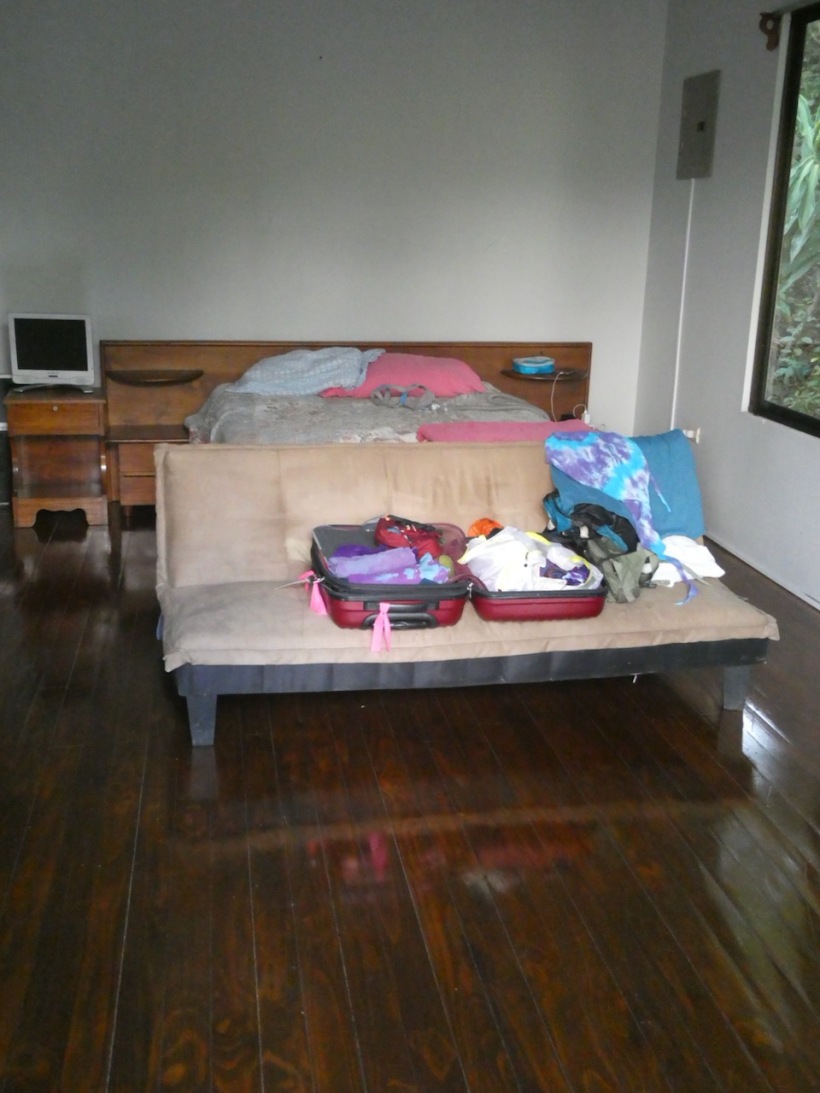 … and the door to outside from my bedroom… 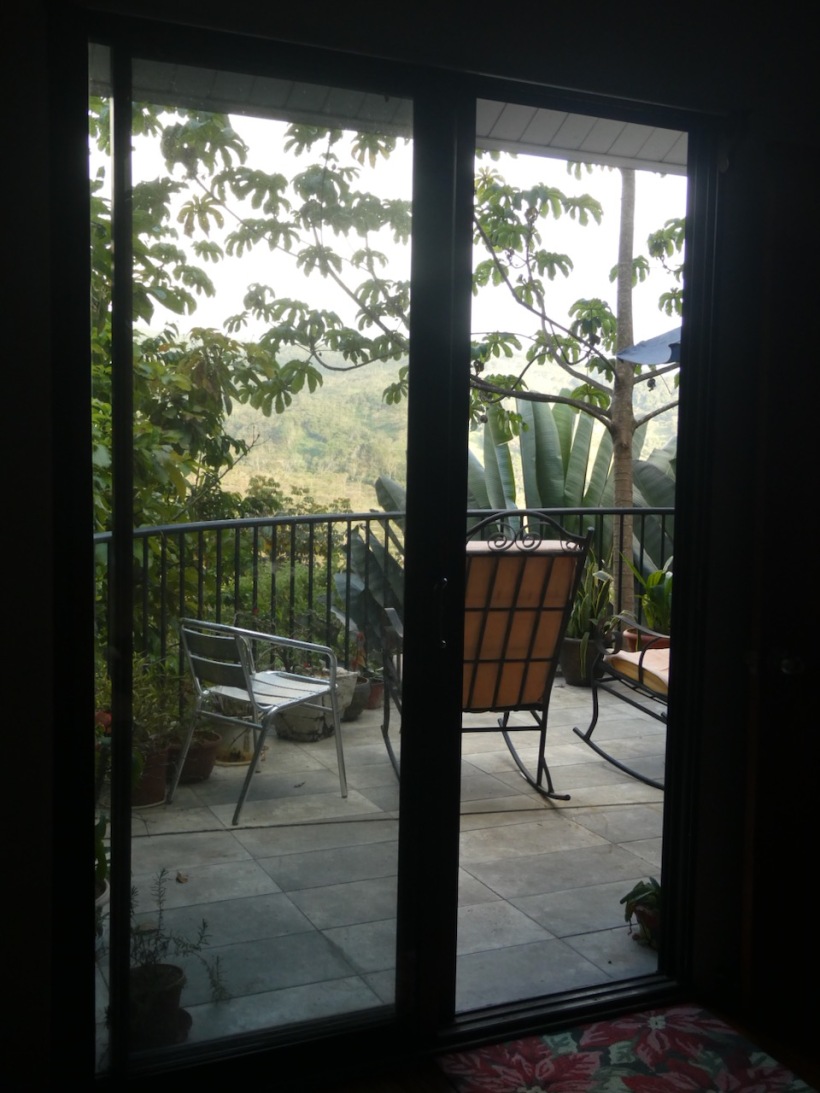 … and the outside deck… 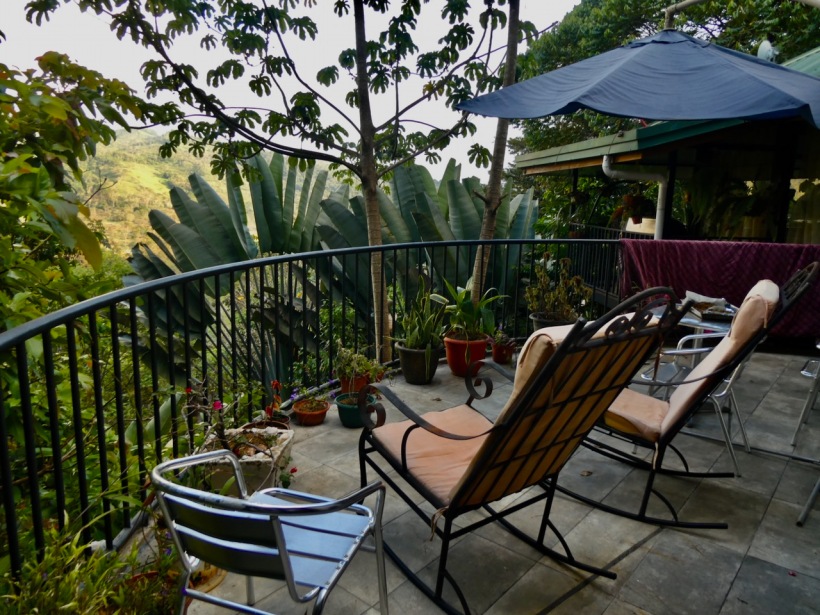 … and the huge plant in front of the deck… 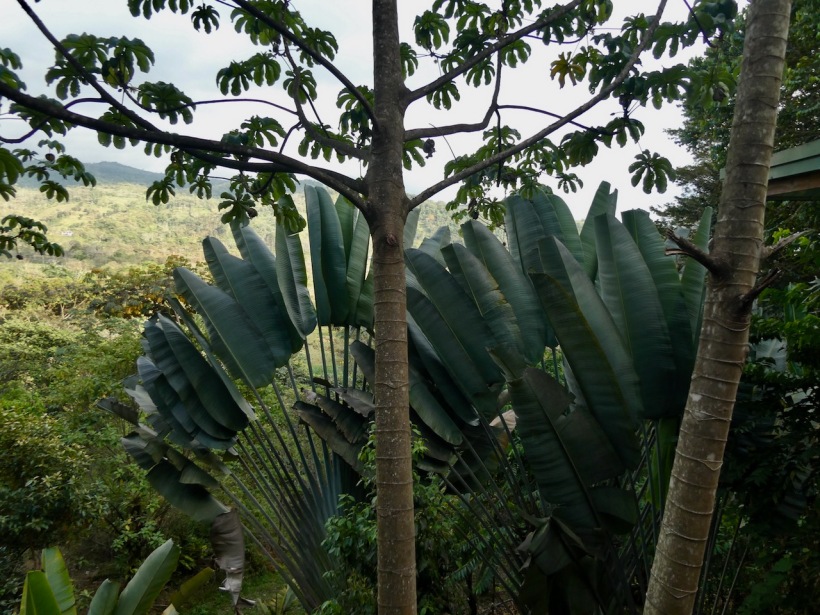 Emilia showed me how to get the coconut meat from the side of the coconut to eat it.  When I was younger, I did not enjoy coconut water or raw coconut, but I did enjoy it today.

Well the day was not over.  We left for the welcoming party which was at the home of Carlos Gonzalez.  We stopped on the way for Emilia to buy fruit for our breakfast.  Our conversations in the car going between Spanish and French and English were quite interesting.  Now I have put two translation sites on my phone.  Elise knows some Spanish but I am trying my best to have direct conversations with both of them.

I have been having some thoughts about language.  I really wish I knew how to understand and speak Spanish.  DuoLingo helped a bit but I have never been good at languages.  Sometimes I just feel ignorant.  Over the last 12 days, our Spanish speaking Oregonians (Lee, Ann, Janice and Barbara) have been doing quite a bit of translating.  Daniel and Gabriel were helpful to me in Liberia yet I did great with Vilma and Sergio using my phone. Actually Vilma and I are communicating through WhatsApp every day and I use the translating site. for that.  Barbara did a fantastic job of translating when we were alone with Dunia or her husband, Ruben.  And because she was with me, I received much more information from Dunia and Ruben than I would have alone.  It was a lot of work for her to be translating all of the time and I really appreciated that.  Yet, I realized that I really enjoy the intimate work the Ticos and I do having one on one conversations using the website translator and I feel closer to the people.  So what is best is a dilemma.

Emilia stopped at the store for fruit for our breakfast on the way to the store. 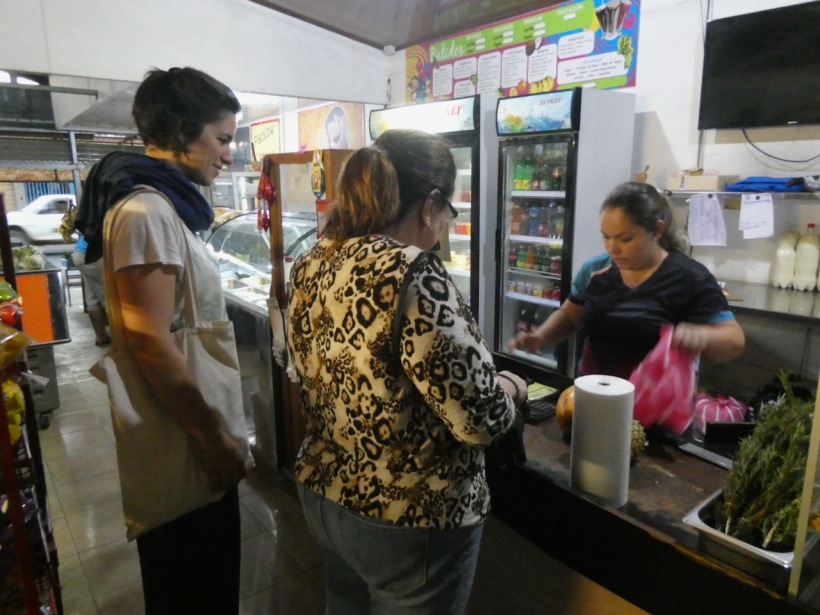 When we arrived at the welcome party, Sue told me that the party had been happening for a long time.  I was sorry that we were late although my afternoon with Elise at Emilia’s was wonderful.

At the party the had a big welcome sign for us. 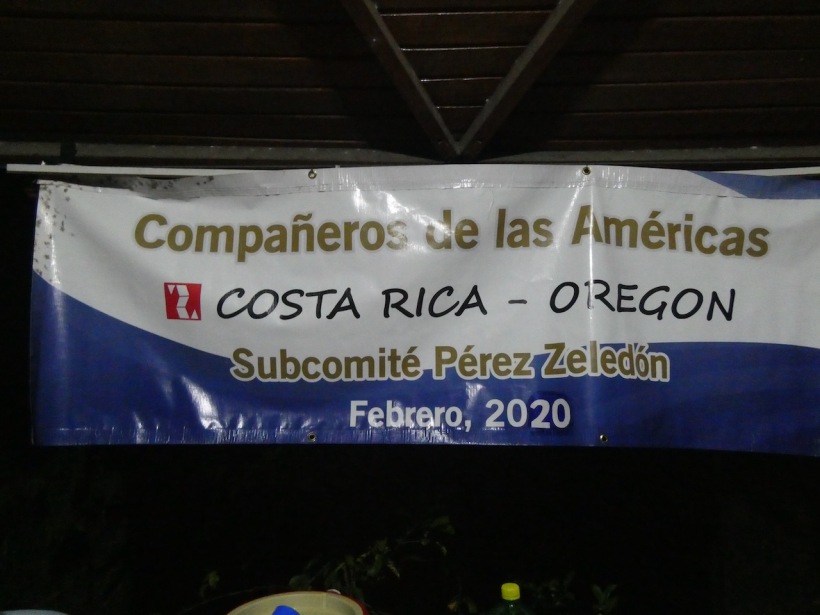 Many of us were singing together. 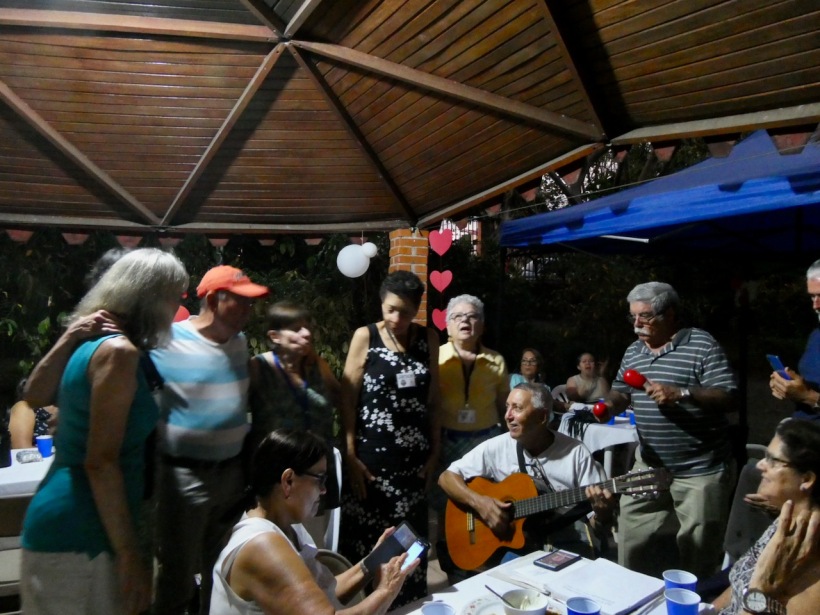 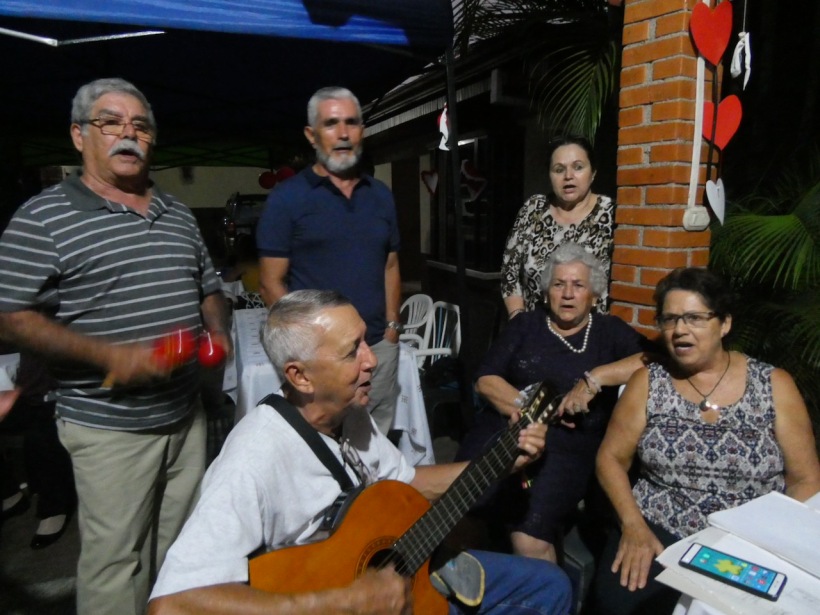 We were served another wonderful meal. Just as we were about to eat, Emilia received a phone call and walked away from the table.  It turns out that she had parked the car in front of somebody’s gate. When Elise was telling me about it, I thought somebody had broken her gate.  But it turns out that the police called her to move her car.  If I understood correctly, they did not tow her car away or ticket her car.  The actually called her on the phone to get her to move.

Back at Emilia’s house I started to do this blog post.  Emilia was showing photographs for Elise and preparing food for our breakfast. 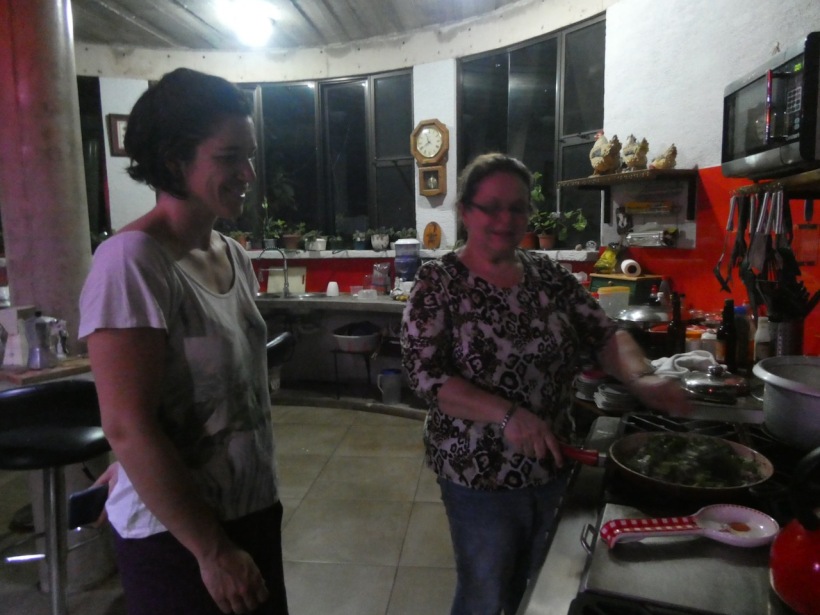 I learned that Emilia and Elise had prepared Cacao either earlier today or in the days before today.  It is straight cacao so without any sweetener.  This is one block of it but there were several of these…. 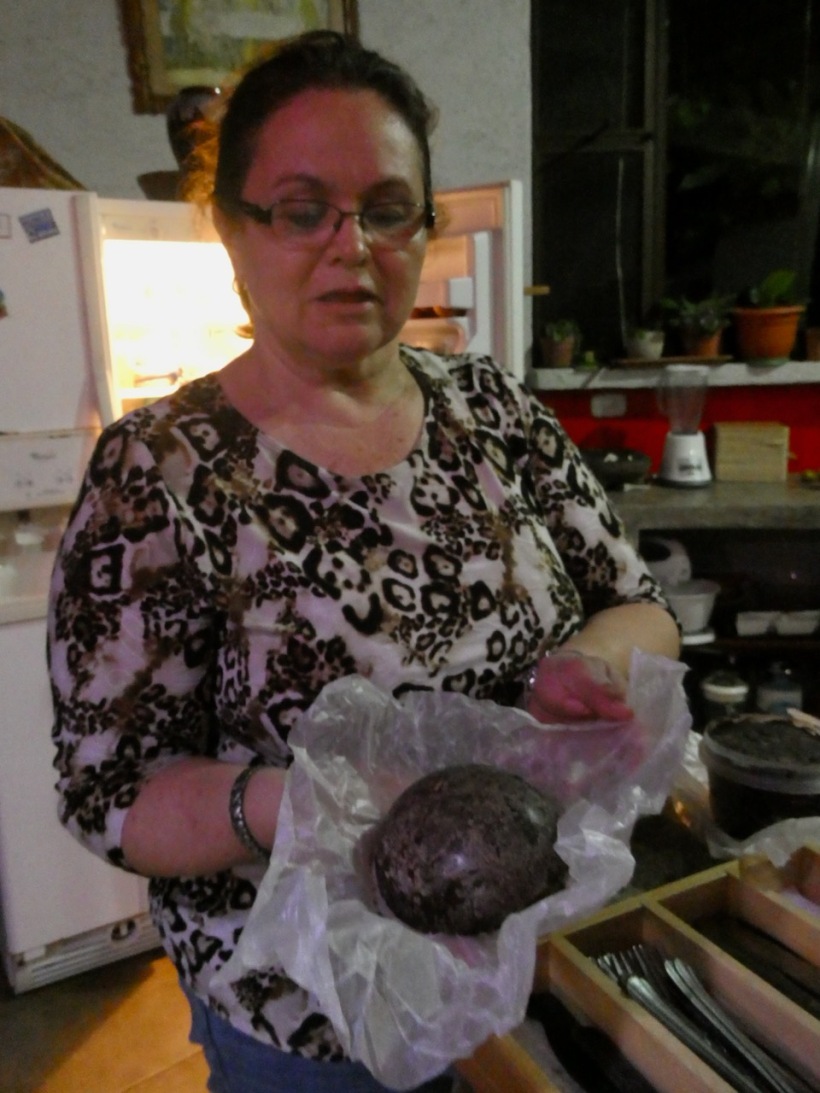 … that Emilia stored in the refrigerator.  It will be interesting to see what she makes with them.

I am off to bed because I have to awake at 6:00.  We have a busy day tomorrow and Iam looking forward to another adventure.