What a morning at Dunia’s home.  When I woke up, Duñnia asked me to put my blog onto her computer.  We were waiting for the computer to boot-up and she asked me how I was feeling.  I typed onto my phone in the translating site that I was doing well and would be doing better after an hour because the sciatica hurts the most when I am sleeping and for the first hour after I wake up.  She immediately took me into her bed room and insisted that I lie down so she could give me a massage.  She rubbed something onto my leg and back.  After that she took me to her massage chair, told me to sit there, took my phone away, turned on the massager, and told me to relax.  Then she sat on her bed and was studying English on Duolingo.  I don’t know how long I was there because I fell asleep.  Next she took be back to the bed and placed magnets on my body and in my hands and I laid there while she made breakfast.  Then she send Barbara to slowly take off the magnets and I we had breakfast.  I was absolutely stunned. Dunia is an amazing, kind, and caring person.

We quickly ate breakfast and walked a few blocks int Cañas to meet our mini-bus.  Our first stop was in Bagaces.  Bagaces is one of the oldest settlements in early Spanish conquest in the 1540s, where natives lived by a creek. It became an important town after 1601 when the “Mule Trail” was established communicating Cartago, the capital of the province, with Guatemala, the capital of the Captaincy General. Bagaces was a necessary night stop and later acquired fame because of its dry bisquist (Biscocho) and cheese (Queso Bagaces), an important supply for the long ride. It was first mentioned as a canton in a decree dated December 7, 1848.

Bagaces takes its name from a renowned Indian tribal elder, Chief Bagatzi, who was ruler of the area when the Spanish arrived in the 16th century.  There is a statue of him in the Eolic park. 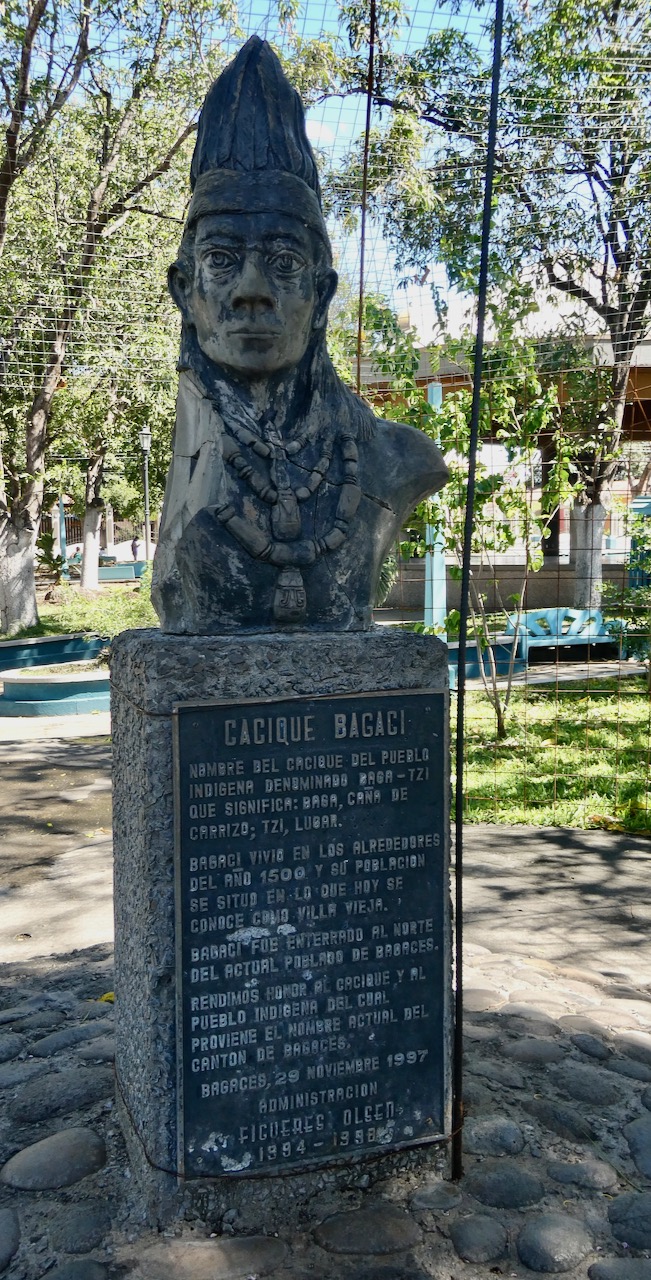 Bagaces is perhaps best known as the home of the headquarters for the Area de Conservacion Tempisque.  It is one of the country’s most active and dedicated conservation organizations. This group is responsible for administrative oversight of the nearby Palo Verde National Park, as well as the Lomas de Barbudal Biological Reserve.  The ACT works tirelessly to ensure that the land is maintained and protected, and that the thousands of species that inhabit the parks can be enjoyed by future generations.

We spent some time waling around the park and relaxing. 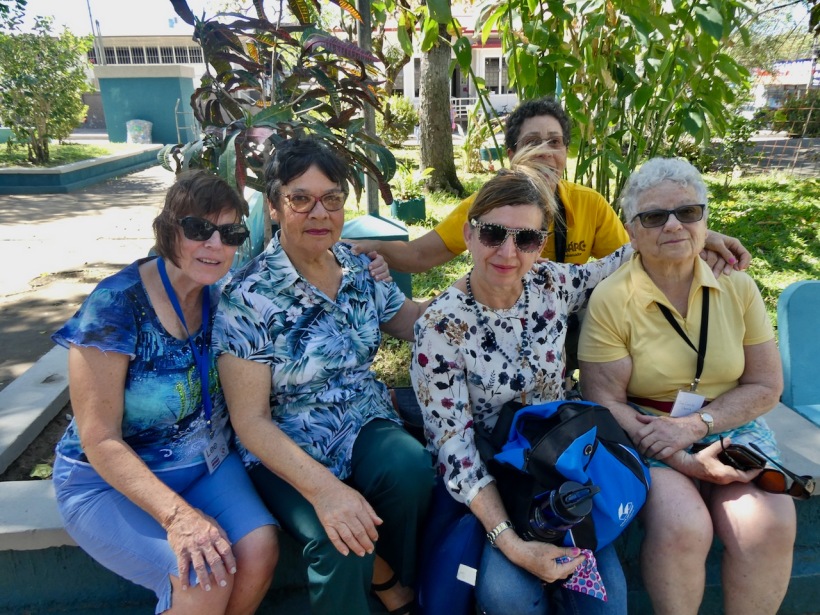 Then we walked to place that is both a home and a museum.  This is the sign in the front of the house which is actually in the middle of businesses.

The sign means, The window of the Cholo (what women are called in Guanacasta) where flavor and culture come together.

For 26 years Maria de los Angeles Jiminez Martinez.  She is the most famous storyteller and reciter of retahilas or traditional rhyming verses, in all of Guanacaste: Marielos Jiménez, known as “La Chola.” And she, in turn, is a living harbor of thousands of stories, old-fashioned words, coal irons, and puffy, handmade tortillas – “because if it doesn’t puff up, it’s not a tortilla.”

María de los Ángeles Jiménez Martínez is a strong, stocky figure with an apron and permanently affixed hat, whom everyone in the village knows as  Marielos Jimenez, “La Chola de Bagaces” because that’s how she signs off when telling her stories. “A chola is a hardworking woman. People say, ‘Look at that chola! My lord!’

In the entry there are many, many posters and stories hung from the wall.  Many of the posters have  Guanacastecan names to force people to remember them. One of the women showed me this ancient instrument that is depicted in one of the poster.

I photographed this sign as we entered the home. 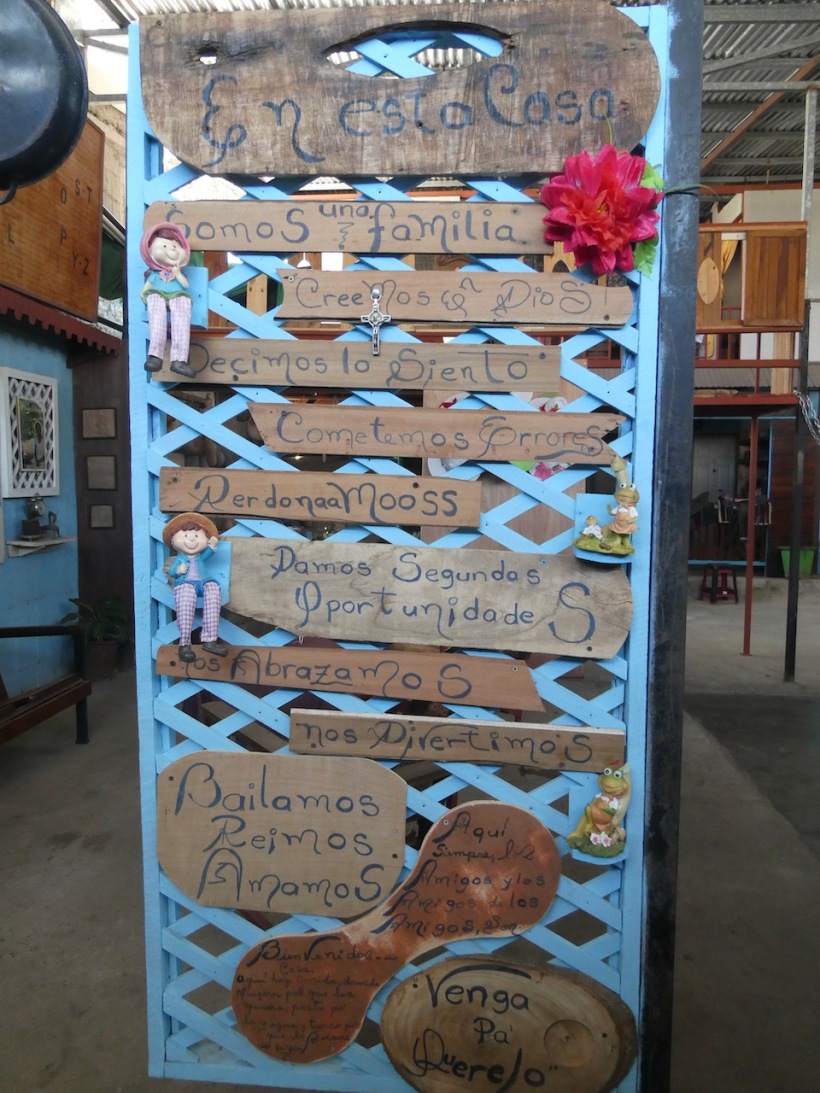 Barbara translated most of the words for me.
In this house

What wonderful statements about how to live together.

The home is filled with authentic replicas of the past and posters that honor the people of Bagaces.  There are pre-Columbian figures unearthed from the ground, recipes on pieces of wood here and there. I only took a couple of photos.

What a great coffee dripper and cup holder.

We took a group photo.

María recited one of her poems for us.  Even though I could not understand the words, I could feel the energy in her poem.

Duñia wanted to take a photo of Barbara and I in the kitchen. 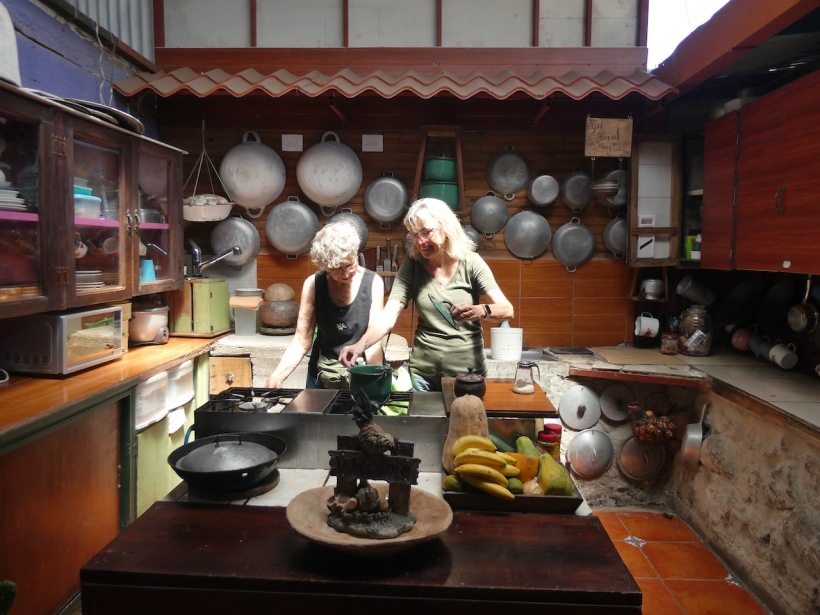 It was obvious that Maria had actually been cooking in the kitchen.

We had a buffet lunch in q local restaurant.  I am definitely eating way too much food.

We rode in the mini-bus to Llanos de Cortés Waterfall.  We walked down the stone staircase and I discovered that I could find my camera.  I couldn’t imagine that I had left it in the restaurant but Lee, the bus driver, and I were going to drive back there.  I wet my long sleeved shirt in the pond to keep cool and trudged back up the staircase.  Whew – It was in the mini-bus on the back seat where I had been sitting.  What a relief.  As soon as I found it, I remembered taking it off my arm to put on some sunblock.

Barbara had seen white monkeys when I was gone.  Sorry I missed that.  I did see an Iguana where we were sitting.

The water level is low this time of the year.  We went wadding (Barbara went swimming) in the  gentle pond and I took a few photos. 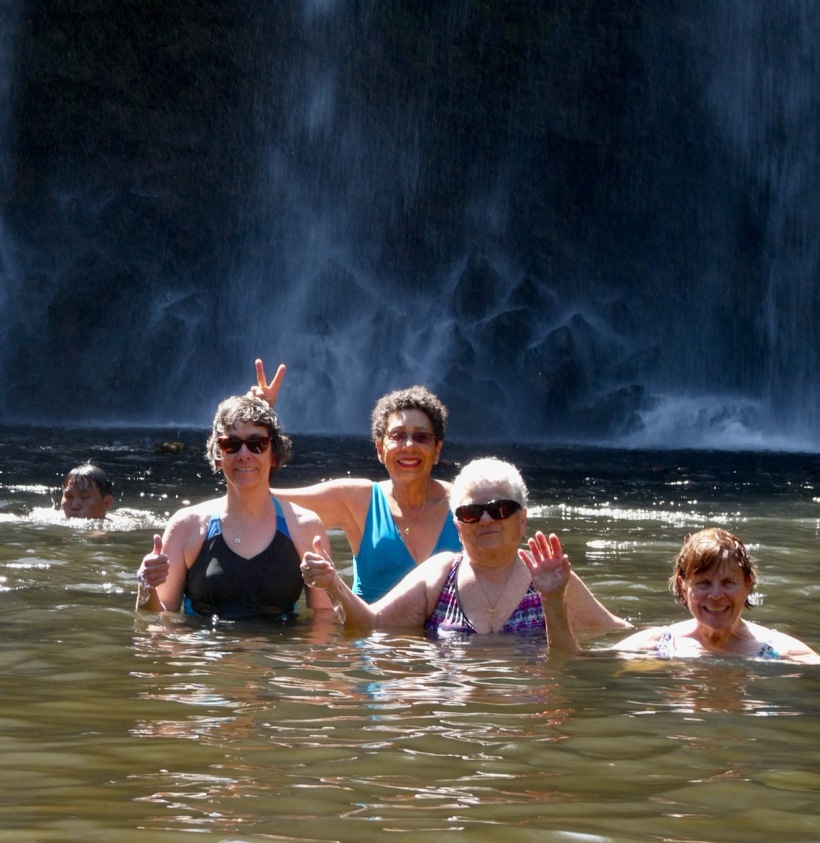 It was wonderful to get cool in the water.

The Tico women rested under the tree. 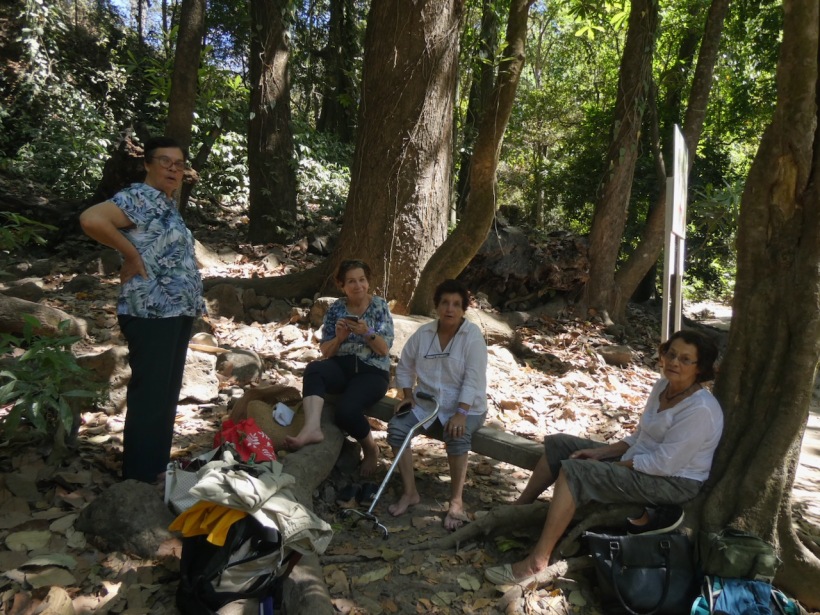 I realized that Duñia had not come down with us.  The leg she had in a brace from her hurting it in Mexico when she was visiting her daughter would not allow her to walk down the stone staircase to the water.  I felt badly for her because it must have been very, very hot waiting for us for so long.

We left the waterfall area and went home.  It was very nice to get back to Duñia’s home early.  Barbara and I relaxed on the back outdoor area. It was a treat to see birds in the yard and we both attempted to photograph them. The first two photos are  are of small birds called that were  in a tree that was a not very close to us.  There were many of the flitting through the trees. 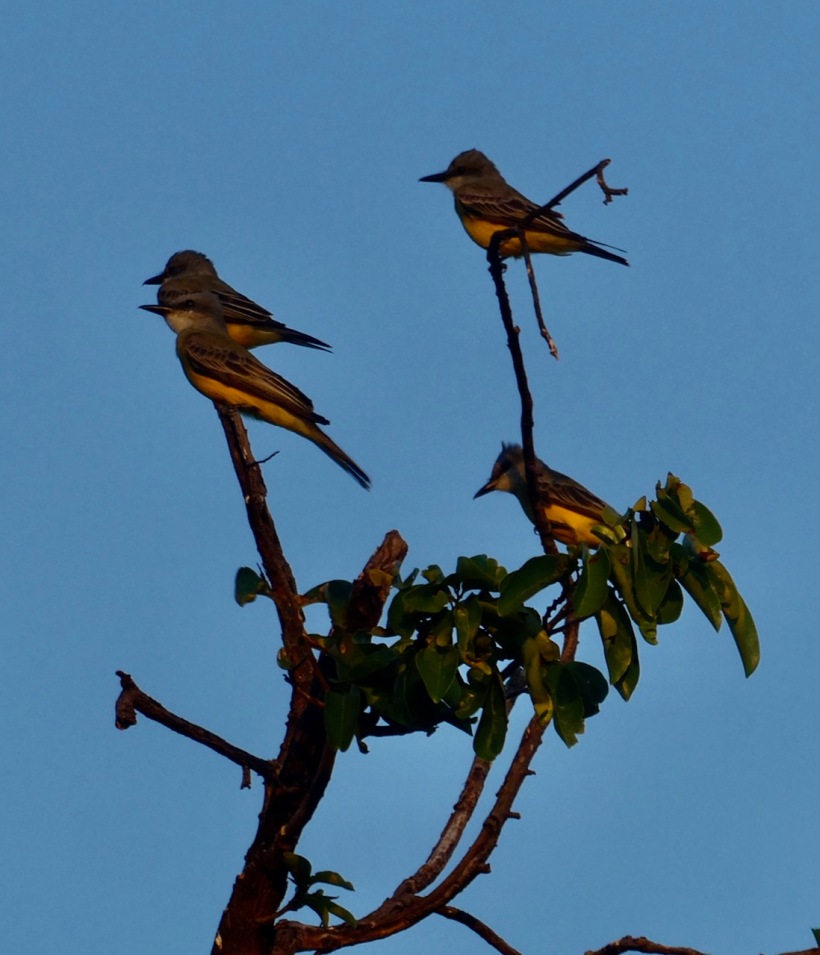 This bird was larger and came much closer to us.

Duñia made a delicious dinner of cannelloni the wonderful pico de gallo (tomato, onion, cilantro, lemon and salt) salad .  With the help of Barbara’s interpreting, we had very a interesting conversation with Dunia and Ruben about Costa Rica.  We learned a lot.