We actually slept in a bit today because last night Dunia told us that we would eat breakfast at 9:00, brush our teeth, and meet people at 11:00.  On my way outside to the courtyard, I saw Dunia doing the wash.

I went out to the garden with Barbara.  I noticed that unlike apples, the mangos hang down from a long stem.  I thought that was interesting.

We had cheese empanadas and fruit for breakfast. 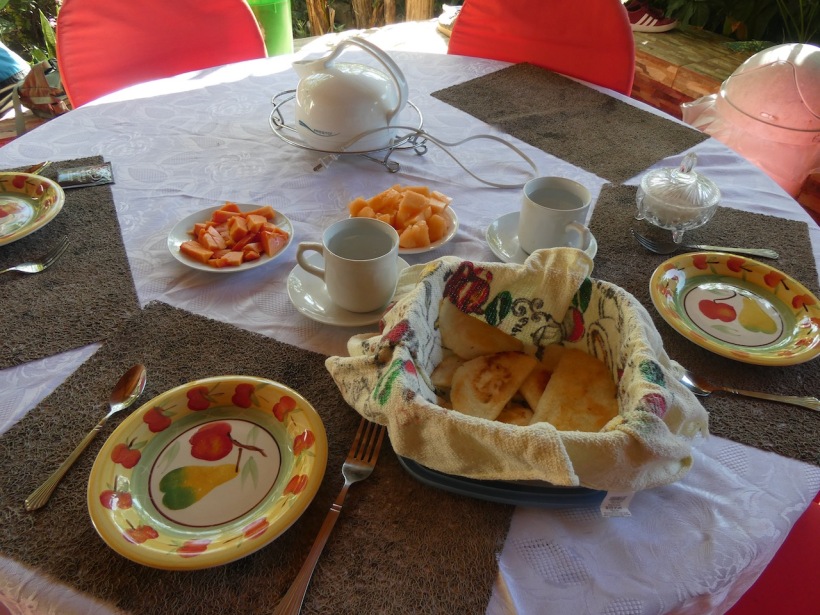 Barbara helped me ask Dunia why there were pop cans hanging in the garden. 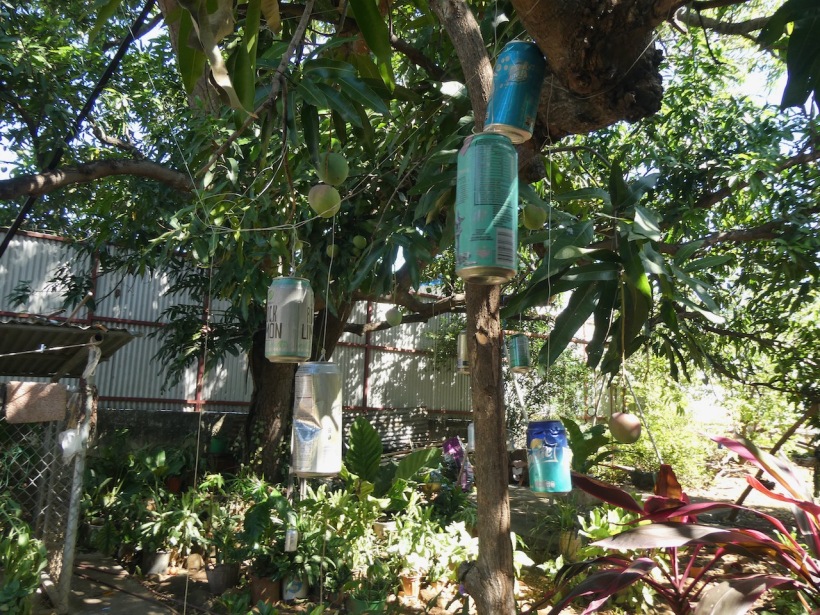 She said that they put honey on top of the cans to attract pollinators like bees.  With Barbara’s help translating we had very interesting conversations with Dunia over breakfast.  Barbara is very fluent and a wonderful interpreter.

Dunia’s son, Ruben, drove us to Tilarán.  We stopped at the grocery story to “Top Off” my sim card because I couldn’t figure out hot to access the hot spot on my iPad.  It was not possible because the system was down.

Ruben dropped us off at Naibe’s house where Lee and Susan are staying.  Naibe showed us her arts and crafts work.  Aside from the needle point and paintings made from wool, she uses plastic bags to make flowers and other items and even uses  old newspapers to weave items. 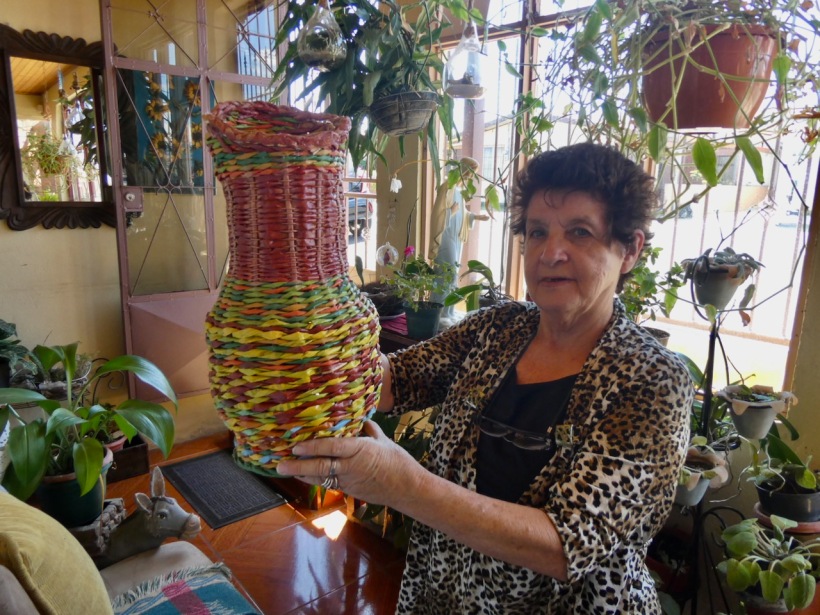 The mini bus picked us all up and off we went.  We passed a cemetery on the way which the Ticos call the “Last Walk.” 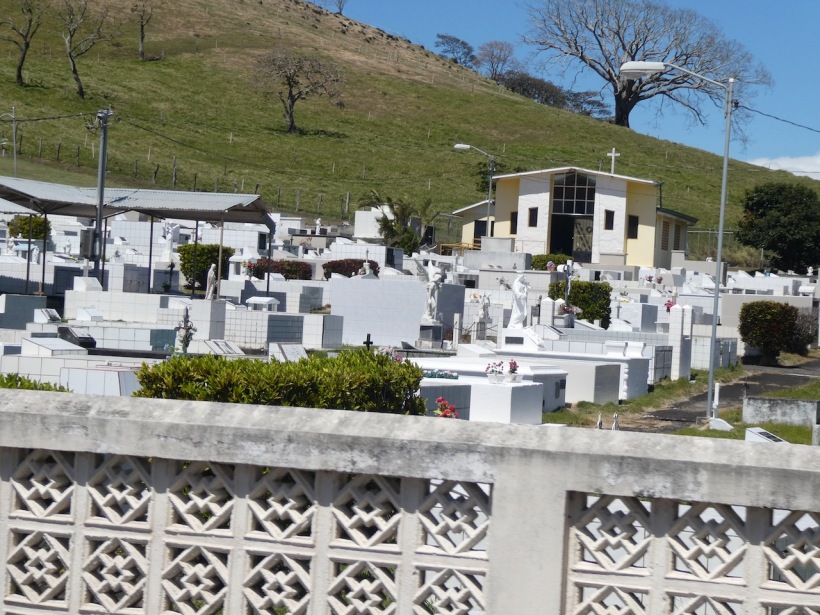 Something I forgot to mention before is that before we start on our way in the mini-busses or vans, somebody usually says a prayer.  In Liberia it was Rigo.  This morning it was Dunia.

I received a Whatsapp message from Vilma this morning asking me to send a photo to her.  How sweet.

The destination today was Mirador Solania.  I could not find any information about this place. It is up on a hill with views of the valleys around. The first thing I did was to take a panorama.

Then I asked Barbara to take a photo of me to send to Vilma.

We sat underneath a covered area.  Lee introduced each of the members of our Portland group and then each of the Ticos introduced them selves.  Both Lee and Barbara translated.  I took photos of each person.  I realized that it would make it much easier for me to learn names in Tilarán than it was in Liberia.

In this first collage from  left to right from top to bottom their names are: Naibe, Elsie, Joaquin, Judith, Maria and Isabel.

And these are: Carmen, Omar, Antonia, Estaban, and Dunia.

I am so impressed by these people. Each of these people told us something about themselves. In addition to the the work they do for Partners of the Americas,  they are involved in so many social services – forming an organization for migrant children; forming a national organization which assists elders who have been abandoned by their families, volunteering in schools, etc.

They served beef and vegetable soup with rice for lunch.  The watermelon drink was very refreshing.  After lunch we realized that we were staying up there until sunset.  The played music and some of us danced. 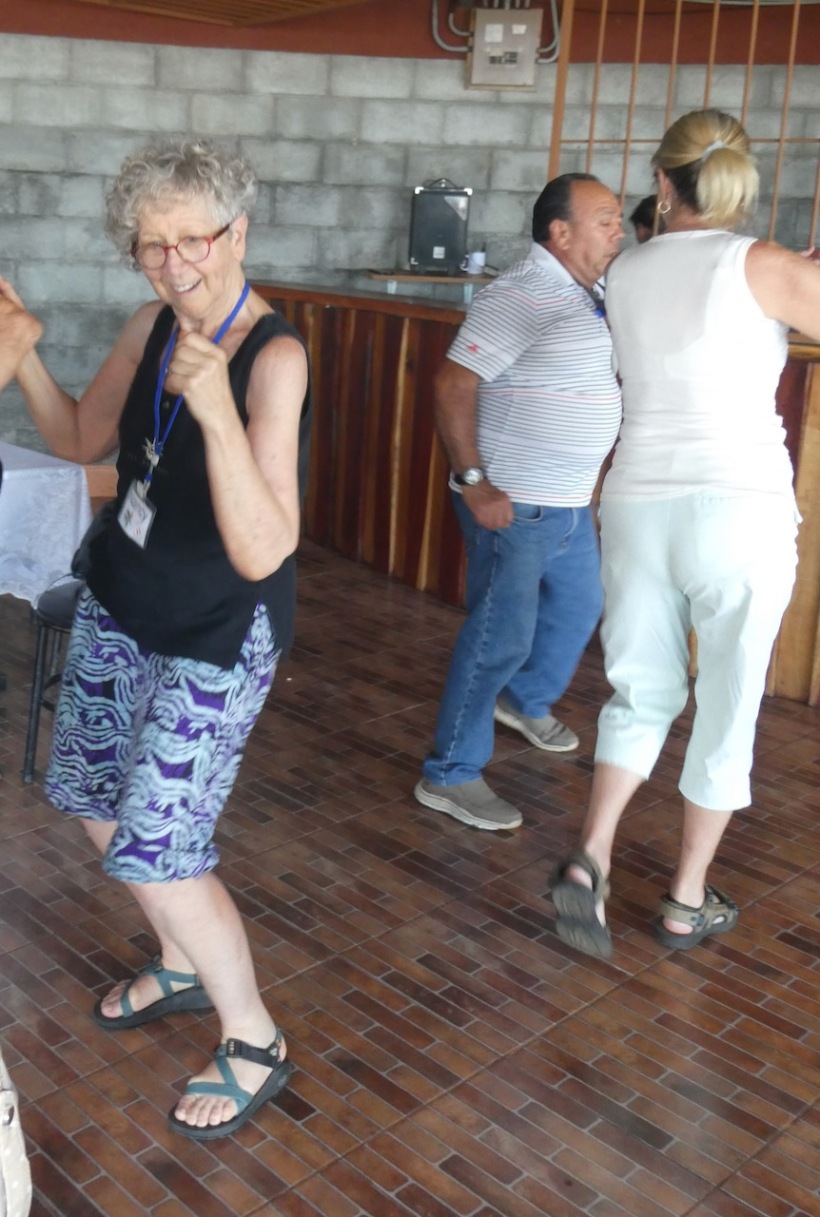 Then we sat and talked with each other.  Dunia, Barbara, and Anne found a comfortable place to rest.

At one point, Lee had a great idea for us to take a walk along the road. Although it was very sunny, the wind kept us cool. We had less than one hour to walk because Joaquin said they would take us to a coffee farm in less than 30 minutes.  I took a couple of photos along our stroll.

Then most of us piled into the mini-bus.  The coffee plants were not in bloom at this time of the year.

I was telling Joaquin about visiting coffee plantations in Ethiopia and he told me the story of an Ethiopian man discovering coffee beans when his goats ate a plant.  I wanted to verify what he said so I looked it up on the web and found this Ethiopian Legend

There, legend says the  goat  herder Kaldi first discovered  the potential of these beloved beans. The story goes that that Kaldi discovered coffeeafter he noticed that after eating the berries from a certain tree, his goats became so energetic that they did not want to sleep at night.

When we got back to the shelter, they served dessert to us.  Barbara and I shared a plate of  the boiled bananas with cream.

We each only took one bite. This was not my favorite treat. I enjoyed another glass of the watermelon drink.

Joaquin sang for us and I took a video but it didn’t work.  Bummer.

It was Joaquin’s birthday so they also served cake to those who wanted it.

As we waited for the sunset (the reason we were stayed so long at this place) I took a few more photos.

I love the way this photo actually brings back the feeling of the wind blowing.

The views in the distance had an ethereal feeling. 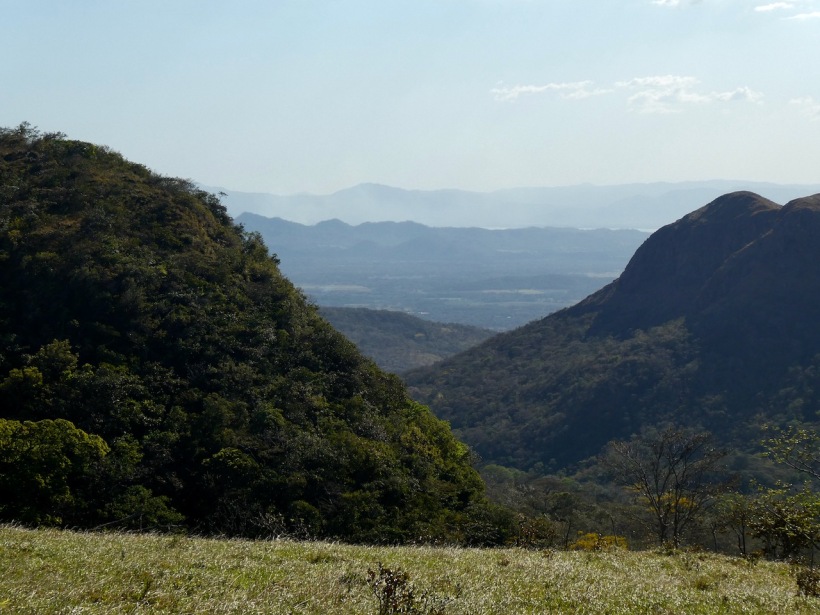 Joaquin took a photo of the whole group.  We had to take it several times because the lighting wasn’t good.

Finally it was sunset time.

Of course, the clouds are the one of the best parts of a sunset.

We were driven back to Tilarán and Dunia’s husband, Ruben, met the mini bus.  He took me back to the supermarket and Barbara lent me 1000 colones so I could add data to my phone.

We stopped at another grocer where Dunia purchased cebollina which is actually chives.  I had to photograph it because I could hardly believe the size of it.  So I laid it on the pan to show the size.

Dunia made a rice dish with chicken for dinner and we ate outside.  I love this place.

After dinner Barbara shared the video of her Mom’s memorial that she created.  It was a tribute to her Mom and brought tears to my eyes.

Well it is midnight and I ready for bed.