Sergia gave me another present this morning.  It is a water container made from jicaro from the calabash tree.  This is the tree we saw a couple of days ago and also what Sergio used to fashion the clay post he made with his student. 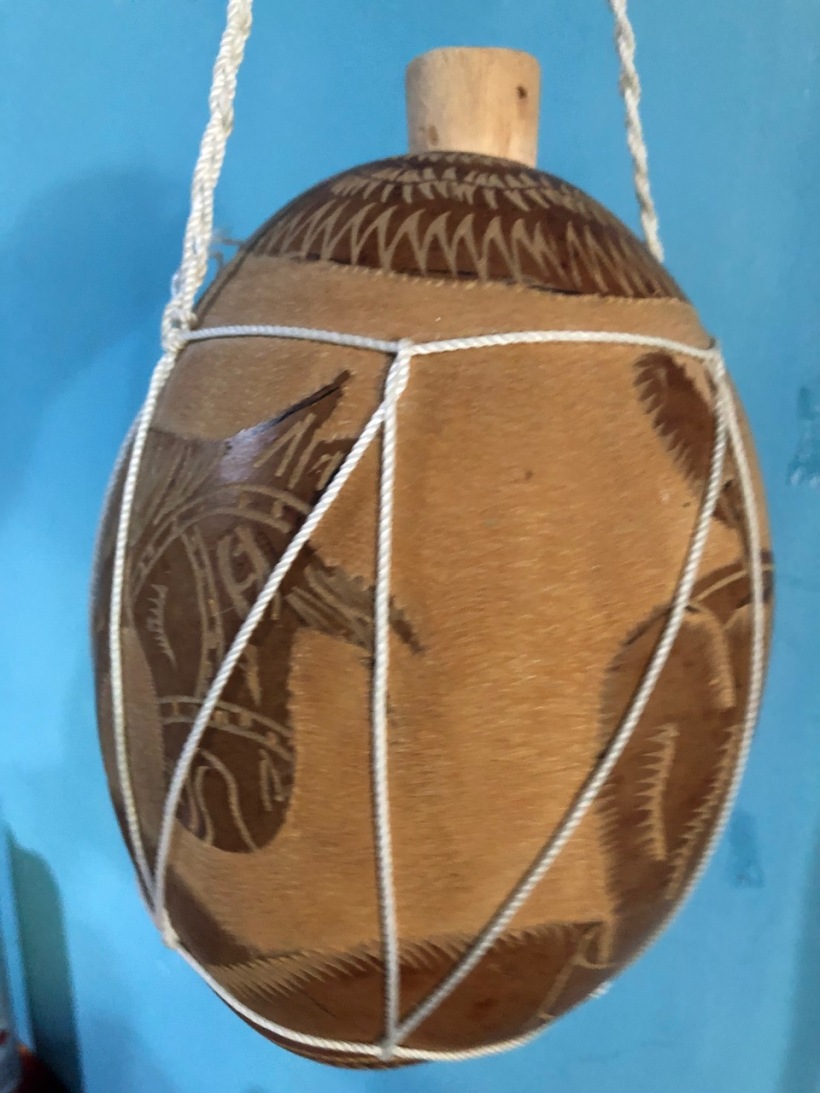 i started out with my 22 inch suitcase and my backpack.  With all of the gifts I have received, I am now also using my duffel bag to transport my belongings.

While we were eating breakfast, we heard a loud speaker from outside.  Sergio pressed a button to open the garage door and said, “huevos,” and called me to come outside.  There was a man in a truck selling eggs. 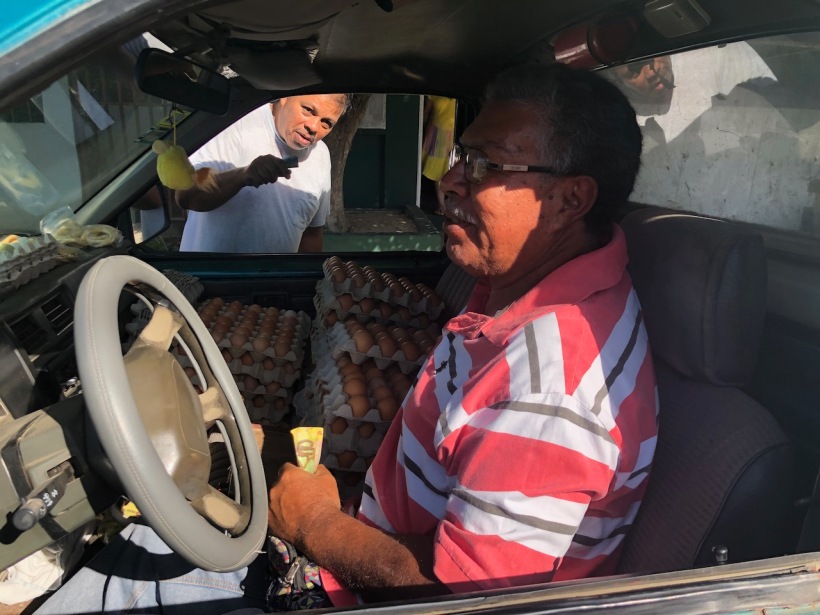 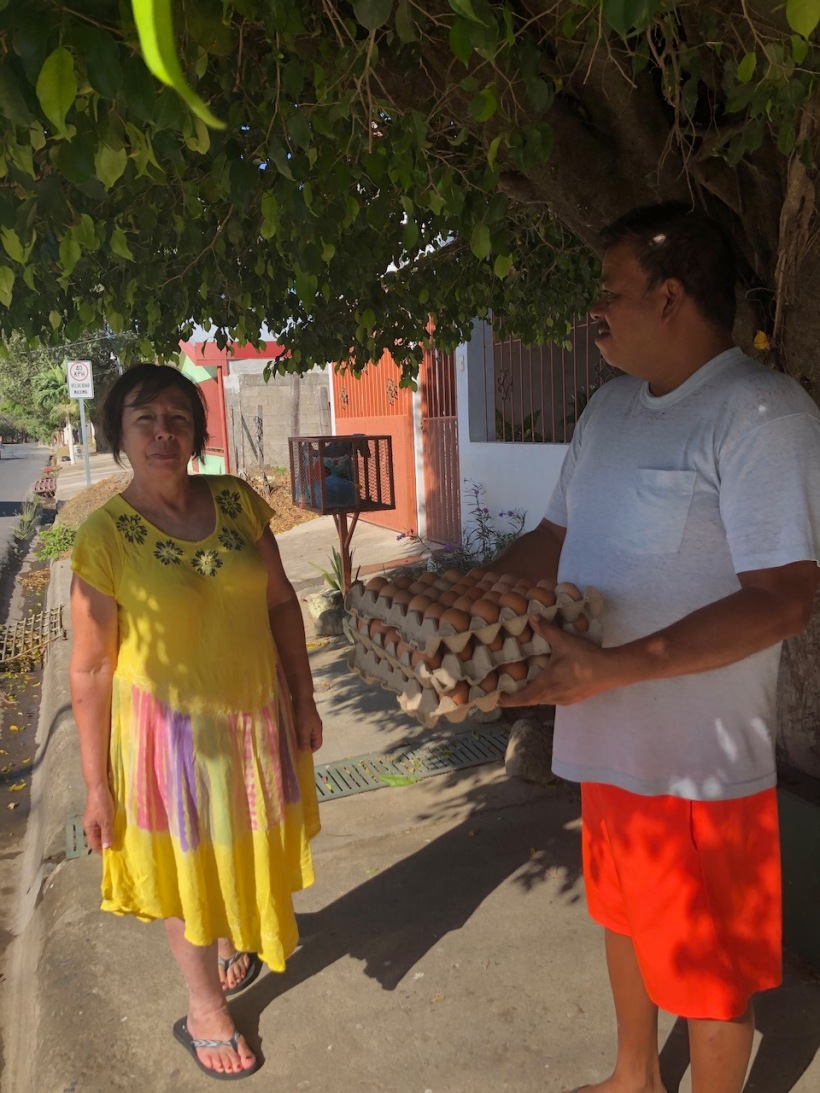 Sergio cut up honeydew melon for me to take on the bus and share with my friends.

Vilma and I had our last morning photo taken… 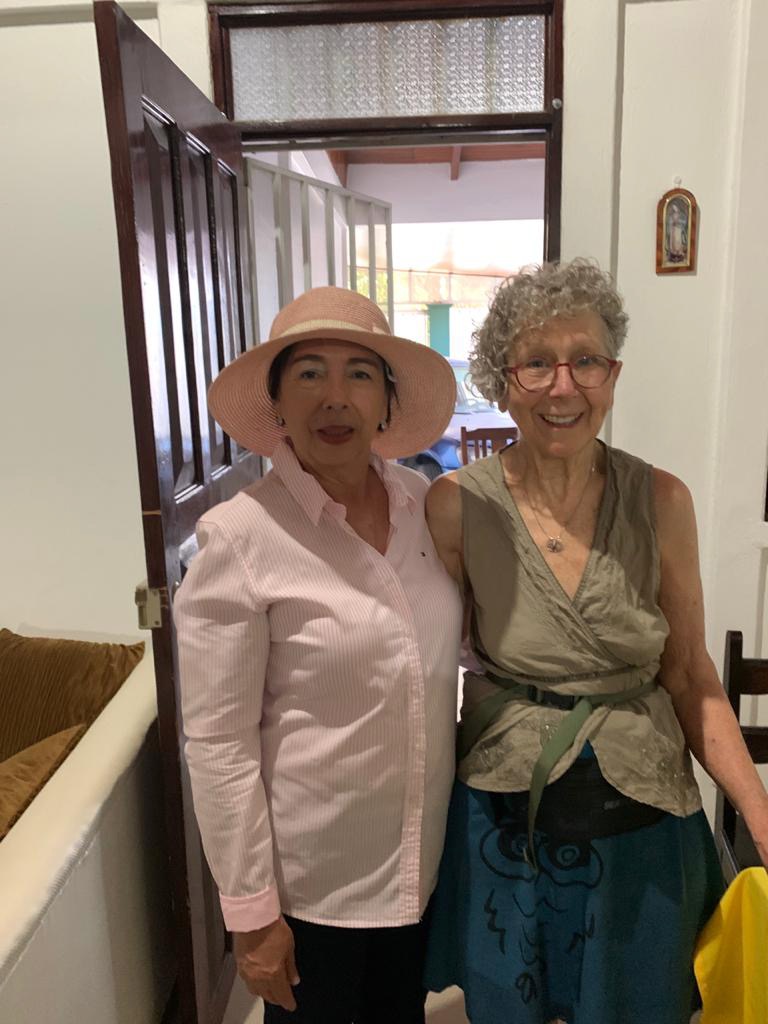 … and we were off to the bus.  I was so surprised when we arrived at the church to find that Vilma and several other women from Liberia were going to ride with us in the mini bus.  Others came to say goodbye.  It was pretty amazing to see them get all of the gear and our bodies into the mini-bus.

Barbara and I were dropped off in Cañas where our host, Dunia Garcia, lives.  She and her husband, Ruben, picked us up in town and drove us to their very lovely home.

This is my spacious bedroom with a window out to the garden. 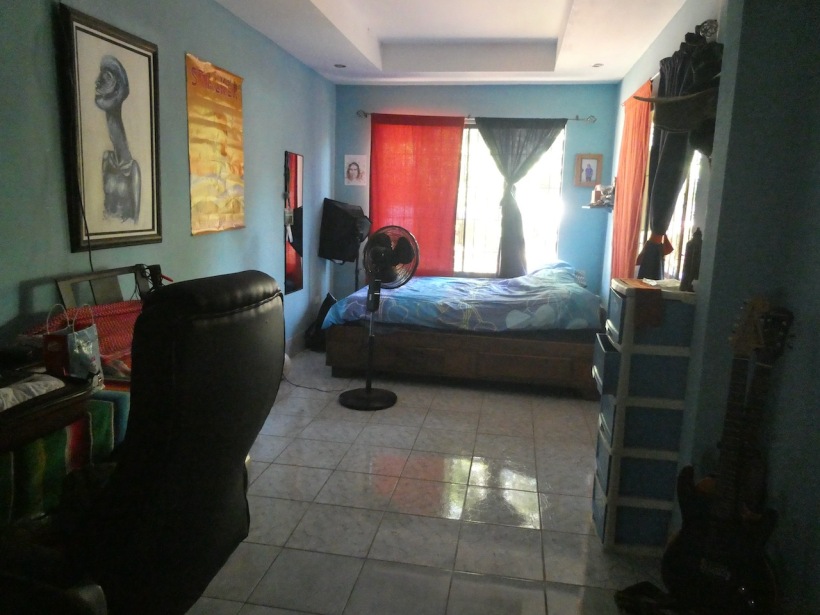 Ruben took us on a tour of Dunia’s garden… 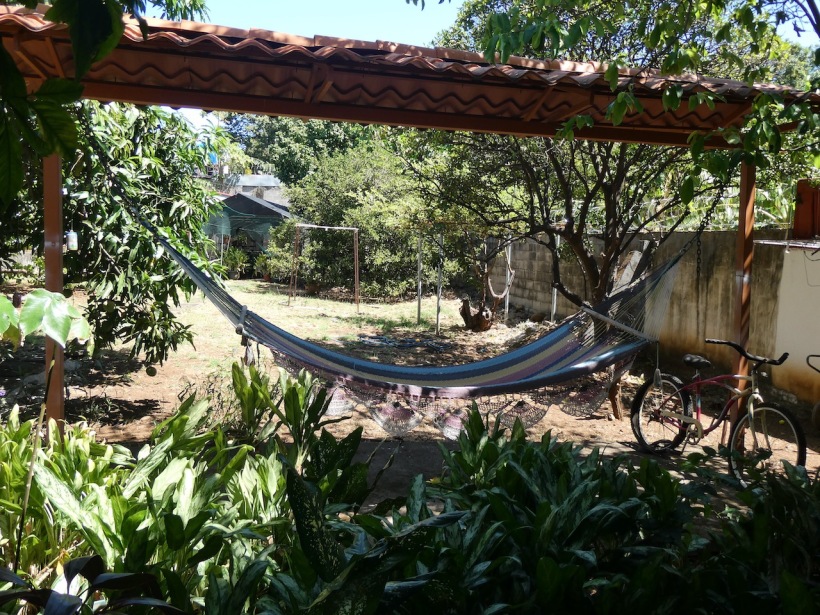 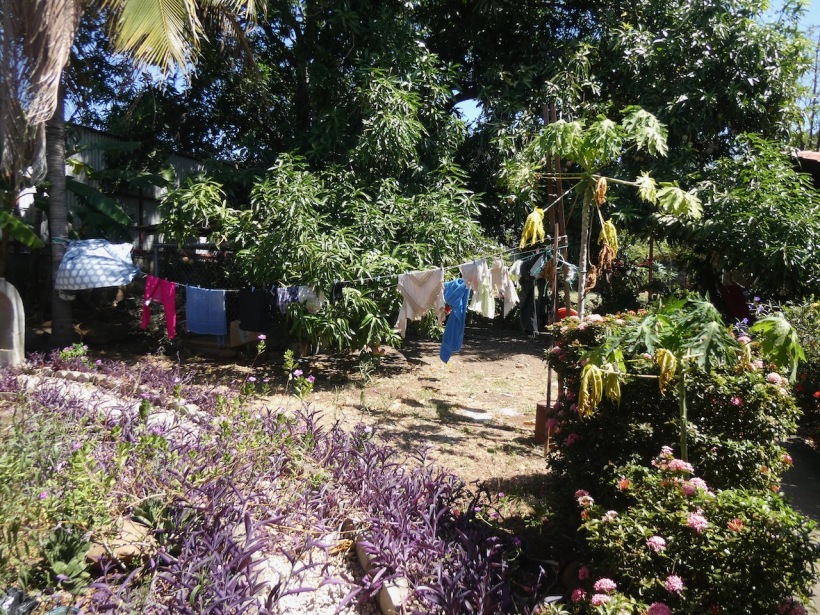 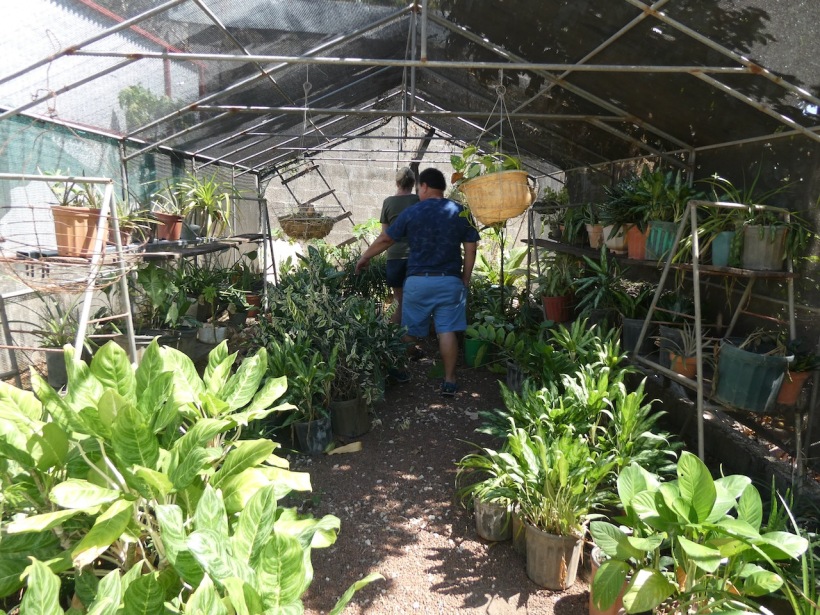 This is a papaya tree that is only 5 months old and will mature in 2 years. 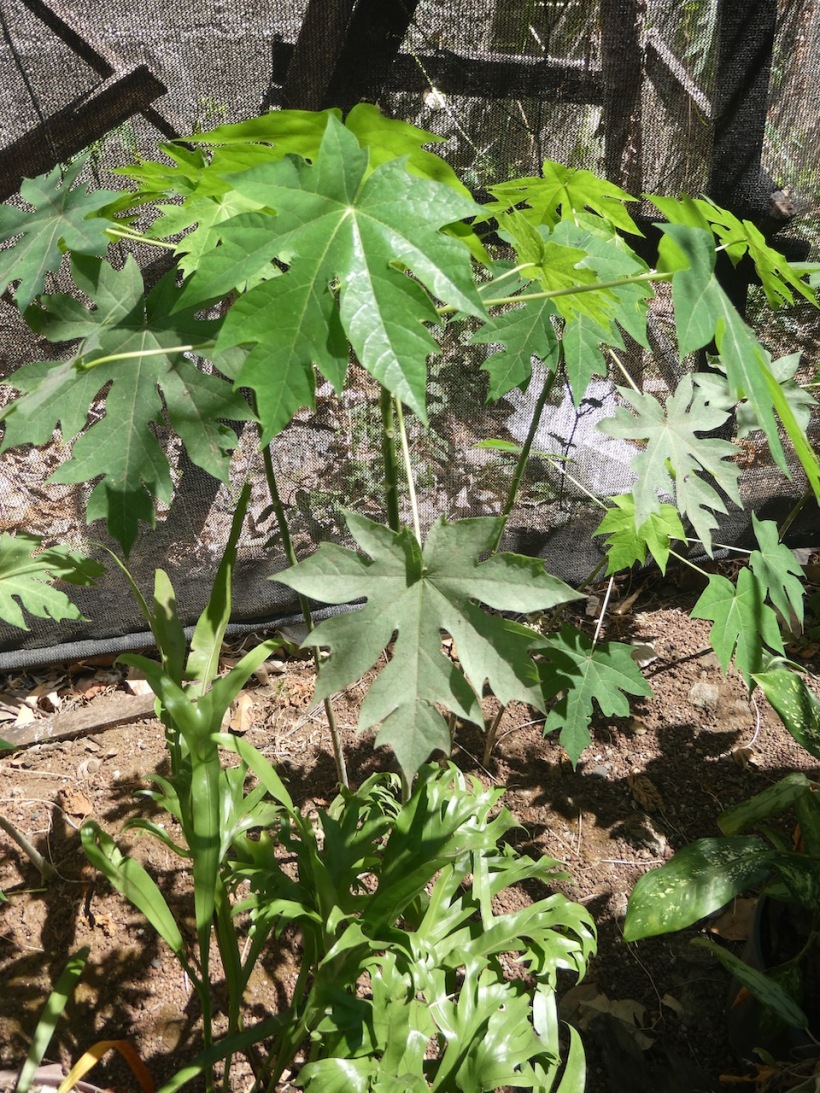 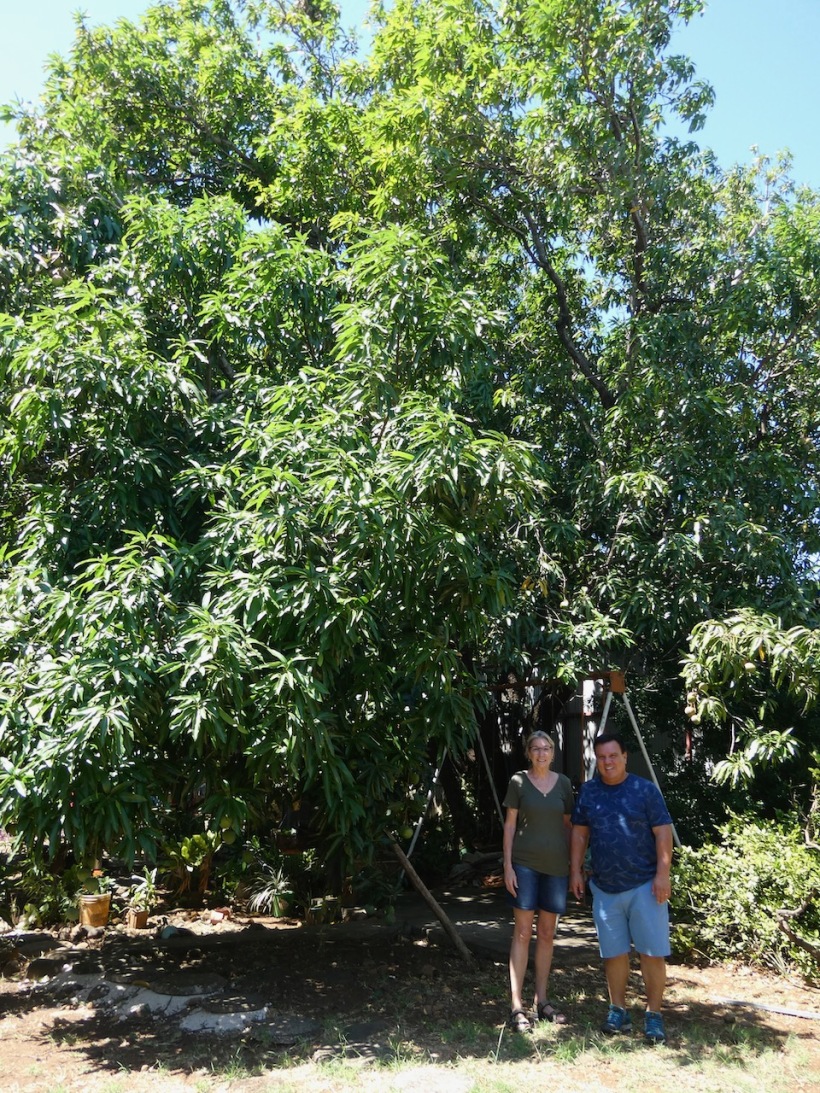 We sat and relaxed in the beautiful patio.  Even though the temperature in Cañas is just as hot as in Liberia, there is a constant breeze and we are very comfortable.

We were joined by their son, Ruben, and his girlfriend Marija.  They met when they were studying in high school in India.  Guri, Marija’s mom, and her husband, Gary also joined us.  It was such a wonderful place for us to sit and enjoy the lunch that was served. 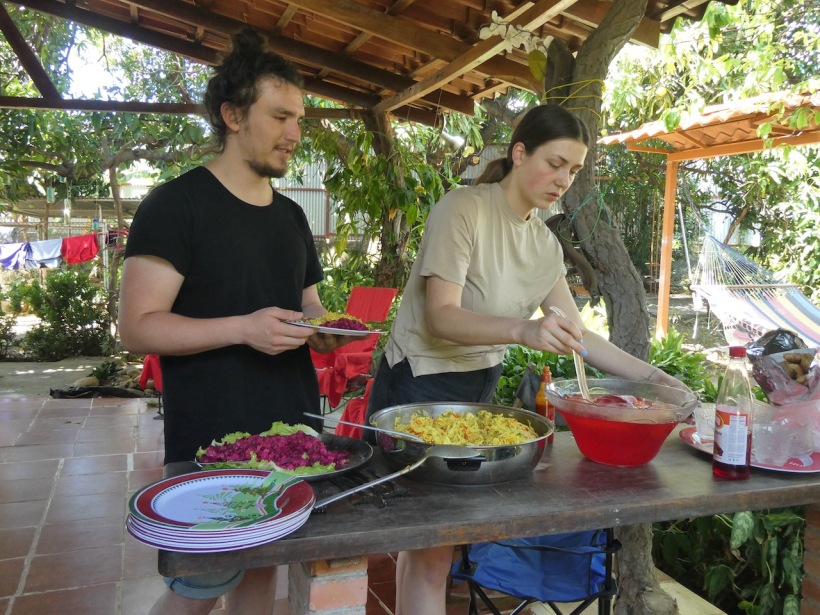 This early afternoon I had time to work on the posting before we leave to join the other 4 Oregonians and their hosts for our welcoming party in Tilarán.

We  didn’t have to be at dinner until 7:30 but we left at 4:30  because Dunia and Ruben wanted to take us to see views of Lake Arenal and Arenal Volcano. On the way we passed several wind farms.  They dot the landscape.  Although we have windmills in Oregon, we were so close to these.  Besides I always take photos when I travel. 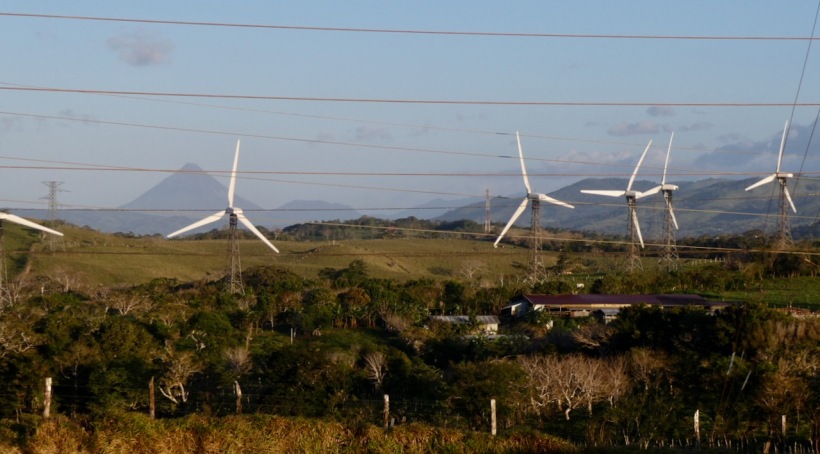 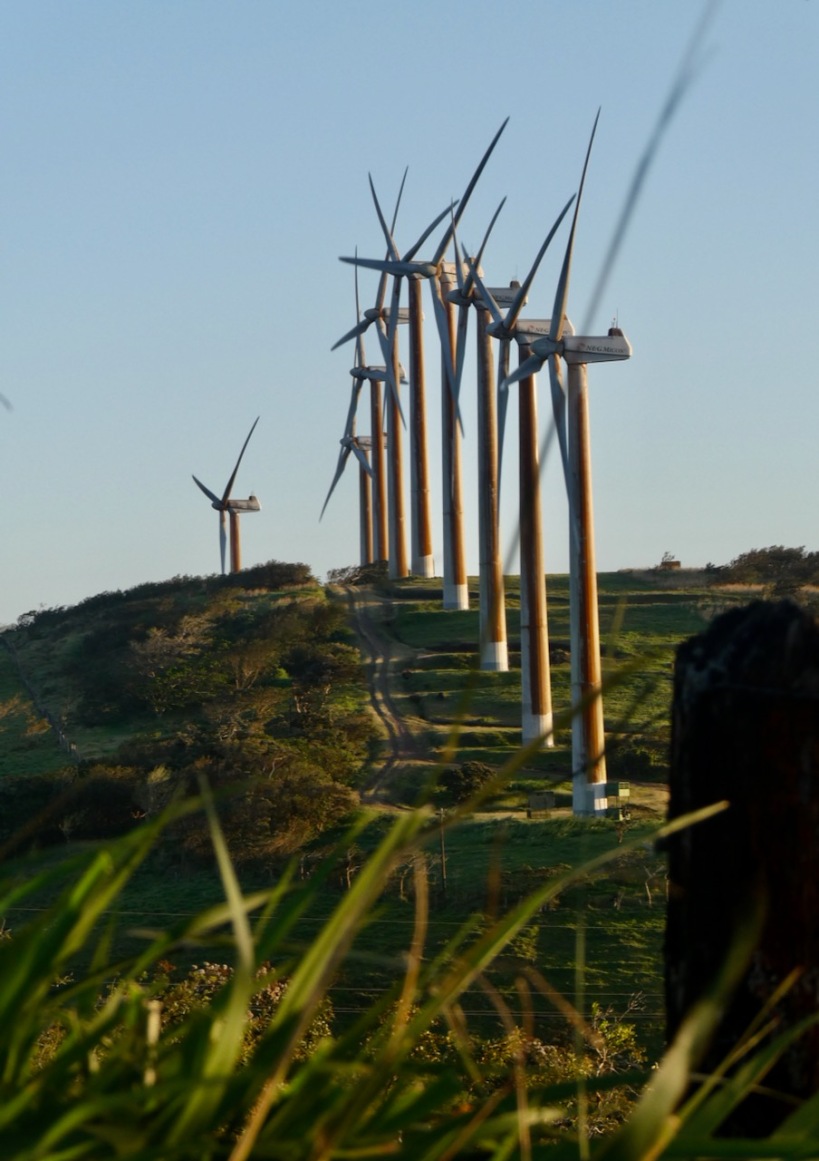 Before we left the house, Ruben had told us that it would be ‘Frio’ were we were going. Barbara looked up the temperature which said about 72 degrees Fahrenheit.  We didn’t think that was cold but the constant wind did feel cold in my sleeveless shirt.  I thought I had my long sleeved shirt in my backpack, but i had forgotten it.  Well I wasn’t going to freeze but I will make sure it is in my pack when we get home tonight.

We were lucky to have a view of Arenal volcano without clouds covering the peak. I think Barbara’s photo was better than mine.  She sent it to me to use. 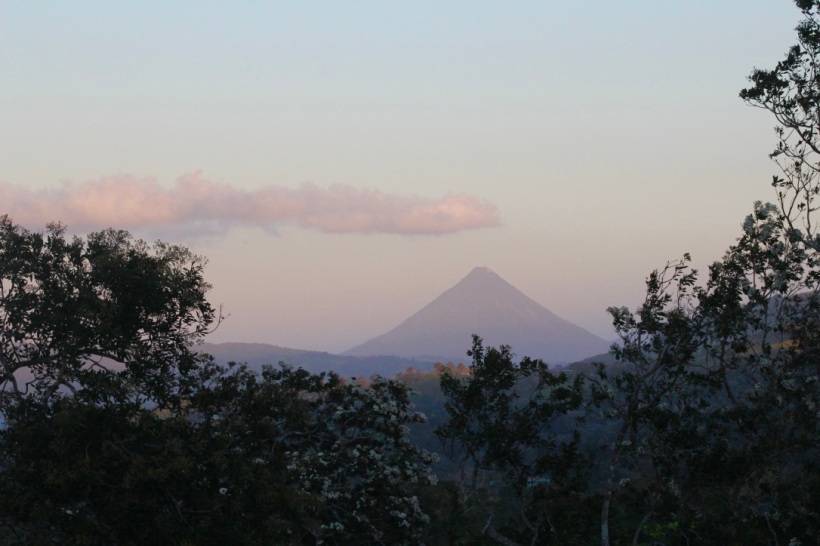 Arenal Volcano is an active andesitic stratovolcano in the province of Alajuela. The Arenal volcano measures at least 1,633 metres high. It is conically shaped with a crater 140 meters in diameter.

Just as we were taking our photographs, Dunia’s family parked their car near Ruben’s.  Of course we took a photograph of the whole family. 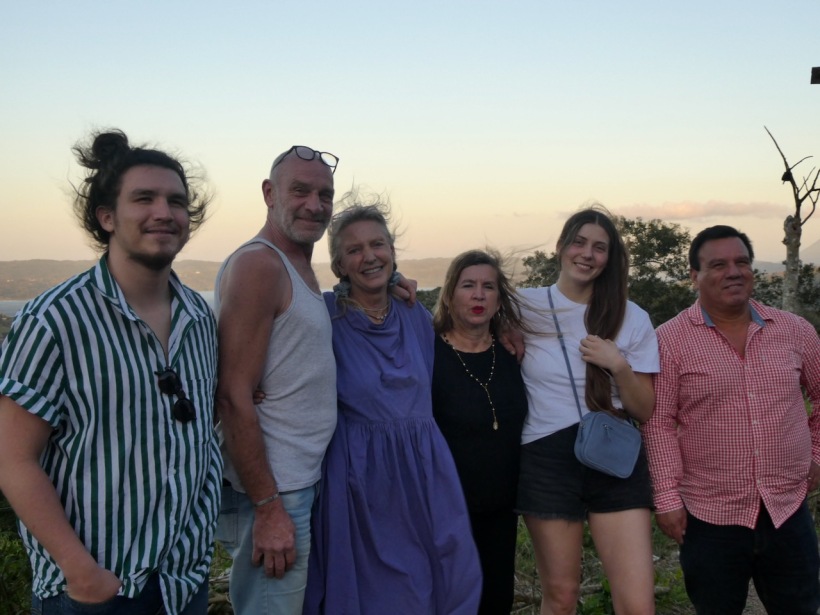 We still had time before dinner so Ruben offered to drive us around the lake. 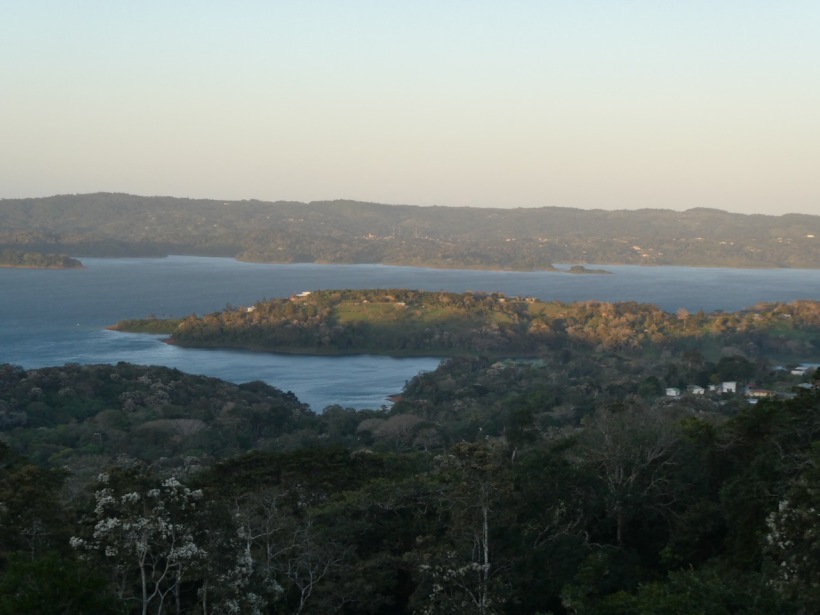 Lake Arenal is a lake which is situated in the northern highlands of Costa Rica. It is currently the largest lake in Costa Rica at 85-square-kilometers. Its depth varies between 30 and 60 meters seasonally. Lake Arenal was tripled in size with the construction of the Arenal dam 1979, which exists at the eastern end of the lake. This hydroelectric project is hugely important to Costa Rica, initially generating 70% of the country’s electricity, now closer to 17%, and was also a driving force behind Costa Rica’s green energy policy

The town of Arenal was relocated to higher ground when the lake was expanded in 1979.  The old towns of Arenal and Tronadora now lie abandoned at the bottom of the lake, with the new town of Arenal existing to the northeast on the lake.

We passed a horse grazing in the field above the lake. 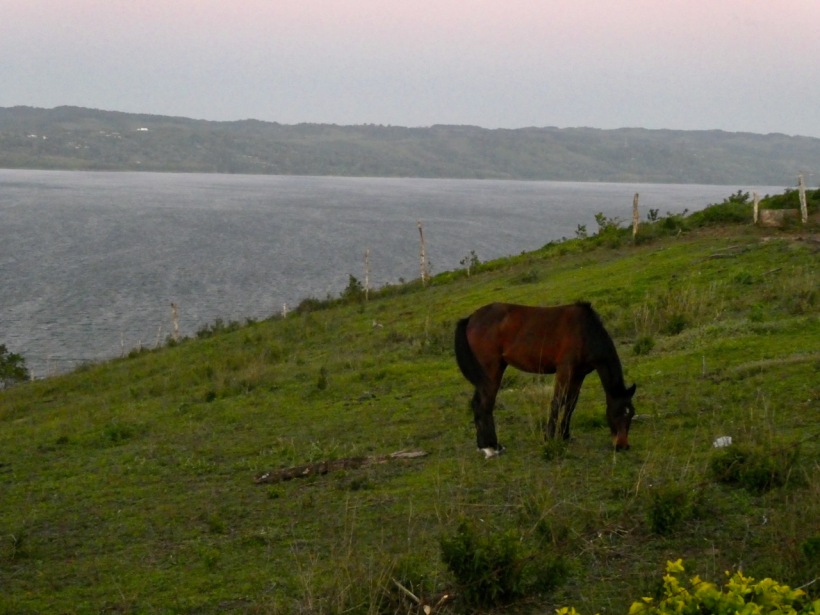 When we got back into the car, Barbara thought she might be missing her purse.  Neither of us could remember if she had taken it off of the table at Dunia’s home.  Dunia left a cell phone message for her son asking him to look for it. Barbara was actually pretty calm.

We went to the restaurant.  Ann and Joyce were already there with their host.  Ann lent me her cover-up because I was feeling chilled.  “Chilled!”  It actually felt better than the scorching heat in Liberia.

Many of the Ticos from Tilarán arrived.  The were all so friendly and warm.  The Chinese dinner was very good.  I took photos but I didn’t like the posed pictures.  I will try to get more candid photos this week and also learn their names.

I think we are going to have a great time here in Cañas and Tilarán.

One thought on “Last morning in Liberia; Off to Cañas and Tilarán”