My bed was very comfortable.  I just didn’t go to sleep early enough last night.  After my shower this morning, I took a photo af Vilma making breakfast for Sergio and me. 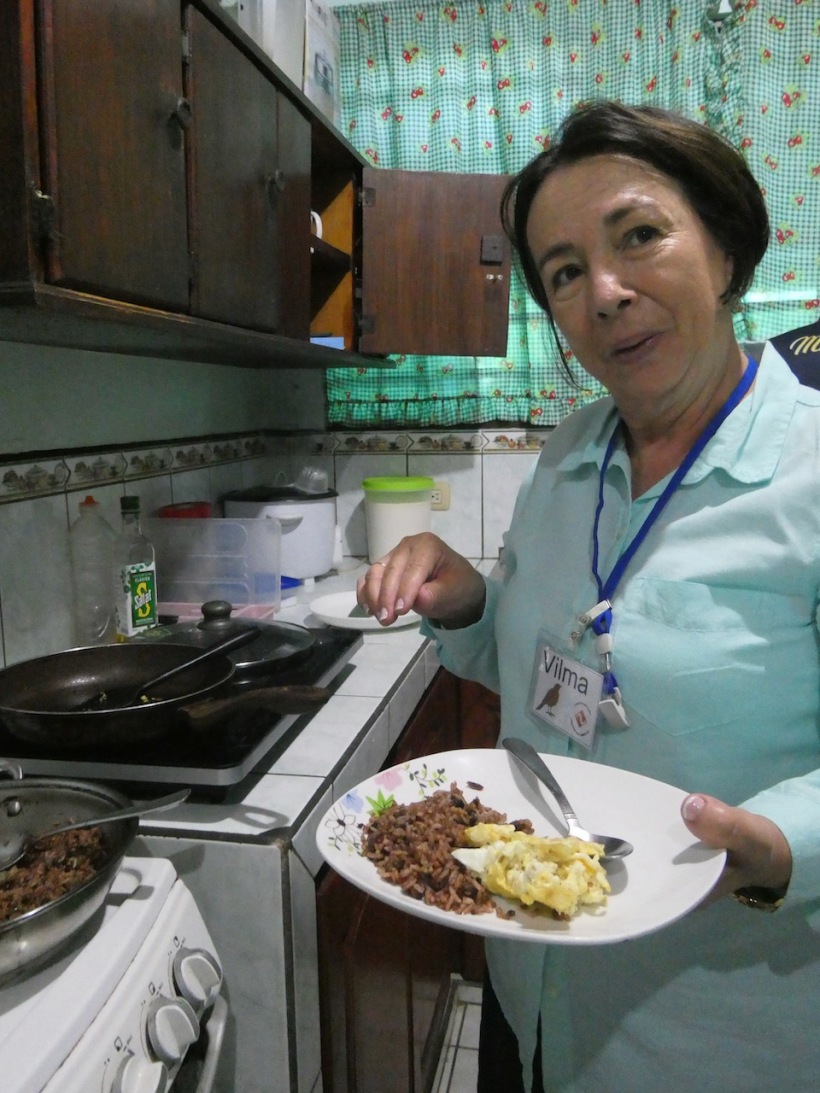 We had rice, beans, eggs, and fried bananas.  Sergio is a school teacher in an elementary school but the children in Costa Rica are on vacation today.  We finished breakfast and Vilma packed a bag with water and fruit for me.  I also filled my water bottles and off we went.  I took a photo of the garage door in the front of the casa as we drove off. 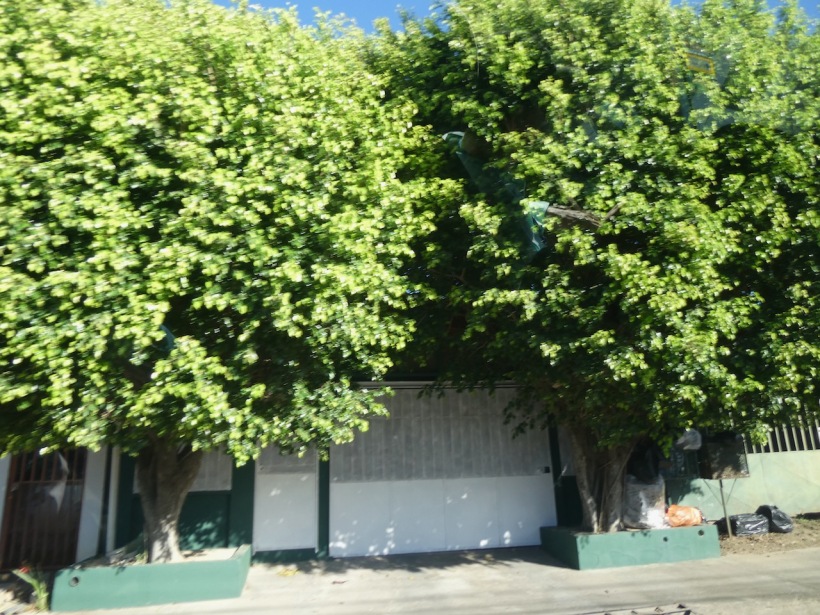 Sergio took Vilma and me to the Kolbi Internet place so I could by sim cards.  I knew that we were supposed to wait and go with Barbara (one of the woman on our trip) because she spoke Spanish.  But I could not explain that to Vilma because I didn’t know how to tell her in Spanish and she doesn’t speak any English.  We did get a person to help us that spoke English a bit and I purchased 2 sim cards – one for my phone and one for my iPad.  She put 1000 colones on each card.  It turns out that is only $1.77 each.   It was pretty confusing but I understood that I would have to top them off in a grocery store later.

When we arrived at the church, Barbara was waiting for me to buy our cards.  So the whole group had to wait for her to go get her sim card.  I learned that some of the Oregonian travelers do not have wifi at their host’s casa.  I am very lucky.

Today we drove to the Ponderosa Adventure Park.  The park is a private wildlife park of approximately 100 hectares, located in El Salto, south of the city of Liberia.  I read that all of the animals in the park have an African safari motif with enclosures for animals such as zebras, warthogs and giraffes all of which multiply in the safari.  It took some time for them to record each of our names and give each of us a bracelet showing that we paid.

Our hosts purchased bags of carrots for each of us to feed the animals.  Then we all boarded very long open sided vehicle with other passengers.  A man explained to us (all in Spanish) how to hold the carrots when we fed the animals. 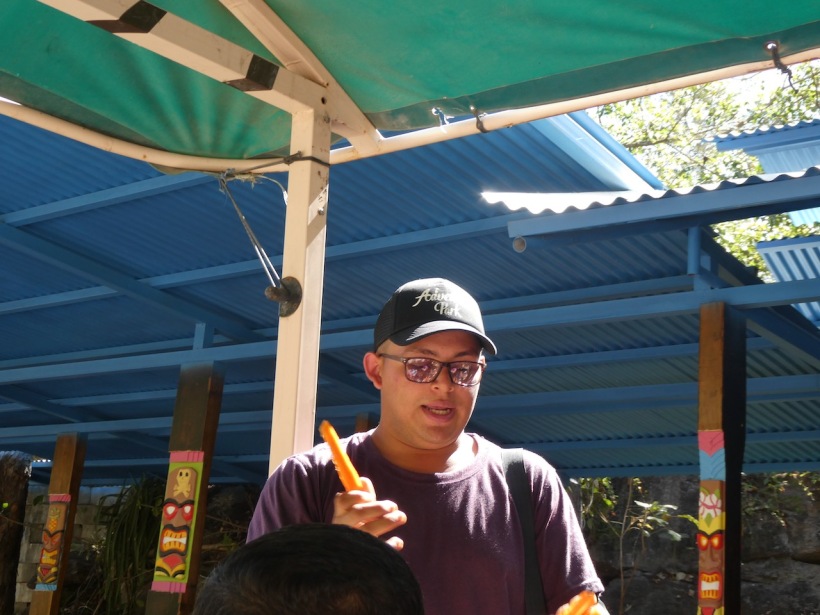 After I tried to feed my first ostrich and it grabbed my fingers, I realized that he wanted us to put the carrots on the side bar of the vehicle for the ostriches to grab.  Since I had already done a safari in Tanzania back in 1993, it seemed very strange to be driving around and feeding these animals.  Another man was driving around on a motorcycle opening gates for us and taking photos.  I never saw the photos he took.  I think he sold them to the other tourists.

i wasn’t in a great position to get photos, but here they are. 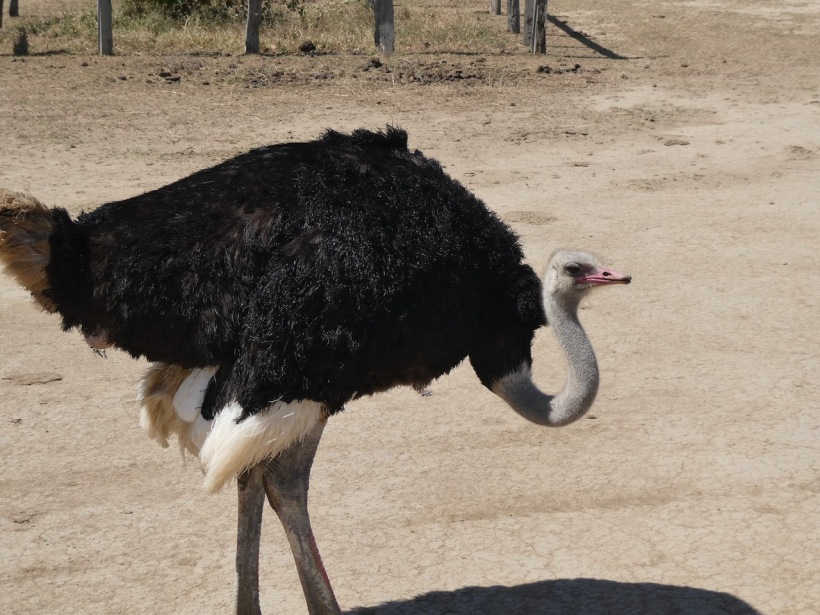 I liked this tree. 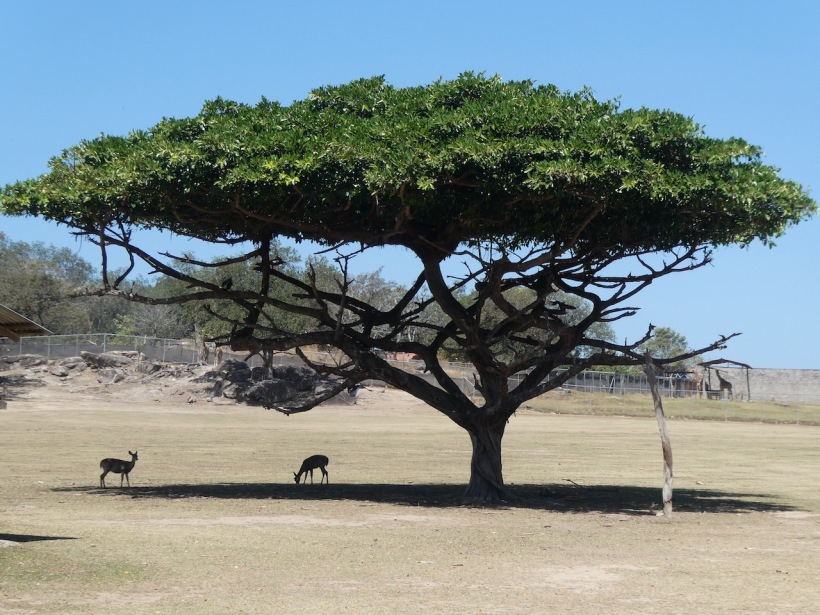 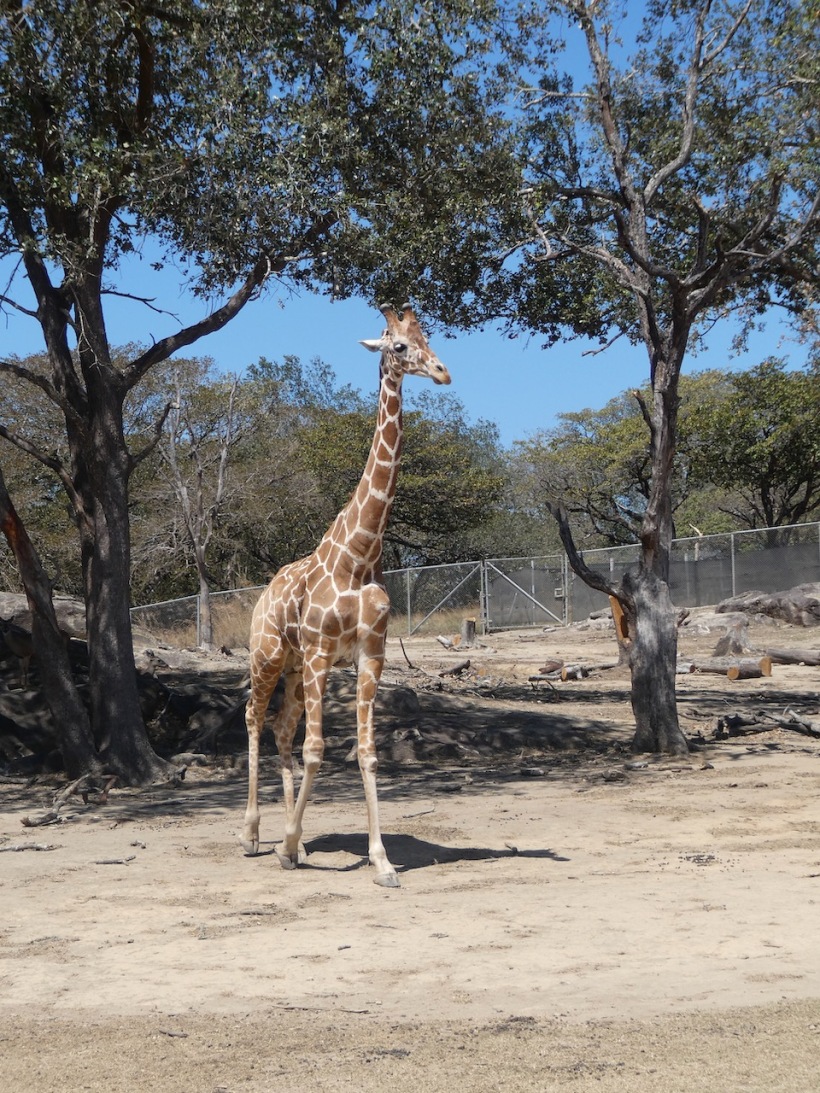 Some of the animas were much pushier than others so they were the ones who got the carrots. 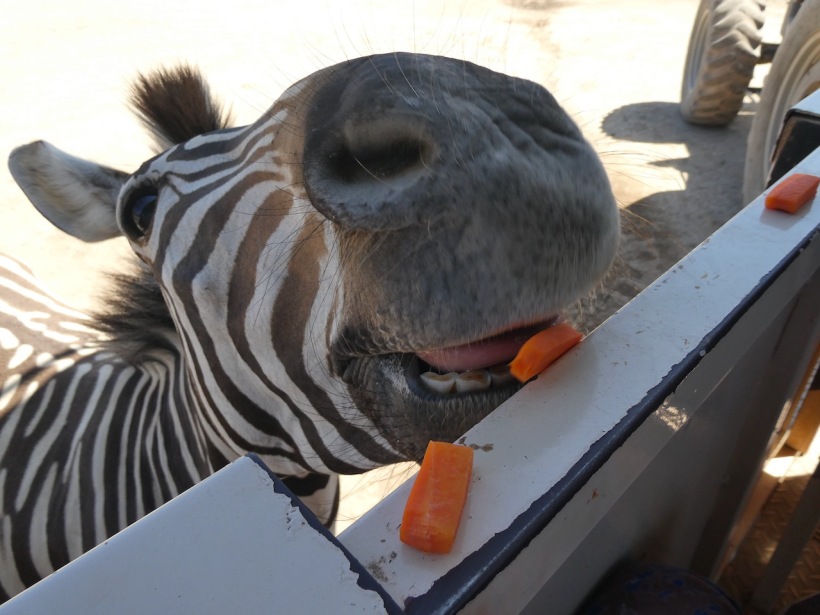 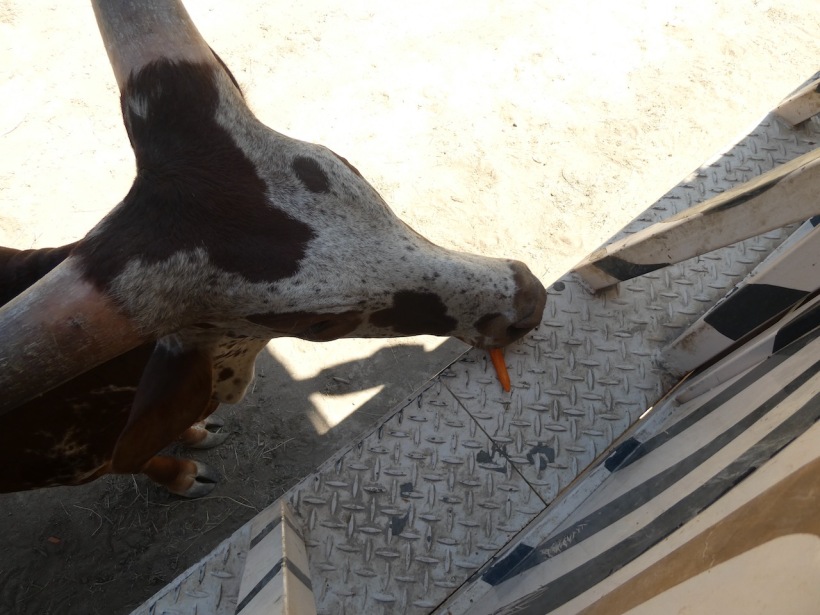 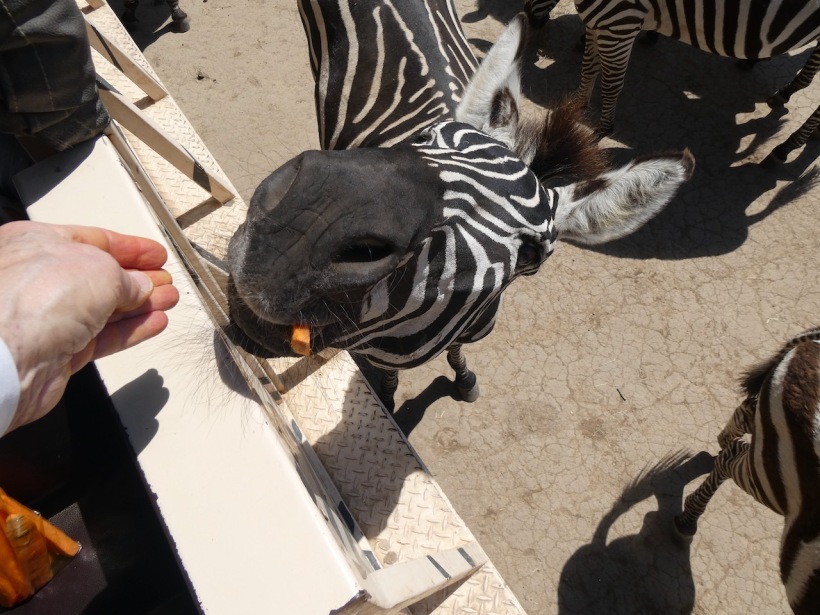 Here is Barbara feeding the giraffe. 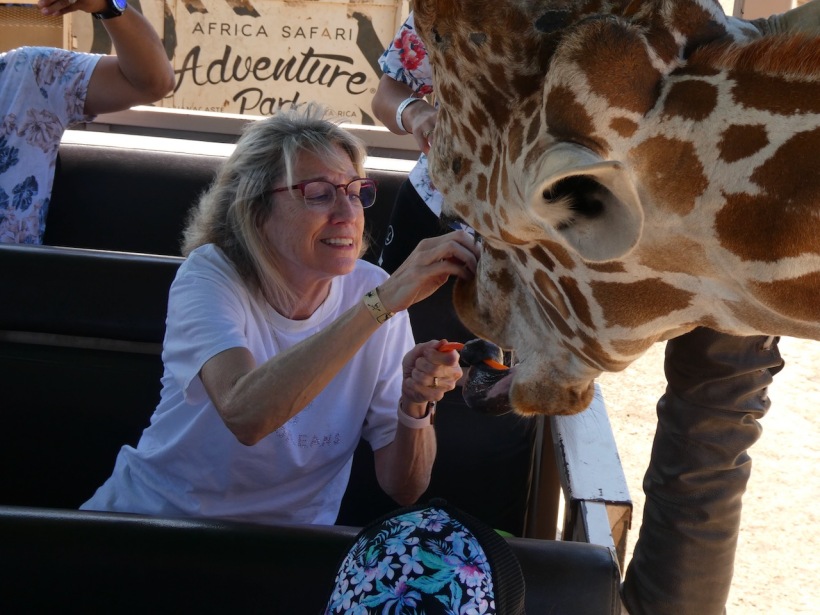 I don’t think I realized the length of a giraffe’s tongue. 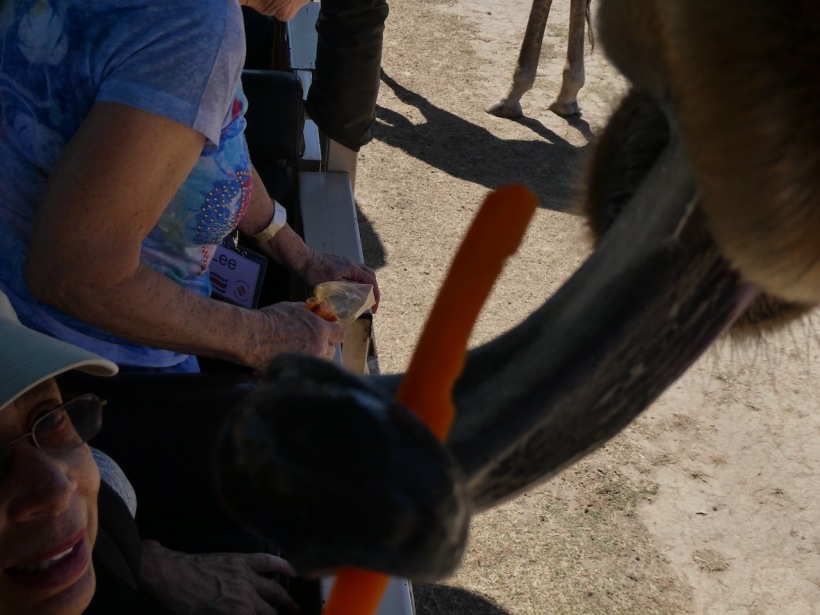 On the way back we saw an iguana type lizard. 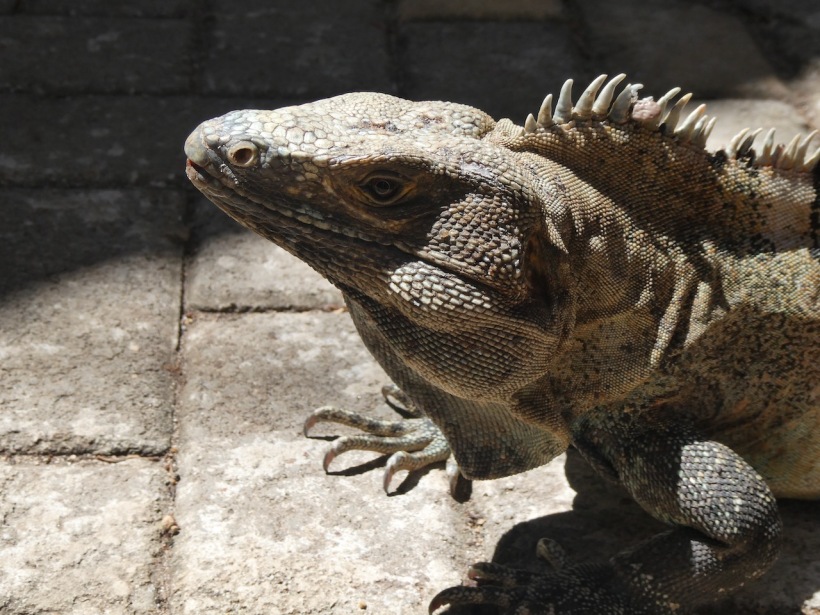 The park has an onsite waterfall and pond. There were rubber kayaks and even a zip line. 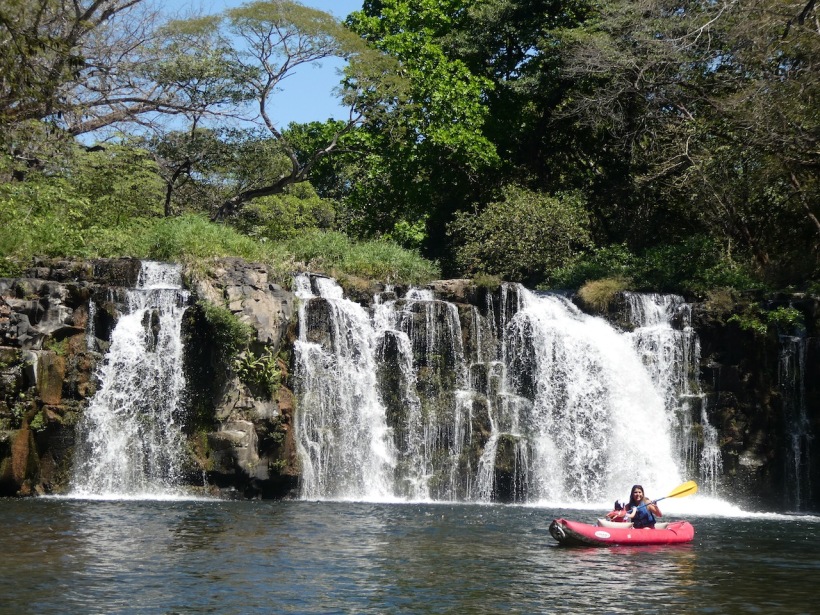 We were suppose to bring bathing suits today, but I didn’t get that message before we left the house this morning..   Those who had bathing suits were able to go deeper into the water.  I was only able to wade in up over my knees.  it was so warm out that I didn’t mind getting my pants wet. 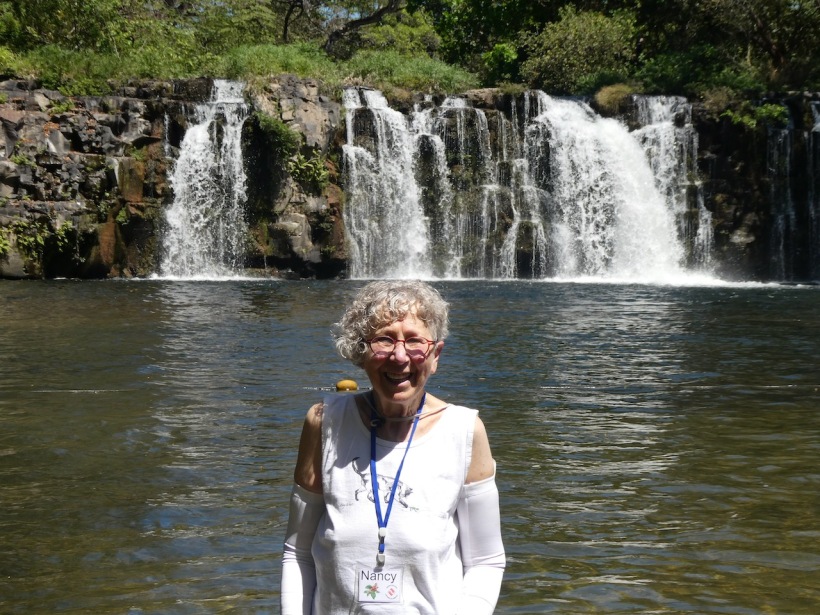 This is Ann who also lives in Portland. 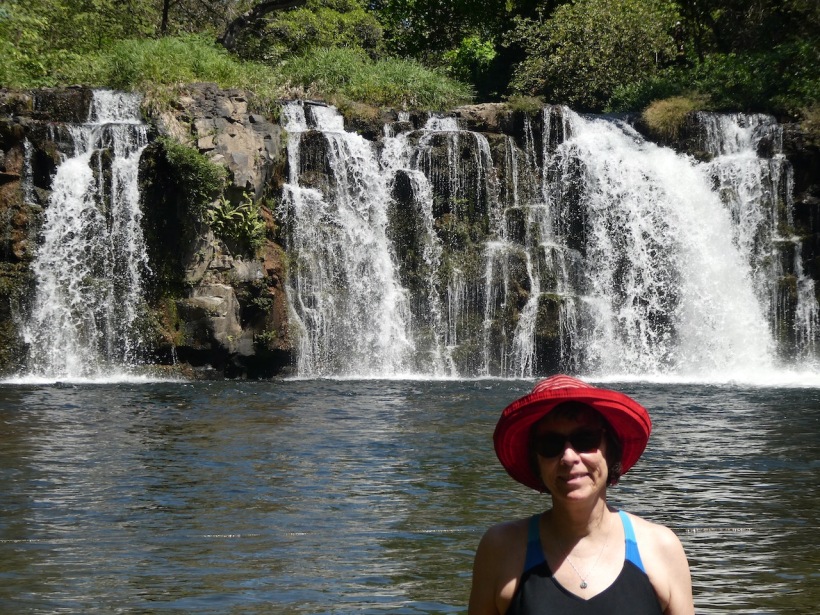 These women are the ones who were able to wade out much further.. 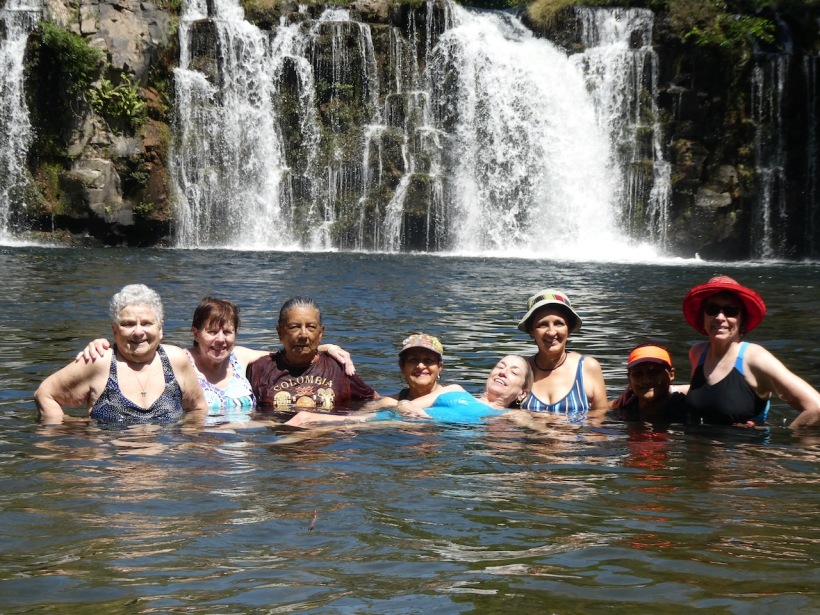 We hung out around the water for a pretty long time and then went back to the restaurant at the park.  I had delicious Tilapia with beans and rice,  I didn’t eat the beats,  Of our six travelers from Oregon, only Sue and I know almost no Spanish.  There is a lot of conversation around the table that we just don’t get.  Today Barbara and Lee translated for us as much as possible.

There was a long discussion (back and forth between Spanish and English) about the best way for me to put more data onto my sim cards,  Barbara had bought hers from a different company.  She had Movistar and I had Kölbi.  We finally determined that I would follow the instructions and go to the grocery store.

The walk back up the staircase after lunch seemed very long and hard.  I was pretty tired from not sleeping enough.

Sergio and Vilma took Sue and one of the hosts home and then we went to the grocery store.  They shopped for food.  Vilma told me the name of most of the  items in Spanish 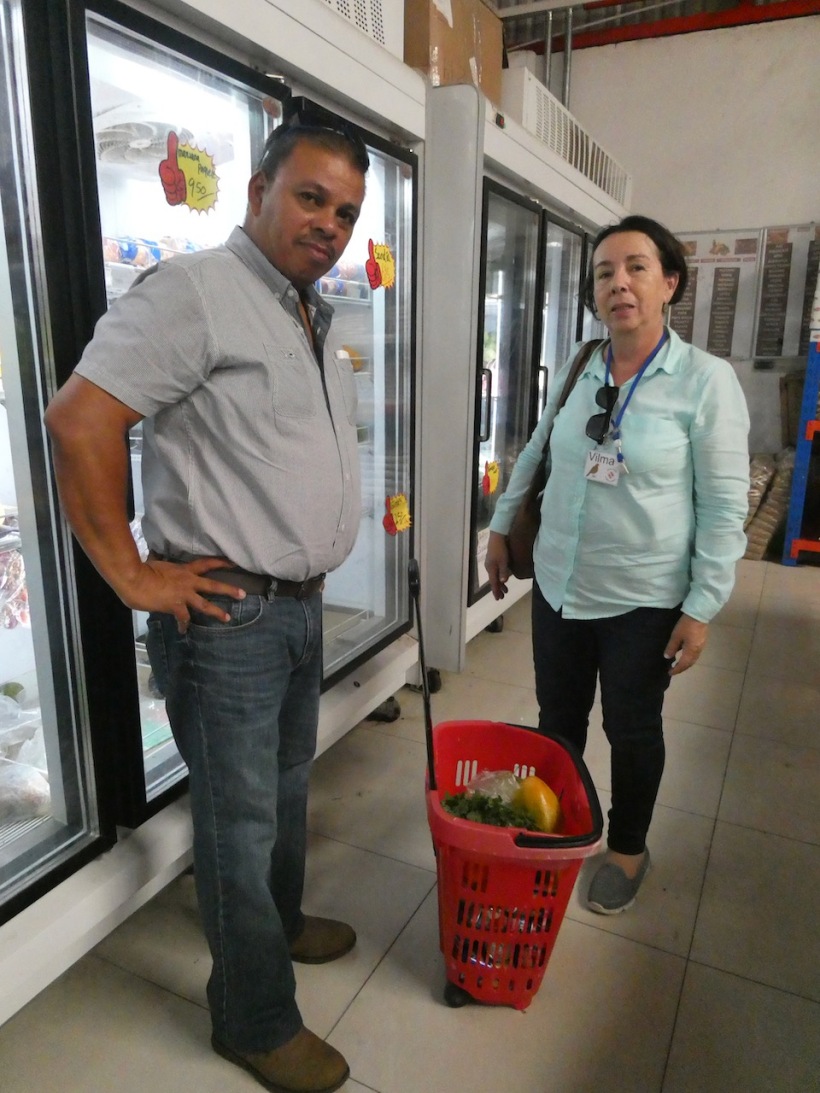 Then I purchased 7000 colones more onto each of my sims.  They didn’t take credit so I had to use the cash I was carrying.  I still have some US$ left but I may find myself at a bank ATM before I leave here.

When we arrived home, I took a photo of this flower. 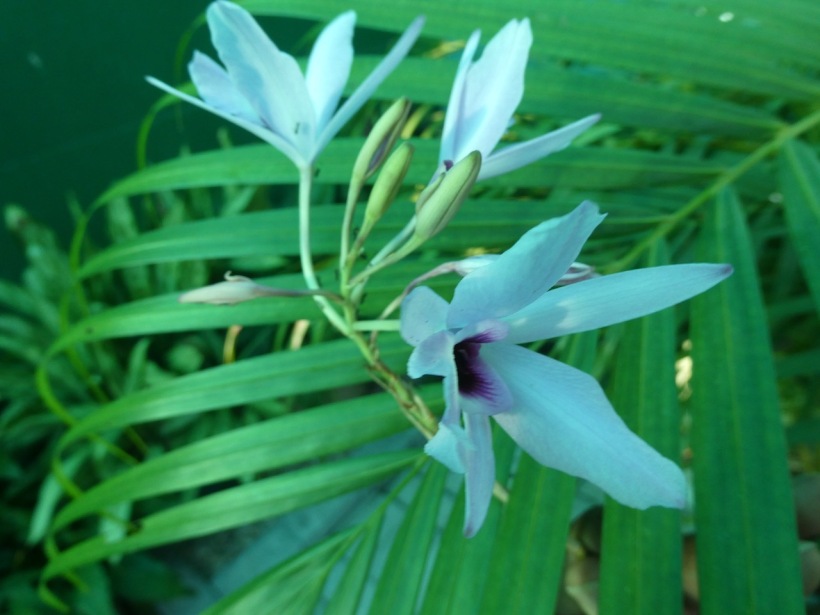 Sergio held it up by a plant to give me a green background.  It is the national flower of Costa Rica – guaria morada (Guarianthe skinneri).  It is a stunning orchid shining with purple hues and thin, rounded petals.

I have been enjoying writing this post as I sit in the enclosed (walled in) garden in the back of the casa.  They have many beautiful plants growing here.
Vilma and I have discovered that we can communicate pretty well using the computer (English to Spanish and Spanish to English) sites. We laugh a lot.
Daniel came home and we heard some music playing from across the street.  Daniel and I went outside to see if I could see them playing, but it was a private party.
I had told Vilma that I do ot like cooking much but I like to help out when somebody else is cooking.  She let me stir the pasta sauce.  It has meat, fresh tomatoes, garlic, cilantro, and some other ingredients that I don’t remember.  Daniel took our photo. 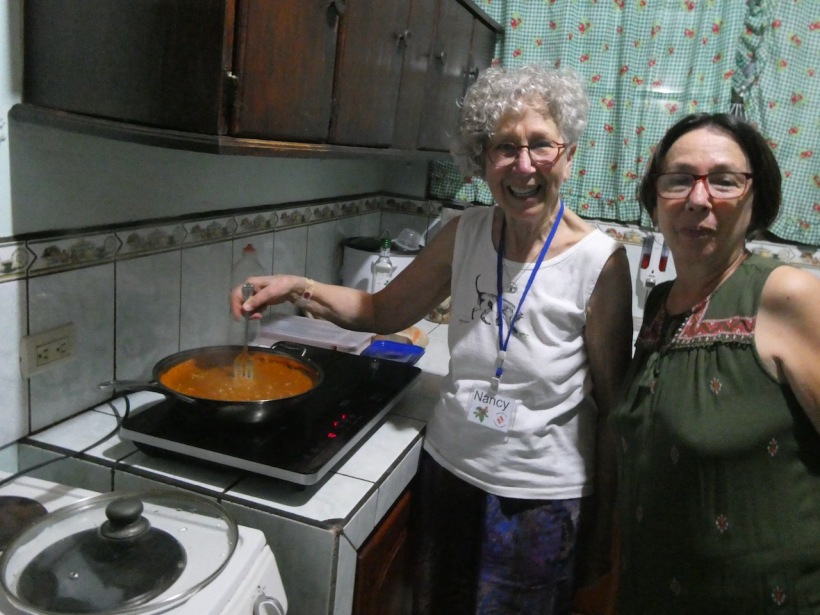 Daniel told me that his dad, Sergio, had made cashew nut juice.  He removed the flowers from these nuts … 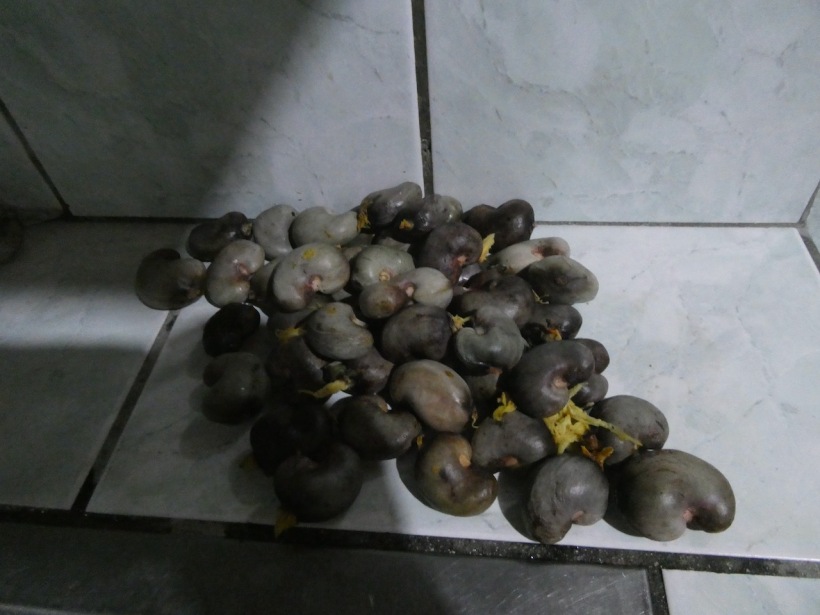 …by removing the flowesr and squeezing he juice out of them.  It was very tasty.  They will now roast the nuts and eat them.
Our pasta dinner was really delicious.  We also had salad.  I really enjoyed sitting and talking with Daniel.  Staying up so late last night really whipped me out.  Getting to bed early tonight is going to be such a pleasure.

One thought on “Liberia Area on Feb. 4th”