We woke up to more snow in the mountains this morning. Marty and I stepped out side to see the beautiful cloud formations over the mountains. 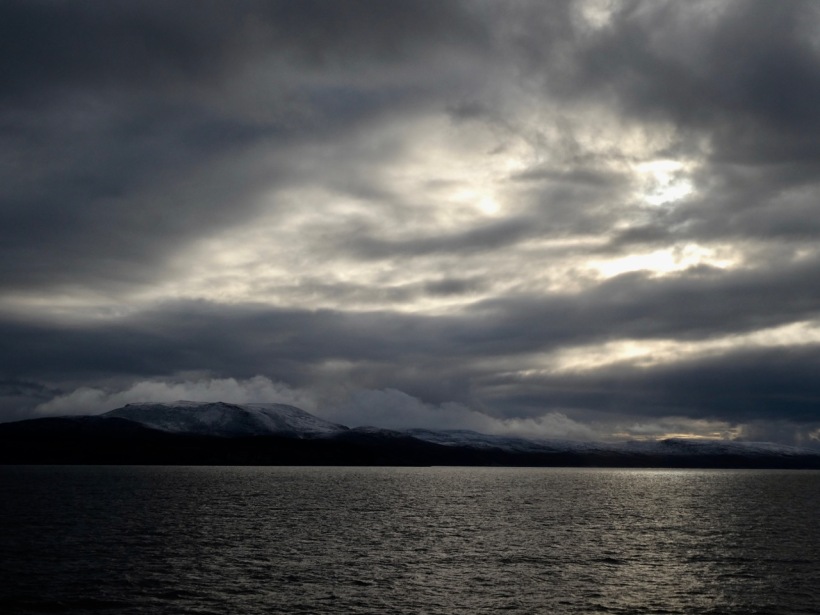 We were called to the 7th deck to view Snøhvit.   I took some photos on the way there. 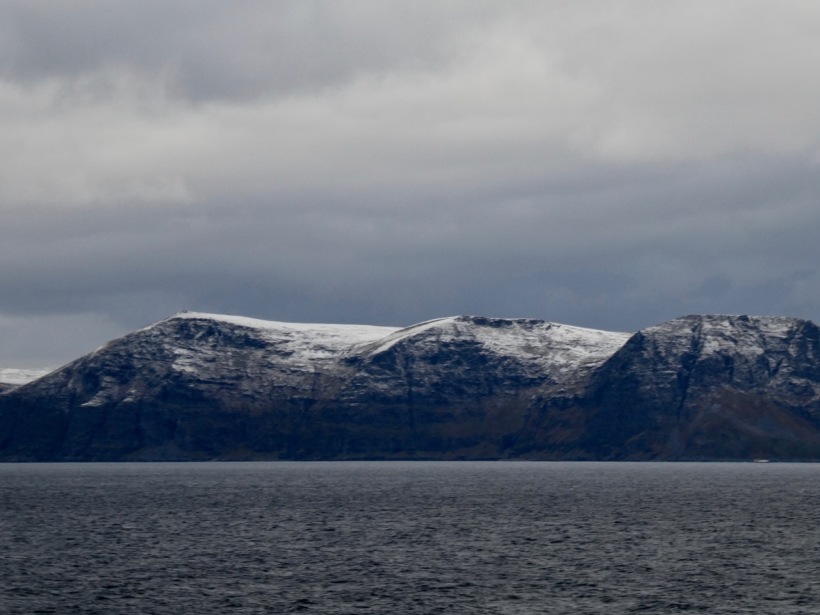 Before we reached Snøhvit I could see a building on the top of the hillside.  I have no idea what it is, but found it interesting.

I zoomed in on it but still didn’t know what it was. 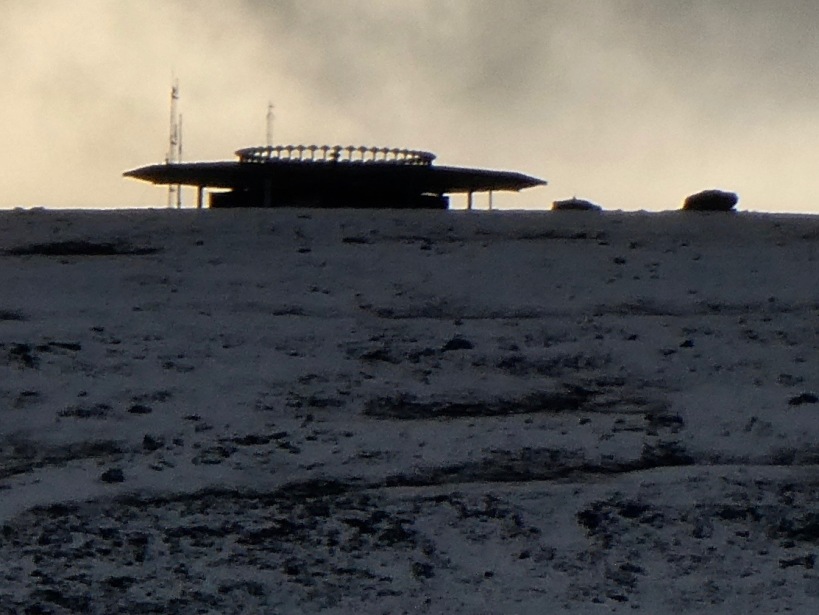 Snøhvit is the first development in the Barents Sea, and the first major development on the Norwegian continental shelf with no surface installations. Large quantities of natural gas are brought onshore and cooled down at the most northerly export facility for LNG, Liquefied Natural Gas.

Hammerfest LNG, outside Hammerfest in Finnmark county, is a facility that receives and processes natural gas from the Snøhvit field in the Barents Sea.

At first I thought the orange tanks were on the land

But we came around the other side and I realized that there was a tanker docked there.

We landed in Hammerfest close 10 11:00.  They literally docked in the middle of the main streets.

Hammerfest is the worlds most northernmost towns.  The town’s history includes several attempts by men and Mother Nature to remove it from the map, like after the hurricane that blew it down in 1856, and again after a devastating fire ravaged the town in 1890. But the worst thing was the Nazis in 1945, when the order came down that “no building be left standing”.

Some people walked up to the top of the hill to see the views but they walk way to fast for us.  So Janne, Sue, Marty, Ellen and I (along with others in the astronomy group) took a walk to see some of the sights.

The people who walked up to the top of the hill can almost be seen in this photo. 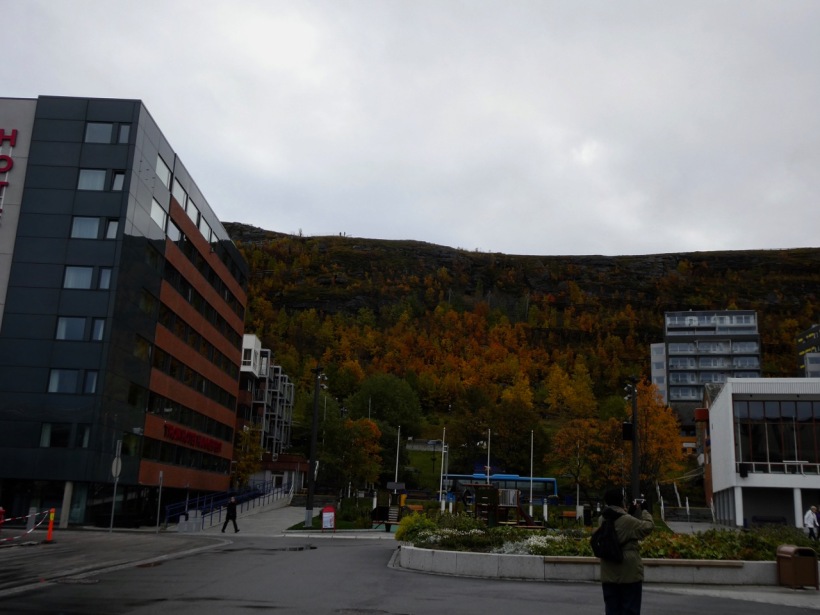 We walked up a short distance to the church.  On the way we saw another mural painted with an Aurora. 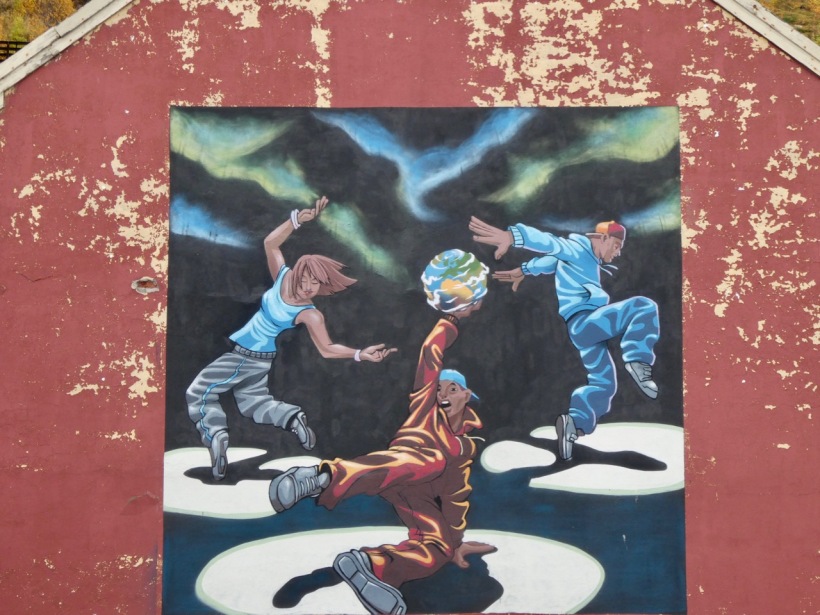 Hammerfest Church on the hill above the centre of the town. The triangular shape of the church is meant to symbolize the Holy Trinity. 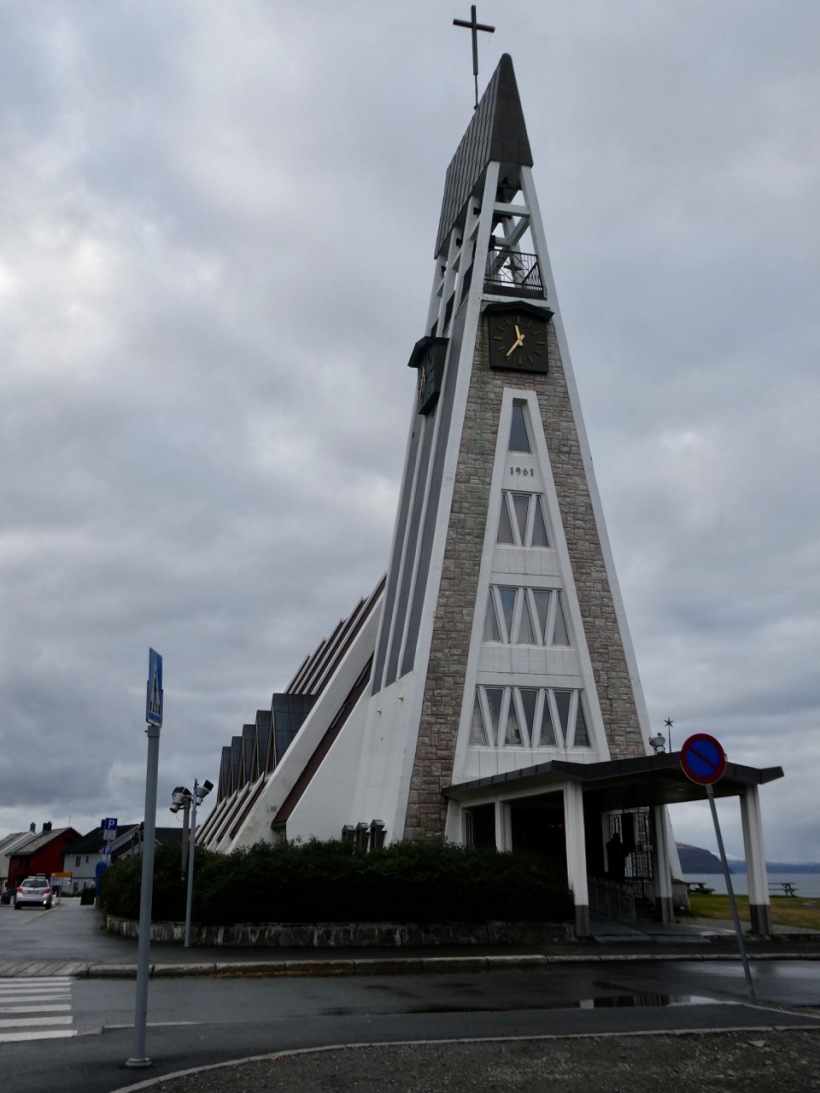 The interior is warm and welcoming, with a wooden ceiling reminiscent of an upturned boat.  This is the organ. 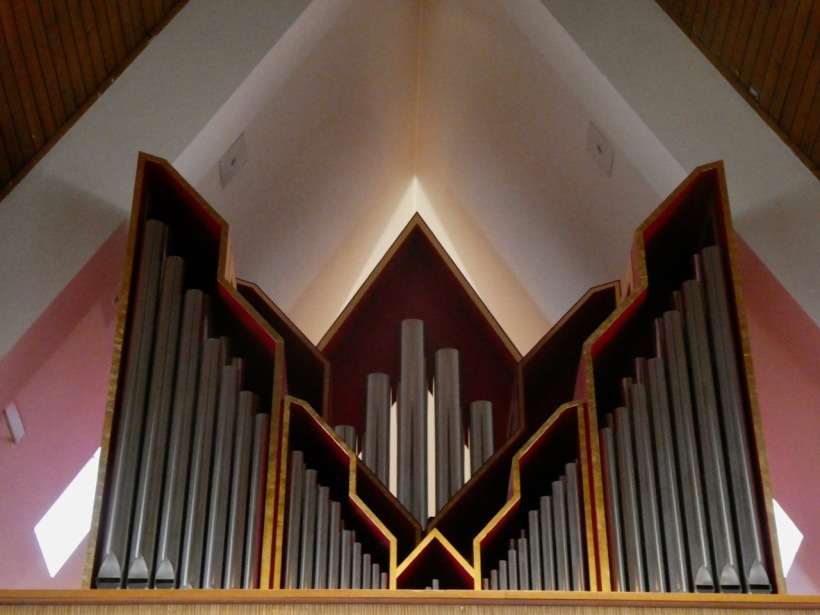 The east wall is adorned with a beautiful stained glass window made by Jardar Lunde.

This is a tapestry in the front of the church. 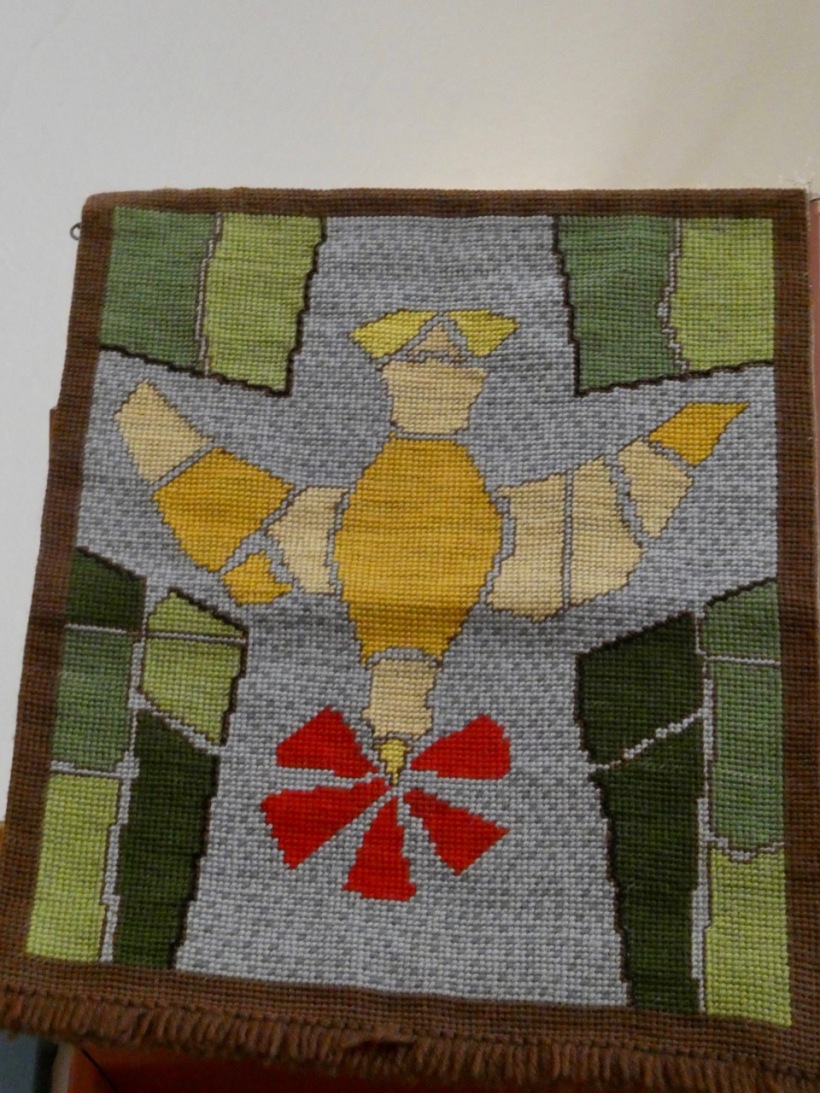 Smaller windows set into the low walls alongside the nave are decorated with Christian symbols in glass blocks. These are a few of them. 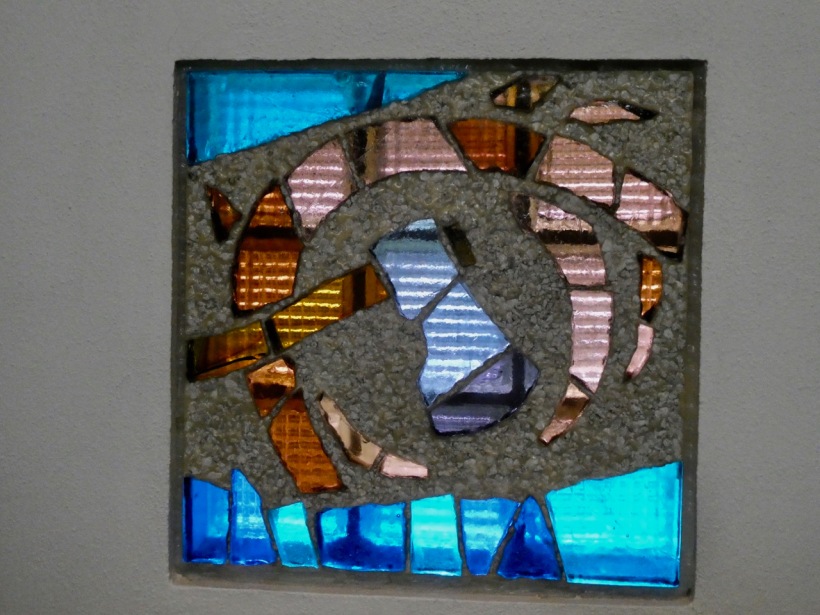 As we were leaving the church, Marty notices a sign in Norwegian.  It is one that we can actually understand. 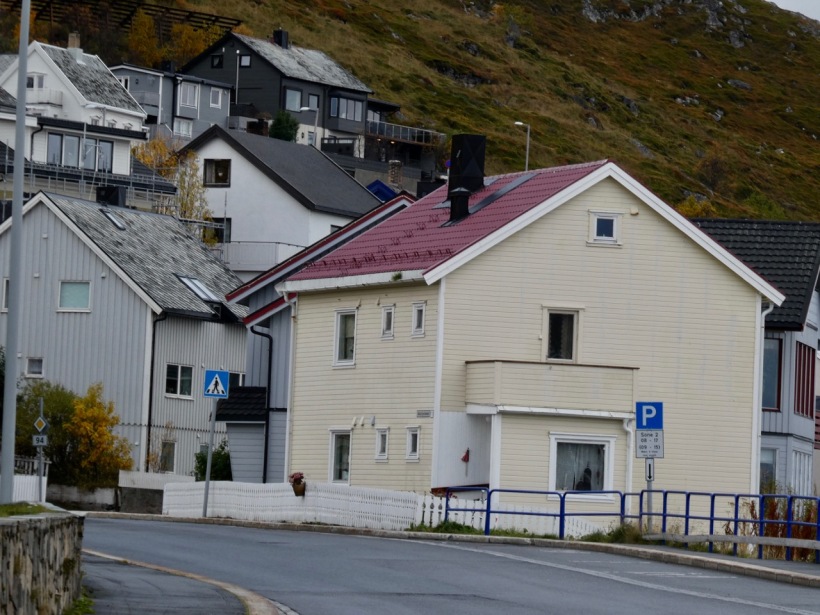 This sculpture of a boat is meant to symbolize a ship being stuck in the ice. 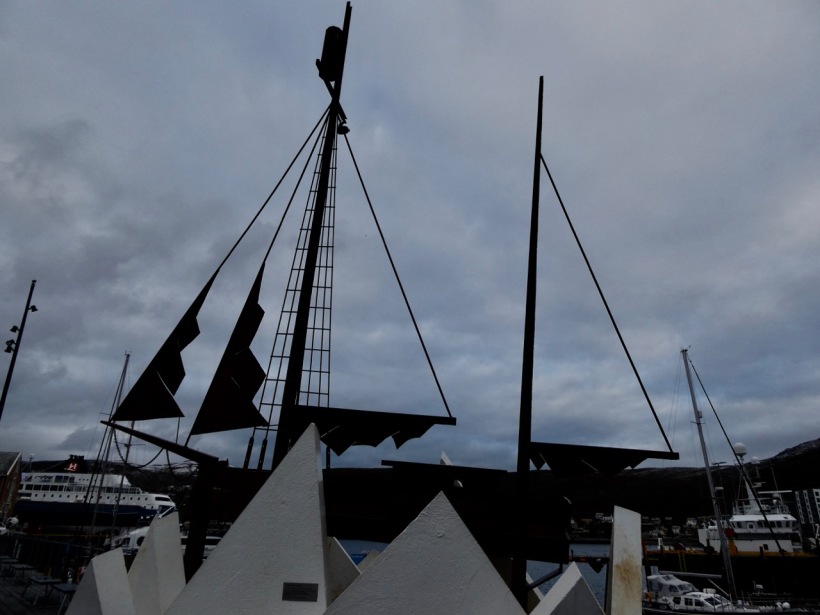 We liked this sculpture.

We spent some time in the Polar Bear Club which was established in 1993 and working to preserve the history and culture surrounding the Arctic nature, life and people..  Ellen purchased a couple of gifts and Marty bought a post card which I photographed. 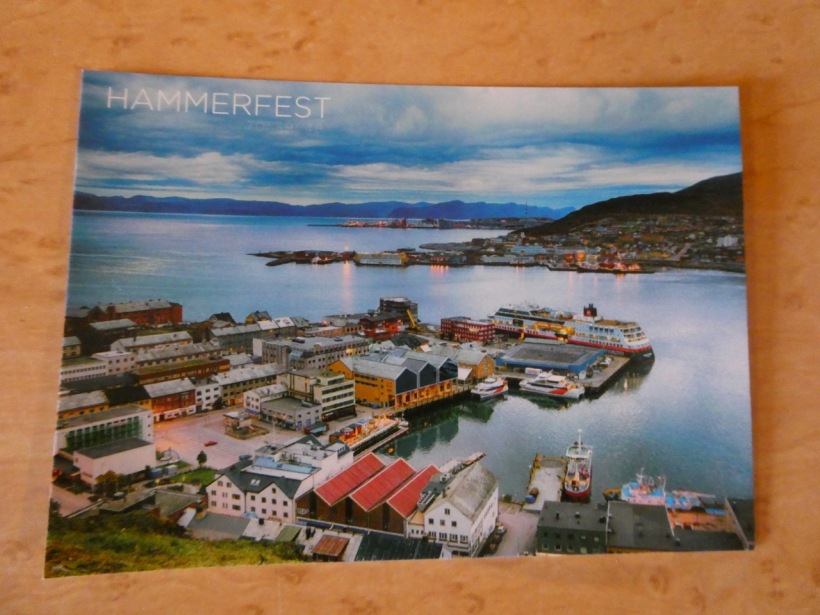 Today’s lecture by John was titled, “Distant Universe with Giant Telescopes.”  I love his enthusiasm.  He told us about the current telescopes being used to study everything in the Universe.  They are studying how planets beyond our solar system are being formed.  He described the technology of building telescopes. They are developing humongous telescopes and hope to have them completed by 2023 and 2025.  Even though I do not understand the science of all this, his enthusiasm is absolutely contagious.

Ellen, Marty and I took a walk around the outside of Deck 5 before dinner.  I love the snow on the mountains.  We have been passing awesome mountains like this all day.  Capturing the beauty with my little camera is almost impossible but that doesn’t stop me from trying. 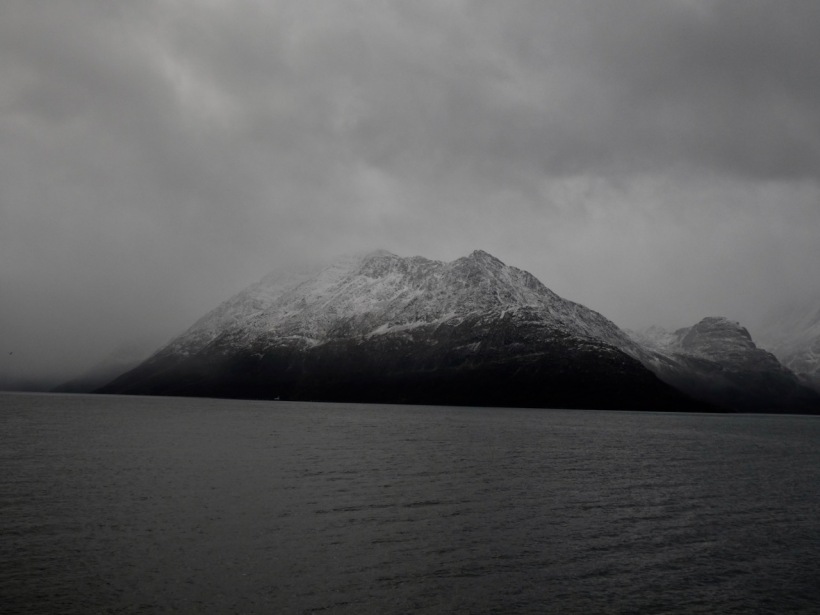 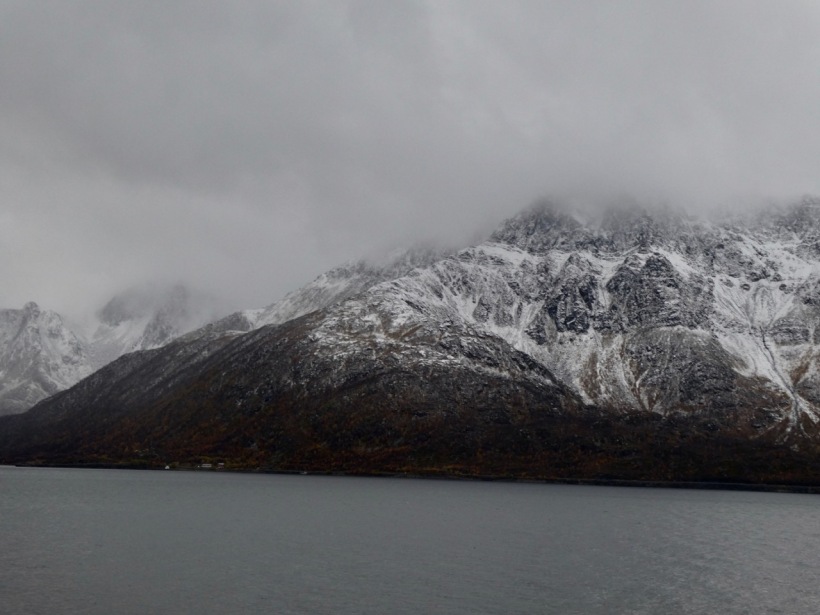 Just as we were walking they were walking, the ship was docking in Skjervøy for a short 30 minute stop. 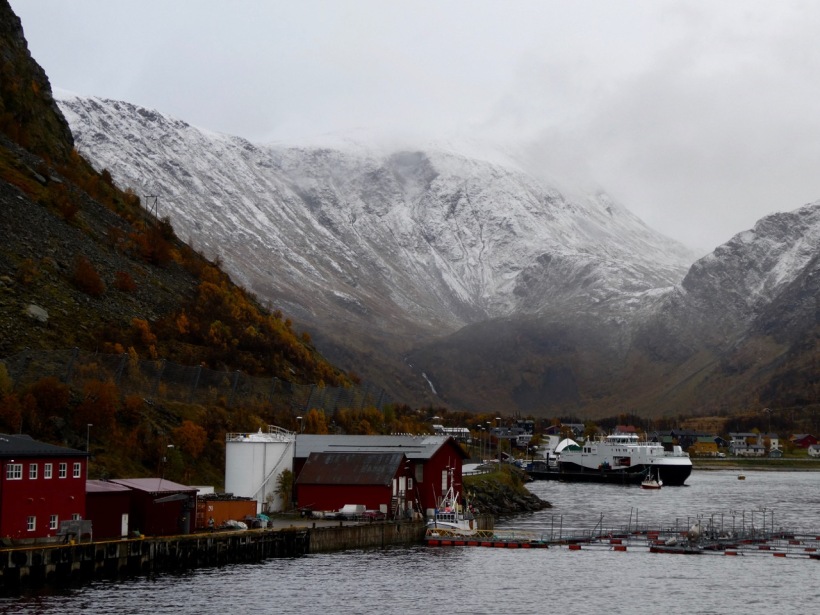 Gulls on the rooftop. 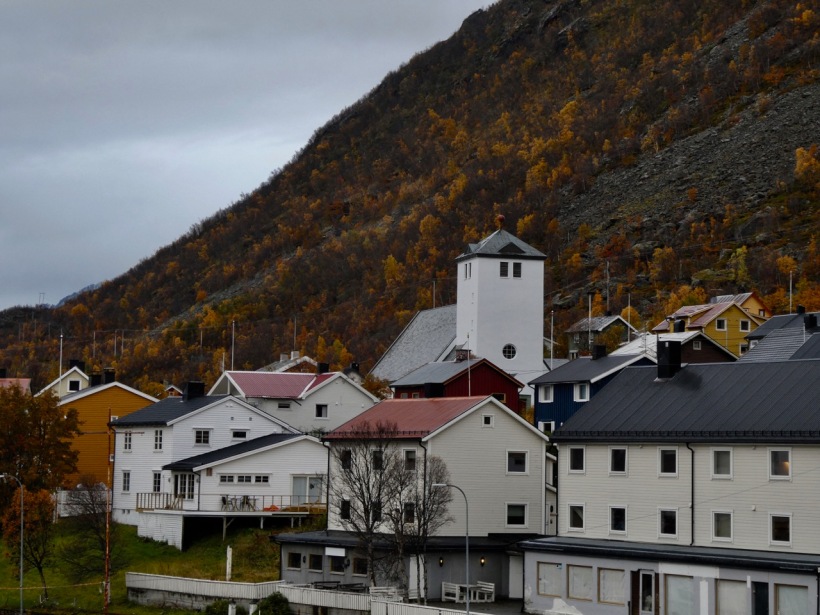 I even tried on panorama.

Tonight was another sit-down dinner.  We noticed that the woman who had been sitting with us, Jane from London, did not come to dinner again.  We asked the waitress to check on her.  Veronica, the woman who checks us in for almost every meal told us that she had left the ship the day before.  We were thinking that it must have been because of not feeling well in the rough waters.  I will try to contact her.  We were served.

Since we were going to go to the midnight concert in the Arctic Cathedral, we all decided to take naps.  I actually slept for about 90 minutes and was ready to go. We met Gerda and Water on the way and Marty took a photo of us.

We were taken by bus to the Cathedral.  It was just beautiful.  I wish I could have seen it in the daytime. I was able to take a few photos before we entered and of the inside. 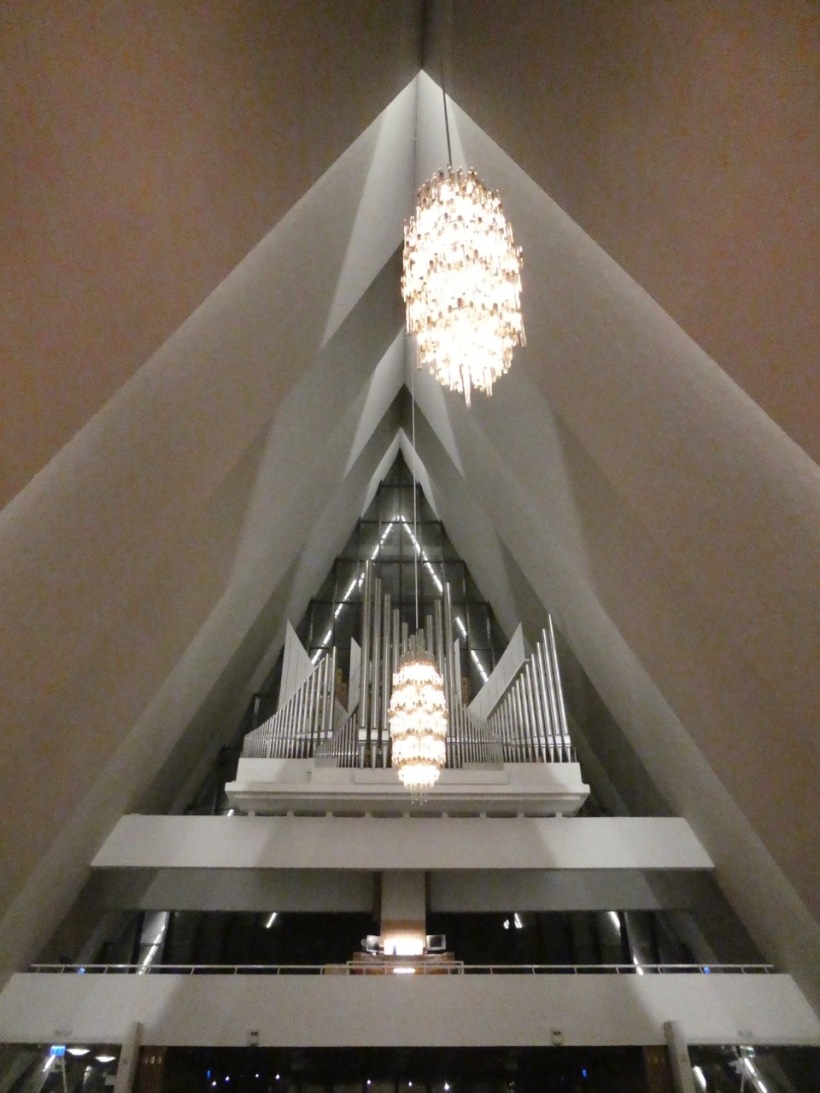 Ellen, Marty Sue, and Jane were ready to listen to the concert.

The music was so beautiful.  I loved the women’s voice.  We sat where we could see the keys of the piano being played.  The cello and piano playing were also so wonderful to hear.  Acoustics are fabulous.

I took a photo of the program. 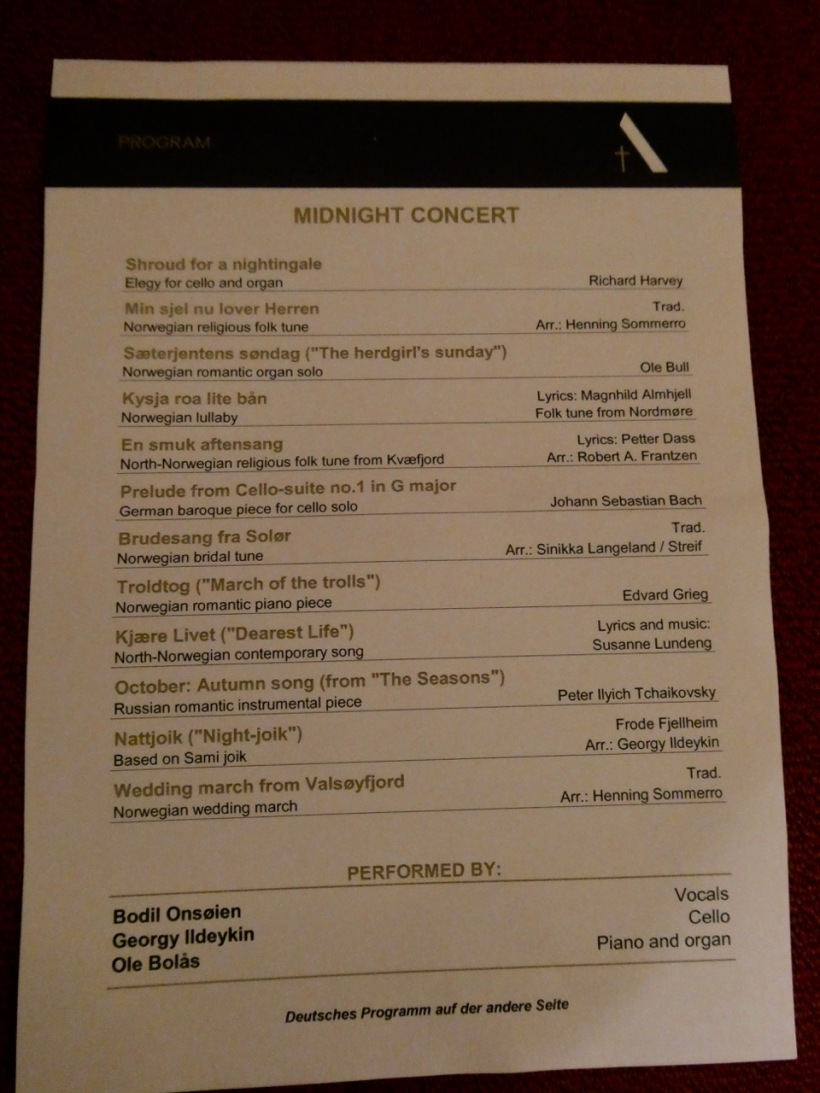 When we returned to the ship, i took another photo of the Arctic Cathedral from the deck of the ship before we departed.

It was cloudy so I didn’t think there would be any visible Auroras tonight.  We were so lucky to have seen the incredible display last Sunday.