Before we began our day both Marty and Ellen took photos of our group near the house. 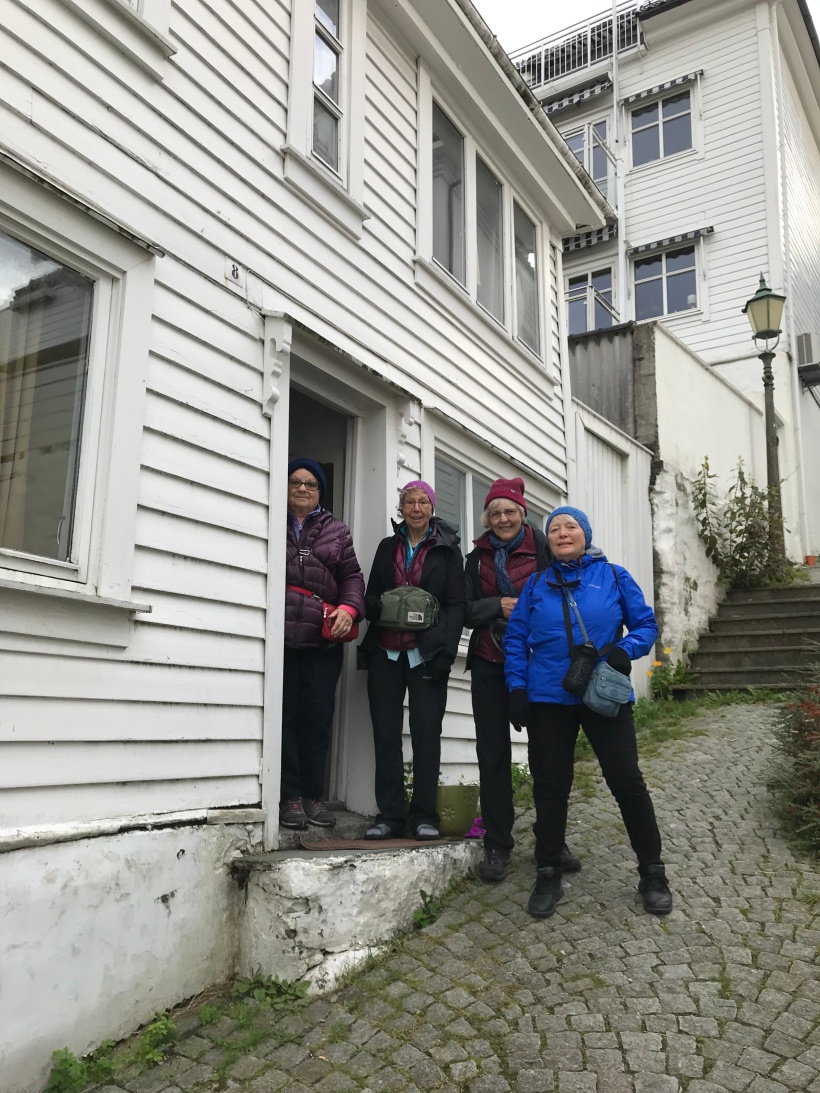 Ellen took a photo of me puttig our key back into the lock box.

By asking several people we found our way to the Bergen Light Rail (Bybanen) and took the light rail to the “Hop” stop.  Then we had a 10 minute walk up to Troldhaugen.  A woman who was out taking her baby for a walk showed us the way but walking all the way there with us.  She is an expat from Newfoundland.  Her partner works with oil and she has been living in Bergen for the last 7 years.  She loves it here.

Troldhaugen is the former home of Norwegian composer Edvard Grieg and his wife Nina Grieg.  The roof of the building was turf. 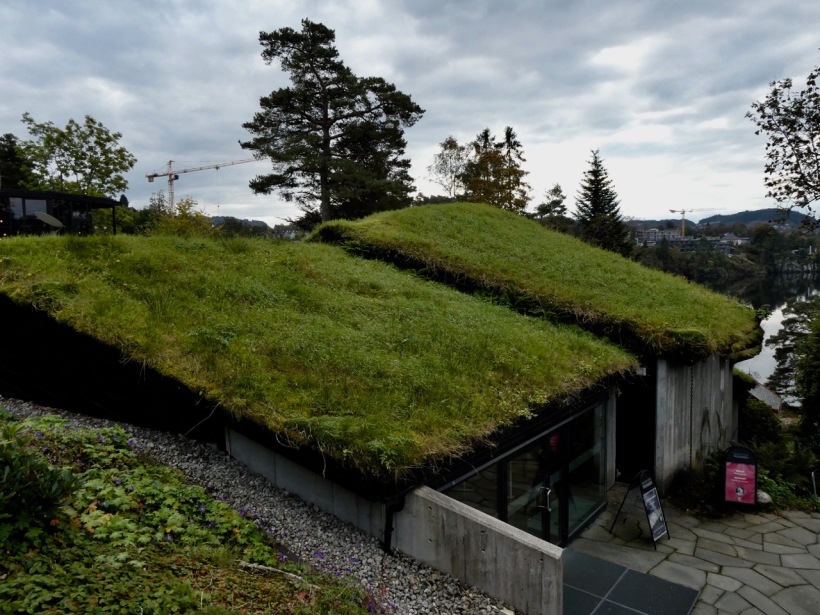 We arrived just in time for the tour in English.  We accidentally had perfect timing.  This is a statue of  Edvard Grieg.

This is where he wrote much of his music. 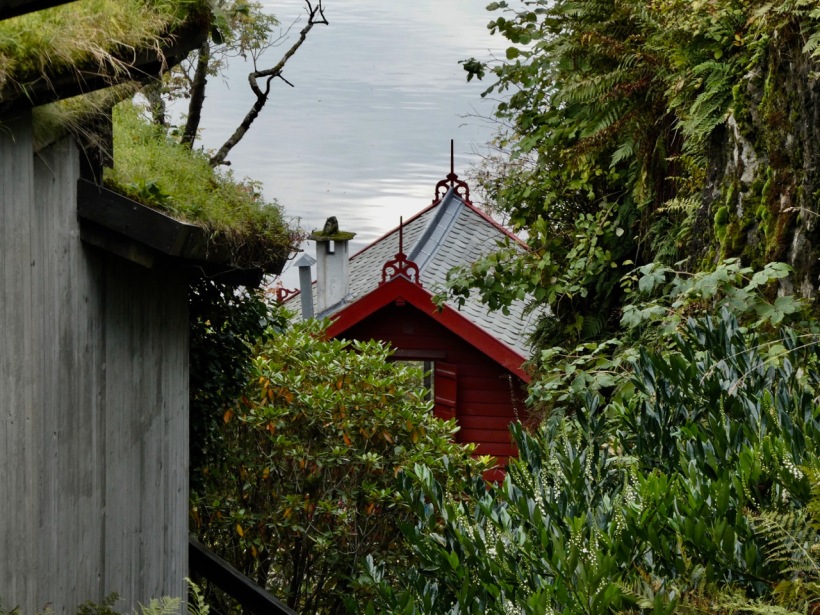 This is the home he shared with his wife.

The tour guide was very interesting. 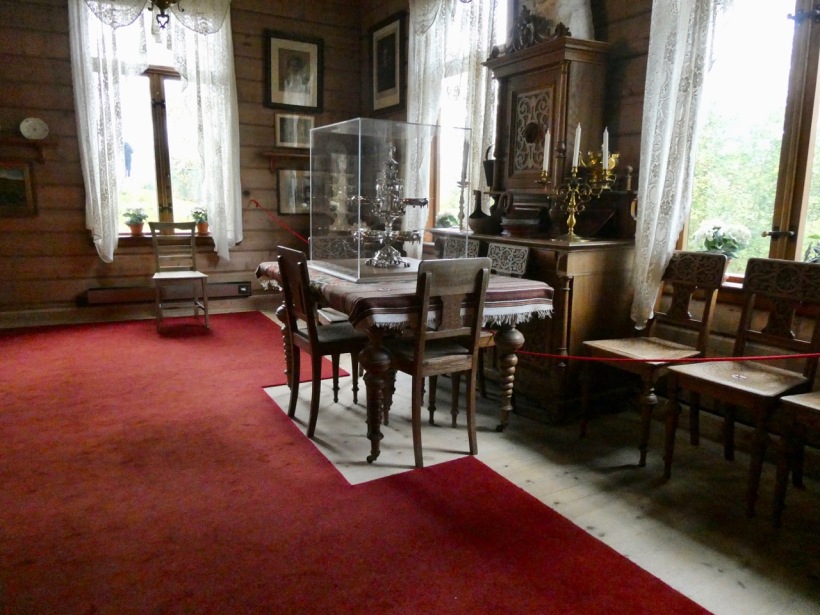 This beautiful Steinway was a gift to Edvard Grieg.

HIs music studio was certainly in a beautiful place.

After our tour we had lunch in the cafeteria.  Each of us ate heart shaped fish cakes  They had a very strange consistency but tasted okay.

At 1:00 we went to a piano concert of Edvard Grieg’s music in the beautiful concert hall.

Then we walked back to the train.  There were beautiful flowers on the way.

This was a lovely view along the walk. 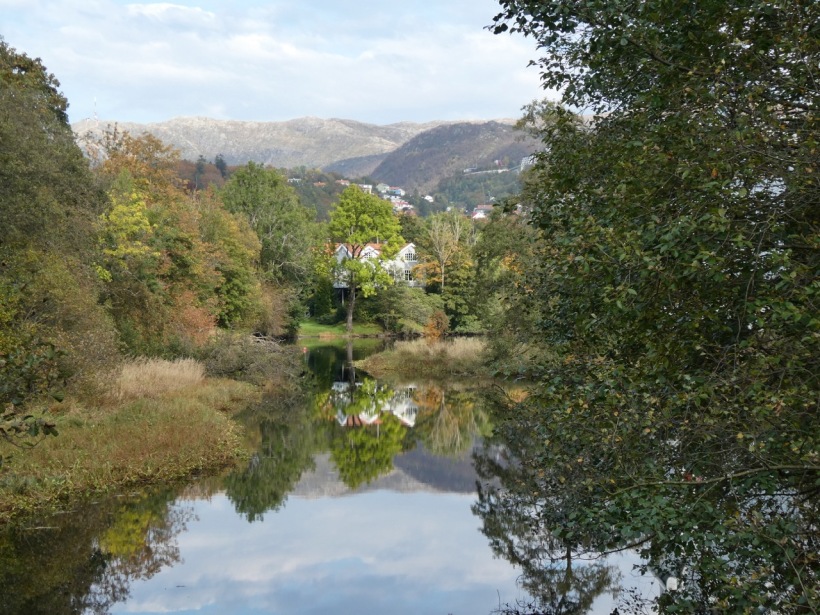 We took the train two stops back to the stop called Fantoft.  We walked another 10 minutes to see the Fantoft Stave Church which is is a reconstructed stave church which burned in 1992.  I took several photos of the outside of the church.

On the way back to our house, I took Marty and Ellen to see the fish market.  I had a chocolate ice-cream cone on the way back.

Tonight we went out for Chinese food which was very close to the house.  The man we met yesterday said it was pretty good  The restaurant was filled with Asian people and I thought that was a good sign.  Then we noticed that they had all been brought there by a tour bus.  We shared four different dishes (lamb, shrimp, chicken, and eggplant).  it was tasty.

One our walk back from the restaurant, I saw one of the manhole covers Sue said was so beautiful.

We took a walk in the area above our house.  I took several photos of the interesting staircase… 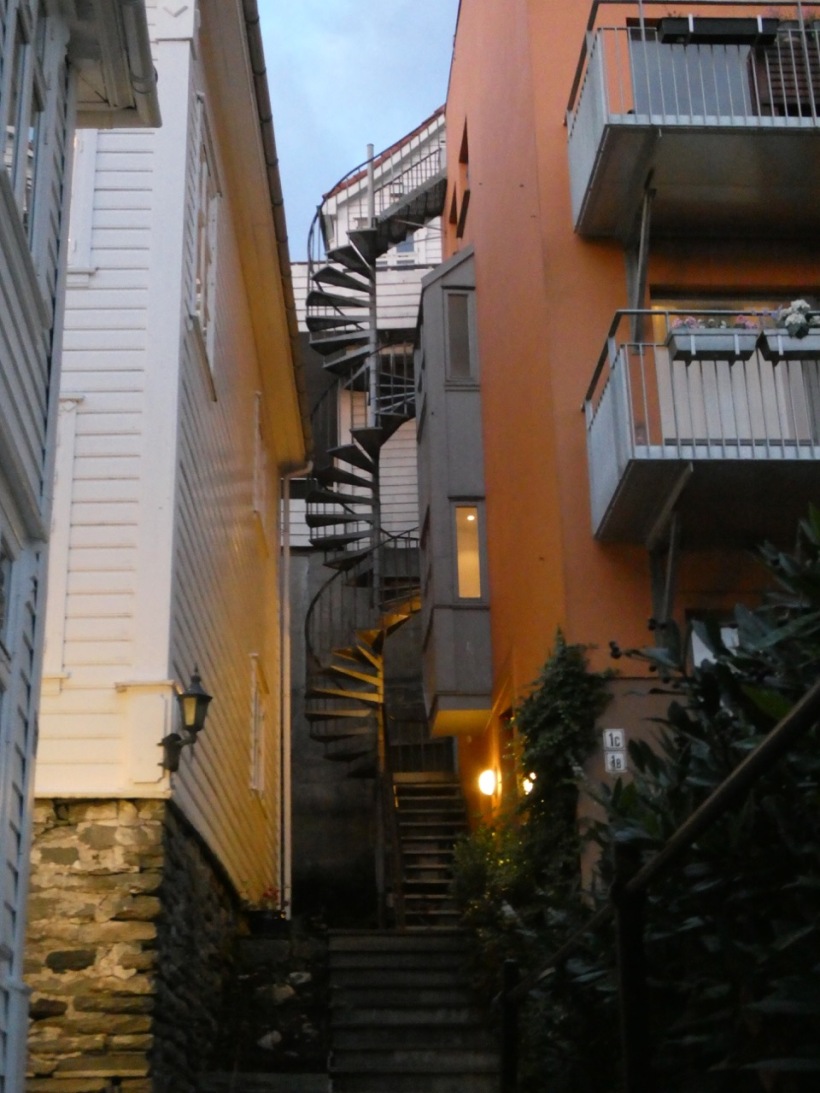 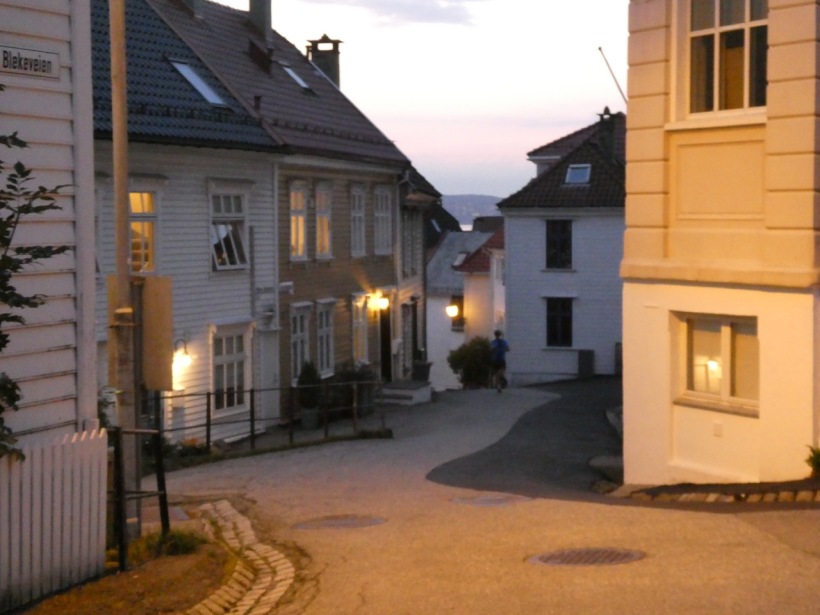 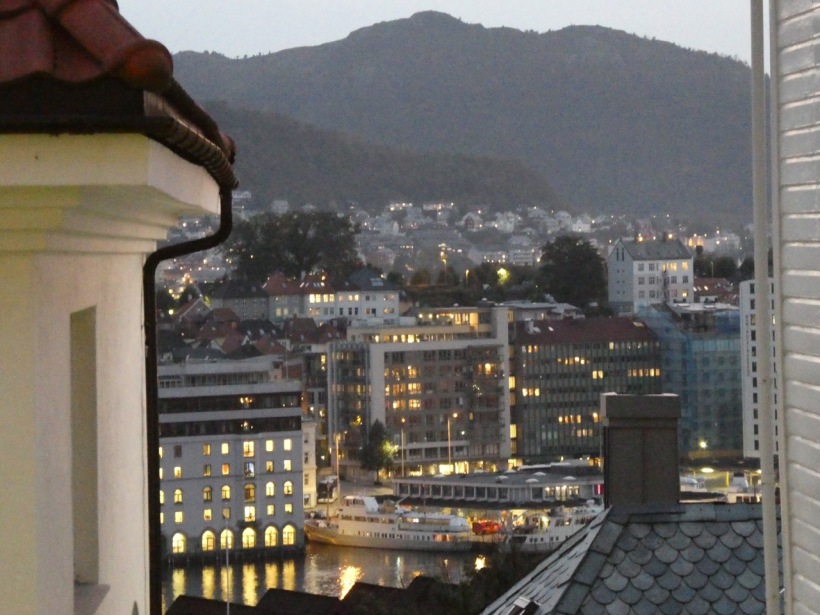 … was this previously for horses? 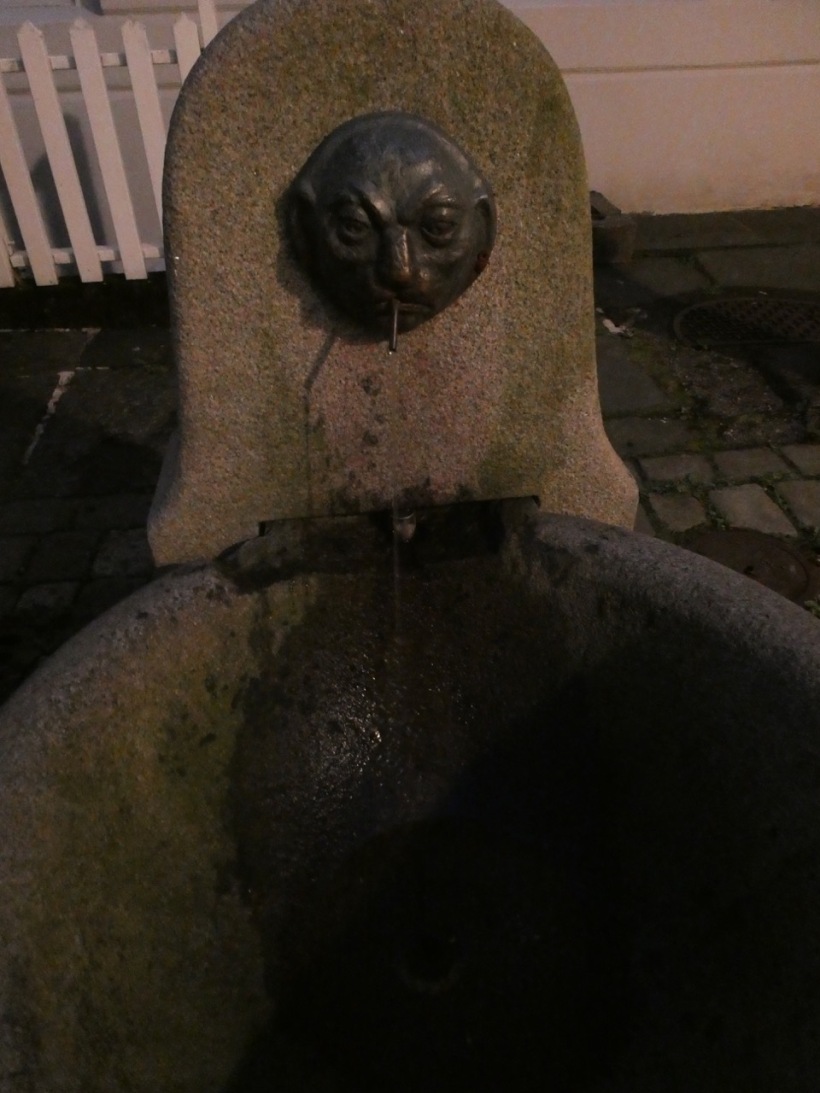 We found our way back to our house.  We walked over 6 miles today – another fun day in Bergen.