I learned more about the Flåm Railroad. It was a major challenge for railway engineers of the period to build a railway track from the Myrdal Plateau , down the precipitous mountain sides, to the bottom of the Flåm Valley.  The twisting tunnel, which winds its way through the mountain at several levels, is proof of the ost audacious and skilled engineering exploits in Norwegian railroad history.  The mountain line had to be laid along steep slopes and round sharp bends to enable the train to snake its way up and down the sheer inclines.  Almost 80% of the railway line has a gradient of 55%, the equivalent of 1:18.

The train takes about one hour to cover the 20 km long track, through 20 tunnels totaling a distance of six km.  Eighteen of these tunnels were excavated by hand labor from the railroad workers.  To avoid areas at risk from avalanches, the Flåm Railway criss-crosses the river and the bottom of the valley three times in the course of its journey.  Instead of building bridges, the river was led through a tunnel under the railway line.

We slept in this morning until after 8:00 and ate our breakfast of yogurt in the kitchen.   The fog in over the water and on the mountains was just beautiful.  We took off on a hike to Otterness which is about 2.5 miles from the edge of Flåm.  I called last night to make a reservation for lunch but found out that we can hike there but it is actually closed for renavations.  So no lunch and no guided tour of the area.  But walking is what we wanted to do so we went anyway

It was wonderful walking in the fog and I took some photos of the water, boats, and mountains. 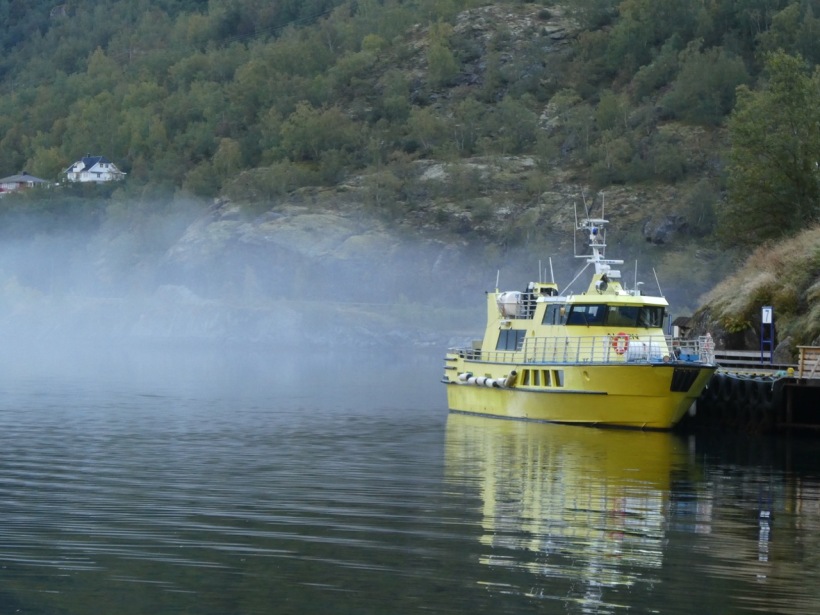 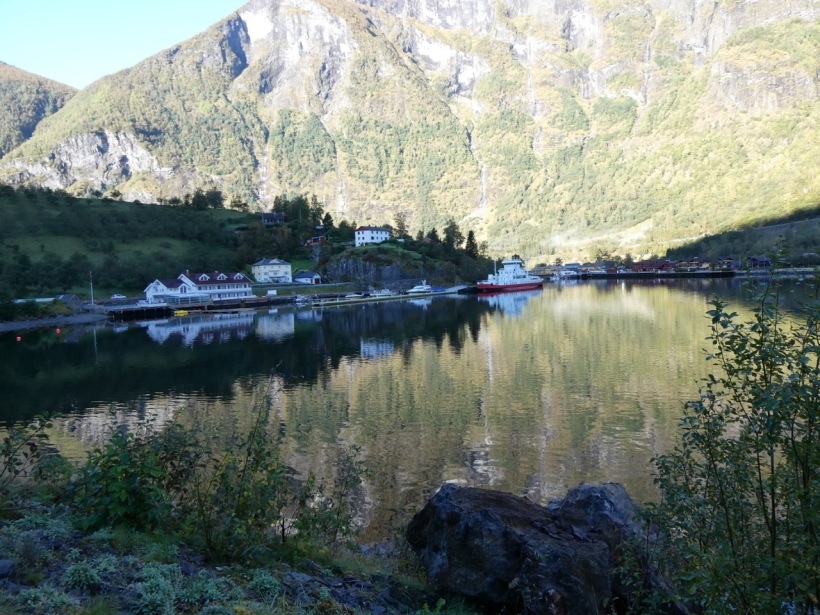 I loved the ship passing between the streaks of fog. 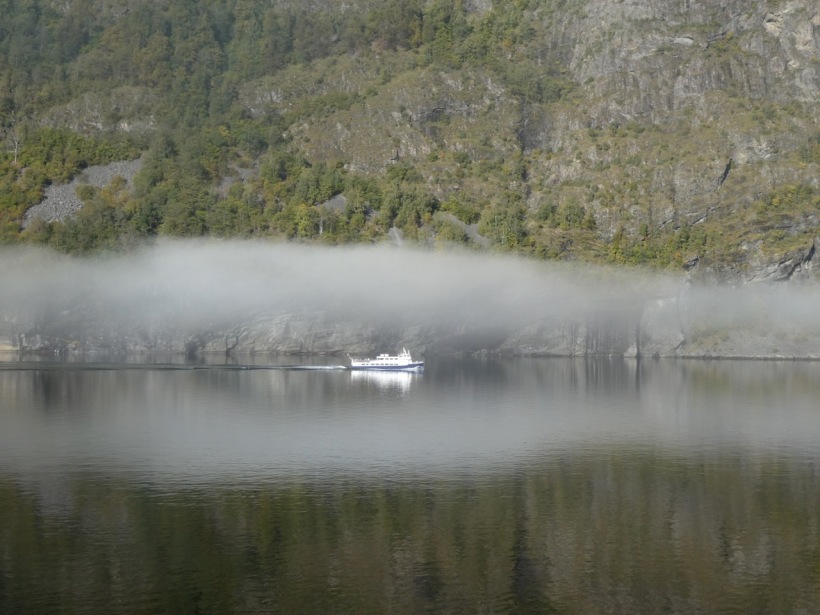 Every once in a while there was a stone plaque with a drawing of a rock carving.  I made a collage of them.

This man looked so peaceful fishing from the shore.

I think that the speck of a boat in the water is the one we will be taking tomorrow  morning.

Everything was so serene. 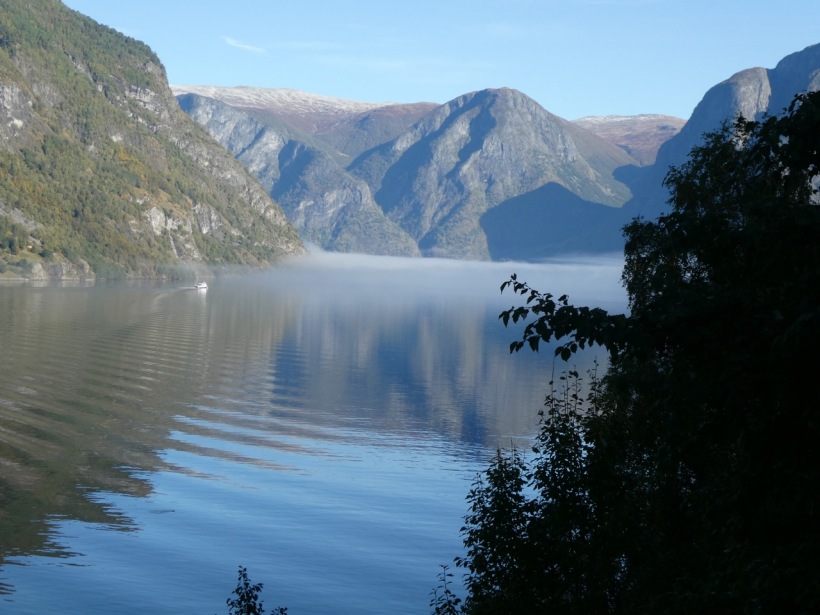 Most of the walk was along a bike path and very close to the road.  Finally we saw a sign that indicated a 5. km hike up the hill to the farm.  As we were walking a couple of cars went by us but then there was one coming down the road.  The two cars going up had to back up down the road a bit to find a place that was wide enough for the one coming down to pass. 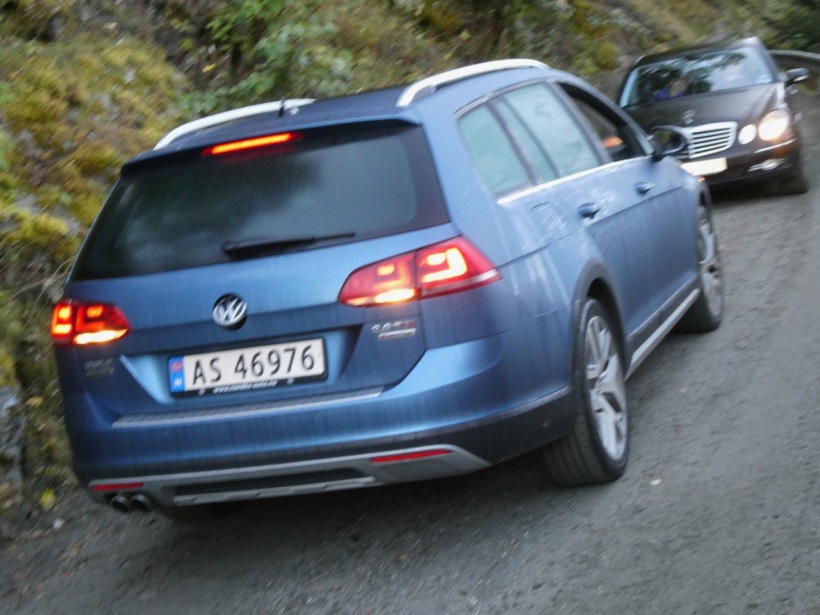 The farm at Otterness were early inhabited and one even has traces from the settlement from the year 300 AC.  Ancient graves across the fjord indicates that people have lived around this area in pre-Christian times.  The farms consists of 27 buildings and every one had a different function.  The buildings are ostly unchanged today and stand as they were in the 18th century.  The oldest houses dates back to the 1700.

I took several photos of the buildings and enjoyed the views over the Aurland Fjord. 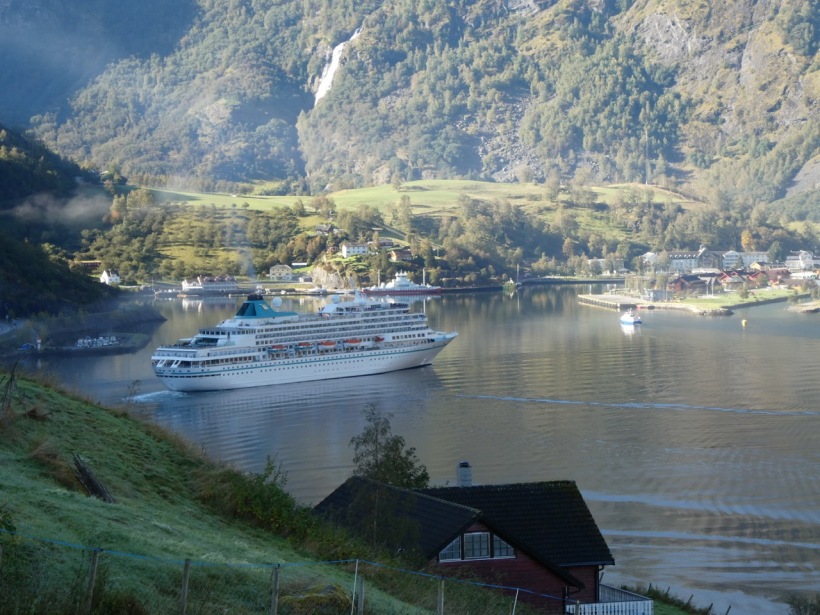 I picked some apples from a tree but didn’t use this ladder.

We could see the waterfall were we would have liked to hike in the afternoon but the trail was closed. 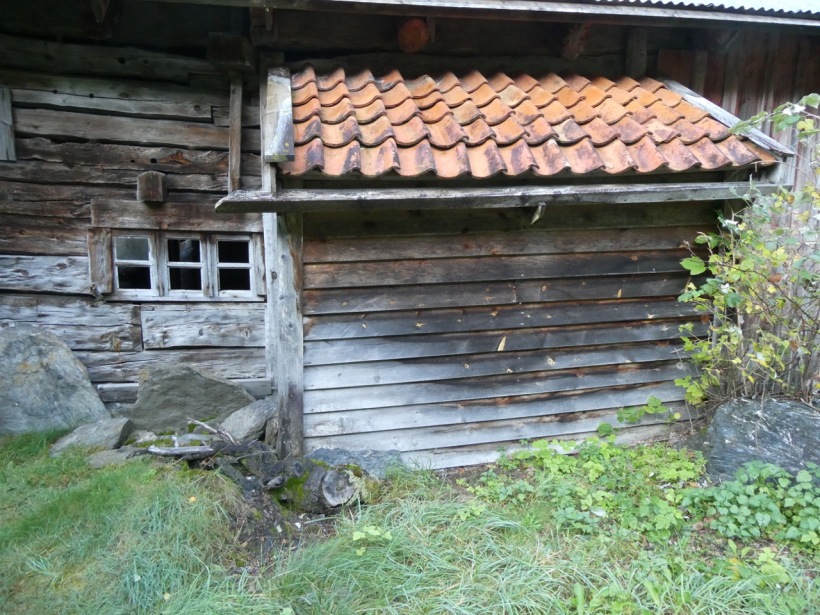 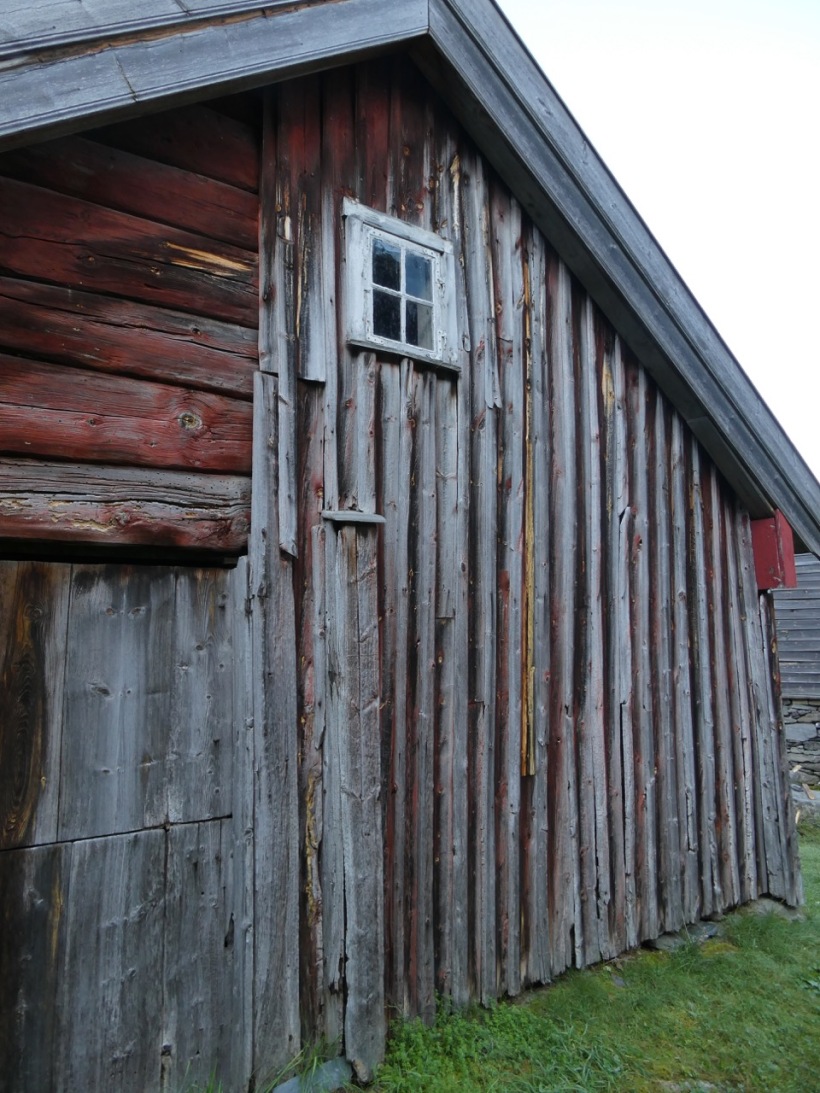 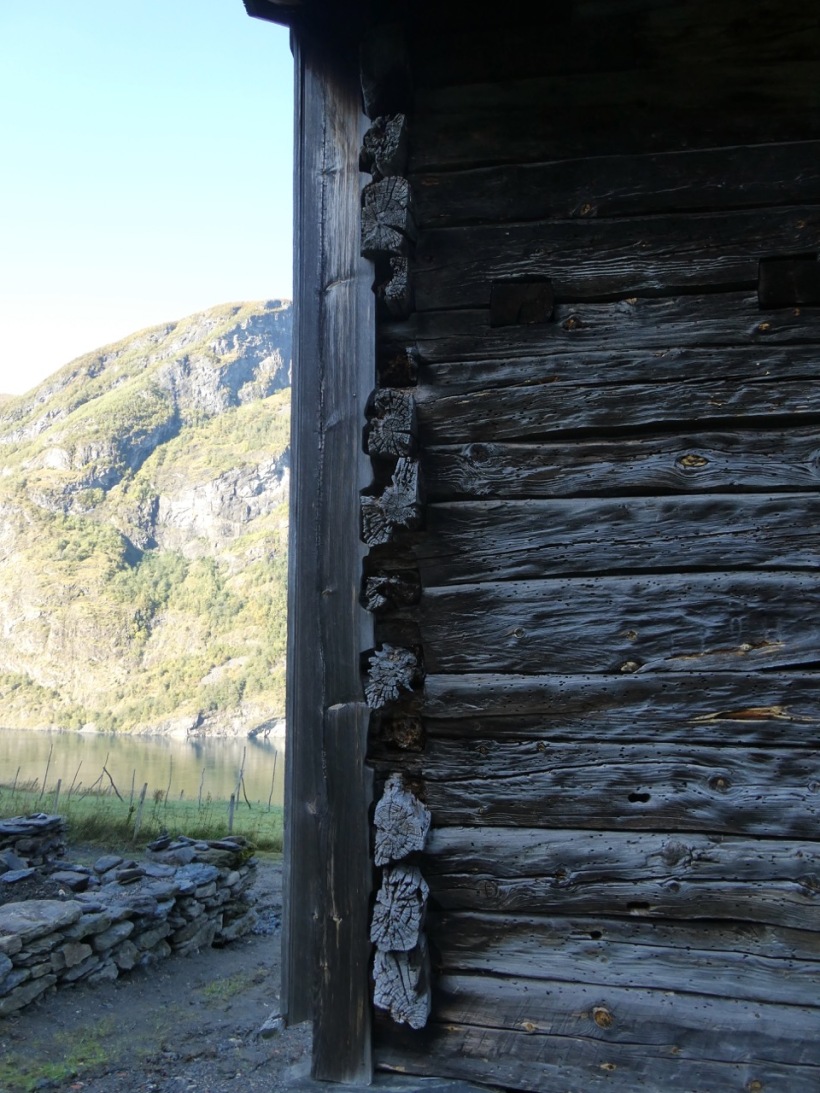 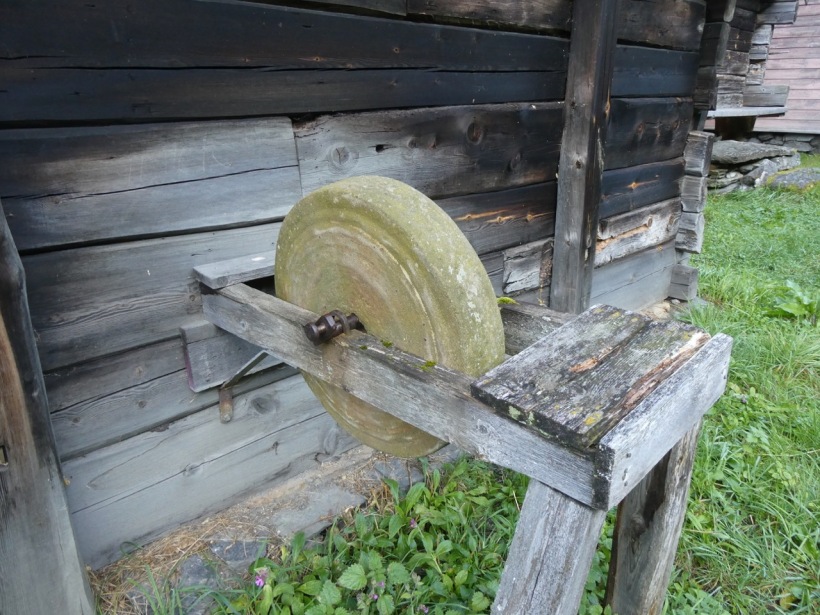 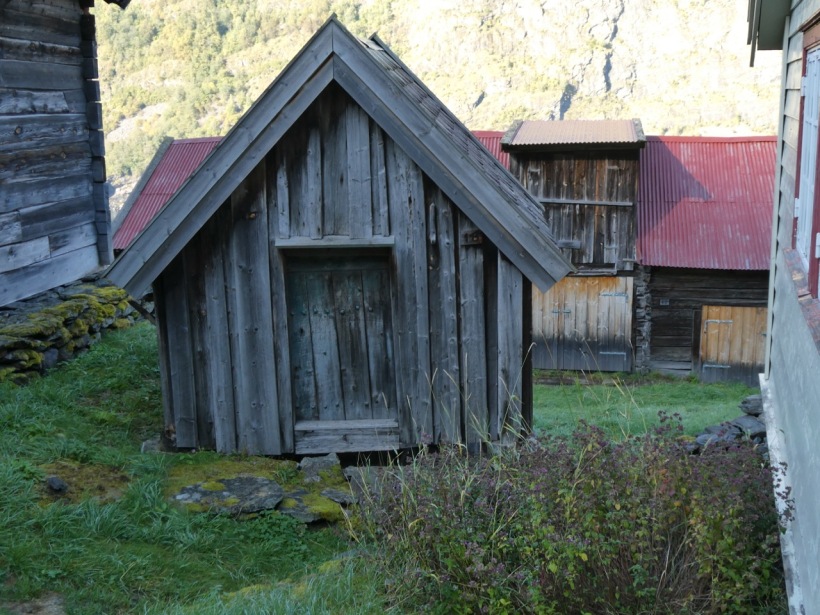 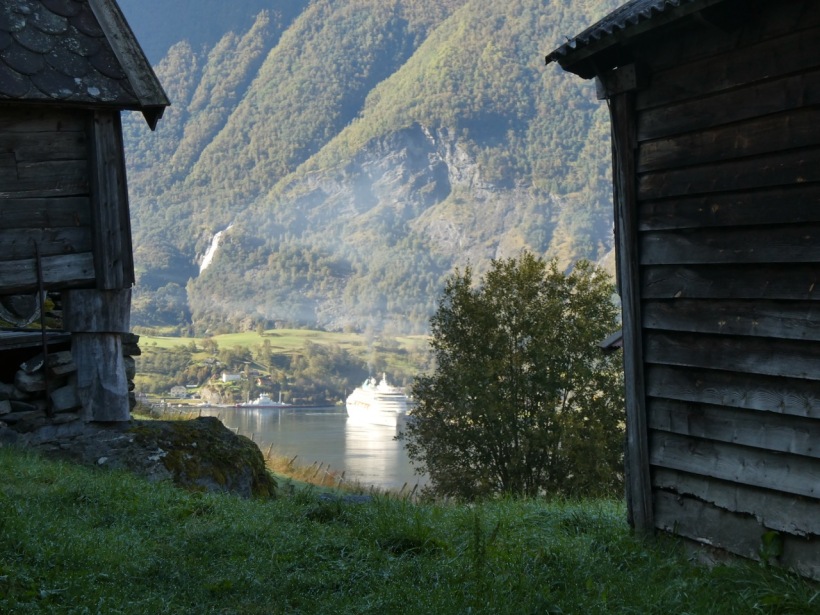 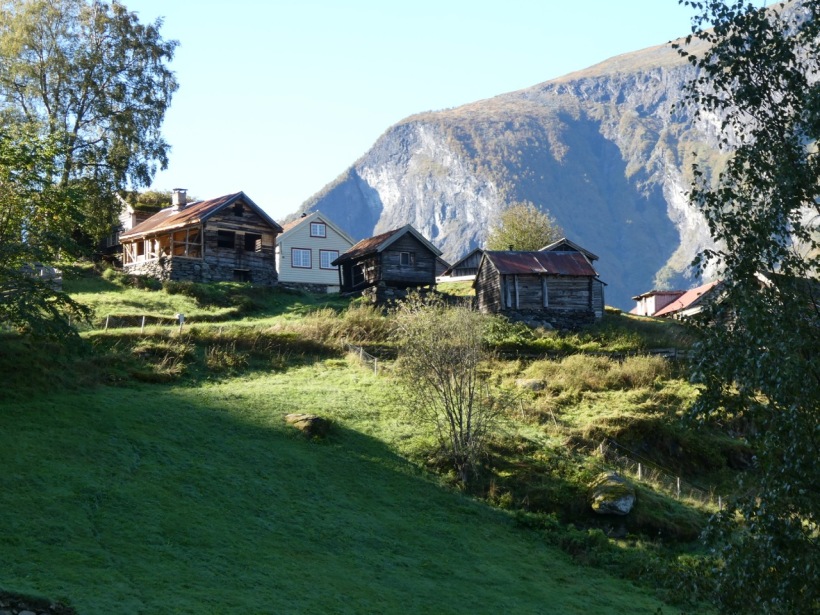 The fog had cleared as we walked back to Flåm.

We stopped at the Coop to buy some cheese and crackers and had a lovely lunch outside of the Hostel.  Then we took some time to relax.

This evening we took another walk up the hill to look down at the fiord.  Of course, I took a few photos of both the views, plants, and artwork along the trail. 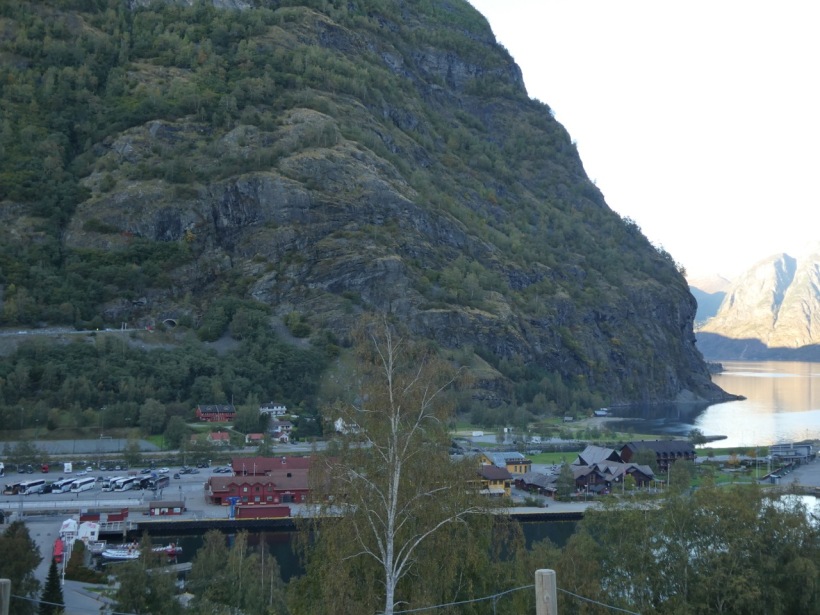 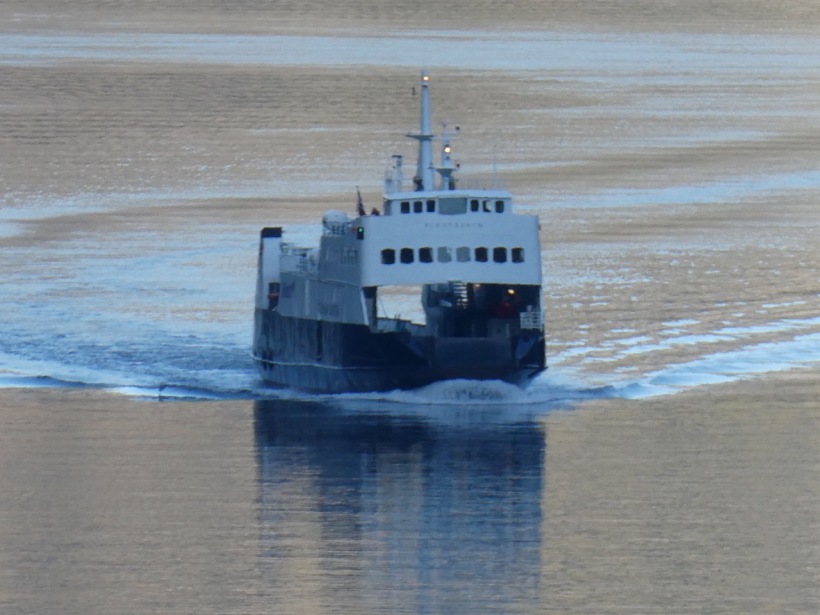 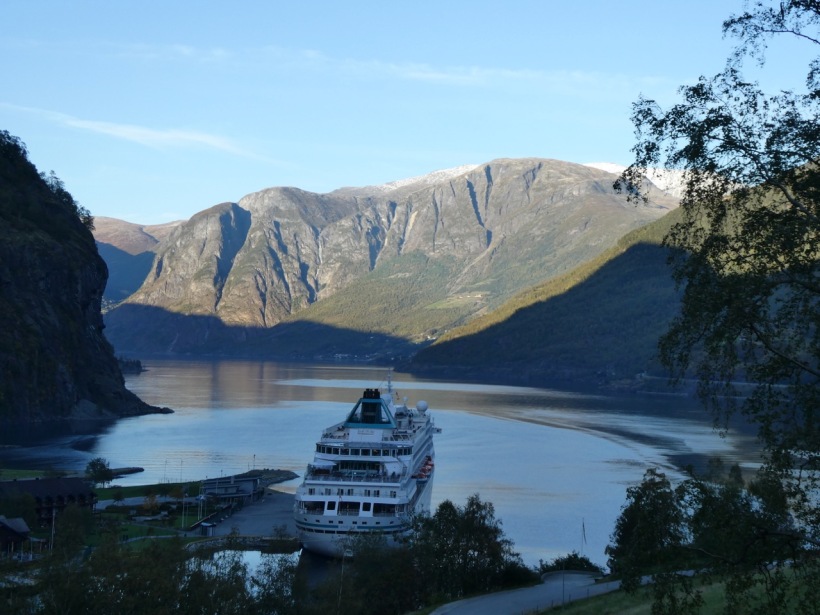 We had not idea what was the purpose of this metal tree.

We visited the Flåm Museum where we watched a movie about the railroad and saw many interesting displays.  It was a well done museum.

Tonight we went out for dinner in a nice restaurant.  Jane and Sue had a delicious salad with shrimp and salmon.  I had a venison/pork burger that was wonderful.  Since ai asked him to bring it without a bun, he brought some delicious butter.  It was a great dinner. 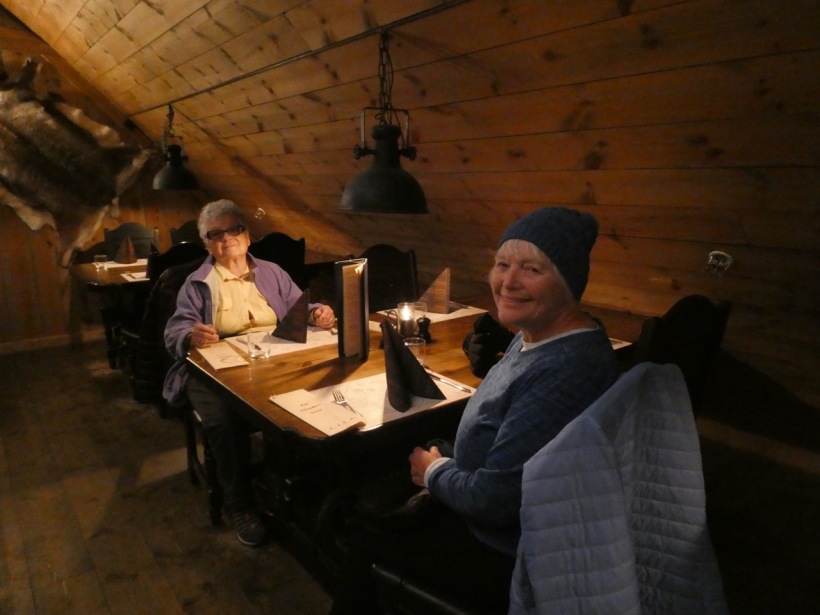 Tonight the streets were bare.  It is either because it was Sunday night or because we did not stay out as late last night.  We have been so lucky to have such beautiful weather.  Tomorrow we will travel to Bergen via boat, bus, and train.