After breakfast Jane, Sue, and I went out for a walk by the lake.  It was in a different place than I walked yesterday.  There were lovely views of the lake with the church in the background..

I was able to take a close-up.

The water bu the shore was lovely.

We sat pm tje decl pf the back deck of the lodge for a while until it was time to walk back to the train station.  The uphill walk took some effort but we all made it.

There were some young adults on the train with us.  They were carrying boxes of muffins and desserts.  I asked them were they were  going and he told me they were going to a wedding in the town of Finse.  They had to take the food on the train because there is no way to get to Finse by car.  The wedding was to be in a small hotel in Finse.

The views of the lakes and mountains were beautiful  We went through a very, very, long tunnel.  The engineering to build this train was amazing.

We had to transfer to another train in Mydol.  There were many people on the platform.  I took some photos of a waterfall….

and other structures in the town…

… and some buildings.  I love the steeply sloped roofs. 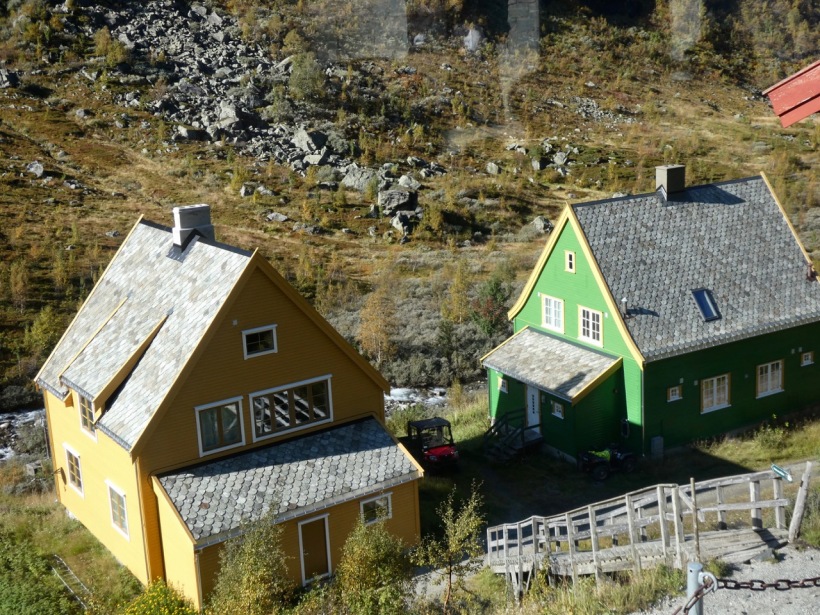 I spoke  to a man who worked for the railroad and asked him if people could drive to Myrdal.  He said, “No.  Only small cars can fit on the very narrow roads;”  I also asked him how many people live here.  I was really surprised when he said that there were only 2.  So I asked him who lives in the above houses and he told me that they were for people who worked for the railroad and did repairs.

The train to Flam was very, very crowded. It turns out that people from a cruise ship take the train from Flam to Myrdal and then back to Flåm before getting on the cruise ship.  The Flåm Railway has been described as one of the most beautiful train journeys in the world and is one of the leading tourist attractions in Norway. The train runs from the end of Aurlandsfjord, a tributary of the Sognefjord, up to the high mountains at Myrdal station.

The views from the train were wonderful but not photographable because of the glare on the windows.  I only took one shot.

We reached an opening in a tunnel where the train stopped and we were allowed to disembark to take photos of the Kjosfossen Waterfall.

And I took another one of the waterfall. 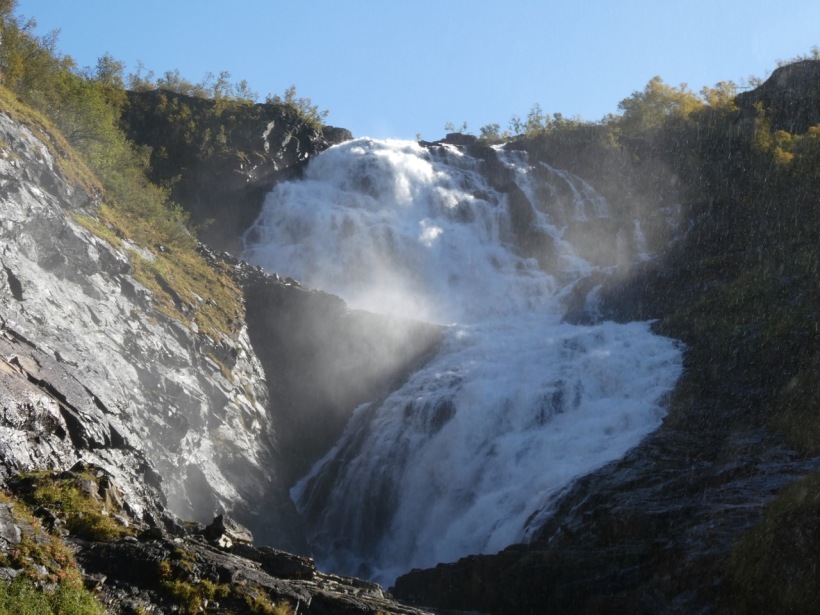 Then I heard music and somebody pointed out to me that there was a woman who was dancing on a wall near the waterfall.  I read that it is sung by Huldra as she is luring men,

I attempted a couple more photo from the train.

Very close to Flam we passed this church.

In Flam we walked to the Hostile.  The 3 person shared bath room was on the second floor so we upgraded to a room with a private bath.  When we got to the room, we discovered that there were 2 bunk beds and very little room.  What a change from yesterday.  Sue took the mattress off of the bunk and put it on the floor.  We found space for Jane’s and Sue’s suitcases and I put mine under my bed  Success.

Then we walked around town for a while looking in stores and went out for fish soup for dinner.  Since it was so early, we relaxed in the lounge for this place.  It actually was pretty nice and except for being crowded in our room and WiFi quitting over and over again, it isn’t bad.  Looking forward to a hike tomorrow.