First thing this morning I decided to walk outside the hotel and not go very far so I could take a photo before all the people arrived. 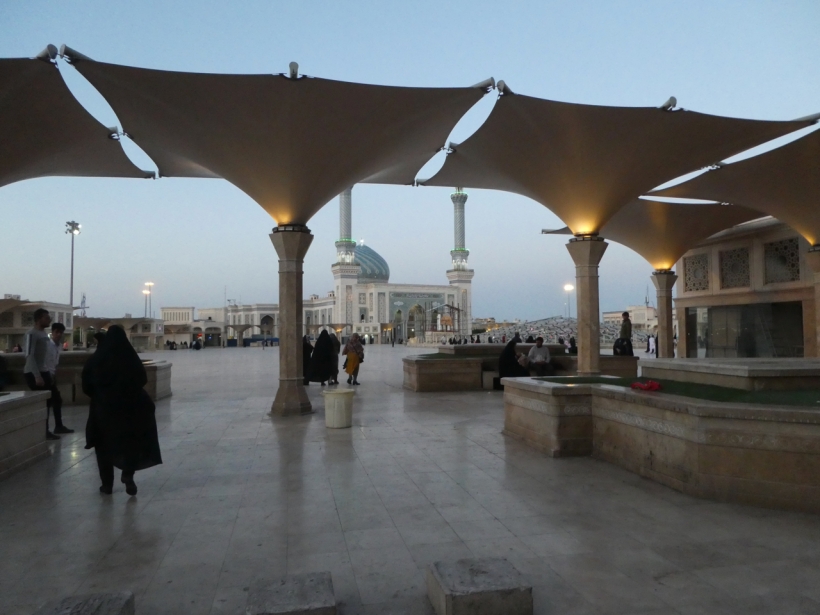 I think these men are entering the place where they study.

I enjoyed being outside by myself.

Bob took a photo of me in my new navy blue outfit.  Naderah had told me that Qom was a very conservative city and that my colorful outfits may not be as appropriate.  Qom is considered holy by Shi a Islam as it is the shrine of Fatimah Masoumah. So I purchased this in Isfahan.  Here I am.

When Bob handed the camera back to me, it dropped to ground.  I am so happy that I was carrying 2 cameras because it never worked again.

After breakfast, the whole group walked to the Fatimah Masoumeh Shrine.

Fatimah Masoumeh Shrine is considered to be one of the most sacred shrines by Shia Muslims only second to Mashhad. Fatima Masoumeh was the sister of the eighth Imam ‘Ali al-Rida and the daughter of the seventh Imam Musa al-Kadhim. In Shia Islam, women are often revered as saints if they are close relatives to one of the Twelve Imamas. Fatima Masumeh is therefore honored as a saint, and her shrine in Qom is considered one of the most significant Shi’i shrines in Iran. Every year, thousands of Shi’i Muslims travel to Qom to honor Fatima Masumeh and ask her for blessings.

Before entering the shrine or mosque, all of the women in our group were required to cover ourselves. 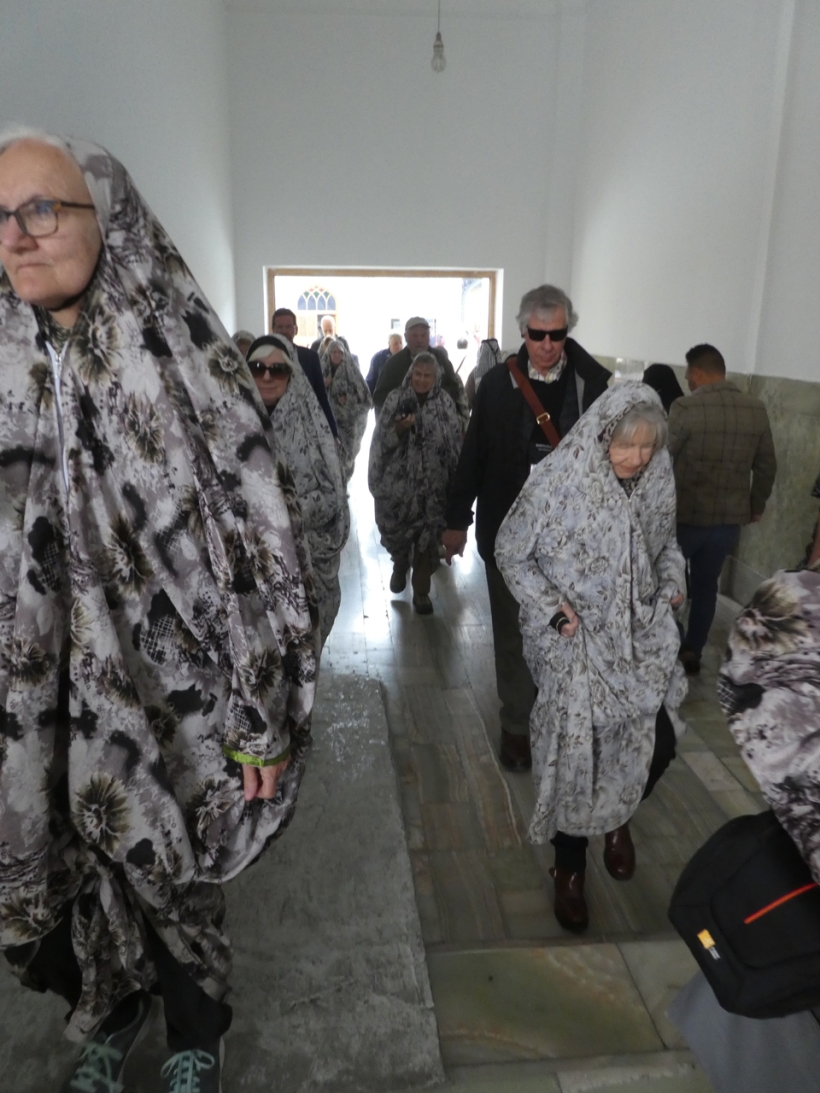 One of the mullahs gave us a private tour of the shrine, normally off limits to Western travelers.

Some of the other Iranian women wearing Chadors were very friendly and liked to take photos with us and also gave us permission to photograph them.  We had fun taking all of the photos and having those brief “Salam -Hello,” “Chetor – How are you,” and “Hoobam – I am well” conversations.  I am sure I messed up the phonetic spellings but I sure enjoyed the interchanges. 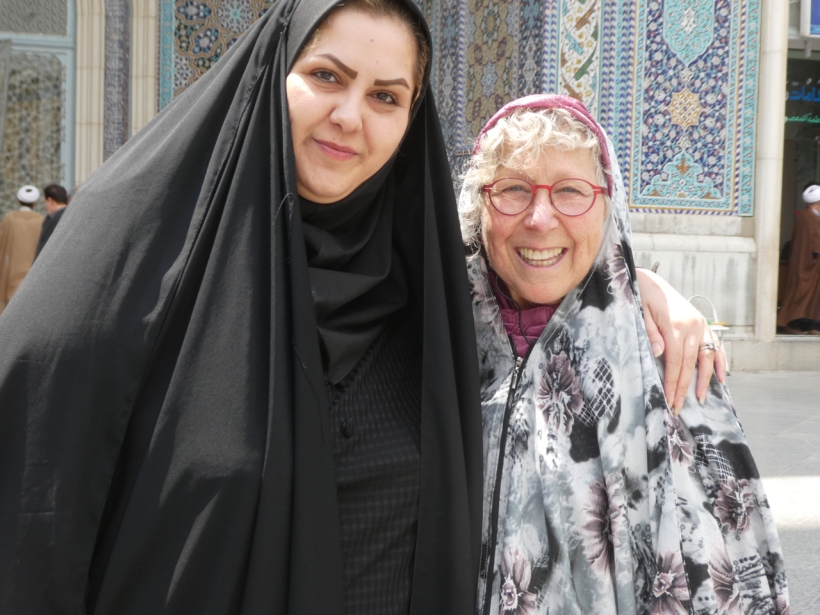 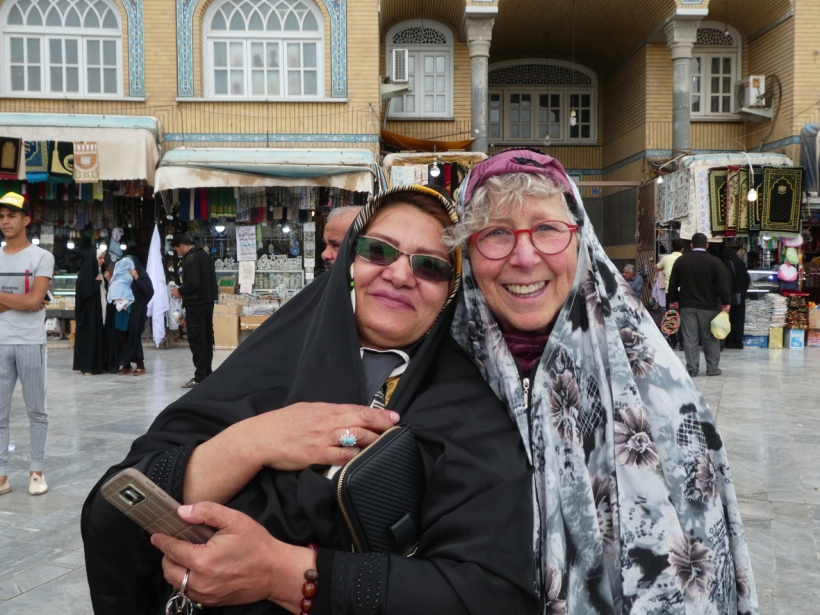 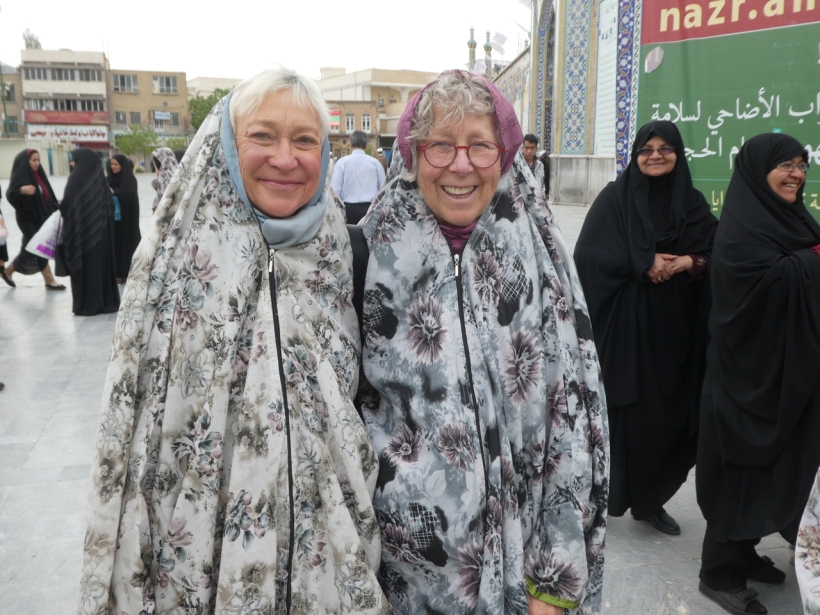 Naderah had her own so she didn’t match all of us.

Somebody told us that the women holding the blue fuzzy things would tap other women who may not be dressed appropriately with them. 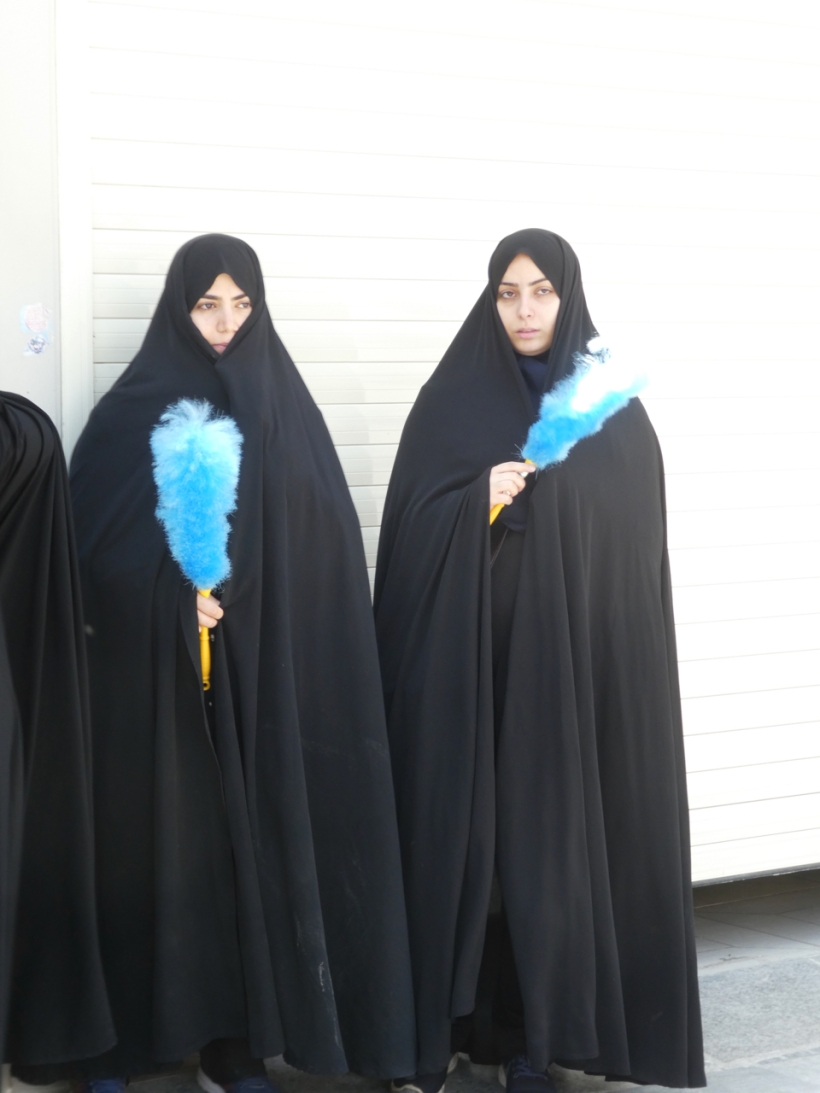 These are some of the photos I took today. 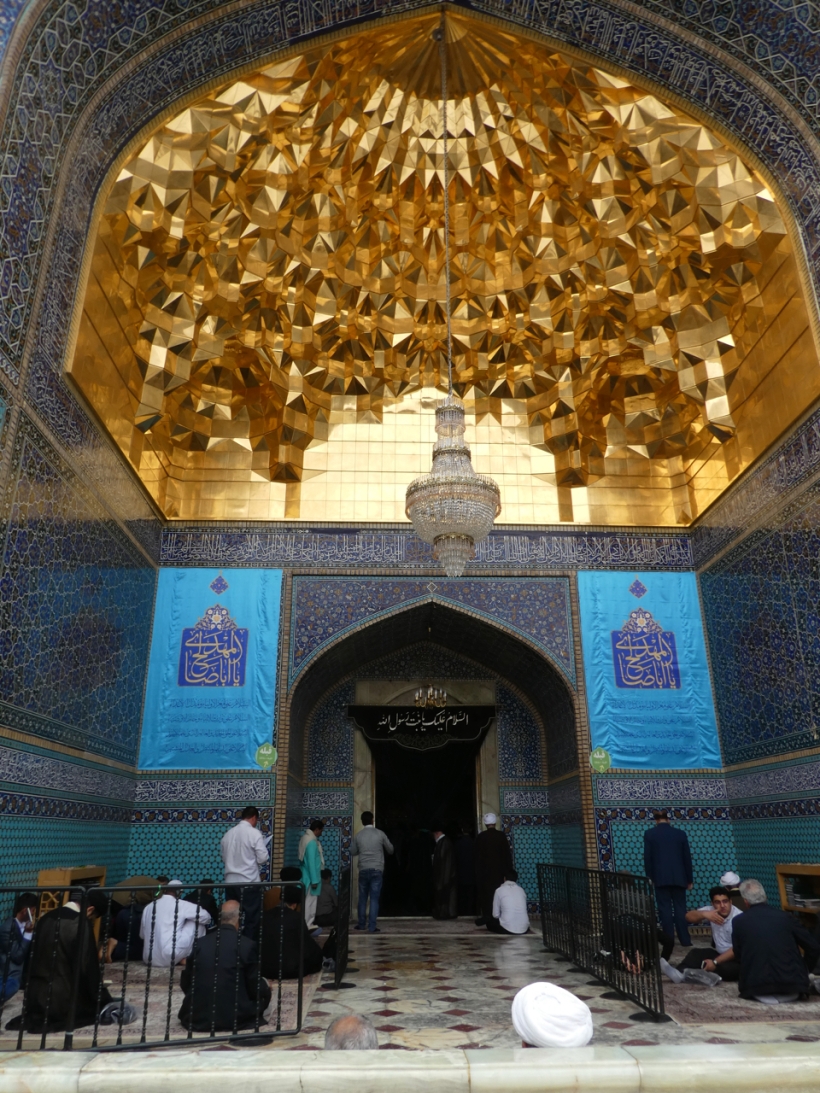 Before entering the mosque, each person had to wash (hands, face, feet).  I took more photos of them and others in the area. 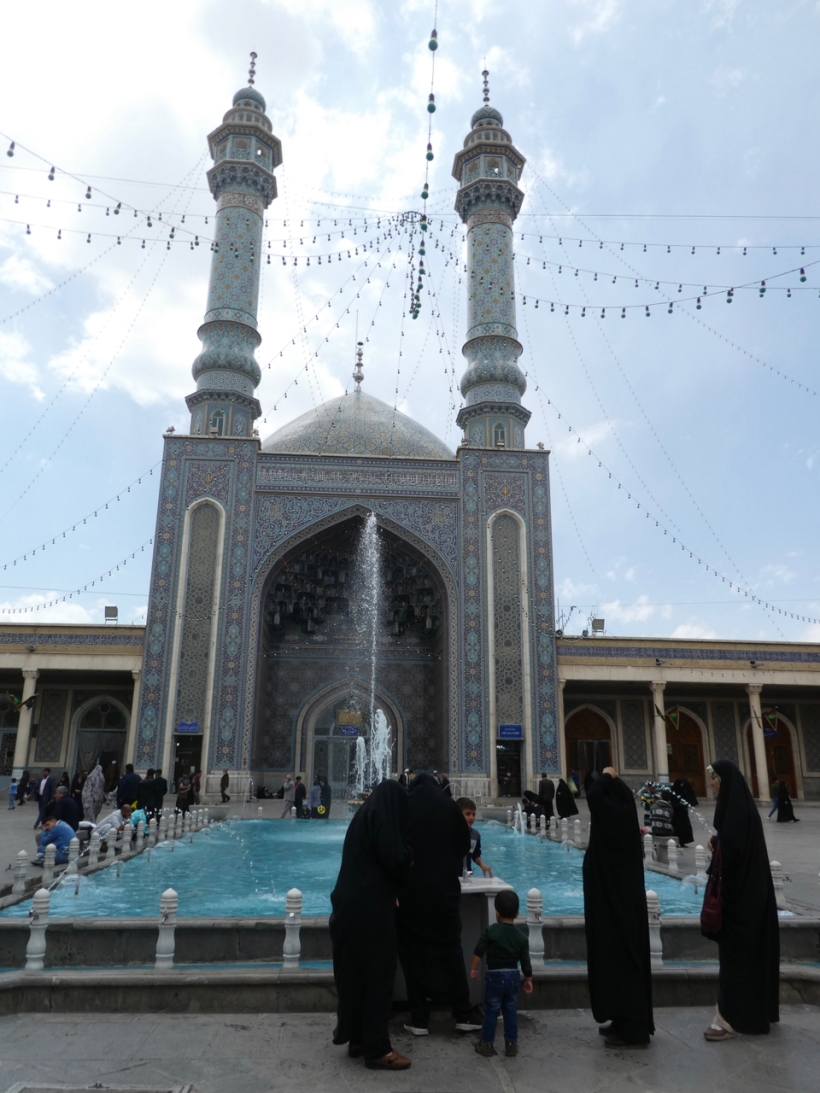 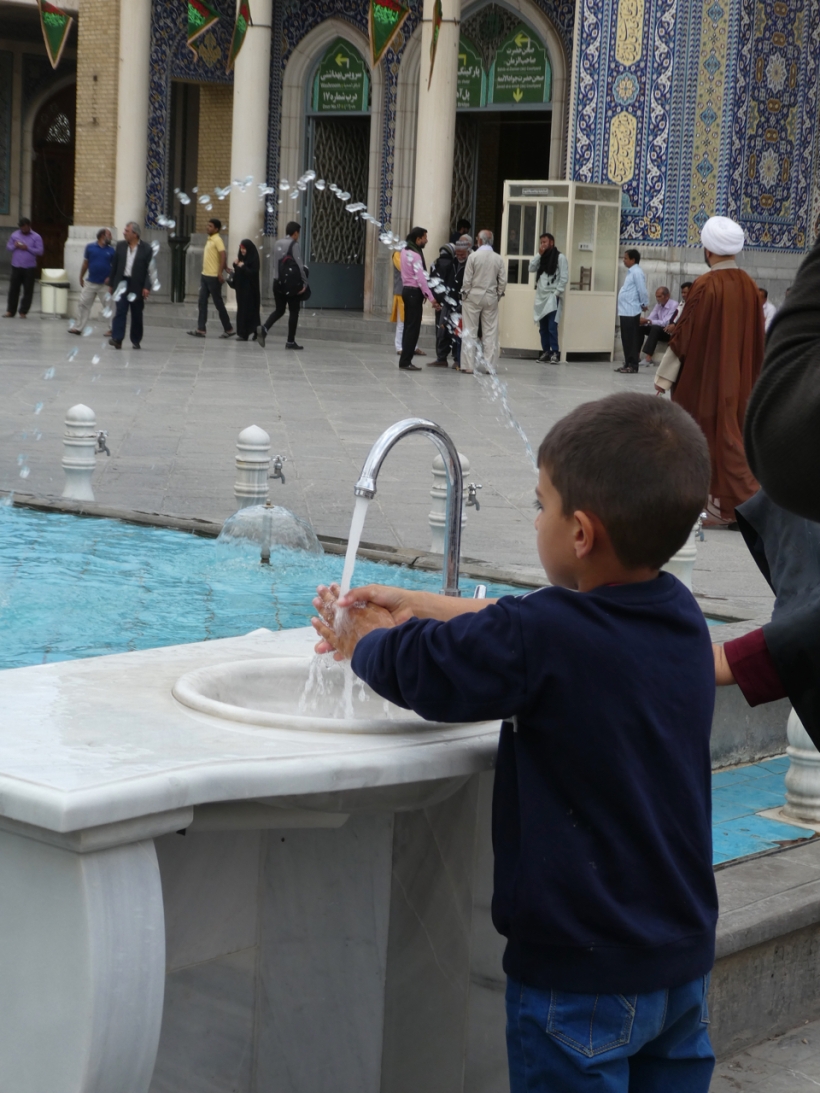 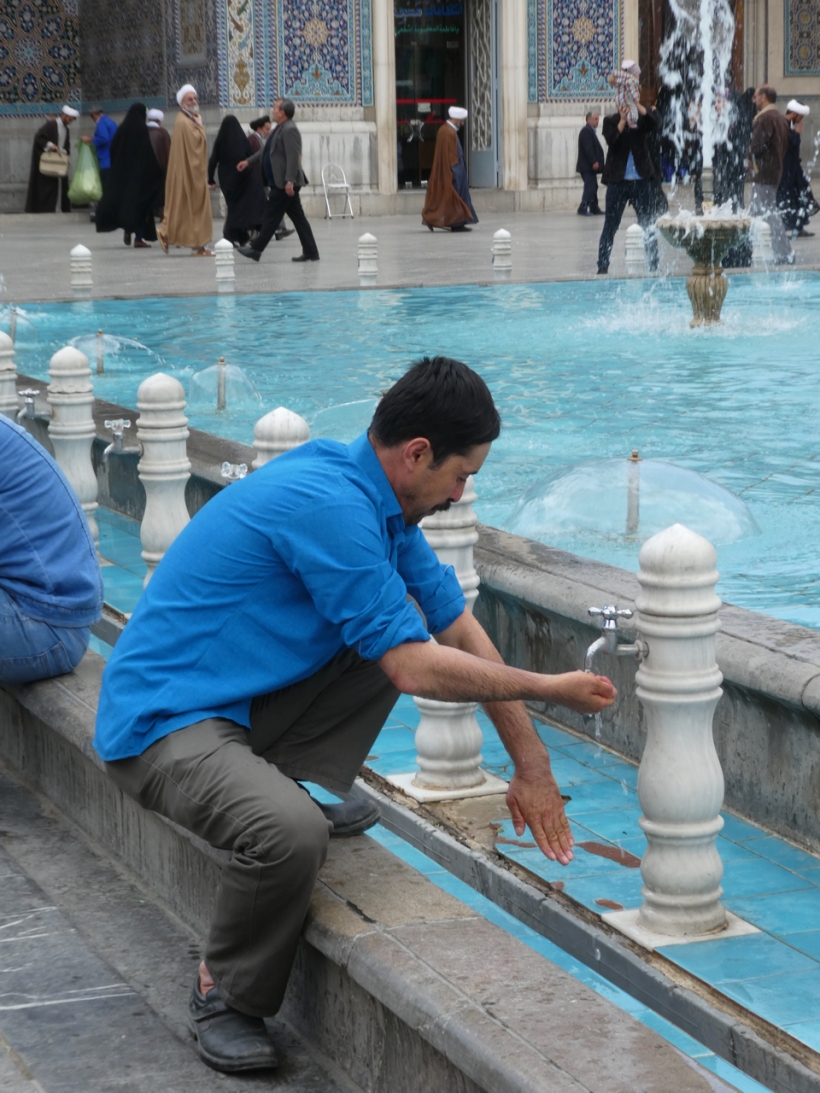 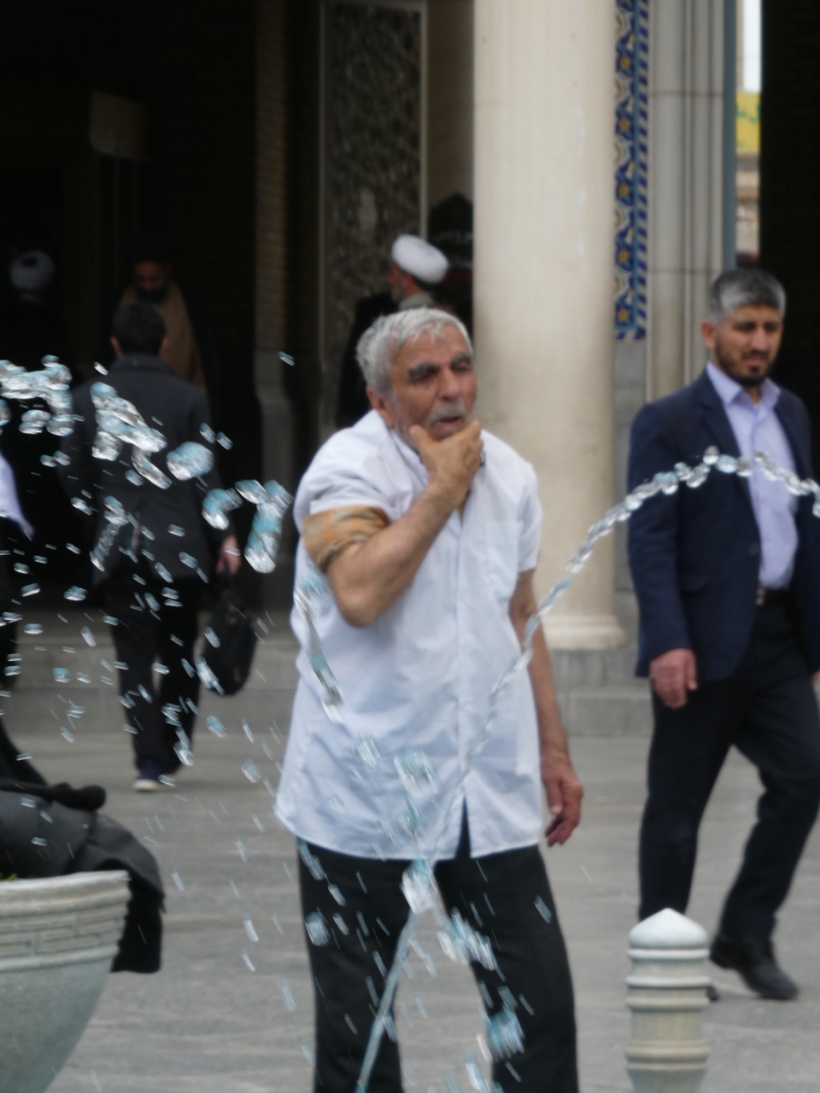 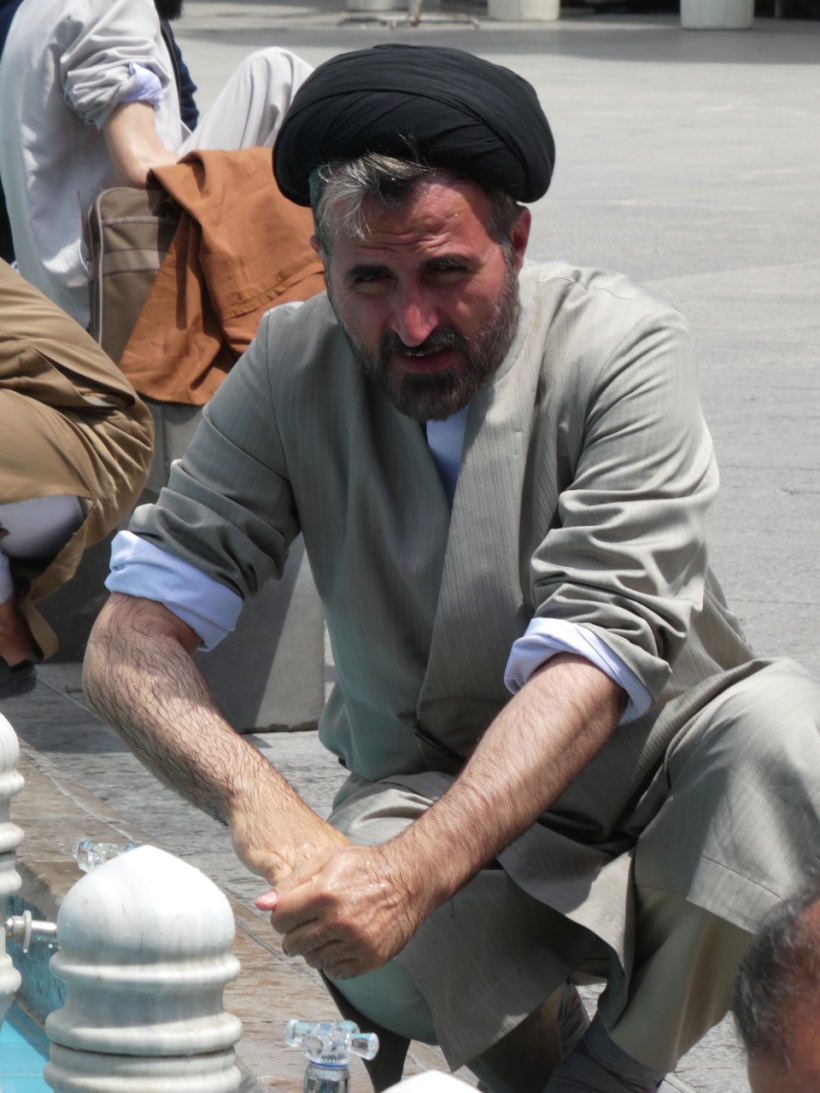 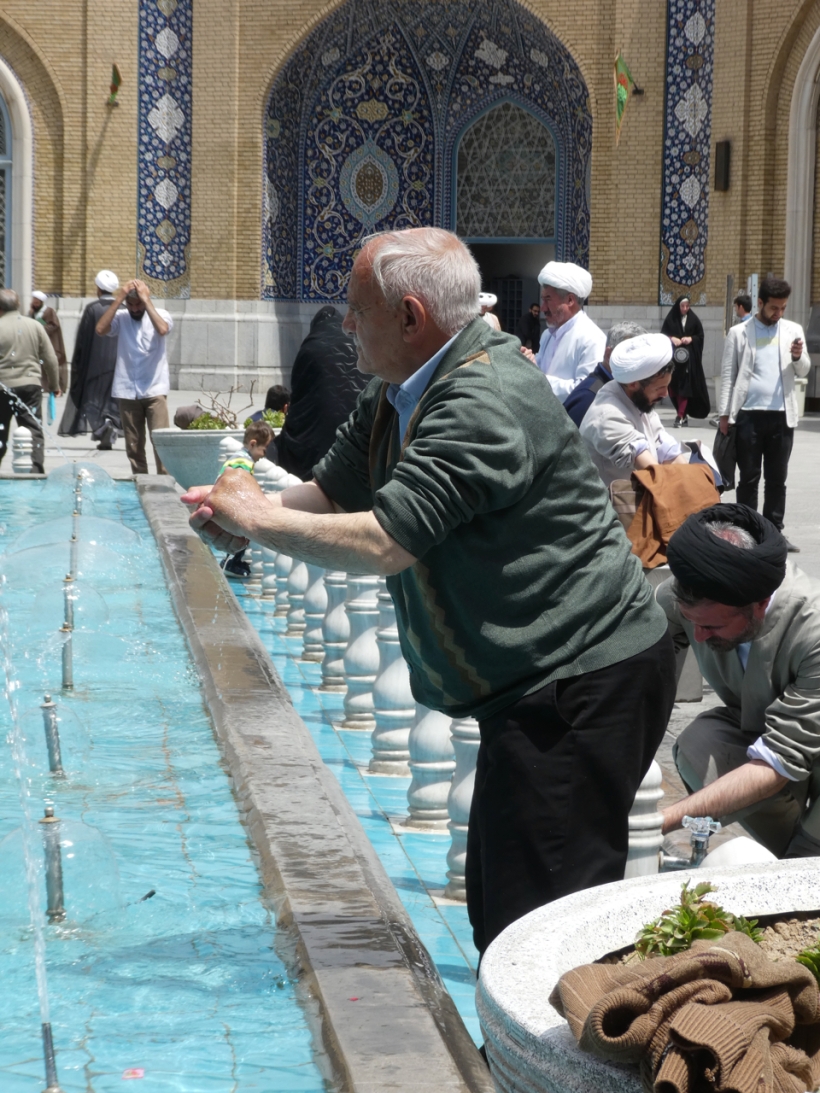 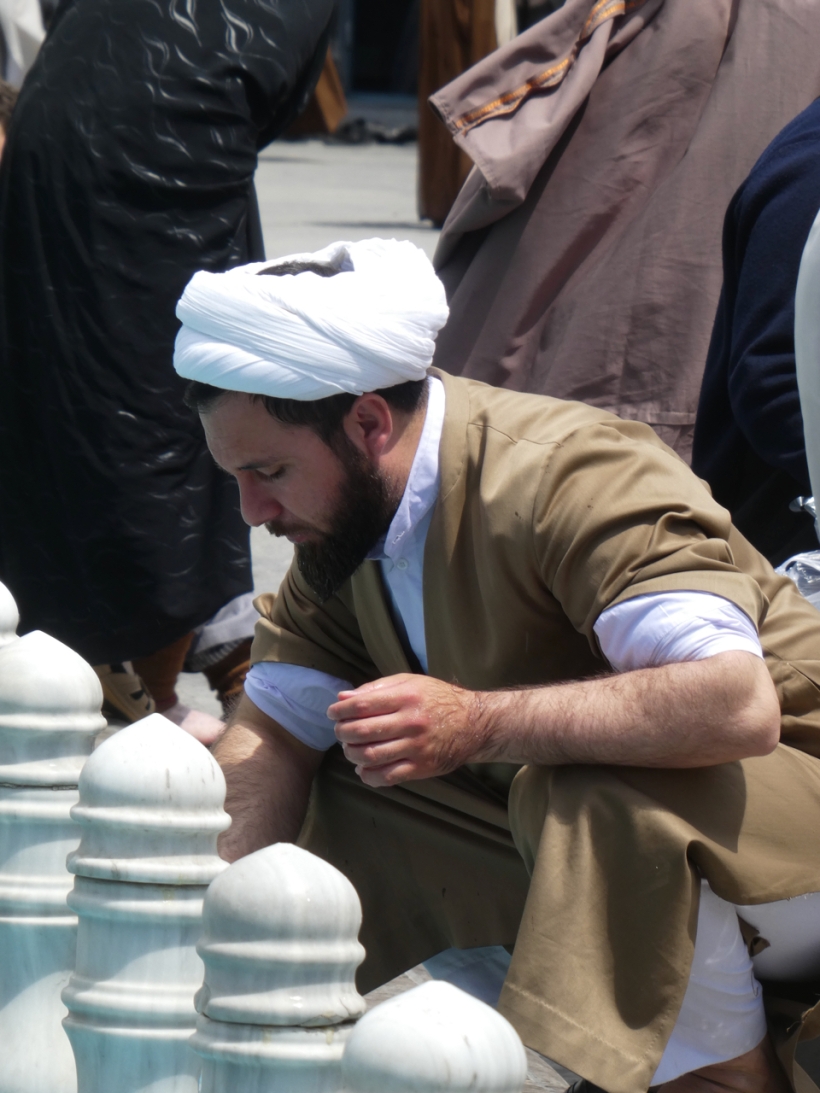 After lunch, we listened to an Islamic scholar who delivered a lecture on Islam and Shiite traditions and its significance in Iran.

He talked about basics of Islam and some of the differences between Sunni and Shia’. He said many things that I have heard attending talks at mosques in Beaverson. We had the opportunity to ask questions. It wasn’t until it was over that I realized that none of us had asked him any questions about the persecution of the Bahá’i in Iran.  We were certainly avoiding political conversations.  In retrospect, that was too bad.

One of the woman at the desk in our hotel took photos with us before we left.

I am in communication with her via Whatsapp. This is one she took with her phone and sent to me.  I am posting it although the quality is not very good. 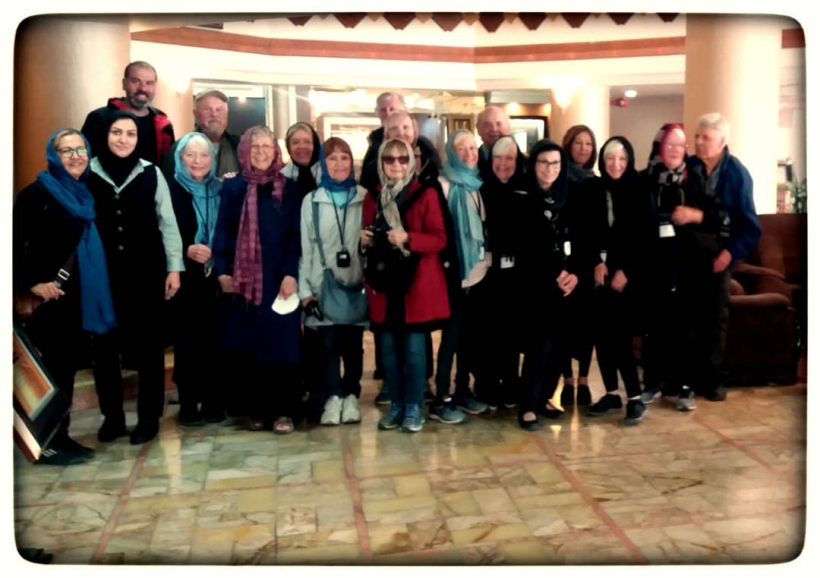 Then we drove to Tehran where we checked into the Espinas Hotel where we ate dinner.

I spent time repacking my stuff to make sure I could get “Bob’s bowl” home safely.

Then I went into the lobby to listen to a man play piano. 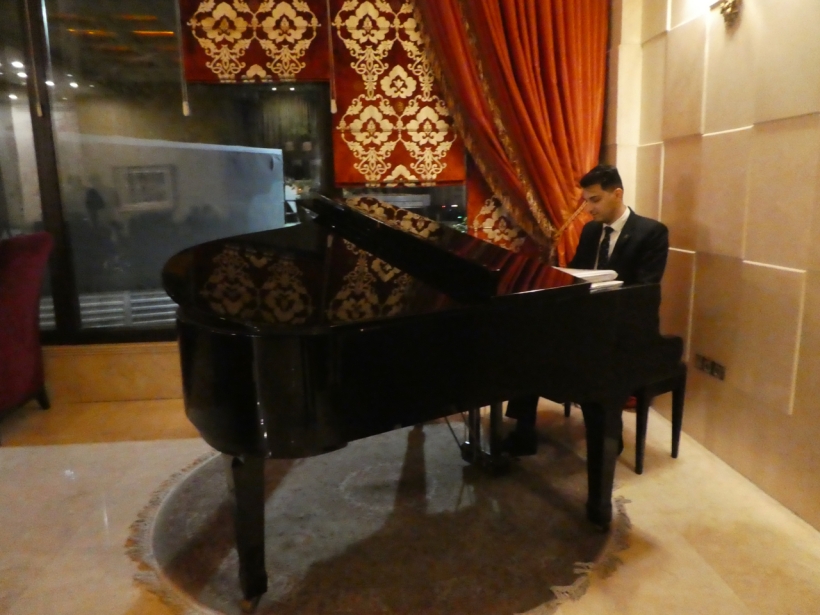 After he asked me the name of my country, he played the Star Spangled Banner for me.  I thanked him and said that the music was beautiful but I wasn’t crazy about the words.