Our first stop today was at the Jameh Mosque of Isfahan (Masjid-e Isfahan).  It is one of the oldest mosques still standing in Iran.

The origins of this mosque lie in the 8th century, but it burnt down and was rebuilt again in the 11th century and went through remodeling many times. As a result, it has rooms built in different architectural styles, so now the mosque represents a condensed history of Iranian Architecture.  It is decorated with many, many Quranic inscriptions.

Due to its immense size and its numerous entrances (all except one inaccessible now), it formed a pedestrian hub which connected a network of paths crisscrossing the city.  It was not just a place for prayer alone but actually facilitated public mobility and commercial activity.

We spent a long time at this mosque and I took many photos.

This photo from the web shows the expanse of the area.

I wish I could remember all the things that Nadereh told us about each area but that is definitely not my forte.

One room had many, many pillars and each one had a design that was slightly different.

This is a close-up of one of the designs.

The domed ceiling in another area also had many designs.

Prayer carpets were in a pile ready for people who came to pray.

This was one of the prayer rooms.

The calligraphy on the walls was amazing. 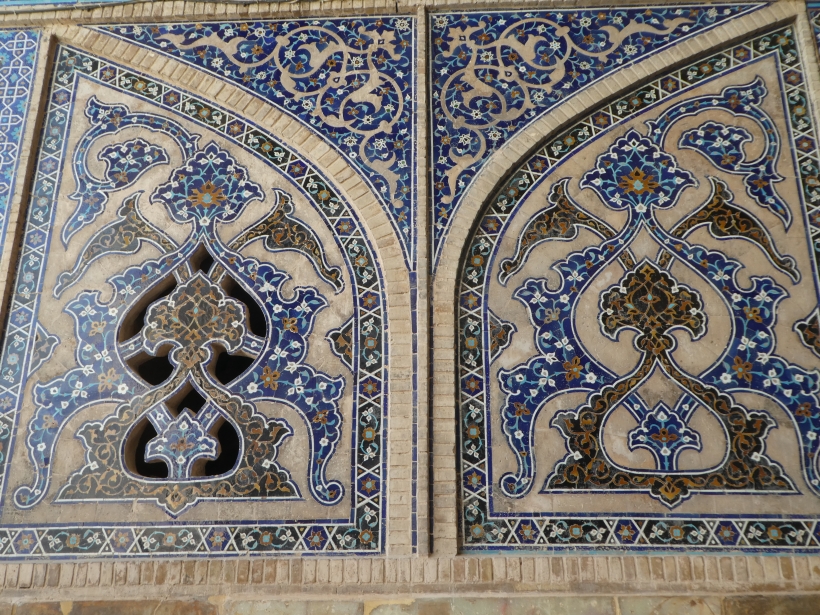 This photo of the calligraphy from the web is wonderful. 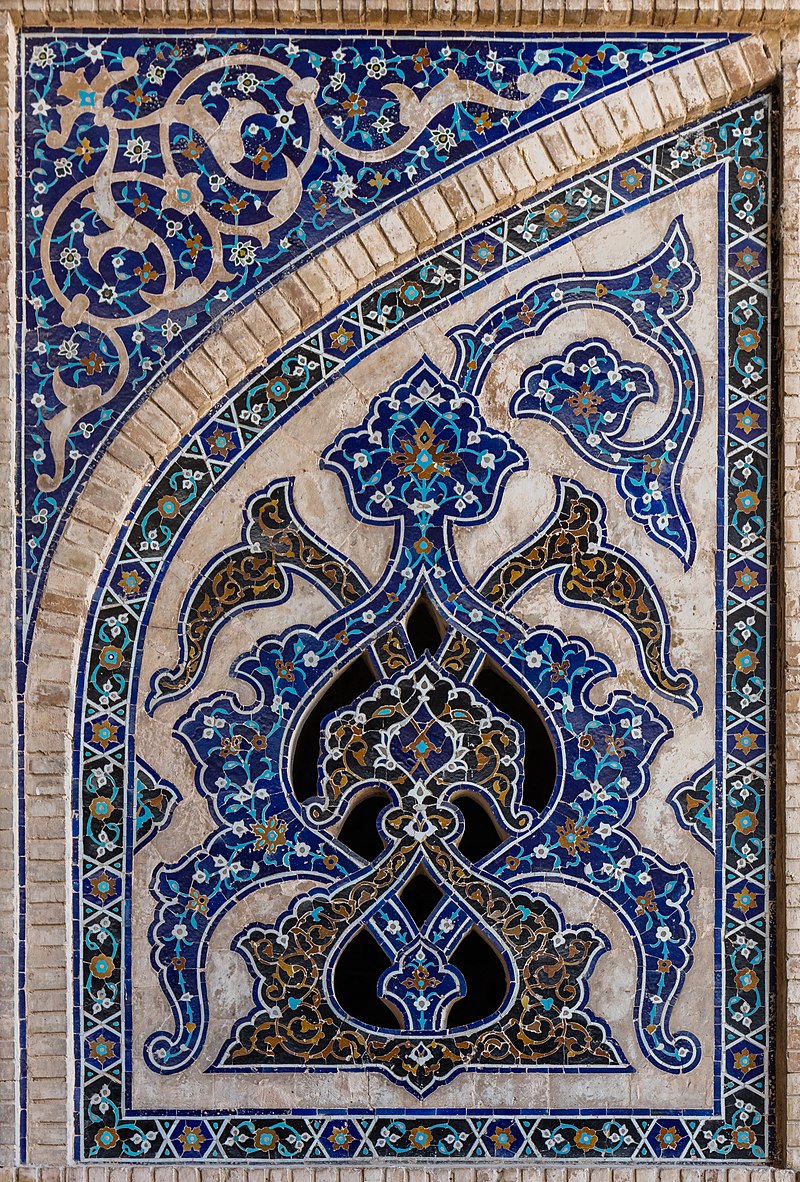 Here are some more photos from the interior. 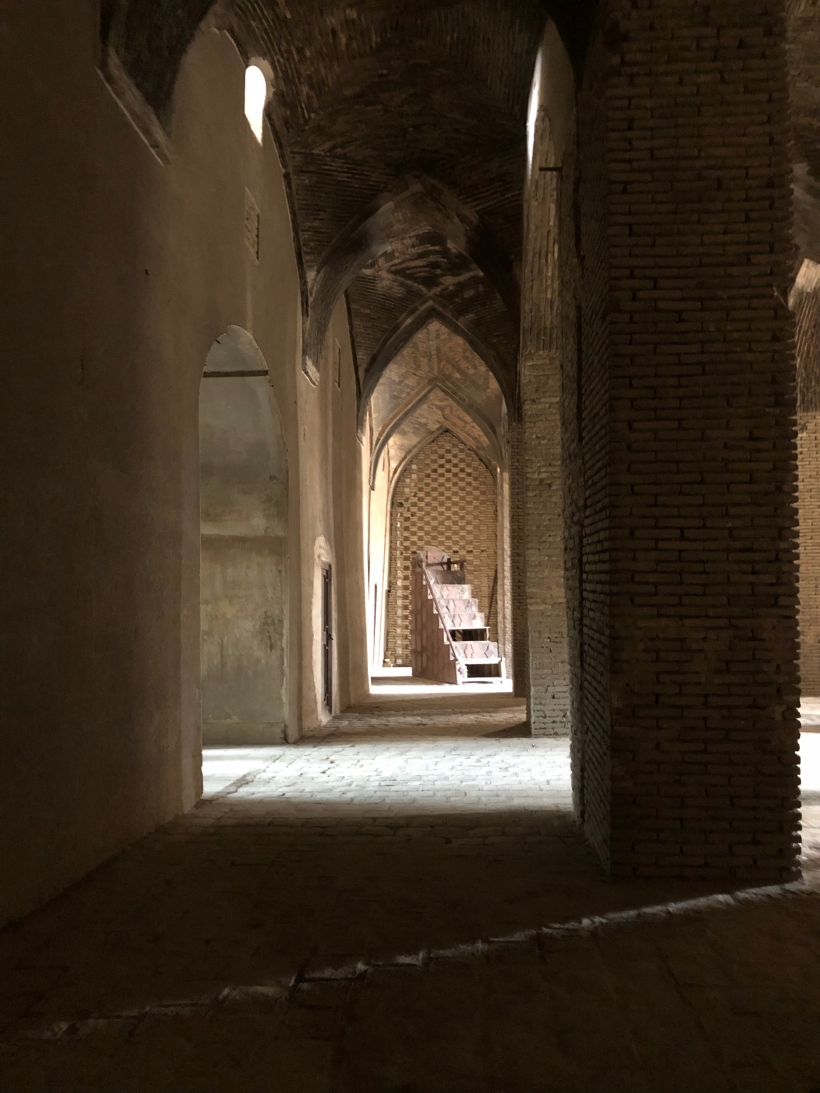 This platform on the outside is where people practice what they do when the pilgrimage to the Haj.

I am again confused about the order of today’s activities.

We visited the Armenian Quarter of the city which is called New Julfa.  It was named after the older city of Julfa (Jugha), Nakhichavan in the early 17th century and it is still one of the oldest and largest Armenian quarters in the world.  They area has an Armenian school and 16 churches including the Holy Savior Cathedral (commonly known as Vank) which is where we went. 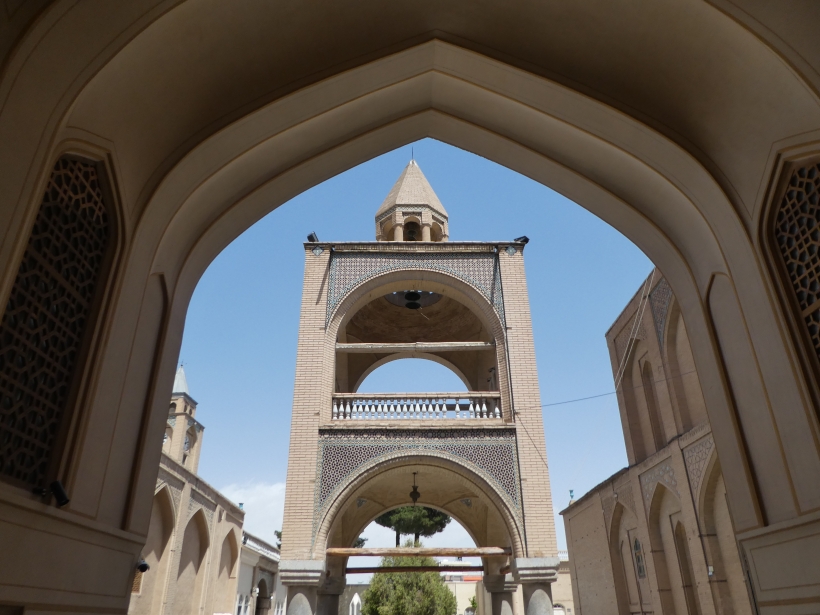 We had an Armenian guide inside the cathedral. The cathedral was established in 1606, the cathedral was dedicated to the hundreds of thousands of Armenian deportees that were resettled by Shah Abbas I during the Ottoman War of 1603-1618. He spoke about the religion and the people. Armenians have lived for millennia in the territory that forms modern-day Iran. They have been influential and active in the modernization of Iran during the 19th and 20th centuries. Armenians in New Julfa observe iranian law with regard to clothing, but retain a distinct Armenian language, identity, cuisine,and culture which is protected by the Iranian government.  I learned that the Armenians brought the printing press to Iran.  No photos were allowed but I found these on the web.

We also toured the museum next to the church.  Several of the displays of what is depicted as the geneoside of the Armenians during the Ottoman war.  The Turkish people have written another version of this atrocity.

On the way to lunch we stopped at a the workshop of Reza Abadi and watched him demonstrate how he creates Traditional Ceramics.  He is the 7th generation of his family to study these techniques and he is now training his son. 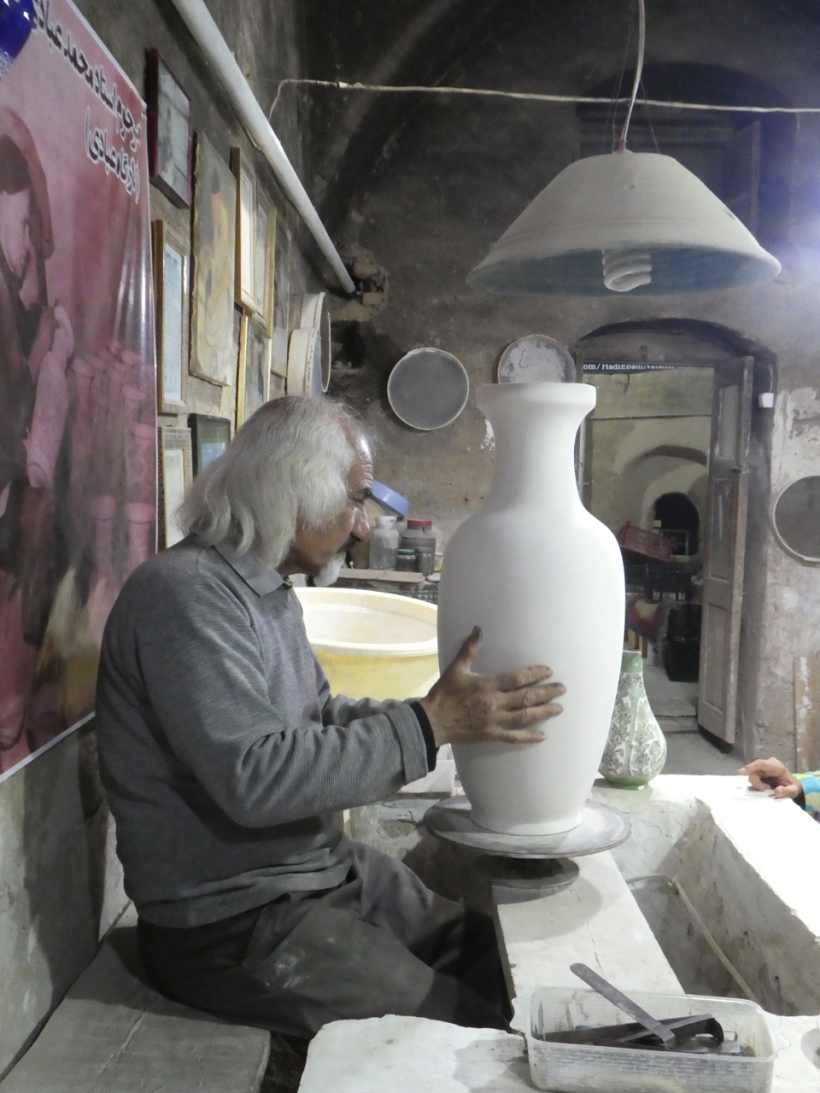 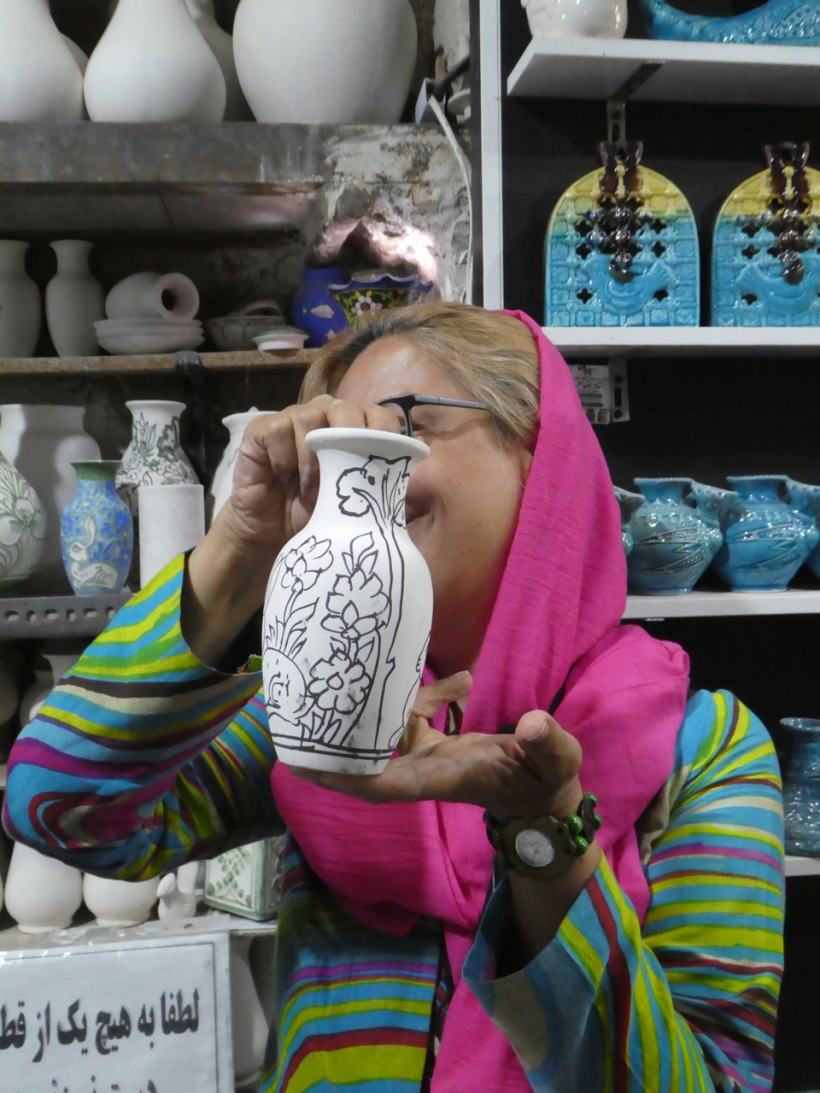 Many of us  loved his work.  Bob and Kaye were looking at a bowl that I thought was beautiful.  I looked around for another one similar to the one they were holding.  I couldn’t find one.  Several people were buying small tiles and other items.  Bob and Kaye were negotiating the price.  It was given in Euros and by the time they were deciding, the price in US dollars had increased.  I was so surprised when Kaye walked back up to the counter (as the man was wrapping up the bowl) and said that Bob had changed his mind.  They didn’t want it.  I asked her if she was sure about that and she said that Bob had decided it would be too hard to transport.  I turned to the man and said I would take it.  He wrapped it with several layers of bubble wrap.

Here is a photo of it.  One day I will get what I need to hang in on the wall in my house.

When we were eating lunch at Charsoug Restaurant next door, Bob teased me and said that I stole his bowl.  I told him that he could have it back anytime he wanted. For the rest of the trip, we called it Bob’s bowl.  The soup at the restaurant was served in  very, very hot individual pots. They helped us pour the soup into our bowls.  It was one of the most delicious bowls of soup I have ever eaten. 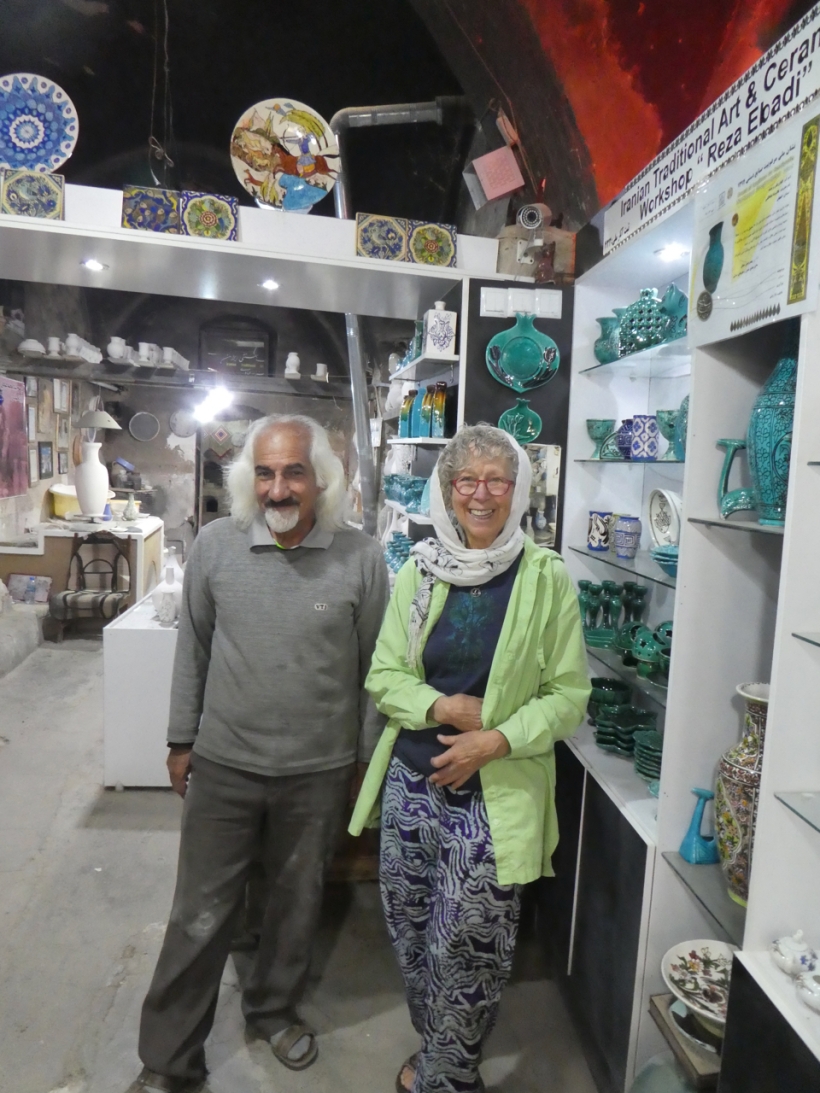 There are eleven bridges that cross the Zayandeh River in Isfahan.  Six of these are modern constructions but the other five crossings date from the Safavid period and earlier in the case of the Shahrestan Bridge. We went to the Khaju Bridge which was built around 1650  It has has 23 arches and is 133 meters long and 12 meters wide. It has been described as the city’s finest bridge.  It was a beautiful day and a Friday so many, many people were at the bridge.

There are eleven bridges that cross the Zayandeh River in Isfahan.  Six of these are modern constructions but the other five crossings date from the Safavid period and earlier in the case of the Shahrestan Bridge. We went to the Khaju Bridge which was built around 1650  It has has 23 arches and is 133 meters long and 12 meters wide. It has been described as the city’s finest bridge.

This sculpture of a lion was near the bridge.

It was a beautiful day and a Friday so many, many people were at the bridge.

As we crossed the bridge we stopped to listen to a group of men who were singing.  Others were standing around listening.

I could have spent many hours hanging out around the bridge greeting people and enjoying the beautiful weather but, of course, we had to stay with the group.

We also went to see Hasht Behesht which literally means eight pavilions in Persian.  It is a palace building that has two stories with four corner rooms around a central dome space.  The corner rooms are octagonal.  This creates 8 divisions.  These structures represent the 8 levels of paradise for Muslims. This paradigm is not confined only to Islamic antecedents.  The Chinese have the magic square for numerous purposes including crop rotation. 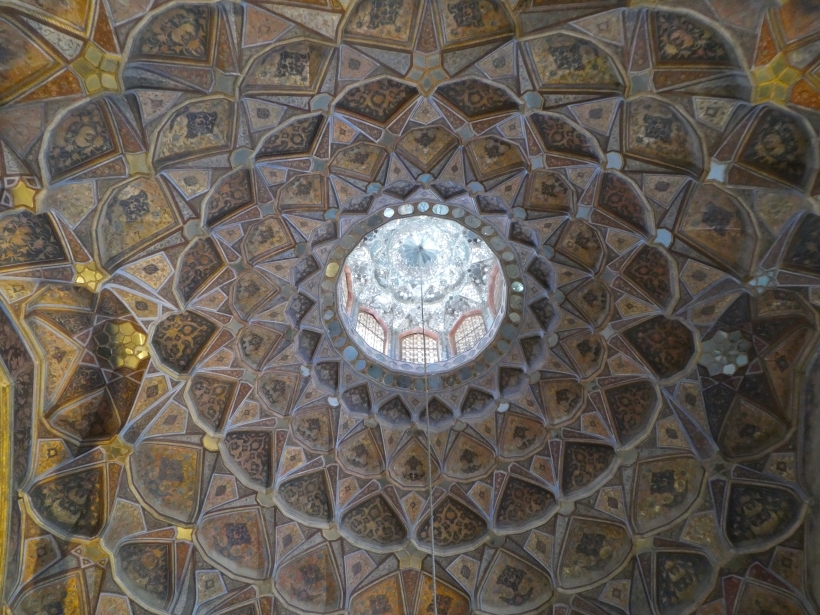 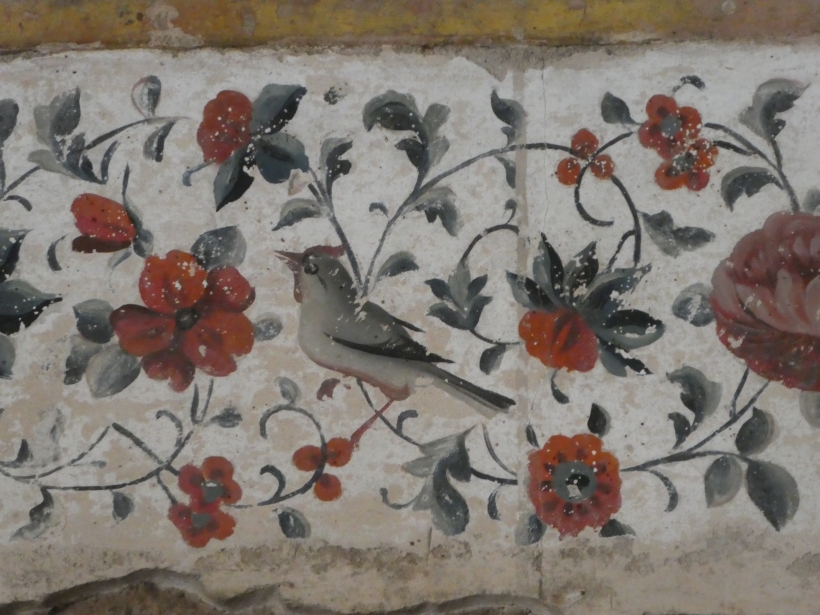 I think this is where Jane found a wonderful bag and Lance purchased a woven tissue box cover.

We had a great day.  I have no memory of where we ate dinner so I am assuming that it was in the hotel restaurant.