Our driving distance today was 440 km. which took about 6 hours.  Our first stop was at Pasargadae which was the capital of the Achaemenid Empire under Cyrus the Great. He ordered its construction beginning in 546 BC or later.  It was unfinished when he died in battle. Now it is a UNESCO World Heritage site.

The most important monument in Pasargadae is the limestone tomb of Cyrus the Great (c. 600-530 BCE).  The tomb has six broad steps leading to the sepulchre, the chamber of which measures 3.17 m long by 2.11 m wide by 2.11 m high and has a low and narrow entrance. Though there is no firm evidence identifying the tomb as that of Cyrus, Greek historians say that Alexander the Great believed it was.  He paid his respects here because Cyrus was one of his role models as an ideal ruler. When Alexander looted and destroyed Persepolis, he paid a visit to the tomb of Cyrus. Arrian writing in the second century AD, recorded that Alexander commanded Aristobulus, one of his warriors, to enter the monument. Inside he found a golden bed, a table set with drinking vessels, a gold coffin, some ornaments studded with precious stones and an inscription on the tomb. No trace of any such inscription survives, and there is considerable disagreement to the exact wording of the text. There are reports that it read,

“Passer-by, I am Cyrus, who gave the Persians an empire, and was king of Asia. Grudge me not therefore this monument.”

Another variation, as documented in “Persia: The Immortal Kingdom, is,

“O man, whoever thou art, from wheresoever thou cometh, for I know you shall come, I am Cyrus, who founded the empire of the Persians.
Grudge me not, therefore, this little earth that covers my body.” 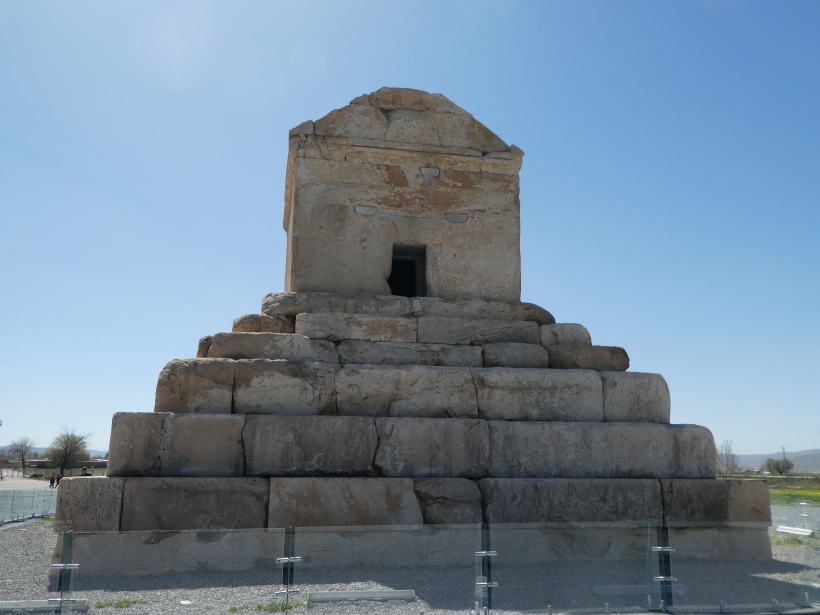 These are words of Cyrus written in Persian, Elamite and Akkadian.  I used a photo from the web. 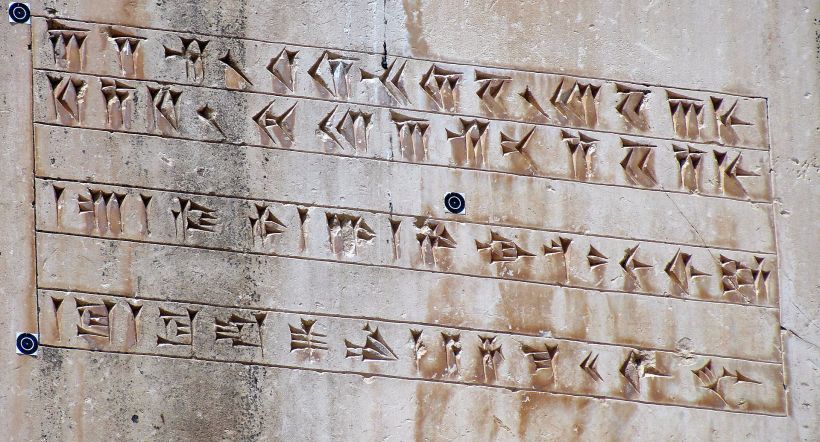 There were open sided vehicles which took us around the area.

In addition to the Tomb of Cyrus, the archaeological remains of its palaces and garden layout are an outstanding example of the first phase of the evolution of royal Achaemenid art and architecture  and an exceptional testimony to the Achaemenid civilization in Persia.  We had to really use our imagination to visualize what the actual structures looked like from what was left.  Here are some of my photos of the area. 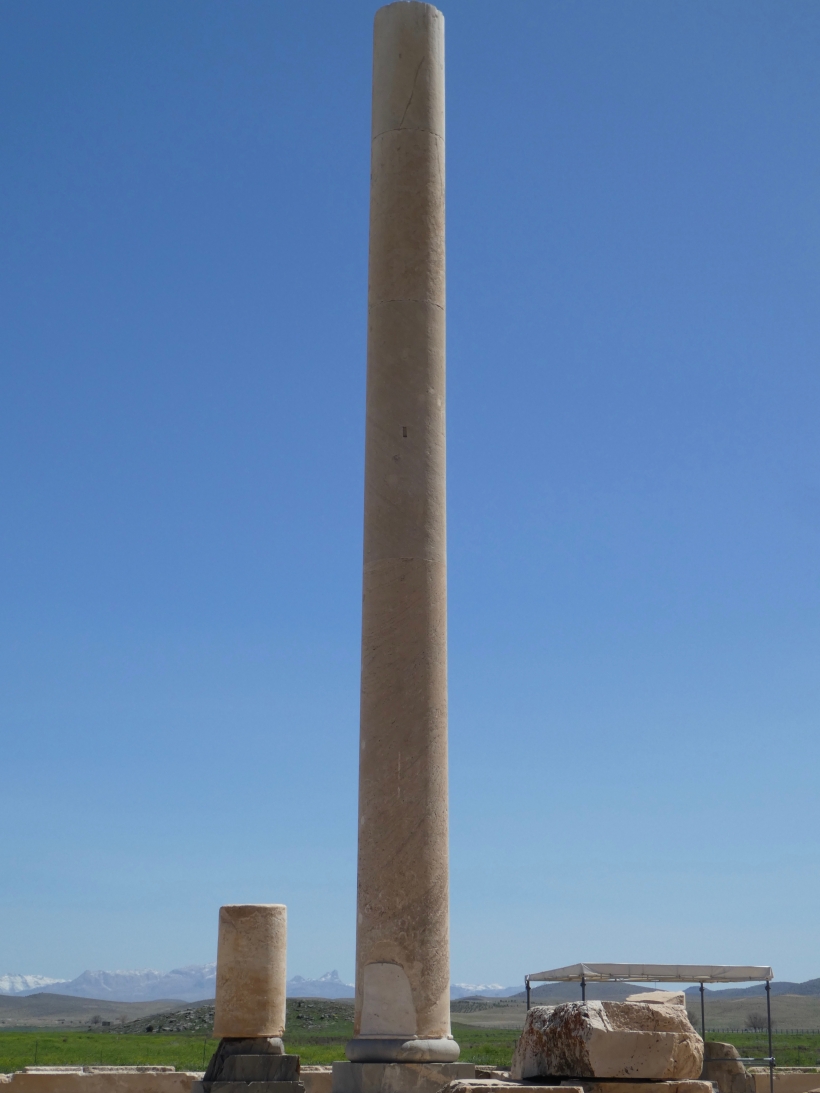 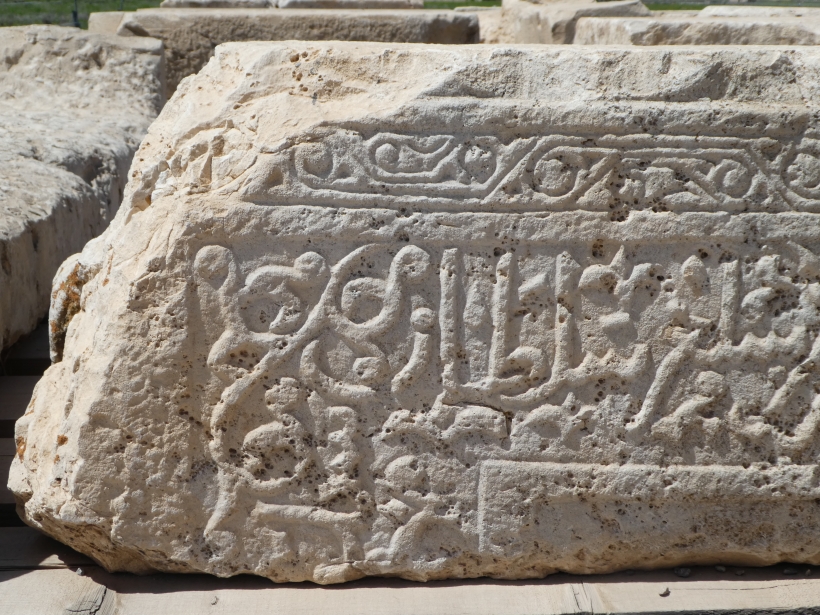 I loved being able to view the mountains behind Pasargadae.  I was wishing that our trip included hiking in those mountains.

The restaurant where we had lunch was named Hoobareh.  We were served an absolutely delicious chicken dish covered in a sauce made with sour plums.  Yum. 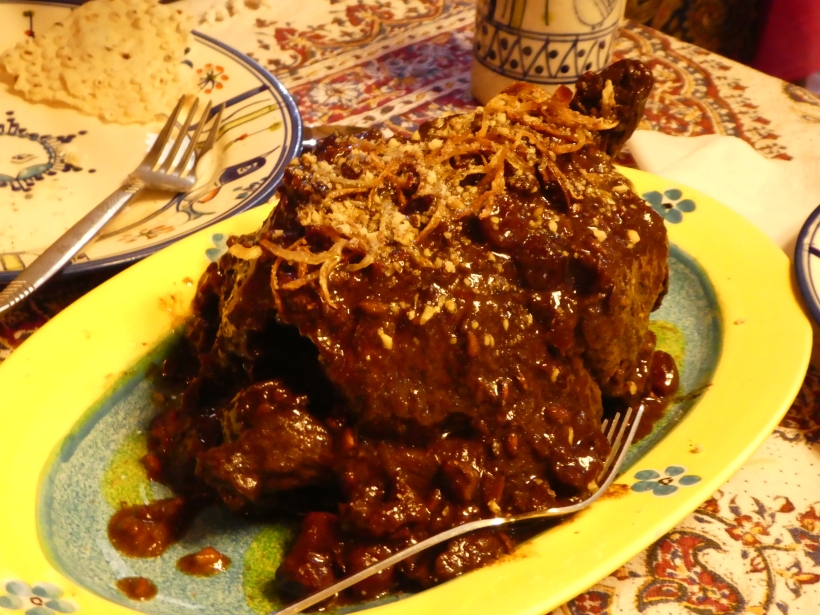 After lunch we drove on to see the Zoroastrian Sarv (also called the Cypress of Abarkuh.  It is protected by the Cultural Heritage Organization of Iran.  It is 25 meters high and 18 meters in circumference and is estimated to be over 4 millennia old.  That means it is likely the 2nd oldest living thing in Asia.

This is my new friend, Sally, in front of the tree. 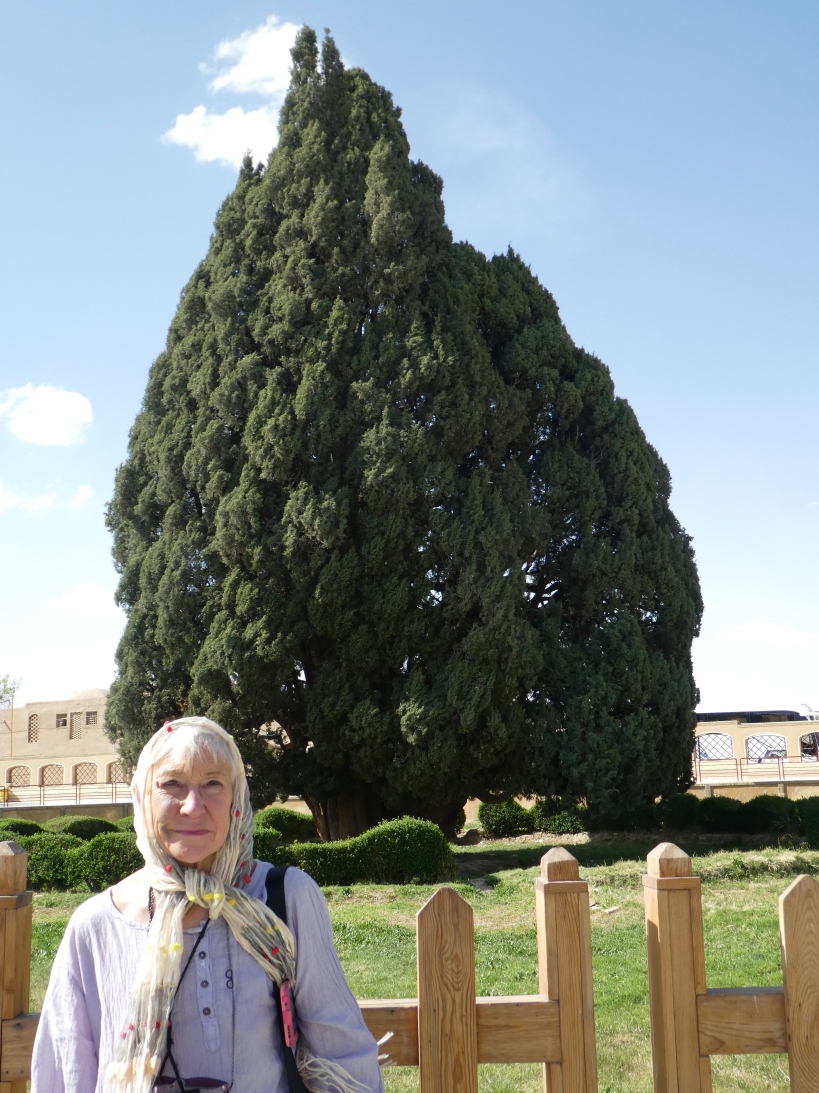 After viewing the tree we walked over to a little shop where they served ice-cream.  Of course I had to have some chocolate and berry ice-cream.  In this photo I am wearing a cap instead of a scarf.  I had asked Nadereh if that was acceptable since my head was covered and she said, Yes, except when we go to Qom (a very religious community).  I wore it all day.  By the end of the day, I decided that it may have been acceptable but it just wasn’t appropriate for me.  All of the other women were wearing scarves and that just felt like the right thing to do.

After lunch we had another treat.  The man who owned the shop told us a story.  He was so very animated and it was quite the performance.  What a treat. 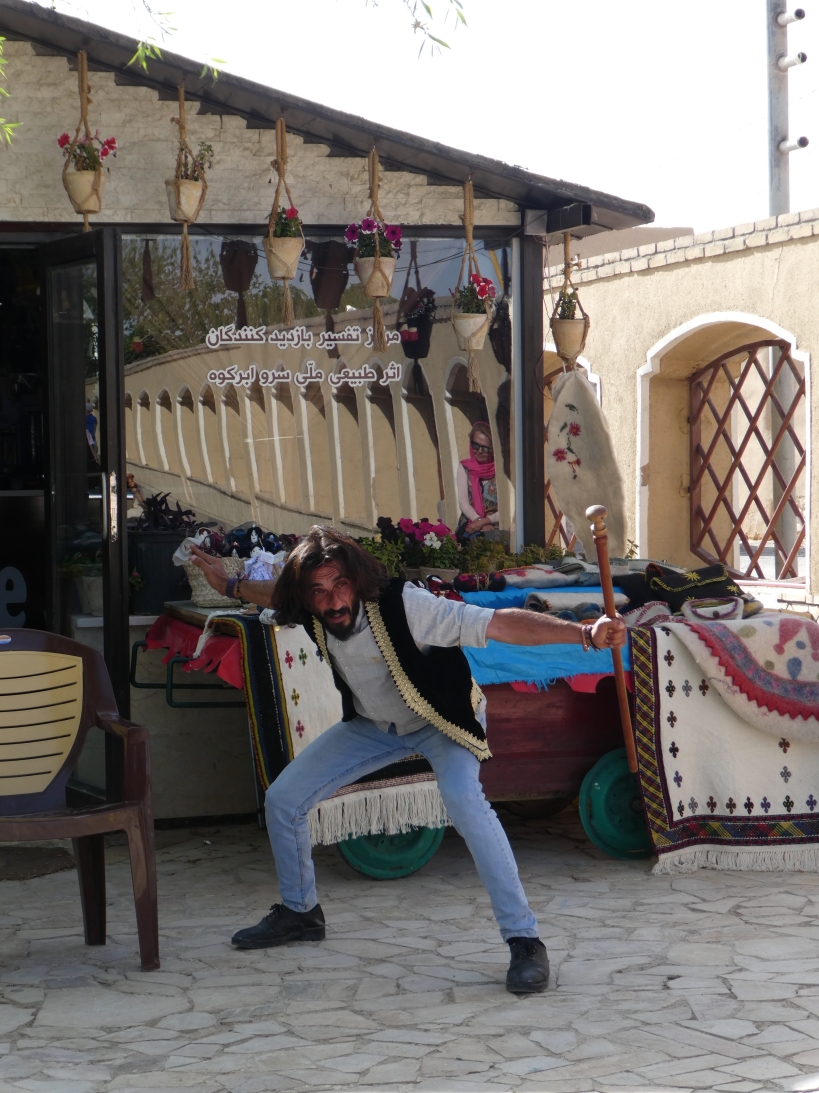 As we were leaving, we passed a man who was cutting the grass by hand.

We drove to the town of Taft which is near Yazd.  Nadereh said that she had arranged for a special treat for us.  We were taken to the home of a Zoroastrian couple. We walked through narrow streets to get to their home. 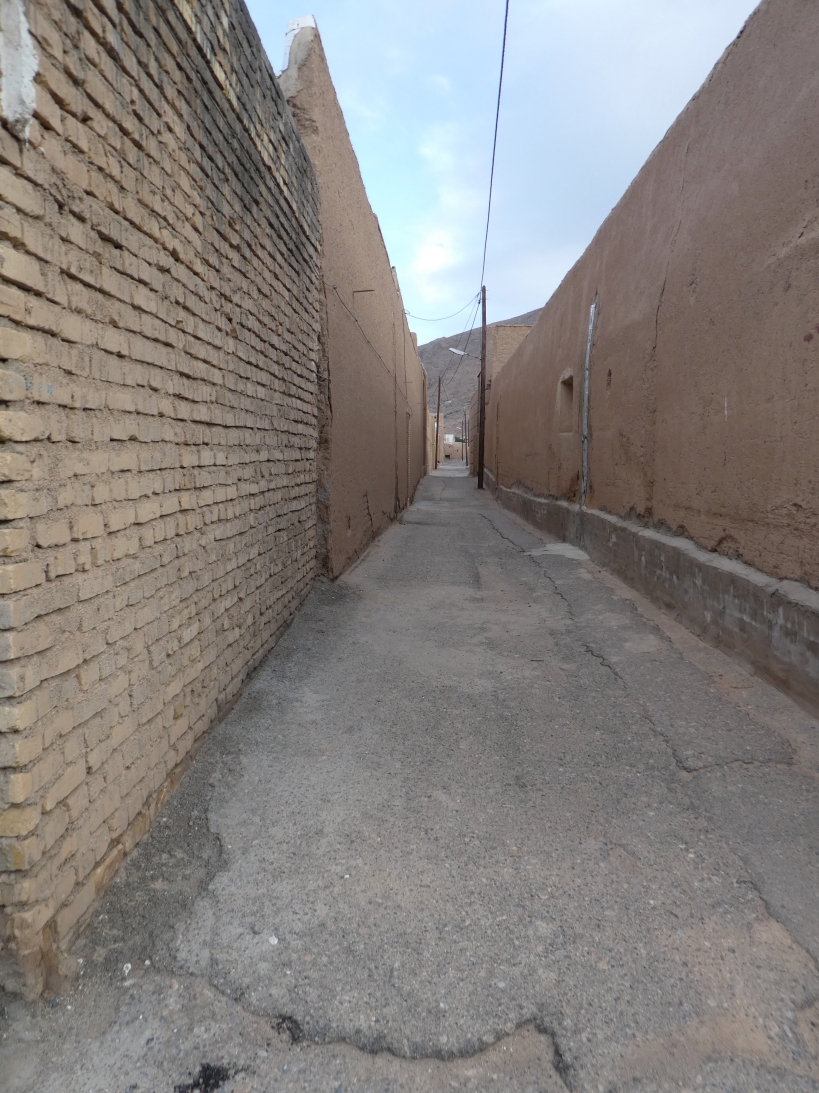 … and I started taking photos of doors. 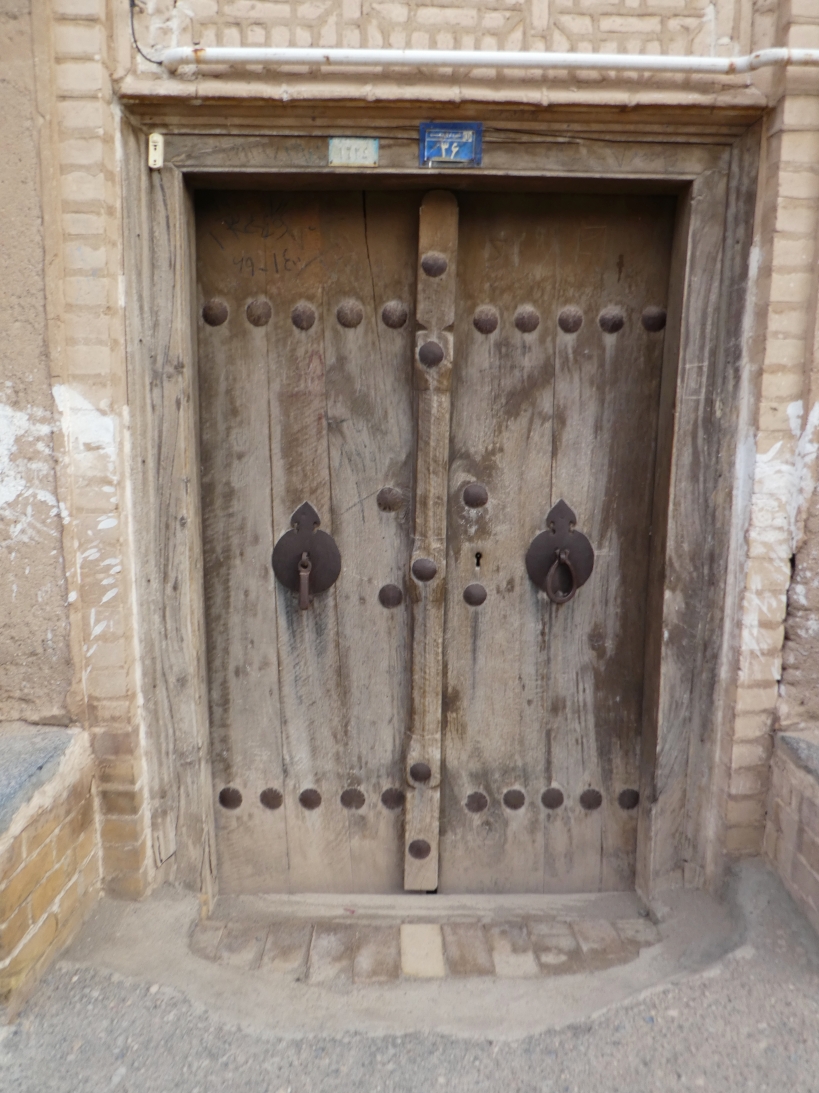 We were greeted at the front door by one of the owners.

We sat around in an entry room were served tea and a snack.  I started taking photos of many things in their home.  This is a wall of things that people who stayed there have sent to them. 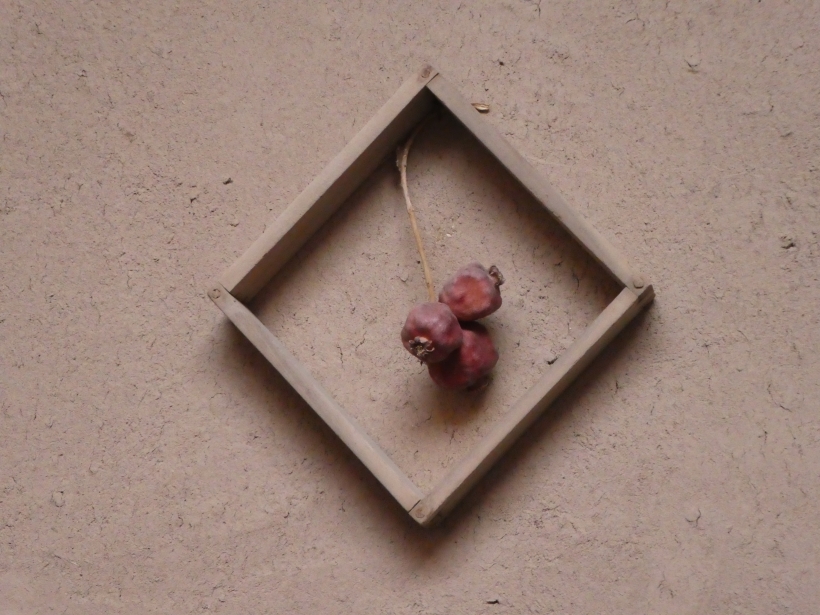 This is like a sun roof but the cover had blown off in the wind just before we arrived.  It took 6 men to bring it back up to the roof. 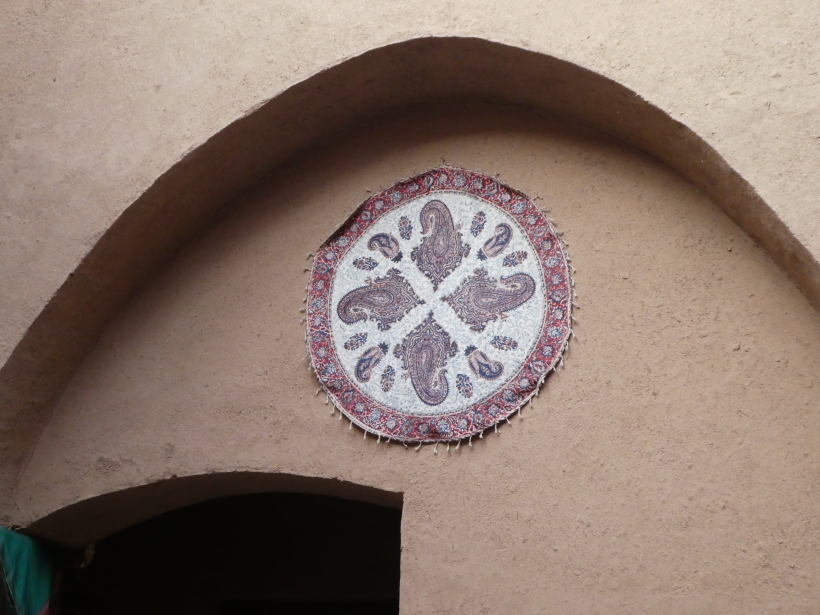 I loved this area with the jugs and cups. 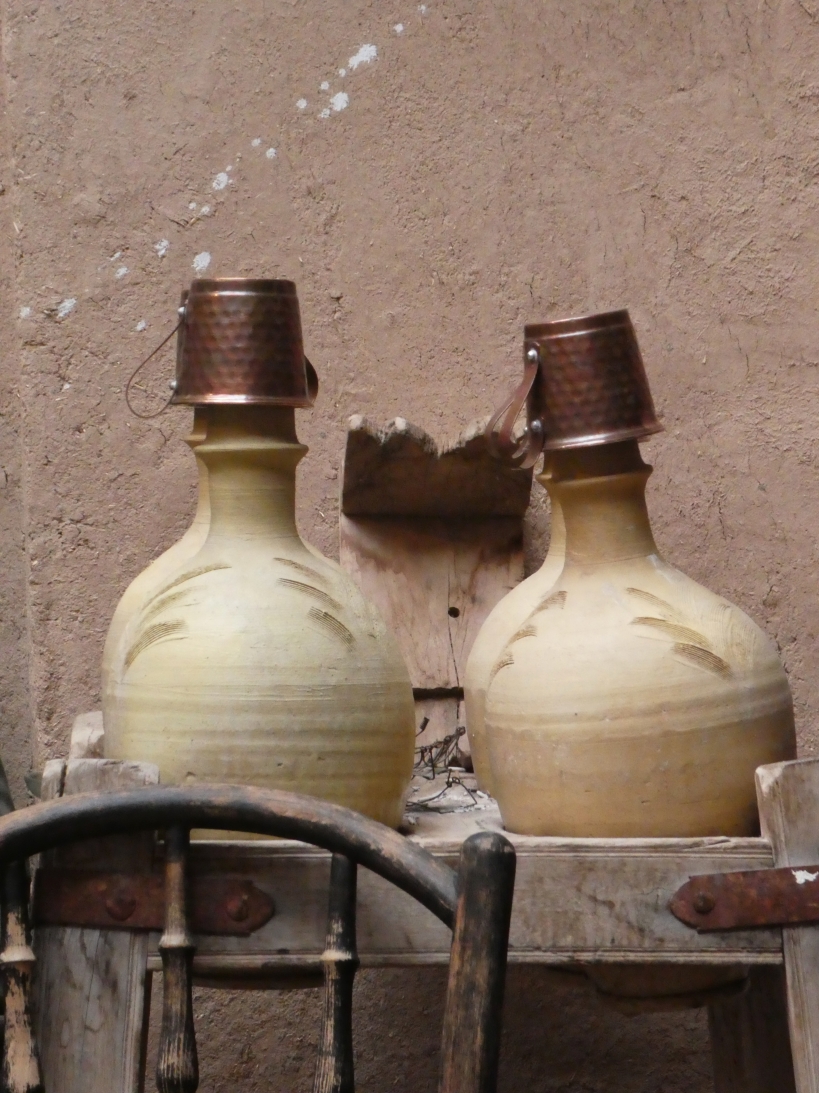 We sat outside near the pomegranate grove and the owner talked to us about their home.  They are the 4th generation of owning this house.  He and his wife had returned to his family home after many years.  He had to talk his father-in-law into believing that they could make it work in Taft where many people had left and abandoned their homes.  I believe he said that there are presently 7 Zoroastrian families living in Taft.

He taught us the principals about Zoroastrianism.  Good Thoughts, Good Words, and Good Acts are the basis of their lives.  The internet says that Yazd means God.  He said that Yazd means praying.

During his talk he told us a story about when the Zoroastrians were trying to get into India. This is what I remember.  One of the leaders was told that it was full.  He was given a cup of milk that was filled to the brim and told that if he could add to the cup without spilling any, they would allow more people.  He added sugar to the cup.  More people were allowed.  1/7 of Indian people are Zoroastrians.  This story sure made me think about the current policies about immigrants in the U.S.  Our immigrants add to our lives in a positive way.

What a pleasant place to rest. 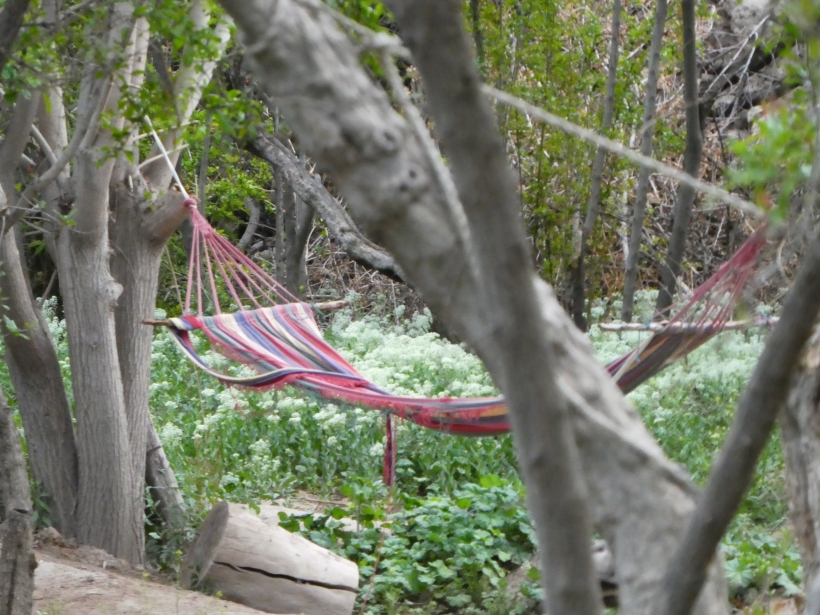 They were setting up for dinner. 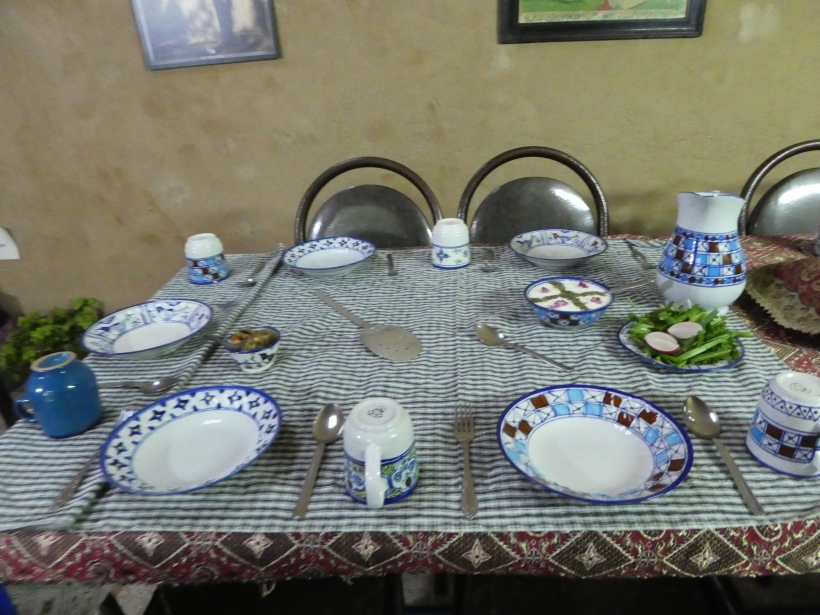 A sleeping area.  It would be so nice to stay here. 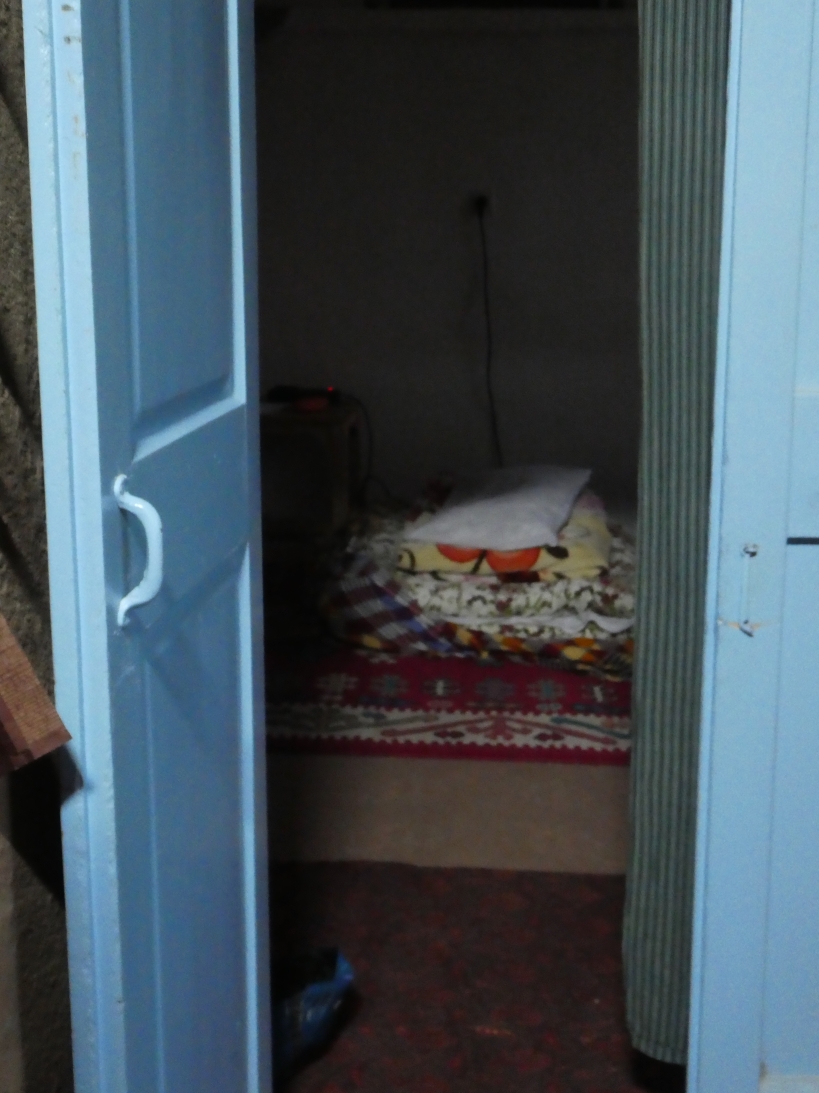 Vents in the rooftop. 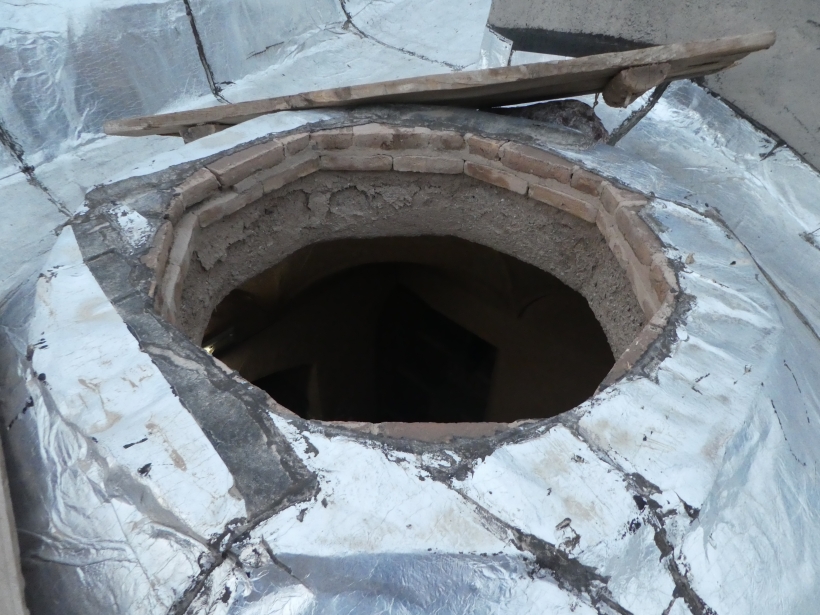 A view from the roof.

Dinner was being served

I was clearly in my “Happy Place,” and at dinner I said, “I am 5 years old right now.”  That is one of the ways I express when I am feeling pure joy.  This was absolutely one of the highlights of my trip.  People are the most important part of my travels.

After dinner we drove to Yazd where we checked into the Moshir Garden Hotel.

The Garden of Moshir Al-Mamalek is the first Persian Garden hotel with a completely traditional architecture and equipment, yet equipped with all amenities at the site of the old Moshir al-Mamalek. There were gardens, flood water jets, pools and fountains all around. The hotel’s rooms on the side of the garden  have desert architecture.  I was sure glad we were going to stay here for 2 nights.

Obviously this has been my favorite day so far.