Our drive this morning was about 70 km.

I had never seen termite towers that were this tall before.

We reached the Ormorate Immigration Post where we had to show our passports. 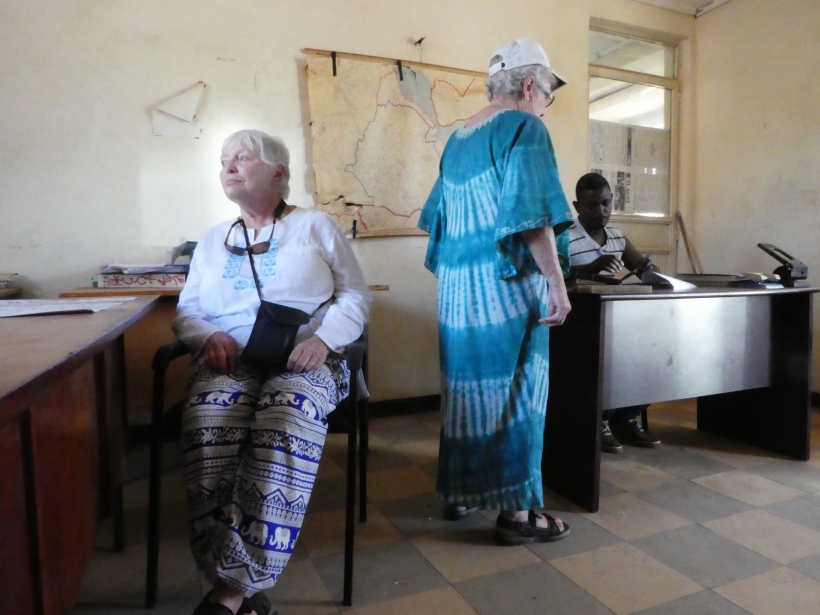 I was finally able to get a picture of the monkeys in the tree near the river but they move so quickly so the photos are not very clear.

The narrow wooden dugout boats that made out of fig trees were waiting for us to board.

Walking down the dirt path by the river was not the easiest task.

We all sat on the floor of the boat. The men paddled the boats across the Omo River (also called Omo-Bottego). It is the largest Ethiopian river outside the Nile Basin that is entirely contained within the boundaries of Ethiopia and it empties into Lake Turkana on the border with Kenya.  They maneuvered the boat with just a stick and were not pushing off of the bottom. If they had had paddles, it would have been much easier.

The Dassanech People live on the other side of the river. As we approached the shore, we saw cows that had come down to the river to get a drink. Two of them slipped and fell into the water.

Some boys were waiting for us when we reached the other side of the river. 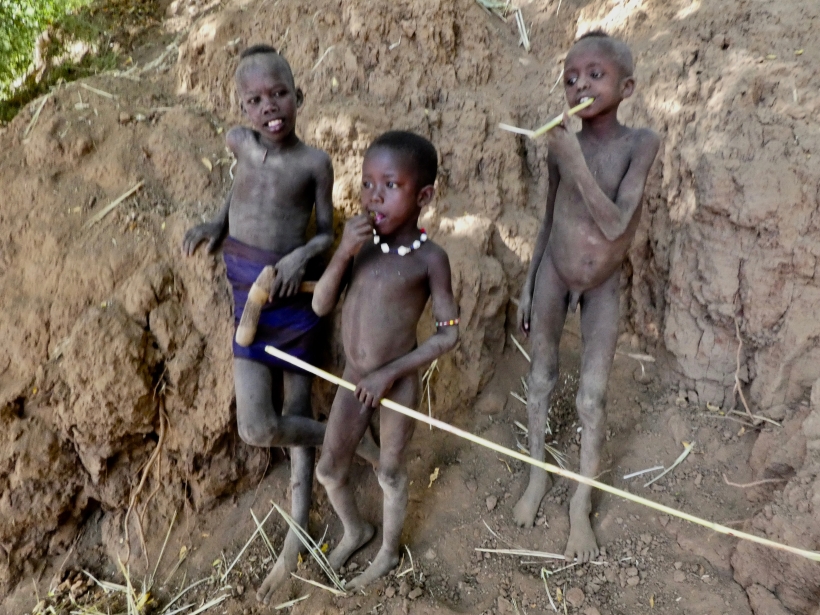 We had to be very careful disembarking from this dugout boat because we had no interest in also slipping into the water.

Here is Ayu talking with a couple other boys.

There were several men working in the field … 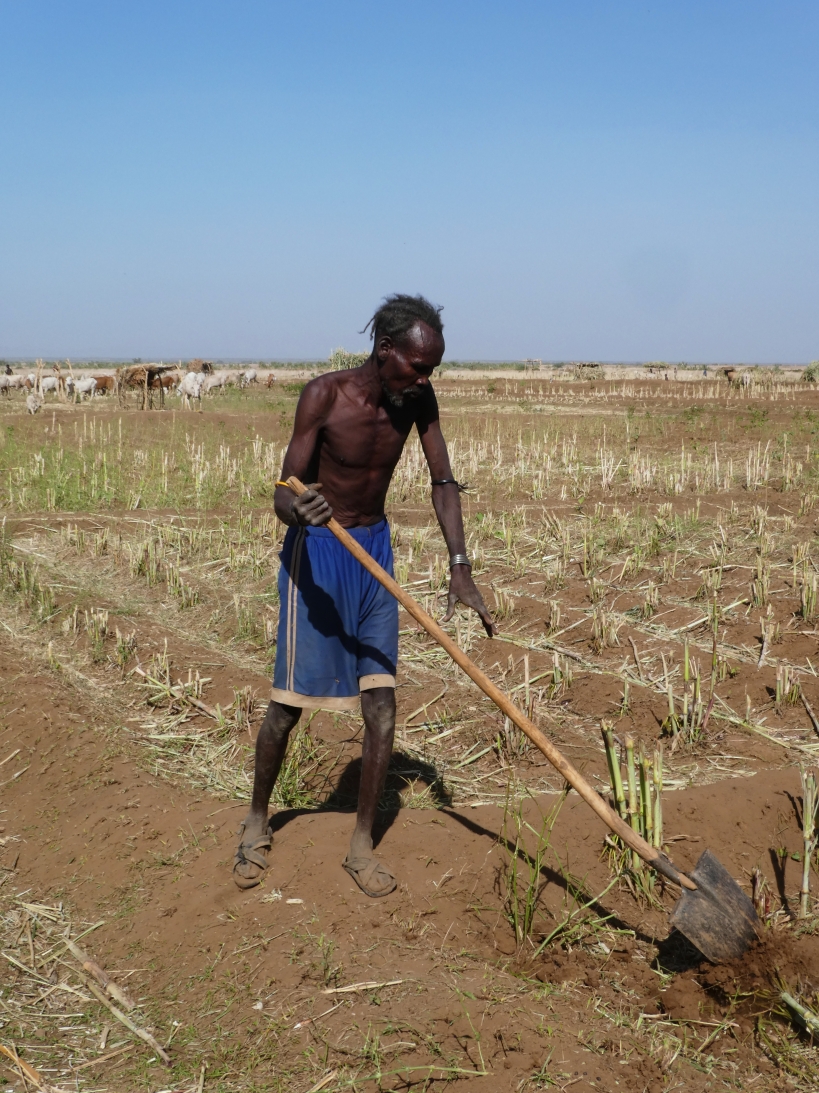 … and a woman who I think may have been grinding the sorghum.

This is another area which required that I pay 200 birr so that I can take photos. That system works better than paying each person. Of course, I took dozens of photos.

The women are adorned with beads and bracelets even as they are working.. 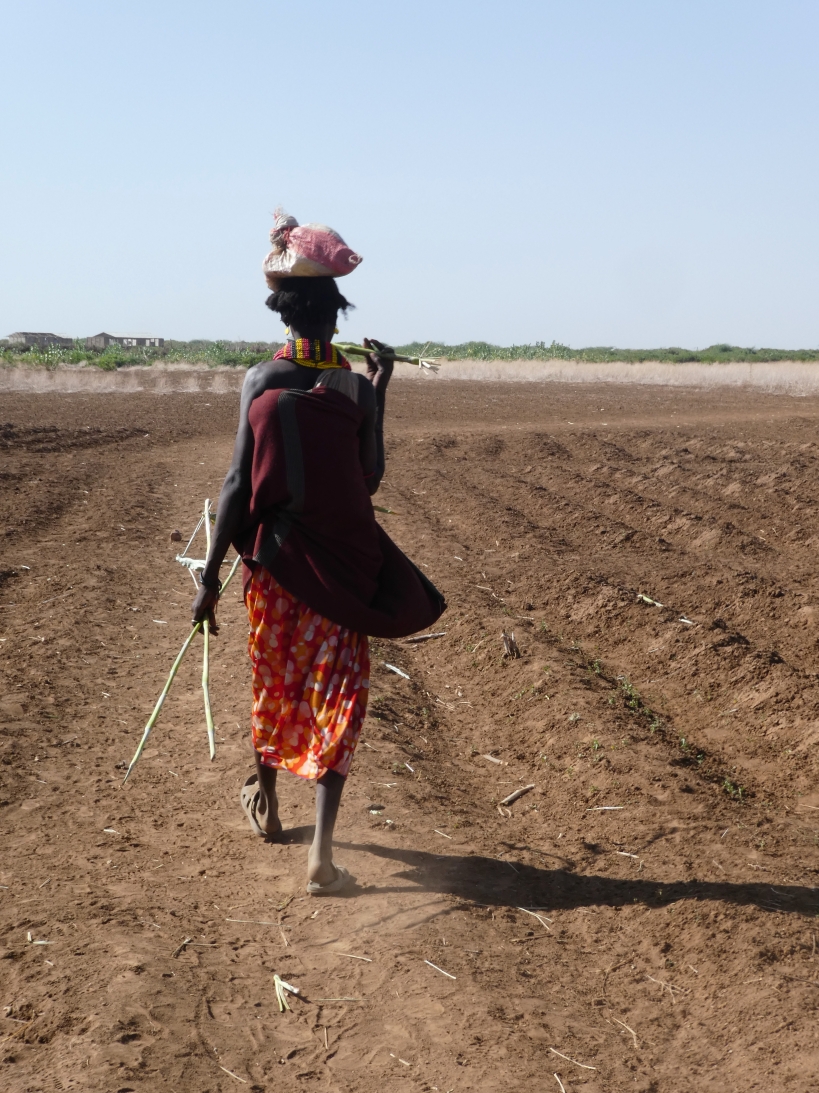 This little girl took my hand and walked most of the way with me to a place where the people were dancing.

The guide said that when the girls finish with their working tasks, that they like to dance. 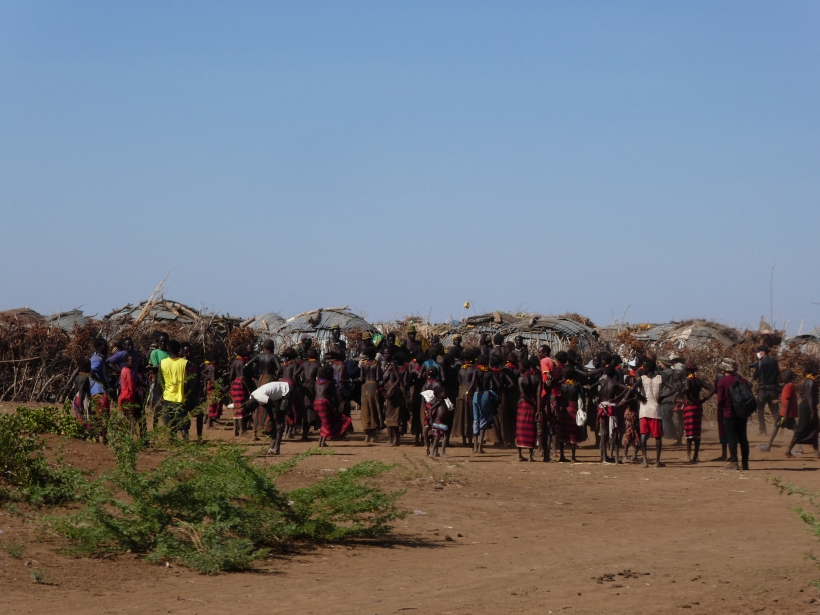 One of the young women invited me to dance with them. The guide took a video of me dancing but it is too hard to post  videos on the blog. I hope someday to figure out how to create a short DVD of all the videos I have taken so far but I think I will need programs that I don’t have on my computer.

I enjoyed taking more photos of the people who were dancing. 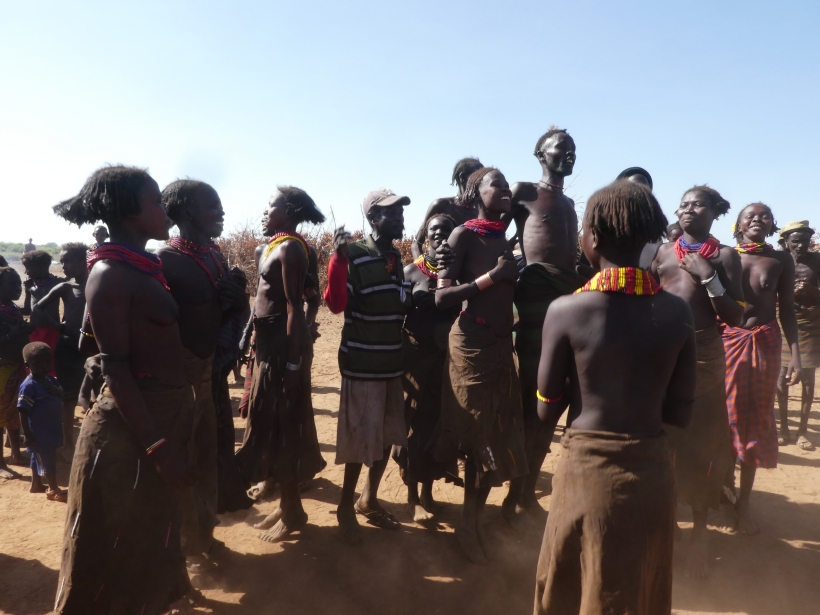 The Dassanech are a nomadic people (occasionally moving to a better place for crops) and their homes are easy to take apart and carry. These houses are dome-shaped and made from a frame of branches, which are covered with hides and patchwork. 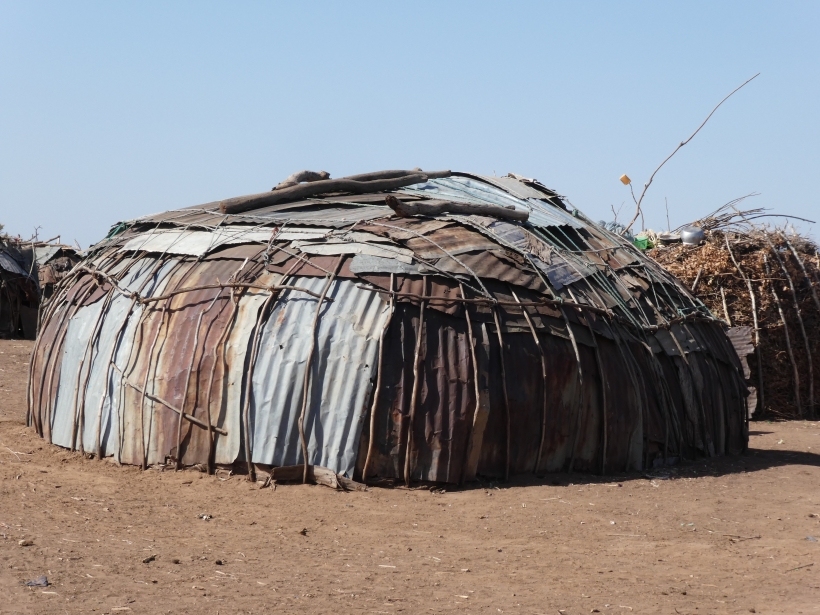 The guide explained that we could tell whether a girl is married by the way her hair is done. Unmarried girls have some of their hair combed to the front or perhaps the sides. Married ones comb all of their hair to the back. The number of knotted parts of the hair at the top shows how many children they have. 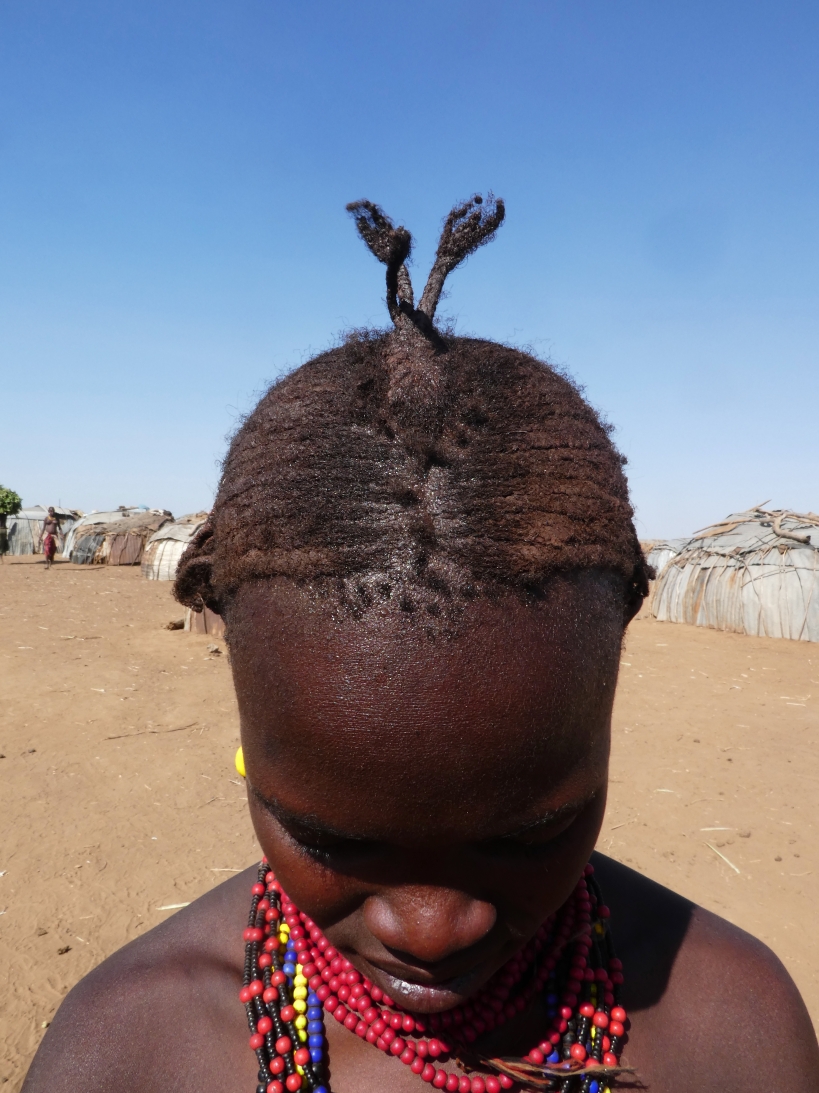 I found it extremely disturbing to learn that this community still circumcises girls (female genital mutilation)when they turn about 10 or 11 years old. We were told that if a girl is not circumcised, she cannot marry and her father won’t receive her bride price, so he has a direct interest in her going through the ordeal. Until they are circumcised, girls are called wild animals or boys to tease them. Girls may be circumcised in their mother’s house, or in another village, but it’s always amongst other girls their age going through the same ritual. When the ritual has been completed, her mother gives her sour milk to drink and a necklace. From then on she is allowed to wear a leather skirt to show she is now considered an adult. Marriage often takes place shortly thereafter.

I read that both men are also circumcised as a pre-requisite for marriage. Male circumcision is known as edimita and boys of a clan undergo it together. Temporary huts are built at the site and the boys are transferred to these huts. During this time, some members of their family visit them to deliver food and other necessities. The circumcision ceremony lasts for three months during which time the boys dance and feast on milk, roasted crops, and meat. On the day of the circumcision, the person who is responsible for circumcisions the clan boys circumcise each boy one by one. Then the boys return home with their parents.

The Dassanech have four types of marriage.

Marriage payments (koyta) can be made both in cash and kind. The koyta is shared among the relatives of the bride but the largest share will go to her father.

As we came closer to the homes, he explained that doors to every home have to be the same height.  Nobody’s door is higher than anybody else’s and all of the doorways are low. 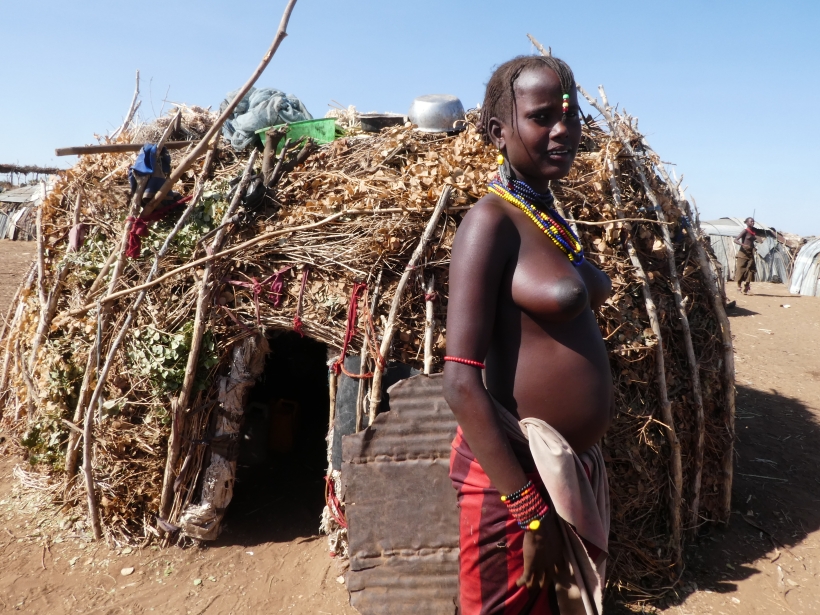 I continued taking photos as we walked through the village.  On the top of this structure is a chicken coop.

These men are enjoying local beer inside a hut where they can cool off. 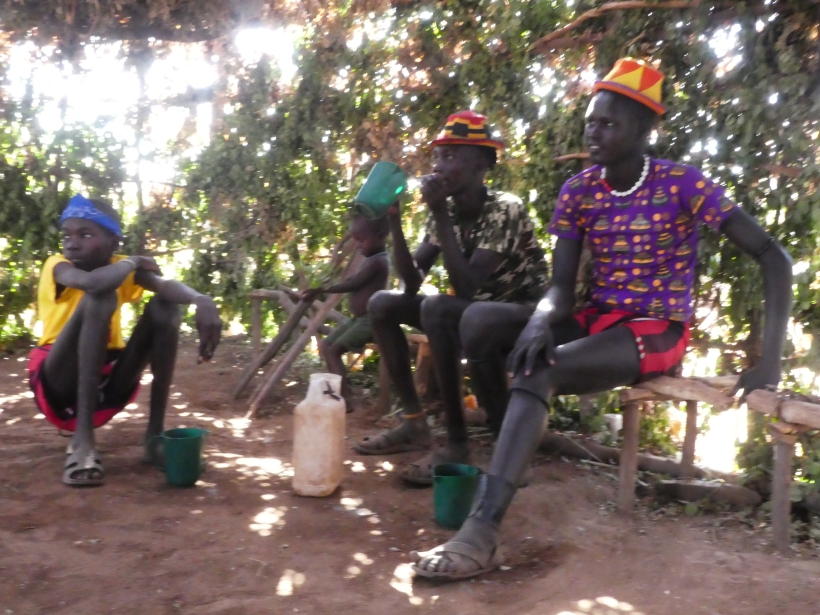 We all stayed in this shelter for a bit.

Wow  – this boys legs are really long.  Ethiopian are known to be really fast runners.  I wonder if he will become one of them. 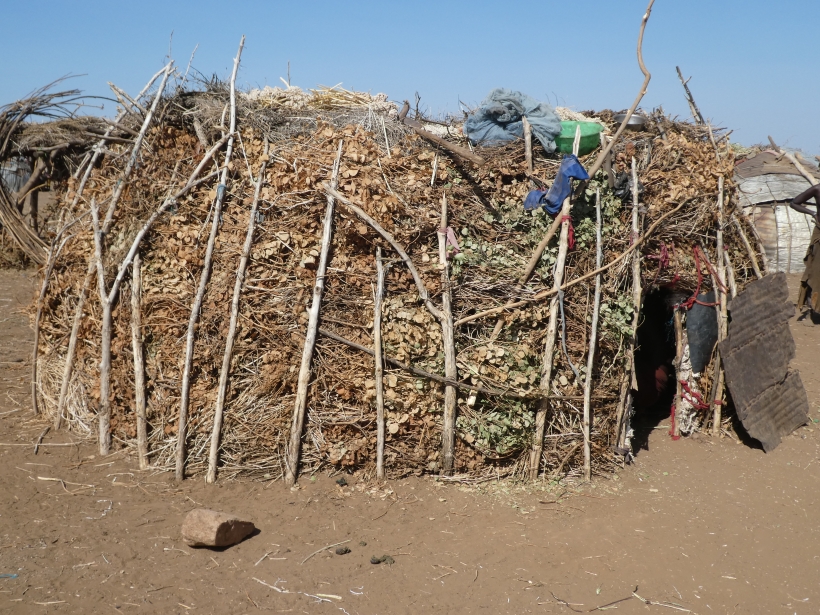 I took this panoramic shot to try and show the number of cows.

The leader of the community is chosen for his honesty and integrity and can remain in the leadership role for a very long time. The guide told me to give the money for the photos to the man who was chosen to be the leader.

We saw a school on the property but I read the following information.

The people’s lives are bound to the fate of their herds of cattle, sheep and goats that they raise. Boys as young as 6 years old start to herd their family’s sheep and goats, while girls marry very young so parents get additional livestock through dowry. Therefore, parents do not send their children to school. In the Daasanach tribe, education is considered as a luxury. For teachers of Alkatekach Primary School this is their biggest challenge. They use the Alternative Basic Education (ABE) system to cater for the need of the children. The Alternative Basic Education system responds to the urgent need for an education that suits the special needs and constraints of pastoral life. It provides flexible school hours, allowing pastoral children fulfill their household responsibilities of herding cattle to find water and pastures while still finding time for school.

The boatmen were waiting with another dugout boat to take us back across the Omo. 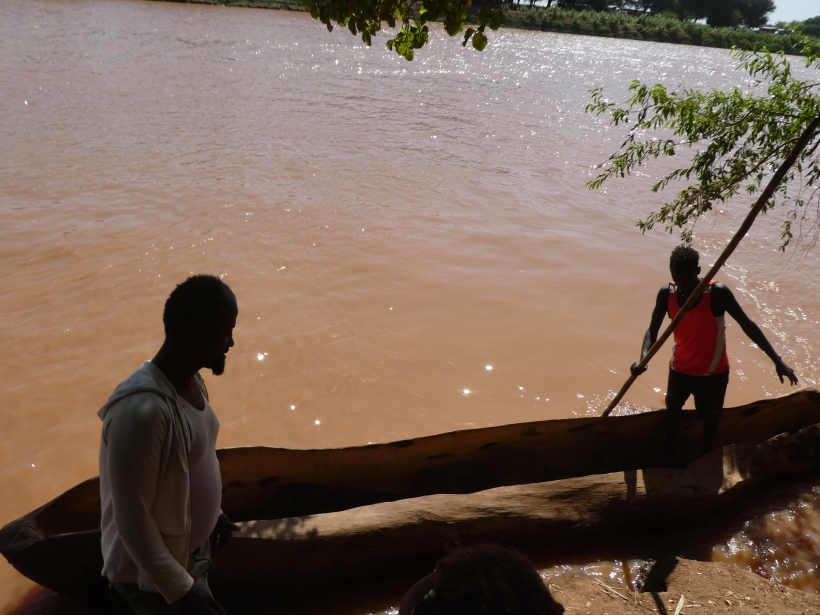 Today was one of the hottest days I have experienced since we arrived in Ethiopia and I was very happy to see the boat again so that we could be on the river.  Getting into the boat from this side was again a tricky maneuver. 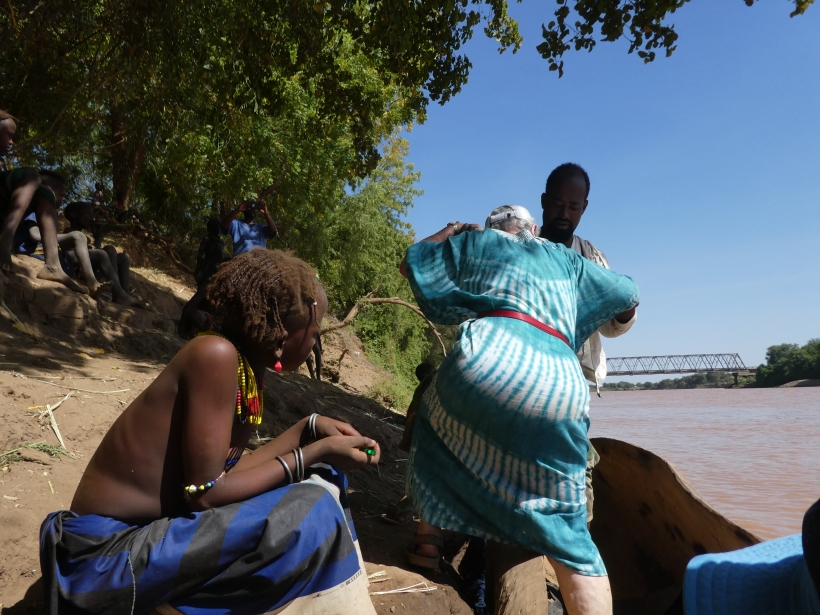 This time we saw cows crossing the bridge. 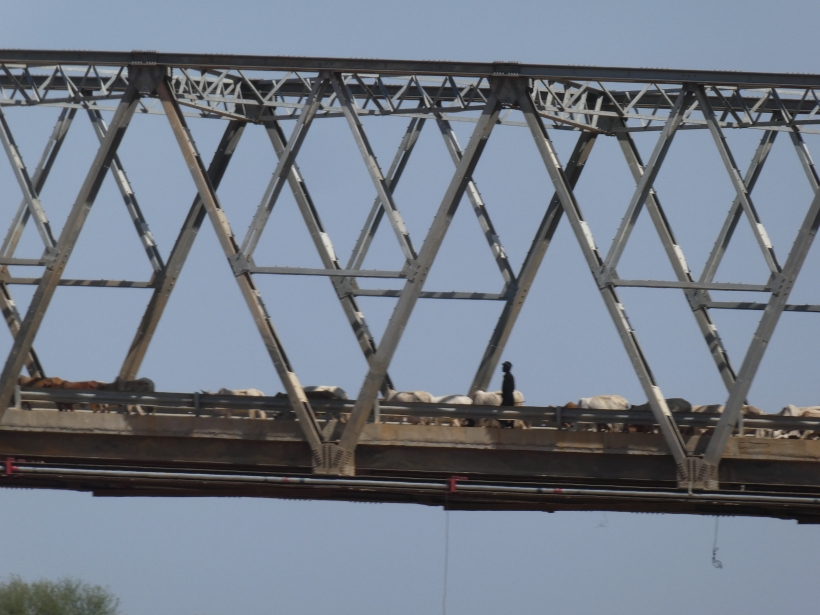 After experiencing this hot day, I am so happy that we did not go to the area that is called the depression area in Ethiopia. This was certainly the hottest I wanted to be. I learned from other tourists that some people who went to the depression experienced heat stroke.  When we got back into the Land Cruiser, I wet my handkerchief and tied it around my head. what a relief.

On the way back to lunch we saw a roller.  I think they are related to kingfishers and bee-eaters. 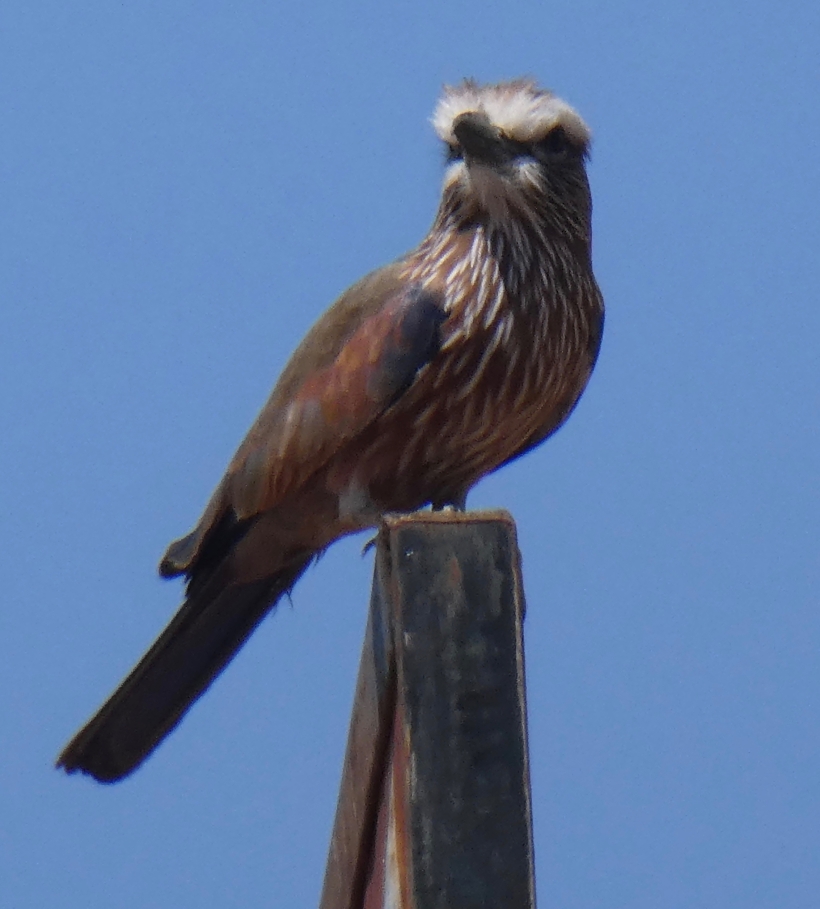 We also passed more vultures devouring a muskrat in the time we were at the village. There are 2 types of vultures in this photo.

From the book I purchased (A Guide to the Ethnic Groups Omo Valley Southern Ethiopia by Minalu Adem) I learned that the Dassanech ethnic group is not strictly defined by ethnicity. Over time the ethnic group has absorbed a wide range of different peoples and it’s now divided into eight main clans. Each clan has its own identity & customs, its own responsibilities towards the rest of the ethnic groups, and is linked to a particular territory. I am not sure which clan we visited.

After lunch we returned to the Buska lodge for an afternoon of relaxation. I was more exhausted (probably from the heat) than I have been on this entire trip. I think it was actually about 104 degrees when we were walking in the sun through the Dassanech Village. Although I have experienced hotter temperatures in other places, this was the first day in Ethiopia that I thought relaxing in the afternoon was a good idea  Jane, Sue, and I  tried to go to the pool at the lodge but the water was much too cold for us.  Another night at the Buska Lodge was quite welcome.