Again Ayu did a fantastic job driving over the difficult road out of Lalibela.   It took us 2 hours and 40 minutes to drive the 40 kilometers. All along the road we could see pilgrims who were walking back to their homes from Genna in Lalibela.

Ayu pointed out people drying both malt and hops. 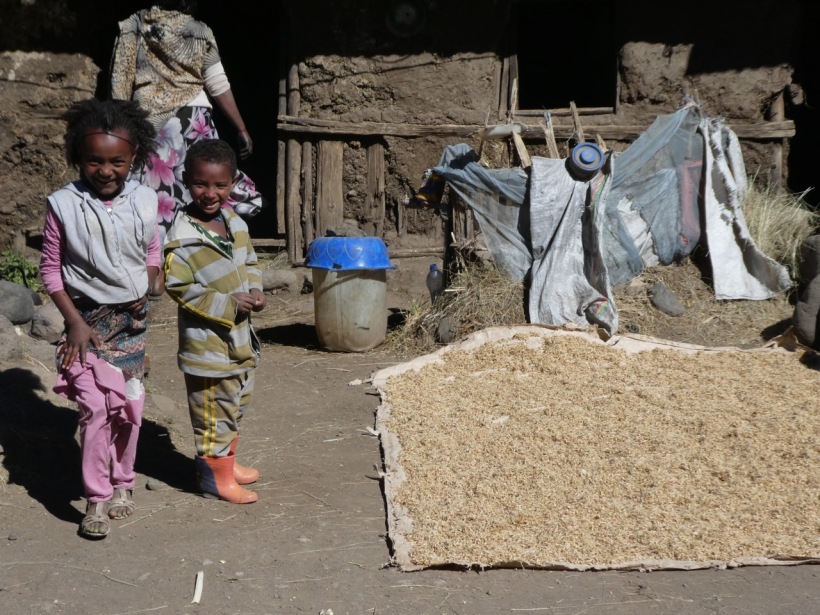 These men were enjoying their beer.

We passed a man plowing his field.

This man is carrying part of a plow.

We passed some children who were carrying 5 gallon containers of water on their backs. The only looked about 10 to 12 years of age.   Although I couldn’t get a photo of them, I did take one of some woman with the the same kind of water containers on their backs.  Five gallons of water weighs almost 42 pounds.  That is a lot of weight for these women and it is hard to believe that even children carry that much. 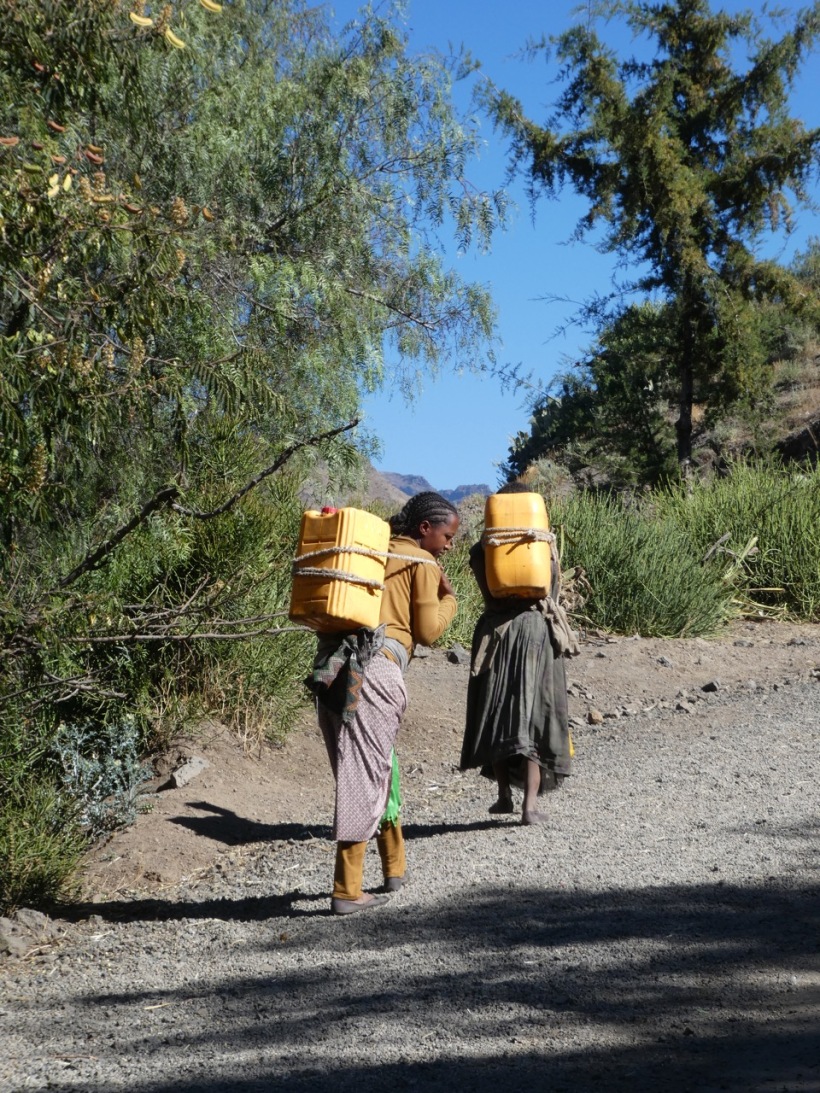 This is the first time I have seen somebody washing a camel.

For lunch we stopped at the same place where Leigh had ordered the chicken pizza that was very good so we ordered 2 of them for lunch this time.  There must have been a new cook because they were not the same quality at all.  We also tried a cheese pizza that was just okay.  Today the donuts were not available.

Ayu stopped to buy some papaya for his family since we are headed back to Addis.

Children always seem to like having their photographs taken.

We stopped in Dessie where Ayu took us to a pharmacy so Sue could buy more cough medicine.  We were now in the Amhara Region.

When we arrived in Kombolcha, there were many blue and white vans on the road.  Ayu said that they call them blue devils because they are such crazy drivers.  He sure can weave our Land Cruiser through the traffic.

We stayed at the Yegofe View Hotel.  There was no elevator so we had to walk up to the 3rd floor (which is actually 4 floors above the ground level).  The restaurant where we had dinner is in another building across from the hotel. The service was extremely slow.  I think the cook can only make one dish at a time and there was a group of Chinese men who had ordered before us.  It was a clean and comfortable place.

In the morning the man at the desk came to tell me that my friend had fainted.  Actually nobody fainted.  When Leigh was walking down the stairs she slipped and fell.  Somebody had spilled water on the marble steps and they were very wet.  It was so lucky that she was holding the railing because she came down about 4 to 6 steps.  She seemed to be okay, but I am still concerned that she is going to be feeling that fall for days.

After breakfast we started our drive back to Addis Ababa.

We saw camels carrying huge loads of wood to market.  I was too slow for that photo so I just took this one of a camel with a smaller load.

Down the road we saw some children carrying bags of dung. They were taking the dung to the market to sell it.

Most of the people along this route are Muslims.  Ayu said that Muslims have increased their population in Ethiopia by over 40% in the last 20 years because of the number of children that they have.  He pointed out some houses that have 2 front doors because the Muslim men in these houses each have 2 wives.

We went through a small, very dusty and crowded town.  We passed stores all along the road.  It seemed strange that the road was paved all the way up to the beginning of the town, unpaved all the way through the town, and then paved again right where we drove out of the town.    The people looked very poor.  I could not take any photos because we had to keep the windows rolled up the whole length of the town and it was very dusty.

These single tracks are for the train that goes to Awash.

Too bad it wasn’t a Monday because we missed the huge market that takes place in Sebeta.  Ayu said that four tribes all gather in Sebeta on Mondays.

We saw many of these carts around the area.

II was finally able to get a photo of children playing Foosball outside.  We have seen this happening several times. 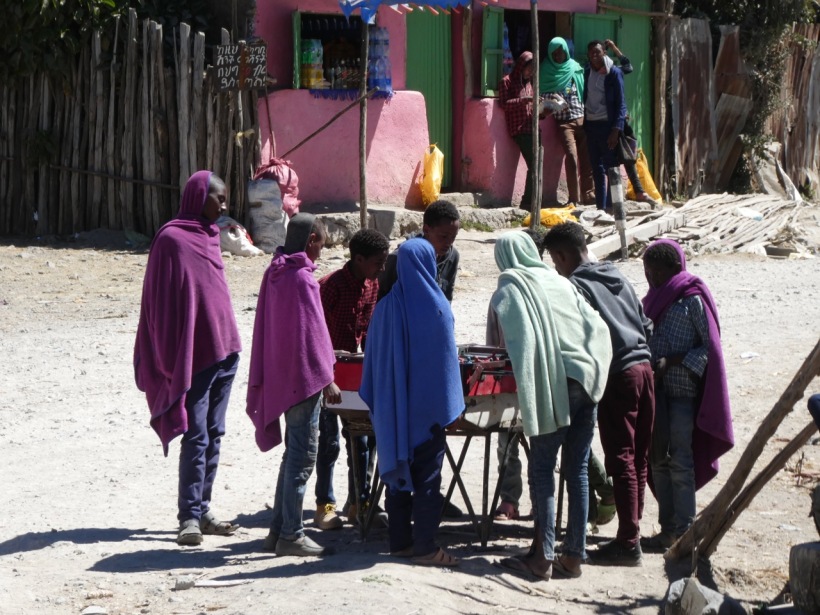 We were in the area where Ayu’s mother and father were born but I believe he said that they were not from the same town.  I think one of them is Oromia and one is Amhara.

Ayu stopped along the road a couple of times so we could purchased fresh oregano and roasted barley to bring home with us.

There were men selling hats along the road and I purchased this fabulous wool hat.  I had no idea where I was going to wear it, but I just loved it.

As we drove up into the mountain area Ayu stopped at a hillside where they were selling a lot of woven hats and purses and other items.  Jane purchased a purse.  Sue and I bargained for her to get a hat for herself at the same price I had paid earlier.  Leigh bought some kind of an harp like instrument and also bought a hat for a friend.

Of course we needed photos with the view.

We were driving over Tarmaber Pass and the views were beautiful.  I think that Ayu said that Tarma means honey and ber means gate so it means the gate of honey.

At one point we drove through the tunnel which I think was constructed during the Italian invasion.

We stopped in Debre Birhan for lunch at the Getva Hotel.  The soup, french fries, and chai were delicious. Debre Birhan means light of the mountain.

I am not sure where it was but we passed a place where Ayu said they produced wool blankets.  We were interested in seeing them so he turned around and went back to the factory.  Most of the blankets were much larger than anybody wanted, but I found a green one for my daughter and purchased it.  I was happy that I packed a foldable duffel bag in my luggage so I can take the blanket home.  I think that Ayu said he used one like it when he was younger.

The traffic coming back through Addis was extremely busy.  We were very glad that Ayu knew many short-cuts through the city.

We repacked our luggage so that we could leave the things we weren’t going to need (including the blanket and other purchases) on the rest of the trip.  The Jupiter Hotel stored everything we left in my duffel bag and Leigh’s extra suitcase.

The northern part of our wonderful adventure is over and we will head for the south tomorrow.