Over 100,000 pilgrims come to Lalibela to celebrate both the Orthodox Ethiopian Christmas and King Lalibela.  Wow – we we are here..

Ayu drove us up to the area of the rock churches where we met our guide, Zerdu.   We started walking towards the churches. This is the day before the Ethiopian Christmas. There were pilgrims everywhere.  Leigh asked if there was a place where she could just rest in the shade and wait for us.  Zerdu found 2 men to stay with her and told her to wait under a tree in the shade.

The pilgrims were sitting all over the ground. 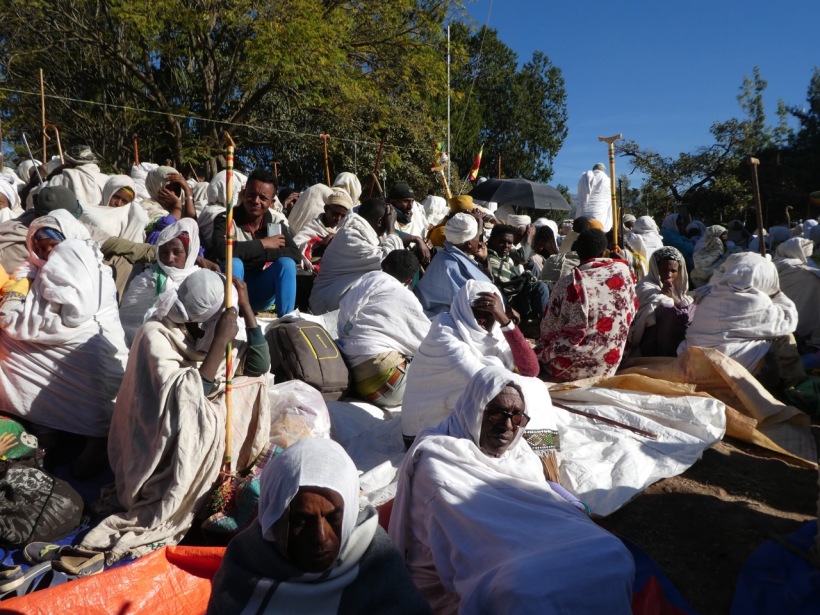 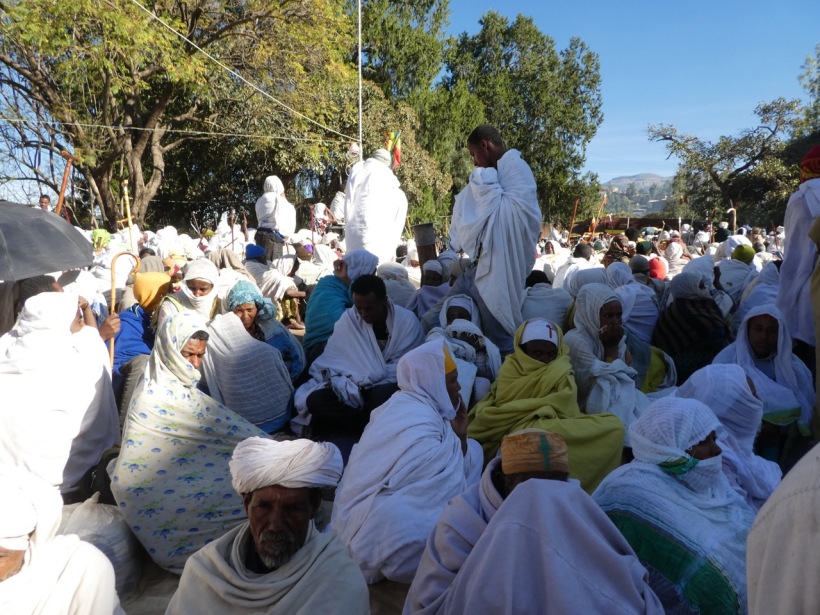 These two women were sitting under a tree in the shade.

They were mostly dressed in white. I love taking photos of their faces.

We had to wait for Zerdu to buy our tickets so that we could enter the churches.

Many pilgrims were standing on the walls.

We knew we would have to get into lines and pass through narrow passages with the pilgrims who were waiting to get into one of the churches. 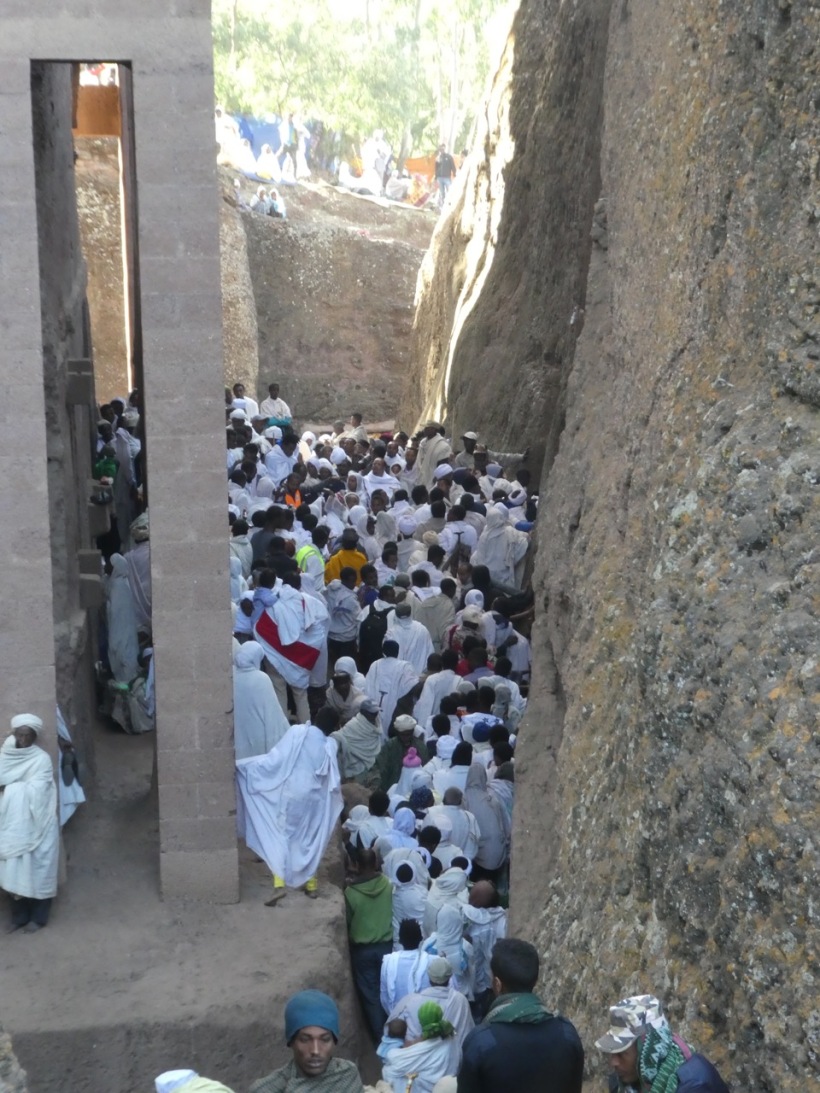 Everybody was so jammed together and we had to follow them.. I knew that this was going to be quite a day. 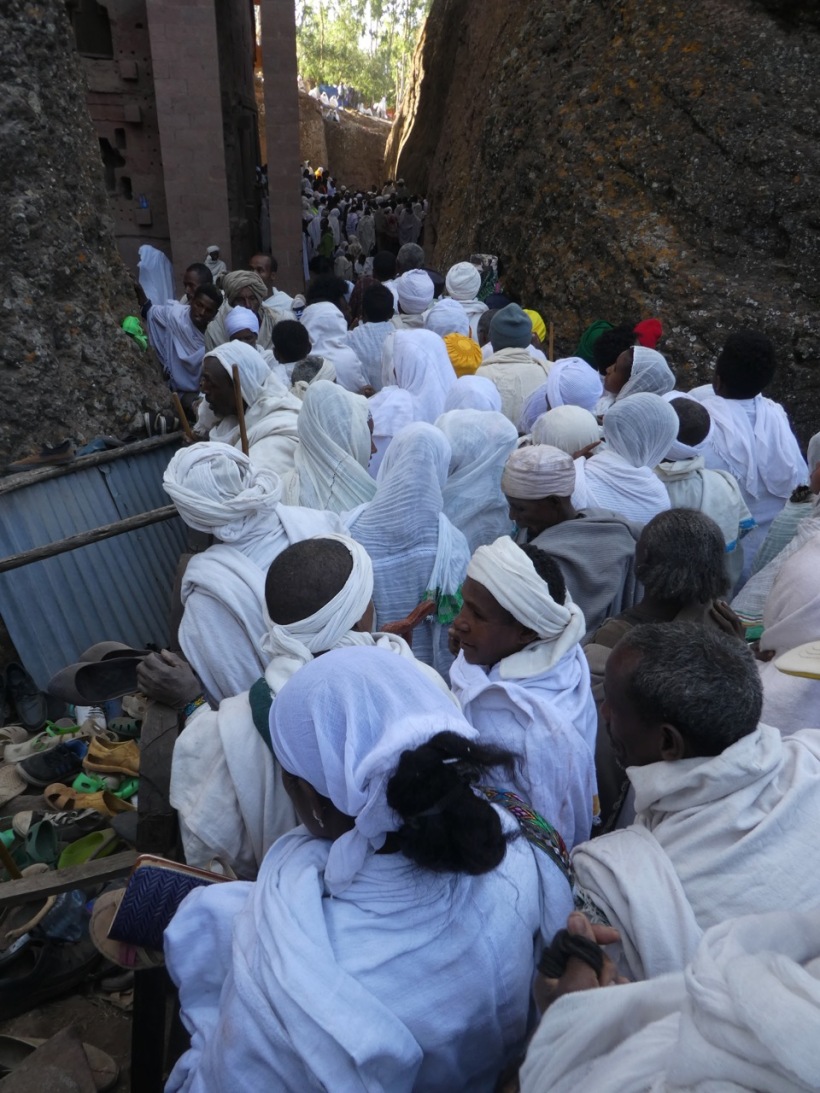 It was hard for Jane, Sue, and I to stay together with Zerdu. There were many stairs to go down and there were shoes left all over the stairs. You can’t enter a church wearing shoes.

I asked Zerdu how all of these people ever found their own shoes again and he told me that when they leave the church, they just take any pair that fits their feet.  We had to take off our shoes as we entered each church.  Zerdu took a man with us who watched our shoes and our poles when we entered a church or didn’t want to carry the poles with us.

There are actually 11 rock-hewed churches in Lalibela. They date back to the 11th and 12th centuries. Their building is attributed to King Lalibela who set out to construct a ‘New Jerusalem’ after God apparently appeared to him in a dream sometime after Muslim conquests halted Christian pilgrimages to the holy Land. Many of the churches are named after ones that are in Jerusalem. The city is, of course, named after King Lalibela.

The churches that we visited in the past few days were carved into a mountain (semi-monolithic). The churches in Lalibela were hewn from the living rock of monolithic blocks. These blocks were further chiseled out, forming doors, windows, columns, various floors, roofs etc. This gigantic work was further completed with an extensive system of drainage ditches, trenches and ceremonial passages, some with openings to hermit caves and catacombs. Amazingly, they only had hand tools like hammers and chisels.

It would have been much easier to take photos of both the inside and outside of these incredible churches at another time of the year when all of the pilgrims were not there. But it is the pilgrims that made the experience so rewarding.

This of the top of the Church of Bete Giyorgis (Church of St. George). It is in the shape of a cross. 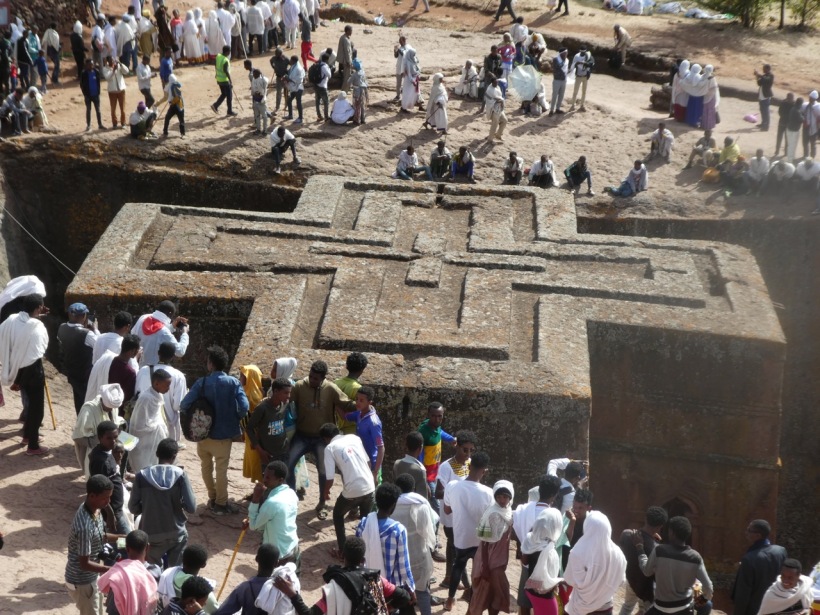 You can see one of the original drainpipes that was installed on the top of St. George. These drainpipes are on three sides. Because they church is higher on the 4th side there was no need for one. It is amazing how brilliant the people were at the time these churches were carved out of the rock. 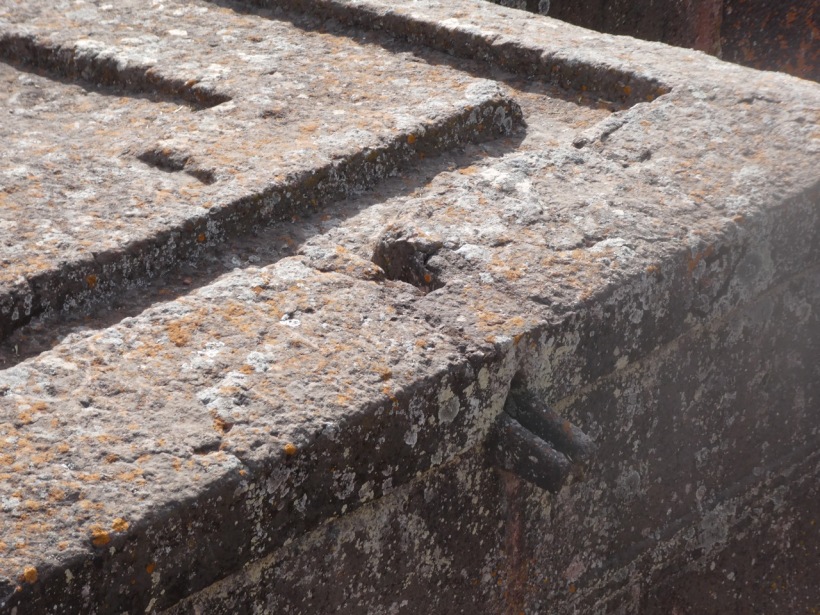 This is a side-view of Bete Giyorgis 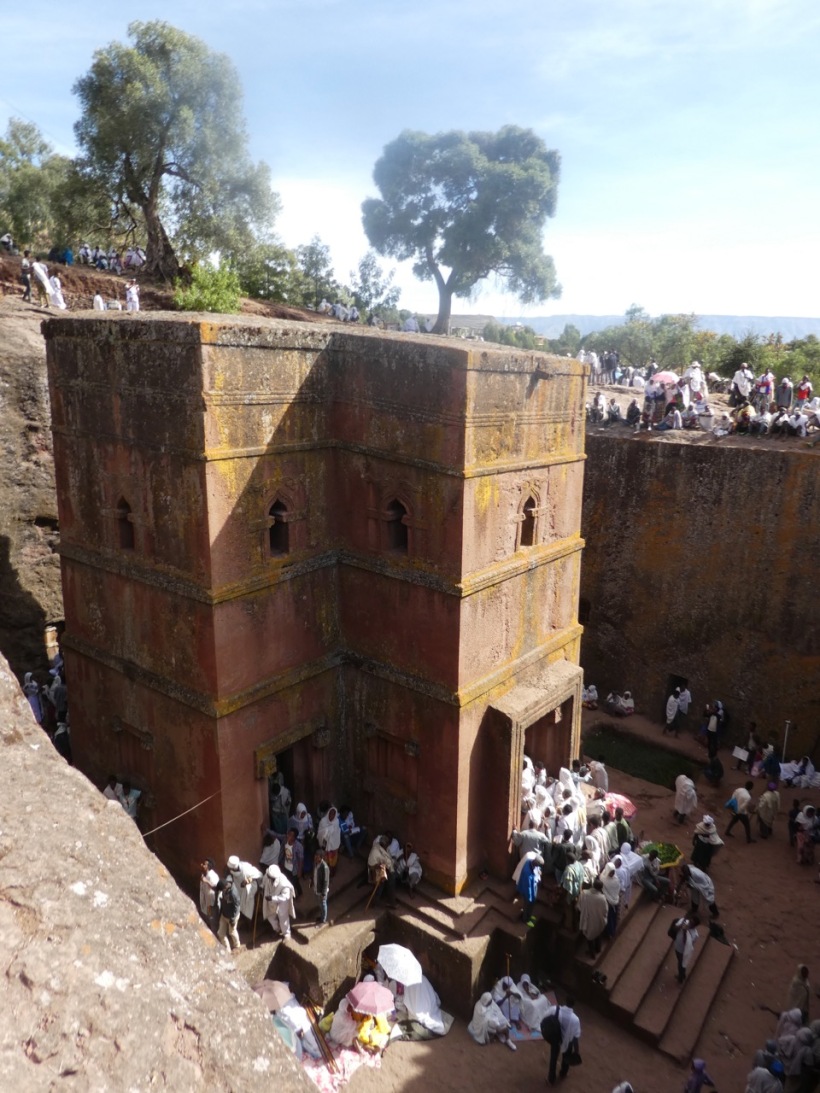 I think this is Bete Medhame Alem

UNESCO covered the church with a metal covering. The people of Lalibela are not happy with this because it really distracts from the beauty of the church. I agree with them.

This is a photo of Bete Medhame Alem that I took from the web. 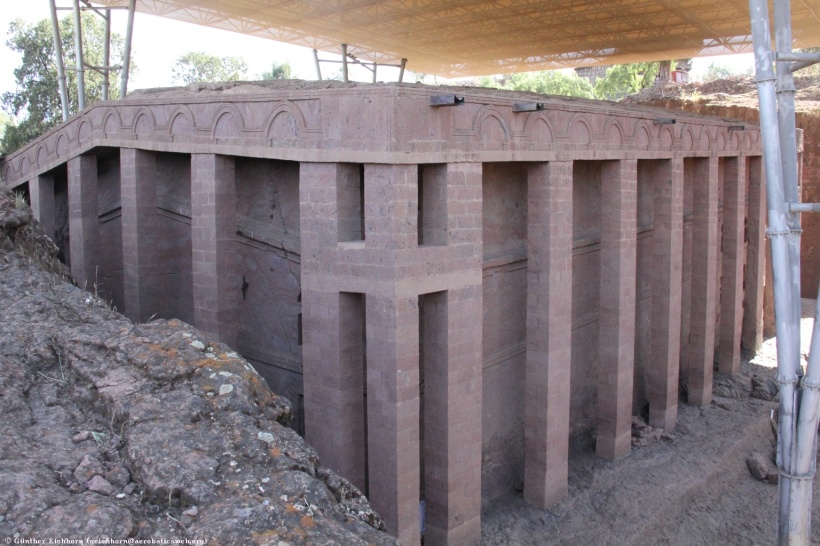 As we came out of one of the churches, a man wanted to take a photo with me.

This round structures are in the style of King Lalibela’s house. The pilgrims who arrive many days in advance get to stay in these houses. All of the others sleep on the ground all around the churches.

I think this “Fertility Pool” is still used. It is believed that it helps women who are having trouble conceiving a child. I read that the Fertility Pool is especially notable as once a year, hundreds of naked women struggling to conceive are lowered by rope into a pool, while hundreds of men look on from the cliffs above.

In one of the churches, this priest was blessing people. He is holding a special cross. 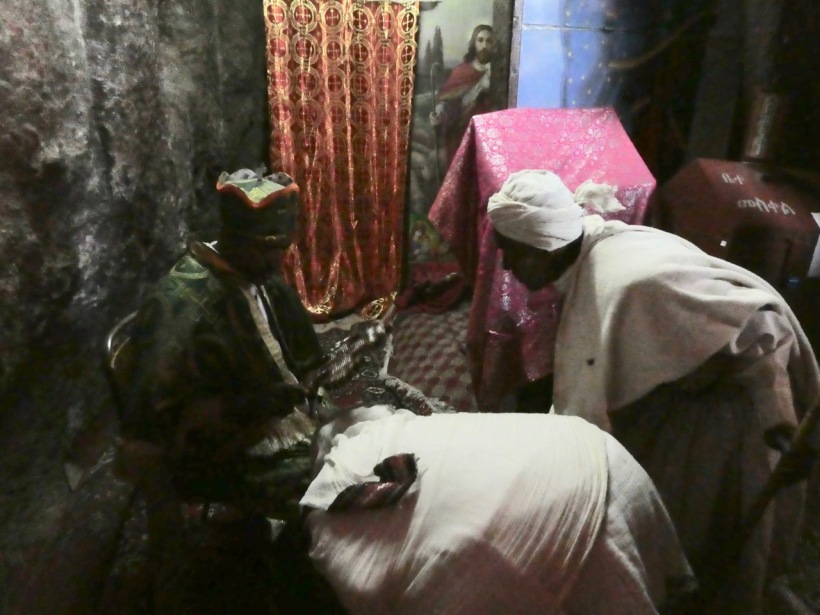 The ceiling, pillars, and inside of the arches were amazing. 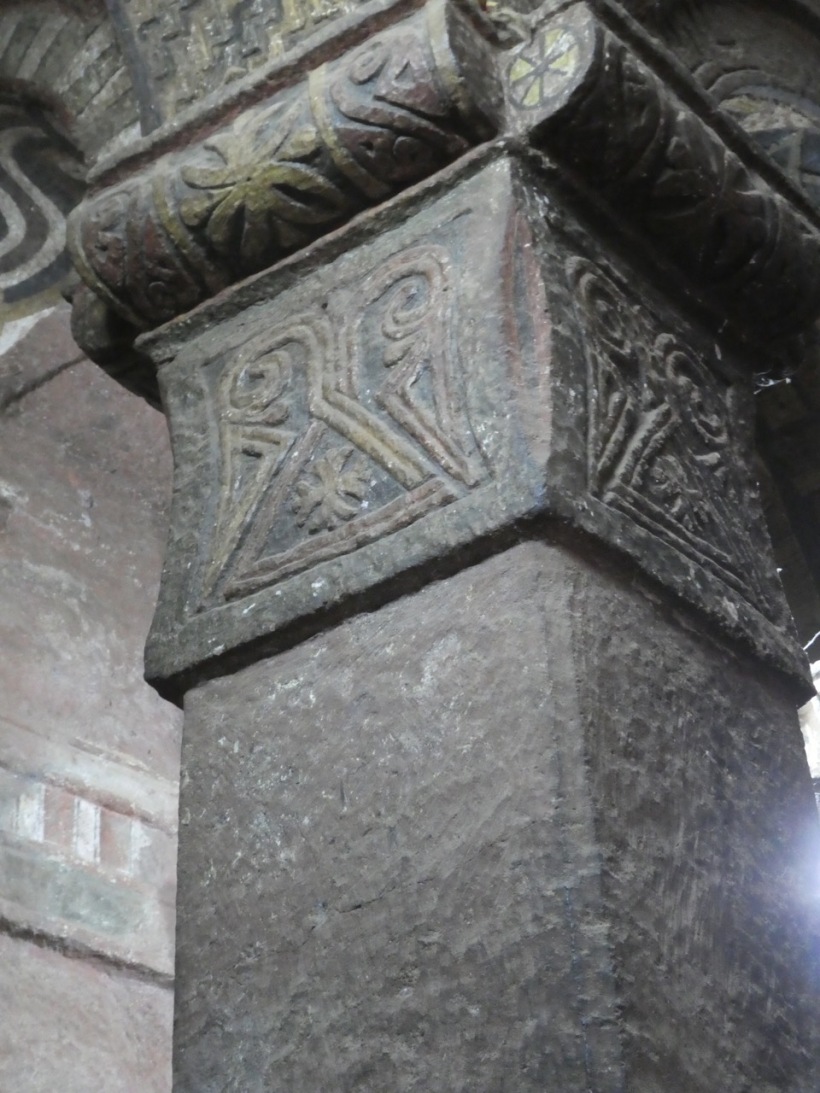 To enter each church, we had to patiently wait in very long, packed lines. 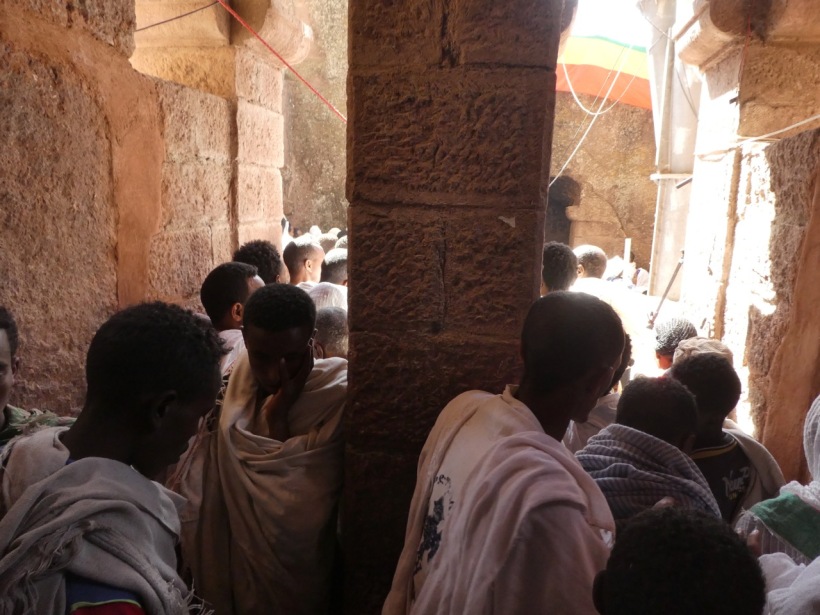 Zerdu actually was able to get us into a place under the tent cover for an incredible experience. The priests and deacons of the church were gathering for a celebration. We arrived early to get a place to sit and watch the priests greeting each other. They brought out special drums and sistrum. There were very few other tourists there with us. The ceremony was being broadcast throughout the area and on TV.

This is the High Priest of Lalibela.

Here he is blessing one of the many other priests.

This is one of the special drums that they used today. 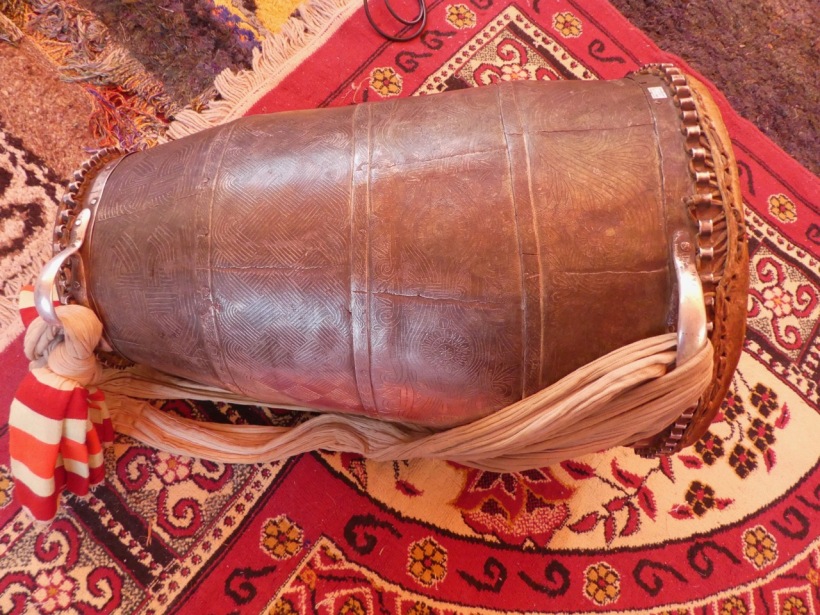 Some of the priests sit in these chairs. 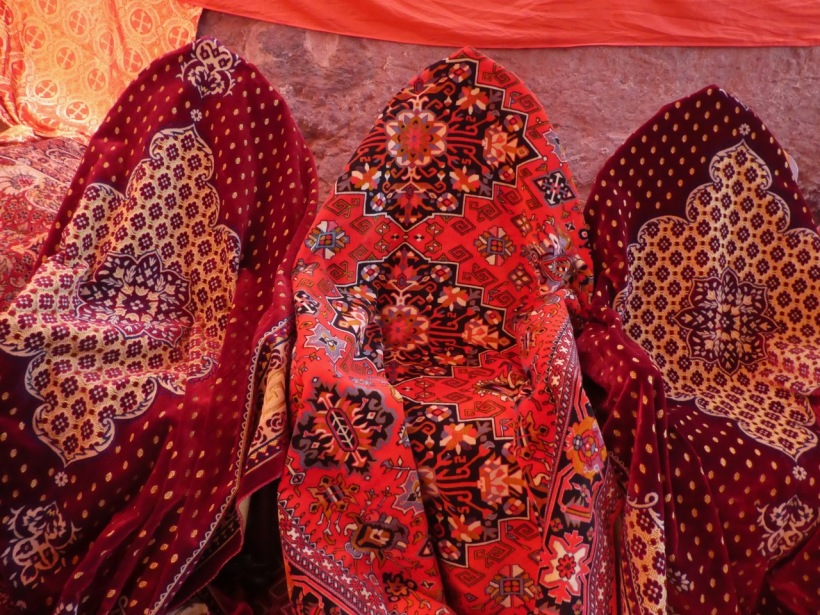 One of the priests let me photograph his sistrum. 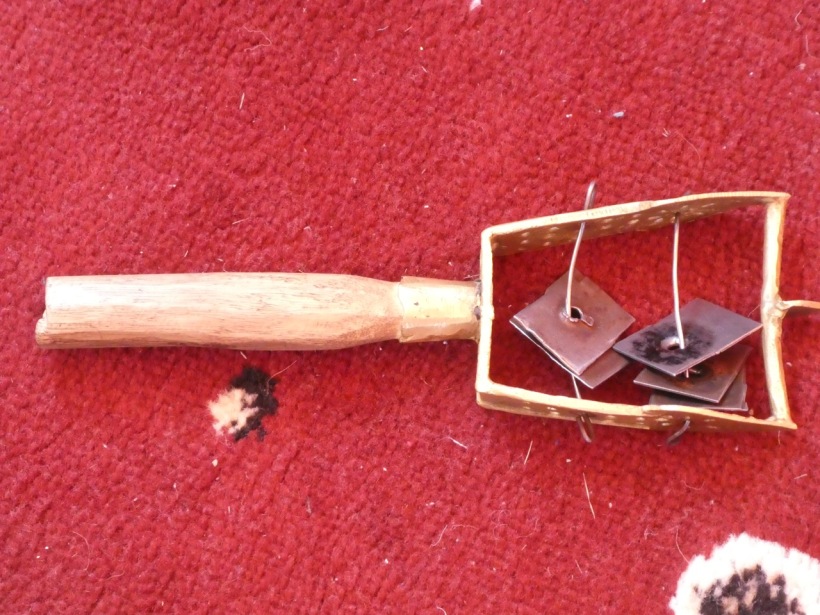 Many priests sat around and visited with each other. 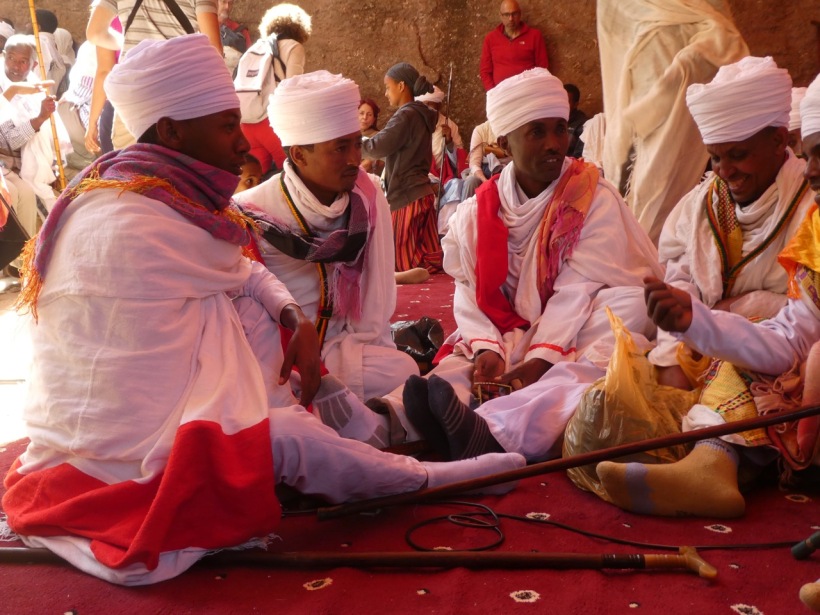 A bell was rung to let everybody know it was time to begin the ceremony. 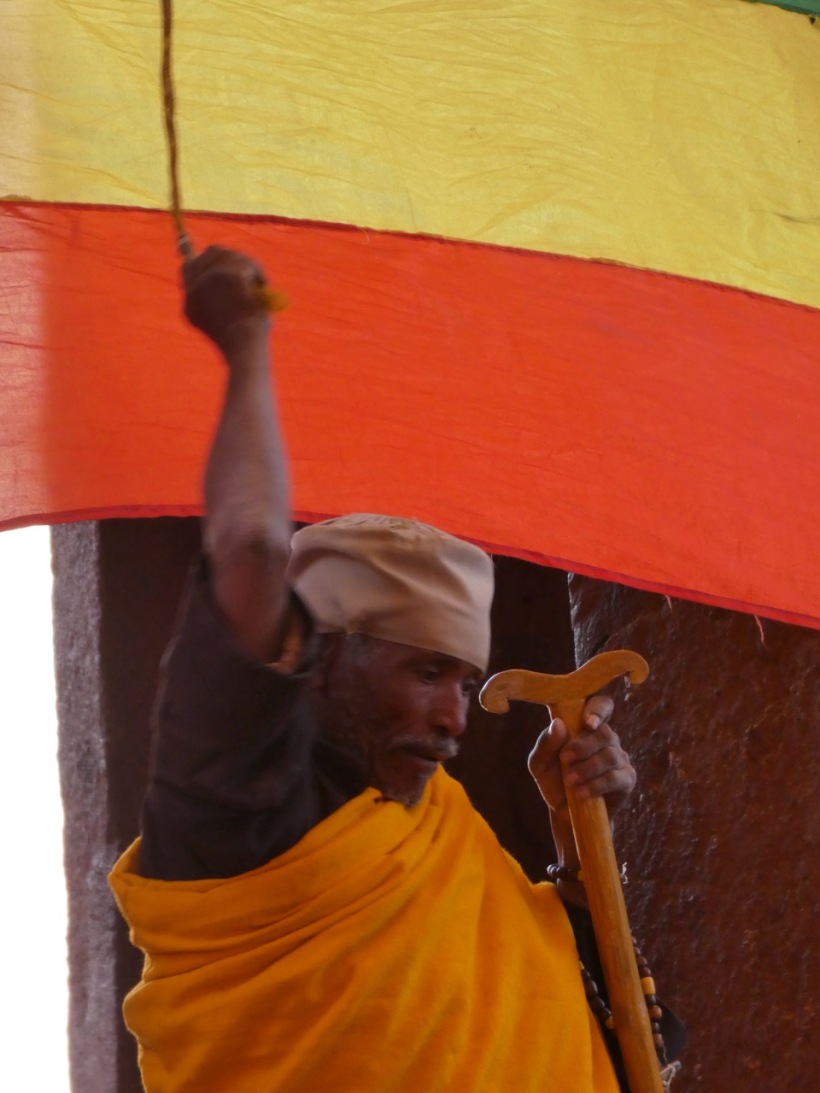 The priests had come from many areas of Ethiopia. Here are a couple others with the High Priest of Lalibela.

We watched for a long time.  A few of the people who were standing next to me left with their guide but Zerdu encouraged us to stay longer.

We were very glad we stayed because after a bit, the dancing began. The high priests moved back and forth across the floor ad they raised their prayer sticks and played their sistrum. 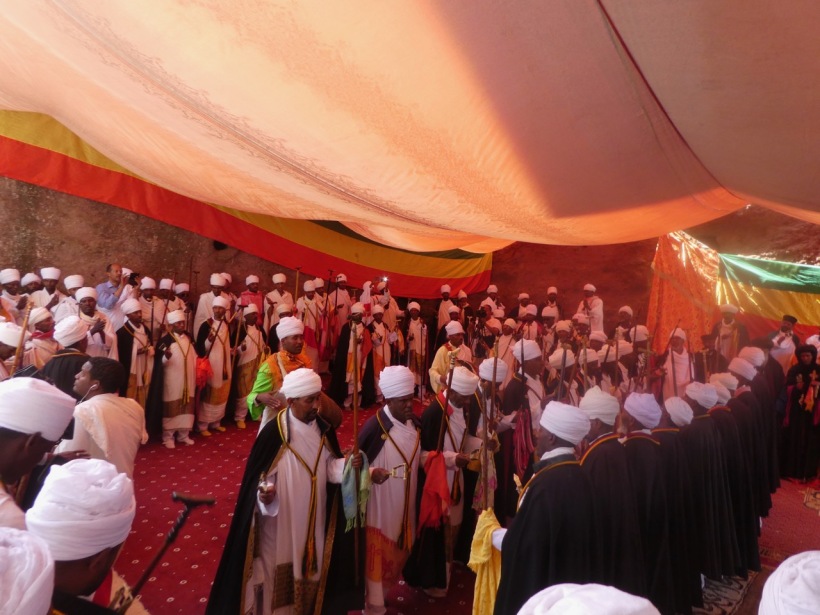 One of the priests who was watching with us gave me his prayer stick and systrum (or sistrum). What fun.

And the bowing, drumming, chanting, and dancing continued.

Zerdu finally said it was time for us to leave.

To get out we had to walk across this grating. 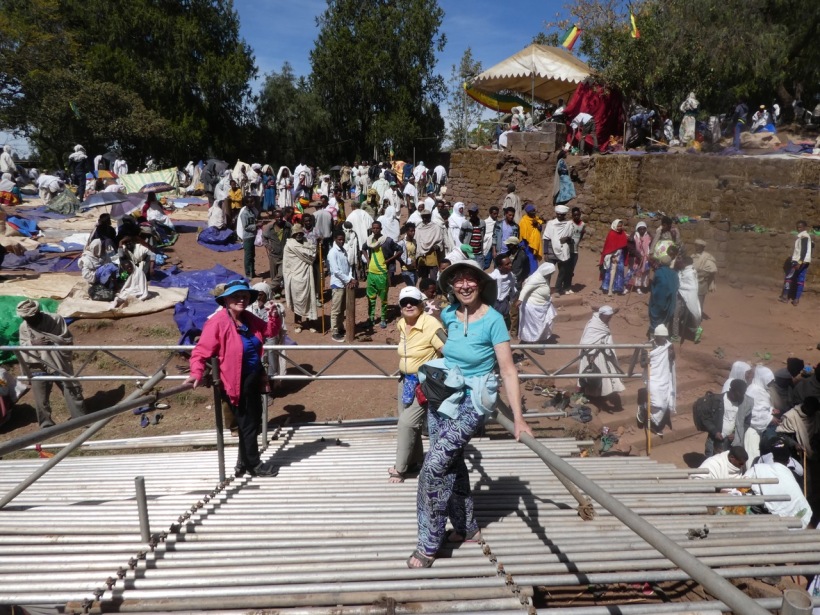 We continued walking through the area where the pilgrims were camping. Zerdu told us that the people of Lalibela prepare food (all vegan) for the other pilgrims to eat at a very low cost to them. 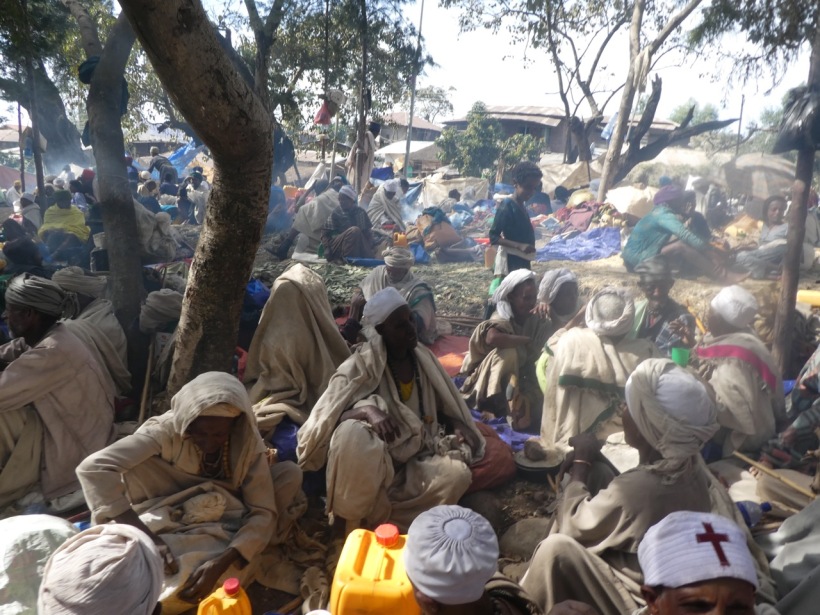 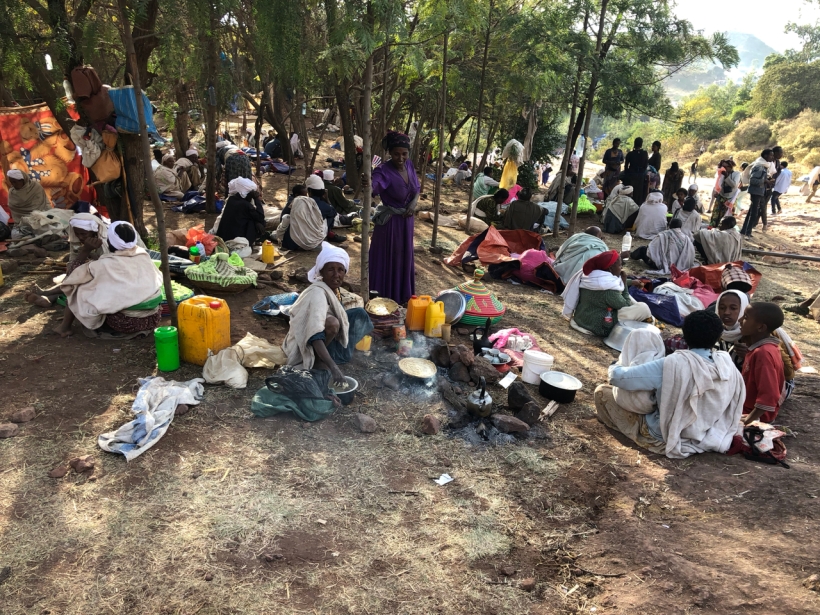 This woman was showing me what she had cooked.

We continued walking through the area. These people are selling prayer sticks.

For a bit of fun, Susan pointed out these pilgrims with Santa hats.

My favorite photos are still the ones of their beautiful faces. 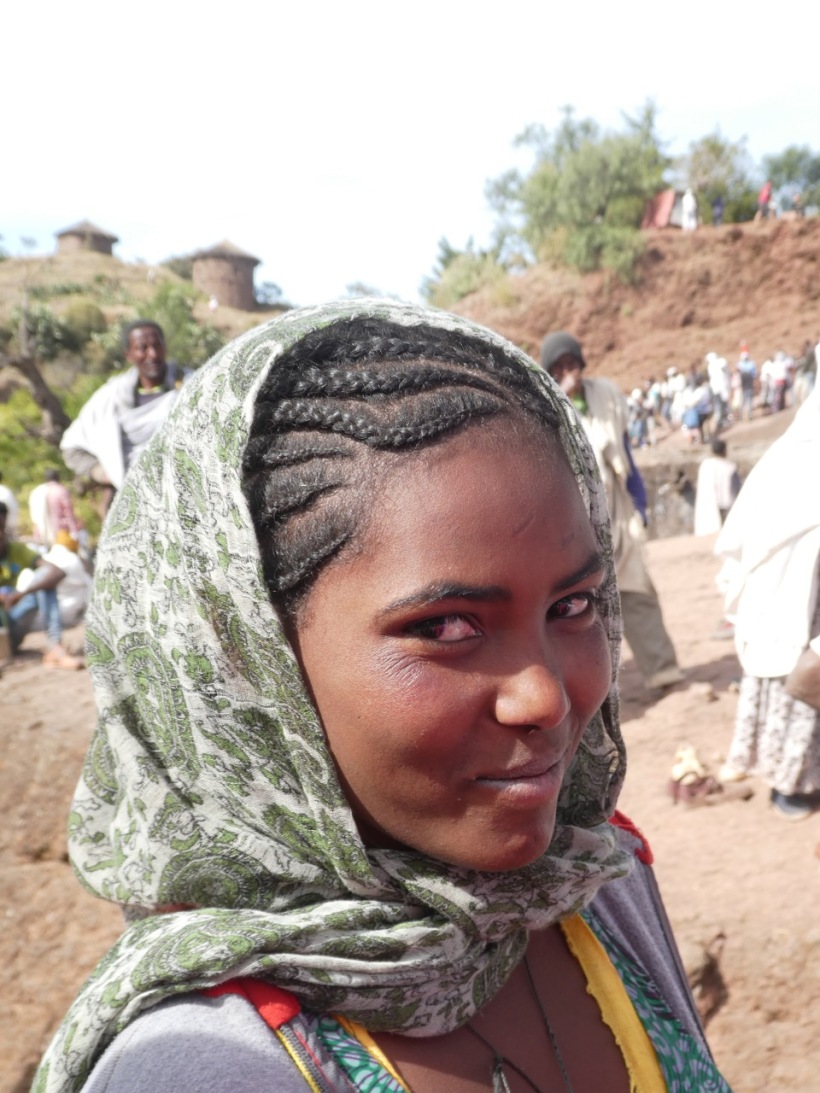 When we got back to the tree where we left Leigh, we could not find her.  Zerdu looked all over and asked several people if they had seen her and the two men he left with her.  Zerdu was concerned and frustrated but after looking for a while, we continued walking with the crowds to another church 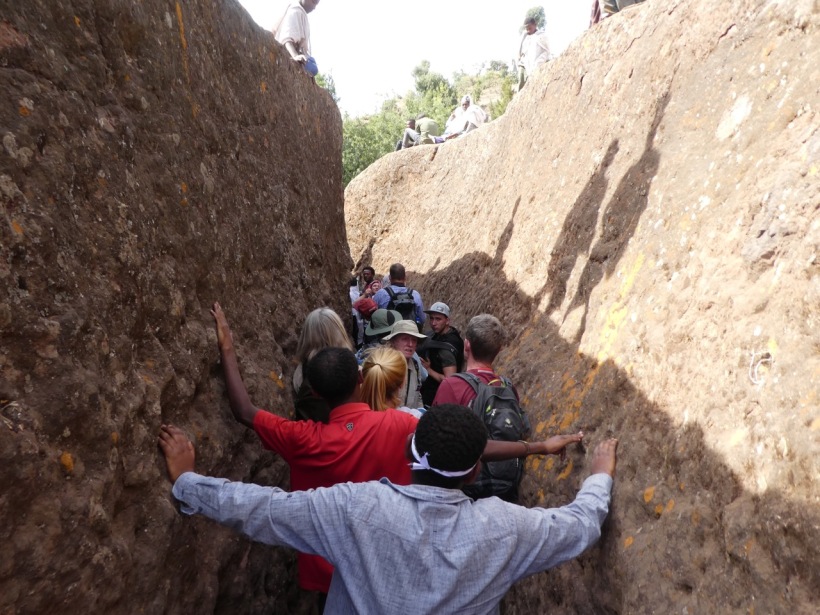 We had to walk through a tunnel. 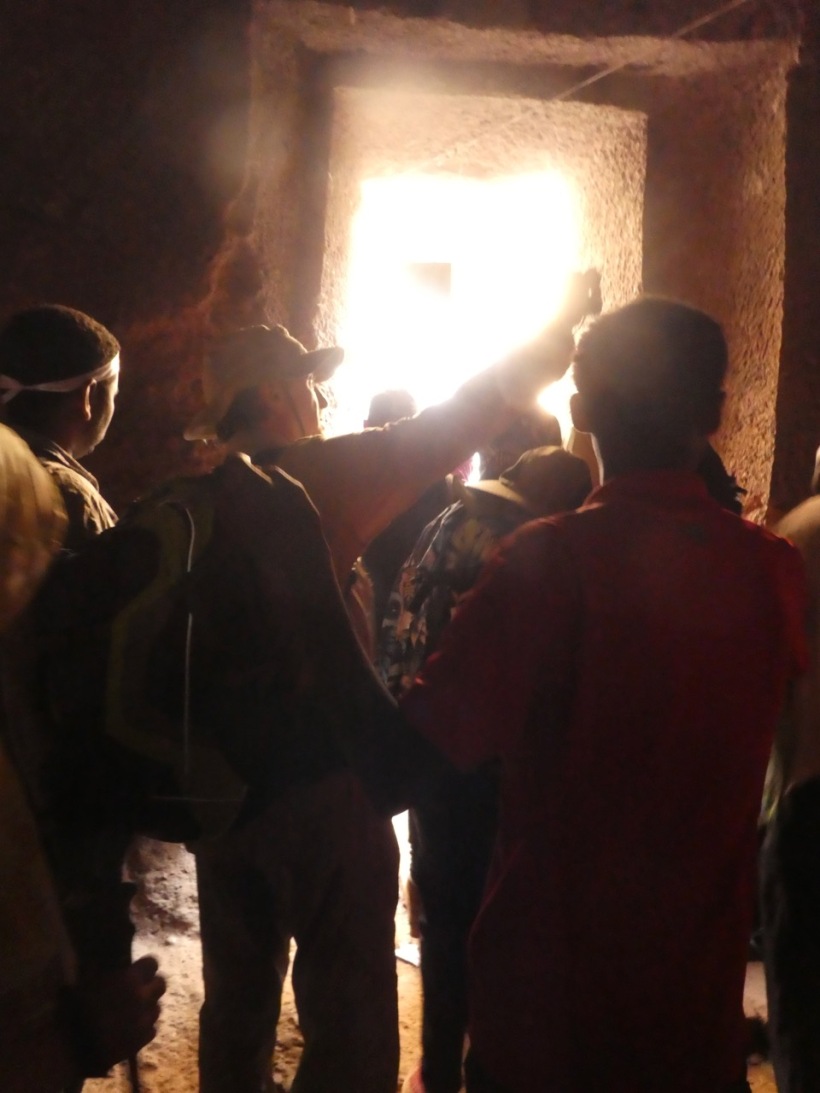 We had to come climb out of one of the tunnels.  Here is a man doing that.

Before we entered the next church, we had so much fun watching the women dancing and chanting outside the church

We took photos with other people while we were waiting to go into one of the churches. 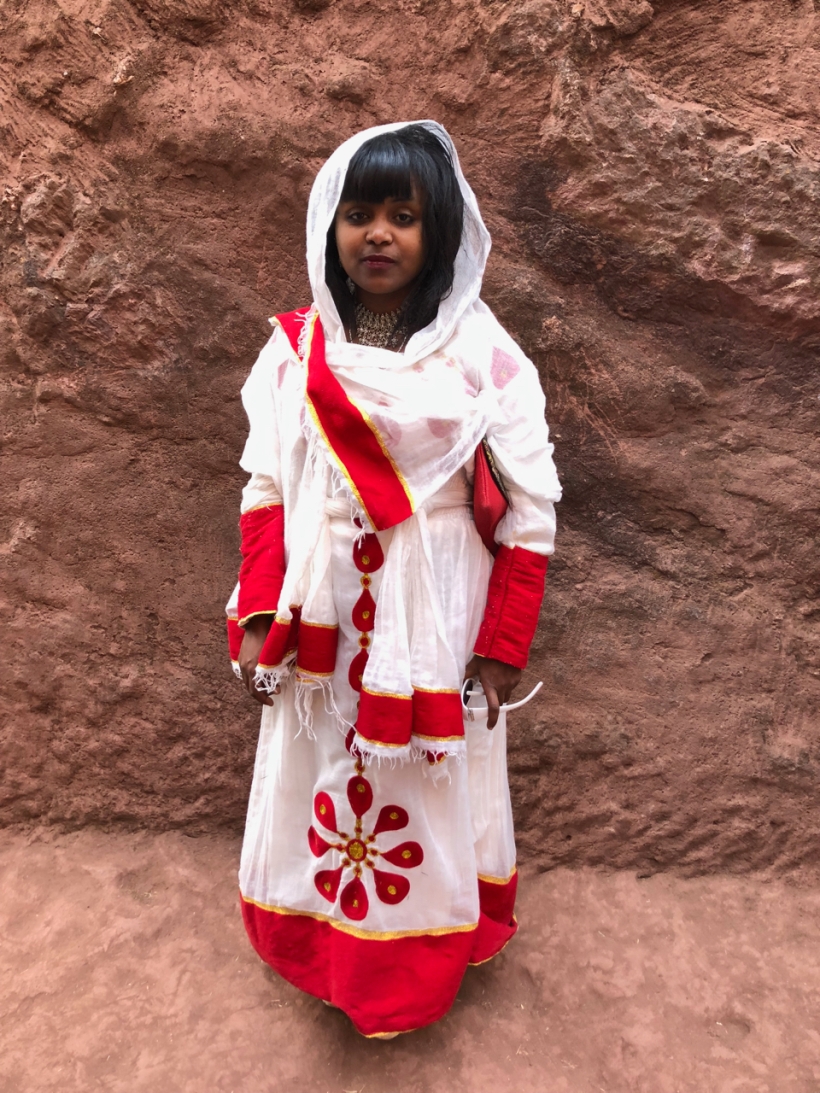 Zerdu then explained that there was another church to see but we would have to go through another tunnel to get to it. Normally it would take less than 15 minutes, but today it would take over 1½ hours. We, of course, decided not to get in that long line.

On our way back to the jeep, I took a close-up of one of those typical houses.

We went back to find Leigh but we could not find her.  Sue, Jane, Zerdu, and I were very concerned.  Zerdu made several phone calls and then we found Ayu.  Ayu had received a call from another Vast Ethiopian driver and we discovered that that driver was taking Leigh back to the hotel.

When Leigh returned to the hotel, she told me that she had been waiting on a wall near where we left her. She had also been worried. We had looked all over when we were at the tree and I don’t know how we could have missed her.

After dinner Sue Jane and I went back for the evening celebration.

We again walked through the crowds of pilgrims.

Many of them were sleeping so that they could be ready to go to the early morning Mass.

This man was selling torches to take to the celebration.

It was very, very difficult to walk over the uneven ground, up uneven stone steps, over that grating we had crossed in the morning, and maneuver through the massive crowds. But Zerdu got us to a place where we could actually watch the celebration. We were standing way up high but could still see. 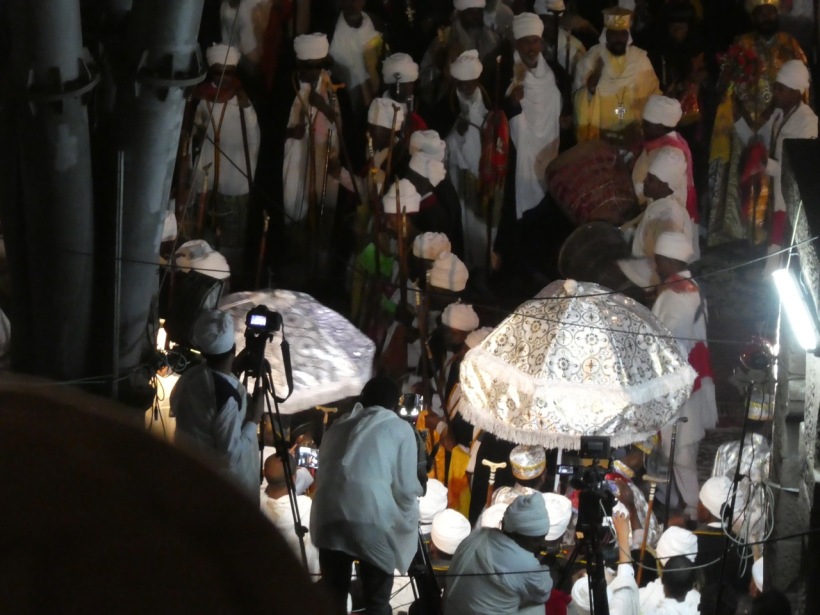 I moved a bit closer and found a space to sit down while I was watching.  The Ethiopian man sitting next to me knew very little english but we were able to communicate how much we were enjoying the celebration. 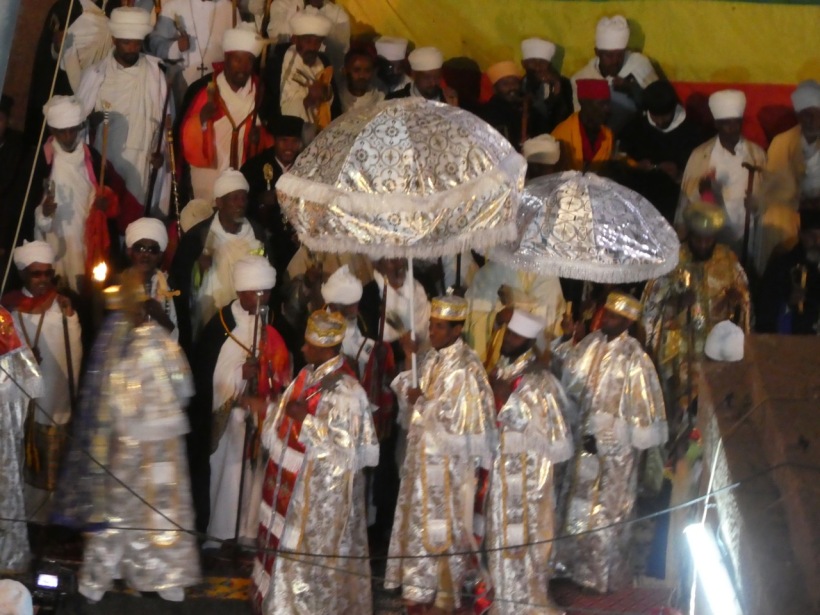 I think I could have stayed for at least another hour or more, but Jane and Sue were standing and really wanted to go back to the hotel.

On the way out I took a photo of these other pilgrims who were watching. 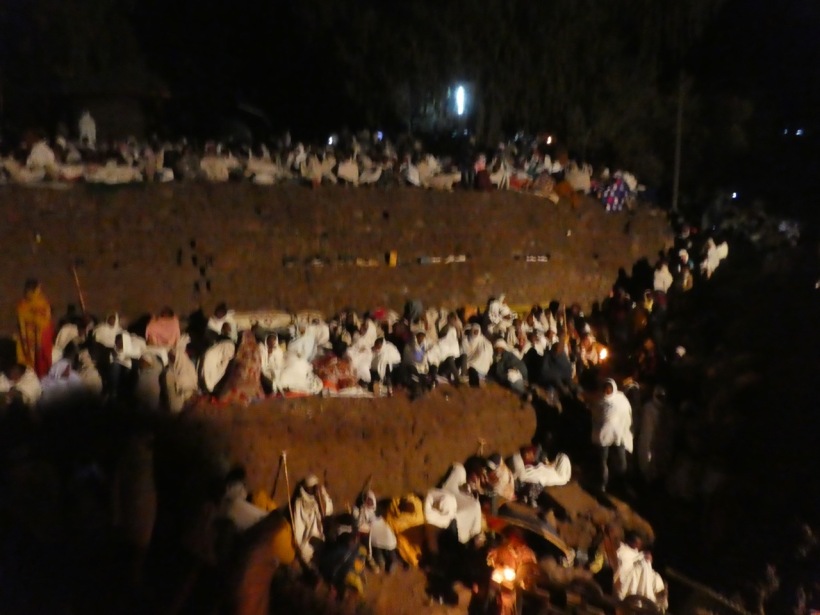 What an amazing experience. Zerdu was a fantastic guide.  I know we could have had much more time to experience and photograph the churches in Lalibela if we had come when it wasn’t so crowded, but I loved the experience of being here with these devoted people.