On our way to the first rock church today we passed through the town of Negash, which is considered to be the earliest Muslim settlement in Africa.  It is said that a just ruler, Ashama ibn Abjar (King Negus) lived at the time of the Prophet. He gave refuge to two groups of Sahabah, companions of the Prophet who migrated there on account of the persecution of the Quraysh in the early days of Islam. Negash is also known for having one of Africa’s oldest mosques, the Negash Amedin Mesqud. Ayu stopped for me to take a photo of the mosque that has been restored. 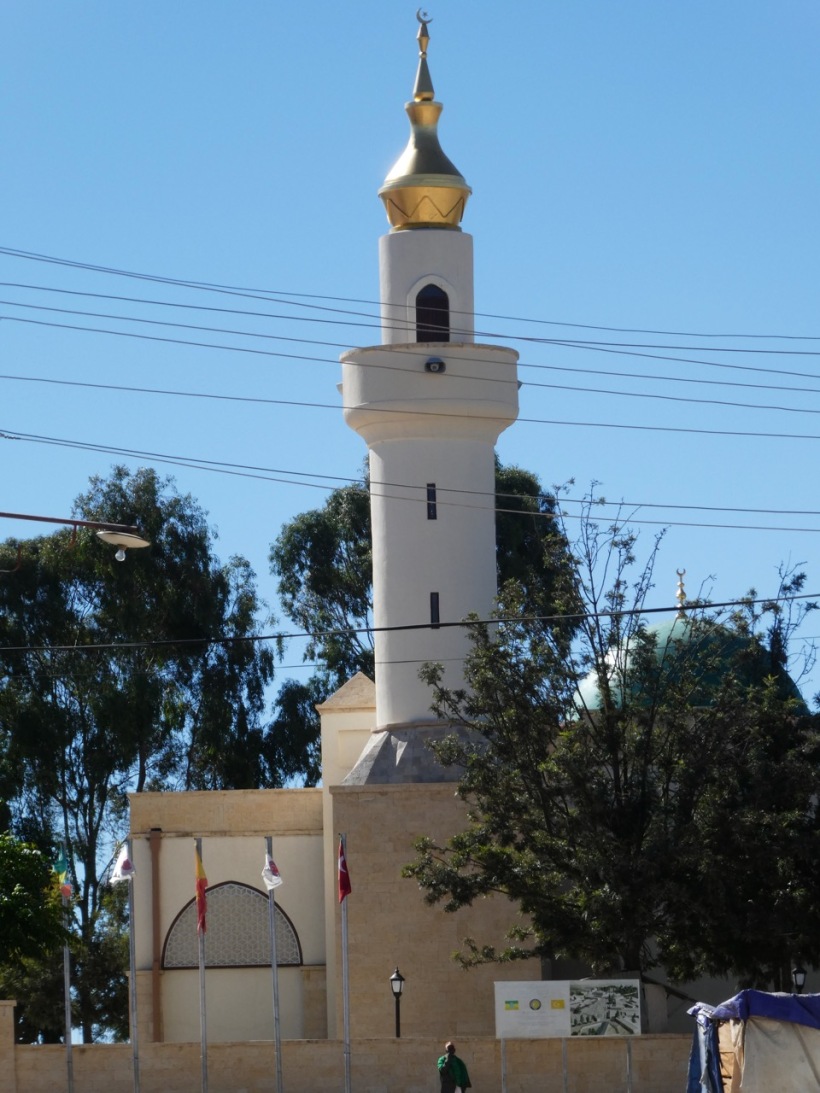 The drive today to Abrehe & Atsbeha church was the roughest so far. We drove up the gravel road that was under constructions. We watched men and women manually picking out rocks from the ground to clear it.  I guess this must be a good way to employ many people, but I wonder if they just do not have the equipment to do that.  There were construction vehicles from China and the U.S. along the side of the road.  We had to keep our windows rolled up because it was so dusty.  I did get a few photos which were easier to take on our way back down. 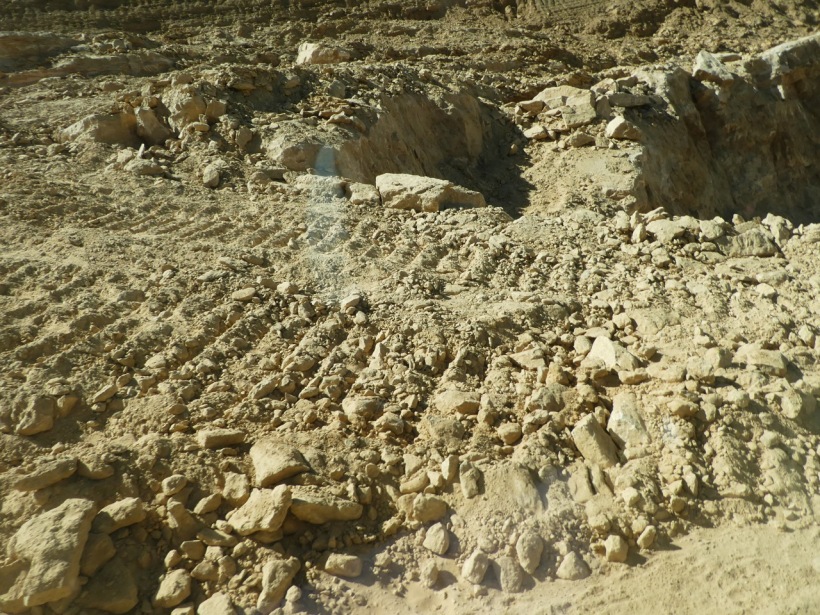 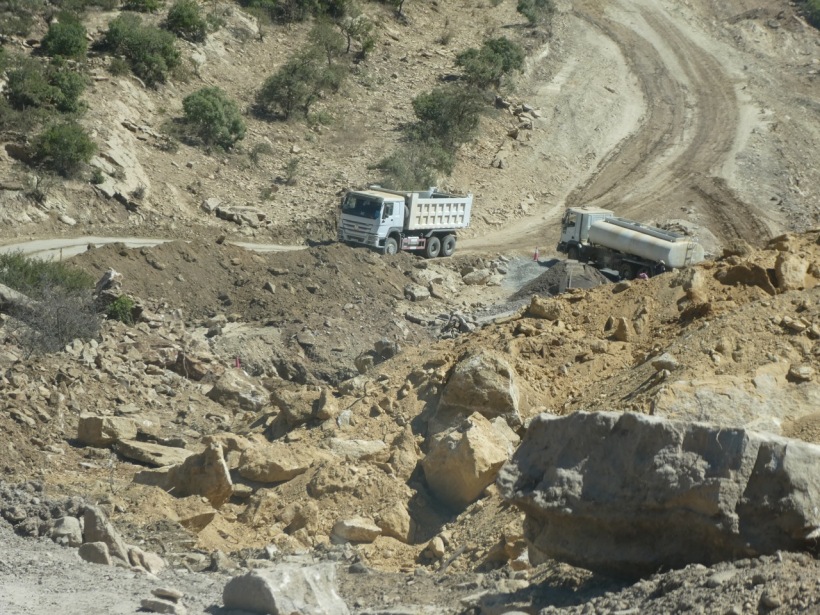 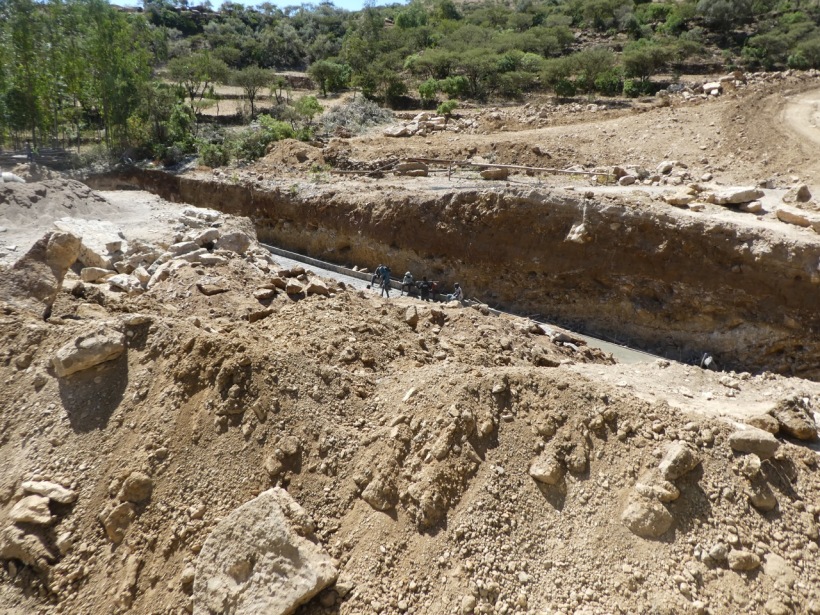 Ayu is such an excellent driver.  He maneuvered our jeep around all of the debris and got us to the church. 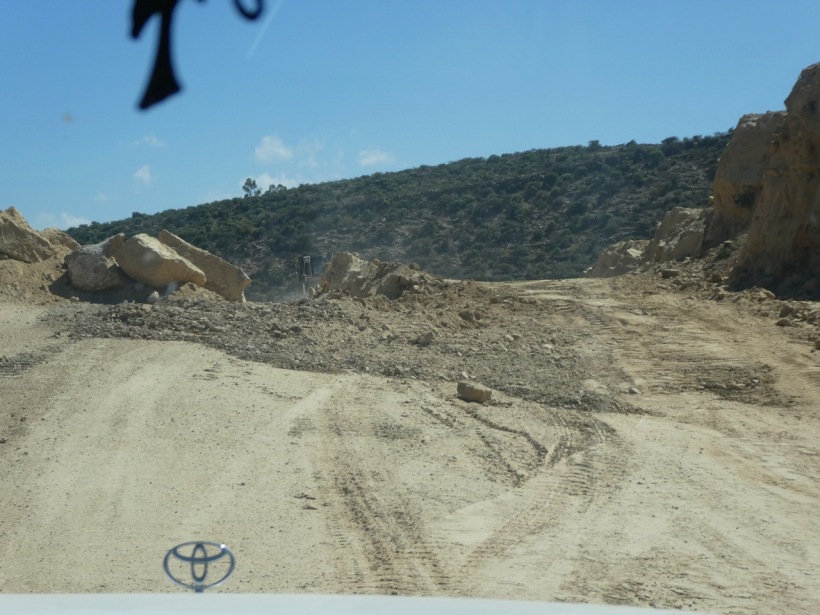 Now for the important part – the rock church.

The church of Abreha and Atsbeha is one of the oldest and best-known rock-hewn churches in Tigray. It is a semi-monolithic rock-hewn church that was carved out of the side of the mountain and excavated in one piece.  Abreha and Atsbeha were twin brothers who converted to Christianity. According to local tradition, this church was chiseled out of the mountainside between 335 AD and 340 AD by the twins. I read that their father was Tazer and their mother was Sofia (Ahyewa). They were born on December 27, 320 and they were taught by the Axum’s arch priest, Inbrem. They learned Christianity from a babysitter. Their father died when they were 12 years old and they took the throne together.

We walked up these steps to the church. 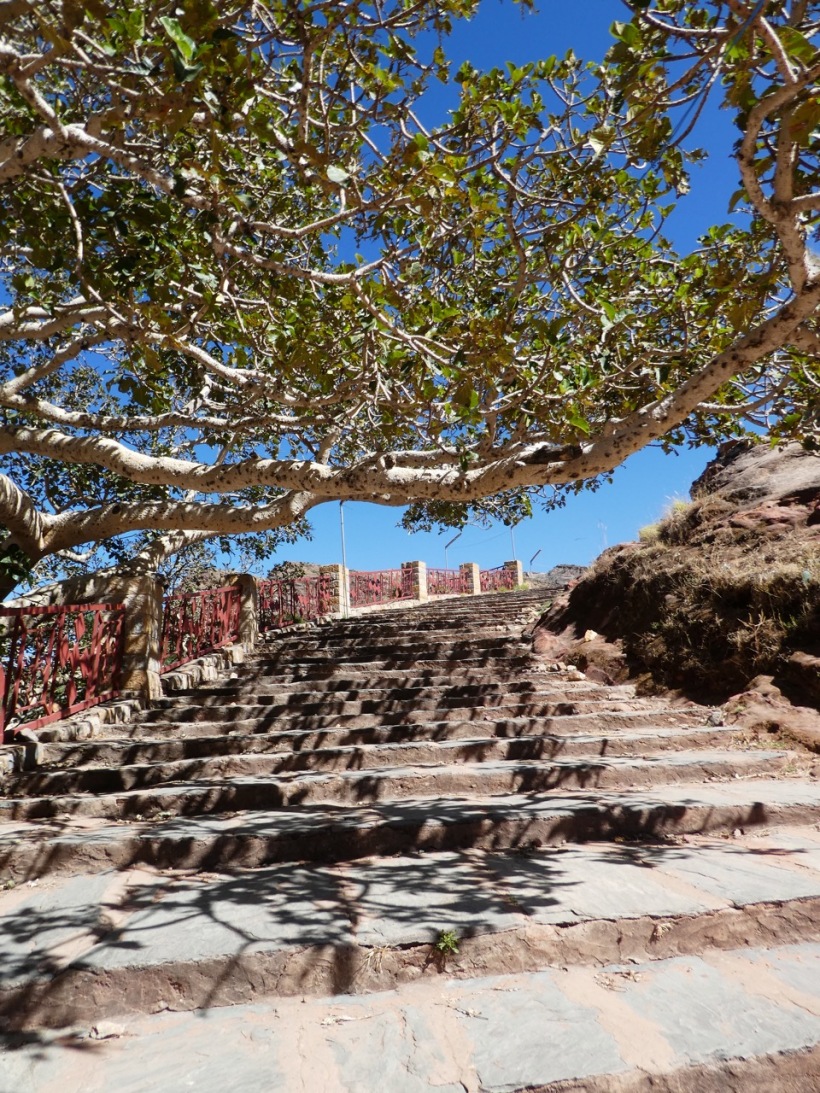 There is a graveyard around the church and this is one of the markers. 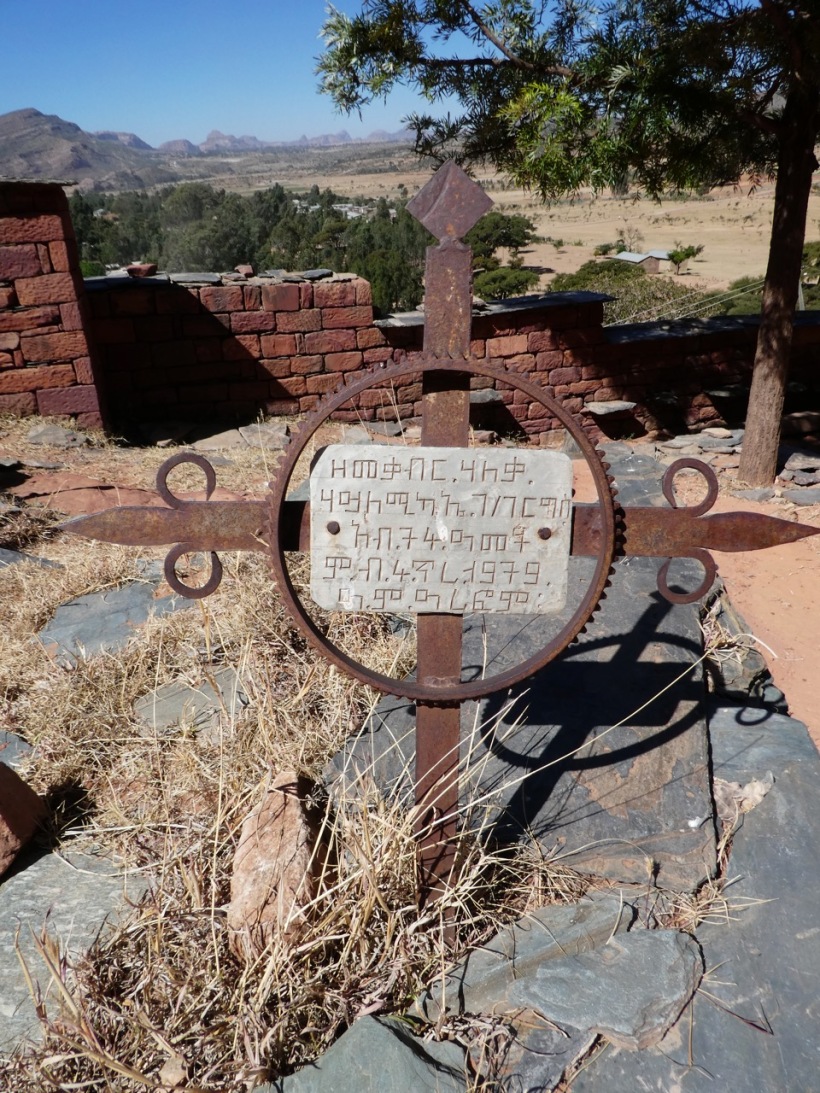 We saw a depiction of the twins on the wall. 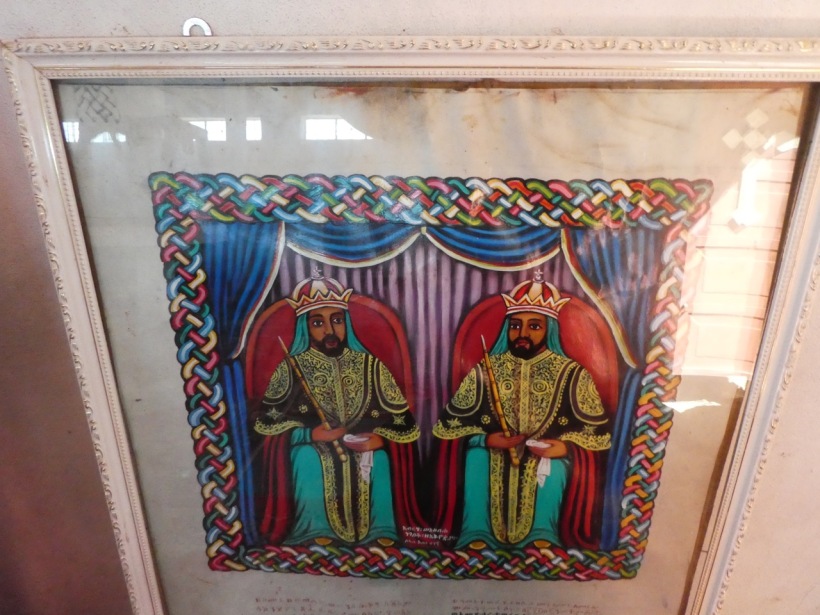 I took some photos inside the church. 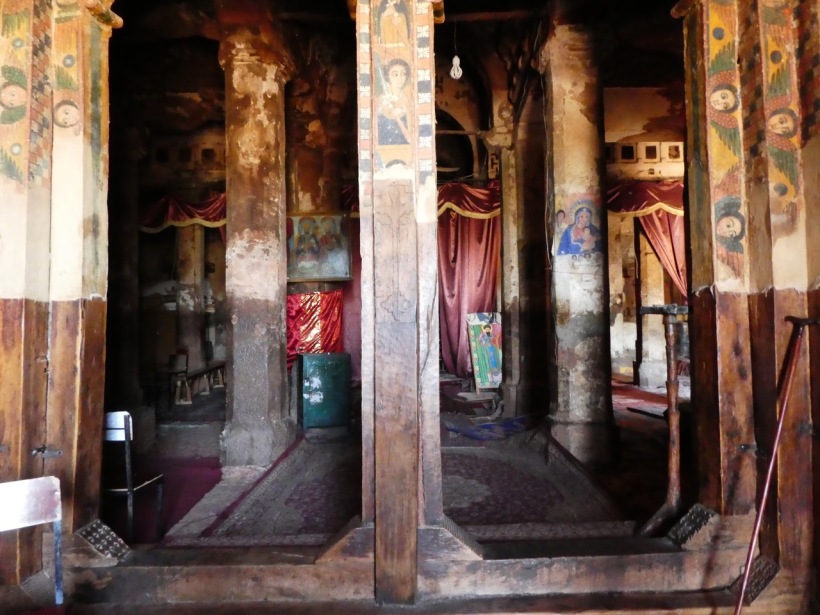 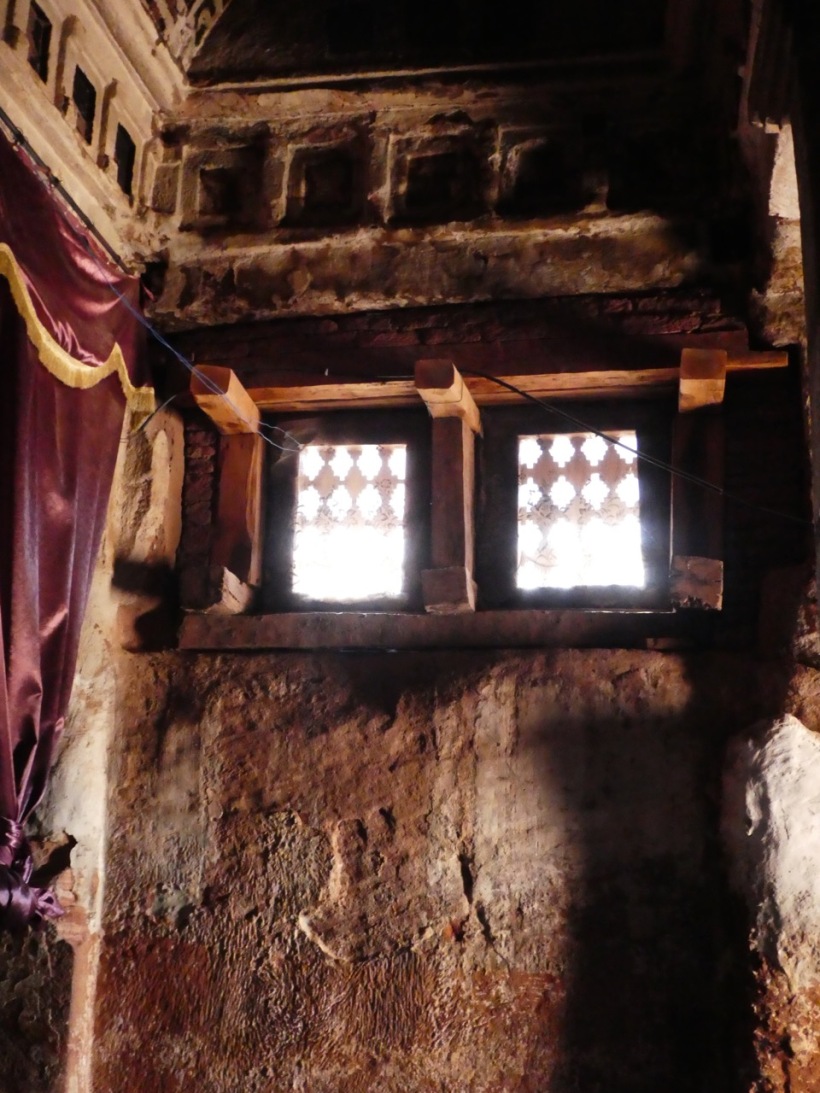 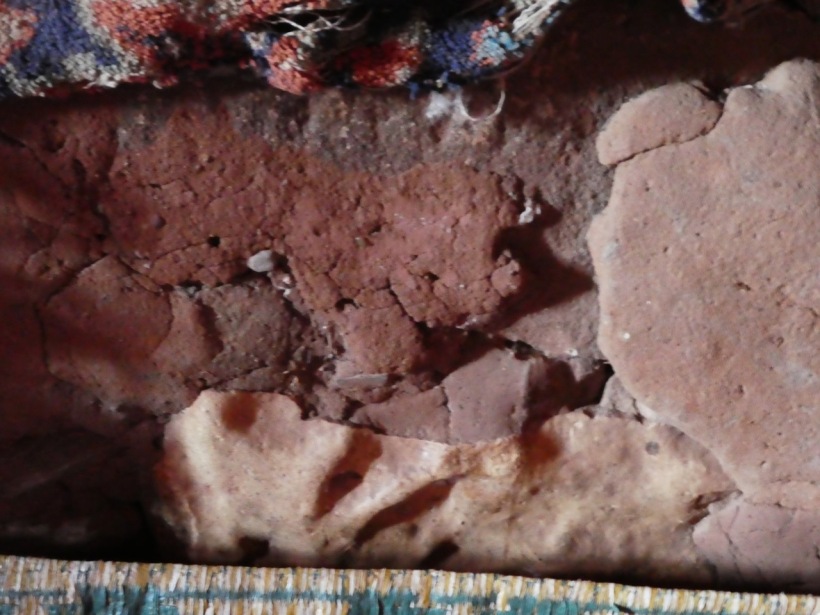 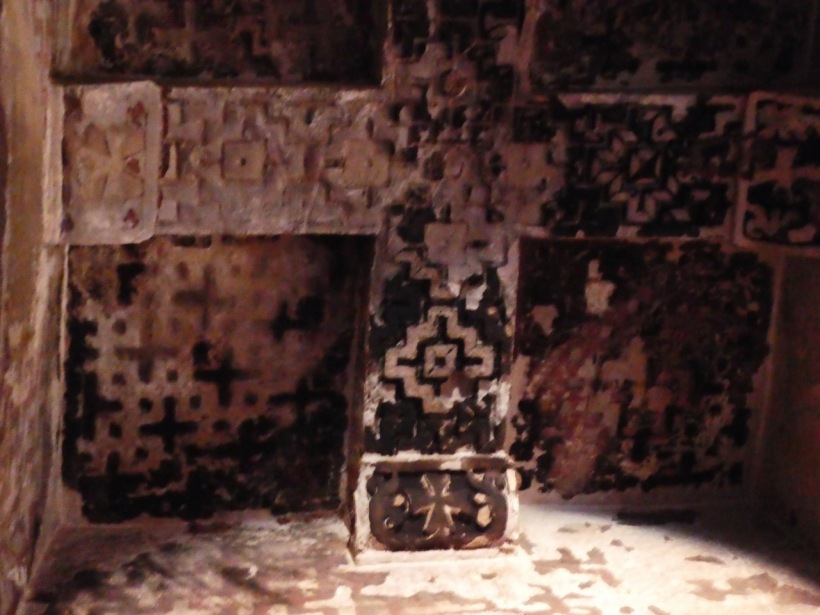 This is looking at the ceiling.  You can see the charred black on the ceiling.  Parts of it were blackened in a fire. Attempts were made to destroy most of the churches of Tigray by the Falasha Queen Yodit who (as the story is told) met an unpleasant end due to divine retribution as a result. 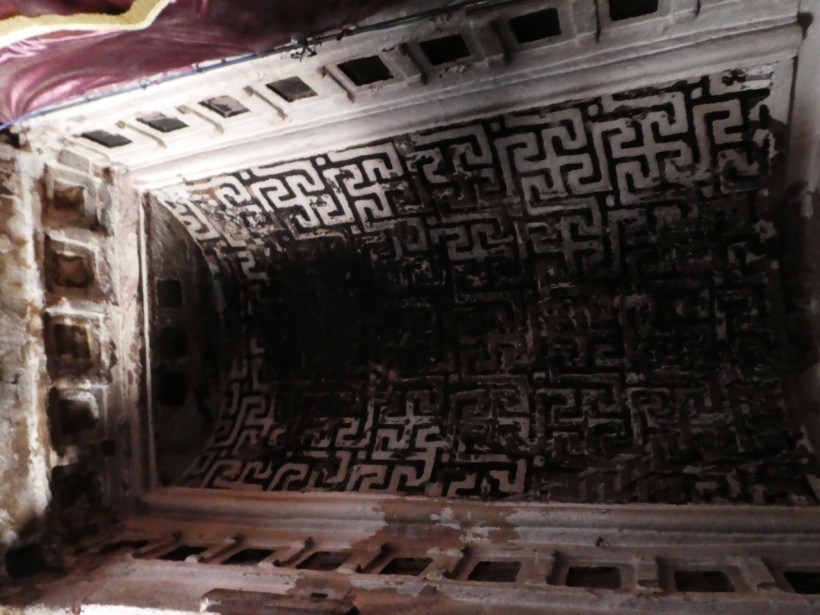 I love these wooden doors. 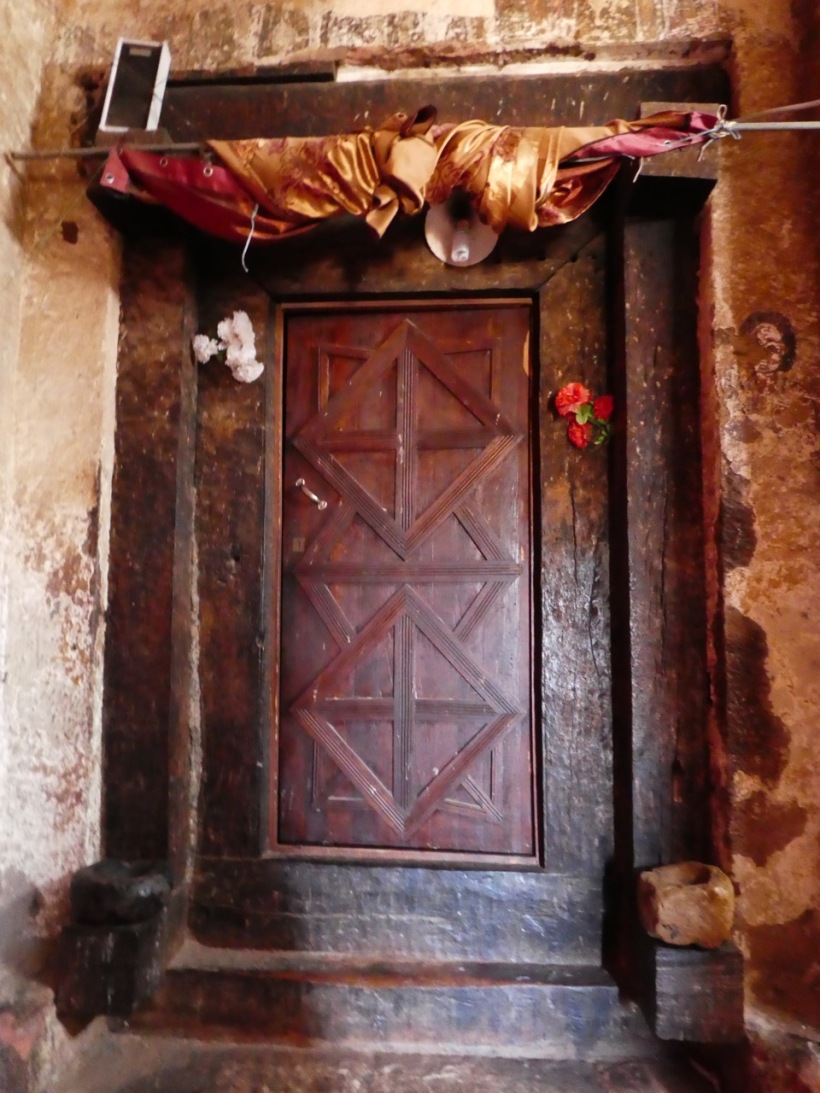 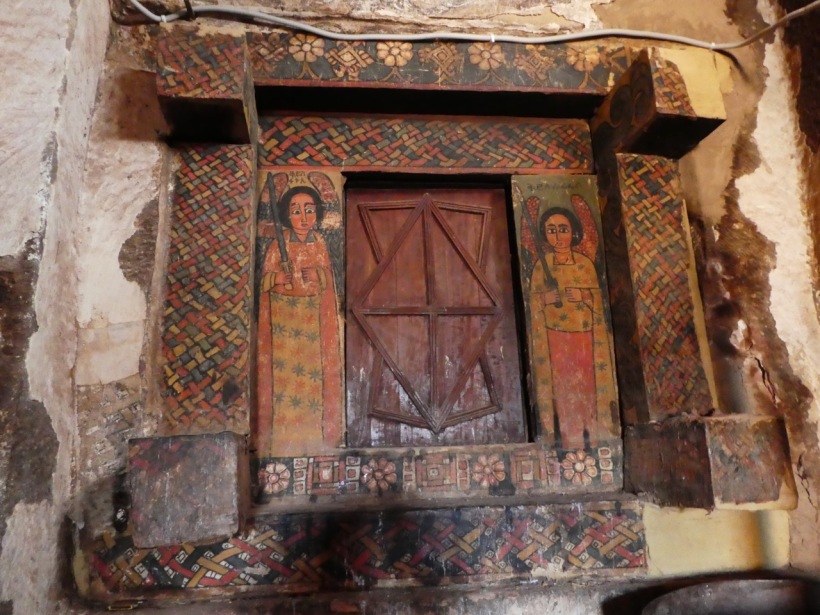 The original rock wall can be seen  in this photo. 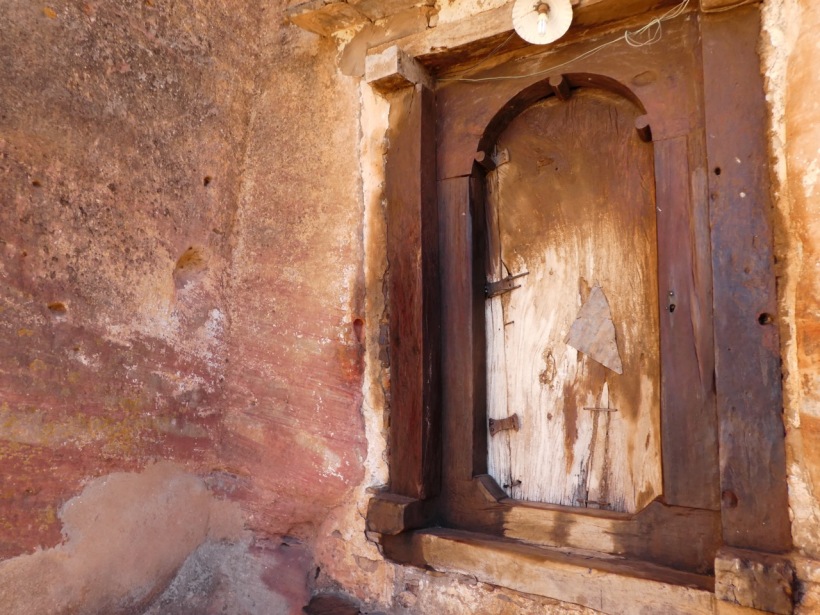 We walked around the back of the church to see more of the rock. 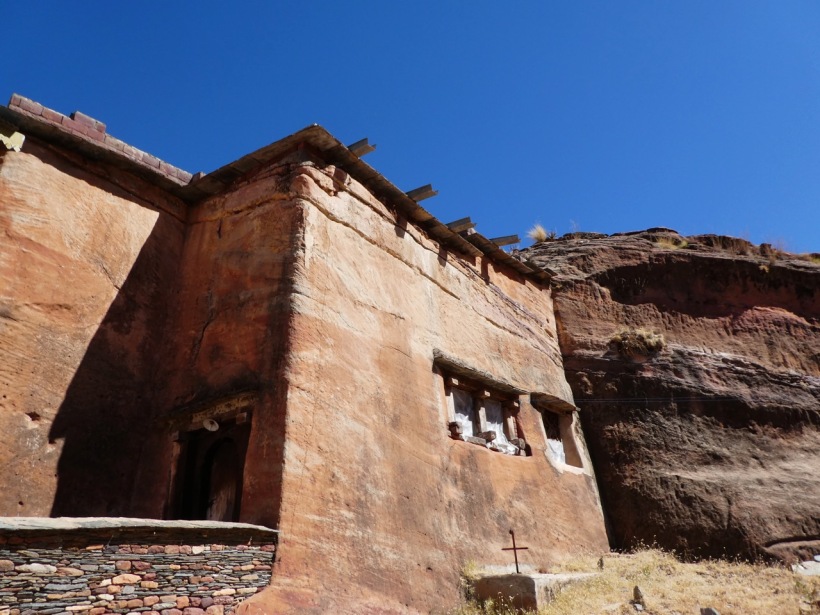 It is important to remember that all of the “open space” within the church was carved away, bit by bit, to leave the pillars, the ceiling, the walls of this church as a single piece.  It was quite amazing.

The views looking down from the church grounds are quite beautiful. 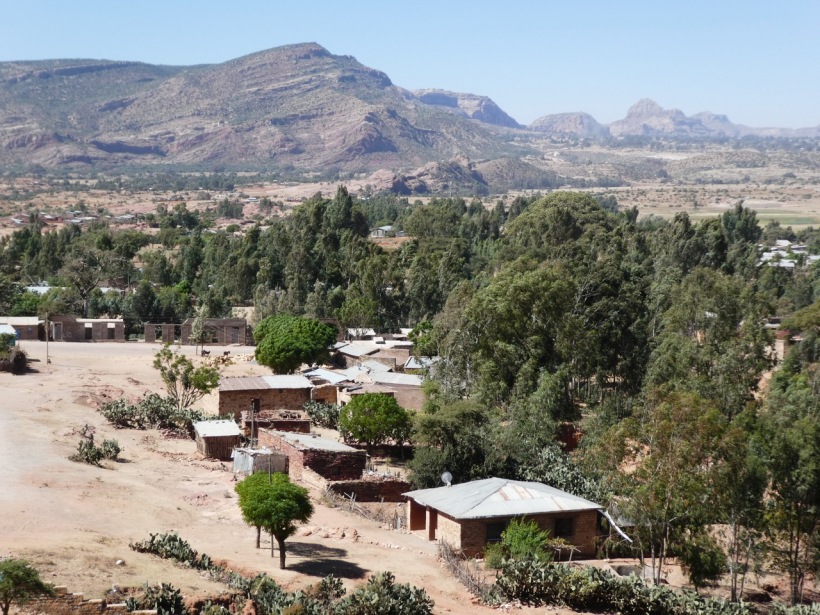 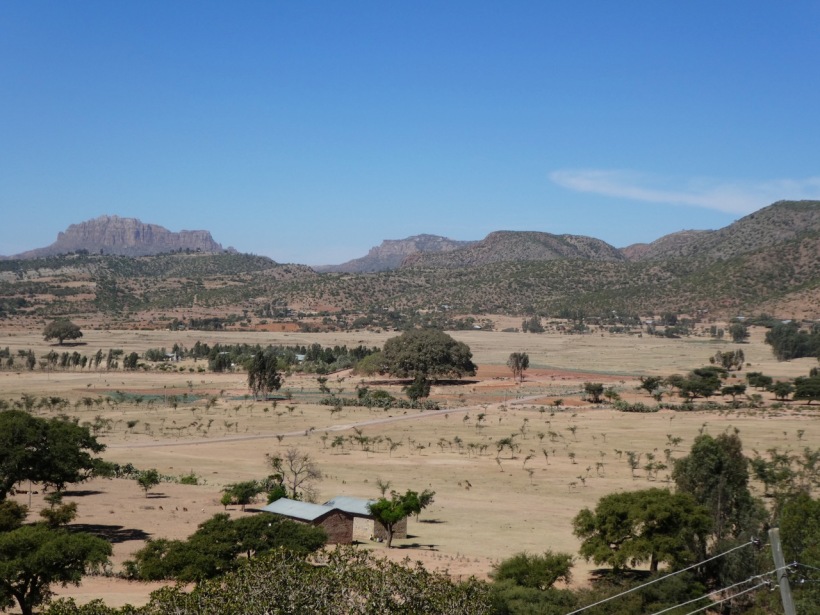 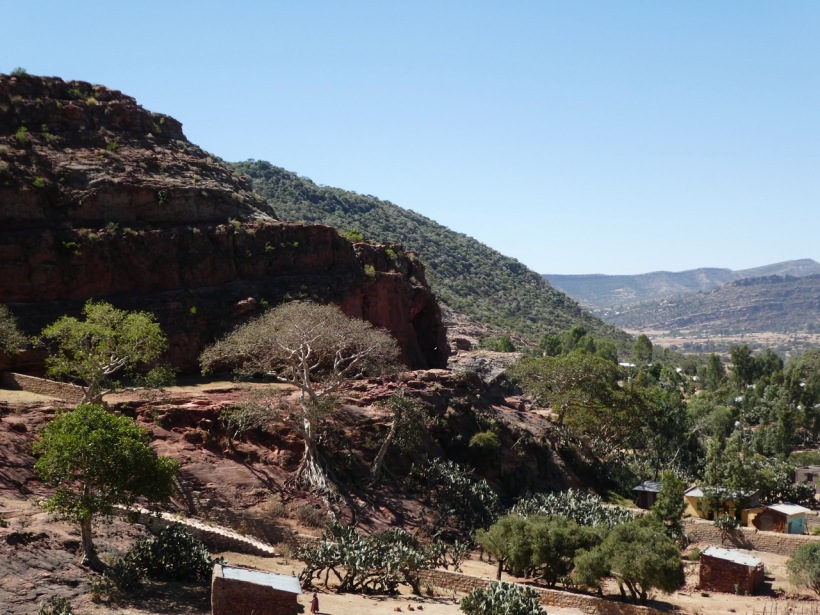 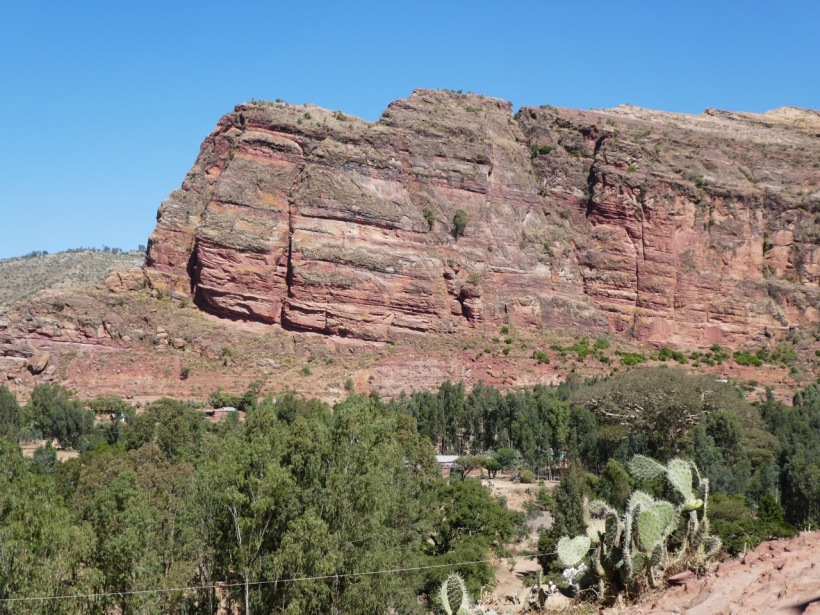 After making it back down through the road construction, we went out to lunch in Cherkos. We had a good laugh when a woman from a group of Australian women came up to us to ask us if we were nuns. They said that they had seen my chalice necklace and wondered what order of nuns it represented.  We chatted with them for a while.

Then we visited another semi-rock-hewn church called Wekro Cherkos.  It is a monolithic rock-hewn church. Some believe that it was constructed during the reign of Abreha and Atsbeha. Others have dated the construction to between AD 700 and 1000. The layout of the church is generally described as cruciform or cross in square. This church may have been dedicated to the child martyr, Cyricus of Tarsus.  Cyricus was a young boy when he and his mother were killed in Rome in the 4th century AD. 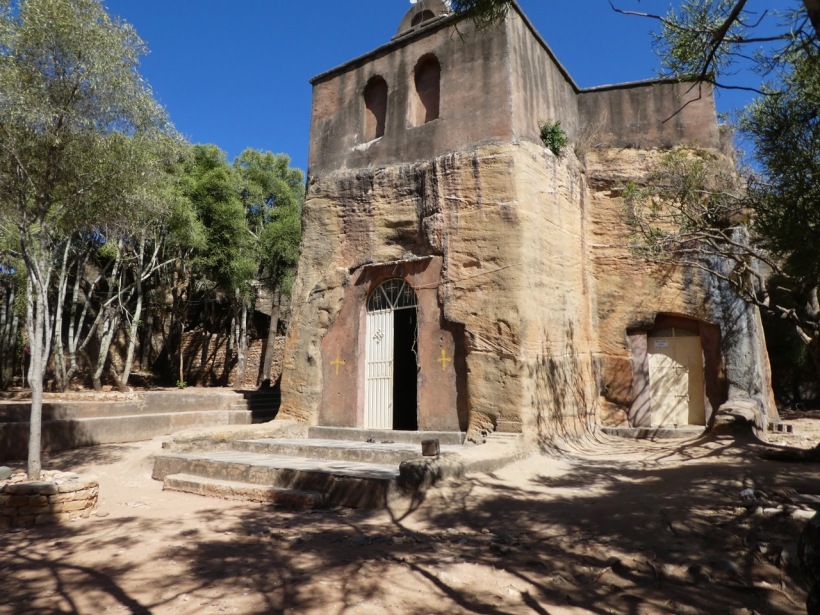 I read that In 1958 Haile Selassie himself, apparently, ordered the angular roof squared with concrete for either aesthetic reasons or to protect the church from water seepage (which has severely damaged the geometric ceiling designs).

There was a priest in this church who brought out a special cross. 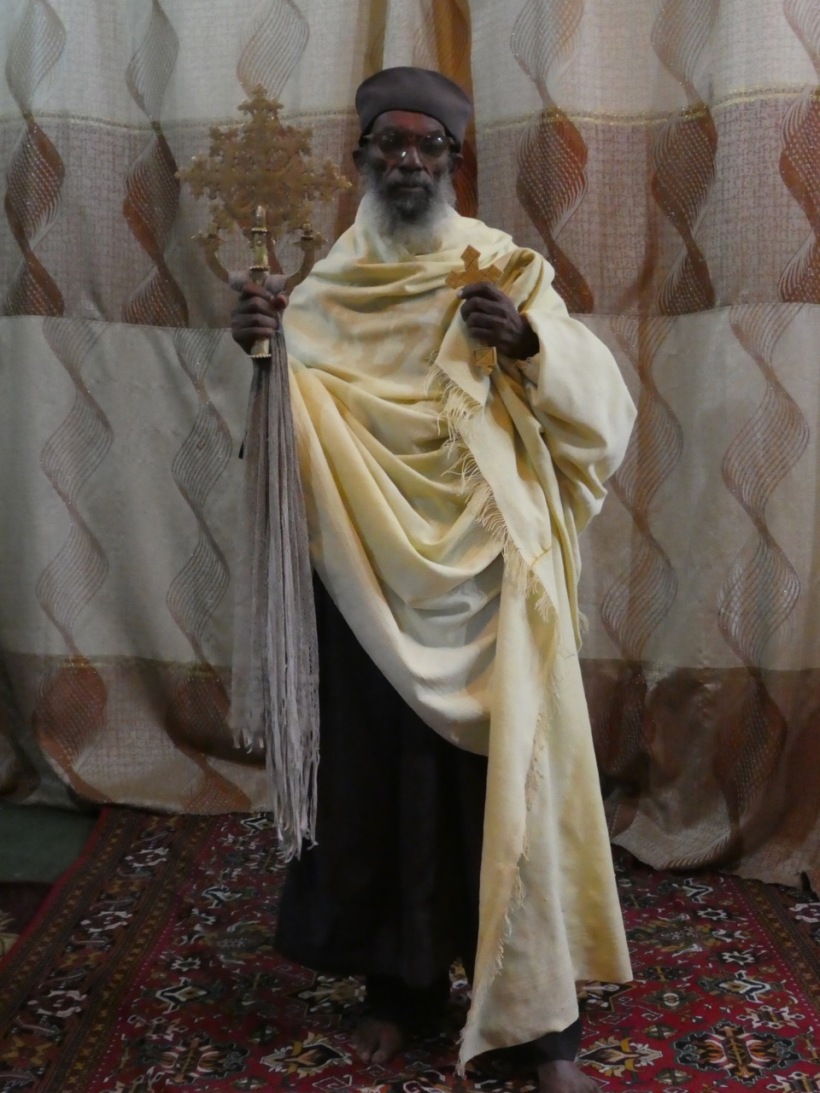 Both Ayu and our guide asked to be blessed by the priest. 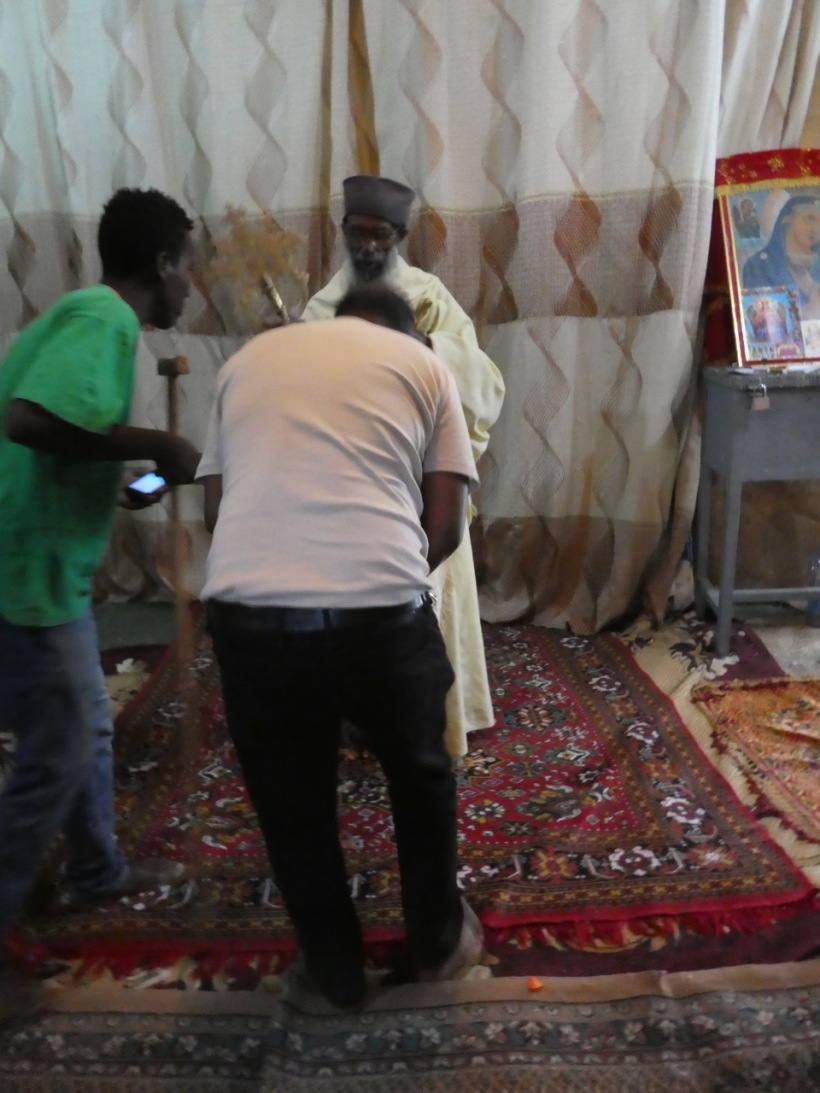 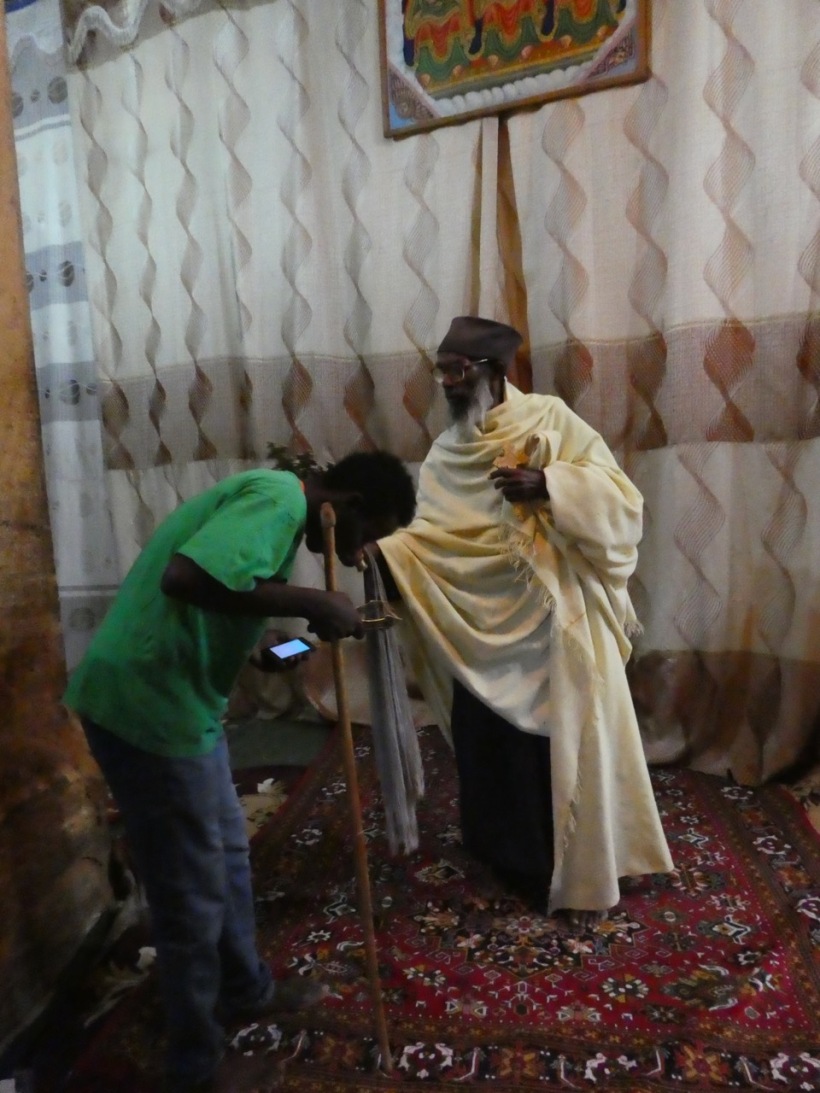 When you look at the following photos you can see charred black. 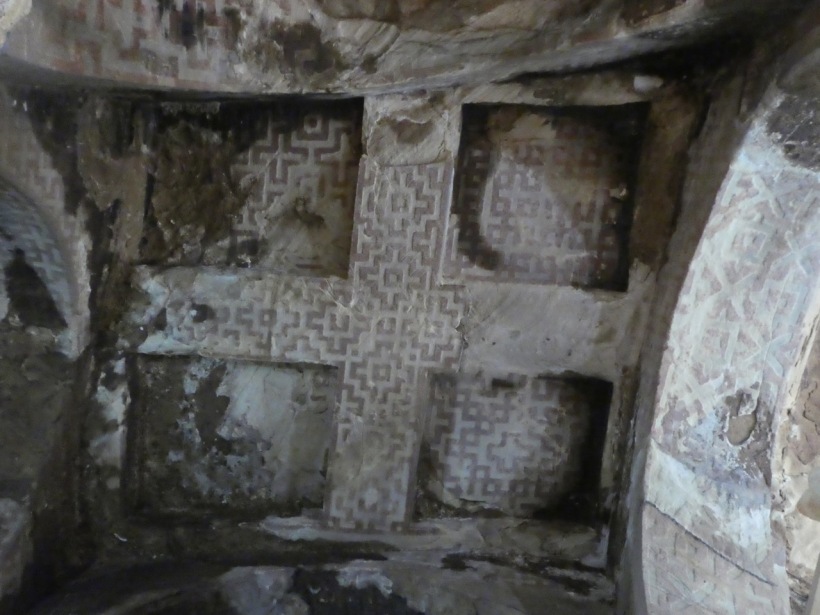 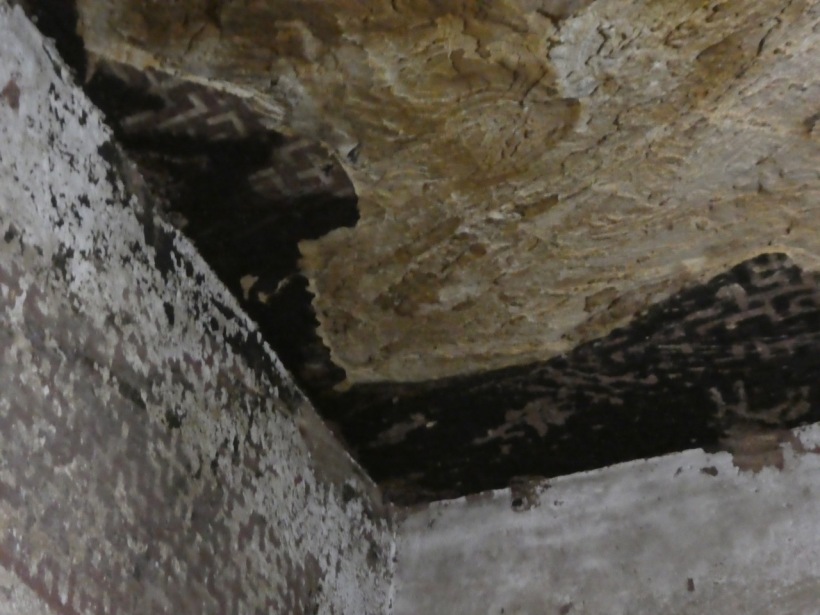 It is said that this church had also been burned by Gudit (Ge’ez ጉዲት, Judith). This is the information I found about Gudit.  It is well-known from relatively recent Ethiopic tradition that Ethiopia was once ruled by a queen called Gudit (Yodit, Isat or Gaՙwa) who had both positive and negative characteristics. On the one hand she was a beautiful woman of the Ethiopian royal family, much like the Queen of Sheba, and on the other she was a despicable prostitute who, at a time of political weakness, killed the Ethiopian king, captured the throne, and as a cruel ruler destroyed Aksum, the capital, persecuted the priests, and closed the churches.  There are varying accounts of her ethnicity.  Some accounts list her as non-Christian.  Others claim that she had converted to Judaism after marrying a Jewish man.  Still others say she was pagan.  I could not find a way to verify this information.

We arrived at the Planet Hotel in Mek’ele which is the capital of the Tigray region.  This hotel has a sauna and swimming pool.  I discovered that my bathing suit was still in the jeep because I had stored it in Leigh’s suitcase..  So I sent a message to Habtu to see if Ayu could bring it back to me.  He called Ayu who generously drove back to the hotel with my suit.

After dinner I went to the sauna and steam room.  There were two Ethiopian woman there with me.  One of them brought me a cream to put on my face.  She called it a mask.  It was to protect my skin.  I had a great time.  The moisture from the steam room was so good for me in this super dry climate.

It is now 1:23 am in Ethiopia and I am so happy that I am all caught up blogging.