Today was a extremely full day – visiting many sites in Axum. I hope the information in this post is at least mostly correct. I used what our guide, Rafael, told us and information from several different internet sites.

Aksum was once the center of a great empire and the seat of learning for the ancient Ge’ez language and literature. This capital city was the first place in Ethiopia to adopt a new religion — Christianity.

After breakfast Ayu drove us to Northern Stelae Park, which was recognized as a UNESCO site in 1989.

The second largest stelae (recently returned from Rome in 2005 after being stolen during Italy’s occupation of Ethiopia in 1937) stands 78 ¾ feet high. It is estimated to weigh 170 tons. They believe it had also fallen because it was returned in 3 parts. The Ethiopians put it back together and restored it. 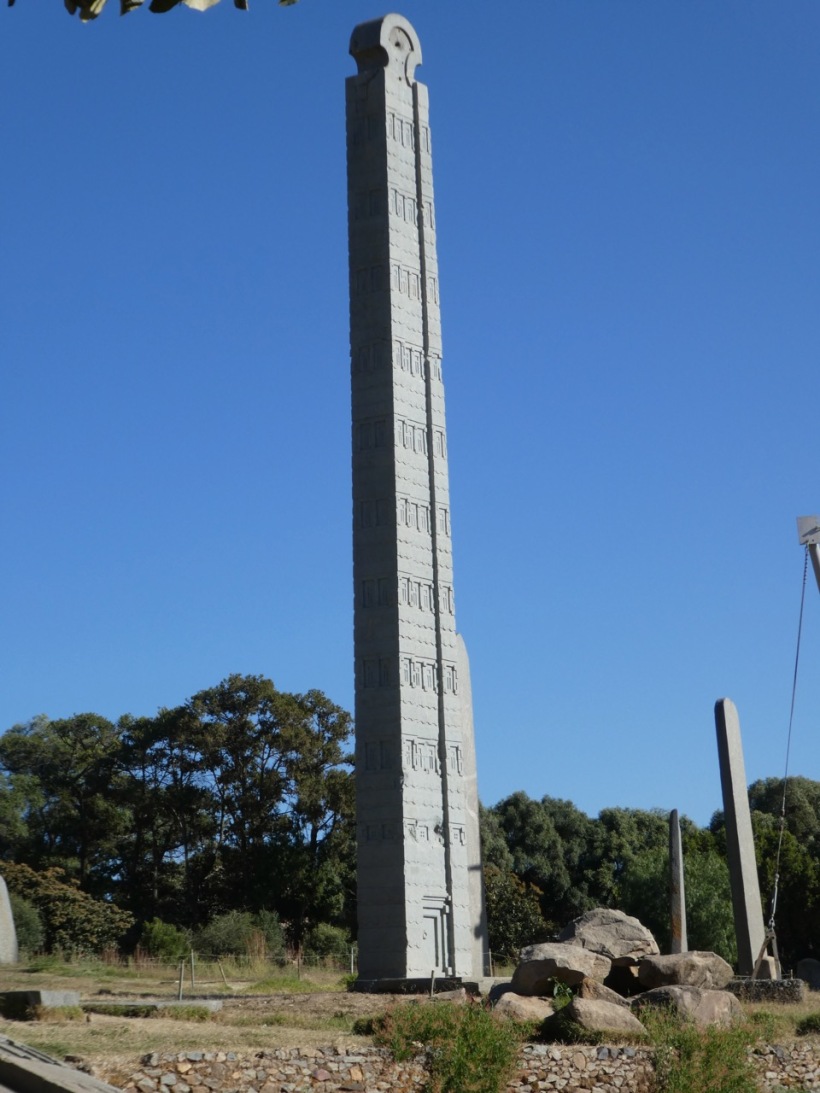 The third stelae is about 75 feet high and weighs about 160 tons. The Ethiopian has built supports around this one to protect it.

Seeing the largest stelae on the ground allowed us to get a close-up of the carvings. 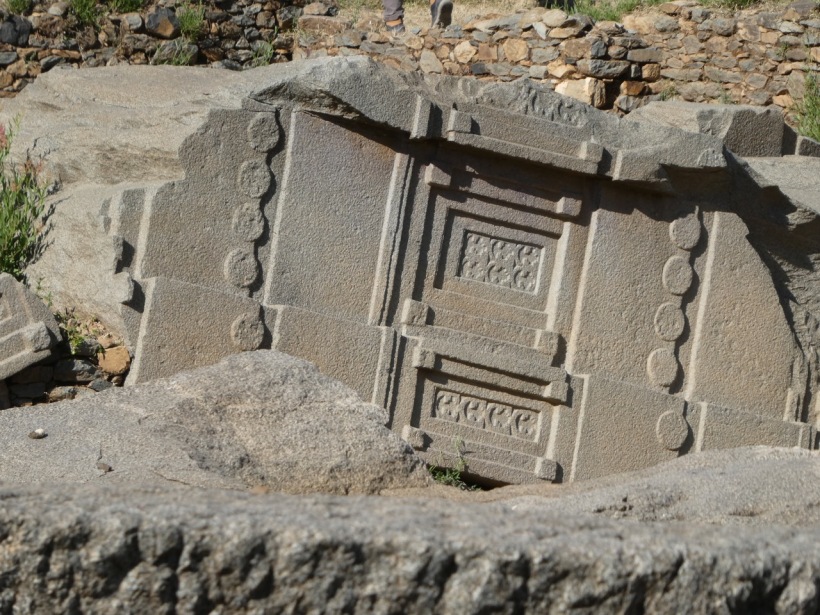 The first 2 stelae were carved on all 4 sides. The 3rd one is only carved on 3 sides. Perhaps a decision was made to raise it before the 3rd side was carved because it was easier than rolling it over to carve the 4th side.

Amazingly it is believed that these humongous pieces of stone were transported to this area on giant logs and pulled at least 5 km by elephants to this site.

At the apex of each stelae is a carved semi-circular shape – perhaps symbolizing the heavens. Scholars believe a metal plate with the image of the sun engraved inside a crescent moon was affixed to the front of these top semi-circles. 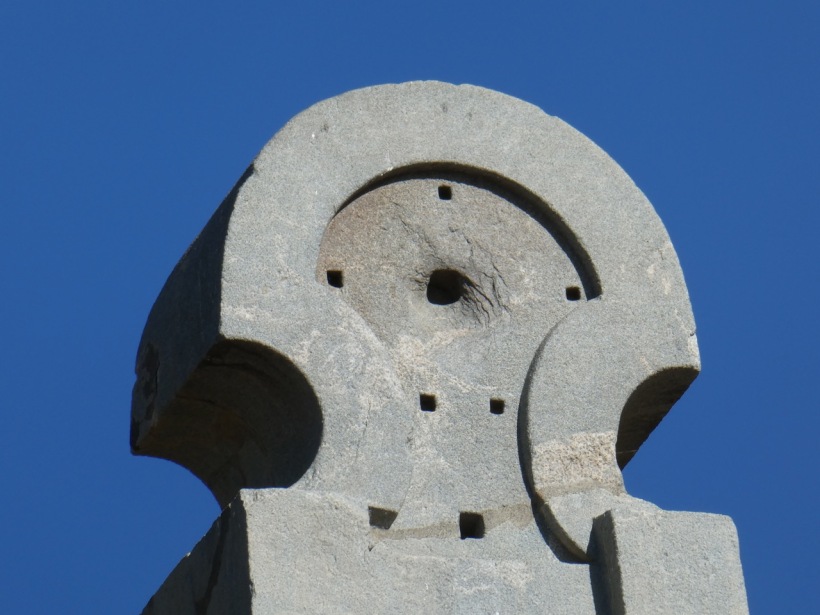 Here are some photos of the carvings on the stelae.

We also saw the False Door Tomb that was buried until 1972. 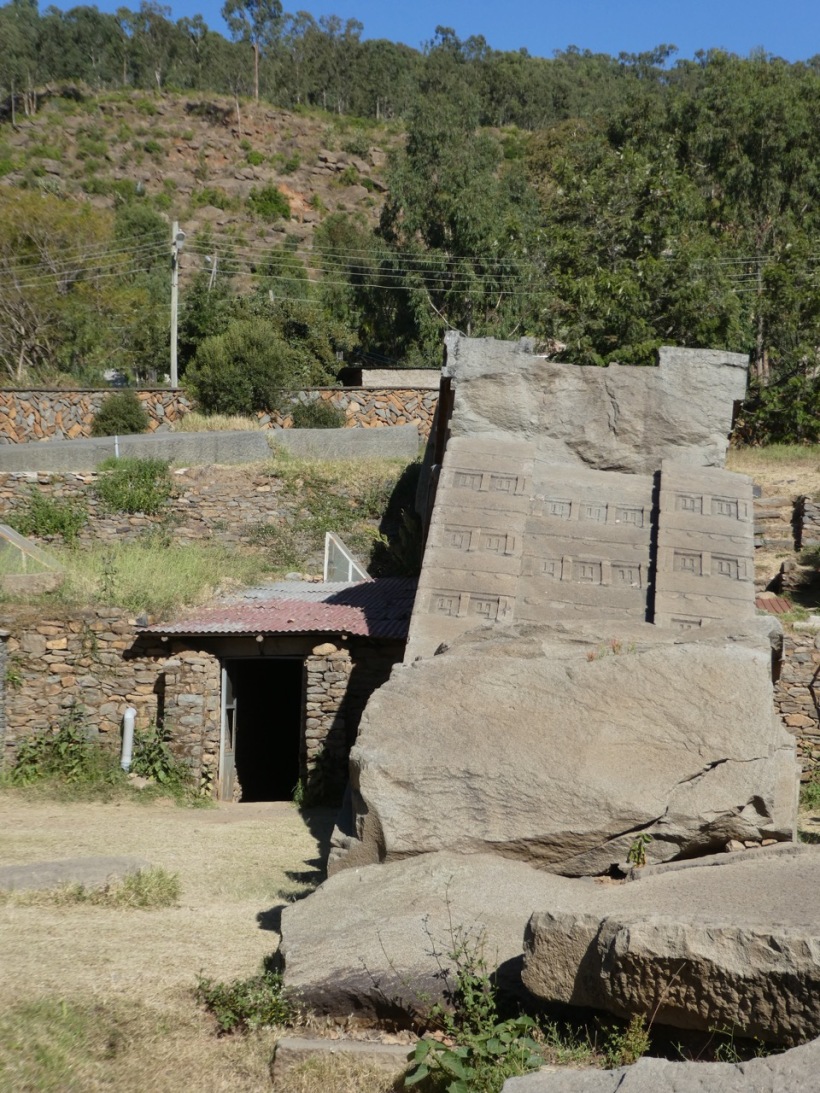 The tomb underneath the slab was covered until 1994 and it is believed that it dates back to the 4th century AD.

We descended into the tomb’s chamber on a stone staircase. 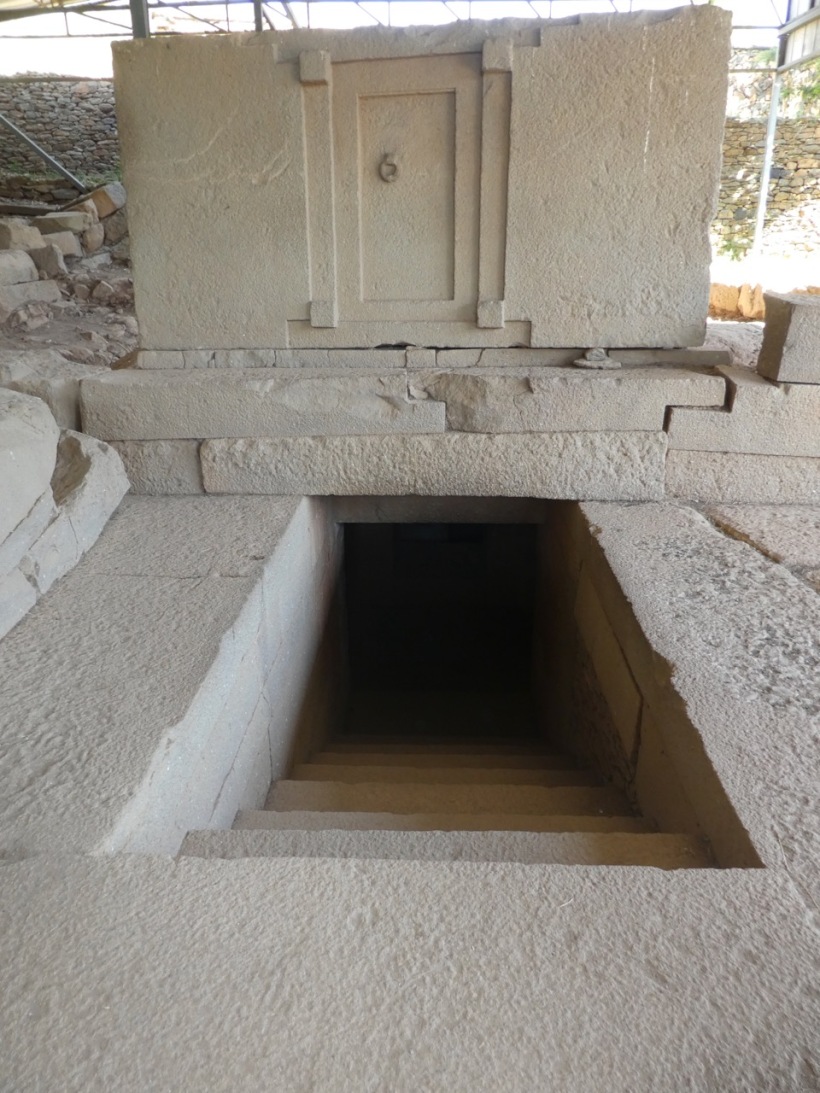 I took a close up photo of the false door at the top of the staircase.

Here we are at the bottom of the staircase waiting our turn to enter the actual tomb. 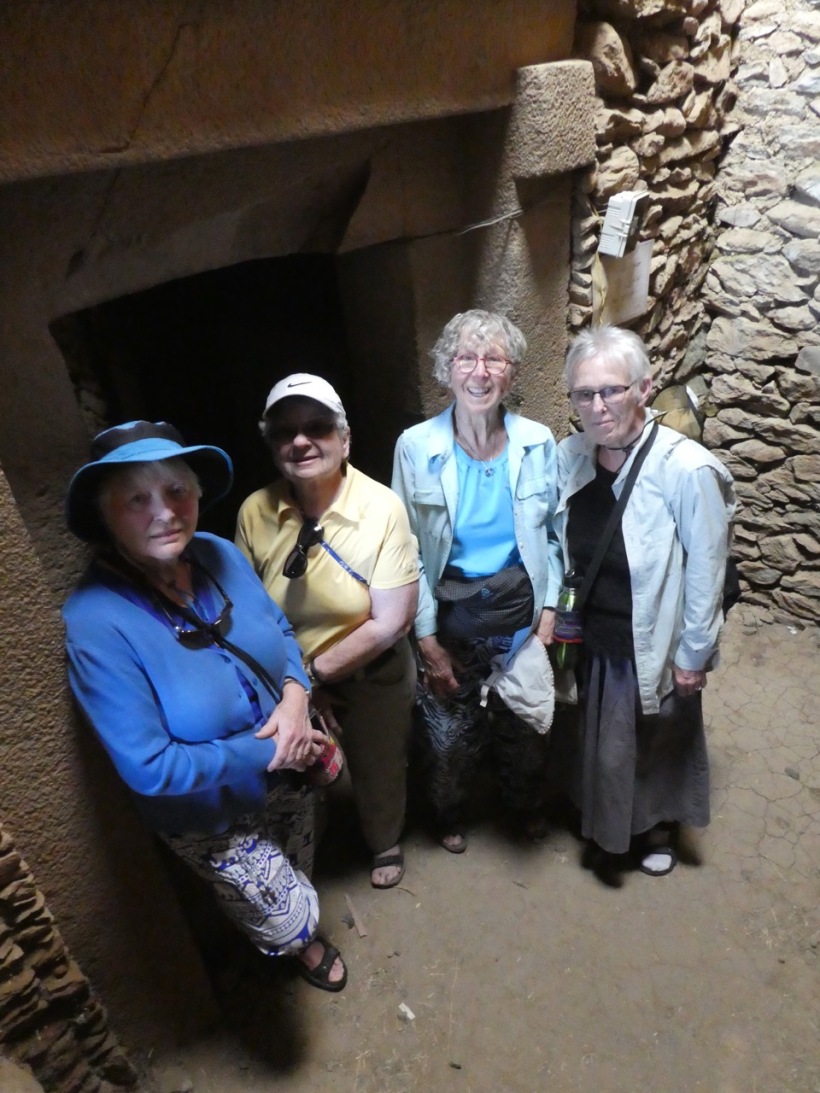 Rafael told us that by the 2nd century the Aksum started to melt metal clamps. 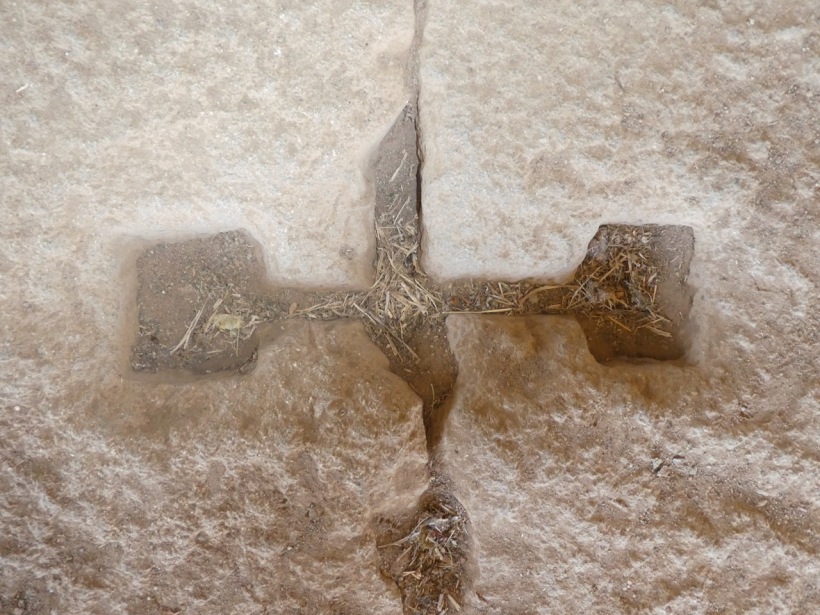 The base of the tomb is a special stone called phoneolite. It is a solid piece of stone that has a sound when you strike it.

This carved out stone in the tomb actually functions like a skylight.

Rafael showed us a stone that had evenly spaced marks on it. This stone had been used for measuring other stones before they were cut. 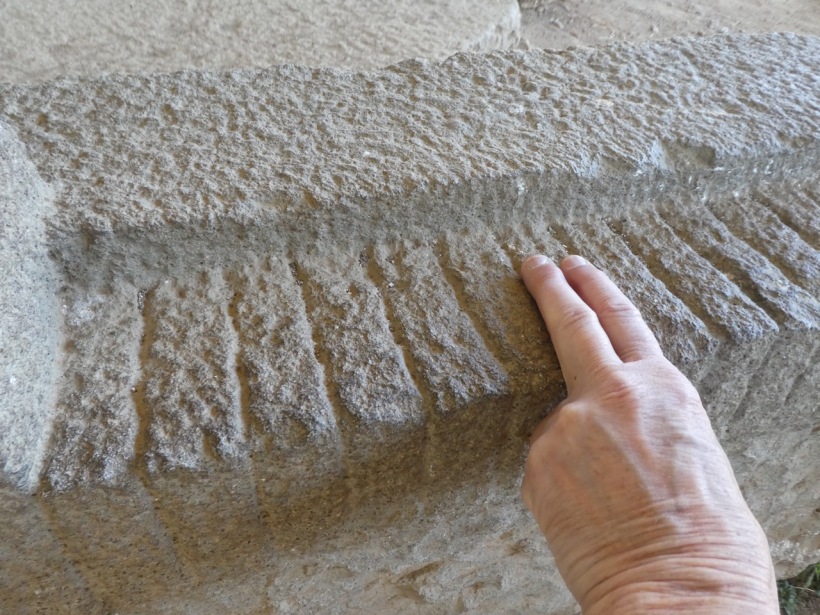 This is an example of a small rough stelae without any carvings.

After our tour we stopped for Leigh to get a cup of coffee. This little girl was helping her mom grind the coffee.

Then we went to St. Mary of Zion Church.   It has historic roots back to the 4th century when King Ezana promoted Christianity. The first Church of St. Mary was built in the 300s AD.  I read that the original church had actually been destroyed and rebuilt at least twice. Its first putative destruction occurred at the hands of Queen Gudit during the 10th century. Its second, confirmed, destruction occurred in the 16th century at the hands of Amad Ibn Ibrihim al-Ghazi.  It was then rebuilt by the Emperor Gelawdewas and then finally rebuilt and enlarged on the ruins of the church that had been destroyed by Emperor Fasilides 1635.  St. Mary of Zion was the traditional place where Ethiopian Emperors came to be crowned. And indeed, if an Emperor was not crowned at Axum, or did not at least have his coronation ratified by a special service at St. Mary of Zion, he could not be referred to by the title of “Atse”.

In 1955 Emperor Haile Selassie founded the new Church of St. Mary of Zion next to the old one and it was completed in 1964. Unlike the original St. Mary of Zion, the new church allows entrance to women.

We took off our shoes, put scarves over our heads, and entered the church. 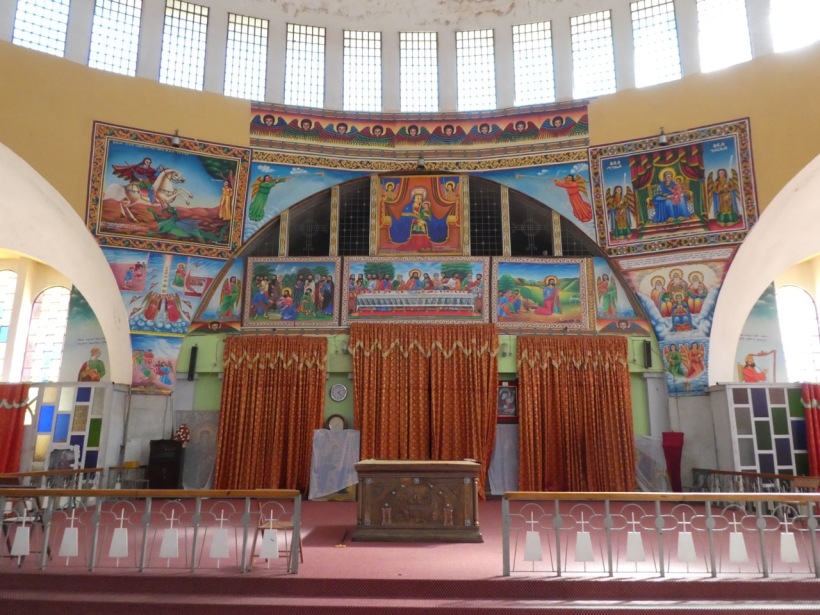 A monk unwrapped the book with drawings for us to see. 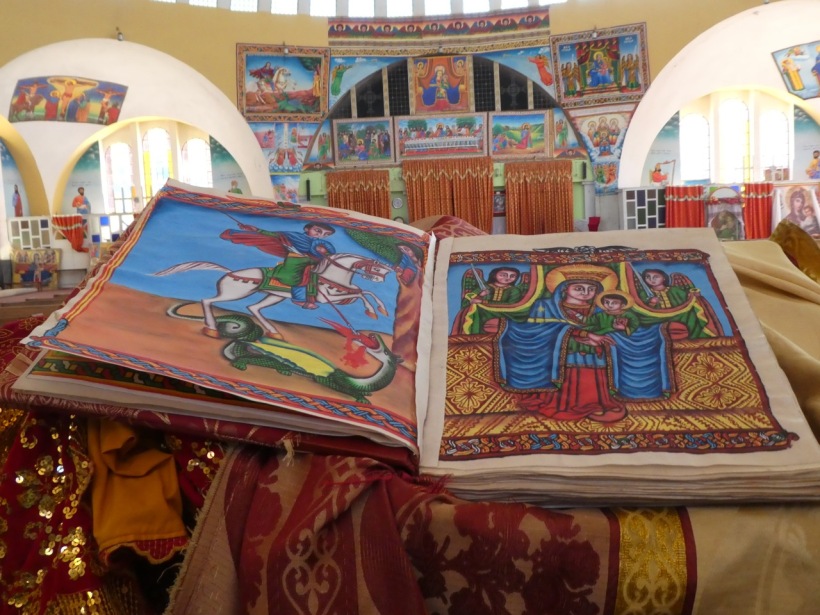 This chandelier was given to the church by Elizabeth II.

November 29th each year is the celebration of Santa Maria. Hundreds of thousands of people come to Aksum to this church because the original Arch of the Covenant is kept in the nearby church.

There were women in the church and around the church. Many of them had come here to pray. 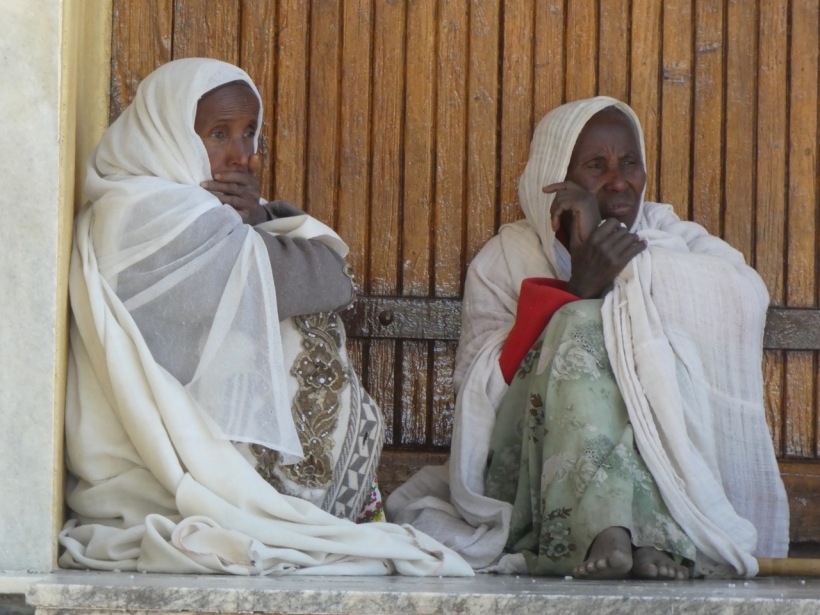 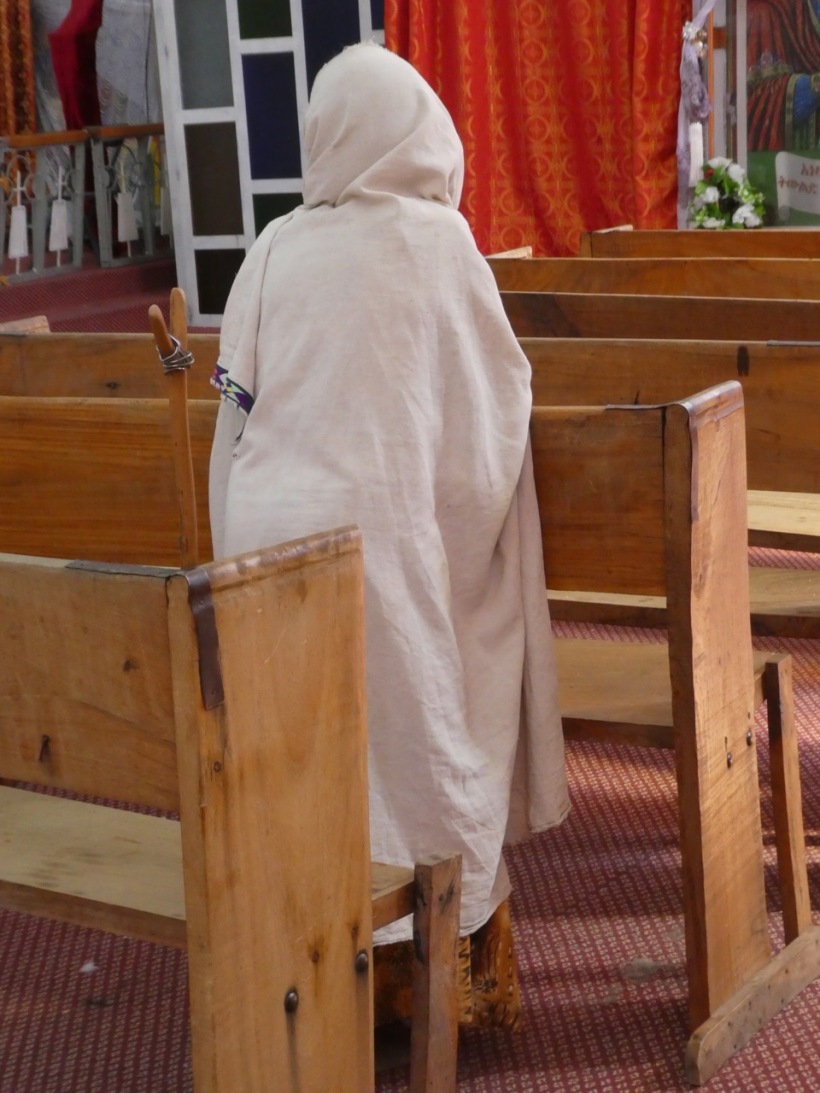 Reportedly, the Ark was moved to the Chapel of the Tablet adjacent to the old church because a divine ‘heat’ from the Tablets had cracked the stones of its previous sanctum. Emperor Haile Selassie’s wife, Empress Menen, paid for the construction of the new chapel. Some sites say a specially chosen priest stays in the church to guard the Arch and even he is not allowed to ever see it. Other sites say that the Arc is guarded by a select group of monks whose sole commitment is to protect it.

Some time ago somebody tried to get into the Chapel so it is now surrounded by barbed wire fence. We saw some men praying in the front of the building but outside of the fence. No foreigners are allowed to even approach the fence in front of the building.  There is a ravine between St. Mary of Zion Church and The Chapel of the Tablet.

Rafael took us through the Aksum Museum near the church to see many artifacts. We could not take photos in the museum.

Before we went to lunch I took a photo of a spotted pigeon.

We ate lunch at the Antica Cultural Restaurant. The food was so delicious. We also loved the atmosphere of the restaurant. 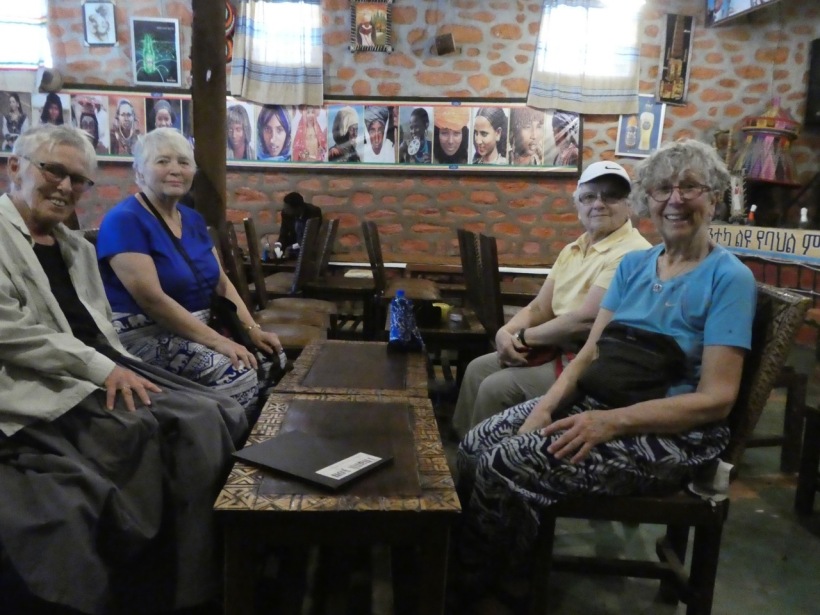 The chairs in the restaurant were wonderfully carved.

The stove in the kitchen has been filled with rocks.

This beautiful tree near Dungar is a Euphorbia Candelabra. 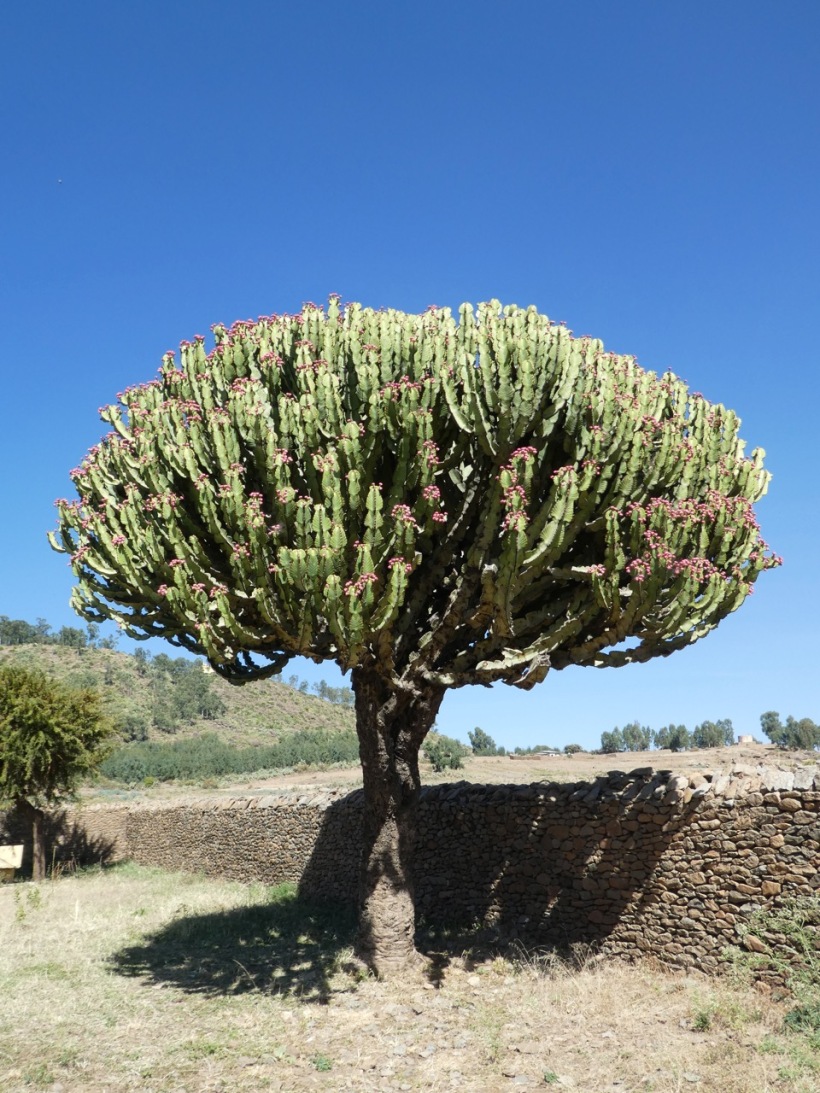 According to the Old Testament, the Queen of Sheba was born in Axum but travelled to Israel to meet King Solomon. It is said that their son, named Menelik, later became the first emperor of Ethiopia and that it was he who brought the original Arc of the Covenant back to Ethiopia from Israel. This reservoir was romantically named “The Bath of the Queen of Sheba” and the people of Axum still use it. Rafael thought that the actual pool that Queen Sheba used was much smaller and was expanded by Emperor Haile Selassie. It is used for the Timket celebration in Axum. 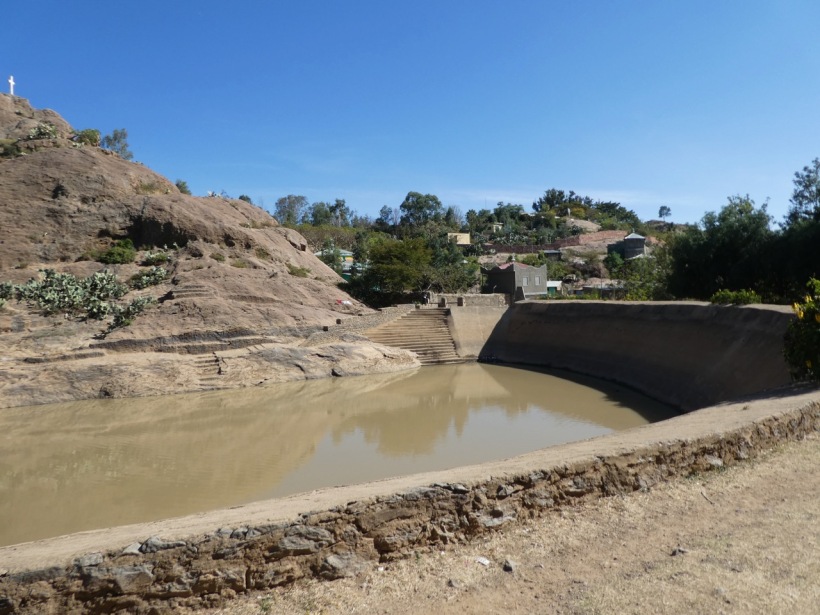 The string of mountains (named Adwa) in the background of this photo is where the Ethiopians defeated the Italians in 1896 using only simple weapons that the farmers brought from their homes. The women provided a pepper substance that could be thrown into the eyes of the Italians.

Then we visited the Tomb of King Kaleb and his son, King Gabre­ Meskel. The tomb consists of one chamber and five rooms. Inside are three sarcophagi. 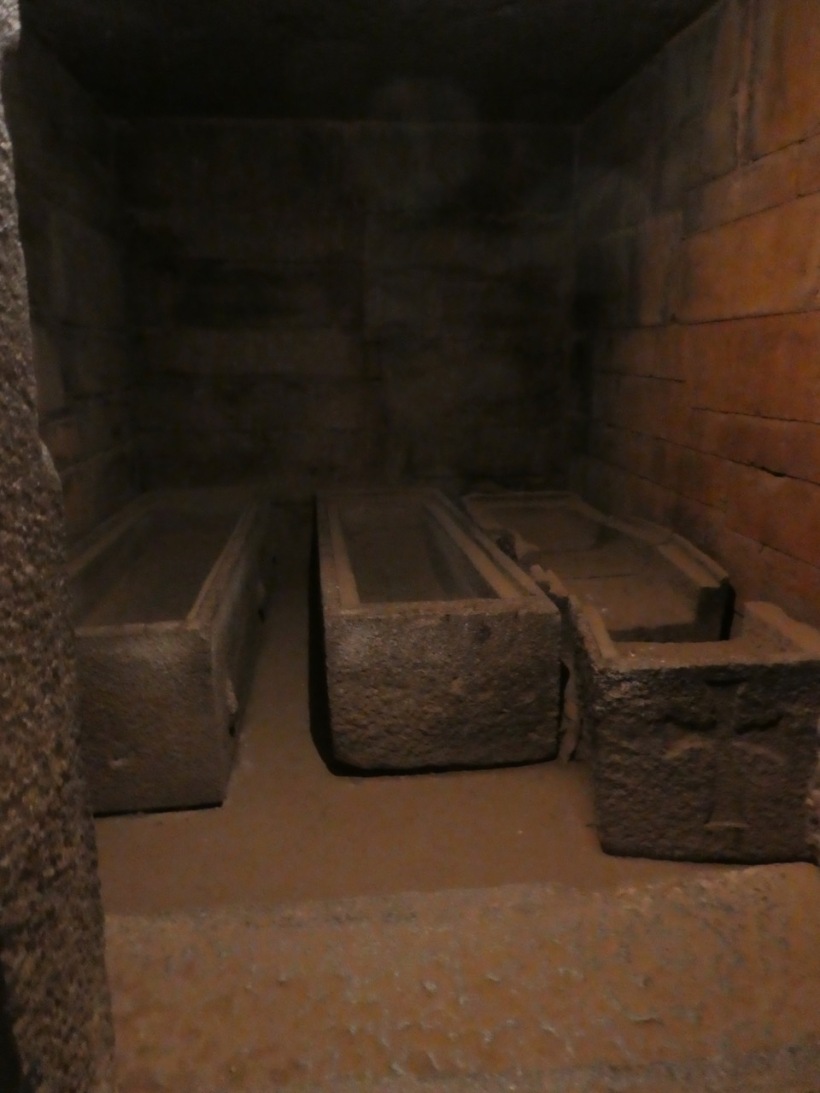 We accessed the tomb via a long straight stairway. Although many believe that King Kaleb created this tomb, the common theory is that his body lies at Abba Pentalewon monastery, where he lived after abdicating his throne. The tomb’s unfinished state fits with this theory. Local rumor has it that there’s a secret tunnel leading from here to the Red Sea.

Some also believe that King Gabre Meske is also buried at a monastery but others believe that he is buried at Debre Damo. In his tomb, which as 3 rooms, there are several different crosses carved into the stones. One of these crosses is similar to the Axumite Cross.

This is a view looking up the staircase from the tomb.

The last place we visited today was the Ezana Stone. It belonged to an Askumite King of the 4th century AD known as Ezana. It is inscribed with Greek, Sabean, and Ge’ez. The inscriptions tell the story of Ezana’s victories over his enemies and the story is written three times over in each of the languages. 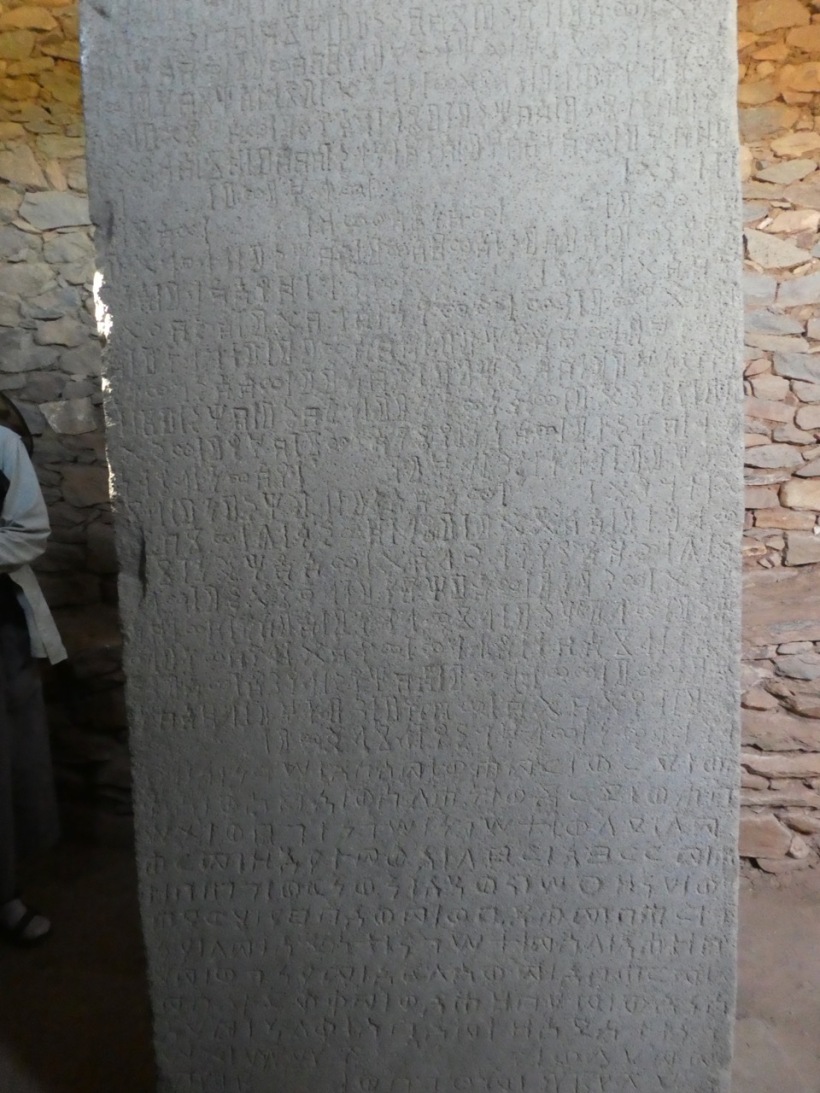 On the way back to the hotel, Ayu took us to a market to buy a watermelon. He also chose 4 oranges for us. Then he asked the woman to give him and extra orange. She said, “No,” but then agreed. 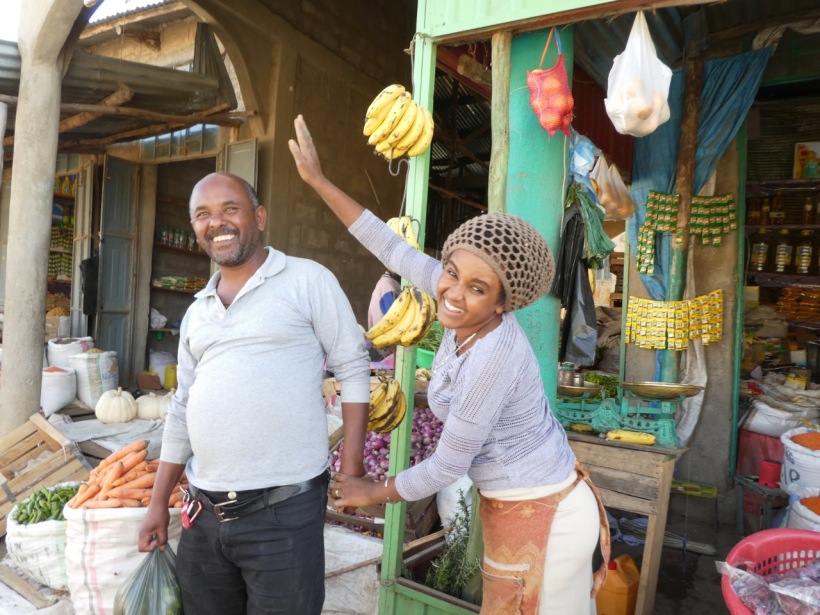 There was a woman near the market who was sitting on the ground with a shallow bowl of teff on her lap. She would shake the bowl until some teff that was not as good sifted to the top and then she would remove it. She did not want me to take a photo of her but she let me take photos of the teff. 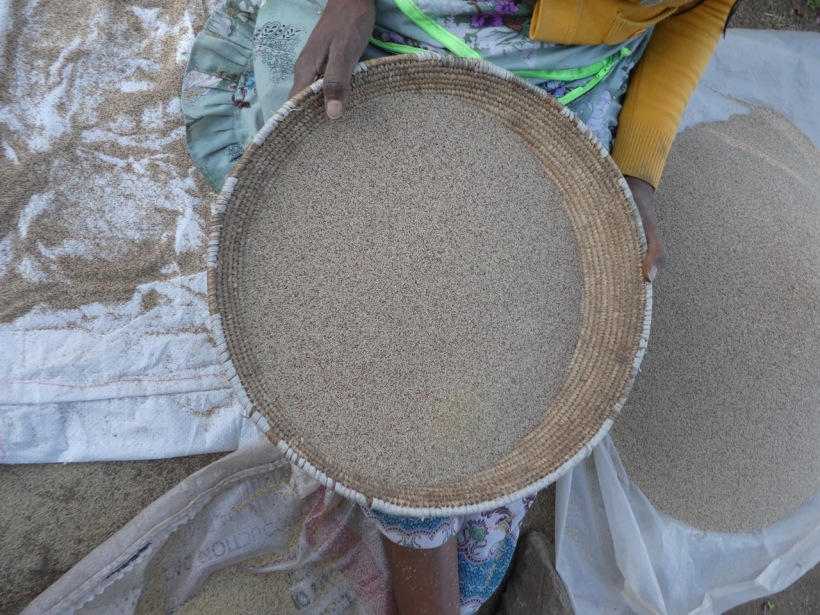 Ayu took Sue and I back to the restaurant where we had lunch so we could see the cultural dancing. We both had the same soup for dinner. The dances that were performed by young local men and women were fantastic. It seems like they have no bones in their bodies and it is so hard to believe how they can move the way they do. I took a couple of photos they are a bit blurry because they are moving so, so fast. 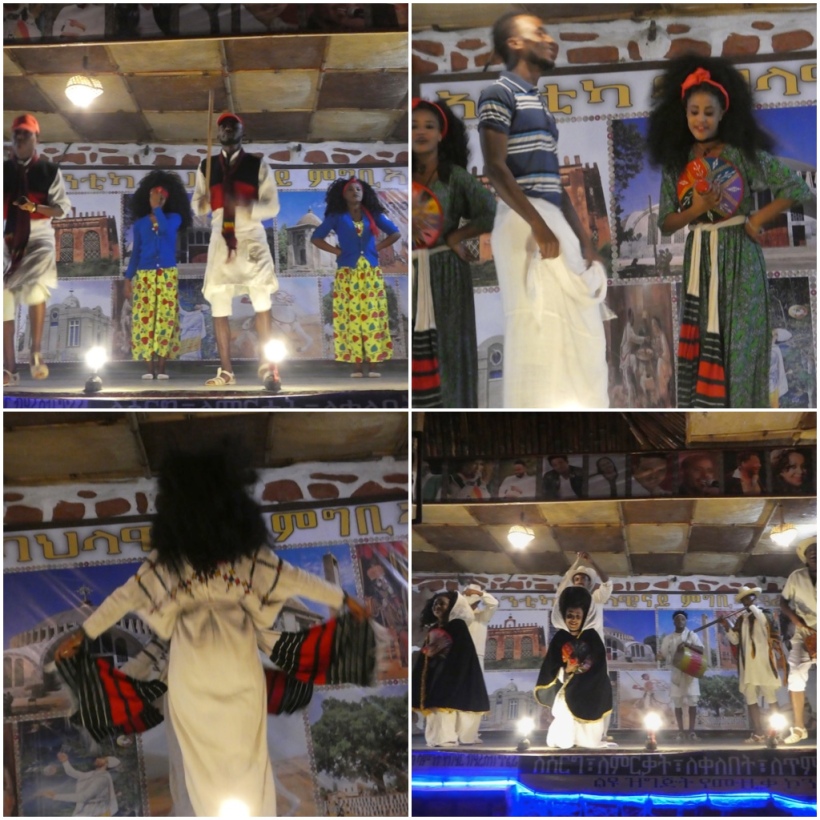 This evening is another example of how wonderful Ayu is.  It was so nice of him to spend his evening with us. Another wonderful day in Ethiopia.