Last night we had thunder and lightning again.  It started at about 9;00 and lasted until about 8 am this morning.  I took this photo before I went to sleep last night. 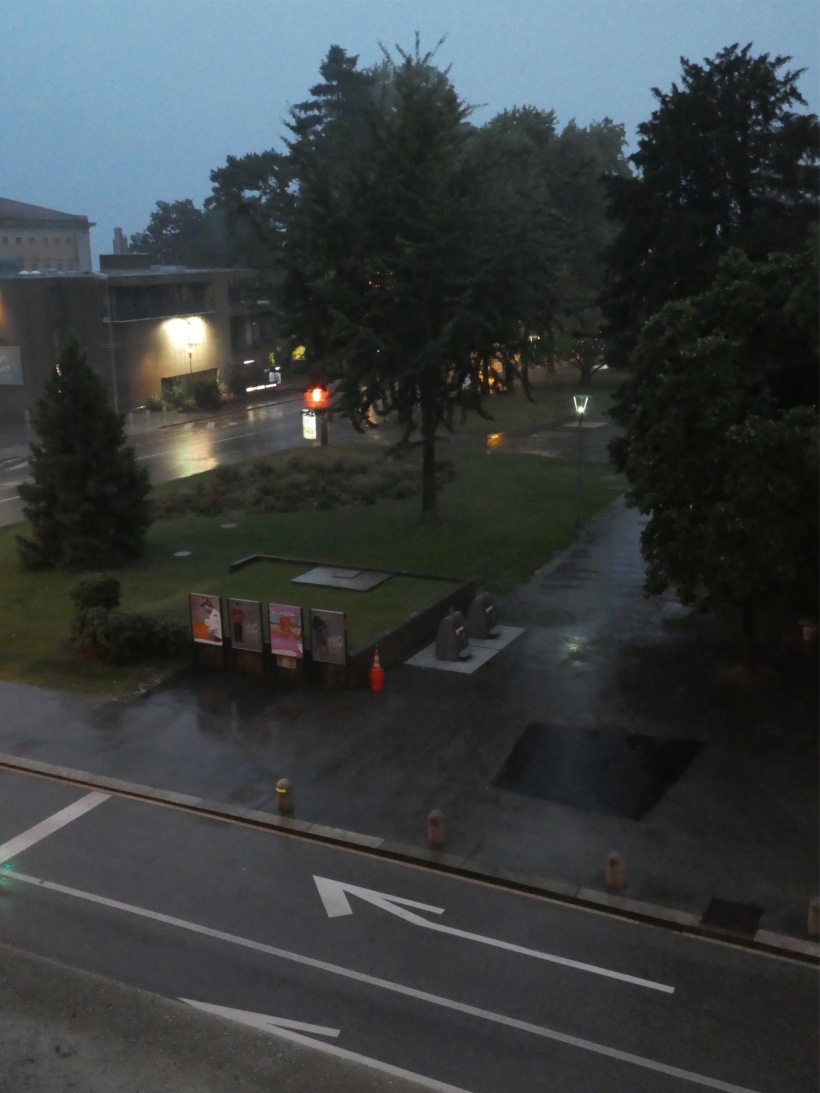 It was still raining a bit when we got on our first leg of the trip..  We made it to the 8:11 train to Bellinzona.  I thought it was going to be raining all day, but we were lucky again.  At times the clouds were low but we did get some views as we took 5 different trains to Zermatt.

I think it was because it had rained so much last night that the waterfalls we passed were absolutely rushing down the sides of the cliffs.  It wasn’t possible to take photos through the rain covered windows, but I was in awe at each one.  I loved seeing the volume of water,

The clouds in the hills were really pretty. 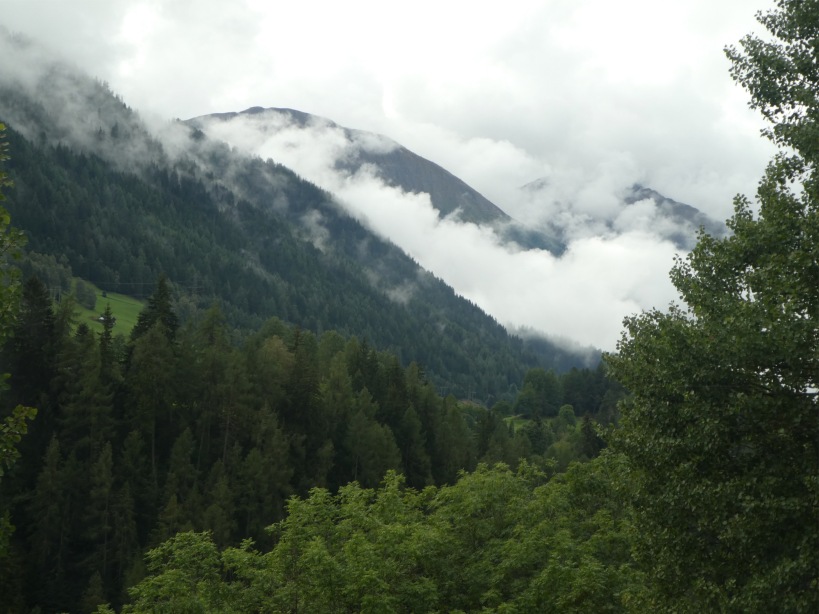 Shirley and I were the only people in the train car on the trip from Bellinzona to Goschenen.  It was very peaceful.  There seemed to be many more waterfalls when we were lower in the valleys than when we reached higher elevations.

Sometime after the Airolo train stop we went through the Gotthard Tunnel.  I took a photo of it off of the web.

At the Reckingan train stop there was a cute sculpture of a stone-man that looked like a mountain troll. 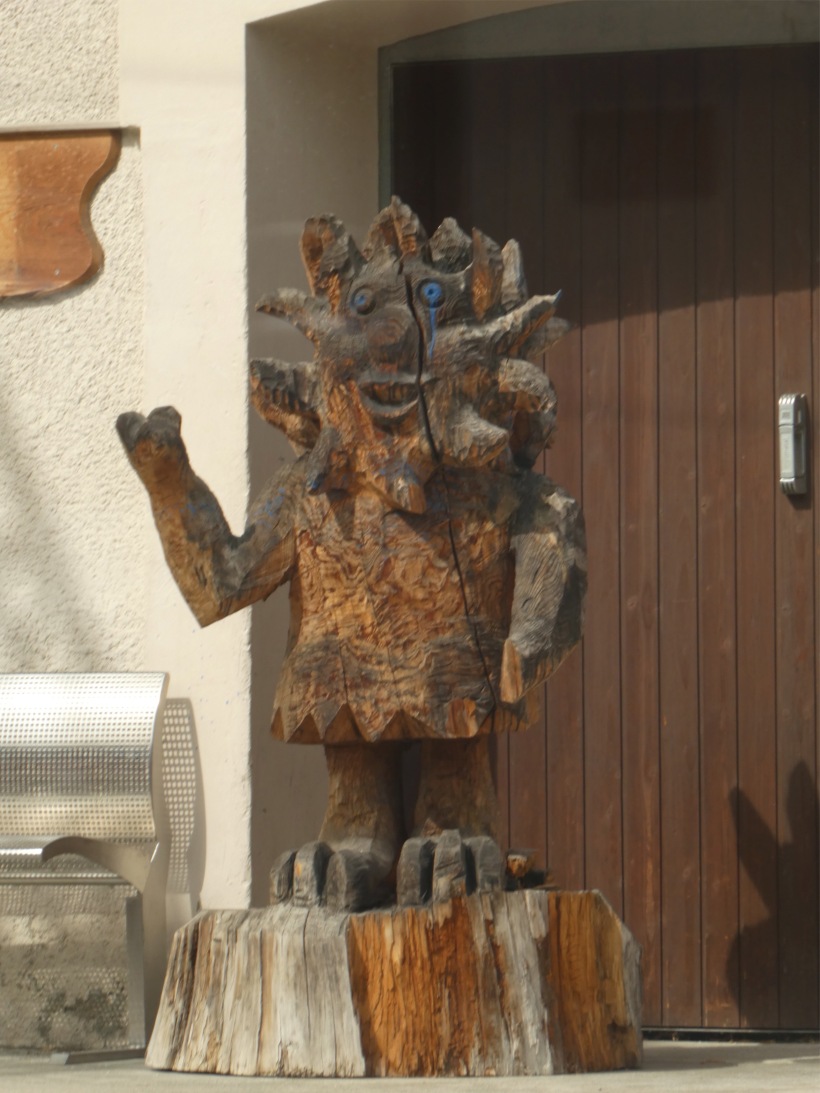 We passed a suspension bridge near Furgangen. 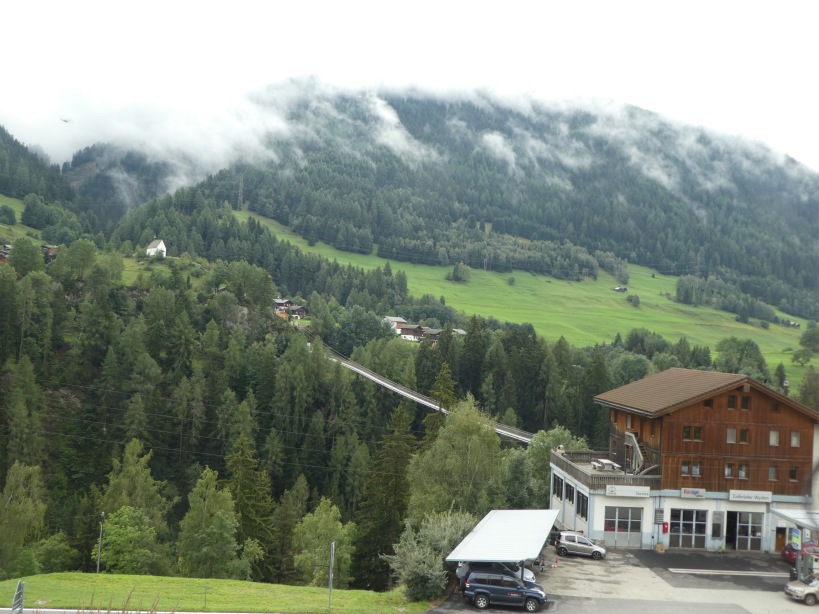 I loved watching the raging water in the rivers that we were passing.  I wish the photos could catch the motion and feeling. 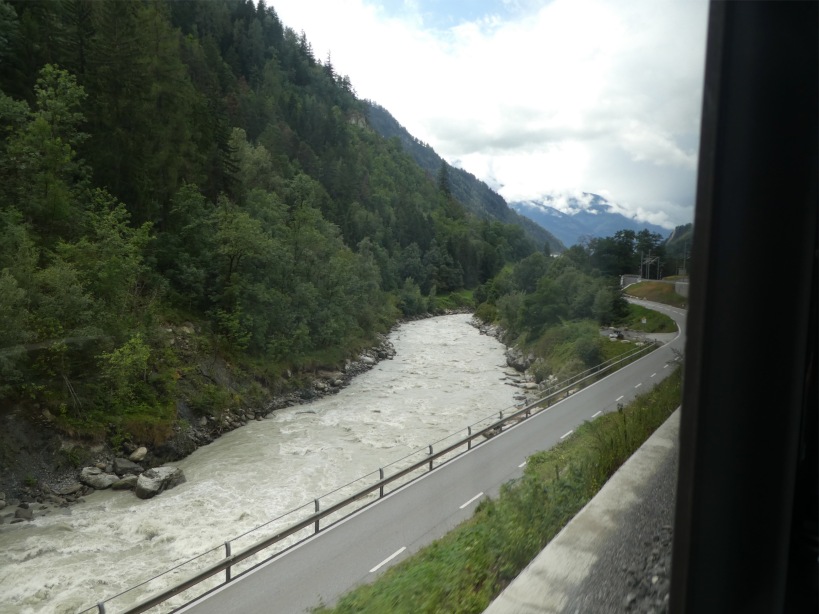 We passed one town that had a funny sign on the wall.  I think they were selling yogurt but I am not sure.

I like seeing the church towers as we go through each town.

A german man who was getting off the train stopped to talk with me.  He had been playing music someplace in the mountains.  He gave me an apple that was grown at 1200 meters before he left the train.

It started to rain a bit when we got to the Visp train station but it was never very hard.

When we arrived in Zermatt, it was only raining a little bit.  We  went to the Information office to get some information and then took a bus up the road.  We found the Patricia Residence Hotel and dropped off our luggage.Shirley and I went out walking to explore Zermatt a bit.  I saw a Mount Bell store that is much bigger than the one we have in Portland.  It took some self-restraint to not purchase anything but having my suitcase pretty stuffed when I put my boots into it helped me stop myself.

There are a lot of people walking the streets of the town and they tend to walk in the middle of the street. Of course I stopped to get  a 3-flavor gelato cone. We saw that there was some musicians playing in a bar so we went in for a bit. 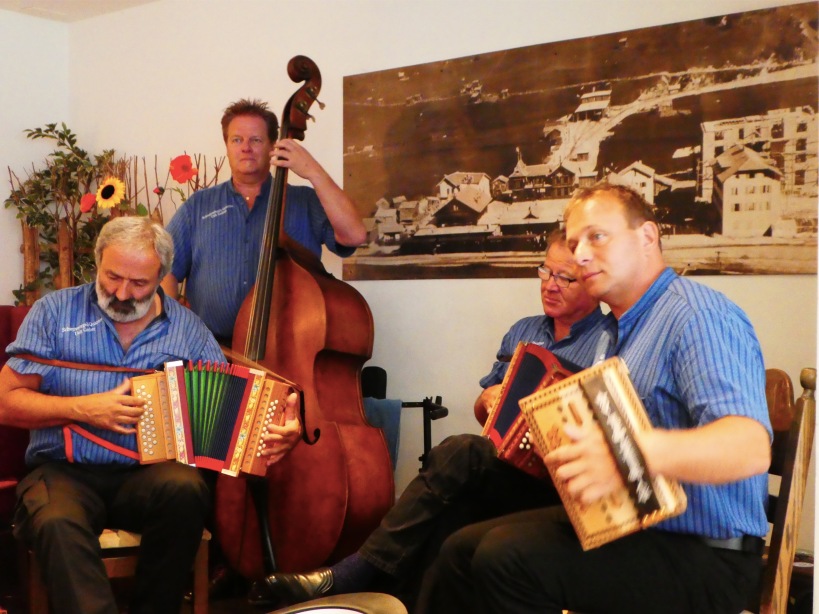 Listening to them reminded me of being at Octoberfest.

Because we have a tiny kitchen for the next 3 days, we stopped to get bread at the bakery; beef and lamb jerky at a meat and cheese store; and bread, cheese, butter and fruit at the grocery.  We will be allowed to use the spa at the Best Western so we searched for it (not easy to find) and explored what was available.

Tonight we looked over the Zermatt guides and maps and tried to figure out which hikes we are going to do for the next couple of days.  We have 3 nights in Zermatt.  Our room is very pleasant and even has a couch. Tomorrow is forecasted for rain so we will decide in the morning what our day will consist of doing.