Today was another glorious day in Pontresina. We took the chair lift at 8:30 this morning up to Alp Languard where we were caught in the bit of rain and walked down on the 27th. The weather was beautiful.

When we arrived at the top, Shirley took a picture of St. Moritz with the Swiss flag in the foreground. 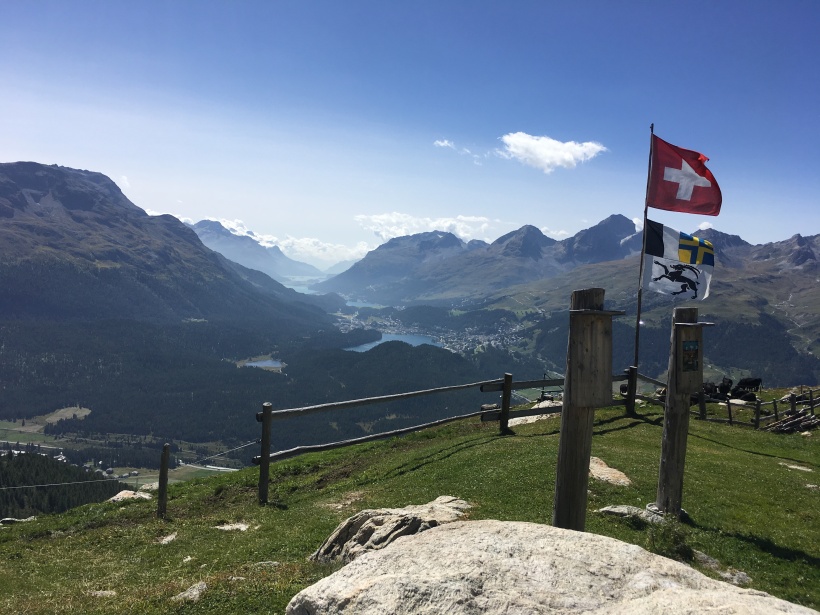 I took a photo of St. Moritz and the mountain where we hiked yesterday (Piz Noir). When I looked over at it, I realized that Shirley saying it reminded her of the surface of the moon made perfect sense.

…we began the Klimaweg hike.

The brochure said the hike would be 7 km but did not check the elevation gain.   We did not know how difficult this hike was going to be by any stretch of the imagination. In about the first 2 ½ miles of the hike we gained 1332 feet. The trail was harder than any trail around Portland.

Here are a few of the photos that Shirley and I took of the trail. Shirley is climbing up the rocks. 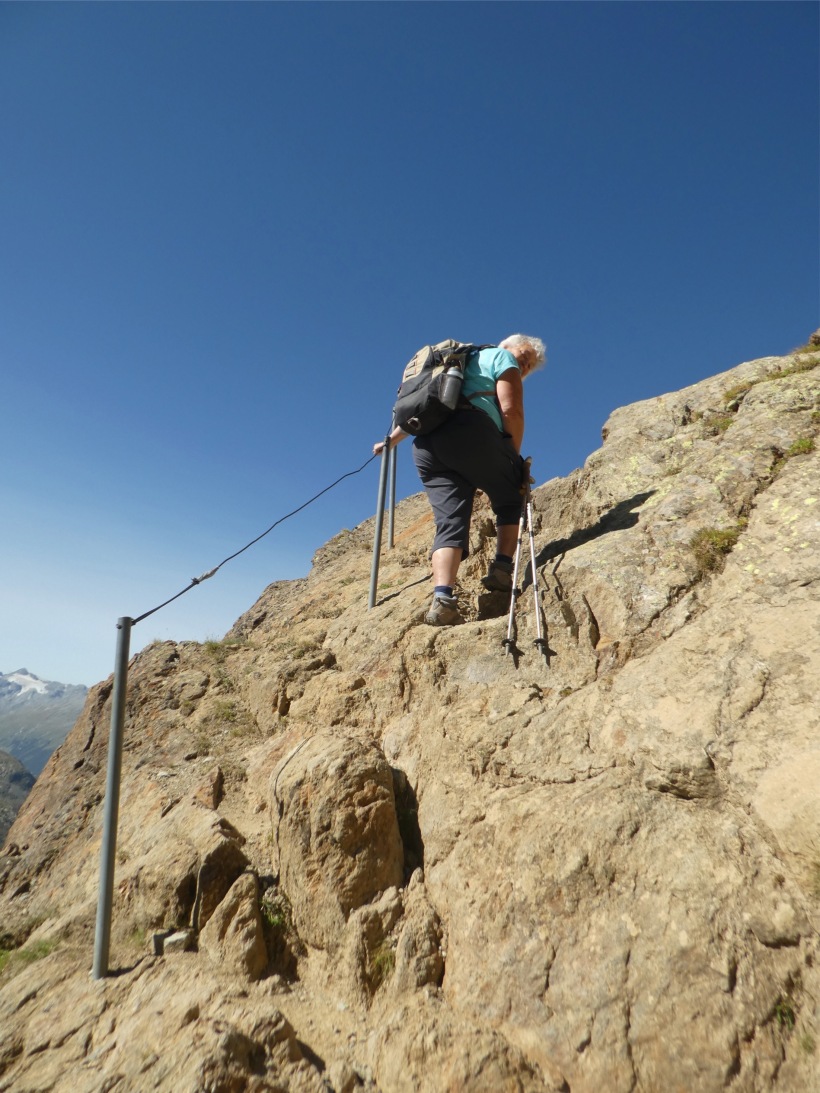 She made it to the top.

There were portions of the trail that were very rocky and had a sheer drop off.  Don’t get me wrong.  Shirley and I were still having a great time.  We were just very tired and sometimes a bit scared.

At one point there was a large group of children that were probably about 9 to 12 years old.  One of them tried to take a short cut off of the trail and we yelled for him to stop.  We were so  surprised to see them running on the trail.  The 2 supervising adults were behind the group and did not seem to be concerned.

We finally mad it to Chamanna Sagantini at 2731 meters. I saw a man at the top who looked like he had a more accurate map and I asked him to see it. He told me that he and his wife were from Sisters.  They had to evacuate during the total eclipse and weren’t sure they were even going to get back to their house to get their stuff and leave for this trip.  They arrived in Switzerland a day after Shirley and I.

By the way, we have only met 7 english speaking people (2 from Ohio; 2 from Louisiana, 1 from BC in Canada, and this couple) so far.  Almost all of the people we pass says, “grüezi” as they pass us.We have learned that it is the Swiss German word for, “Hi.”

I found it interesting that  with the 360 degree views, only 90 degrees had glaciers.   Shirley bought a piece of chocolate cake and  we stopped to eat the lunch we had packed at breakfast this morning.

The toilet was very interesting.  Under the toilet seat was an elongated plastic bag.  They must haul out the bags.  All supplies have to be delivered and I am not sure how they do that.  There was a great sign on the inside of the toilet.

From the top we also realized that there were many lakes beyond the lake at St. Moritz.

Noe it was time to walk the other few km. (according to our brochure.  This path was so much easier because they had covered the very rocky parts with flat rocks.   I was totally amazed at how much work this must have been.  This path when on and on and on. 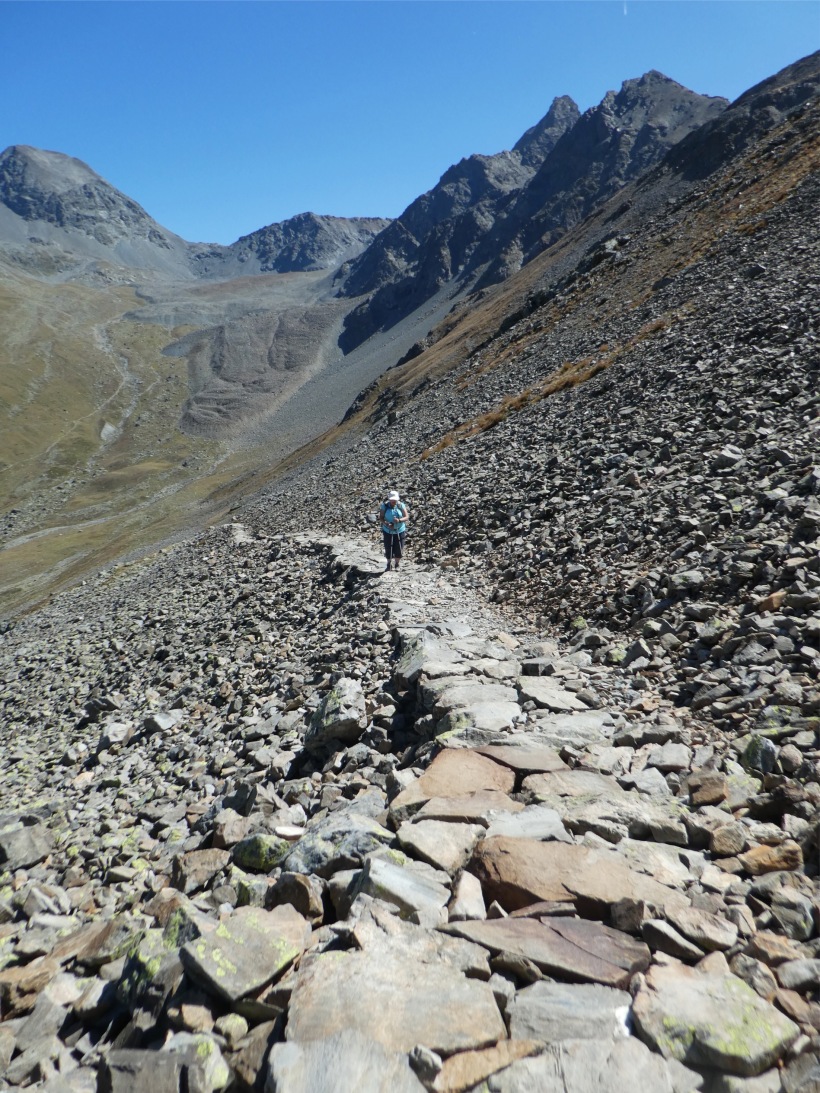 Shirley took a photo of me on the path.

I thought that walking to Muottas Mjragl was going to be all down hill.  But – NO – we still had quite a bit of uphill to do.  Well maybe it wasn’t many km or very steep, but we were pretty hot and tired by the time we had to do it.

There was a helicopter over head on its way to a rescue.  It landed not far from where we were hiking down.  We could tell that it had to land in a flat place and then probably walk to do the rescue because after it landed it took quite some time before it took off again. 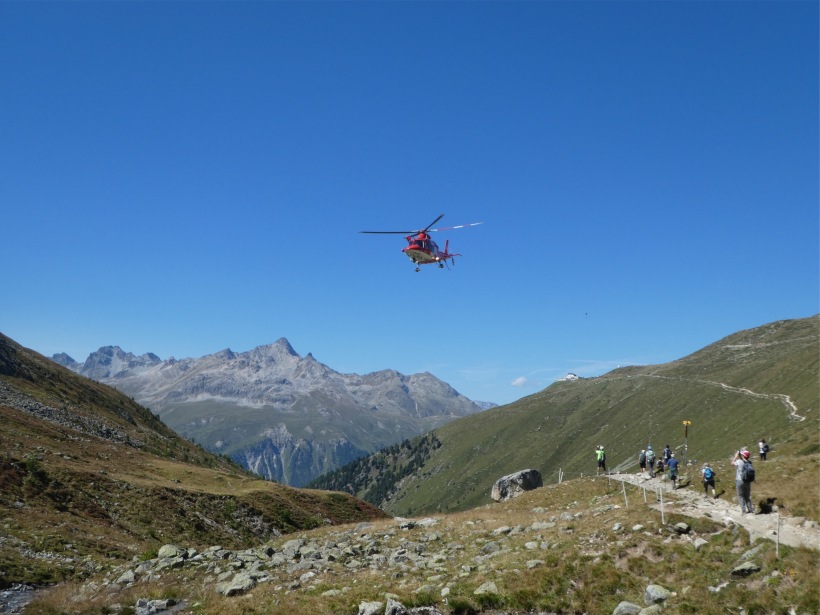 One really nice thing is that Shirley and I walk at about the same pace except for on the flats when Shirley is a bit faster and all the stops I make to rest on the way up.  The hikes in Switzerland (like Australia and New Zealand) are marked by how much time it will take to do the hike and doesn’t tell the number of km..  That makes no sense to me since:

We finally made it to the funicular. There was an outdoor restaurant and a hotel called the Romantik at the top.  It sure would be a beautiful place to stay.

I got to ride in the front car and took a photo of the one coming up as we were going down. 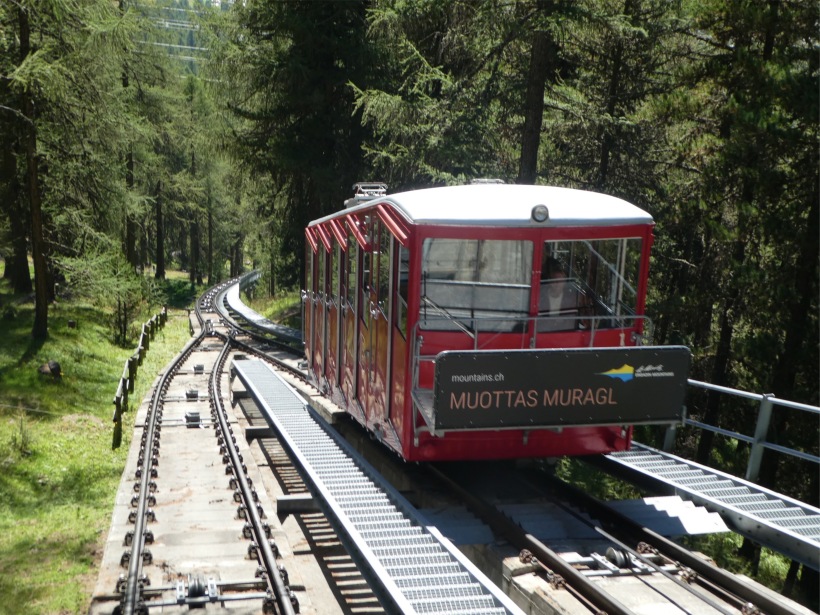 We took the bus back to Pontresina and had ice cream cones.

Tonight we had a very delicious dinner of sea bass and salad at Gianottis.  This has been another fantastic day in Switzerland.