What an incredible morning. We are so blessed. When we left Berggasthaus Seealpsee to walk back to Wasserauen, the reflections of the mountains in the lake were so stunning.  I took photos from a couple different places. 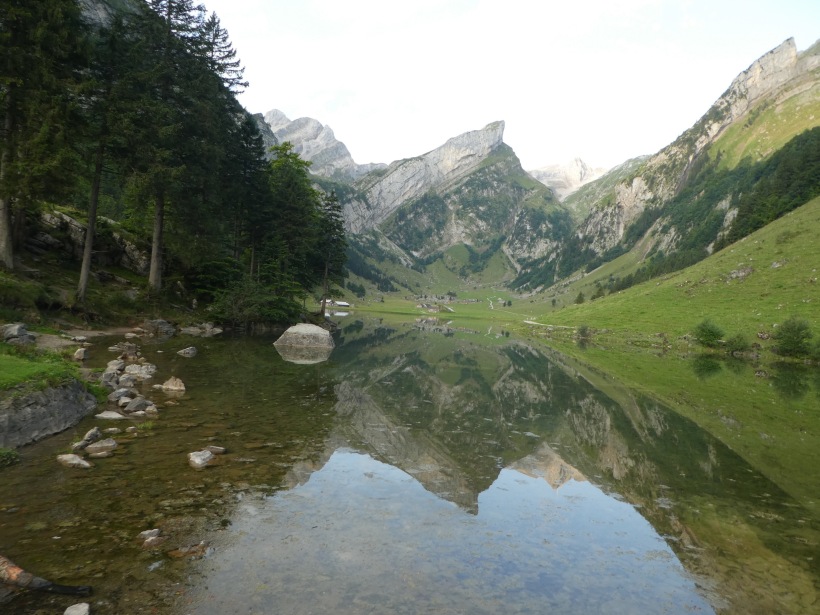 As we walked up the path through the woods we noticed the reflections of the trees onto the lake below.

We passed the farm and watched the cows leaving the barn to go out to pasture. 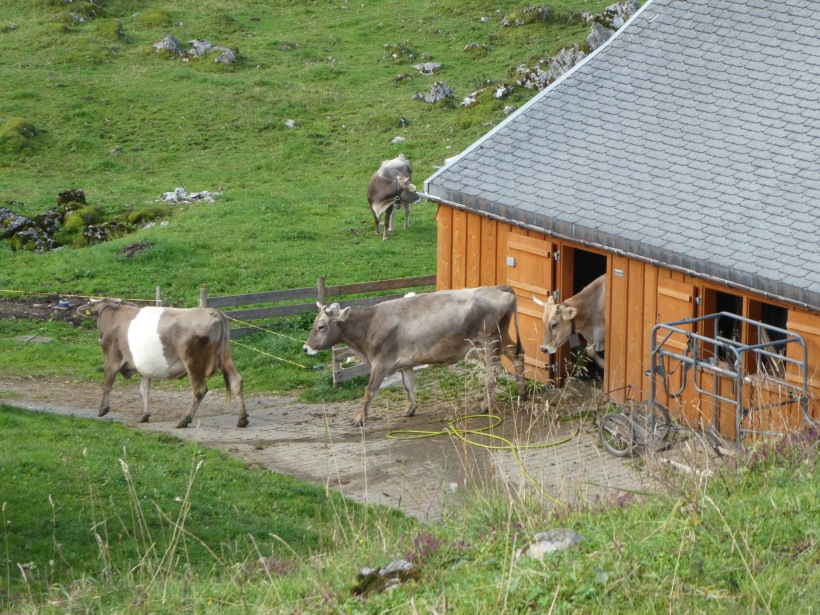 I had to stop and take a video so I can remember the sounds of the cow bells serenading us as we walked. Below is the video that Shirley took because she caught me in her video.

The higher pitched bells are much more melodic than the low-pitched bells which remind me of a drum circle. I enjoyed all of them. We were thinking about how the cow has to constantly listen to the bell around its neck.

We passed a group of people coming up the hill and I stopped to talk to one of the men. I was able to tell him the places where we had hiked and slept. He pointed out that the Ascher Cliff restaurant was up on the cliff on the other side of the valley.  It can barely be seen on the left side at about the top of the grassy area below the rock surface

The waterfalls reminded me of hiking in Oregon.

I was absolutely stunned when I began hearing the sound of a horn being played. Two men were tuning up their alphorns on the side of the hill. We stopped to listen and to record the sound.

I also took a photo of them. 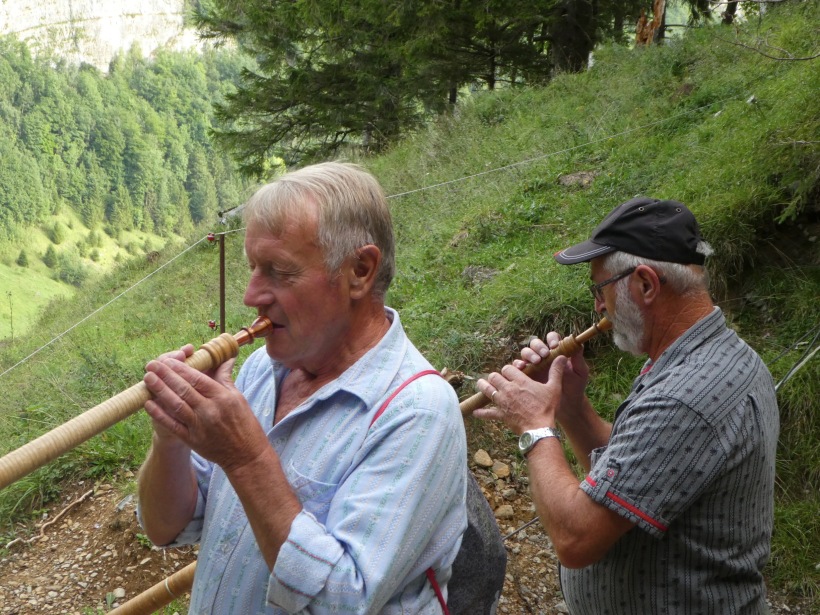 It is hard to even describe the feelings I was having listening to them as we walked down the hills. It actually brought tears to my eyes.

We made it to Wasserauen 1 hour earlier than we had originally planned and caught the earlier train.   We transferred trains in Gassau, Chur, Sanedon on our way to Pontresina.  When the train got to St. Gallen, they had everybody get off and change trains.  It was wonderful taking the train and watching the scenery all along.

We heard an announcement that we were about to go through the Landwasser Viaduct. It is a single track six-arched curved limestone railway viaduct. It spans the Landwasser between Schmitten and Filisur, in the canton of Graubünden, Switzerland. I took a photo as we were approaching. 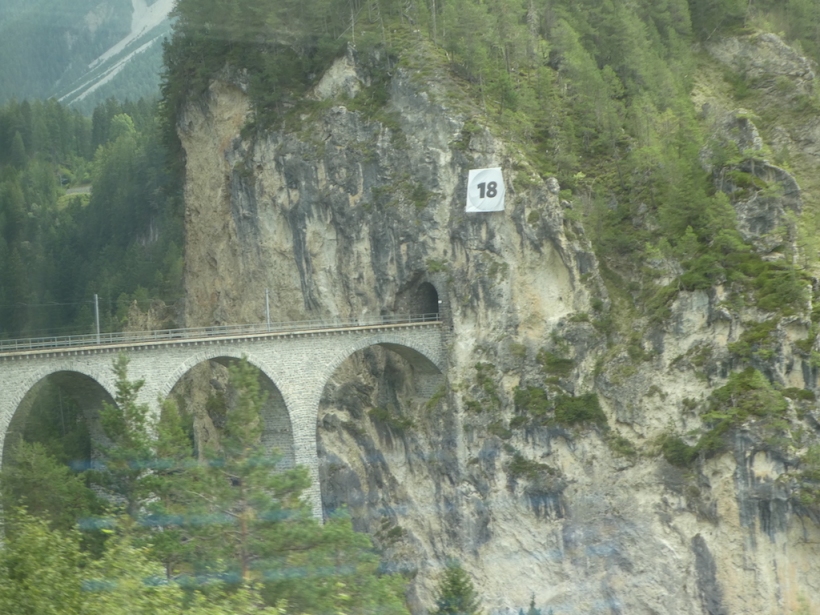 But the photo from the web is much better than mine.

As we were coming into Preda, we went through the Albula Tunnel which is the centrepiece of the Abula Railroad. It is among the highest tunnels in the Alps.

The Schweizerhof Hotel sent a shuttle to pick us up from the train station. After getting organized we took the chair lift to the top of Alp Languard. It started to drizzle and then rain more than we liked so I put on my rain jacket and Shirley put on her poncho while we were still on the chair. As soon as we got off of the chairlift we put all of our rain gear that we had with us. We decided to walk back down to Pontresina. I asked the chair lift guy to take our picture. He was really into it. So he took one of us by the maps and then wanted to take one of us by the flowers.

Then we started down (more walking downhill today). We heard marmots as we were walking. We kept looking but could not see any of them. Almost right away the sun came out so we stopped to take off our rain gear. It was a beautiful afternoon. 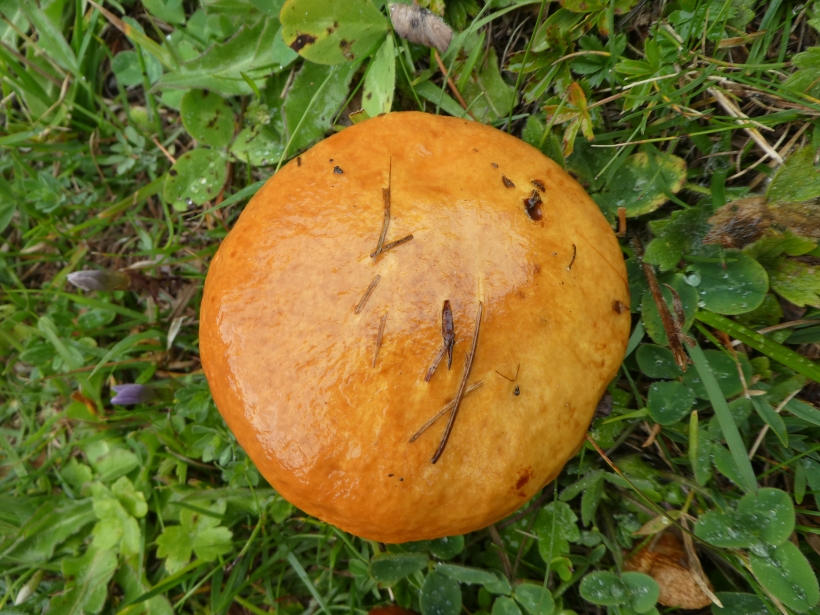 All of a sudden Shirley stopped. She saw a Marmot moving up the hill. It stopped by a tree and stood there for a long time enough to use the zoom to take  a couple of photos. 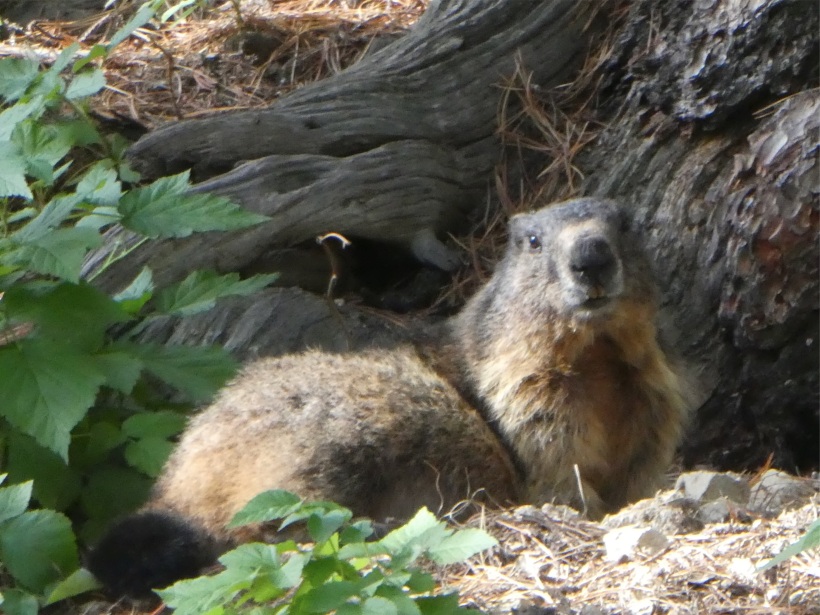 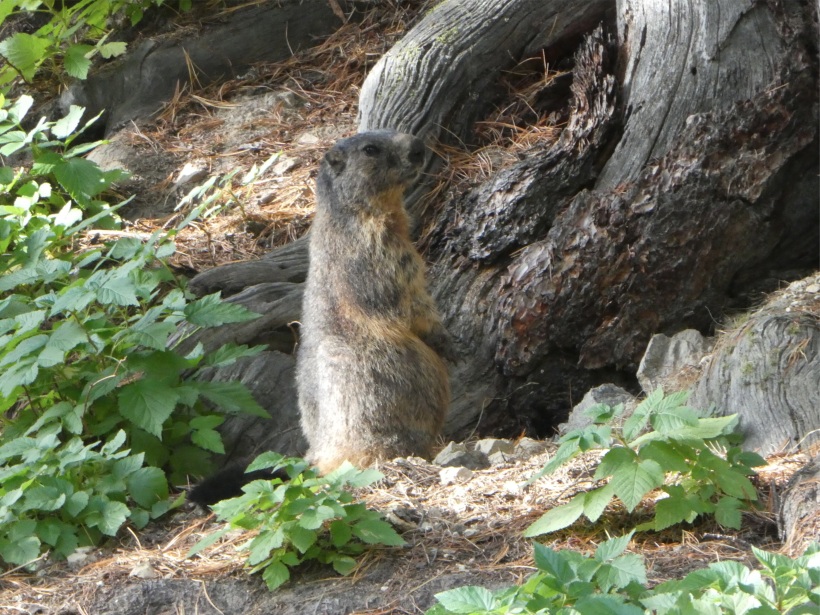 At one point it was digging in the hole. We are so incredibly lucky. I can hardly believe the wonder of today.