I woke up this morning to a petty nice sunrise viewed through our window. 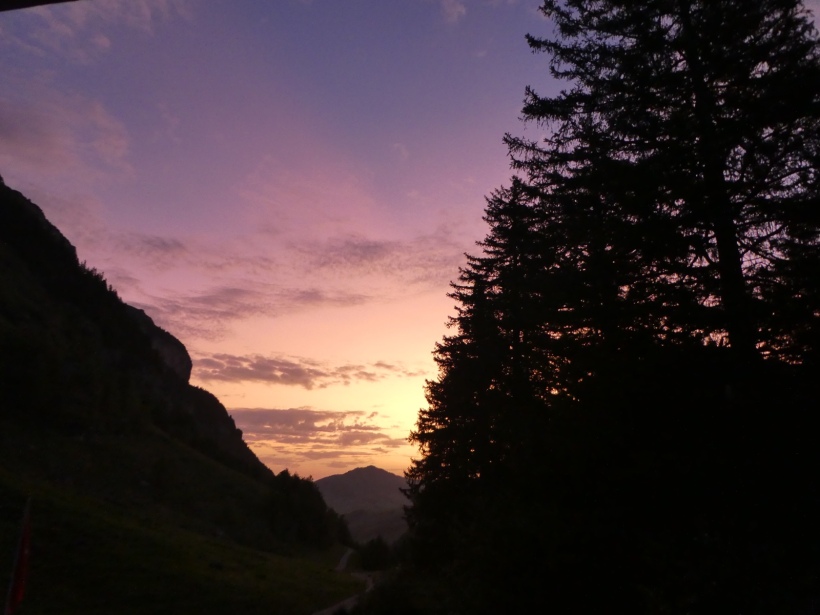 At breakfast I was able to take a photo of a group of people who I met last night. They are a guide, two teachers, and six students from a Red Cross school in Germany.

On Thursday night they had been hiking along the trail which is about 3/4 of the way up this cliffside.  It is very hard to see the trail but it is just above the last section of rocks where it is still green above the trail. 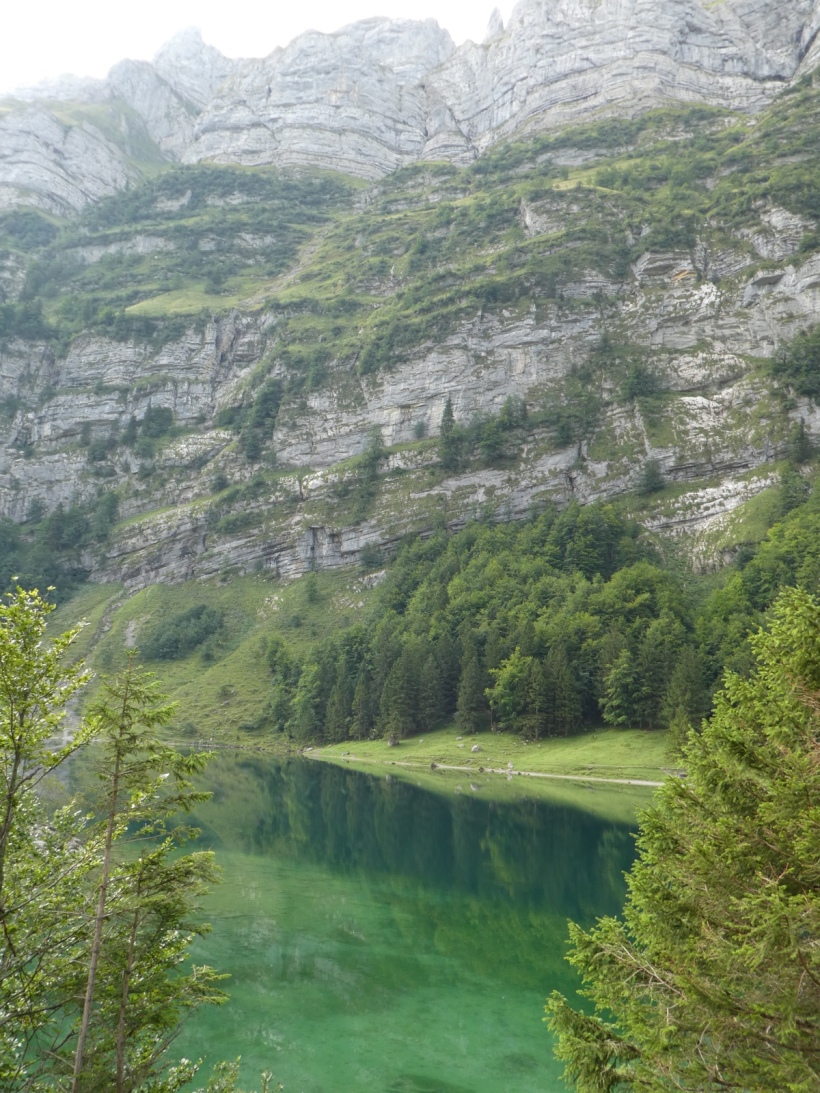 That is when that tremendous storm that we experienced from the safety of our room in Wasserauen hit. They were pelted with rain and  hail as thunder and lightning was all around them. They had already walked  too far from their last place to turn around so there was nothing they could do but to keep on hiking along the cliff side. They still had a long way to go? I can’t even imagine how scary that certainly must have been for all of them.

After a cheese and bread breakfast, we hiked up from Seealpsee to Mesmer.  It was a 1500 foot climb in less than 3 miles which took us about 2 hours and 15 minutes.  Taking photos along the way gave us a bit of rest time. 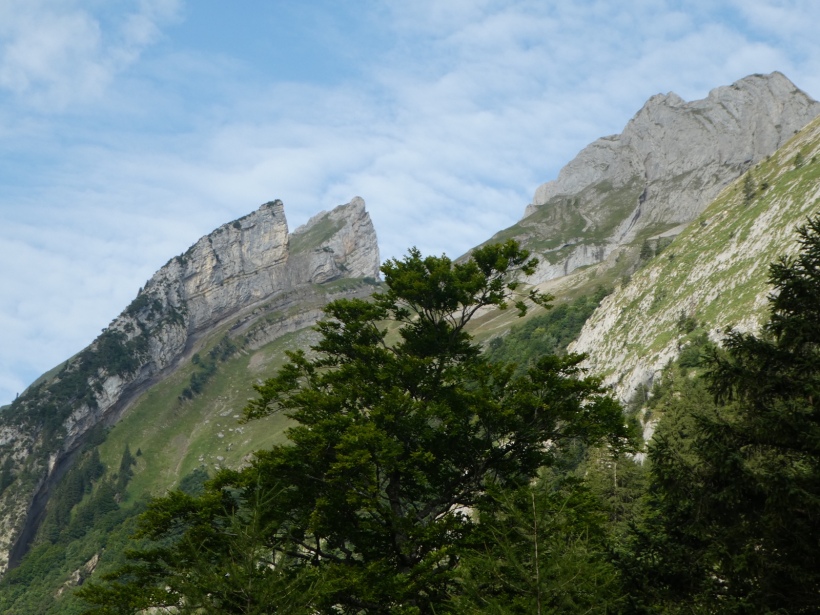 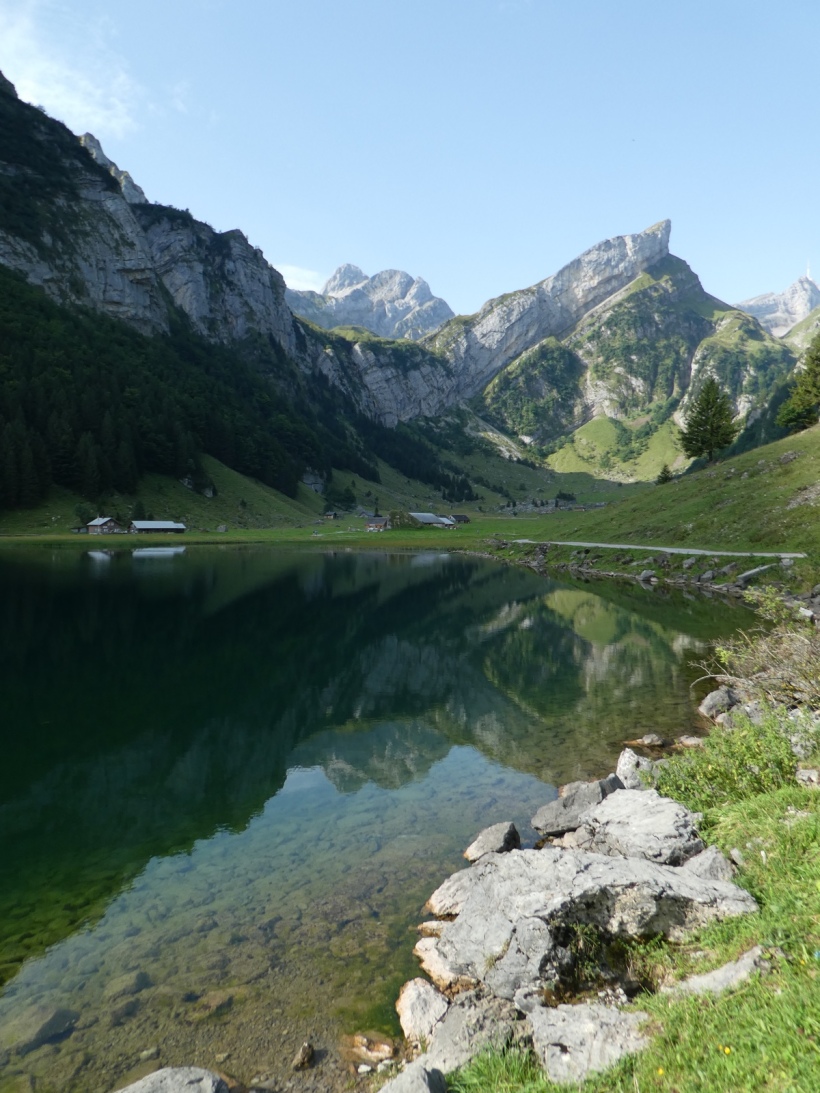 We were again serenaded by cow and goat bells during the lower part of the hike. 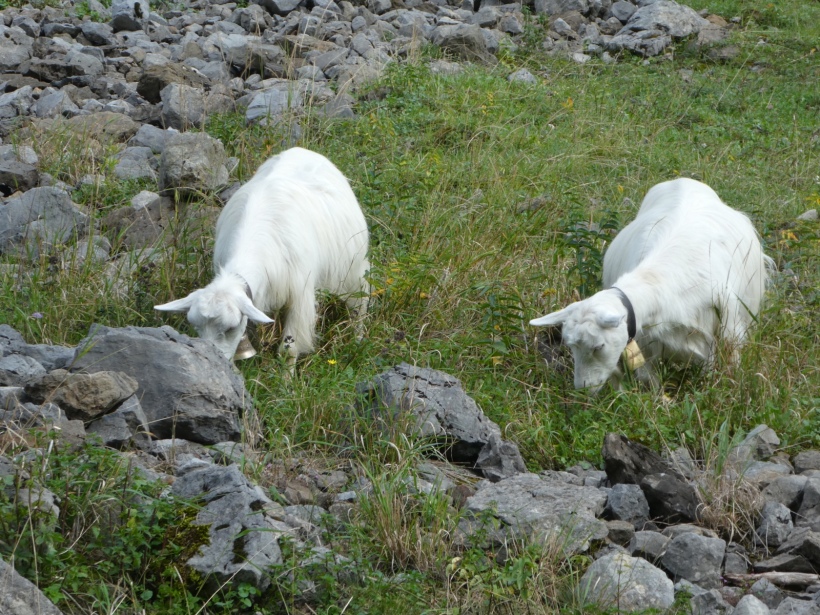 The bell around this cow looks so heavy. 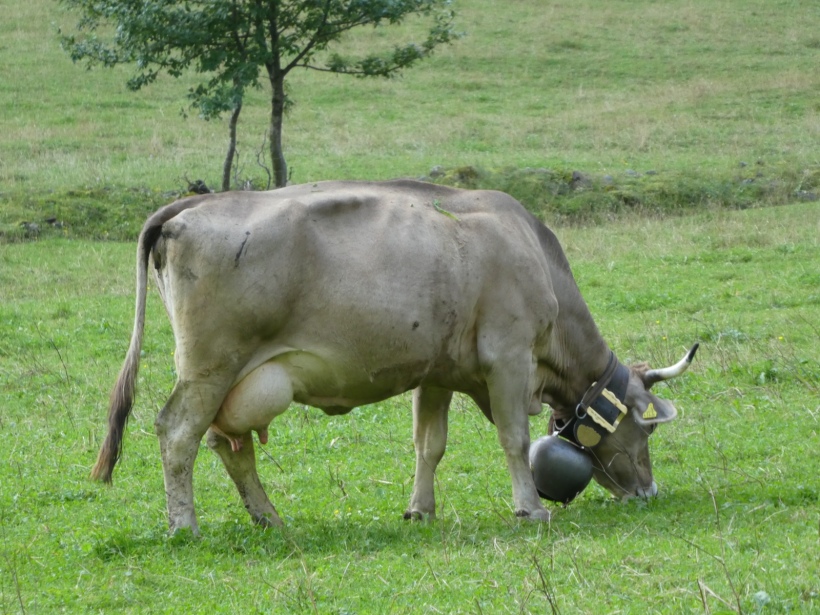 This bolder had fallen off the cliff and rolled to this place in June 1988. 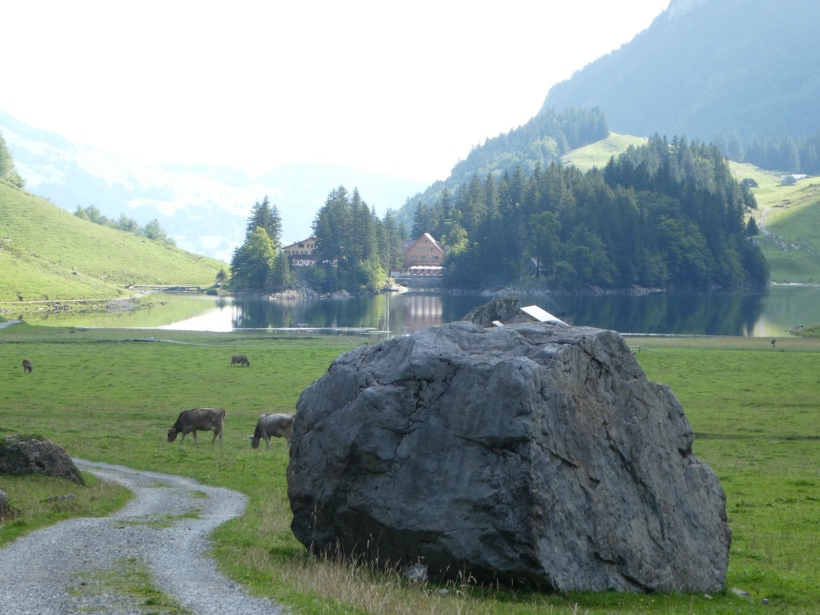 We walked by right after this crate of supplies for the top  had been prepared to haul up the cable  but we never saw it being pulled  up. 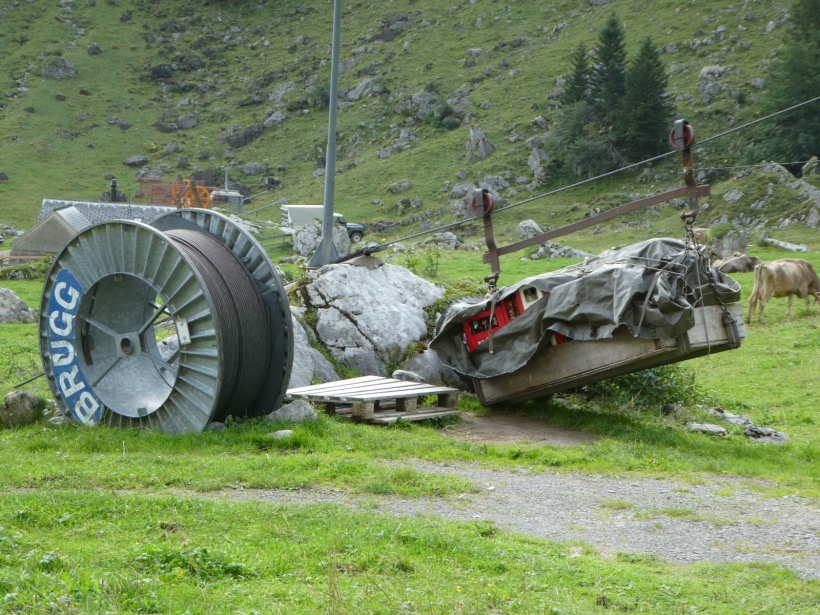 As we began the ascent, we kept turning around to take in the views. 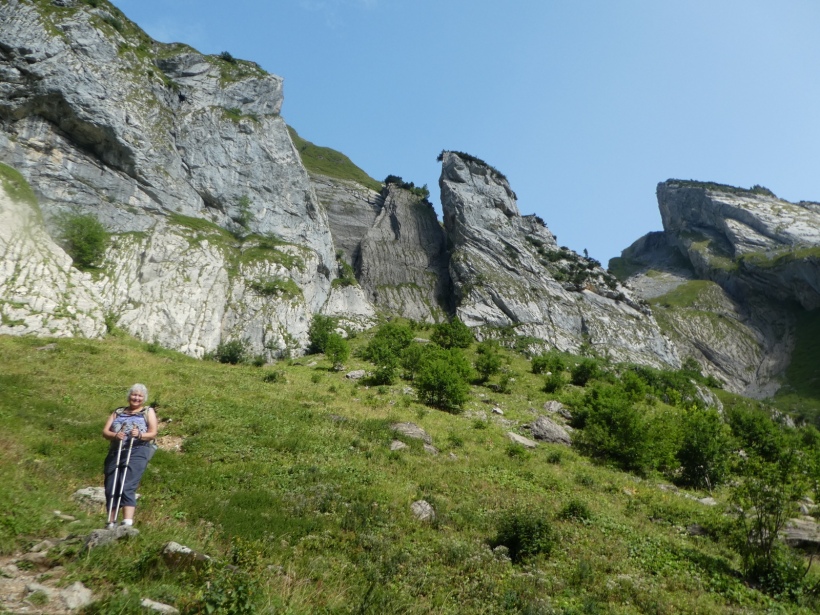 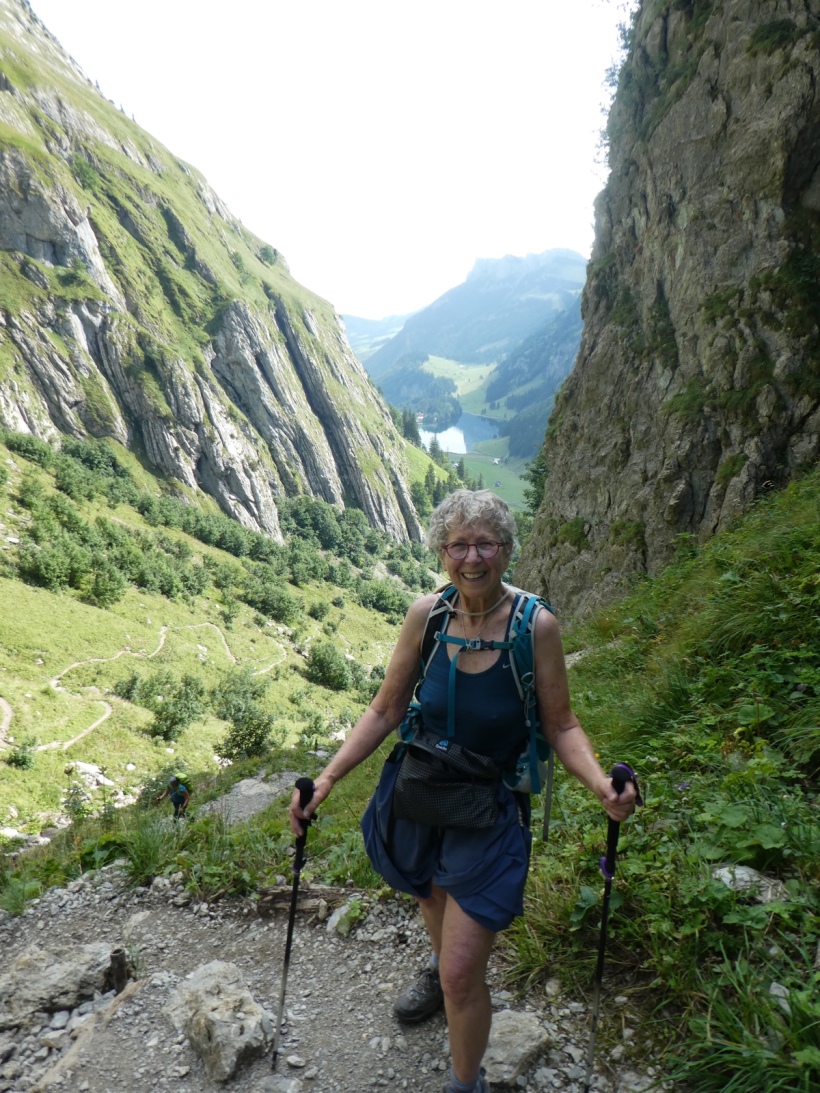 The trail was pretty rocky but easier than yesterday’s.  Loving the views made it worthwhile.

I just kept looking back at the lake below. 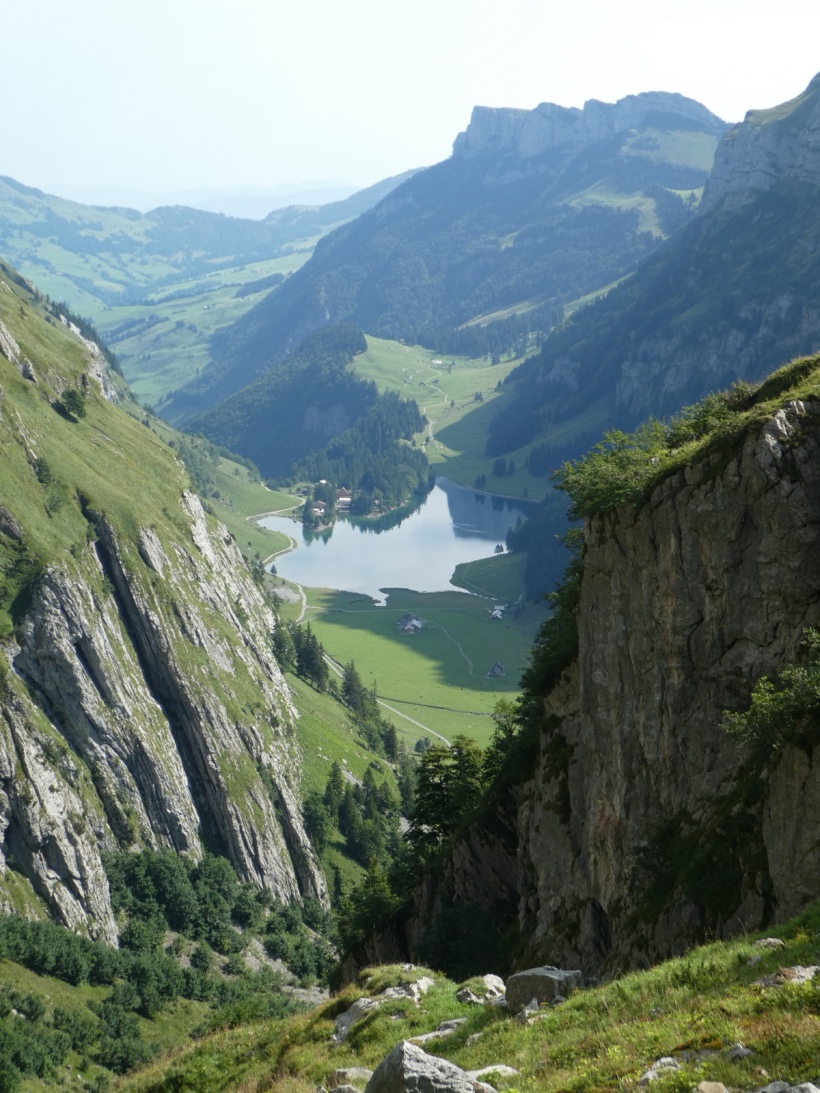 We were very hot so when we came to this broken pipe, I decided to wet my hat.  Shirley gave me a great idea so I put my hat on to my hiking pole and held it out into the water. 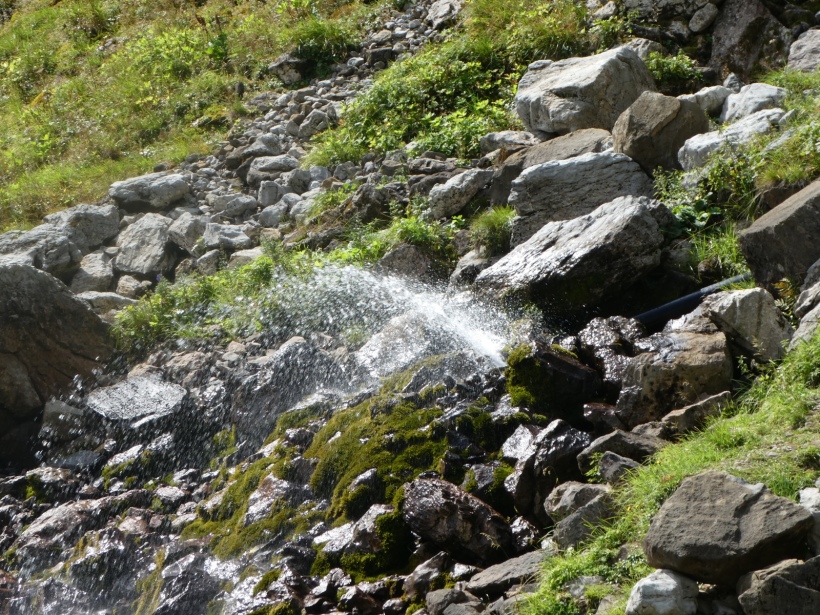 It was great to finally reach our destination at Mesmer.

As I was working up towards the gate I saw somebody waving at me.  It was the Swiss couple that we met yesterday at Schaefer.  We set down for a  Shirley’s beer and another orange drink for me. Then we decided to share a Rosti with cheese and salami as we conversed with the Swiss couple..  This one was made more like a pancake. 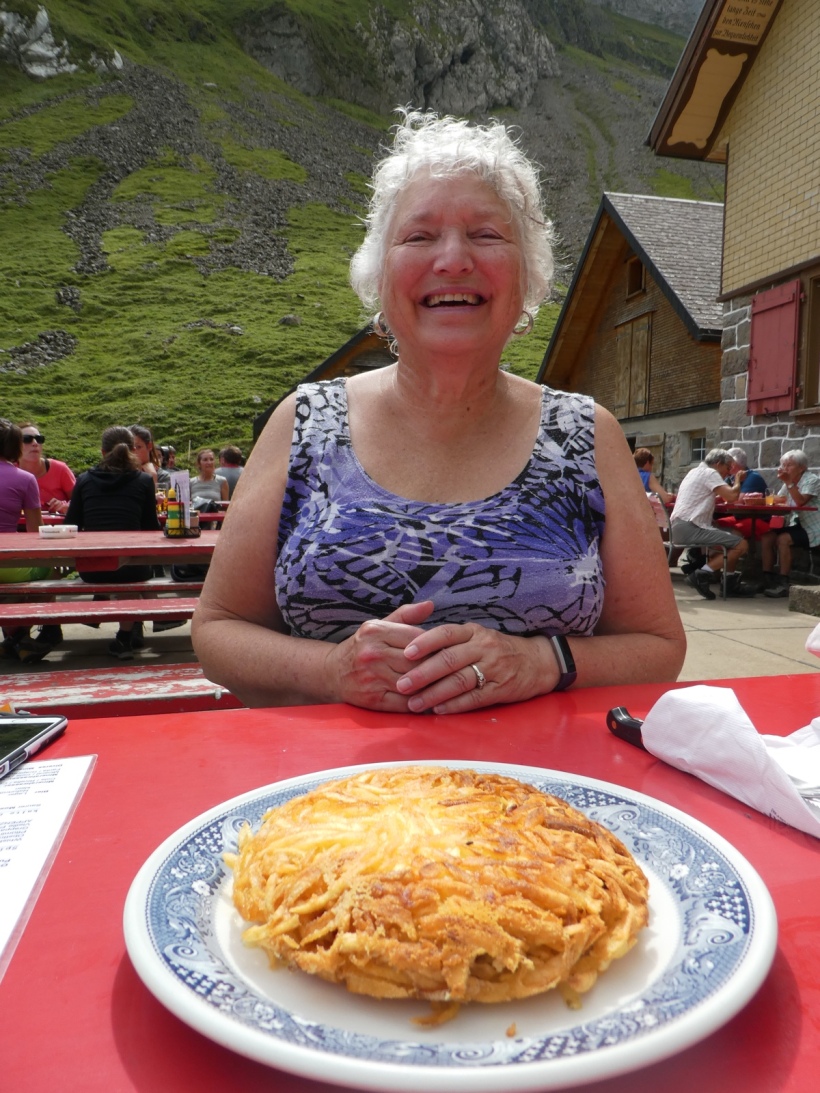 The return hike to Seealpsee was much easier than the down hills from yesterday. So when we got to the bottom we decided to take a walk around the lake. I saw a place that said “milkshakes”  and we decided to stop in the shade for a bit. It turned out to be just chocolate milk but we had  a conversation with a family that lives not far from here . I asked them what animals we can expect to see in Switzerland and they said, “cows” and then she said “goats” so we had a good laugh.  They were able to explain to me why this cow had this pointy yellow thing attached to its nose. 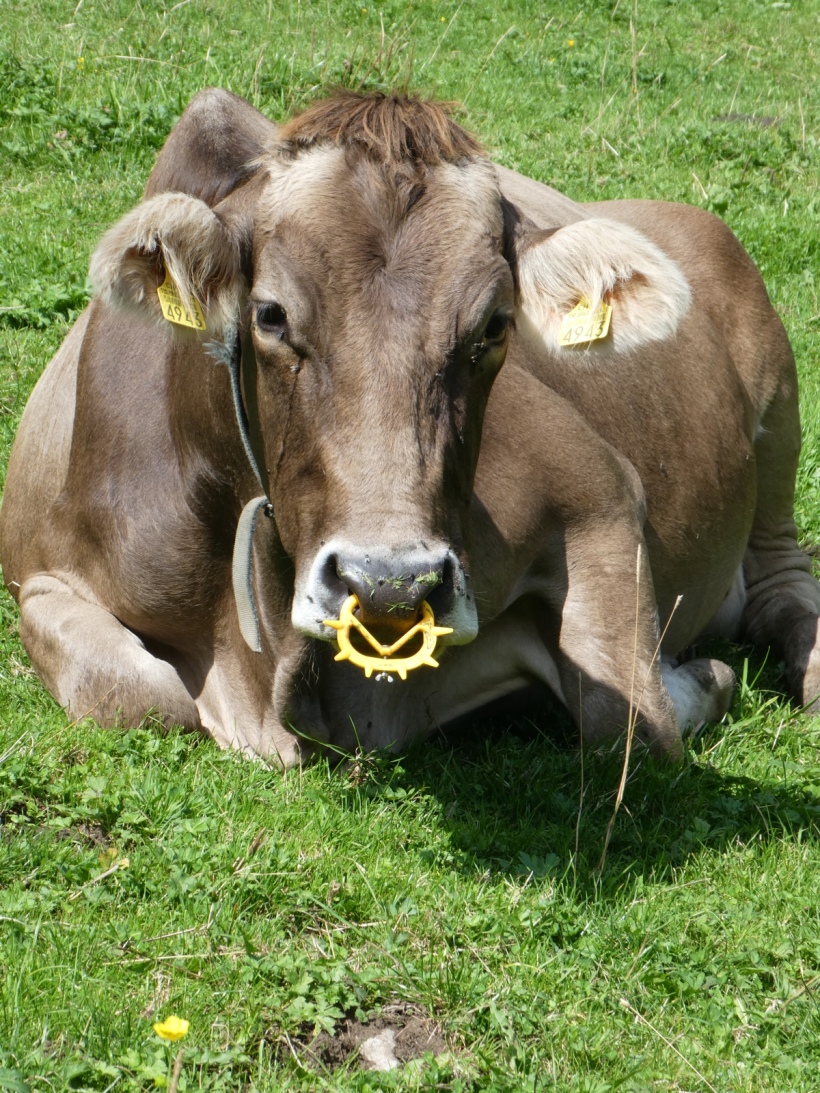 It is because this particular cow likes to drink milk from a cow that is not its mother. So the pointy thing gets the mother cow to walk away.

Just before starting a walk around the lake we saw these beautiful white goats. Their hair in so very long. 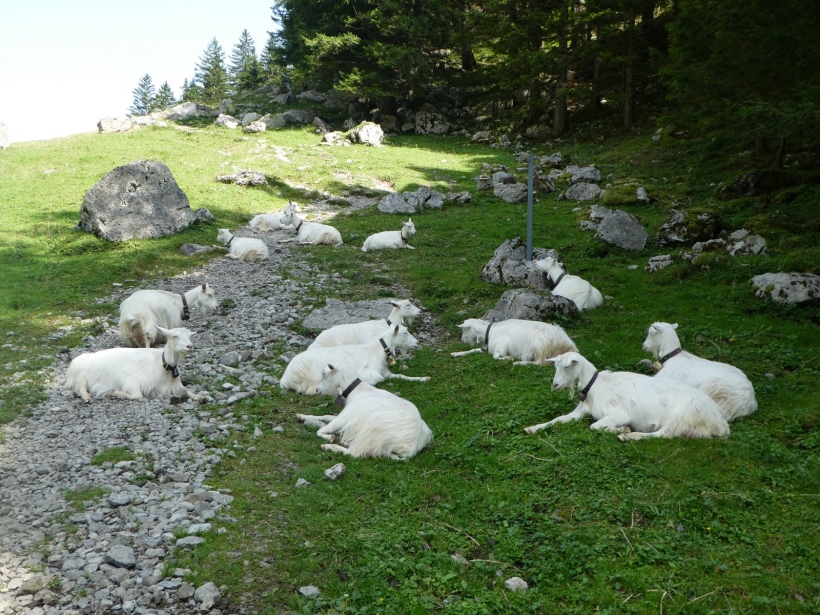 It was a pretty long way around the lake  and people were  swimming, fishing, building cooking fires, and generally having a great time.  There were a lot of people here today probably because it is a Saturday. I took a photo of Berggasthaus Seealpsee where we are staying from across the lake. 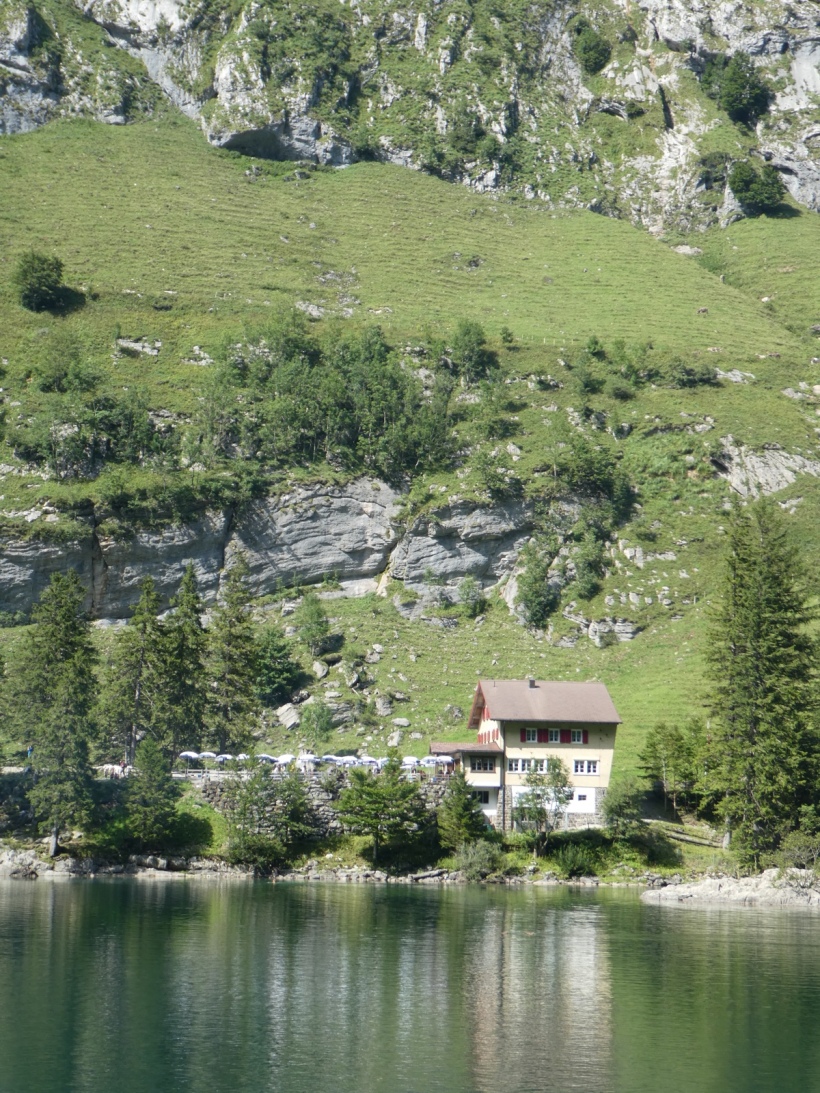 Today I took my 3rd gentle, pretty graceful fall.  I did a great roll which Shirley rated a 9.  No injuries so all is well.

Shirley looked up and saw Ascher Cliff way off in the distance.  Using the 30 times optical lense on my camera, I captured this kind of blurry photo with a hang glider in it. 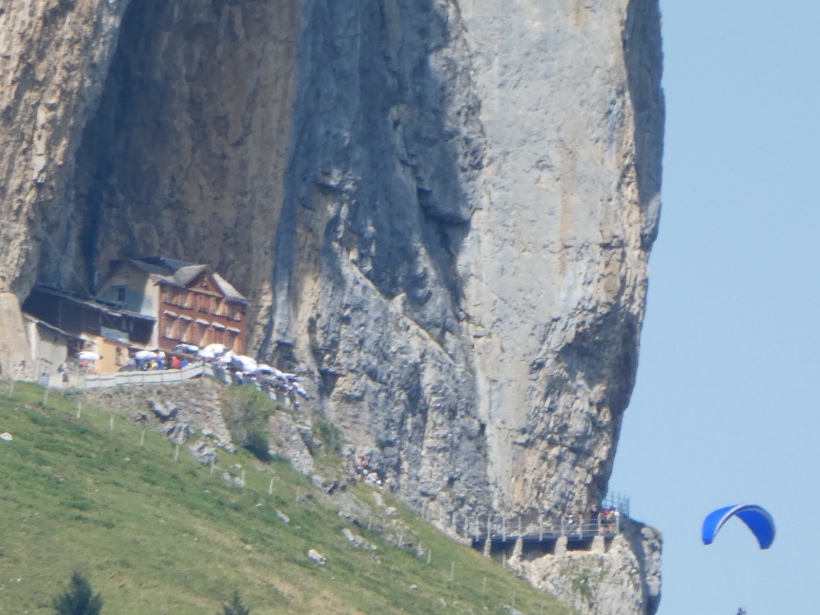 It was fun to see it again even from a distance.  Getting back early enough to shower, enjoy another ice cream, and relax  while uploading photos, shrinking them, and writing this post  has been absolutely delightful. 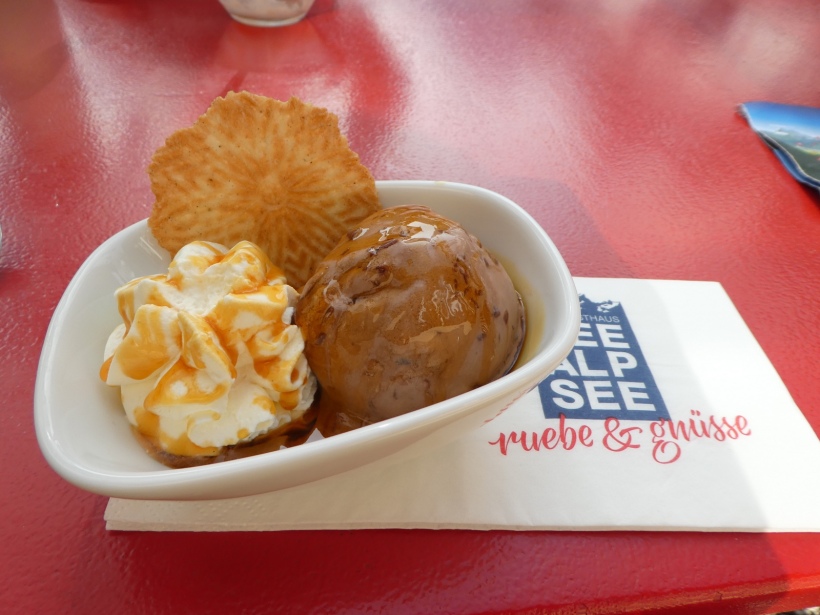