I am writing this post several days after returning home to Oregon.  It has taken me several days to get back on the Pacific Northwest time clock.

We drove into Reykjavik early in the morning on the 26th and took our luggage to the AirB&B where we were staying. 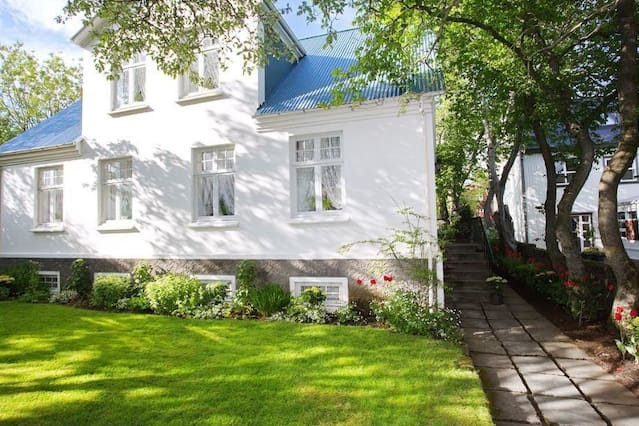 It is a lovely home with 100-year-old pine floors, a nice kitchen, and a place to sit at a dining room table. 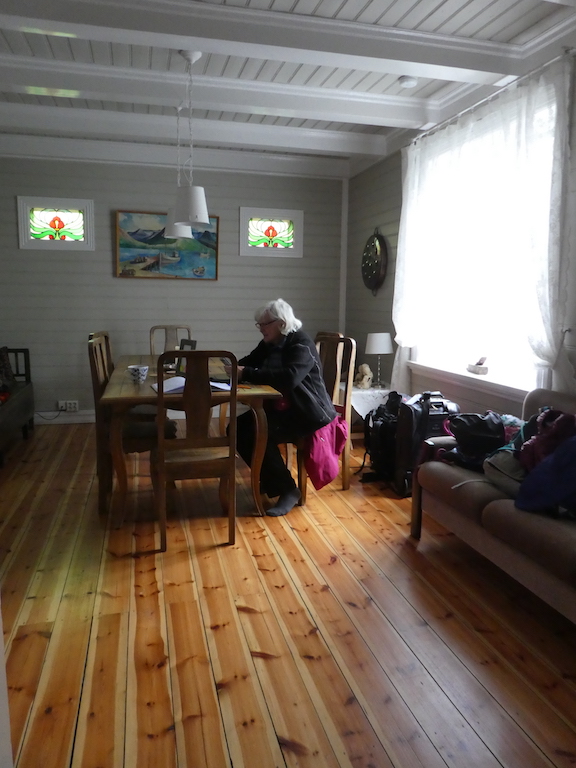 What a pleasure to actually each have a bed of our own.

Finding the van rental place took a bit of an effort.  I told them all about the dent in the side of the camper and gave them the young women’s information.  It did take a long time to go over all of the paperwork, but everything worked out great.

Then we had to get the 1st cash withdrawal from an ATM (less than 10 ISK for both of us) in order to take the bus back into the city.  Traveling for 15 days without getting any cash has been great.  After we found the bus stop, Elaine checked out the schedule. 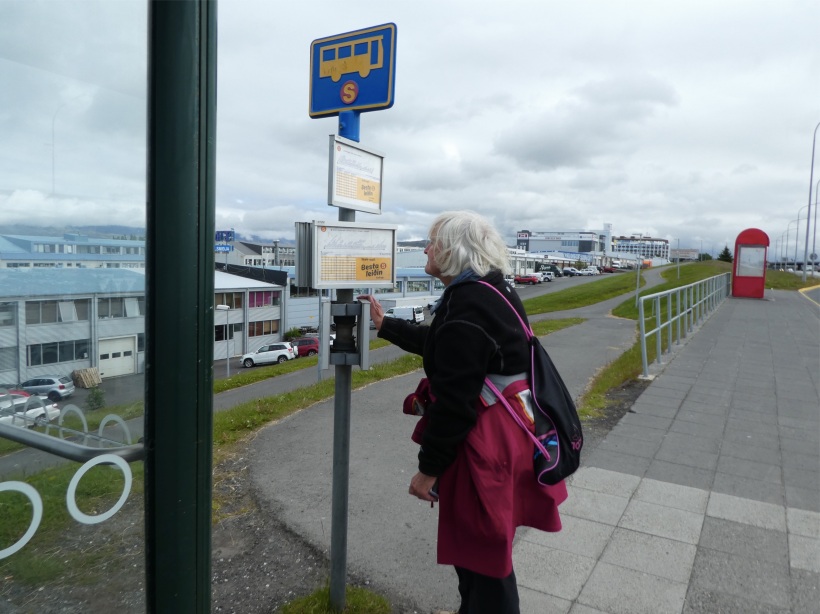 We stopped at the tourist information office in Reykjavik; register for the free walking tour; and bought our bus pass to get to the airport on the 27th..  The young woman told us about places she would choose to eat in town.

We went to Mandi’s for lunch. 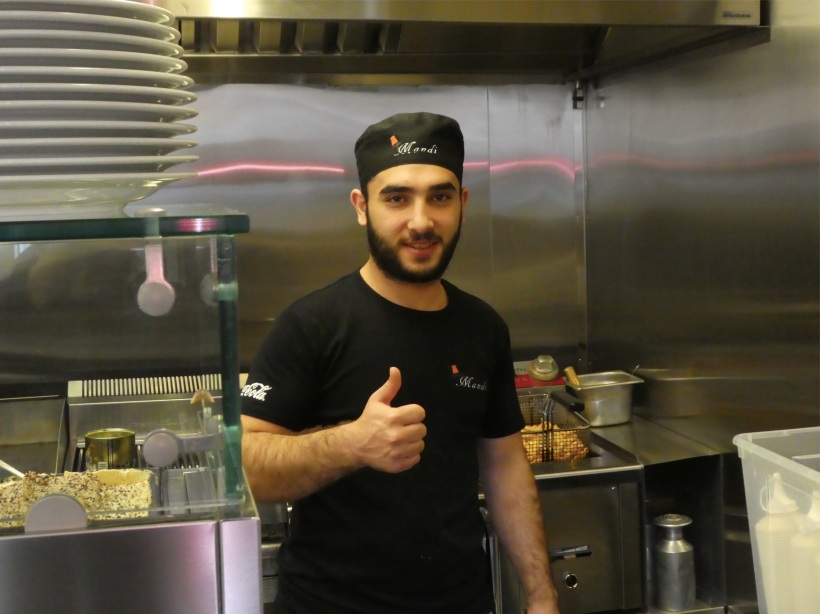 It was a great choice.Elaine and I shared a falafel wrap and a lamb wrap.  Both of the were very delicious.

We wandered around the city for a while.  I liked the signs on the windows of this bar. 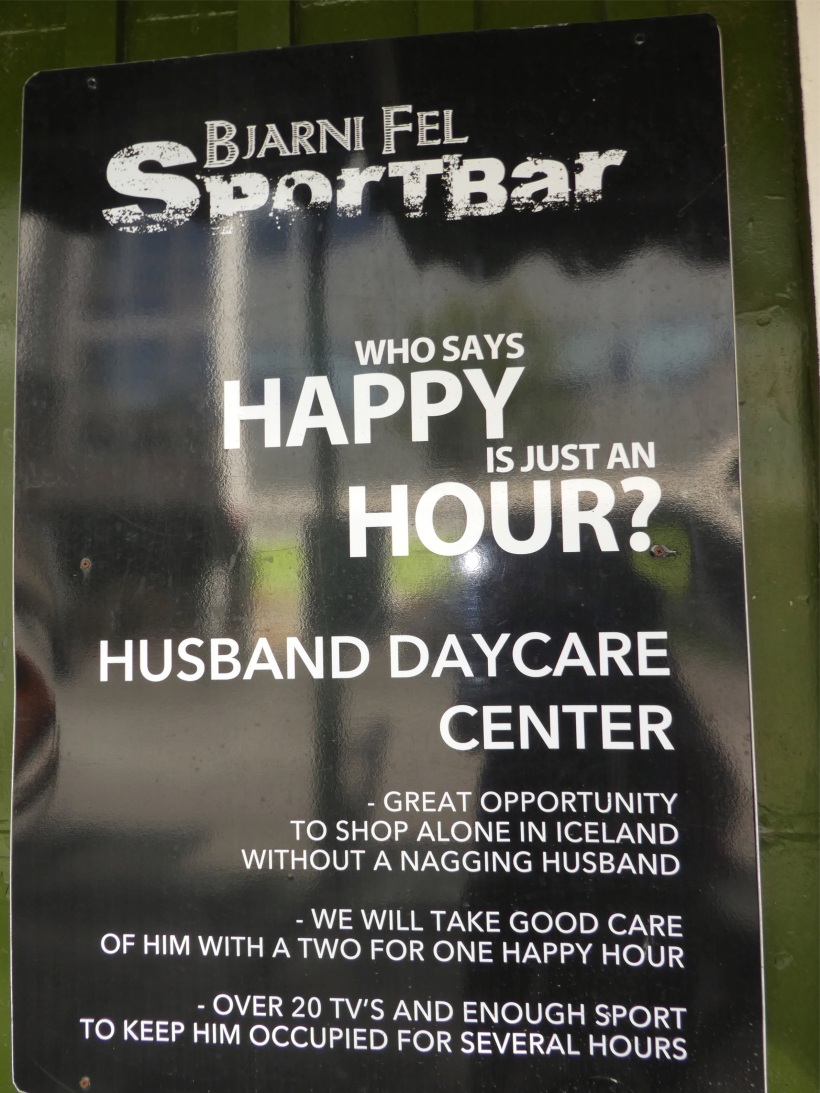 We found our group tour with  Jóhannes as our guide. 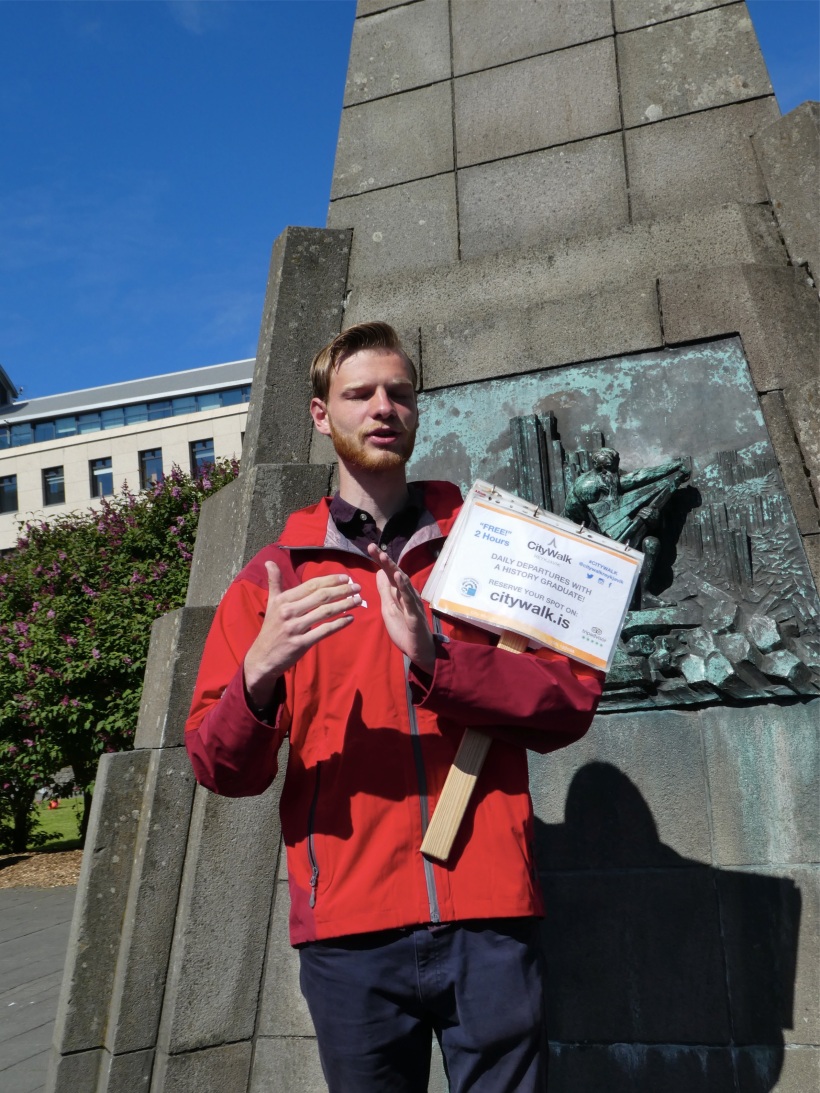 I usually don’t like tours, but this one was great.  He had a wonderful sense of humor and was very informative.  I wish I could remember all of the things he told us. 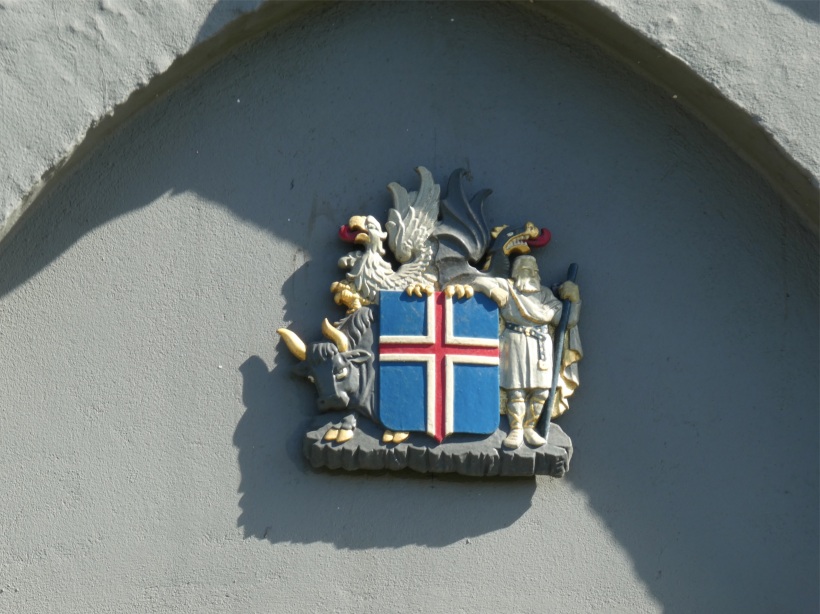 There is an orange soda drink inside this mitt which is designed to keep the drink cold and my hand warm.  I enjoyed drinking the soda. 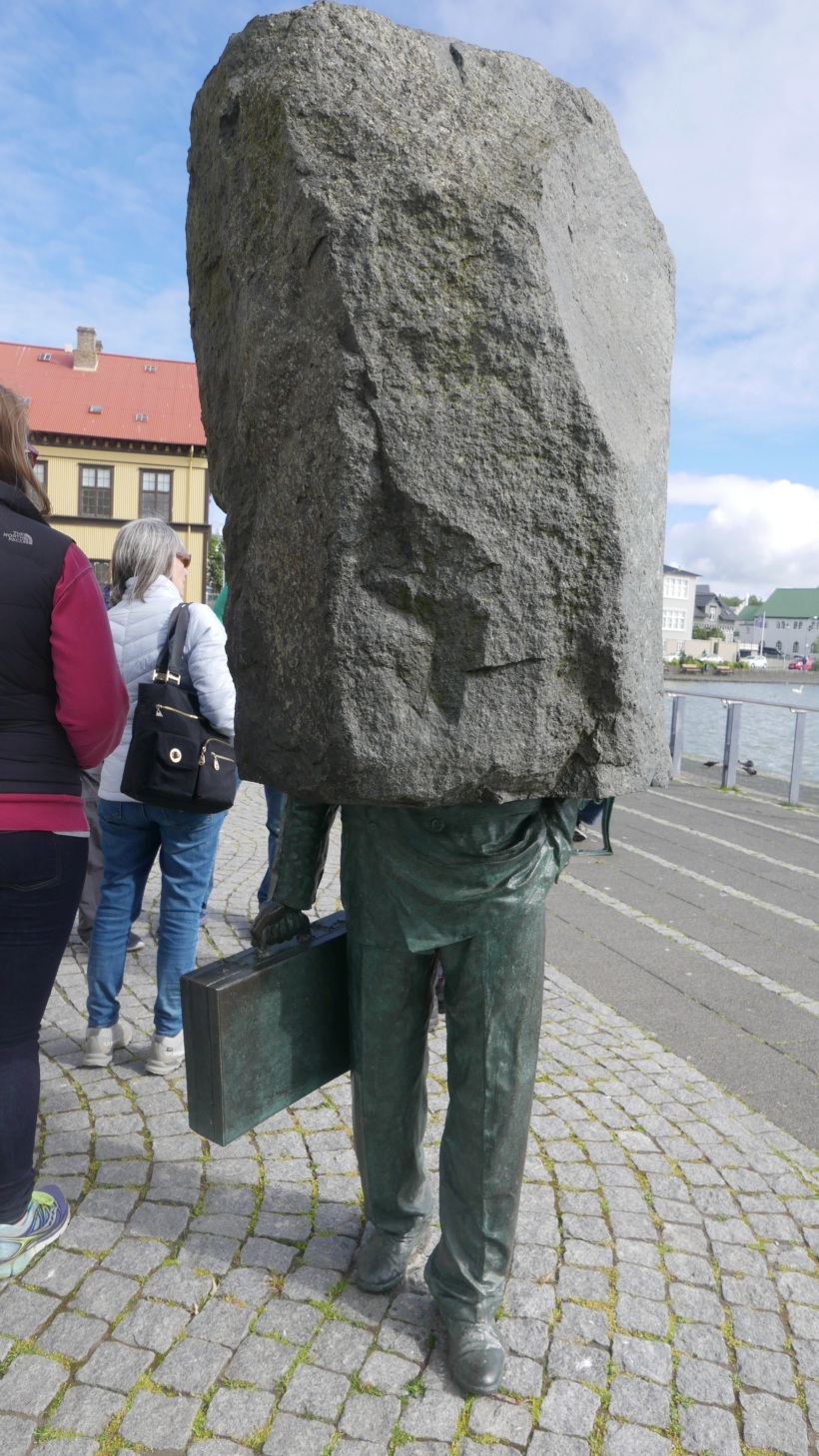 Jóhannes told us so much more information, but I don’t remember the rest.

After our tour we explored Reykjavik and found the restaurant that was suggested for dinner.   It was called Sægreifinn – The Sea Barron.  We ate lobster soup and way too much bread.  After dinner we found the ice-cream store, Valdis.   I had a double scoop of ice-cream.  This was actually only the second time I found hard ice-cream in Iceland.  All of the other ice-cream places had only soft ice-cream.

Elaine discovered that there was going to be music at noon at Hallgrímskirkja.  So we walked to the BSI where we were able to store out suitcases and headed back to the church.

Located atop Skólavörðuholtið hill, it towers over downtown and giving its striking presence to the Reykjavík skyline.

Skólavörðuholtið is 745 meters (244 feet) tall and is the tallest building in Reykjavík, the second highest building in Iceland.  The church was designed by the State Architect of Iceland, Guðjón Samuelsson in 1937, after years of discussion about where to build a church named after and in the honour of Hallgrímur Pétursson, one of the best known poets of Iceland. However, the war delayed the start of construction, which only began in 1945. Work proceeded slowly, as the church was a monumental undertaking. The crypt beneath the choir was constructed first, being consecrated in 1948. The steeple and the wings were then consecrated in 1974, while the construction of the nave was only completed in 1986.

The organ in the church is beautiful  I wish we could have heard it.

A woman we were sitting near pointed out that the foot in each of these art depictions seems to be stepping out of the frame. 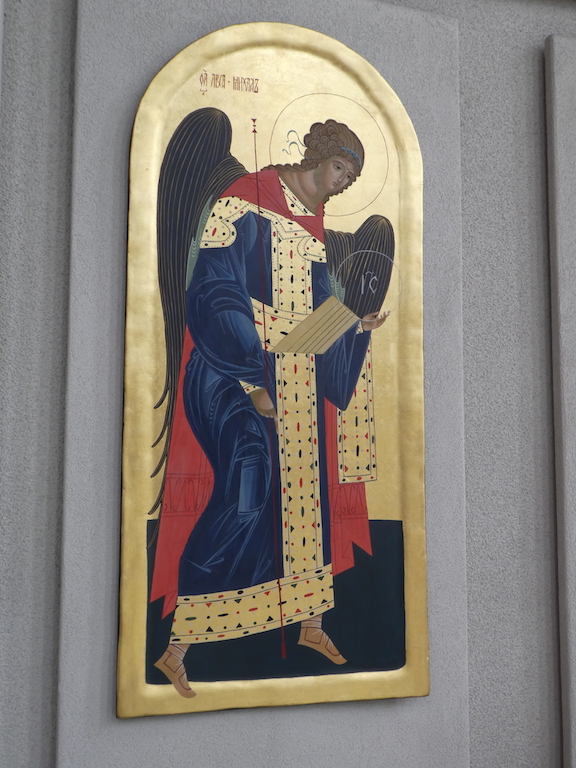 We felt very lucky and thoroughly enjoyed hearing a wonderful choir performance by Schola Cantorum, as our last experience in Iceland.  The acoustics in the church were fabulous.

After the performance we were invited to have tea/coffee and treats so we could meet with the choir members.

Elaine and I had a fabulous time in Iceland.  We spent 15 days exploring and definitely could have spent more time.  The campervan was a great idea because it gave us the flexibility to choose each day were to go and how much time to spend in each place.   Traveling with Elaine was so much fun. Perhaps I will return one day to see the Westfjords.