We took the bus in the morning to Landmannalauger. Landmannalaugar is the northern end of the Laugavegur hiking trail. The Iceland Touring Association operates a mountain hut with sleeping bag accommodation for 75 people and a public toilet with showers. During the tourist high season there is also a small shop there that sells coffee and basic groceries, Several bus It was really hard to choose the photos I wanted to upload.  Each moment on our hike was awe-inspiring.  This place is so spectacular and each of these photos will hopefully bring back the memories of how happy I was each moment as I took-in the scenery all around me.  The range of colors was so amazing. 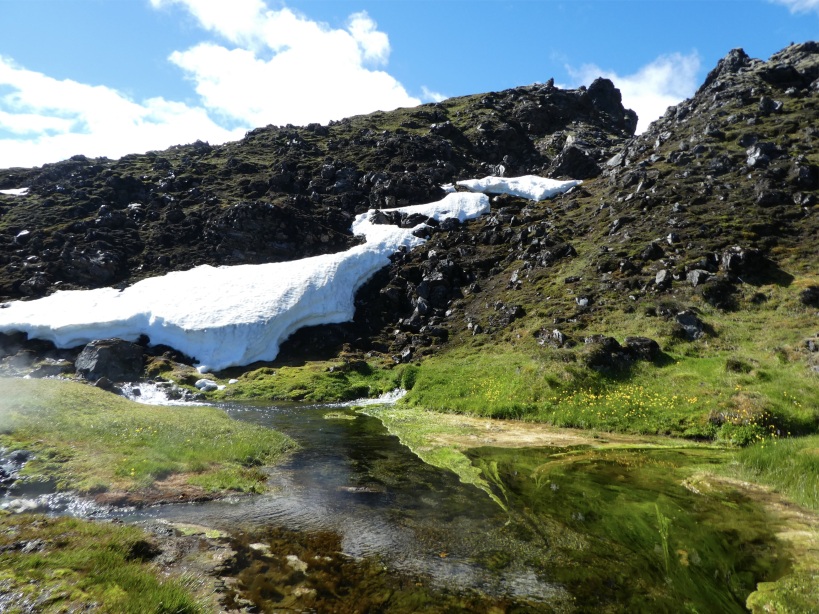 It was pretty cold when we started so I was bundled-up with many layers of clothing.

We walked mostly in silence just appreciating the views. 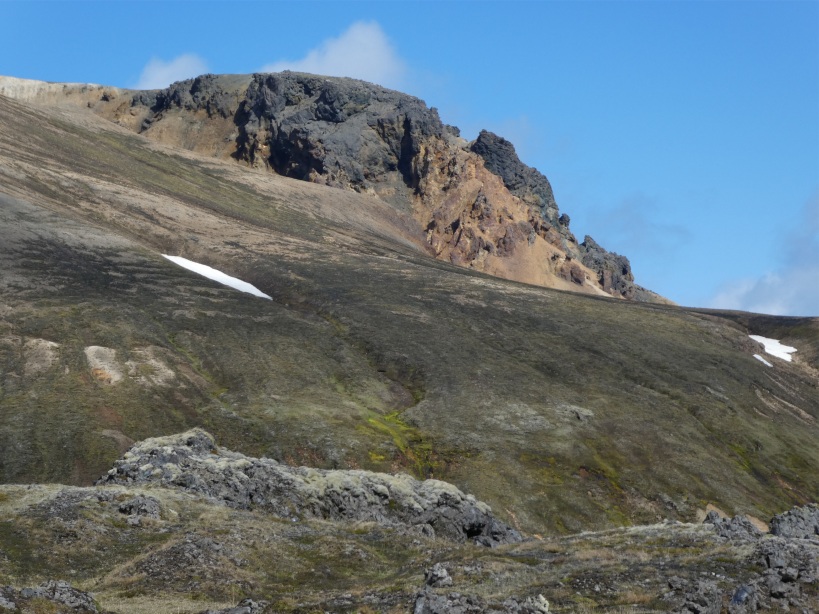 This is just one of the obsidian rocks. 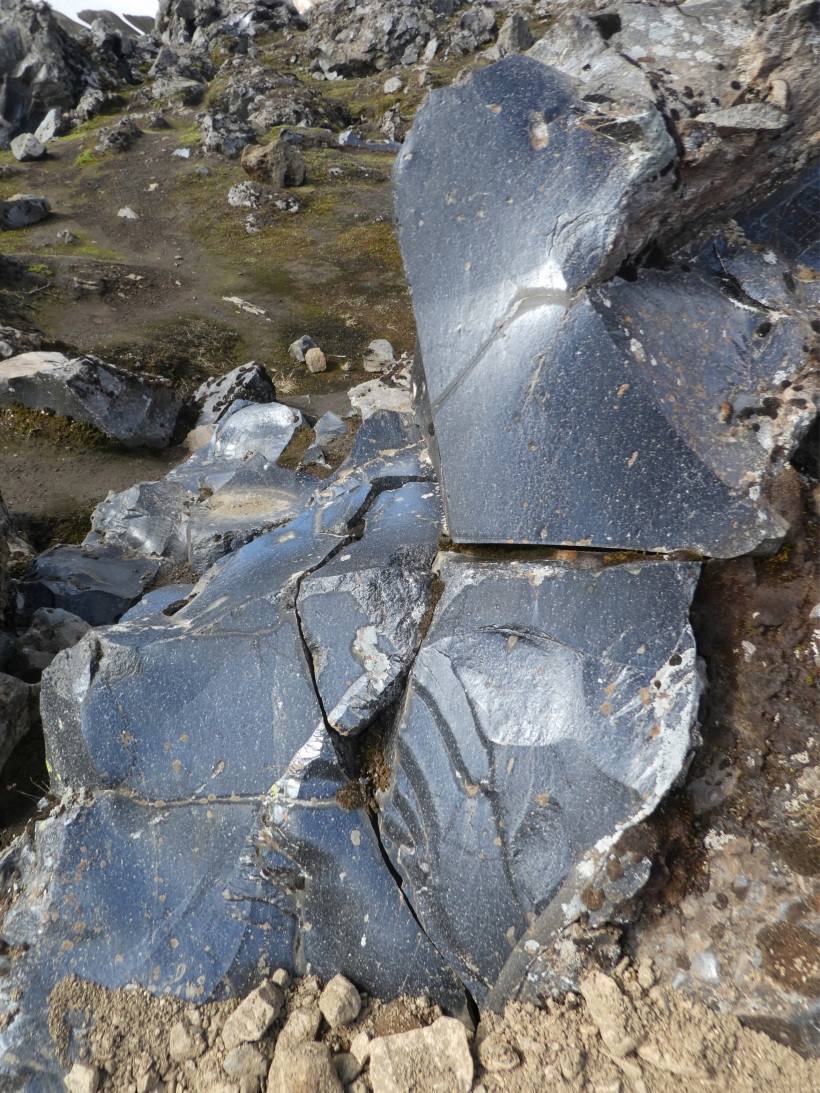 The colors of the mountains defy description. 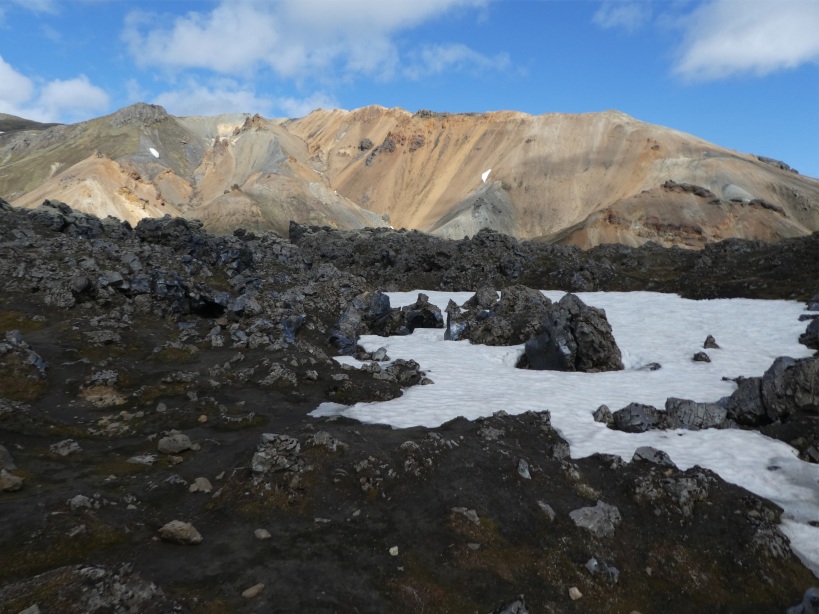 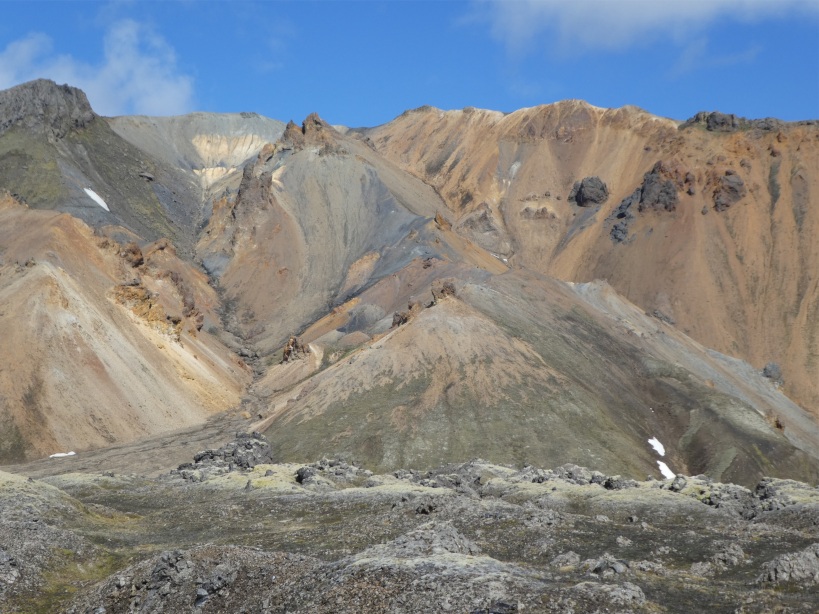 The streaks of snow enhanced the beauty of the mountains.  By this time the weather had warmed up and my jacket was now stored in my pack. 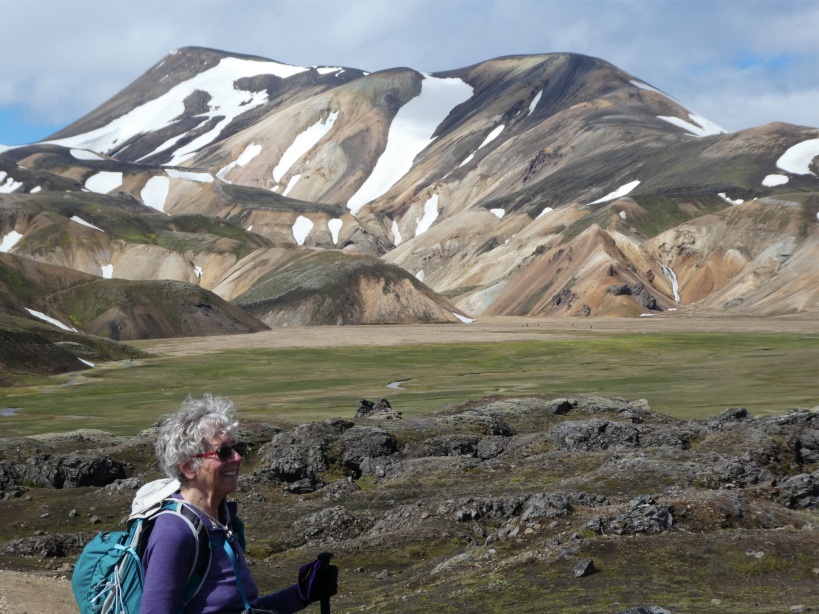 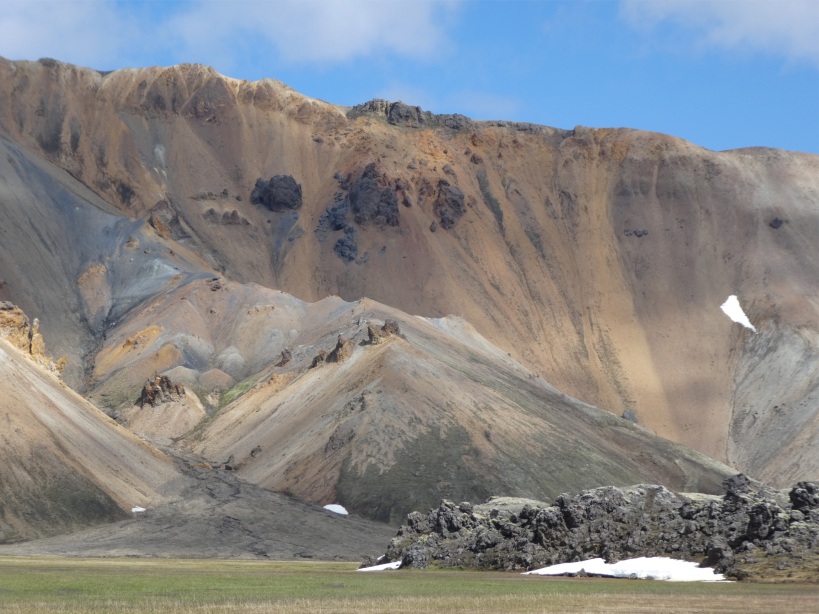 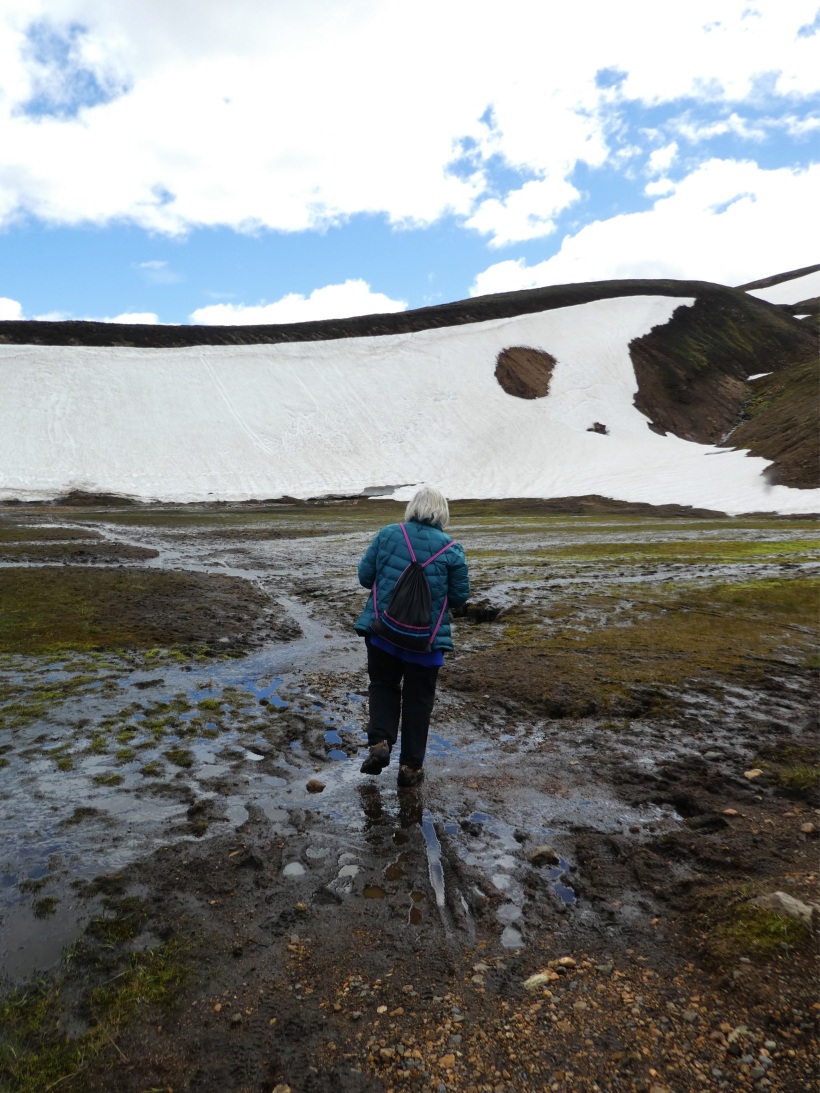 … and found it easier to walk through the snow in some places.

I love this purple plant. 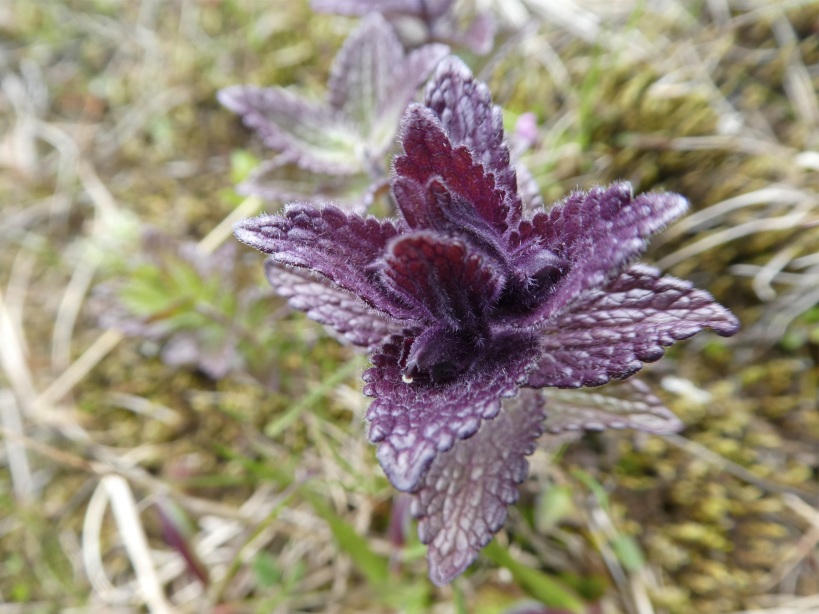 We sat down for a snack and this Frenchman came along.  I think he said that his name was Gracie,   It was a lot of fun talking with him as he practiced his english with us.

I love this red rock.

As we were walking along one of the narrow rock filled paths, a group of bicyclists came riding over the rocks.  We met up with them again later on their way down from the top; 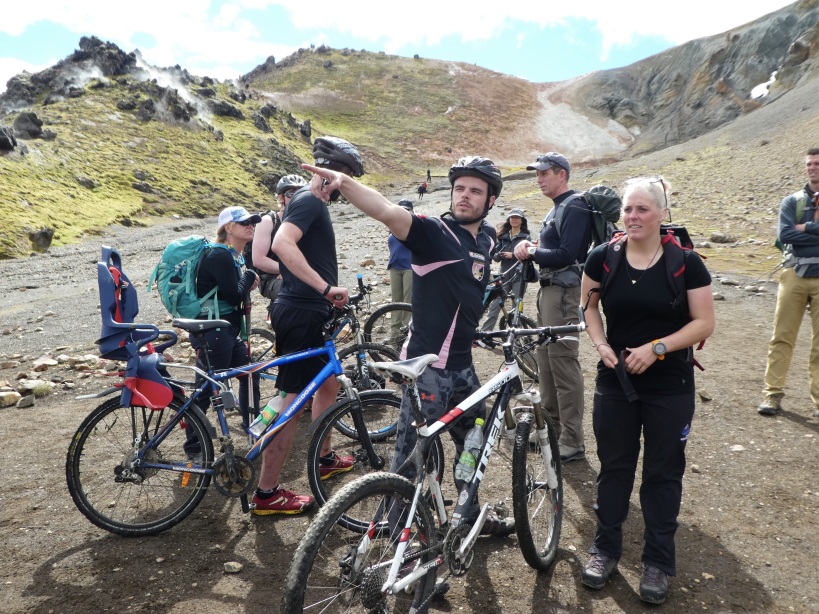 In one area there were many places where the sulfurous steam was spewing out form the ground and we were engulfed in it.

Elaine did manage to get a bit clearer photo of me as it blew in a different direction.

I continued to walk a bit higher and Elaine waited for me.

I just wanted to get up to this rock formation.

On  my way back down I noticed that Elaine was covering her head to protect herself form the sun.

More steam coming from the ground.

On our way back we walked to the edge of the lava and saw this wonderful creek rushing down through the valley.

It became calmer at the bottom. 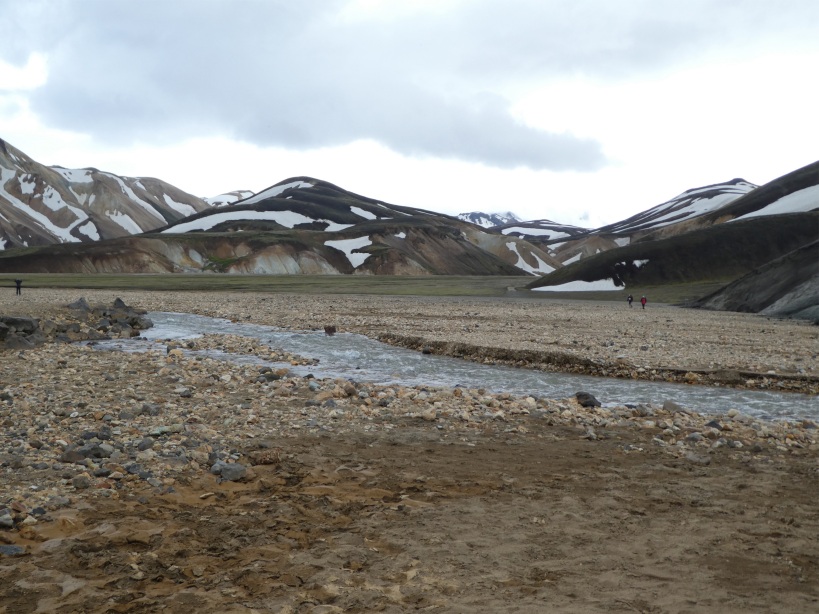 When we returned to camp we retrieved our bags and headed to the lodge where our beds were (along with the other 75 to 80 people.

We were glad to have been assigned to a room on the first floor so it would be easier to go outside to the bathrooms in the middle of the night.  The room reminded me of the Camino.

After dinner we walked around camp and I bought a deck of cards.  I taught Elaine to play Kings in the Corner.  Then we taught the people sitting next to us.  We had fun playing cards before we went to sleep.

In the morning Elaine took a photo of me eating some of our standard food (peppers and crackers).  We really didn’t cook much.

This is a photo of the many tent campers early in the morning.  The majority of them were going backpacking (hut to hut).

Campers used the clothes line in the bathroom to dry their clothes. 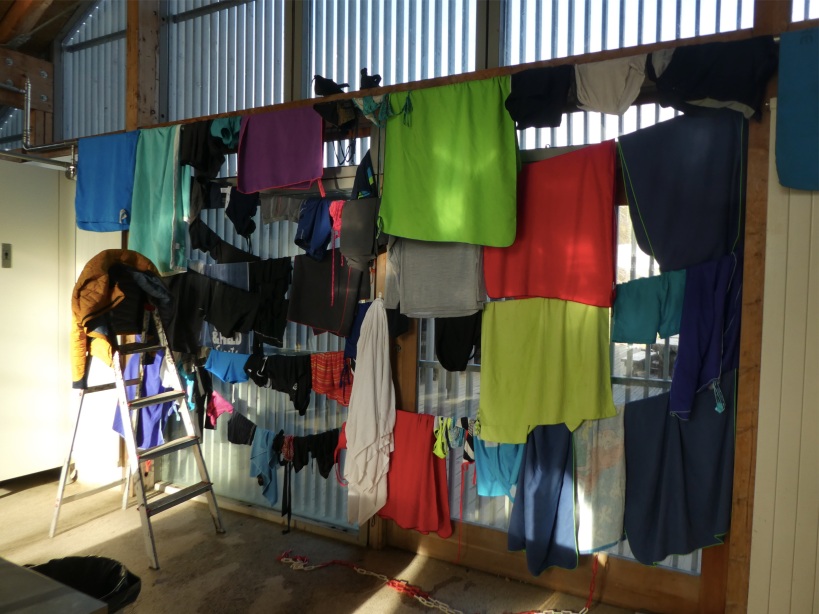 This is on of the places that the tent campers ate.  In this photo there is only one person eating at the table but usually it was very crowded.

I took a walk back to the pond where people had been bathing the day before.  The next two photos are of Redshanks that I saw near the hot pool.. 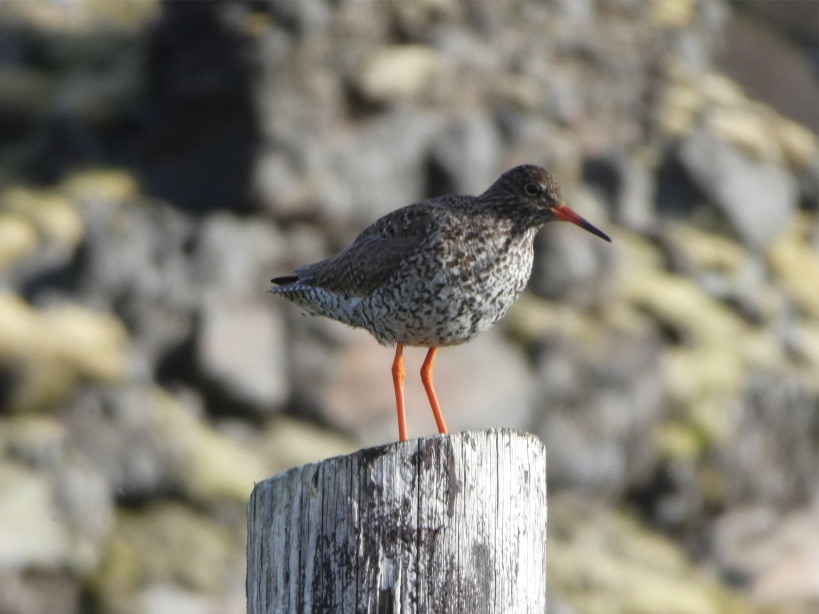 The water in the pool was calm.  What a beautiful place to bathe even through I still decided not to partake.

Here is Elaine taking a photo of our breakfast.

This is our well equipped kitchen.

Before our hike, we had to re-stuff the garbage bags with our sleeping bags so we could store them when we went hiking

We crossed the bridge where our bus had driven through the water yesterday and saw this sign.

This was the crossing. 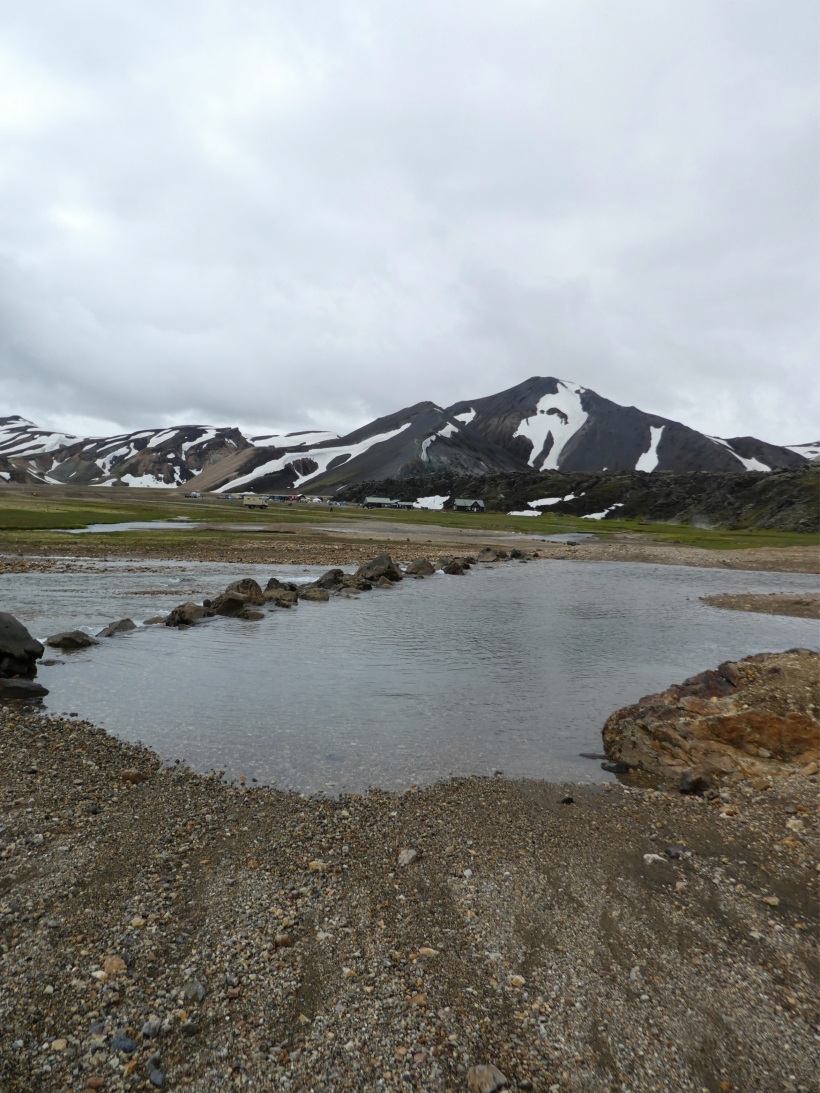 These ducks that were in the water are called Herlequins.  They sure are beautiful. 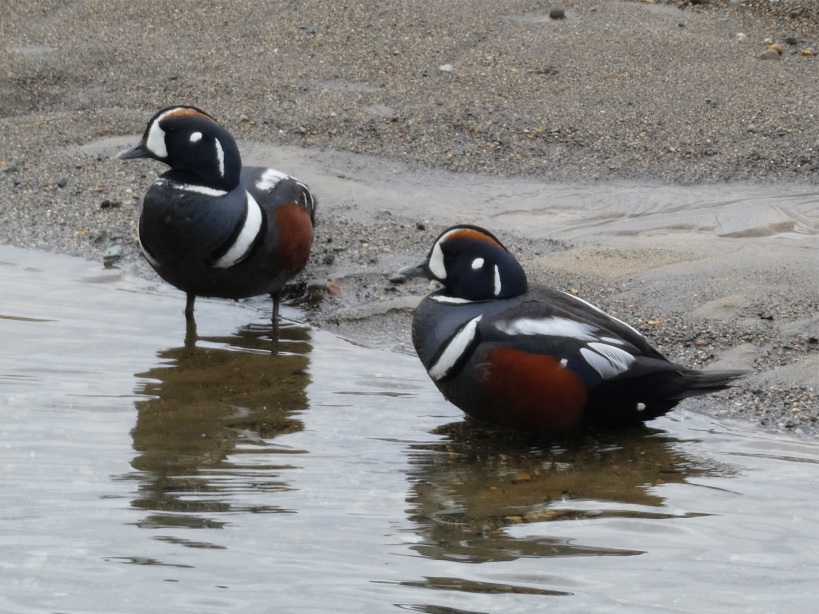 Here is Elaine coming up the narrow very slippery path on one of our morning hikes..

The view from the top was great. 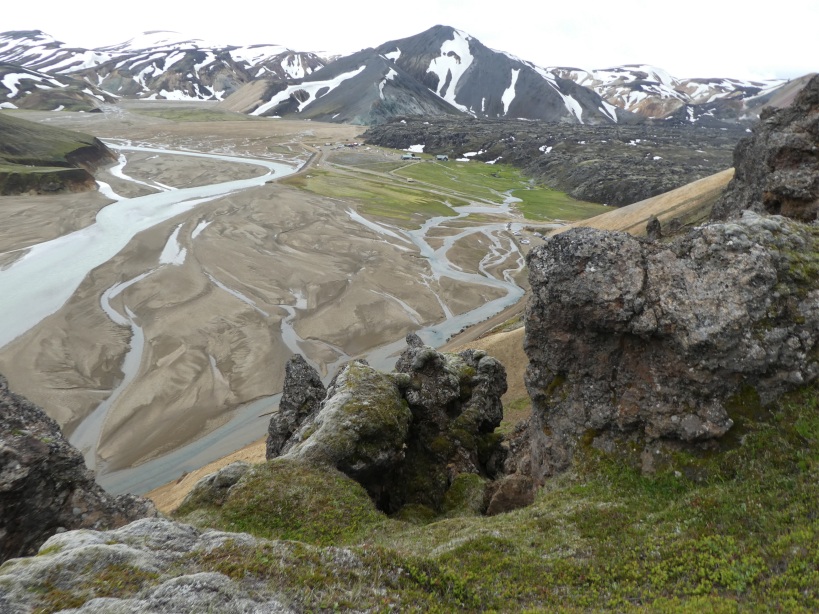 It was really pretty steep coming up but we finally got a view of the lake. 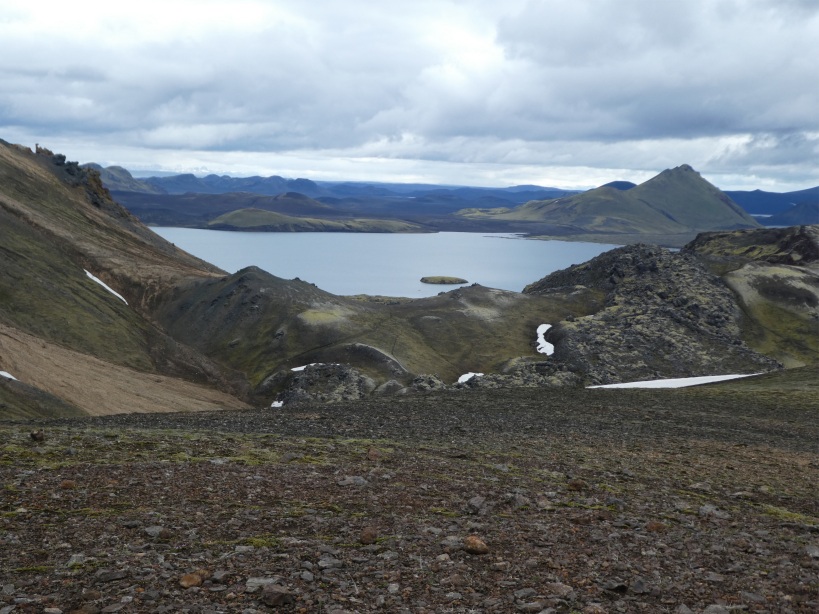 This is the top of where we hiked on the first hike. 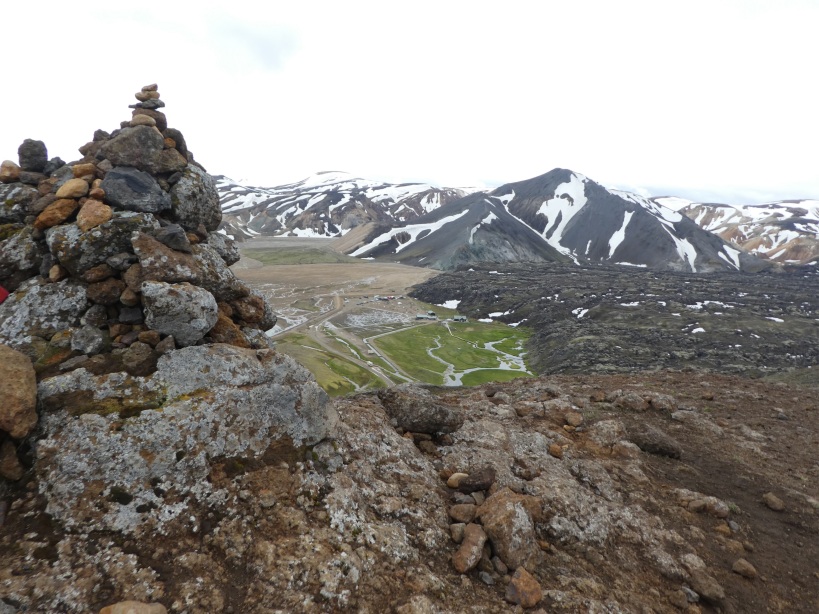 The views were again spectacular, 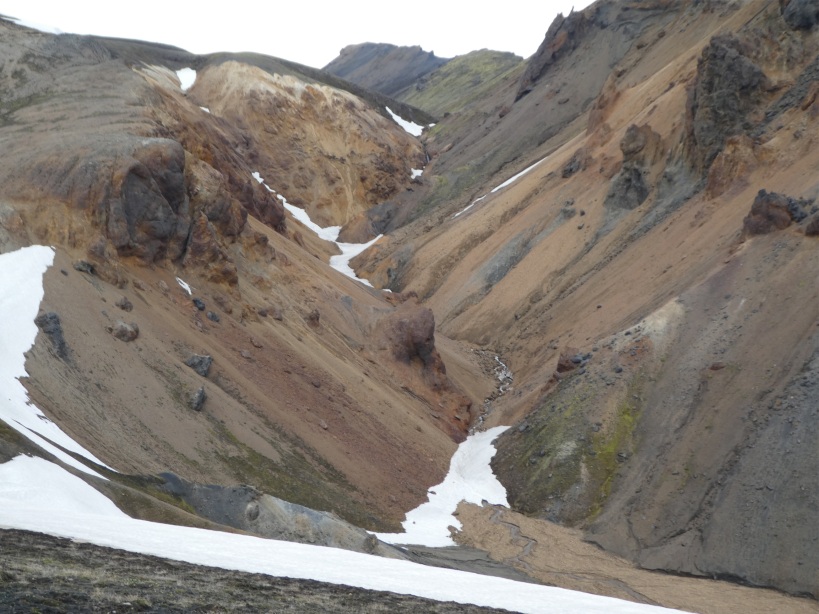 It was not easy getting a photo of this ptarmigan.  It moved pretty quickly through the field.

I love the streaks of snow contrasting with the mountains.

We could see down into the camp.

What a great rock.

I loved the flowers.

Eliane decided to wait for me as I tried to get to the top to see the lake from the other side.  It was really hard work because we were in a hurry. 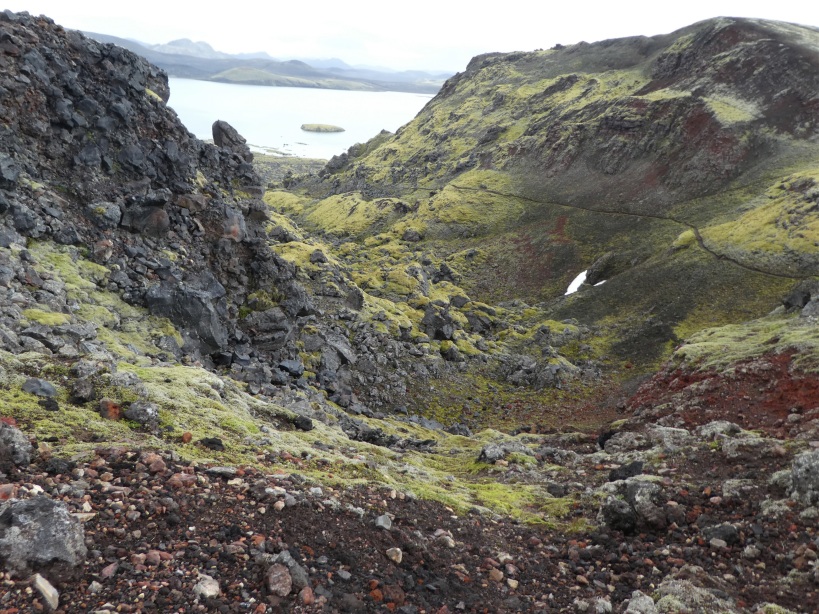 This photo does not show the actual color of the red rock on this trail.

Right before we boarded the bus to go back to our camper-van I took a photo of two of the people we met.

Joanna and her father, Peter Fischer, are traveling all over Iceland on their tandem bicycle.  Peter has traveled solo through many, many countries.  I was reminded about Bob Voris and I traveling 1500 miles in the U.S. and Canada on our tandem in 1981, but our roads were not these difficult gravel, pot-holed roads and not shoulder roads they are doing in Iceland. 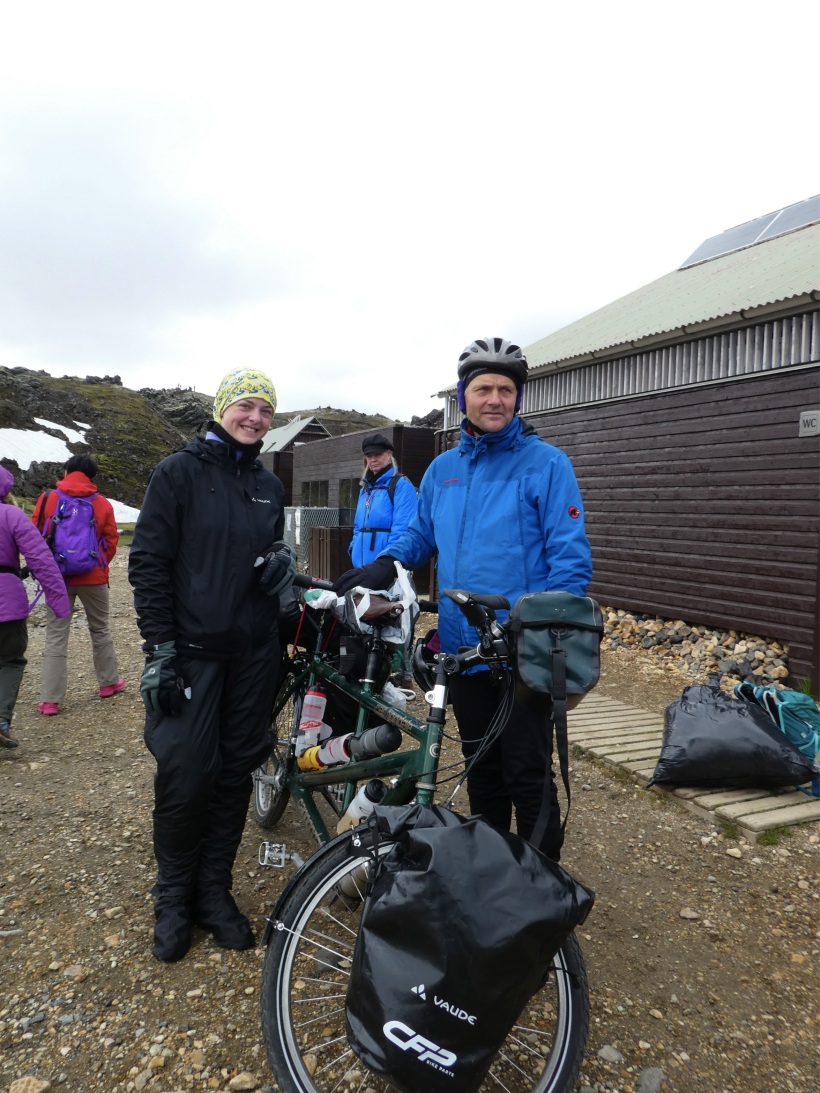 This is our  bus that we took back to our camper-van crossing the river same river we crossed on the way to Landmammalauger.

The water was even too deep for some lower 4 wheel drive cars to cross.  Much of the  road up before this river crossing is an F road.  We heard that there are plans to possibly improve the road to Landmannalauger.   This would be a terrible idea.  The facilities at the campground seem to be just enough for the many, many people who get there now.  Elaine and I think more people would create such a tremendously negative  impact on this pristine environment.

We decided to drive to Reykjavik and stay at the city campground.  We ate dinner at Floren Café which had lovely gardens.  The smoked salmon quiche and salad were wonderful.

After dinner we sorted through our stuff so we would be ready to turn in our camper-van in the morning.  I discovered that I had lost my charger for my iPhone – not sure how I had left it in Landmannalauger.  After freaking out a bit, I decided to walk over to the city pool which is called Laugardalslaug.

Because I am over 65, the pool was free, but I had to pay 55 ISK to rent a towel.  Silly me just didn’t want to get my travel towel wet so I left it in the van.  There were 5 hot tubs ranging in temperature from 38 celsius to 44 celsius.  I had such a good time talking to the people at the pool.

The campground was only about 200 meters from the pool, but I was so nice and warm that I asked a man who was sitting in his car to drive m e back. When I got back to the campground, I saw that Peter and Johanna were there.  I was surprised that they arrived so quickly.  But it turns out that several spokes on their tandem wheels had broken and they did not have enough of them to replace them.  So they had to leave the tandem at Landmannalauger and take the bus to Reykjavik to buy more of them.  I think they have 2 more weeks of travel ahead of them.

I tried to write this post last night but too many people were using the wi-fi in camp for me to upload the photos.  But I had a wonderful time talking with a group of  people from Ukraine and Poland who were on their way up to  Lanemannalauger to hike for several days.  One of them helped my charge my phone with his charger and reminded me that I could us the USB port on my laptop for charging.

These 2 days have been such a highlight of our trip and an incredibly wonderful way to end our camper-van experience.