When we got up this morning, we walked around the area to look at the waterfalls again.  This has been the most beautiful campsite.

We left before we even at breakfast to find the ferry dock to go to Heimæy Island.  After we purchased our tickets, we had breakfast at a picnic bench.

Then we boarded the 9:45 ferry for the 30 minute ride to Heimæy.  The first thing we did to get coffee for Eliane.

The woman who owned the coffee shop was very sweet and gave us books of photos and told us about how her father woke her up in the middle of the night and they evacuated the island.  She told us how to walk up to the top of the volcano.

We walked part way into the lava field when I discovered that I had left my camera at the coffee shop.  So we walked back to get it.  The owner had noticed that I left it and was driving around looking for me. That was so nice of her. I waited for her to return.

I took several photos on the way to the lava field, in the lave field, and on the way up the volcano. 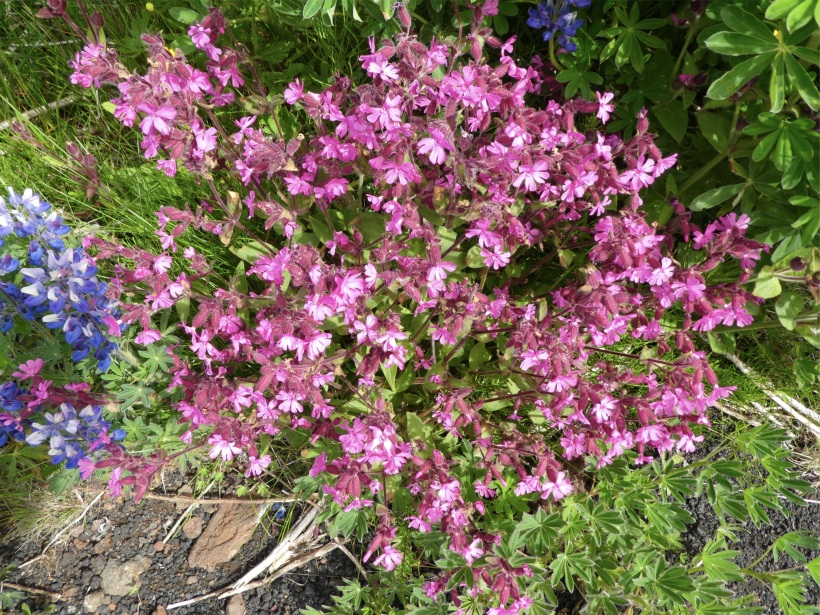 It was quite the hike up to the top.

When we finally reached the top, there was a group of high school students with their teachers.  I asked the teacher to tell me about what had happened because I couldn’t figure out where the crater was.  He explained that it wasn’t a regular volcano.  The earth had just split at a fissure and fire and lava erupted from there.  This is an article I found online.

“January 23, 1973, a previously unknown fissure in the Earth beneath the small Icelandic island of Heimaey opened up less than a mile from the town of Vestmannaeyjar, which had a population of about 5,000 at the time. Within a day’s time, almost the entire island was safely evacuated, and geologists began to monitor the eruption. The newly formed Eldfell volcano erupted for about six months, covering much of Vestmannaeyjar in ash, destroying several hundred homes, and sending lava flows toward the harbor—at one point raising the water temperature to 111° F (44° C).

An enormous and largely successful effort was made to slow and control the lava flow by pumping seawater and spraying the leading edge of the flows. Within a year after the end of the eruption, most residents had returned, and today, the island remains inhabited, with a population of about 4,500.”

I took this photo off of the web. 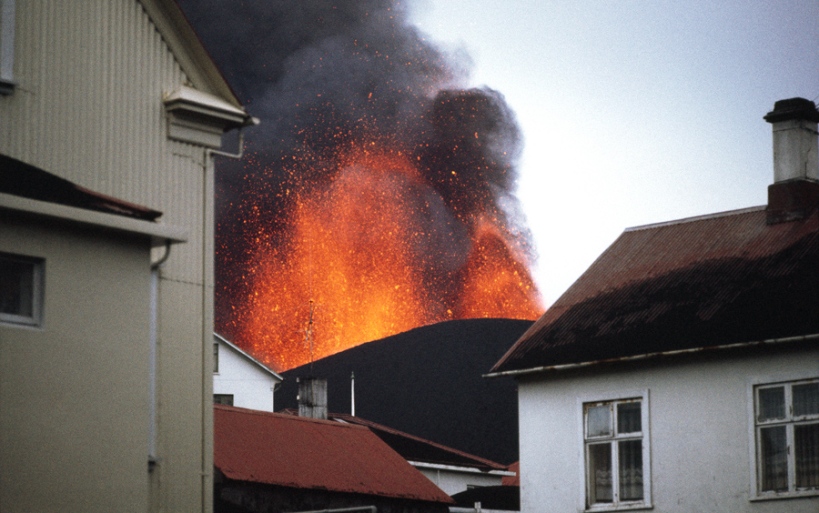 The teacher showed us a open spot and told us to put our hand down into it.

It was really warm in there.  He said that it could erupt any time again.

These are some more photos from today.

The town is below.  The town used to come right to were we were sitting but all of the houses up to there were destroyed.

We walked back down and explored the town before taking the ferry back to Hella.  Elaine and I are so glad we decided to go out to Heimæy Island today.

We are camped in Arhus in Hella tonight.  Tomorrow we are going to Landmannalauger by bus and have to take our sleeping bags with us.  So I am making sure that they fit into the black bags we got from a coffee shop many days ago.

We are camped in Hella tonight.  Tomorrow we are going to Landmannalauger by bus and have to take our sleeping bags with us.  So I am making sure that they fit into the black bags we got from a coffee shop many days ago.

These are all the people who were still having dinner at midnight tonight.

They have all gone to bed and I am just finishing my post.  I am now all caught up.  No posting for the next couple of days when we are out hiking.  Hoping for good weather.