There were many beautiful sights on our morning drive.  I love the farms in the distance and the glaciers. 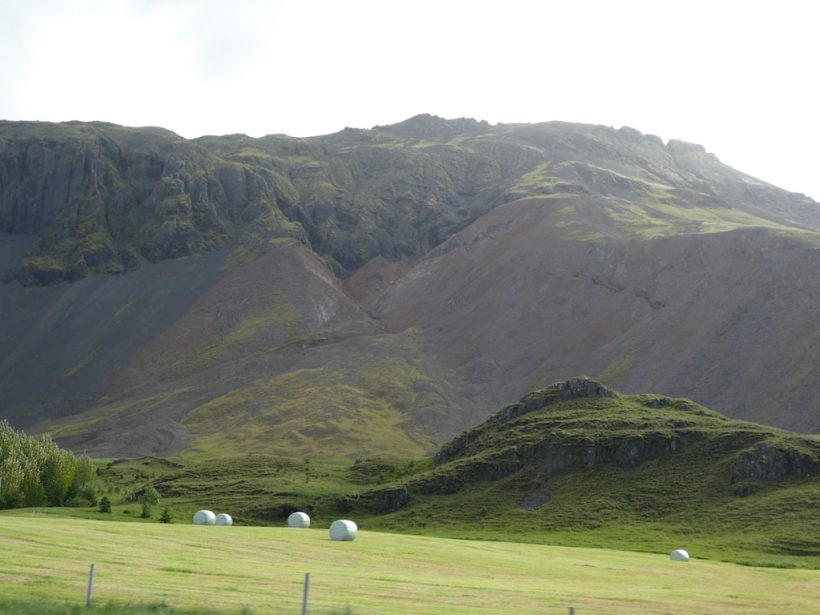 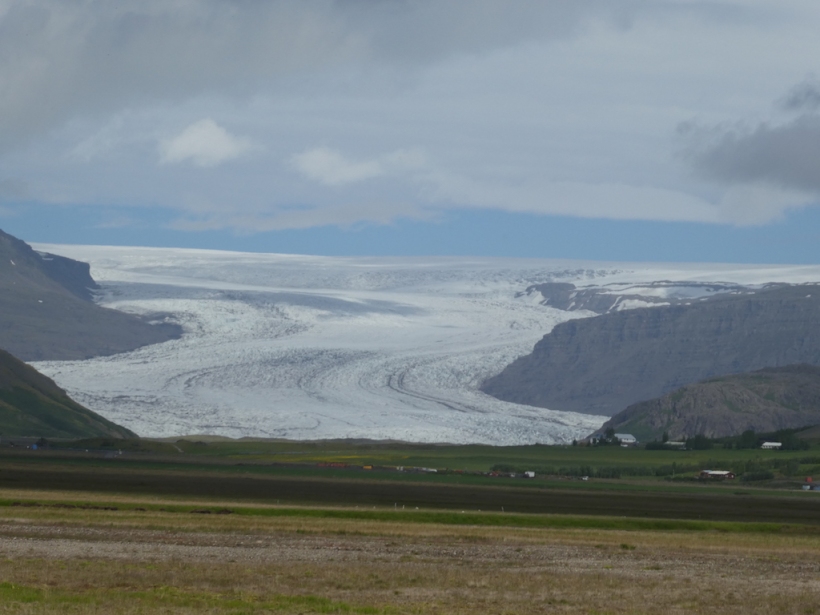 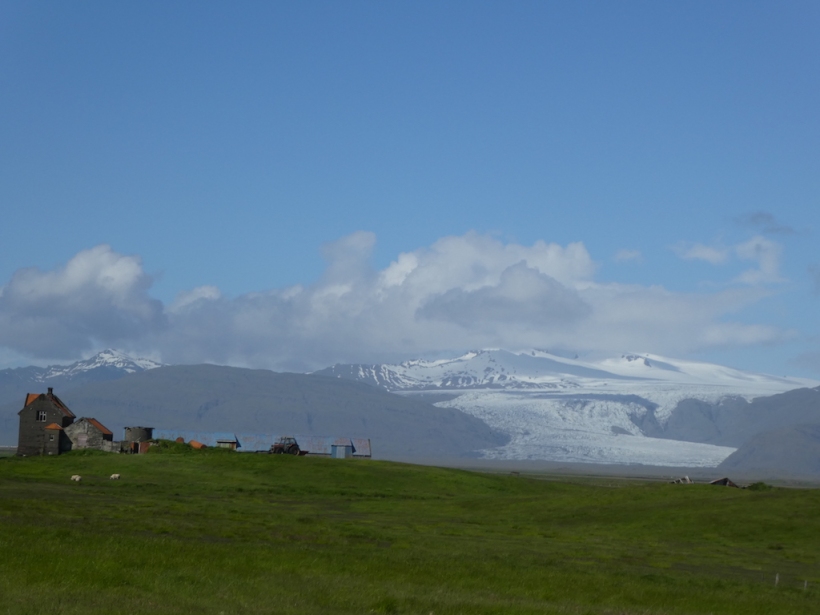 The old abandoned farms are my favorites. 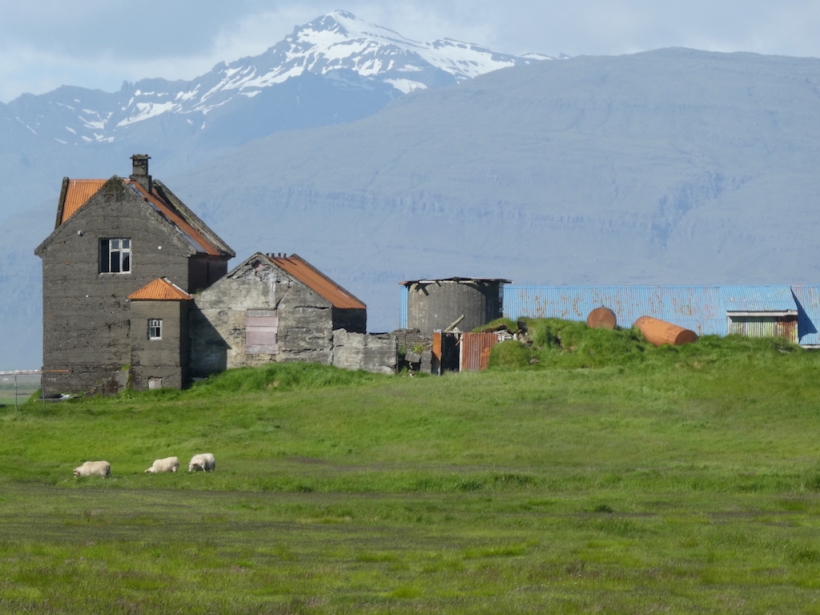 Our first stop today was to see Iceberg at Jökulsárlón which is a large glacial lake on the edge of Vatnajökull National Park.  The parking lot was crowded and some people were lined up to take a boat into the lake to see the icebergs.  After Antarctica, these icebergs just did not grab my attention. 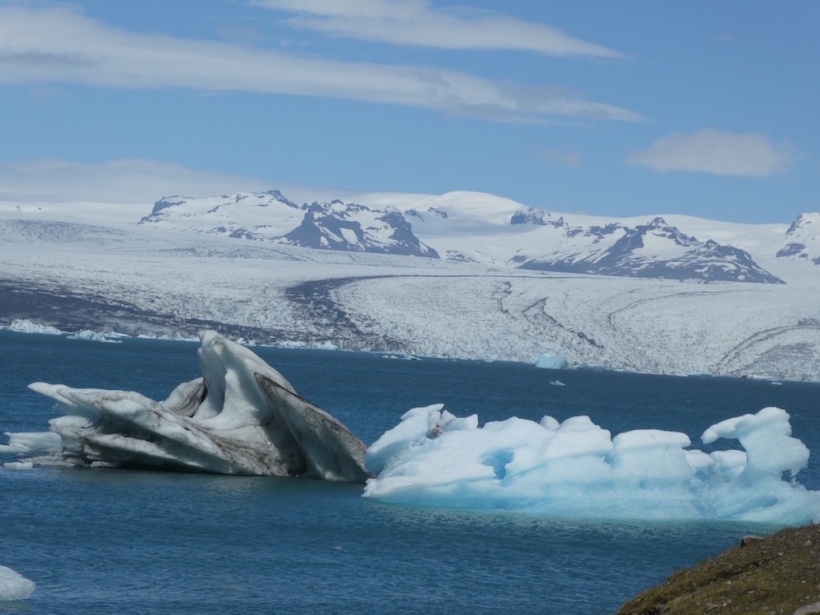 From there we went to Skaftafell.  It took a very long time to find a parking place.  We went back and forth between the two parking lots before we found a spot.  Skaftafell is a wilderness area in Iceland’s Vatnajökull National Park. Its huge glaciers include Skaftafellsjökull and Svínafellsjökull.  We took a short walk (about 3.8 km) that was self guided.  One of the numbered spots had information about tufts.

In the above photo the large boulder at the bottom of hillside fell from the hill behind it.  It is called tuff and was formed when a volcanic eruption took place under water, including under glacial ice.  When the rising magma came into contact with cold water, it cooled instantly.  Steam explosions hurled bits of the material, called ash, through the water and even into the air.  Over time the ash consolidates and hardens into what is called Tuff.

There were several waterfalls along the way. 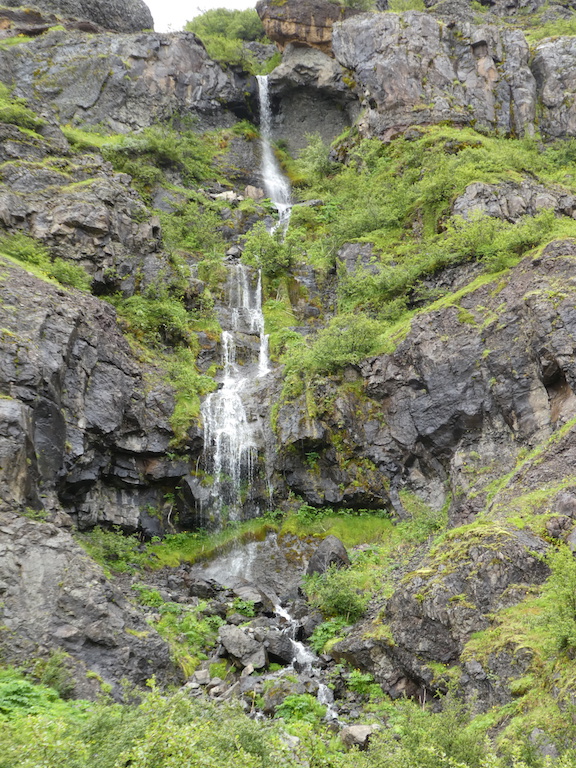 There were ravens up on the cliffs. 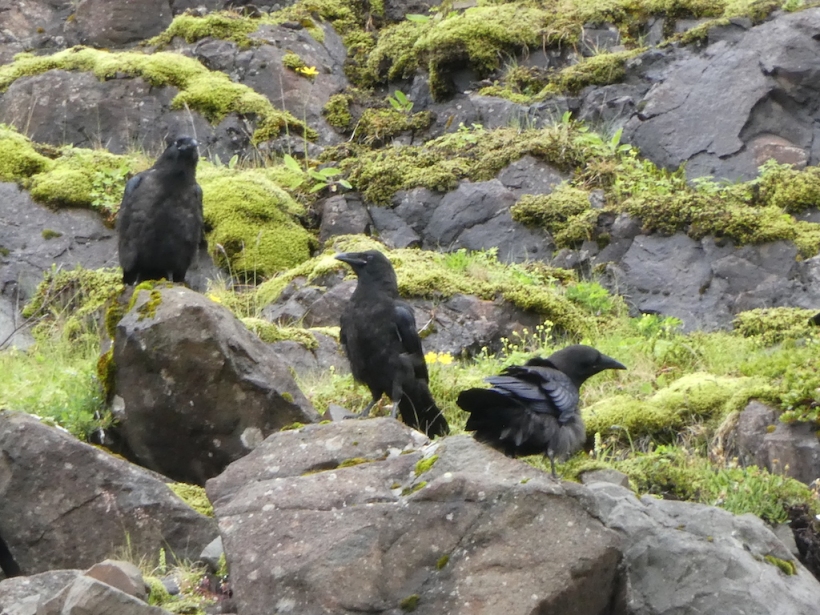 Along the way we learned about how far the glacier has been receding but I lost the pamphlet.

It is hard to believe how many layers of clothes I have been wearing on many of these days (wool tank top, long sleeve shirt, wool long-sleeved shirt, down vest, and my Antarctica jacket with a buff and hat on my head and gloves on my hands.

At the end of the walk was the large glacier but we didn’t walk all the way up to it because it.  It was very windy and cold. 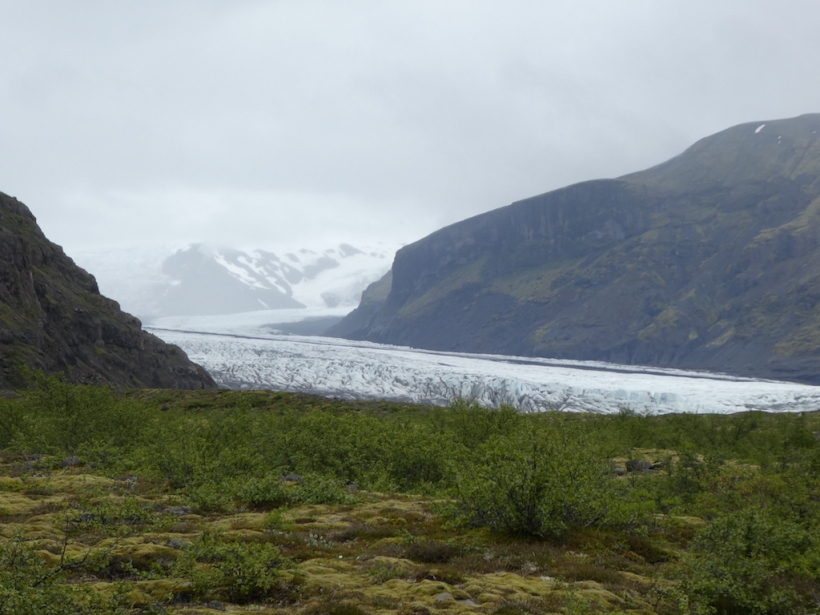 I liked the color of the moss on this rock.  It is very spongy.

Of course I had to take another raven photo and another bird along the way. 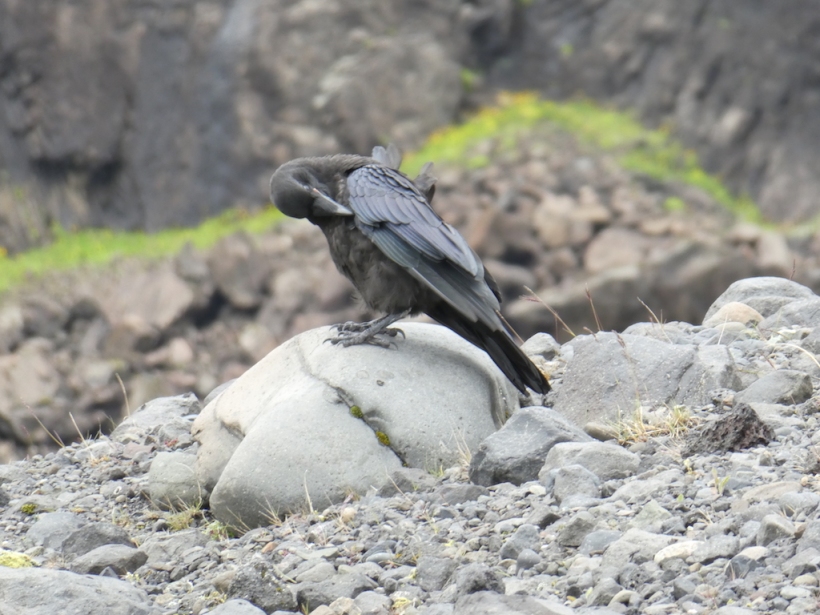 It would have been nice to take several more hikes in this area.  We were struck again at how much more time Iceland deserves.

There were many more spectacular rock formations along the way.  These photos just cannot capture the beauty of the landscape.

I think the above photo may be of Mt. Lómagnúpur.  There is a legend connected to it.

The giant then kept silent for a while. He then called out the names of 5 of Flosi’s men, which were the sons of Sigfús. He then called out another 5 names, Lambi, Móðólfur and Glúmur. And he called the names of another 3 men. Last of the names were Gunnar Lambason and Kolur Þorsteinsson. The giant then walked towards Flosi and Flosi asked him what was new and what was his name. The giant told Flosi that  his name were Járngrímur. Flosi analysed the dream and believed that all these men, whose names were called out by the giant, were going to be killed.

I may have the wrong photo, but I like learning about the  legends. 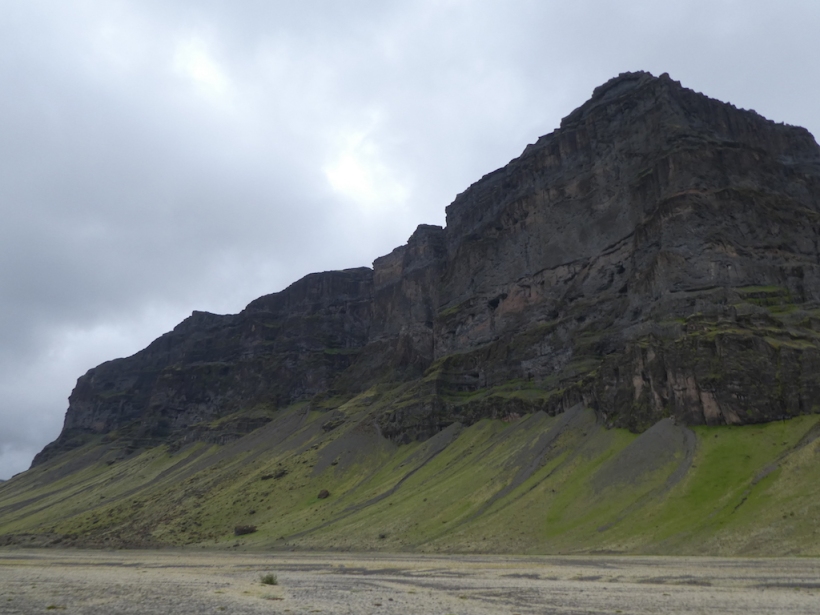 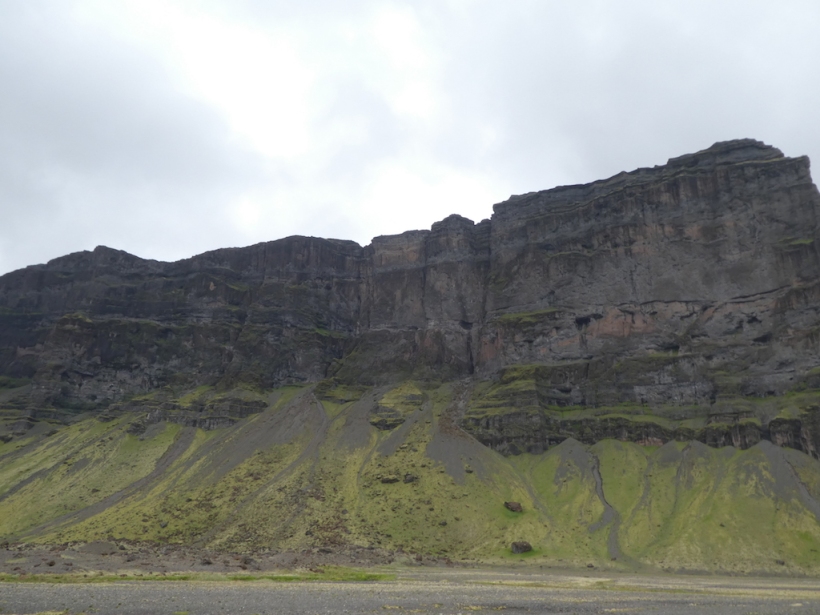 I was looking at the farm-house in the photo below and was wondering who possibly could have lived on such a beautiful property and so isolated. 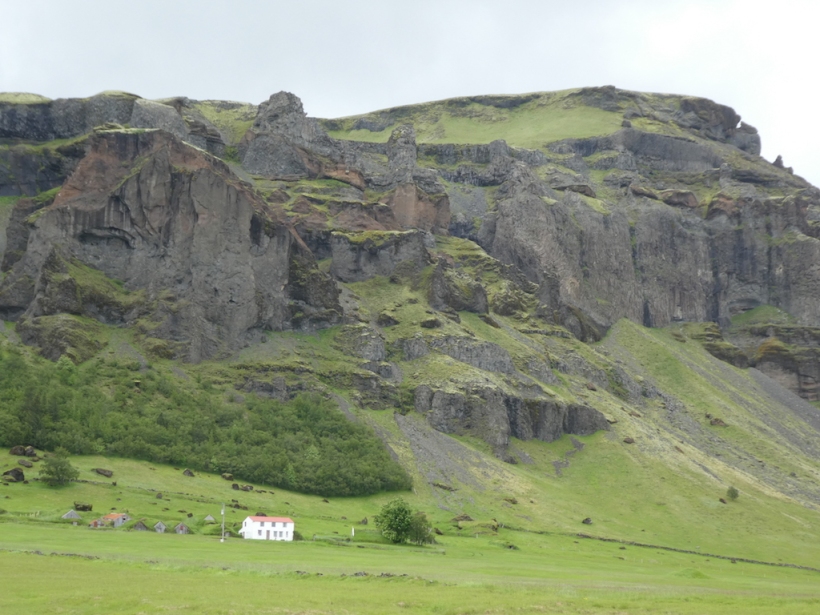 It is hard to see in the above photo, but I noticed that there were turf houses on the farm.  Elaine stopped the camper on a spot on the side the road where another car was parked.  The sign said that the place was private, but we saw two other people walking beyond the fence on the road up to the farm.  So we started up the hill, crossed the cattle crossing.

…and entered the farm.

What an utterly amazing place!!!

The land is in front of an amazing rock and several waterfalls on the property. 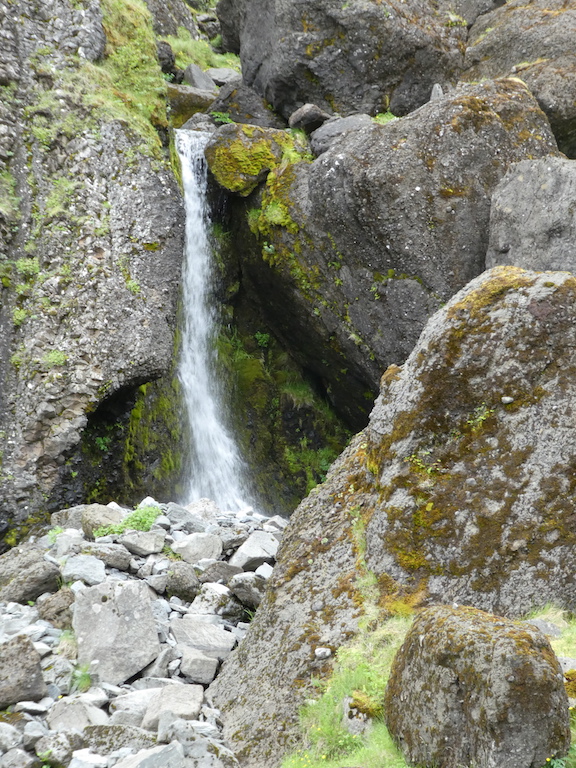 This is a photo of the main house.  The waterfalls are in the cliffs behind the house.

There was a paper tacked on the side of the house that said the last farmer on this property had died. 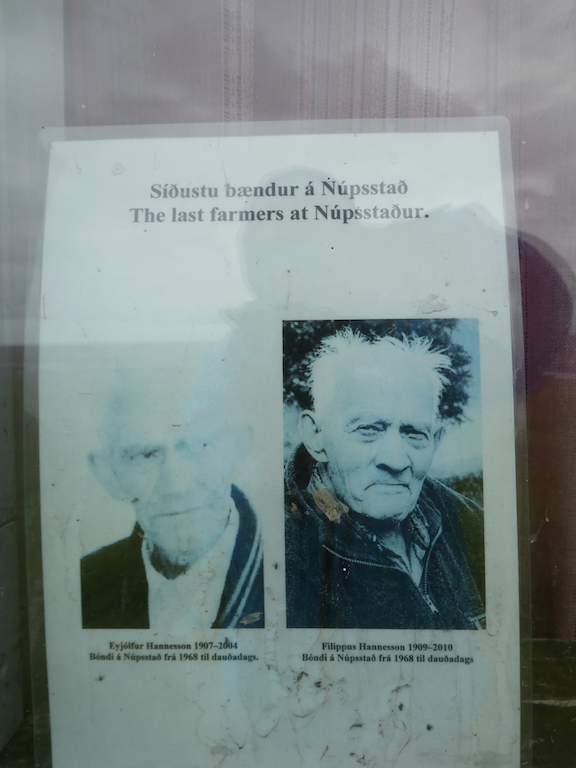 We spent a long time walking around the property and exploring every single building, shed and tool we would find. I was overwhelmed with what a wonderful find this was. 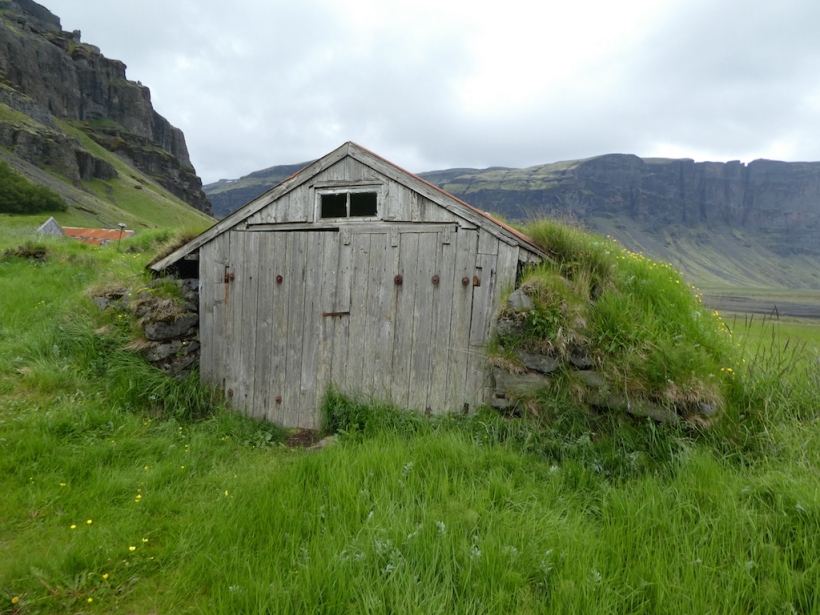 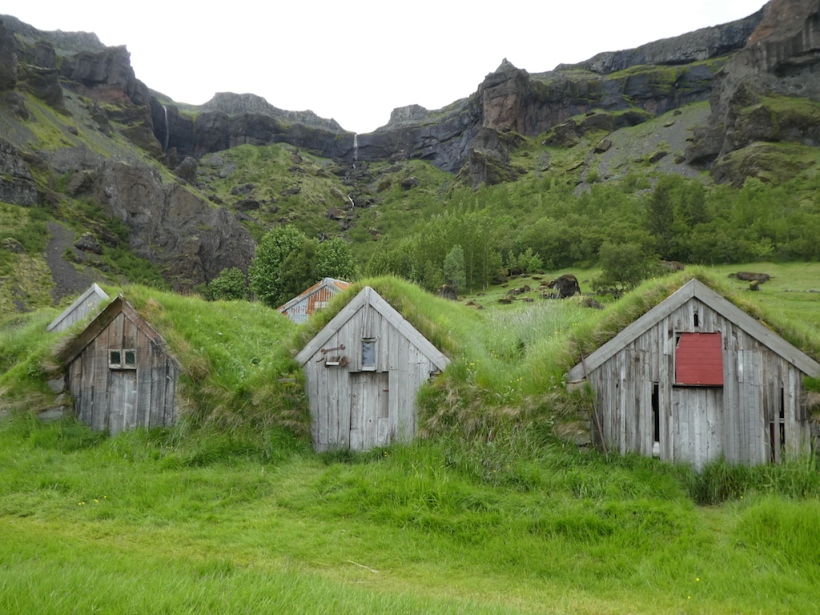 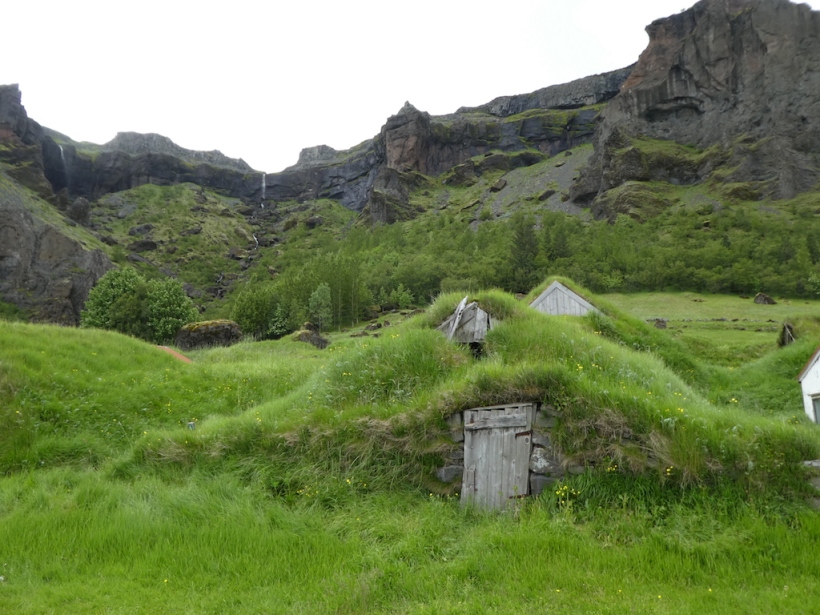 We were so amazed to find this small chapel. 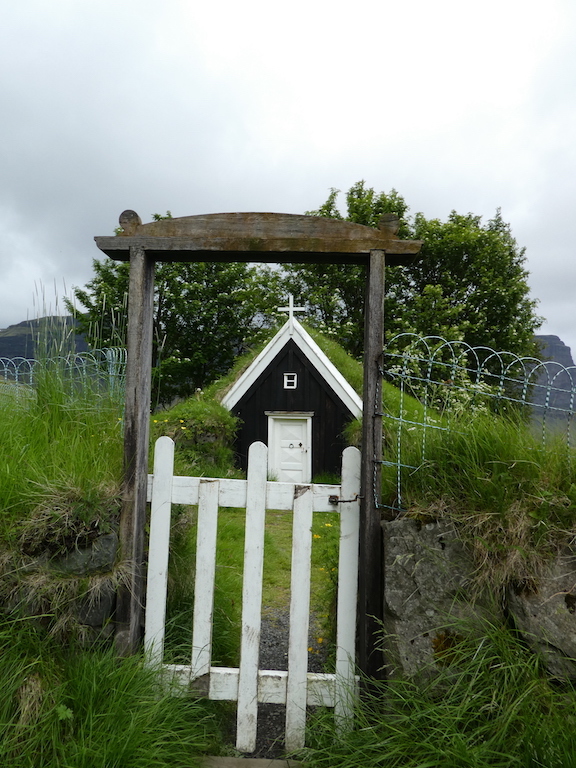 There was a key in the door that turned to let us into the chapel. 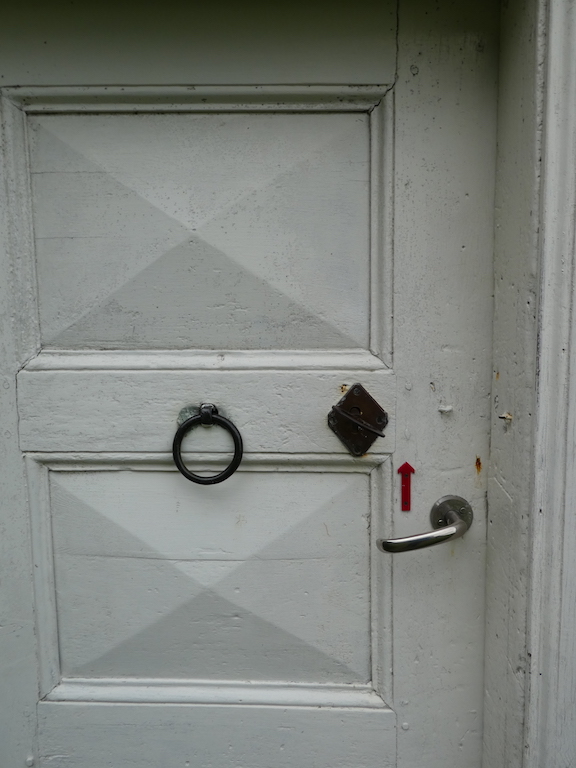 The cabinet at the back had a date on it.

There was a small attic and we reached up and found this bell.

There were several papers hanging on the wall written in Icelandic.

This photo of me in the doorway shows how small the chapel was.

We looked into this shed.

Elaine and I were totally overwhelmed when we looked into the shed and found these 3 sheep (one with a black face that hid behind the others) huddled in the back of the shed.  I am sure we were frightening them.

There was a small grave site. 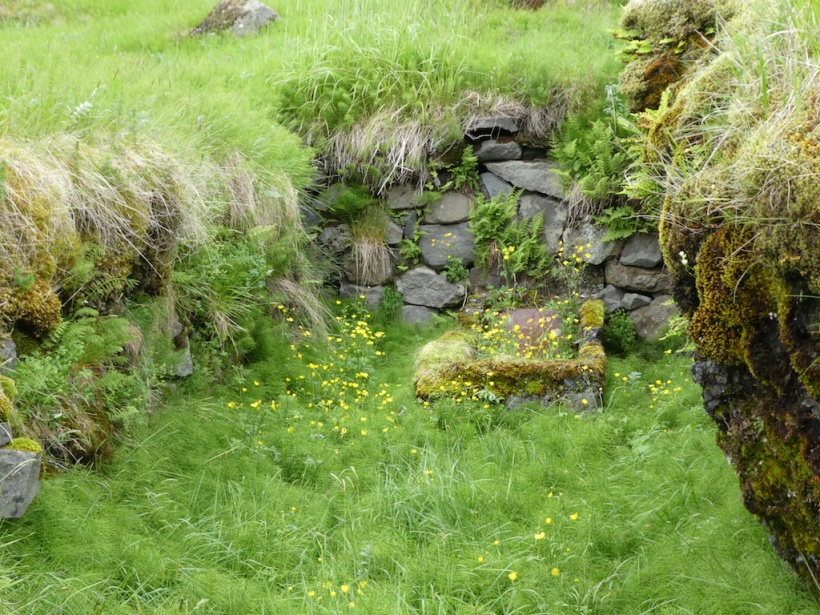 There was a small grove a trees. 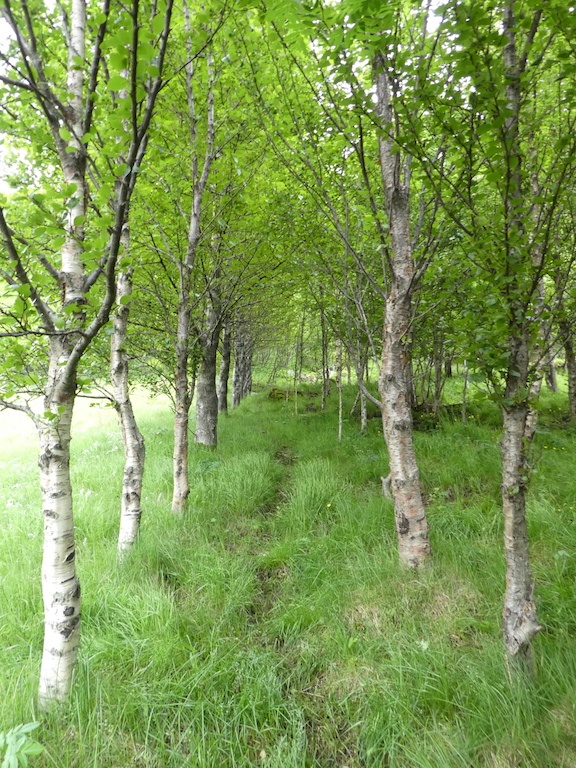 Near the grove of trees was a plaque with a genealogy chart that dates back to 1720.

Just a few more photos from the farm.

The words on this post say, lokað tímabundið – Closed Temporarily” 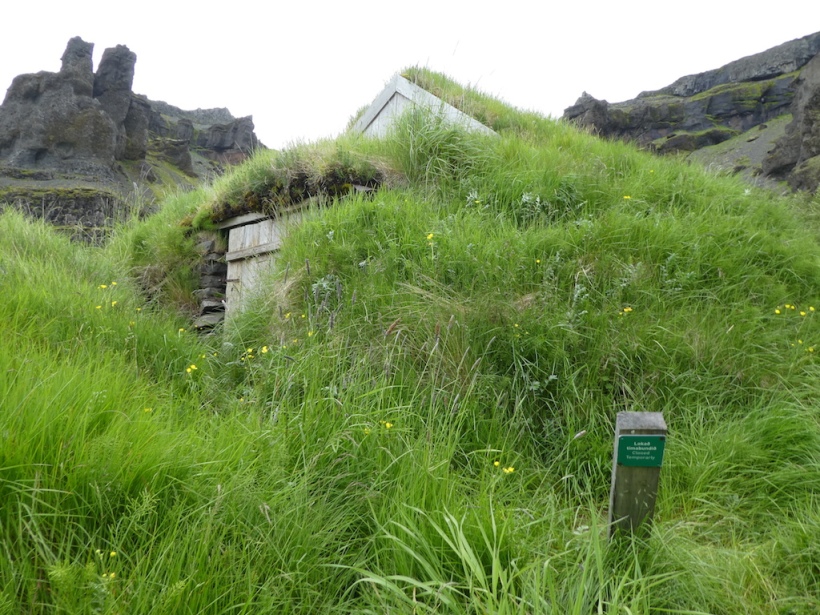 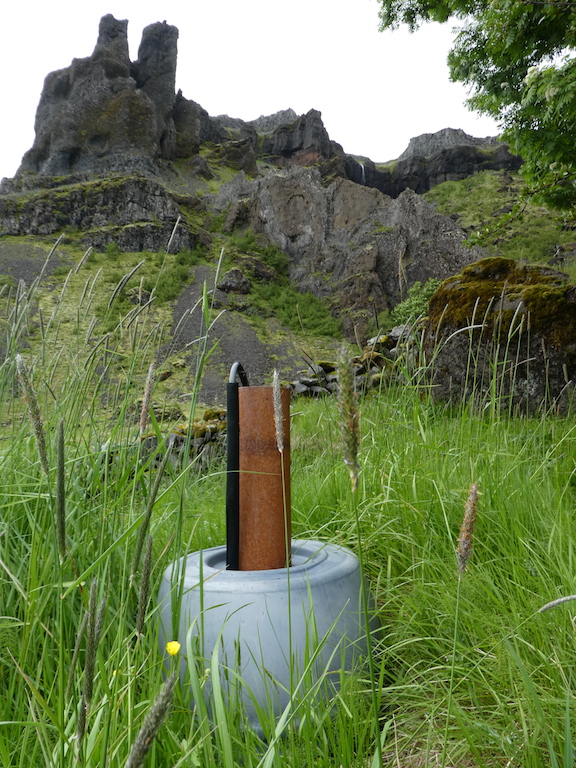 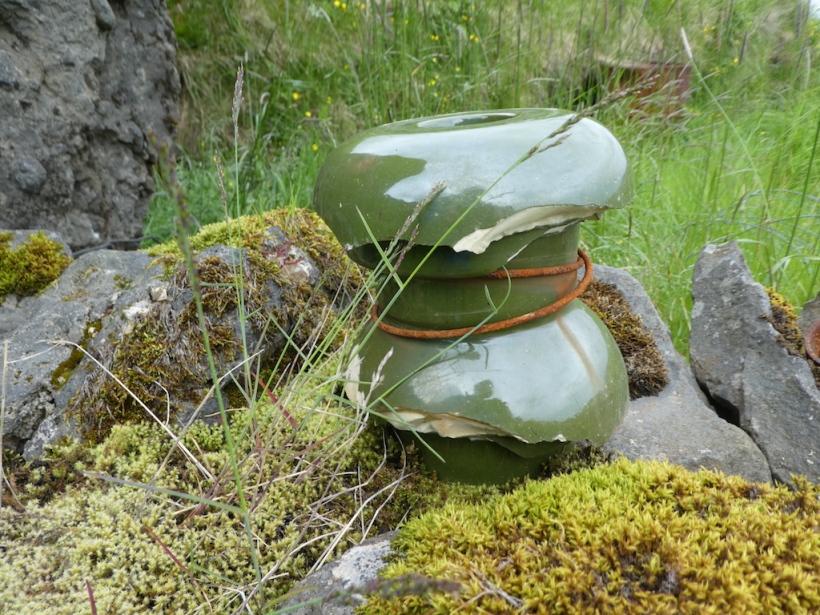 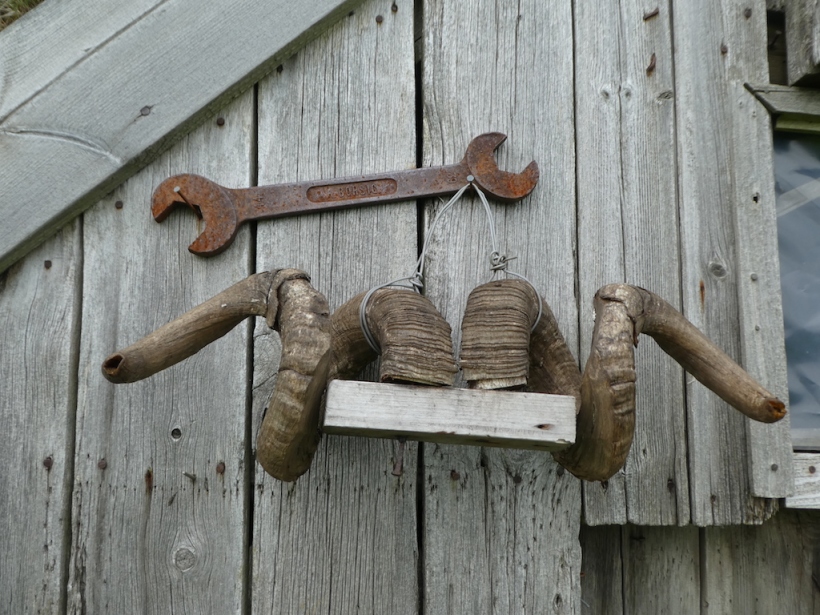 As I am writing this post, I am still astounded at how lucky we were to stumble onto such a fabulous experience.

We passed one more amazing farm property on our way to find a place to sleep.

It is hard to see the bottom of the waterfall that comes almost down to one of the buildings on the farm.  The farms in Iceland are truly amazing.

We passed a place to stay and decided to spend one more night in a room.  Little did we know that it was going to start raining.   I can’t remember the name of it, but it is in Kirkjubæjarklaustur.

I was still so excited about the farm with turf houses, that searched the web for information.  This is what I found.

Old turf roofed farm at Núpsstaður. The farm buildings date back to the early 19th century. The chapel is one of the last turf churches in Iceland.

Núpsstaðakirkja, the chapel, was deconsecrated in 1765 by a letter from the King and was most likely used as a farm church or an oratory after that time. For a while it was used as a storehouse. It wasn’t until 200 years later, or in 1961, that it was re-consecrated after having been repaired in 1958-1960.

It is believed that the chapel is mostly from a church that was built around 1650, but a church was abandoned there in 1765. In 1930 the chapel was the first house in the country to be proclaimed inviolate, and in 1961 it was re-consecrated.

The first church at Núpsstaðir is thought to have been built before the Reformation in Iceland, before 1200. The church was dedicated to Saint Nicholas, but very few people were part of the congregation at this time. In 1765 it stopped being used for the congregation and became a private chapel. After 1783 is was used as an outhouse. In 1930, the national museum of Iceland, Þjóðminjasafnið, took over its control and in the years 1958-1960 it was repaired and restored.

The farm has belonged to the same family ever since 1730. The farm mound is an extremely well-preserved source on how farming was, and how the area was used in the past.

We are two lucky travelers.

The chapel is most likely from a church built in 1650. However church has not been at Nupsstadur since 1765.

The chapel was proclaimed inviolate in 1930 and was the first house in Iceland to receive that and was then reconsecrated in 1961.