This morning we drove up to Laugarfell.  Most of the road was gravel and wound up many switchbacks.  There were beautiful from the road, but it was very rainy.

At Laugarfell there are two natural hot springs which give the place its name. The view from the pools is beautiful and in the distance we should have been able to see Mount Snæfell but the mountain was socked in the clouds. Old sayings claim the water in the springs have healing powers.

The first pool is larger and just under 100 degrees. 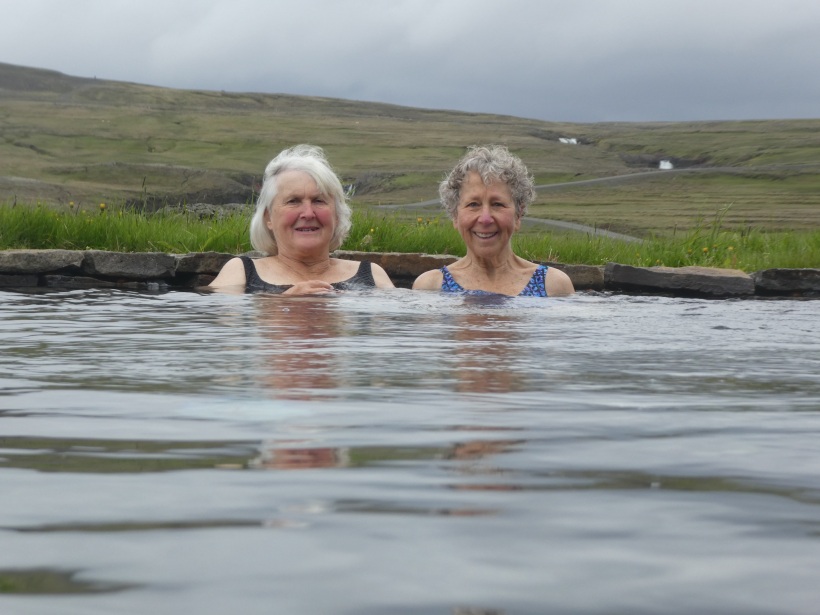 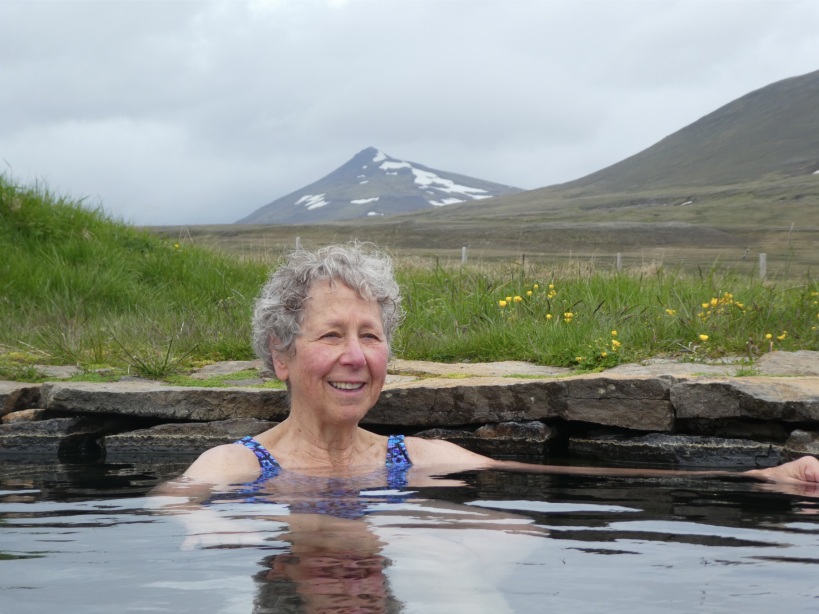 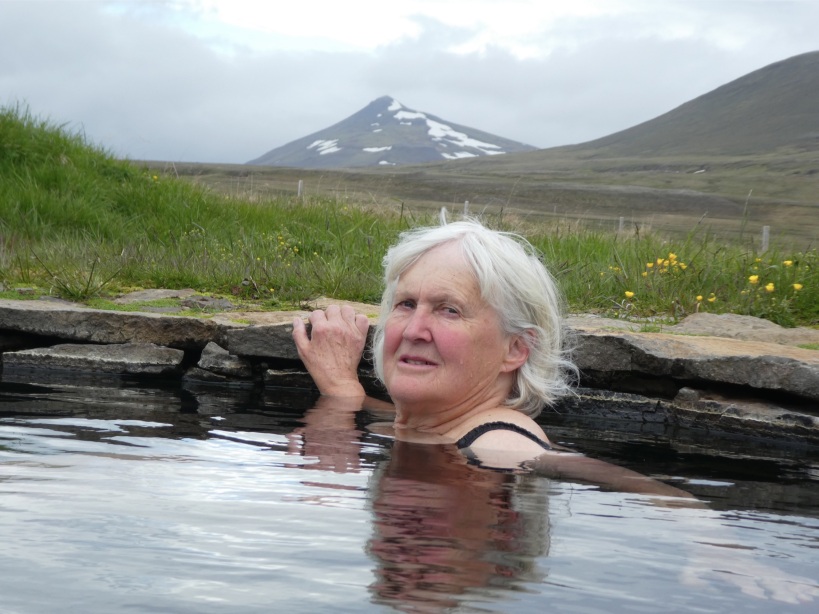 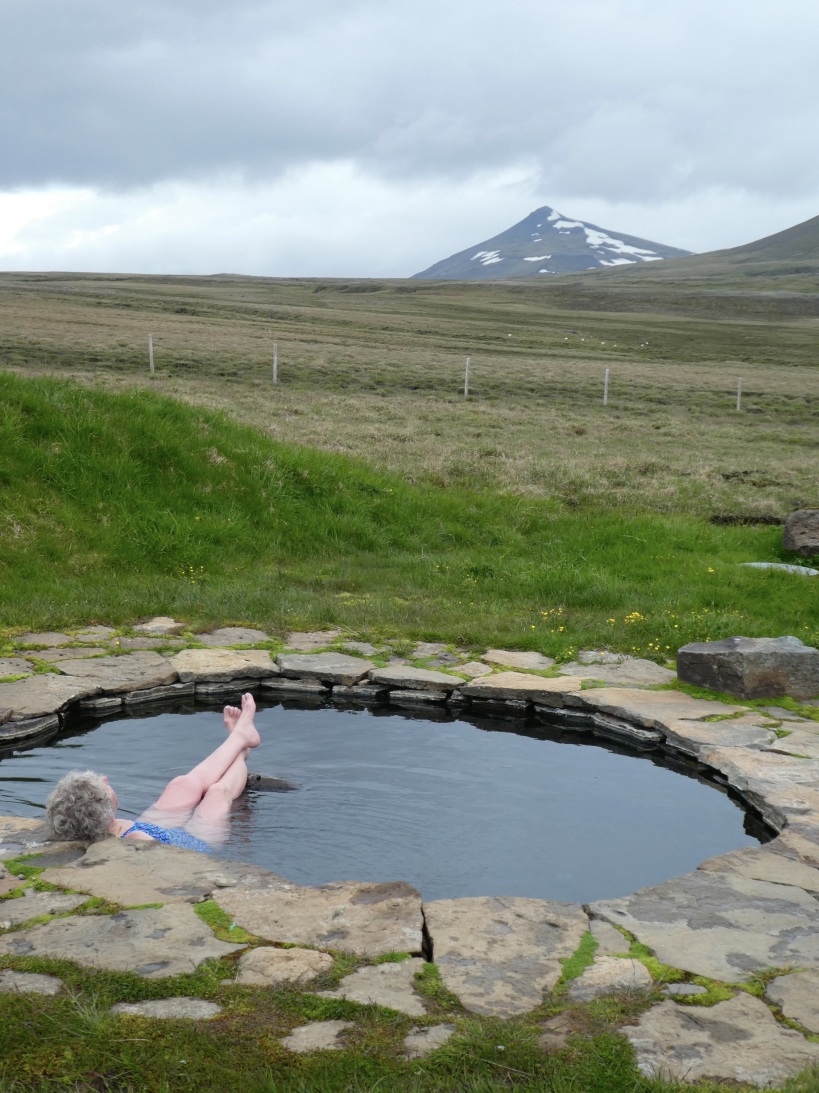 It felt like I could just relax there for hours.  But even with the short time I was there, I had raised my body temperature to the point of being a little dizzy.  In hind-site it would have been great to stay in the lodge there.  That way we could have used the hot pots many times and perhaps the weather would have cleared a bit in the night.

When we were leaving they were cleaning the hot-pots which was going to take 2 hours.  Just another example of how lucky Elaine and I are with are timing (not because of good planning just pure luck).  Icelanders do not plan ahead very much.  They just  look at the weather.  We can’t control the weather because of our time limits, but we are behaving like Icelanders and just going with the flow.

On the way back to town to stock up on food supplies (although we actually eat surprisingly little) we stopped to do a hike up to a waterfall.  It was a longer hike than we expected but the rewards were outstanding.

Hengilfoss is one of the highest waterfalls in Iceland 450 meters above sea level and drops into a beautiful gorge.  Hengifossárgljüfur.   A special feature of the rock layers in the gorge surrounding the waterfall is the layers of red clay sandwiched between layers of basalt.  Lower in the gorge beneath the waterfall there are interesting sedimentary rocks about 100 m thick.  The upper layers of tree trunks and branches and other traces of plants occur.

The gorge becomes narrow and shallow below Sellækir, deepening again at Lilanes and broadening into an amphitheater of basalt columns (stðlaberg) that frames the 30 meter high waterfall known as Litlanesfoss or Stuónarhraun (viewing rock” consisting of mainly basalt columns.

The entire canyon was spectacular.  On the way up the path I noticed some sheep hanging out by a small waterfall. 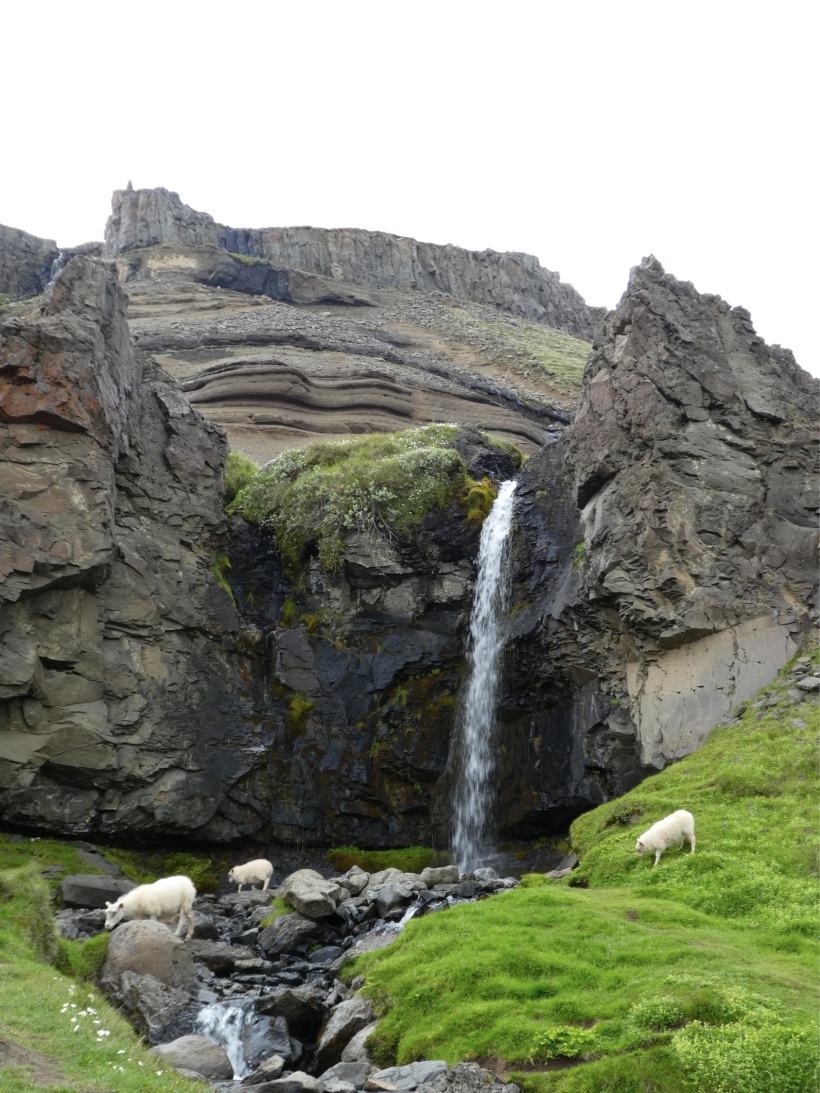 There was one just balancing as it crossed the rock. 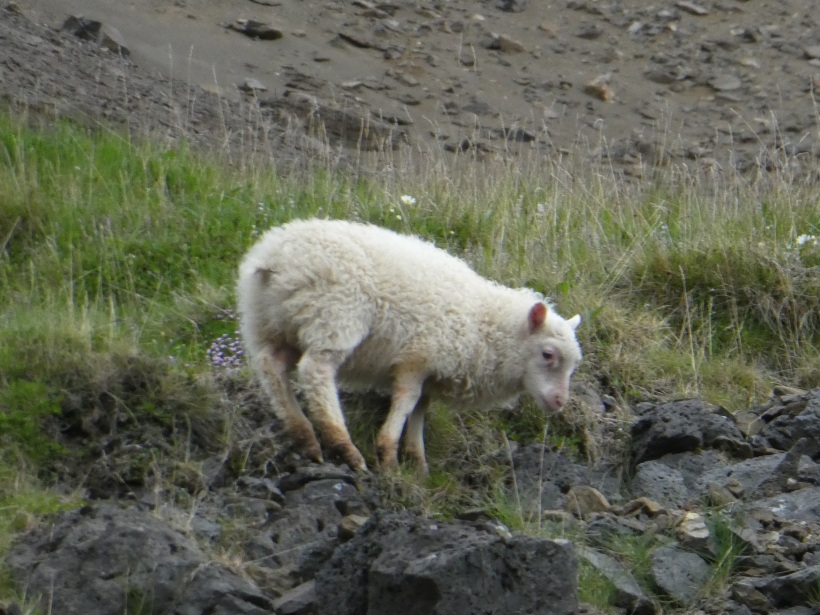 We came to the basalt columns first and Litlanesfoss first. 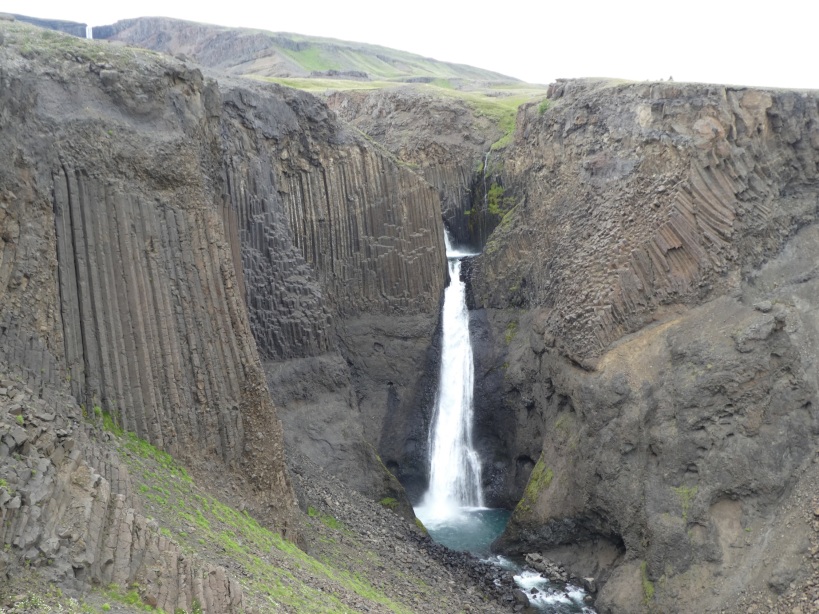 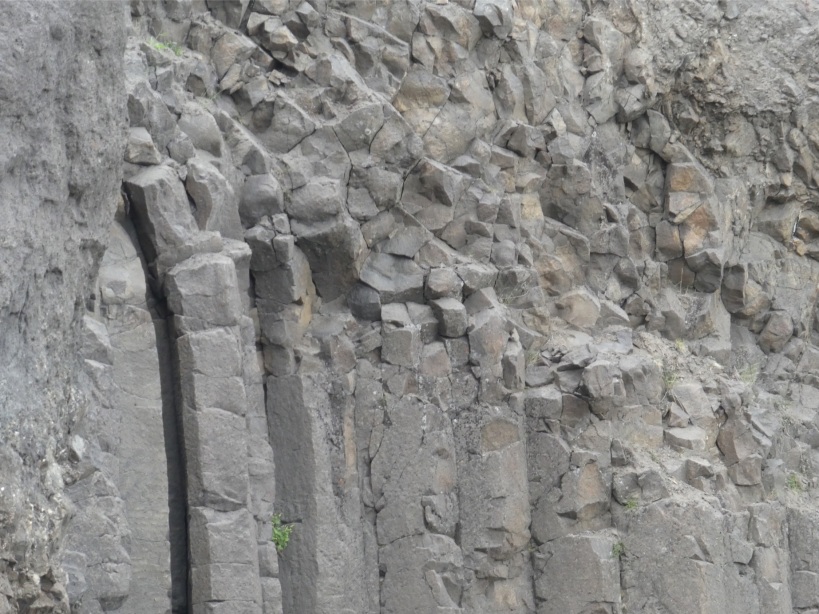 I think I read that the curve in the top of the basalt pillars was caused by the lava becoming cooler.

Walking back into the canyon up to Hengilfoss was so spectacular.  As I walked closer to the falls the rocks were pretty slippery. 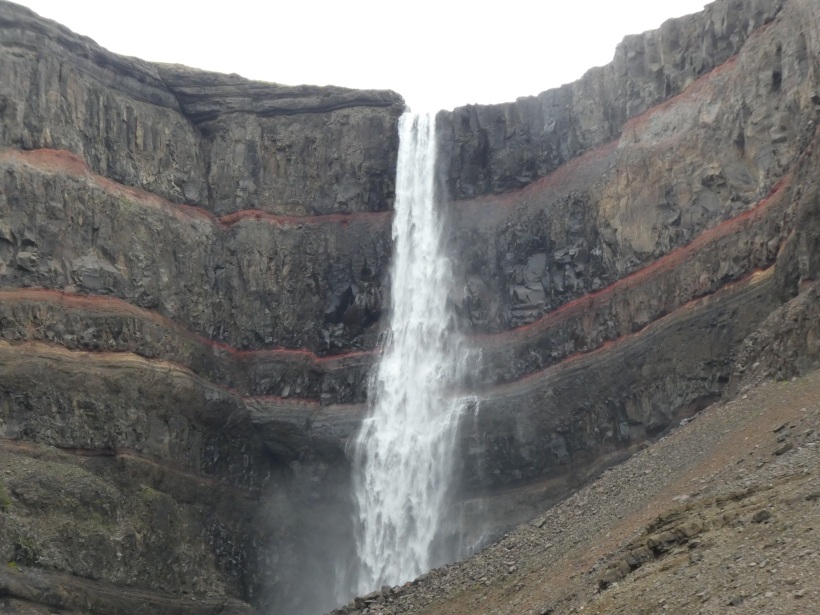 Two girls took my photo after I took theirs. 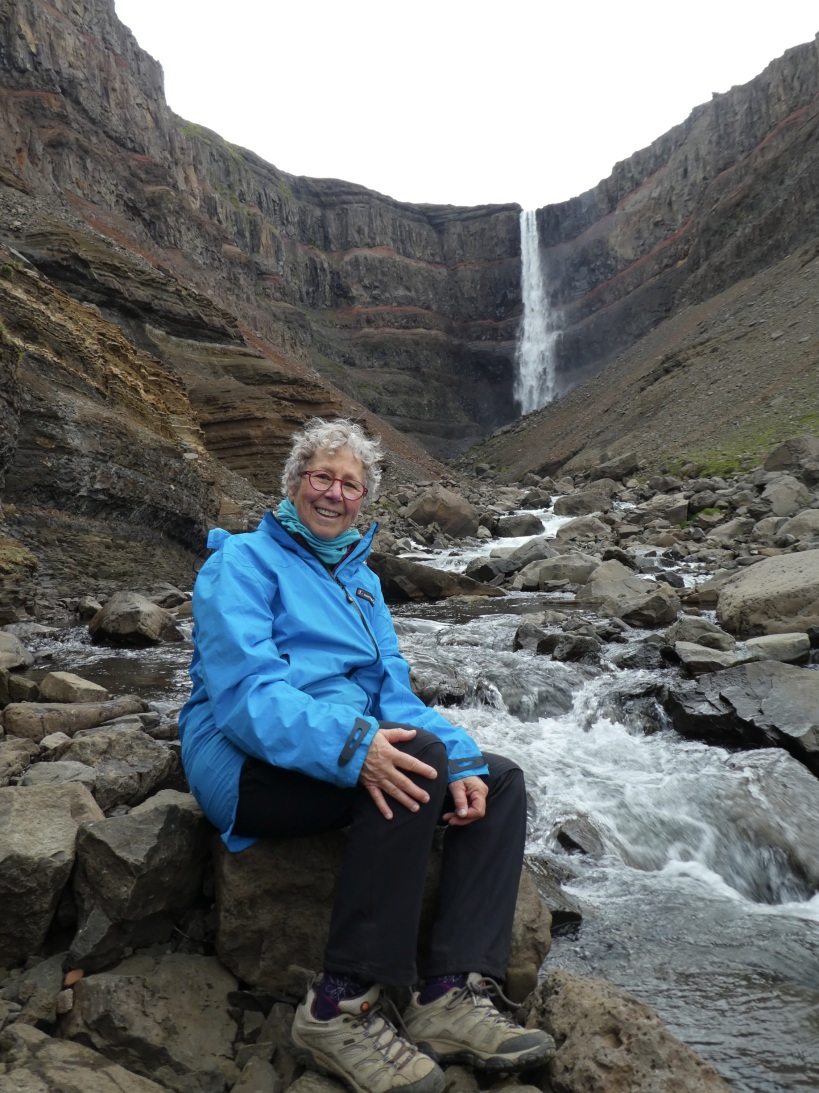 I had walked as far as I could safely.

I loved these sheep that were standing and watching the road but they couldn’t cross the grating. 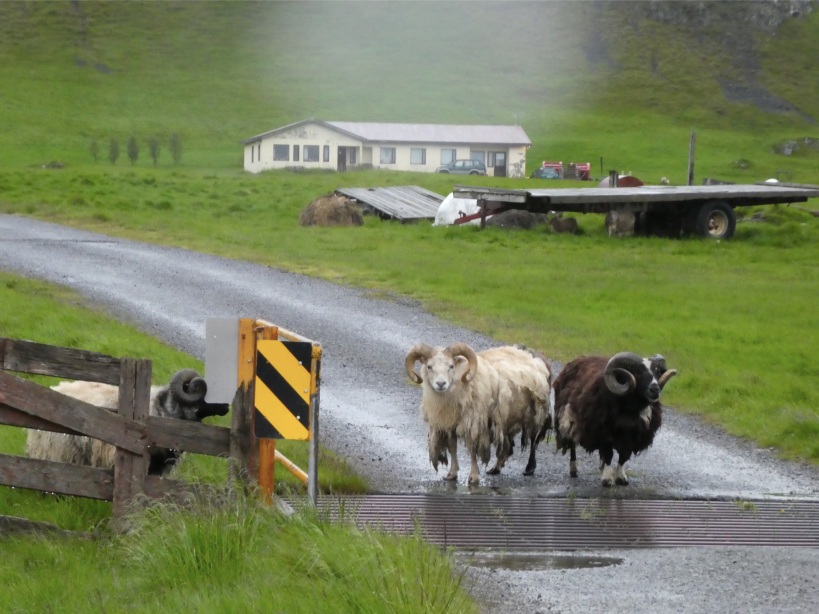 Their wool was sopping wet. 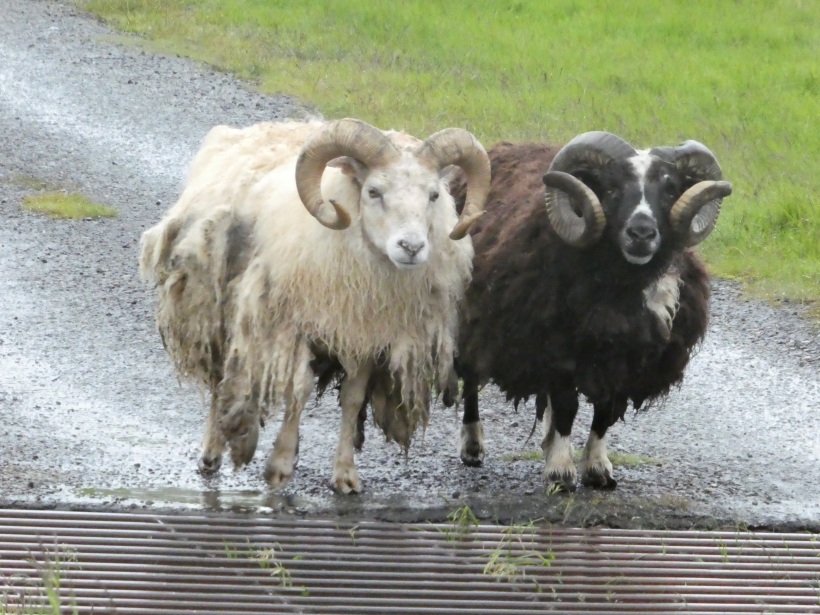 After our shopping at Bonus we started on our way again.   We had been advised to get off of Highway 1 and took the fjord roads.  It was beautiful in the rain but not too conducive for photography.  Elaine did a fabulous job driving around each fjord as I did the navigating.

We decided to stop in Höfn (pronounced Hop – like you are having a quick hick-up) for the night. Höfn is an Icelandic fishing town in the southeastern part of the country. It lies near Hornafjörður fjord. The town, the second largest in the southeastern part of Iceland, would have offered  scenic views of Vatnajökull if it had not been raining.   We decided to go out for dinner and that was a wonderful choice.  The lobster salad with garlic dressing at Z Bistro was absolutely delicious.  Peppers and tomatoes have been our salad fixings, so a real salad was a treat – aside from loving lobster.

Time for bead at about midnight without even posting on my blog.  I am now 2 more days behind.