Elaine and I went back out to Hafnarhólmi to see the Puffins again this morning.  I was surprised to see the Hurtigruten ship out in the Borgarfjörður.  It was the Spitsbergen.

All of the people on the ship were wearing red jackets.  Seeing the Hurtigruten through my memory back to being on the FRAM in Antarctica.By the time we got there many of the passengers went into town on a bus.  It was nice to have a couple of the expedition guides out there with us so we could ask them questions.

Of course, I took a few more photos of Puffins. 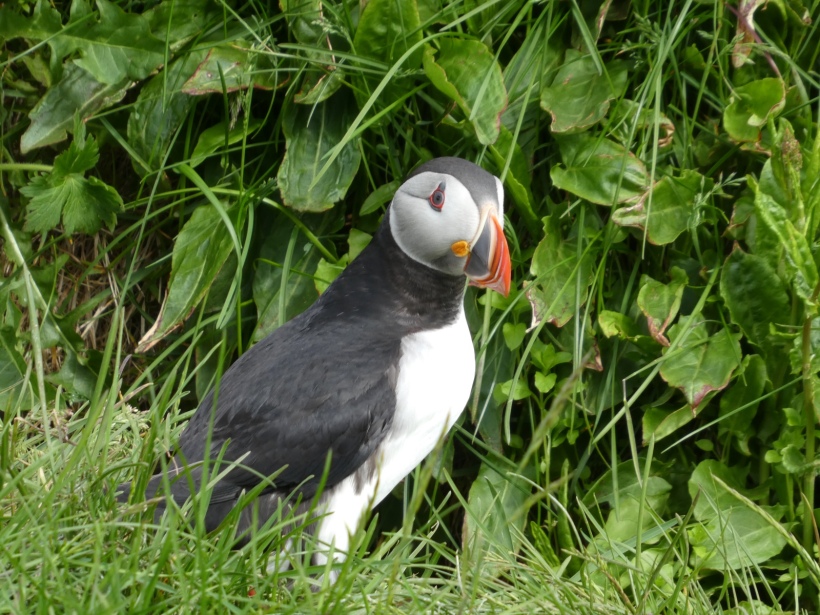 I love when they open their wings.

And I did one more video of a single Puffin turning his/her head back and forth.

We stayed out there for a long time. Elaine spent some time asking the Hurtigruten marine biologist questions about puffins.  I could watch Puffins for hours and hours.  It reminded me of how much I loved watching the penguins in Antarctica.

On our way back to town I asked a workman what they were building near the dock.  He said that it would be a 3 story building.  The bottom floor would be for the boat people; the second floor for the tourists; and the 3rd floor for a restaurant.  Horrible.  We have heard that Iceland is expecting 3 million visitors this year.  Yikes!  One of the things that Elaine and I are so enjoying is the lack of people on the roads.  Aside from our own pleasure, there are several other reasons that this is a problem.

After we dragged ourselves away from the puffins, we took a walk through town to see the sights and take photos. 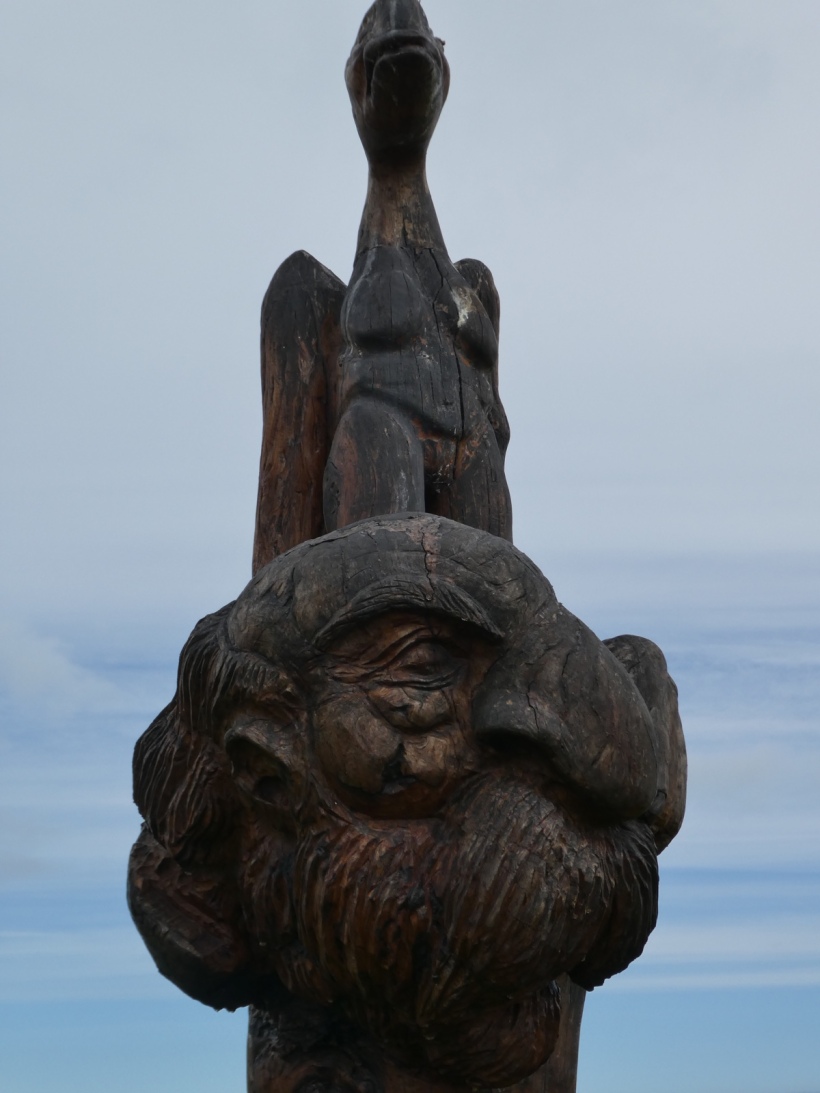 Naddi, a monster who lived in Njarðvik Screes, is an animal below the waist and human above, His home was in a cave and from there he came to kill travellers after dark. He was eventually cast into the ocean by a strong man in Borgarfjörður. The man erected a cross to “Get God’s protection,” This is a photo of the cross and the sign. The inscription is in Latin and reads, “Bow down and revere this effigy of Christ, who you pass by. Anno MCCVI (1306) 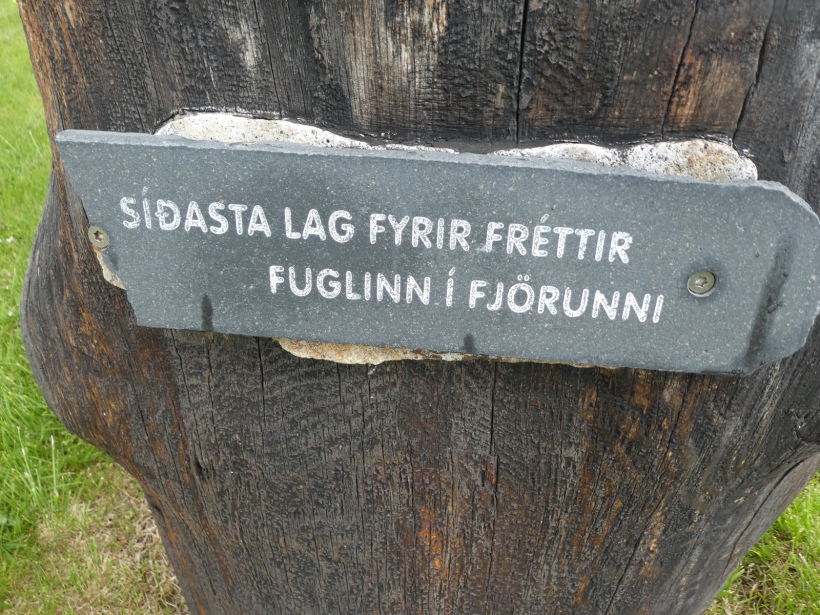 Elaine noticed that Stella was working on the outside of her turf house.  We went back over to say, “Hi” again.  I asked her about the cellar.  The young workman explained what I meant to her and she took us back into the house and opened the trap door to the cellar.

Stella tried to tell me (in Icelandic) where the light switch was.  So I got down on the floor to reach for it. 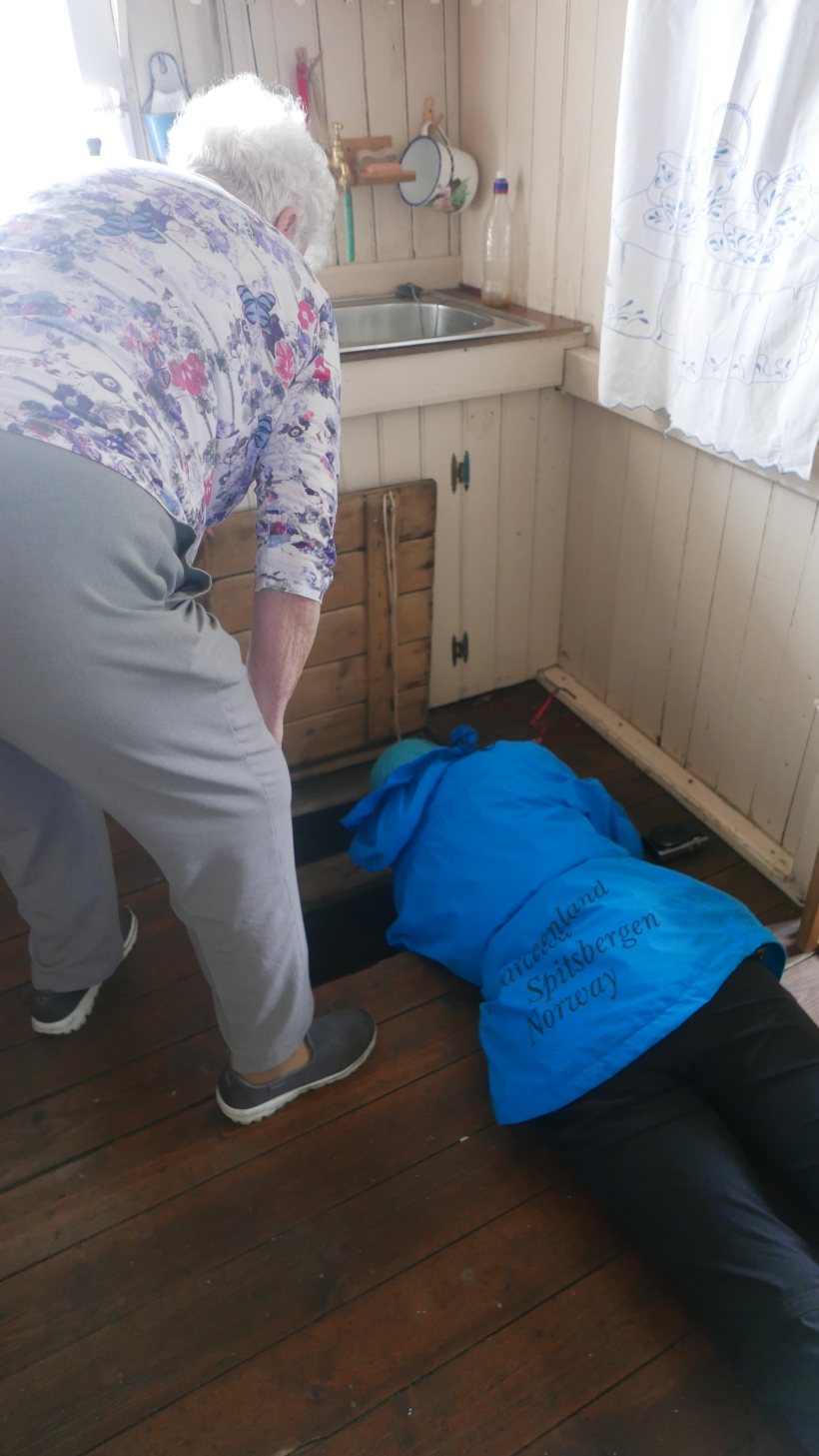 I had to use my phone to search for it. 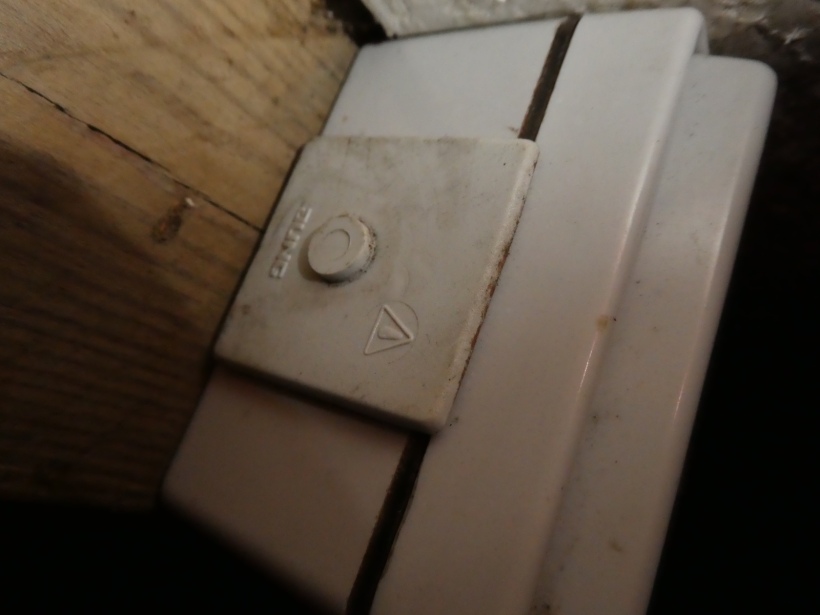 I was showing Stella how I was pushing the button to turn it on. 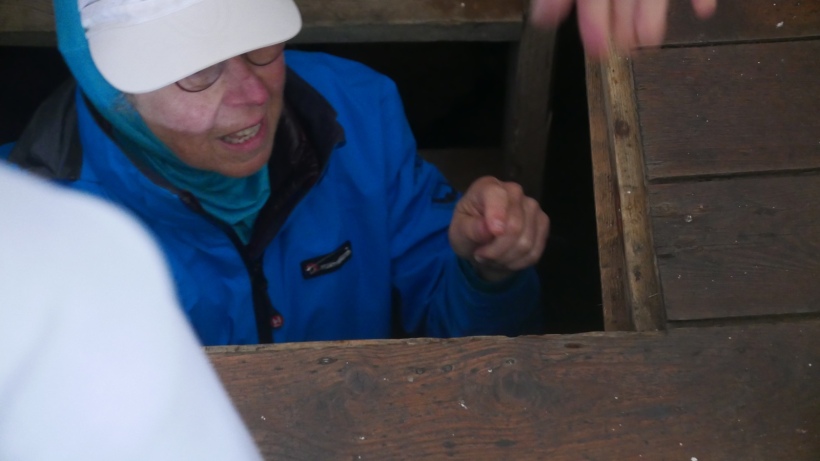 No matter how many times I pushed it, it wouldn’t turn on the light.  So I went down into the cellar in the dark.

Flash photography didn’t really work.  It was very small and dry.  So back up I came.  I think that Stella was telling us that they stored vegetables down there, but I am not sure.  So we just took another photo with Stella.

We walked by this sculpture.

Here is the story that goes with it.  Naddi, a monster who lived in Njarðvik Screes, is an animal below the waist and human above, His home was in a cave and from there he came to kill travellers after dark. He was eventually cast into the ocean by a strong man in Borgarfjörður. The man erected a cross in the screes to “Get God’s protection,” This is a photo of the cross and the sign. The inscription is in Latin and reads, “Bow down and revere this effigy of Christ, who you pass by. Anno MCCVI (1306).

We walked through the town and checked out the pub and some guest houses.  I really think this home is cute.

Then we checked out the fish factory.  The men were getting the lines ready with bait.

They were working very fast.

Borgarfjörður  is known for stories of elves and spirits. A large rock is situated near the village. It is called Álfaborg (Elf Rock) and the fjord derives its name from it. This is the residence of Borghildur, queen of the Icelandic elves. Many myths revolve around her, other inhabitants of the rock and their interactions with humans.

Both of us wanted to eat the fish soup (Fiskisúpa)again so we went back to Alfa Cafe and hung out for a while.  I love that fish soup and could eat it every day.  I bought some more banana bread with chocolate and we left Borgarfjörður and drove towards Seyðisfjörður.

First we went back to Egilsstaðir to fill up the gas tank.  It will be interesting to find out how much money the gasoline has cost on this trip.

Then we drove over Fjarðarheiði mountain pass 27 kilometres to Seyðisfjörður which is surrounded by mountains with the most prominent Mt. Bjólfur to the west (1085m) and Strandartindur (1010m) to the east. The fjord itself is accessible on each side from the town, by following the main road that leads through the town.

Here are the rest of the photos from today. 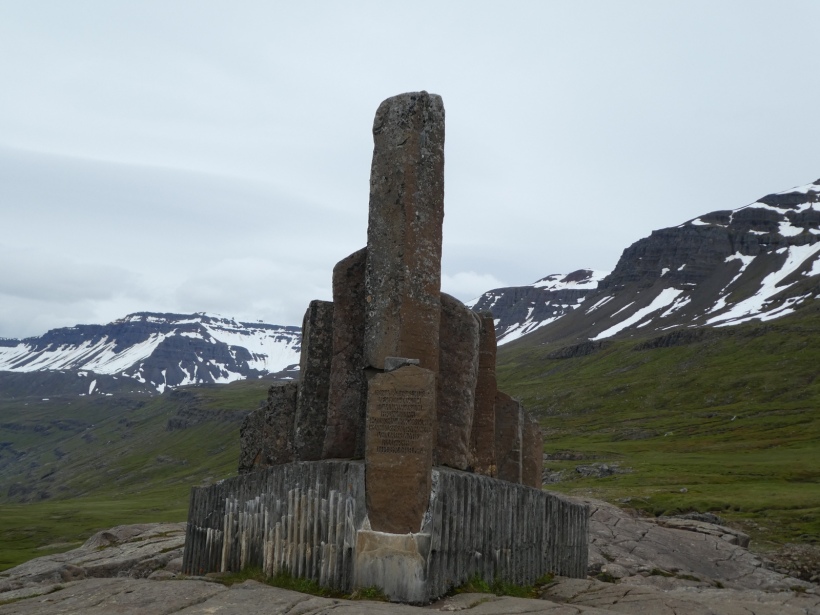 This rock is a stuðlaberg.  It has been moved to this spot and put into concrete.

Settlement in Seyðisfjörður traces back to the early period of settlement in Iceland. The first settler was Bjólfur, who occupied the entire fjord. The burned down ruin of a church at Þórunnarstaðir has been carbon-dated to the 10th century, with earlier graves exhumed dating back to the 8th century.

This sculpture of a phone booth was built to commemorate the first telegraph cable connecting Iceland to Europe.  It  made landfall in Seyðisfjörður in 1906, making it a hub for international telecommunications well past the middle of last century.

We drove to the end of the town (as far as the decent gravel road went) and back again.  I liked this boat. 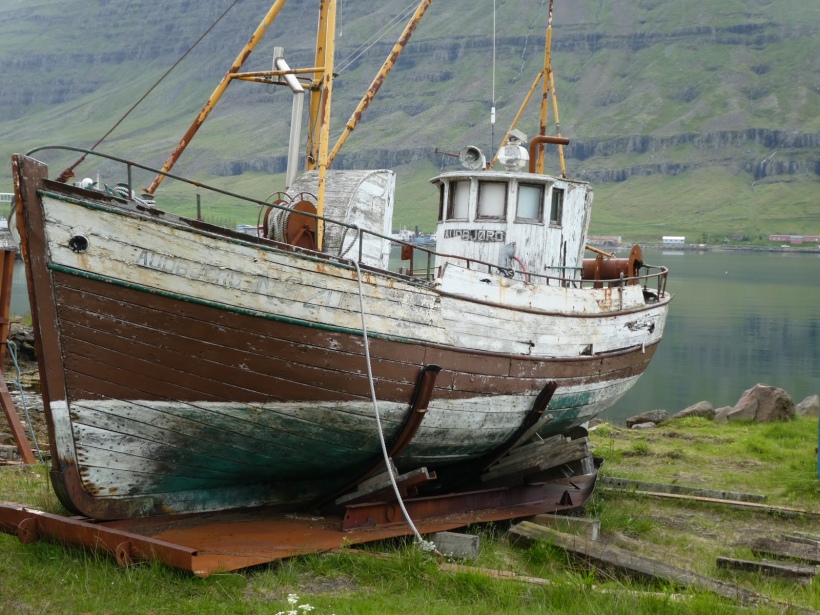 We drove up as high as we could over the town and took this photo looking back. 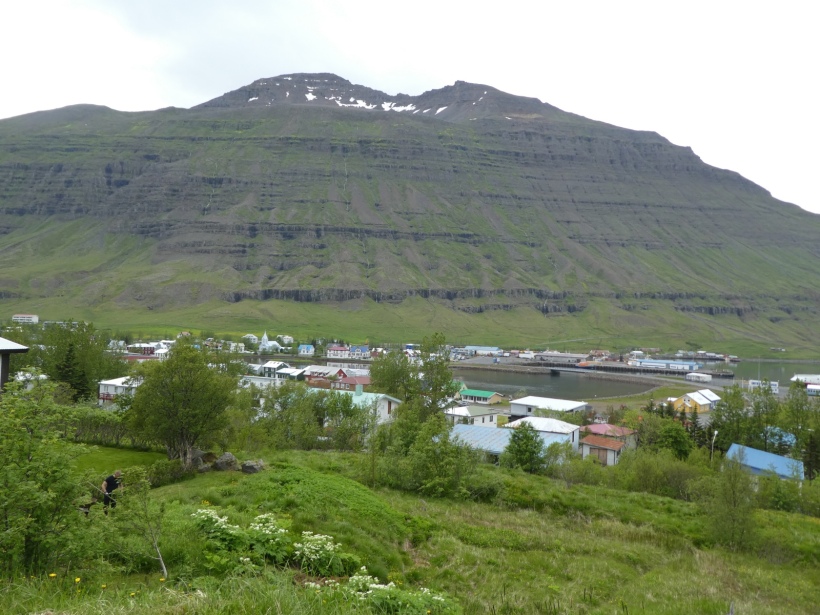 We went into the hostel just to see it.  It had a great kitchen.  Everybody takes off their shoes before they enter.

With the recent demise of the local fish-processing plant the village has shifted its economy to tourism. It still remains a significant fishing port on the east coast of Iceland, with harbours, ship construction facilities and a slip.

The church is often referred to as the Blue Church.

The Blue Church Summer Concert Series was founded in 1998 by Muff Worden, musician and Sigurður Jónsson engineer. The concerts are held in the church of Seyðisfjörður on Wednesday nights in July and early August. The aim is to offer a program consisting of different music styles, where classical music, jazz and blues, folk music and lighter music get to shine. The performers are usually highly qualified musicians.
The Seyðisfjörður church is a good concert house, praised by the performers. It houses a fairly new Steinway grand piano and a Frobenius organ with 14-15 stops. It has seats for 300 people. The concert guests are both locals and foreign travellers.  I wish we could be there to hear the concerts.

We decided to head back to Egilsstaðir to camp for the night.  That means I will get to shower and dress inside a warm building again tomorrow.

The rock walls all along the road are teaming with waterfalls that come streaming all the way from the top.  I lost count of how many there were.  It seems like they were every few meters on both sides of the road.  What a beautiful drive.