Waking up this morning was much easier than I thought.  What a delight to go to a regular breakfast in the hotel.  I sure ate a lot.  Then we went to pack up our stuff.  I decided that since we didn’t have to check-out until noon, I would spend 20 minutes in the infra-red sauna.  It was so delightfully relaxing.

Before leaving the hotel, we stopped and talked with the young man, Garðar, on our way out.  We had a lot of questions to ask about our plans, roads, midges, etc.

Here that we learned about those annoying little critters.

Elaine had been talking with Garðar when I was in the shower and she learned more about the sheep and horses.

Before we took off for our day we went back to the nature baths to take a couple of photos. 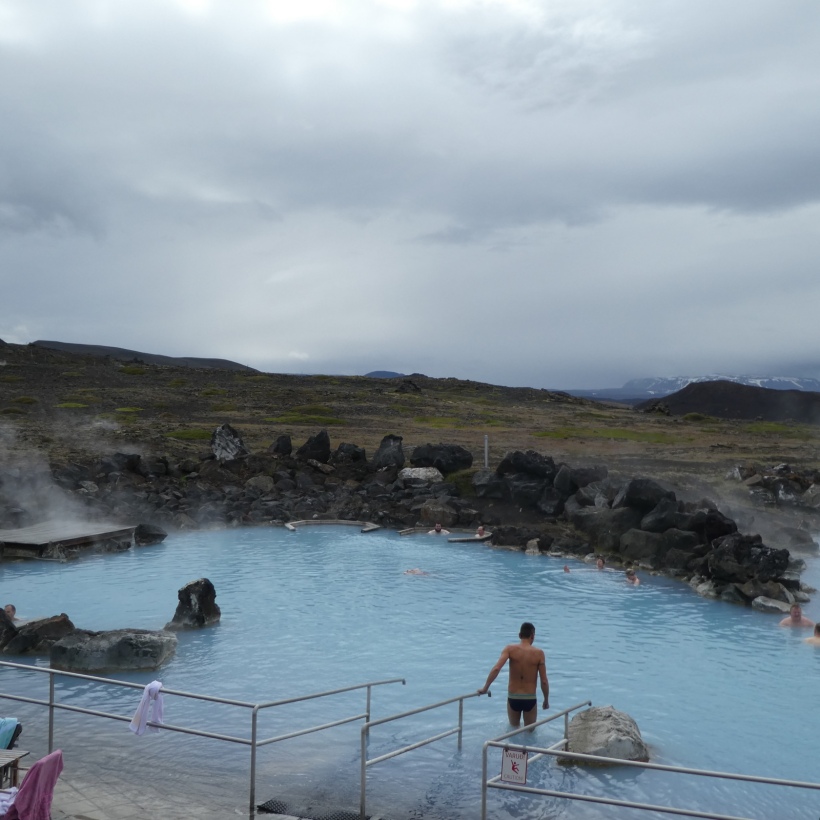 Notice the two shower-like jets.  I tried them last night and you get a warm water massage when you stand under them. 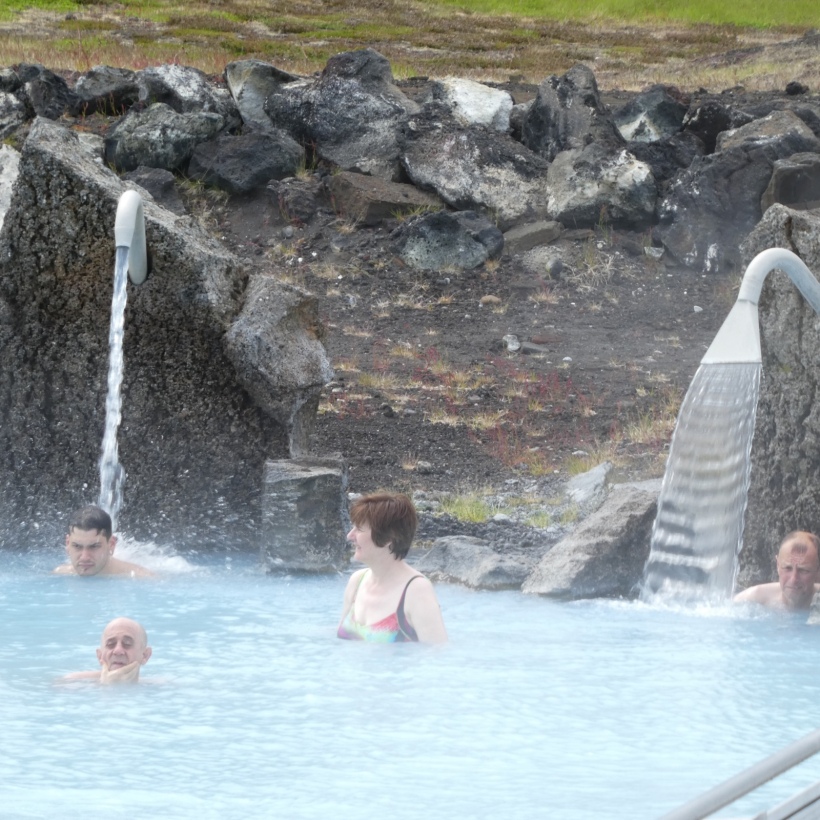 The steam coming up through the vents all around the place is amazing.

It was a short distance to Dimmuborgir; pronounced is a large area of unusually shaped lava fields east of Mývatn in Iceland.  The Dimmuborgir area is composed of various volcanic caves and rock formations, reminiscent of an ancient collapsed citadel.

The Dimmuborgir area consist of a massive, collapsed lava tube l formed by a lava lake flowing in from a large eruption  in the Þrengslaborgir and Lúdentsborgir crater row to the East, about 2300 years ago. At Dimmuborgir, the lava pooled over a small lake. As the lava flowed across the wet sod, the water of the marsh started to boil, the vapour rising through the lava forming lava pillars from drain-pipe size up to several meters in diameter. As the lava continued flowing towards lower ground in the Mývatn area, the top crust collapsed, but the hollow pillars of solidified lava remained. The lava lake must have been at least 10 meters deep, as estimated by the tallest structures still standing.

The lava flow surface remains partly intact around the Dimmuborgir area, so that the Dimmuborgir itself sits below the surrounding surface area. The area is characterised by large hollow cell- or chamber-like structures formed around bubbles of vapour, and some dramatically standing lava pillars. Several of the chambers and pillar bases are large enough to house humans, giving rise to the term “castles” (borgir).

We took a wonderful walk around the area. 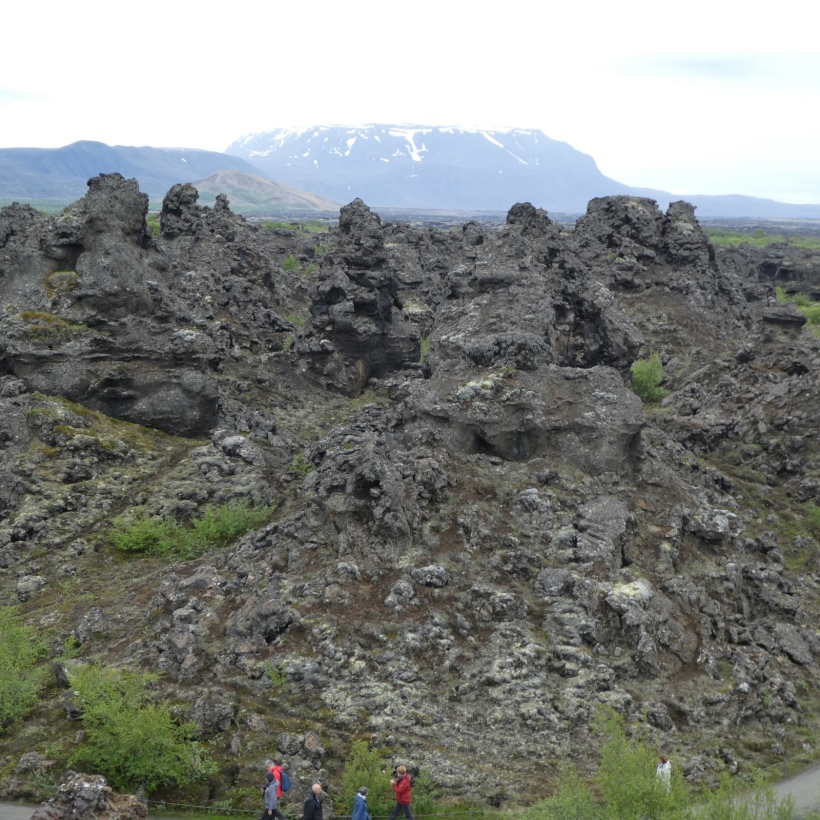 Of course, I was wearing the net that protects me from the midges.  They freak me out when they get in my ears, eyes, or nose. 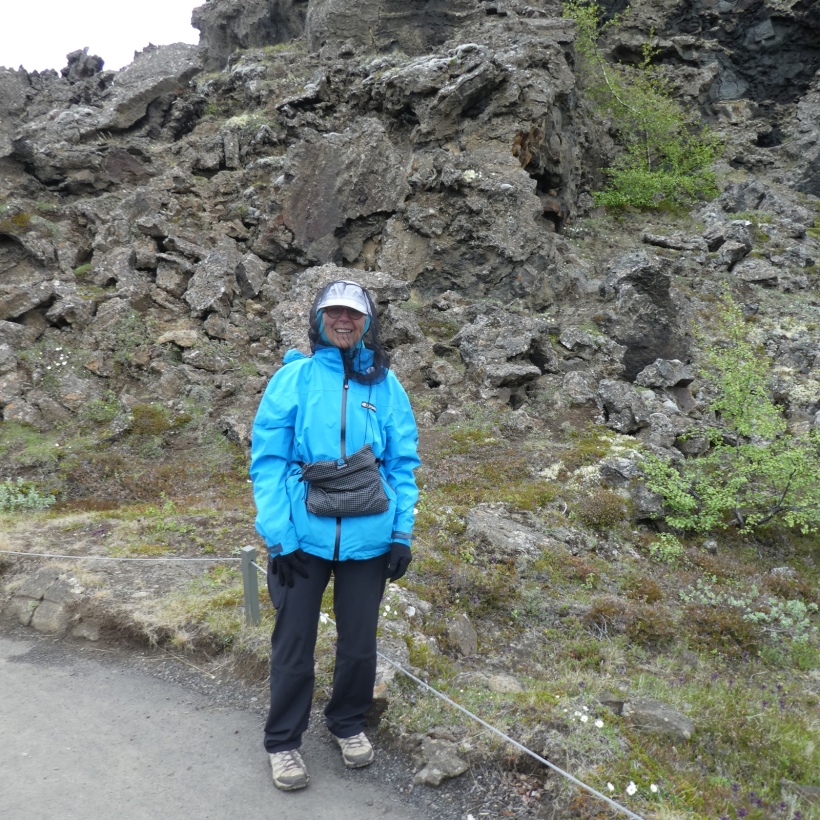 This cave is set up to look like it belongs to the Icelandic Yule Lads.

Folk lore has it that here in Dimmuborgir is where the Icelandic Yule live.  They are the 13 sons of Gryla dn Leppaludi, vicious trolls that live in a big cave in Ludentarborgir.  The brothers all have funny names that often refer to their preferences for food or interest. To name a few there is Spoon Licker Sausage Swiper, Skyr Gobbler, and the noisy fellow Door Slammer who loves to wake up people by slamming the doors very loudly.

Here is a photo of a depiction of them from the web.

In the summer the Yule Lads can rarely be seen because they use this season to rest and are sleeping in their caves.  But as winter comes, they wake up and start preparing for Christmas.  The best time to meet them here in Dimmuborgir is during the month of December when they are busy preparing for Christmas.  The best way to find them is to walk the path to Hallarfiot and shout loudly, “Jolasverinn” – loud enough to be heard by all. 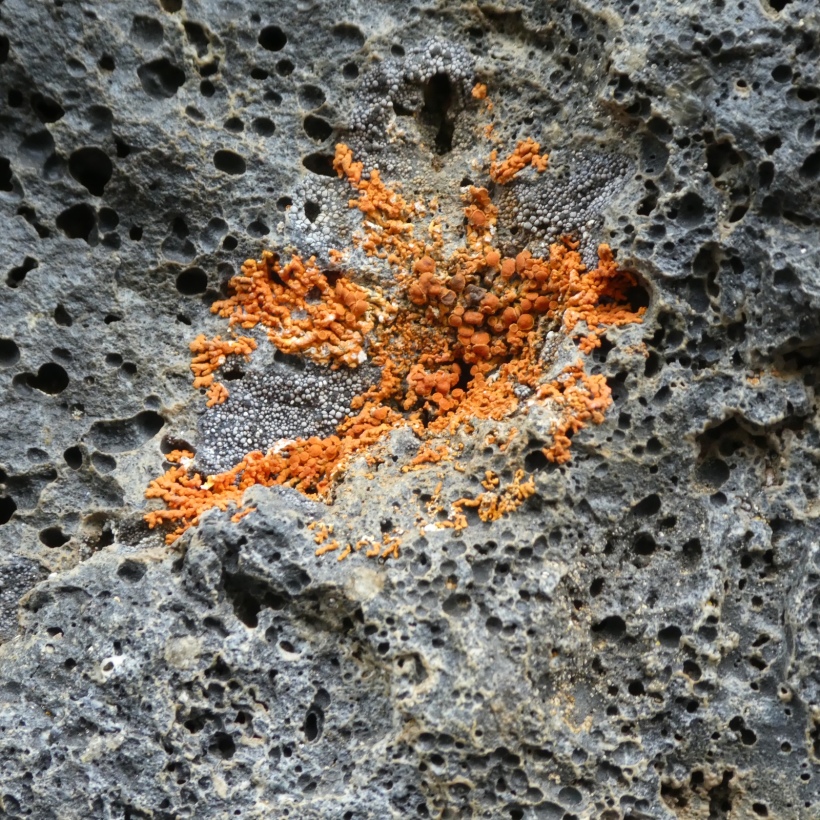 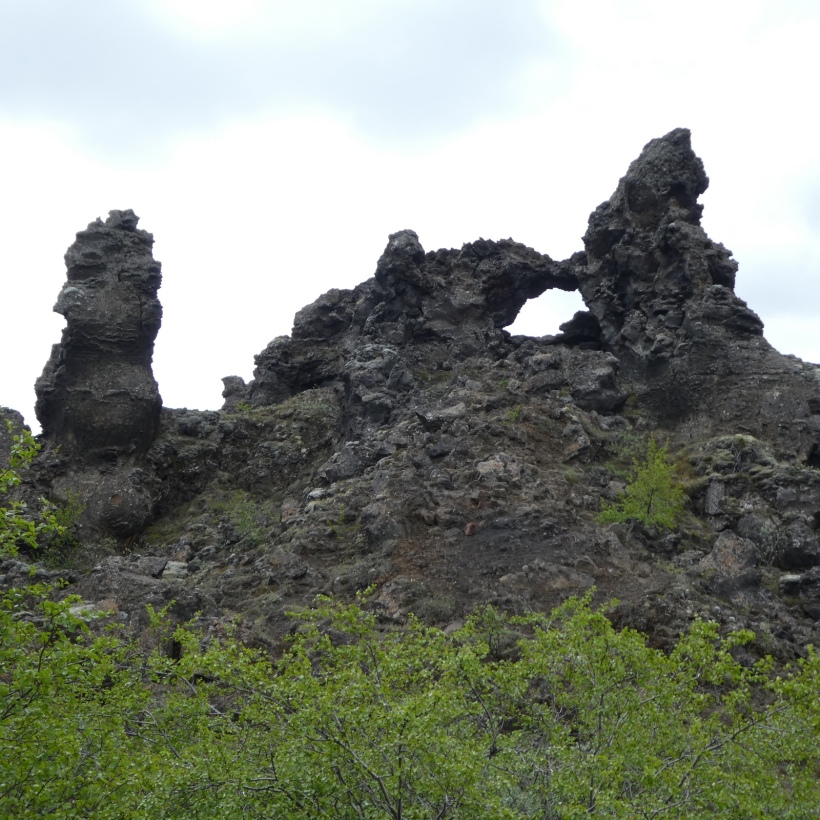 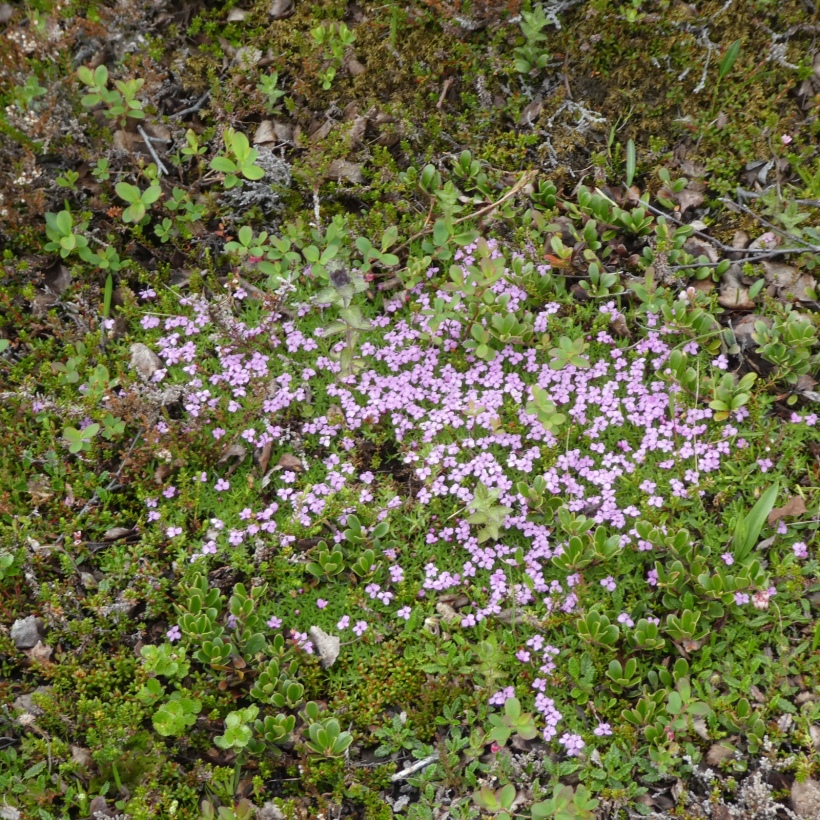 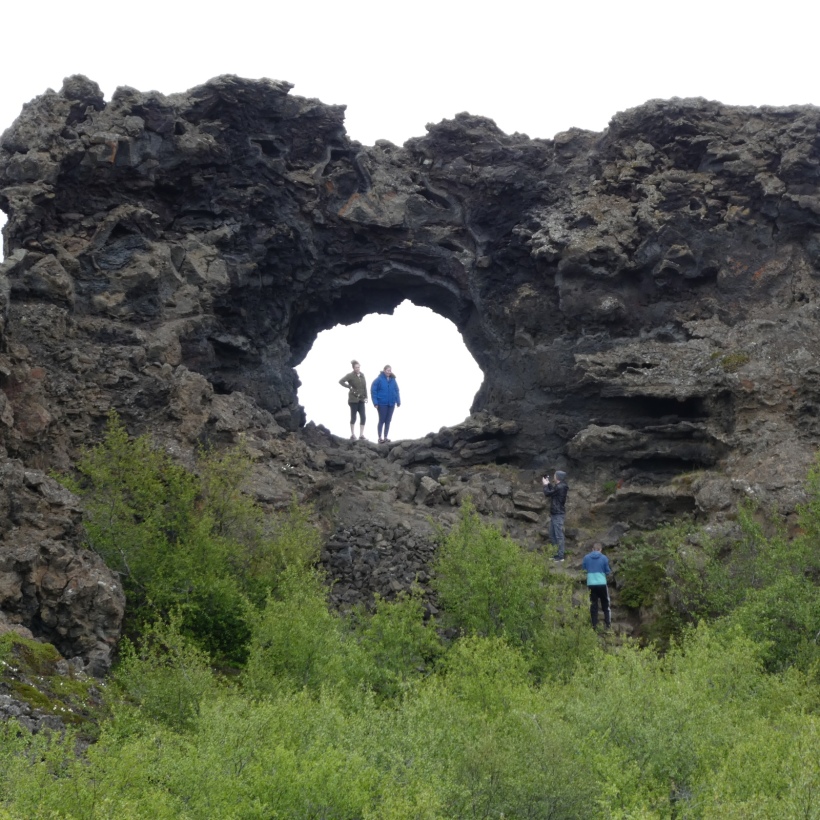 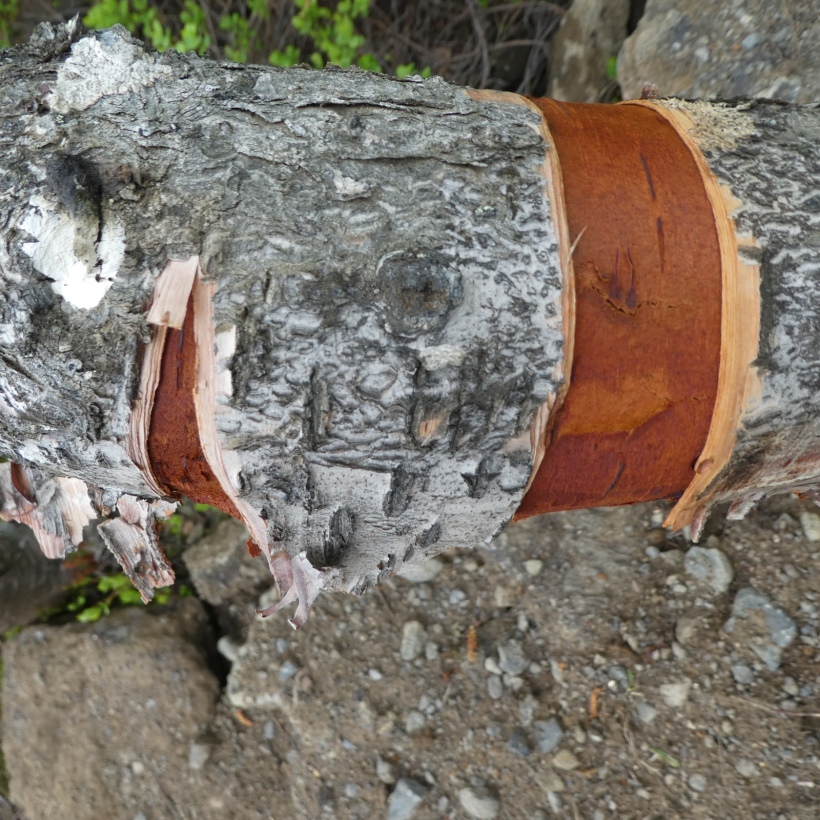 This bird is a Red Wing;.  I learned the name later in the day.

This moss is so soft and squishy.

Another couple of possible homes for the Yule Lads. 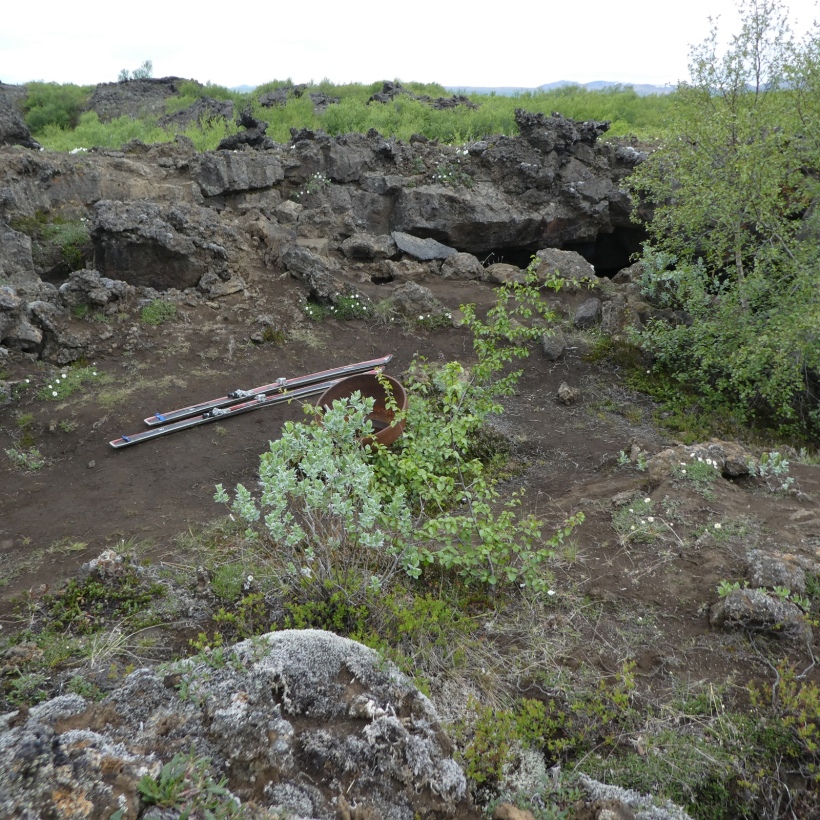 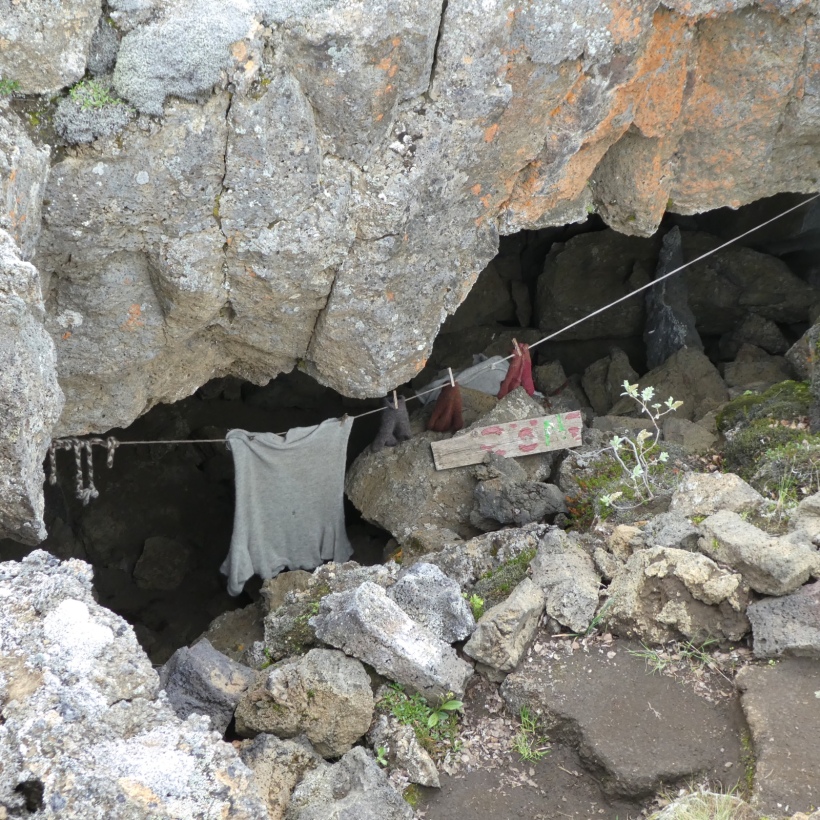 We drove around the lake to the Bird Museum.  On the way we passed many craters in the area called Skútustaðir pseudo craters. but decided that we didn’t have time to take the hike to see all of them   There were many, many of them. This natural phenomena is formed when lava flows over wet ground and pushes the ground down. This causes a lot of steam to be trapped under the weight of the lava which then causes a lot of pressure.  When the pressure becomes too much it causes steam explosions and the formation of these beautiful pseudo craters. These pseudo craters are often called rootless craters as they have no end to them as do normal craters.

Since the bird museum was only going to be open for less than an hour so we decided not to pay to go into it.  The young man at the desk was so knowledgable about birds in the area.  When I showed him one of the gull photos I had taken, he said, ´That is not a gull.”    I used my camera to show him the other bird photos I had taken.  That is how I knew that the bird photo from earlier today was a Red Tail. He named them all and  I will go back to previous days to label the bird photos when I get more time.

On the way back to the car I took a photo of this very tiny bird. It is a Phalarope.  They feed in shallow water and flit about the shore.

Elaine and I had heard a lot about the Vogafjos Cafe, Cow Shed Restaurant.  There are actually cows there and the info about it said that you can watch the cows as you eat a hamburger. That sounded a little weird and wasn’t actually true.  We sat down at a table and looked at the very expensive items on the menu. It is in an actual cow shed (done up very nicely).  There are actually cows there.   I said, “I guess I will have the hamburger.”  Elaine asked me if I was actually going to spend 36 on a hamburger.  I thought about it for a minute and we both left to eat our own food in the car.

We drove by Namafjall.  It is an expanse of hot springs called Hveraröndor Hverir that are known for their changing variety.  I didn’t want to get too close with my camera.

So Elaine and I stood back and used each other’s cameras to take photos of each other.

It was time to head out to Egilsstaðir.  We decided to take a side road off for Dettifoss.  It is a waterfall in Vatnajökull National Park in Northeast Iceland, and is reputed to be the most powerful waterfall in Europe. The water comes from the nearby Vatnajökull glacier, whose sediment-rich runoff colors the water a greyish white.  There was cold low hanging fog engulfing us which made it difficult to get a decent photo of this enormous waterfall.

Then we walked along the path to Selfoss (11 metres (36 ft) high) which is a bit upstream of Dettifoss.  I took a couple of photos there.

Dettifoss and Selfoss would definitely be worth coming back to see on a nicer day.  I would have loved to walk down to the bottom of Dettifoss but we were pretty cold.  It may be important to note that on the eastern bank, the footpath down to the falls is extremely rough and a number of accidents have occurred when visitors have strayed from the track. The grassy slopes on the western bank become extremely slippery when they are wet.

Also, after we left the area  I learned that below Dettifoss,  Hafragilsfoss cascades 27 m into a deep canyon. If we had known, we would have driven to see it.  Some years ago, plans were proposed to harness the hydroelectric potential of the canyon, but they were scrapped when the lava strata in the area were found to be too porous for a reservoir. On the east bank of the canyon, near Hafragilsfoss, the river has cut through a crater row named Randarhólar to expose a volcano’s lava pipe in the cliff wall.

Driving along the road today took us through so many varied landscapes.  We drove through dusty desert volcanic rock that was grey and flat with no vegetation.  Then all of a sudden there were rock walled formations near Dettifoss with the fast, churning powerful river rushing through rocks.  As we drove on the landscape turned to rolling hills of brown volcanic rock. Soon we were again passing through areas with cascading waterfalls coming down through the green hills.  Then we were facing beautiful mountains that had snow on them.  I wish I could post photos of all of this but there were really no places to pull of the road until way after we passed by the scene I wanted to photograph.  It is amazing how few cars are on the road with us, but it is still not safe to just stop in the middle of the 2 land roads.  Here are just three. 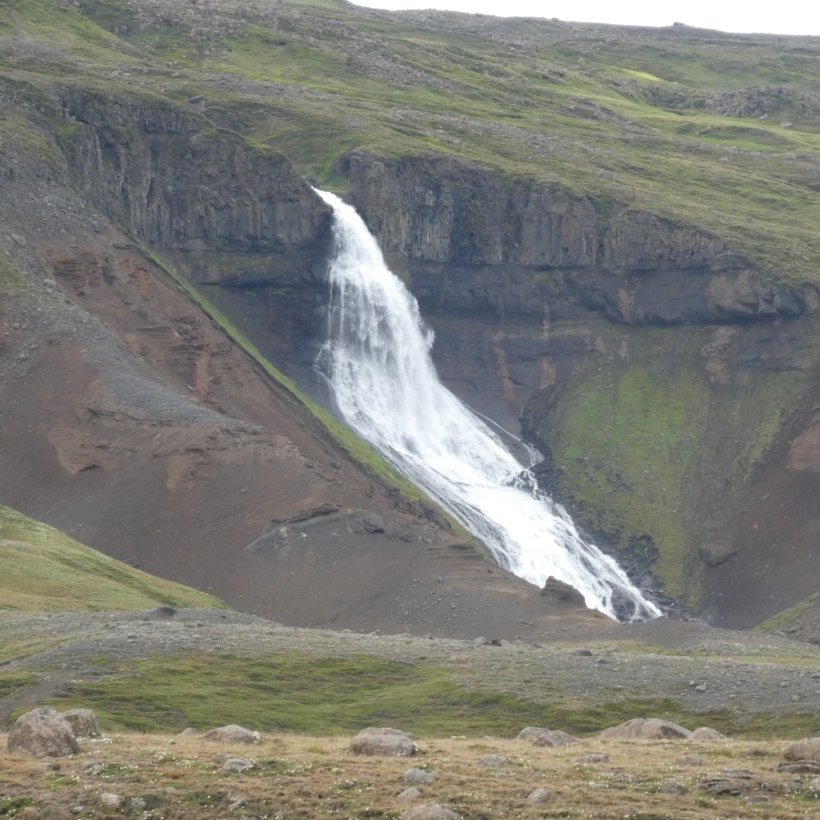 The names on the signposts are so long.  Each part of the word has a different meaning. 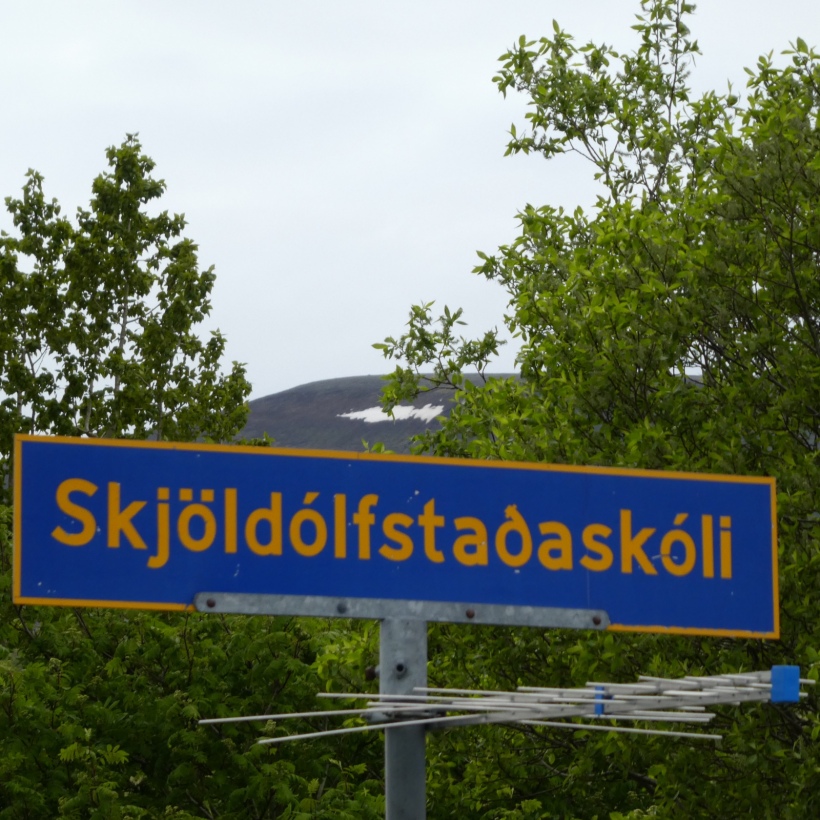 Skjöld means shield;  ólf usually is an ending to a name; staða means place; and skóli means school.  So this must be the name of a nearby school.

At  one point we went by a one land bridge.  We pulled off for me to take a photo from the camper and a car rushed passed us.  I thought it was going to cross the bridge as another car was coming toward it, but at the last minute it pulled off to the side.

We stopped for the night at Egilsstaðir.  The campground is fantastic because there are indoor showers and a place for me to sit and write the blog inside a warm room. The young woman who checked us in told us that there are senior rates for many places and gave us the senior rate for this campground. We will have to ask for that in the future.

Sirrý is extremely knowledgeable about the area and gave us so much wonderful information about where to go over the next couple of days.  She is studying to be a speech pathologist.  Elaine and I both love meeting the Icelandic people and having time to talk with them. 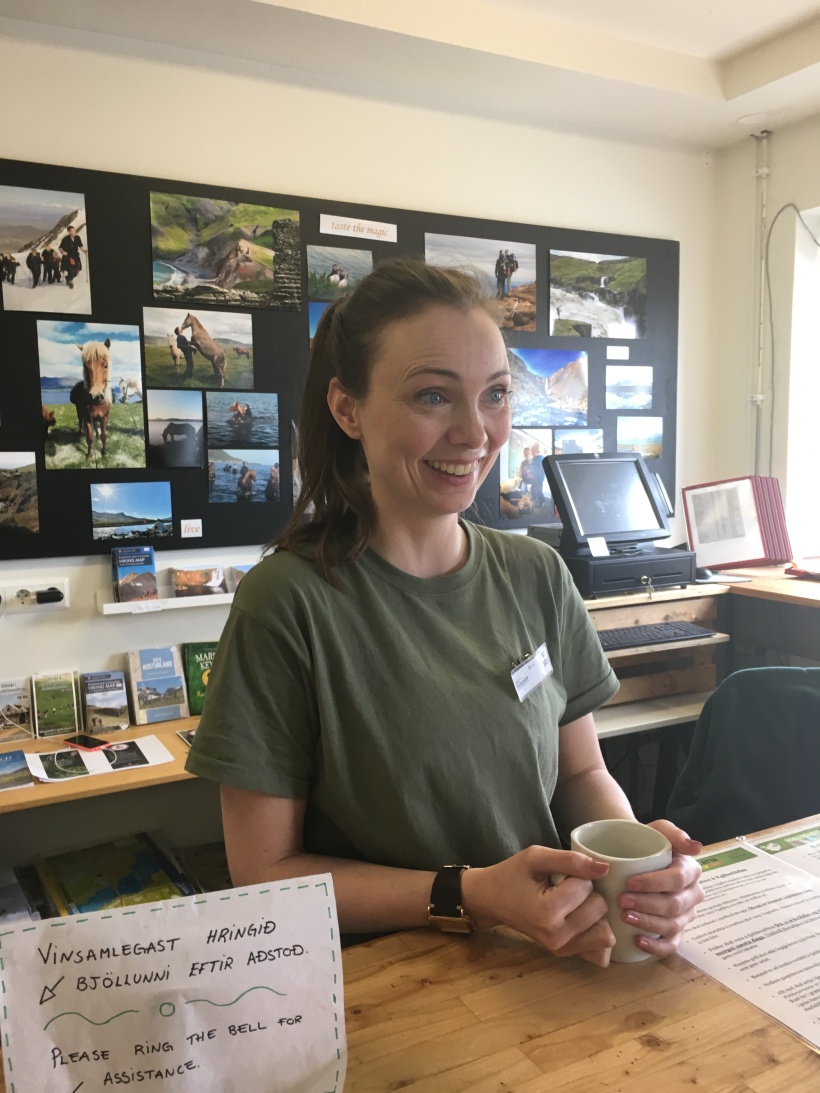