I actually slept for a few hours on the plane.  We arrived in Keflavic at 6:20.  My first task was to purchase sim cards.  That went very smoothly.  Then we took the yellow bus to Go Camper to pick up our Campervan.  Alexander helped us fill out all of the paperwork.   Deciding on insurance took a bit of time.  We decided on full coverage, but there is still a deductible.

Alexander started to put our luggage into the back of the Campervan and then decided that he needed to get a different van for us.  He thought we would have too much trouble getting the equipment out of the one he started to give to use.  He brought us another one and put our luggage into the it.  We had to inspect each and every little scratch.   Here is Alexander explaining how to work the little cooler.  That was the only photo of the van that worked.

It is hard to believe but our first stop was to get food and we stopped at Costco.  It has only been open for a month.  The lines were the longest lines that I have ever seen.

These photos hardly show the length of the lines.

We took off on the road on our way to Þingvellir National Park.  The fields along the road were covered with Lupins.  I thought I was taking photos, but my camera was doing something goofy and doing bursts and I didn’t understand what was happening.  When I uploaded the photos I took today, I discovered that those photos just couldn’t be used in the blog.  I which means I can’t use any of them in my blog.   That is such a bummer, but I am glad that I have a second camera with me.  Somehow, I have also forgotten how to quickly shrink the size of the photos on my Mac Book Air, so I may have to resort to the iPad mini.

Þingvellir (Thingvellir) is a historic site and national park in Iceland, east of Reykjavík. It’s known for the Alþing (Althing), the site of Iceland’s parliament from the 10th to 18th centuries. On the site are the Þingvellir Church and the ruins of old stone shelters. The park sits in a rift valley caused by the separation of 2 tectonic plates, with rocky cliffs and fissures like the huge Almannagjá fault.  We took a walk to see the plates, the church, a small waterfall, and the shelters.

I did get one photo of the rocks along the path. 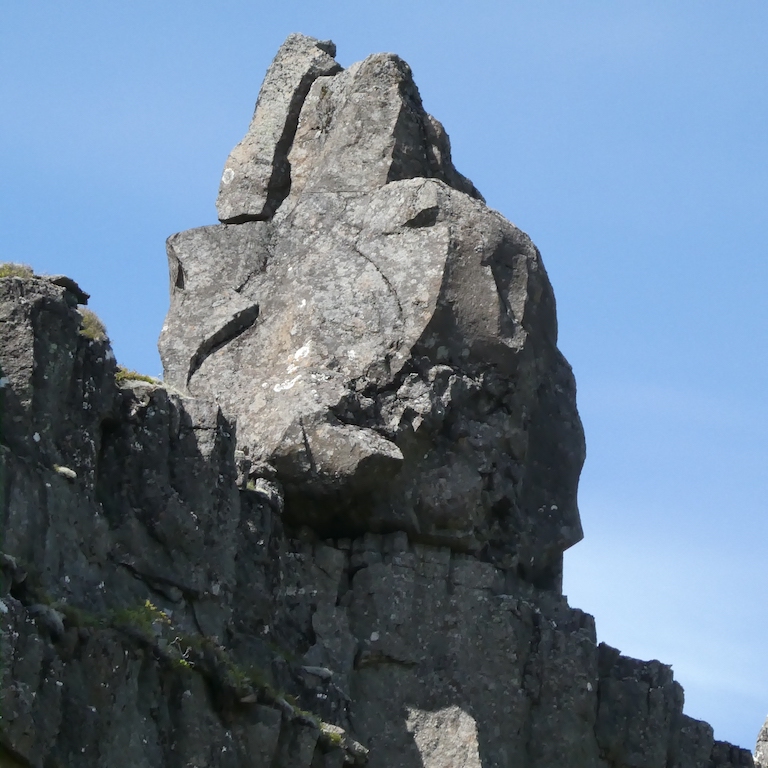 From there we went to the campground.  Dinner was roasted chicken that we purchased from Costco.  We are both pretty exhausted, but we found out that our cooler had stopped running.  I called the company.  They said we had to run the camper for 2 hours with the lights running to recharge the battery so that the cooler would work.  Very, very strange but we followed directions.

The tiny midges around at dinner time were sort of annoying, but not too difficult to handle.  Getting all of our stuff organized to live in this small space is a trip.  I think we may have finally stored things well and we are headed off to bed – yikes it is only 8:00 at night.  The sun is still bright.  The mountains surrounding our campsite are beautiful.  I am thinking that we will likely wake up very early.