Today started out as a rainy day. We were picked up at about 1015 from the Tasman Backpack.   It was raining the entire bus ride to the place where we had to put our gear together for the walk.  The guides told us that there was a possibility that the luggage bags we had packed for them to transport would not reach the destination for tonight because the seas were going to be pretty rough. So we had to bring enough clothes for the night in our backpacks.  I immediately put a patch on to prevent me from getting seasick. I also took one of those seasick pills. I wasn’t taking any chances.

Since it was a possibility that the luggage  was not going to arrive one of the guides carried my CPAP machine in his backpack. We were also told that we needed to have some kind of water shoes with us because we were going to be crossing water and would need to take off our  boots and put on water shoes.

It didn’t take long for us to need to put on the water shoes. As soon as the bus arrived at the boat they said we were going to have to cross some water just to get on the boat. I noticed that one of the guides, AJ, was wearing sandals.  I asked her if she was going to hike in them and if it was gonna be possible for me to do today’s hike just wearing sandals and caring my boots in my pack. She said that she would carry my boots.  I was astounded.

We all got onto the boat and the sun came out. It was such a beautiful day.  They were so right about the seas.   Several people including Jan we’re feeling very sick.  I was very lucky and having an absolute blast. We were going from Kaiteriteri to Totaranui.

I met these four guys (Bruce, Bill, George, and dang – I am having a brain fade) who are from Auckland  We imediately hit it off with a lot of teasing.  They take a trip together every year. 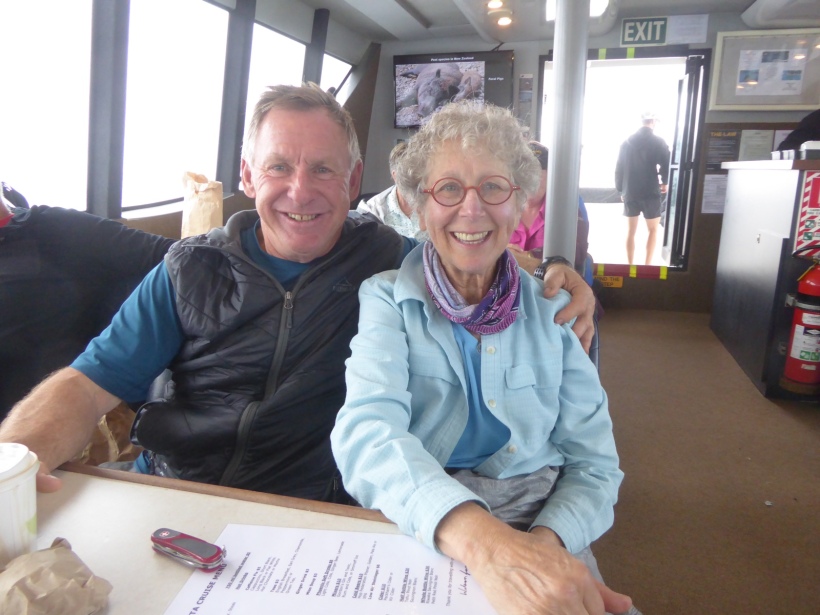 OK, don’t get any ideas. We were all just laughing a lot and taking a bunch of photos.

I realized that the top deck was really the place to be.

The boat was  bouncing a lot and they made us come down to the back deck.   I feel so lucky to not have felt sick.  I really had to hold tightly onto the railing as the boat was bouncing and swaying.

Here are some views from the boat.  Somehow this rock naturally split. I just couldn’t hear what they were saying when they explained it because it was so loud.

It is really hard to tell from these photos how rough the water was.  What a trip.  I was laughing a lot because it was so hard to move from one spot to another.

We reached our destination and began the hike through isolated northern forests and along spectacular beaches. Here are my new friends at the beginning of the trip. 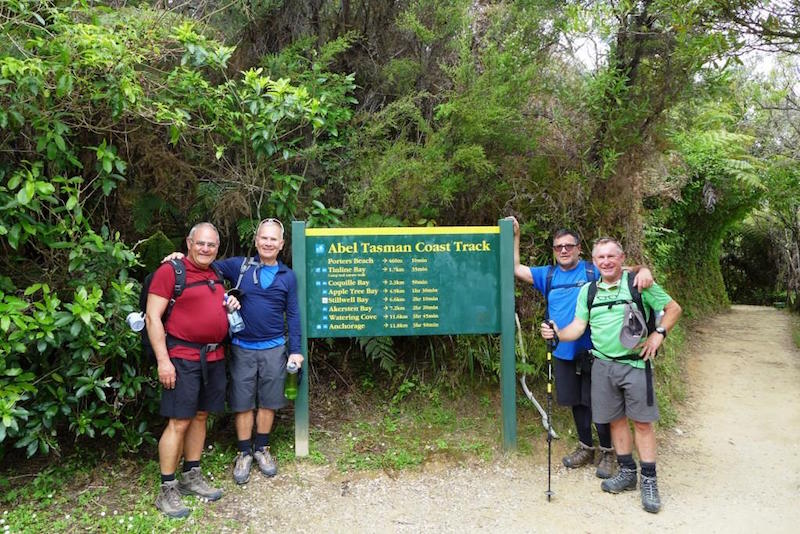 The trail was pretty easy with only a bit of uphill and views of the water were just stunning.

It is hard to express how happy I was to be in sandals and be able to take them off when we reach the part of the hike where we walked along the beach in the sand.

And of course I felt like I was five years old again when I was able to put my feet into the Tasman Sea.  In this photo I am at Goat Bay.

I was able to do go in the water again at Waugarakeke which means flax close to the water.

I got a photo of these Oyster Catchers. At l at least I think that’s what they’re called.

The trail portion of the hike was also wonderful.

I also can’t remember the name of this tree that AJ showed us but it is really old.

I was also able to photograph these Wekas. The are a flightless bird species of the rail family which are endemic to New Zealand,  As omnivores, they feed mainly on invertebrates and fruit.

The guides told us that we were going to have to cross an estuary but I really have no idea what it was going to be like.   I did get a few photos this we were doing it. It was about 500 m long. And these photos do not show the time when the water was up over our butts. 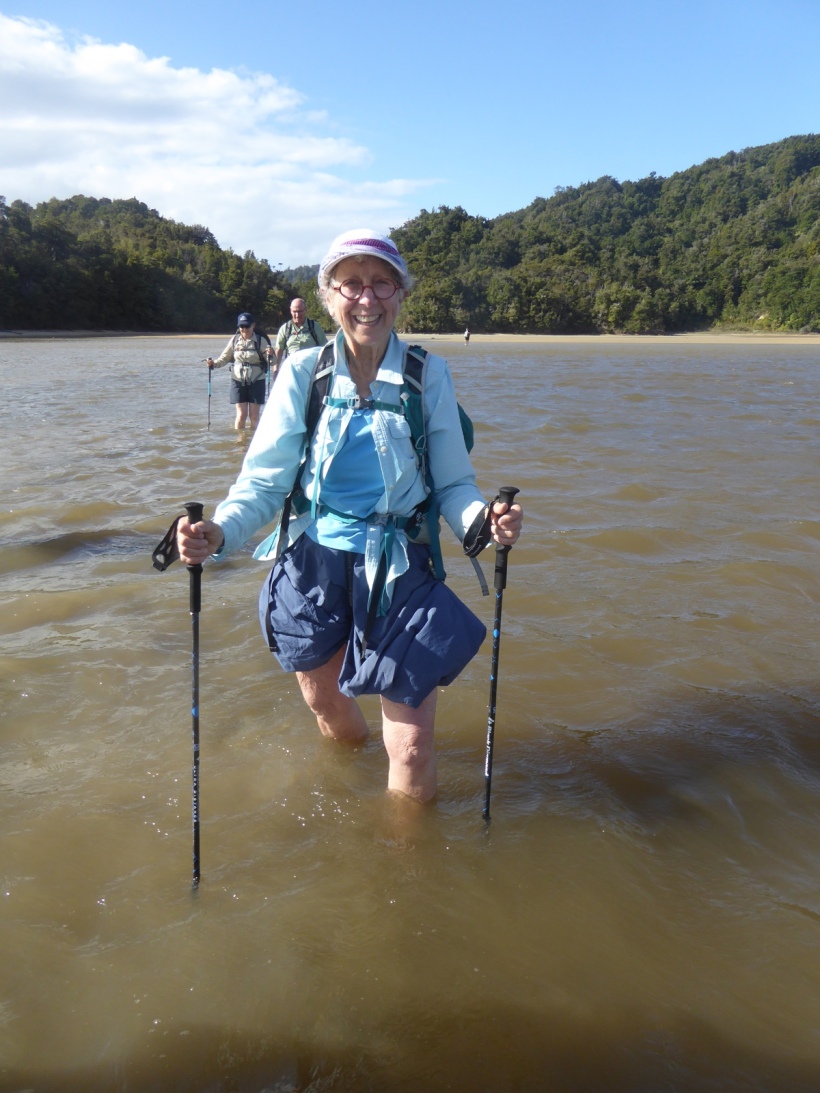 I had my camera my arm up over my shoulder and was holding my screwed up as high as I could. The water came right to the bottom of the my pack. The sand squished below my feet and sometimes shells would get caught in my sandals.  It seemed to take forever. Perhaps this photo will give you some idea about the distance.  At this point I was probably equal distance from each shore.

I am really glad that the water didn’t come all the way up to my waist. It did that on the women who were behind me. The guide said that it has even come up higher than that on previous trips. As crazy as it was, I was having a lot of fun.

We didn’t have long to go after we reached the shore to get to the incredibly beautiful historic Meadowbank Homestead (Awaroa) where we are staying.   I used my iPhone to take the photos of this place and I can’t believe I left the cord for that  connection back in Nelson.   I will try to take some more photos in the morning before we leave here and post them tomorrow.

We were served an absolutely fabulous dinner. I had salmon, a wonderful dessert, and some wine. I think I’m the only one left awake right now because I just had to do this post. I’m so glad that they had Internet for me to use.

Most of the people here tonight are on the five-day hike and/or kayak trip  so they will be staying in the same lodge for another night  and doing some hiking around here before they move on to the next place. I sure wish that is what we had signed up to do. I think there are only eight of us moving on to the next lodge in the morning.  Two of them will be taking a boat for part of the way. Four of them will be kayaking but I don’t have anybody to do that with me and the winds may be high again.   I think Jan I will be the only ones hiking the whole 17 to 19 km.

But all in all this has been the most incredible day. It is what I hope to never forget.