My plan for today was to go on a 32 km bike ride to Rabbit Island and then take the ferry to Mapua where they would pick me up and bring me back to Nelson.  When I arrived at the bike rental place, he told me that his shuttle driver was sick.  If I wanted to do that ride it would be 64 km and I really didn’t feel up to doing that. I have only ridden 15 miles in Portland one time in the past few years.  So change of plans.

First I went to the camera shop to get a card reader so I could upload the photos.  I also went to a computer store and bought the kind of reader that will put the photos on the iPad because I have also been having trouble getting the laptop to connect to the internet.  Oy, the wonders of technology.

Then I went back to the yarn shop.  It was a treat to meet Keren who actually wrote the pattern for the shrug I am going to be knitting.  Here is a photo of her wearing the one she made. Mine will be navy.

I went back to Tasman Backpackers to get my poles.  My plan was to go to see a few more of the Heritage streets and then do some hiking on the Crampians Tracks.

My first stop was to get another spanakopita to take with me for lunch. I walked up the hill to the Christ Church Cathedral.  I believe the tower is over 30 meters high. 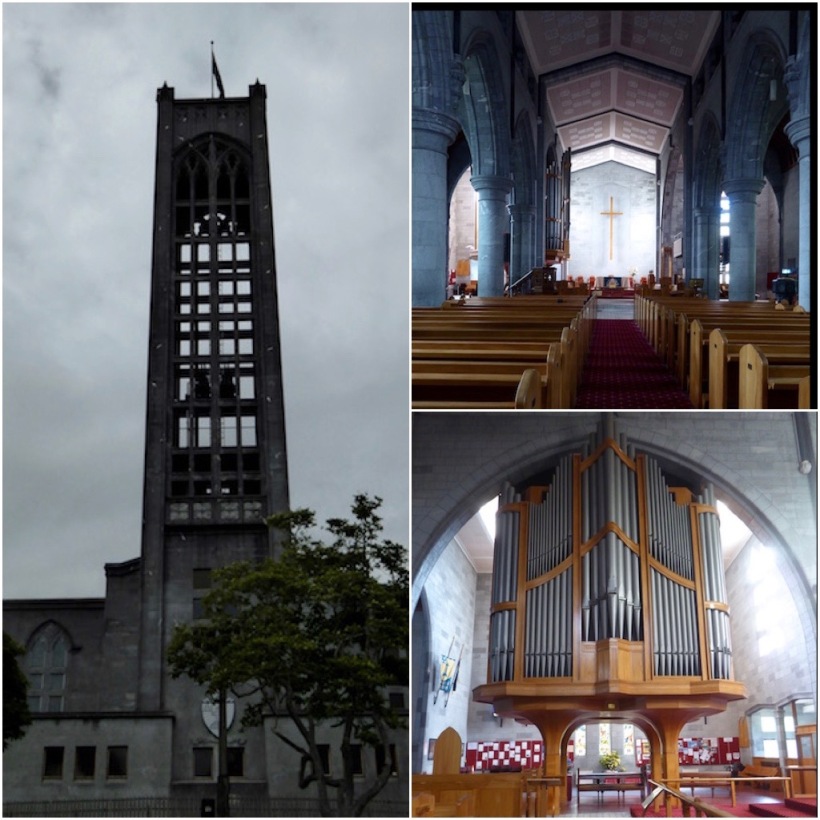 I walked around the streets until I finally found South Street.  It is one of the streets in Nelson that has been designated as a Heritage Street.  Here are some of the houses.  There is information about several of the houses on placards. The one on the upper right is the South Street Gallery.

George Hooper who was a cabinetmaker and builder originally owned the gallery.   He lived in the house from 1866. Later it was an undertaker’s premises as well as being the local cabinetmaker’s shop. It became South Street Gallery when Justin and Lorraine Gardner Nelson potters, decided to upscale their potter business. 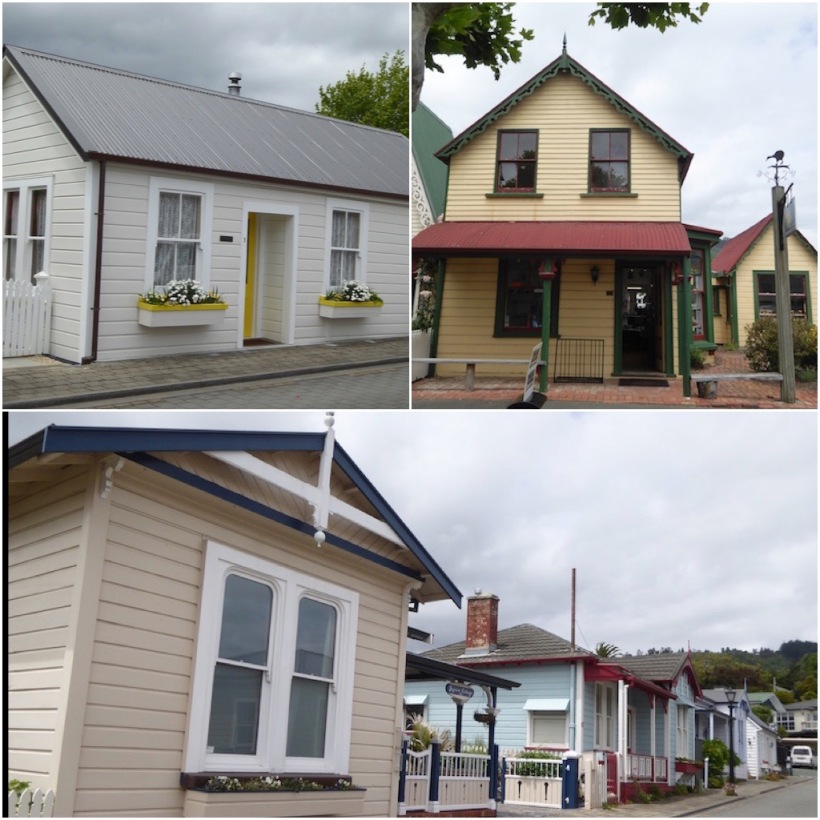 I kept walking uphill and found a placard for Beth Israel Synagogue which had been erected on 29th August 1869. The building was 36 by 24 feet. There were 2 rows of seats for men, a reading desk, and the Ark downstairs and a gallery for women upstairs. The building was used for Jewish worship until 1895.

Jews made up a small proportion of New Zealand’s population, attracted like many other immigrants by the gold rushes. Seven synagogues were erected in New Zealand between 1865-1885, of which 4 remain today. The Nelson building was demolished in 1917. Here is a photo of the original synagogue.

I kept walking uphill, trying to find the Crampians Tracks.  I met a woman who moved here 50 years ago from New York.  She said they decided to leave the United States when they were talking about nuclear weapons.  She told me to go to see the Melrose House. It is one of the last surviving “grand” houses of Nelson.  I was able to walk through the house but I didn’t take any photos.  It is now owned by the Nelson City Council and has a coffee shop that serves lunch.

I continued up the hill and came across the Fairfield House. The tower at the west end of the building was built to mount a large telescope to cater for the owner’s hobby of astronomy.  I asked if I could walk up to the top of the tower and was told that it needed to be inspected following the earthquake that we experienced on the 13th when we were in Christchurch.

The house is now rented to people for occasions like weddings.

I walked around the back of the house and found a track up the hill.  I had finally found my way to the Crampians Tracks.  By this time I was pretty tired.  I wondered around on the trails for a bit and then asked some local people how to get beck down. There is no way I had the energy or time to climb to the top. I must have taken a wrong turn because when I reached the city streets I was not where I wanted to be.

I finally made it back to the center of town where I had another wonderful gelato cone (1/2chocolate and 1/2 watermelon with mint).  They actually did not have any of the watermelon with mint in the case because they make new flavors each day.  But the young woman went into the back to get some that was left over from yesterday for me.

Jan was going to go to a movie of a play with me, but she decided to go up to Center NZ where I had gone yesterday.  So I went to see “The Entertainer” at the Sutter Gallery.  It was performed at the Garrick and was filmed.  That is similar to the National Theater Live performances that we see in Portland.  “The Entertainer” was set against the backdrop of post-war Britain.  John Osborn’s modern classic conjures the seedy glamour of the old music halls for an explosive examination of public masks and private torment.  It was directed by Rob Ashford and stared Kenneth Branagh.  I enjoyed it.

Tonight I packed for the 3 day Abel Tasman walk that we will be starting tomorrow morning.  Our pick-up time is 7:30.  I may not be able to post again until at least next Sunday.

Here are some of the photos from that I was not able to get off of the camera yesterday.  I am nothing less than persistent.

View from our room at Able Tasman Backpack.

Panoramas from the Centre of NZ.

My walk along the Maitai River:

Kids swimming and jumping into the river. 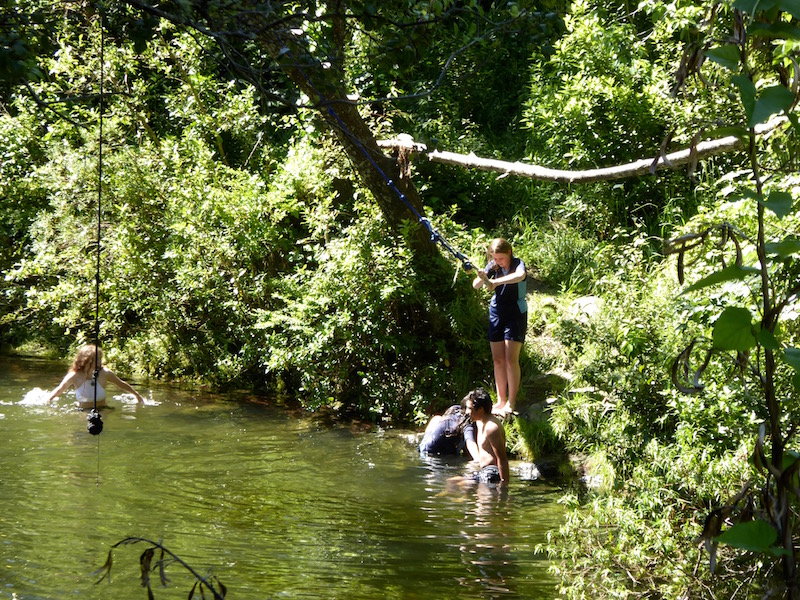 Bridge over the Maitai River

These photos are from the Queens Garden.

This Dawn Redwood was unknown to European botanists until it was found growing in central China in 1944.  Seed was sent to New Zealand in 1949.  A.W. Wastney, Senior New Zealand Forest Service Ranger grew 3 seedlings from the Chinese seeds.  One of them became this tree. 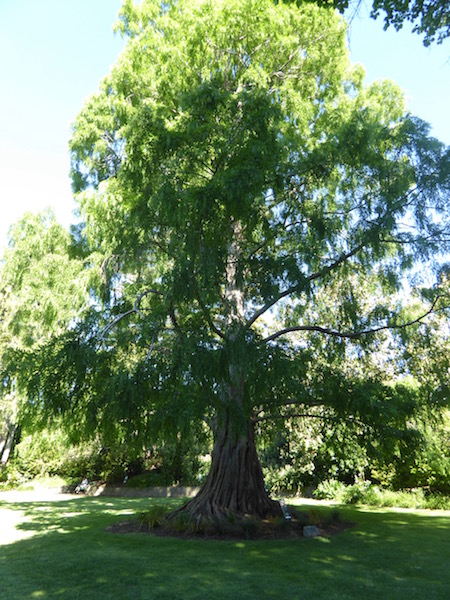 I liked this Purple Beech tree.

Boat sculpture in the water near the coffee shop.

A couple photos from the Chinese Garden.

The mouth of the Maiti River.

That’s all for now.