After breakfast, we drove back to the Busselton Jetty and signed up for the 1.5 hour VIP tour.

After booking our tour, we went into town for coffee and a mocha for me. This statue is outside of the visitor center. It depicts one of the women who came to Busselton to be with their whaler husbands. It was a difficult life

You can only see the beginning of the jetty in this photo.

It was a fabulous tour. Our tour guide, Mary, was so enthusiastic and a joy.

Here are a few of the highlights about the Jetty:

These are part of the original Jetty.

There are seagulls nesting in these rails and we were lucky enough to see the baby seagull chicks.

We pulled over to let the train that takes people out to the end to pass us. 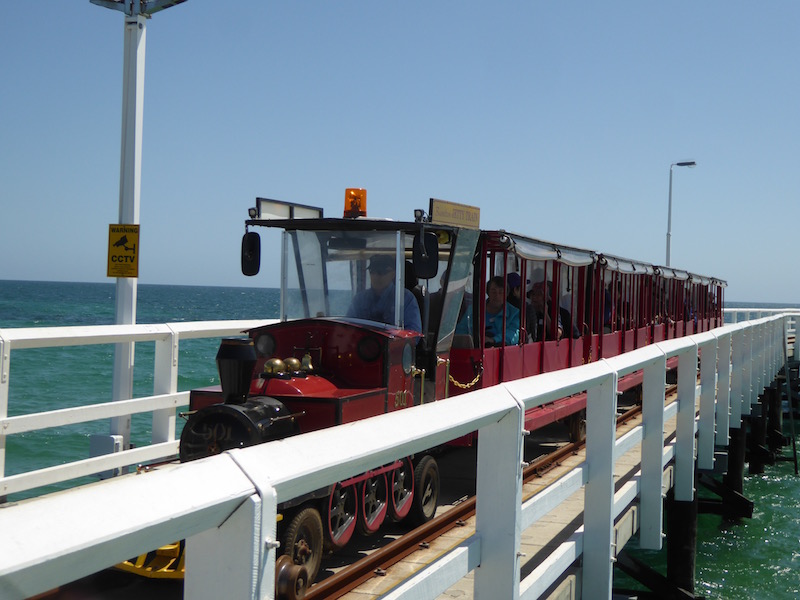 This man was fishing near the restricted area (which is allowed) and he caught a salmon.

We arrived at the Underwater Observatory.

Part of our tour was to walk down the spiral staircase to the bottom of the observatory.   There are windows at each level where we can observe the sea life and the magnificent artificial reef that has formed on the jetty. Some of the fish observed around and on the artificial reef have been:

The photos do not do justice to the colors we saw through the windows.

Although it is hard to see, the Telesto coral (white) is symbiotic with the orange sponge. It retracts inside the sponge when it is done eating.

The purplish stuff in the top photo is Sea Squirts.

A couple of days ago a Southern Right Whale was filmed by one of the workers as it swam under the jetty. They, along with other whales, are migrating from the north down to Antarctica at this time. I wish we could have seen one.

This aerial view of the jetty was on the thumb drive they gave to us at the end of the tour.

This is an aerial photo of the whale mural painted on the end of the jetty. 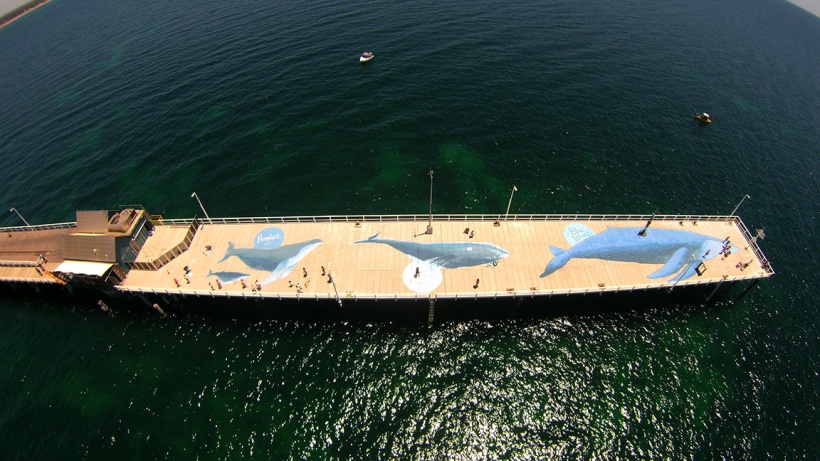 This signpost which shows the distance to may places is by the observatory.

On the way back to the beginning of the jetty we saw these men using carts to bring their fishing gear onto the jetty. 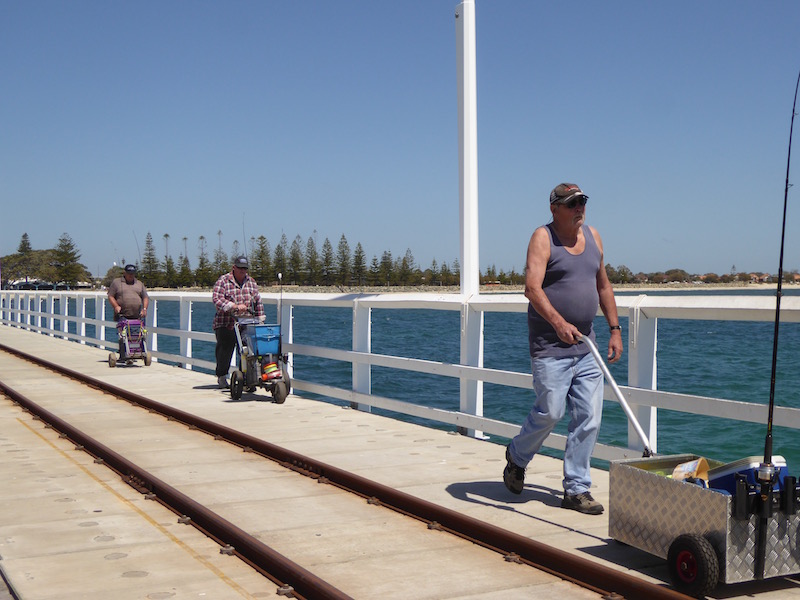 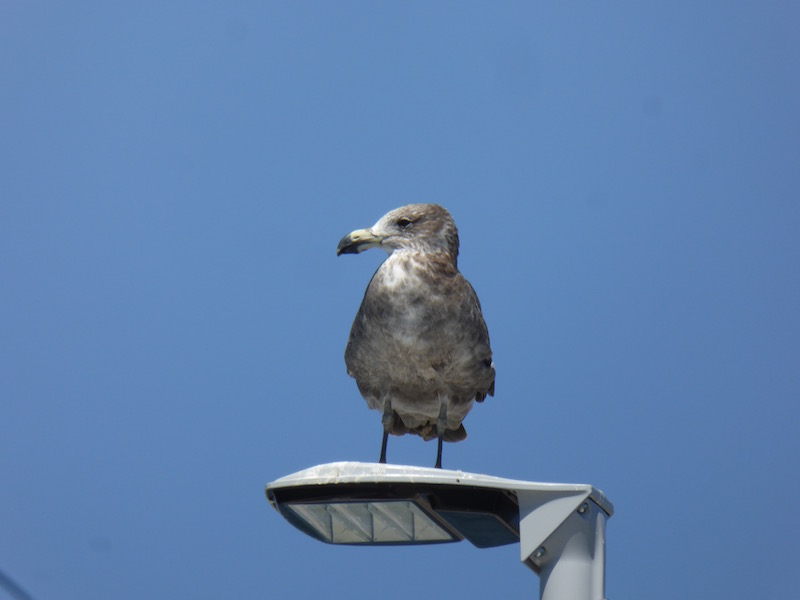 Jan, Rose, Lyn, and I had a great time with our guide. She dropped us back off at the entrance.

We shared a fish and chips lunch and then went shopping in the town. Jan and Lyn wanted to shop at the OP (bargain, resale) stores. I bought vegetables for our dinner salad (It was my turn to make dinner – no laughing).

Of course I had to stop for gelato at the local store that makes their own gelato.

We stopped at Dunsbourough for tea and coffee on the way back to Margaret River. Then we drove to Gracetown and took a walk on the cliff to see the sunset. We walked along a wonderful path.

There were beautiful flowers along the path and on the cliff. 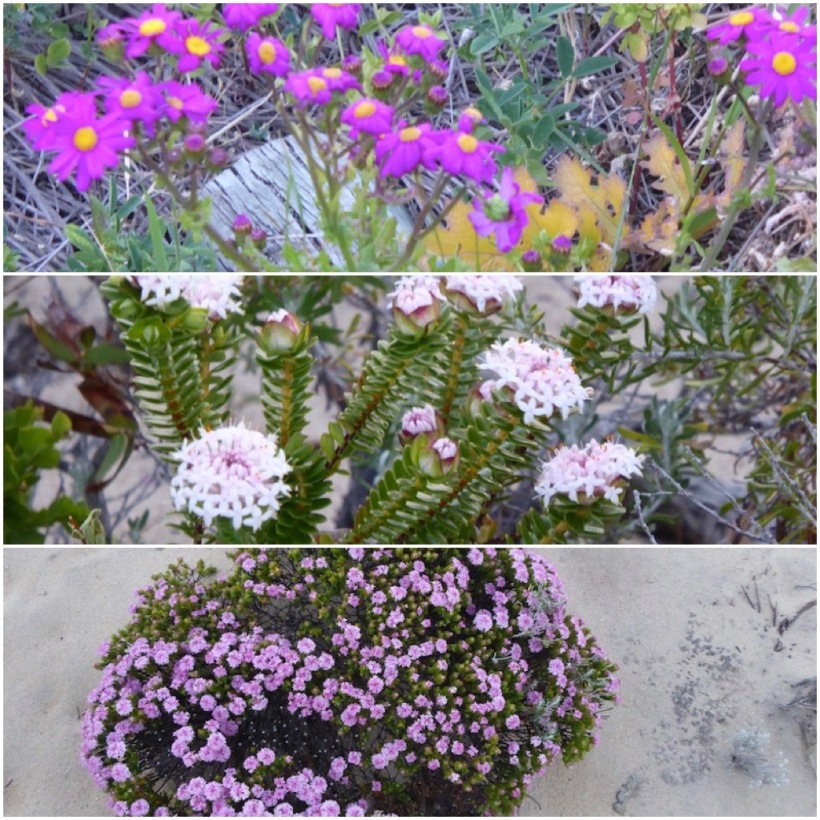 We passed a memorial to the 4 children and 5 adults who were killed when 2000 tons of rock collapsed on them during a rainstorm in 1996.

Tonight’s sunset was not as spectacular as last night…

… I love to walk on the path and the cliff.

Here is some more info about Australia.

Good news is that Rose seems to be feeling a little be better.  She was able to spend the whole day with Jan, Lyn, and me.