Campfire at the Heart is such a peaceful, beautiful place to be.  I have been enjoying walking among the Eucalyptus trees, listen to the birds, sitting in the grass, looking at the cacti, and just generally feeling good.

Rose, Sue, Kate, Sharie, and I went to visit the Alice Springs Desert Park.  It is a place where people spend the whole day but we only had a couple of hours.  The first thing we saw were a couple of Dingoes  I sure hope I get to see these in the wild sometime on this trip. 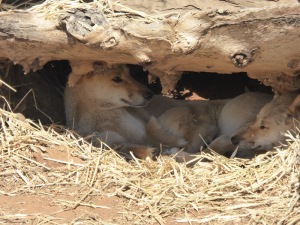 Rose, Kate and Shaire went to the bird show which is similar to the one we have at the Oregon Zoo.   Sue and I went to the small  bird sanctuary where their was no screen between us and the birds.  We also visited other sanctuaries and the nocturnal house.

Now for Interplay.  I didn’t know what a Monk’s and Mystic’s Interplay event would involve.  I asked Sharie (Rose’s friend from Seattle) and she tole me that it is, “an active and creative way to unlock the wisdom of your body using singing, storytelling, movement, and stillness.”  I had no idea that it would be so much fun.

We began yesterday with some breathing and movement.  Susanna Pain and Betsey Beckman are the leaders.  Since this blog is actually my journal, I am going to try to record some of what we have done to help me remember the activities.  It may not make sense to anybody reading it.

Betsey told a “Creation Story” that she had read.  It was from the perspective of a black man.  She also talked about Saint Frances.  We sang a song and used motions to go along with the song.  Here are the words.

Then we each individually found an item or place that spoke to us and spent some quiet, alone time.   After a while we met in dyads to share what we were feeling and thinking.

Then we had some time to ourselves. I met a woman, Farida, who lives in Alice Springs.  She was only able to attend the workshop for the 1st day because she is a doctor at the hospital and needed go to work.  She shared a poem with me.  Here it is.

Before dinner we were invited to go to the labyrinth.  What a fabulous experience.  We were all walking around the beautiful labyrinth at the same time.  It didn’t matter if you were passing somebody or not.  I felt so at ease as I was walking around.  One of the participants decided to do the whole walk with her eyes closed.  A couple of people did it barefoot.  This is the largest labyrinth I have ever experienced.  I loved passing a little yellow flower both going into the center and returning out.

The following photos were taken the next morning.  You can get an idea of the size because Pip was sitting in the middle praying when I took the photo,

Here is my little yellow flower.

After dinner we gathered in what they called the “Prayer Room” to share.  Susanna told us about an event that was going to happen in town the next night.  From what I understood, it was going to be a “Lament.”  This is the 50th anniversary of Pine Gap which is the American base in Australia.  The event would also be lamenting the Frontier Wars (the wars with the aboriginal people when Australia was settled).  There was quite a discussion with varying opinions being expressed about whether we wanted to attend.  What impressed me the most was the way that Susanna and Betsy honored each person in the group and made sure that everybody was personally give a chance to speak.  If I had any anxiety about what activities we were going to be invited to do during this workshop, this experience removed any of them.  I was fully ready to participate.

They begin each morning with a “Prayer Time” at 7:30.  So far I haven’t been interested in that part.  Since I stay up writing the blog at night, I just want to get up and shower in the morning.

Today the theme of our activities was, “Water” and we were first driven to a place called, “Clay Pans.”  Because there has been so much rain, there was water there.  Susanna was waiting for us to gather in a circle.

We were invited to move (dance) around in the space.  I immediately took off my candles and headed to the water.  The muddy clay bottom squished between my toes.  I love it.  Other people joined me in the water.

Then we did some activities with partners. In one activity, the first person would get into a shape and the other person moved around them.  Then we would switched roles.  We did this with several partners and then as a whole group.  Of course, we had time to share feelings and thoughts after the activity so I will probably stop writing about the sharing time after this.

After several activities we had bush tea (or Billy tea) that David had prepared for us.  He made the tea in a Billy Pot over a fire he had built into the sand.  We brought banana bread as a snack and it was great with the tea.

Terri walked back out into the water.

I found this activity exhilarating. Betsey asked us if a group of us would be willing dance in the water again while Sharie took photos. This is just another example of the respect the leaders have for the group.  She had told us last night that she wanted to do some filming and some people said it might make them feel self-conscience and interfere with the activities for them.  Some of the people who didn’t want to be filmed, sang music for us as we danced.  I loved participating again.

We were then driven to another place called Stevens Gap.  There is not apostrophe because although this place was named by white people, it doesn’t belong to anybody.  David told me that it is ‘Tyureetye’ Country. We started up the Gap and I passed this beautiful tree on the ground. 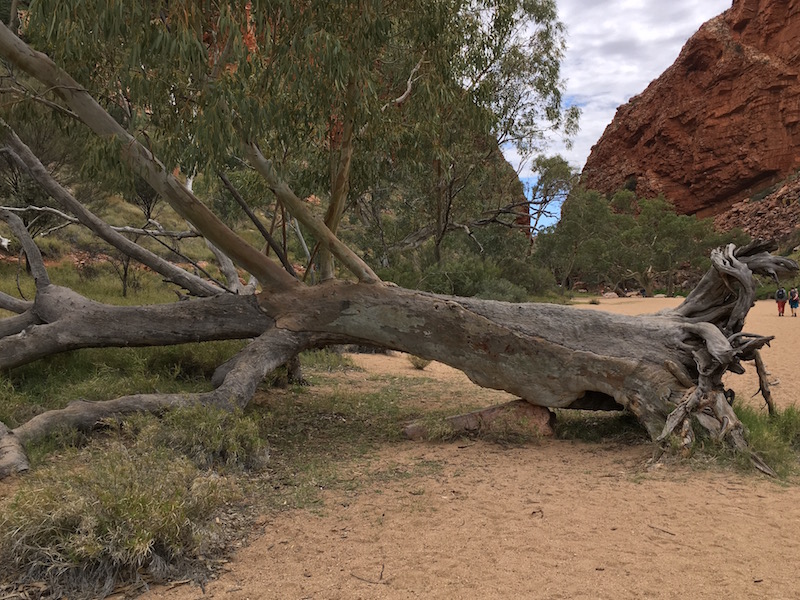 Some people walked up a path and others took shoes off and walked through the stream.  I looked at the Gap and immediately took off my candles. 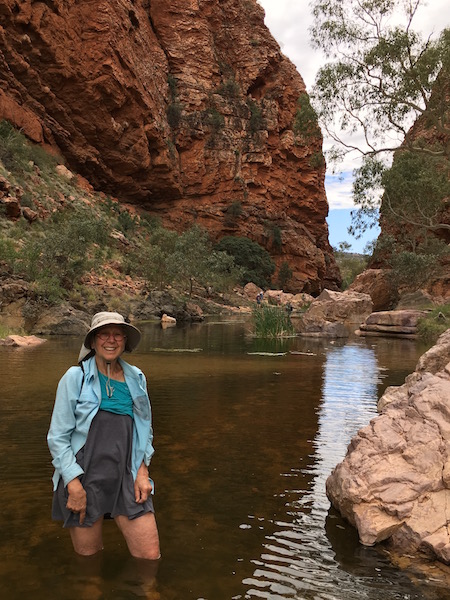 Kate (who is from Alice Springs) also took a photo of me on what she called, “The Throne.” 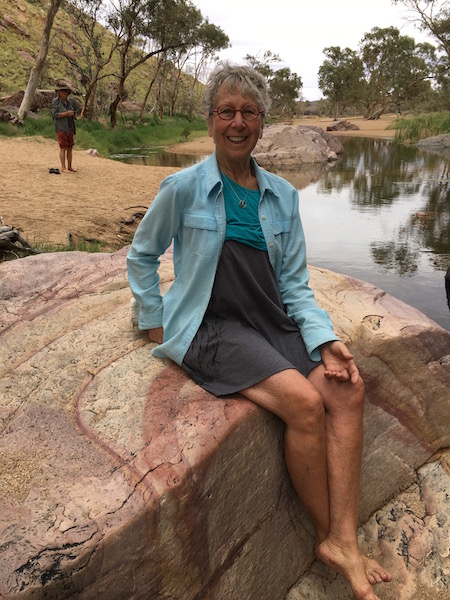 It was cloudy (which was perfect) and even drizzled a bit.  We gathered together under a shelter.

We sang another song together called, “River Chat”  and, of course there were movements to go with the song.  The words are so beautiful so I had to look them up so I could add them to this blog.

Part 1
River, river where do you flow
with your water the colour of tea,
Golden red in your sandy bed,
do you flow to the wide, green sea?

Part 2
No, said the river, I flow in land,
Sink down deep among the rocks and the sand,
Under the gidgee and the mulga tree,
Where the desert people can drink me.

Betsey told us another beautiful story about water, letting go, and rejuvenation.  She again danced as she told the story.  These photos hardly capture the beauty and power of the story, her story telling, and her dancing. 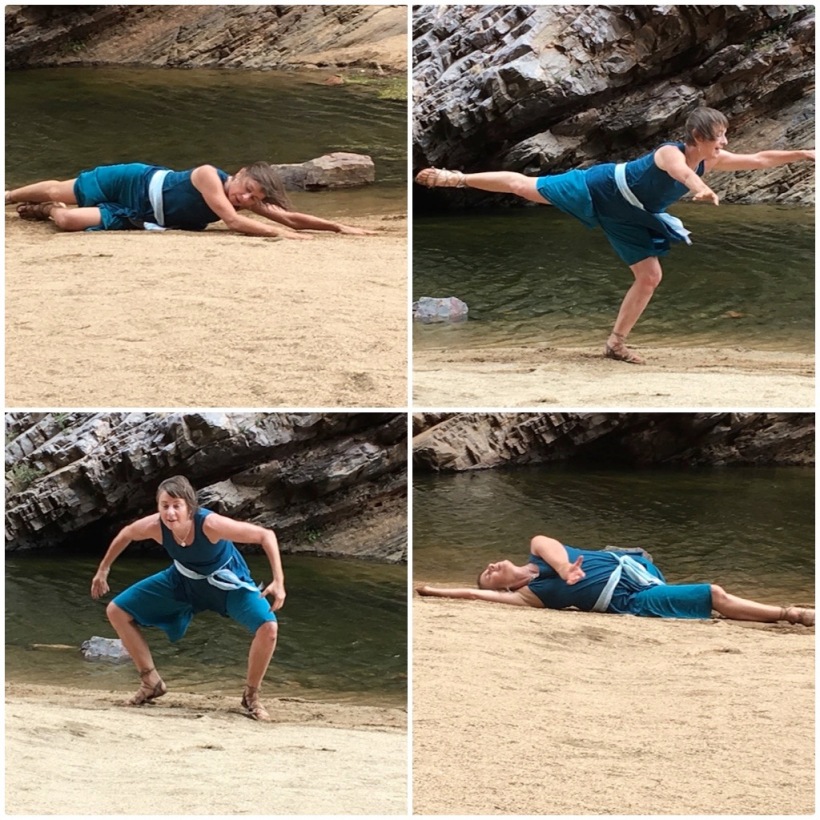 We were given time to reflect on our time there.  I had been looking a a small spot on the other side of the stream …

… so I crossed the stream, walked around the spot and took some photos.

On the way back, Pip showed me a hollowed out tree.  It was sure beautiful.

When we got back onto the bus, David showed us the caterpillar he was bringing back.  He found it on a Rosie Doc which he was pulling out (remember they are unwanted weeds). 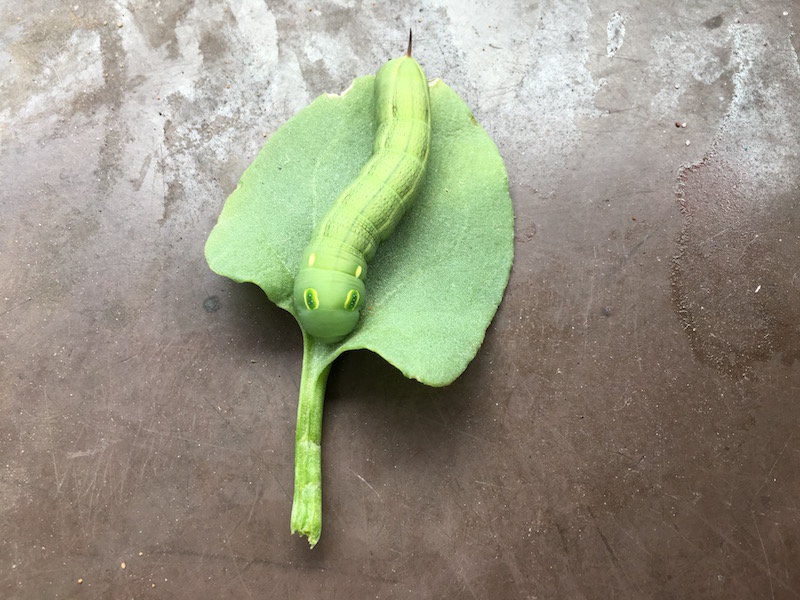 It crawled on and off the leaf and even pooped.  When we got back to Campfire at the Heart, David put it onto a branch where it would find better leads to eat. 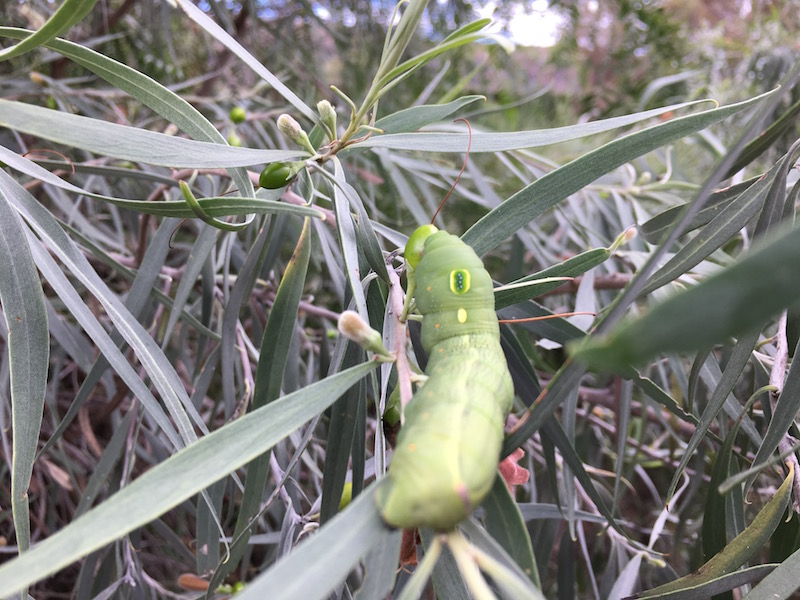 After a great lunch we had some free time.  Then we gathered again and laid on the grass, experiencing the feelings in our bodies.  The we did, “Babbling” exercises, movement and word activities, and sharing with various partners.  These are activities that are common to Interplay.  I thoroughly enjoyed myself.

Susanna then asked who was going to go the lament after dinner.  We formed two circles with the people going in the center.  We sang to each other and moved together.

After dinner a few of us went to ANZAC which is a Memorial dedicated to all those who have served in defense of their country. 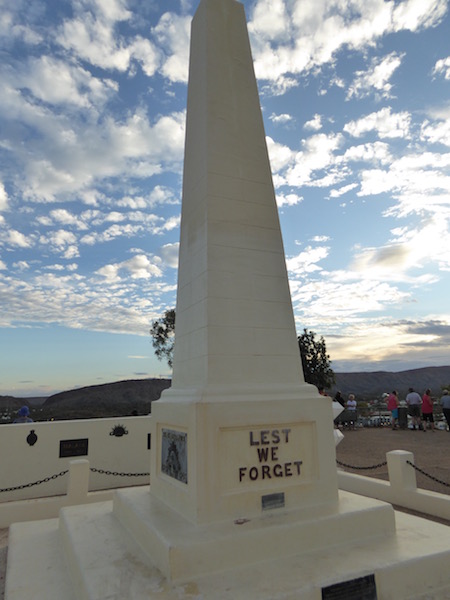 I really wanted to attend this event.  I have attended many protest marches in the U.S. but I had never been at a lament.  There was a fire created in a  container and lanterns hung by the peace flags.  .

The speeches were very different from those at our protest marches..  Stories were told about Frontier Wars and the speakers talked about the loses from all of the wars.  There was an Aboriginal man who spoke about the history and his family’s experiences during the Frontier Wars.  It was apparent that persecution still exists.

It was difficulty to get good photos because it was getting dark.  The flag in the background of this photo is the Aboriginal flag.

The people at the event were asked to share ideas about how we were affected by the wars.  Performers sang more songs and poems were read. The music that was played by a violinist, a guitar player, and a use player was melancholy.  The speaker gave a time for everybody to lament with sounds.  It had the feeling of a community event.

At one point the Aborigine man put something into the fire that produced smoke.

Each of us was invited to walk through the smoke and lament the losses we felt.

The Aboriginal men led us in more songs.

Towards the end we were invited to put a piece of wood onto the fire either silently or with words we were feeling.

It was a very moving event.

I stay up way too late doing these posts, but it is important to me to record as much as I can remember of my days and nights.  If I don’t, it will all become a blur by the time this 11 week trip is over.

Tonight I finished by midnight.  I am looking forward to more interplay tomorrow.

5 thoughts on “Interplay, Campfire at the Heart, and the Lament”