I have been continually overwhelmed with amazement and joy on this trip. The icebergs all around us are breathtaking. Watching the penguins is just pure joy. We were surrounded by mountains covered in snow. This is such an incredible experience.

Our first landing today was Port Lockroy.  You can see some of our group already there as we approached it in the PolarCirkel boat.

In Morten’s photo you can see the MS FRAM in the background. 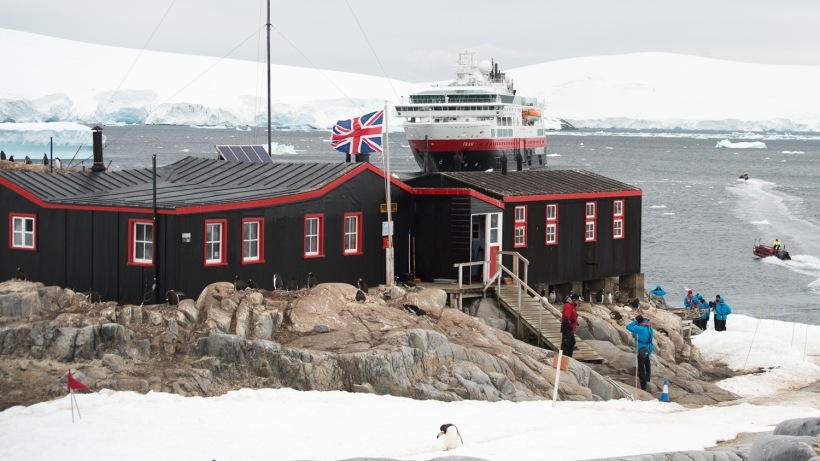 Here is a little history of Port Lockroy.

One of the volunteers  (there are 7) from Port Lockroy came onto our ship this morning to tell us about Base A.

Port Lockroy base is now a museum that recreates accurately the conditions in which men lived and worked on a British Antarctic base in the 1950s.

The kitchen coal stove.  There was also an old hot water tank in the room.

The Nissen hut erected in 2010 replaced the one that was built in 1944.  It is used for accommodation and storage.

The equipment and supplies found at Port Lockroy were recovered from other abandoned British bases and all of them have been cataloged.

Here are a couple of the paintings that are on the walls where the men slept. 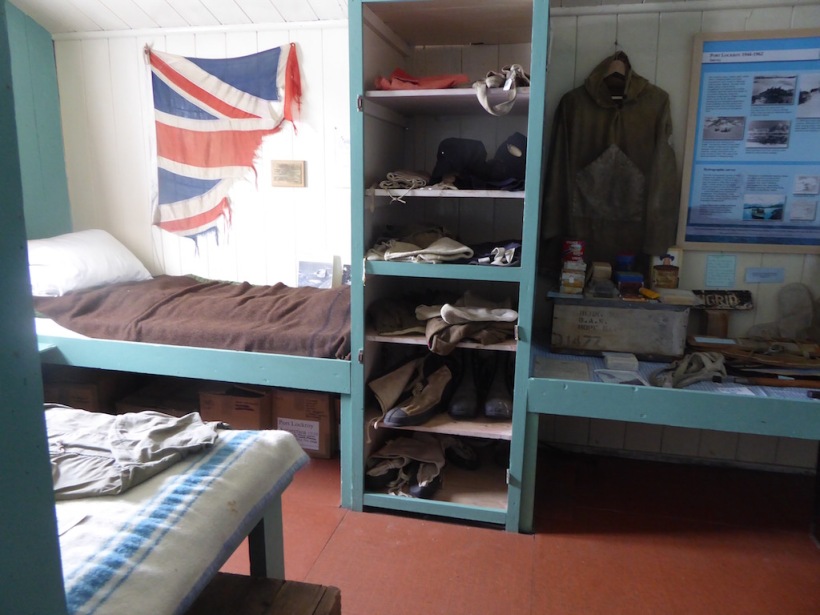 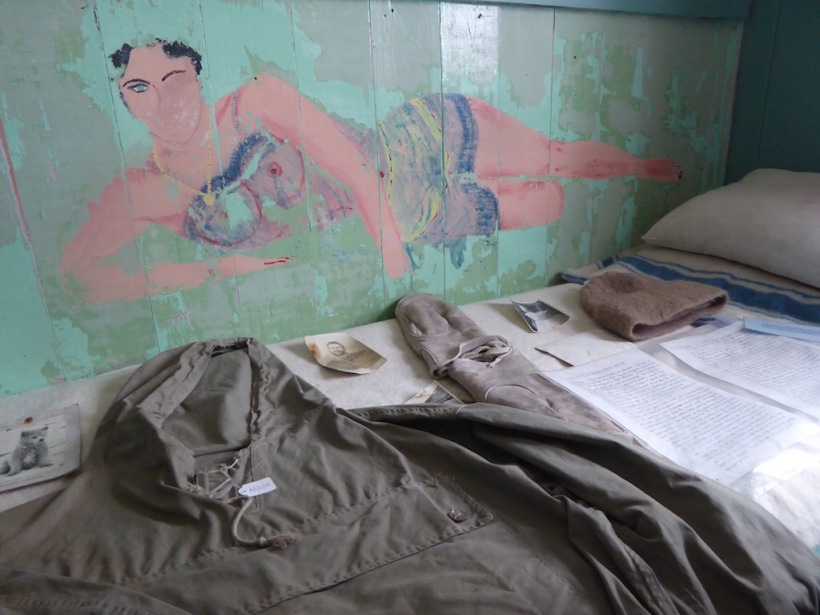 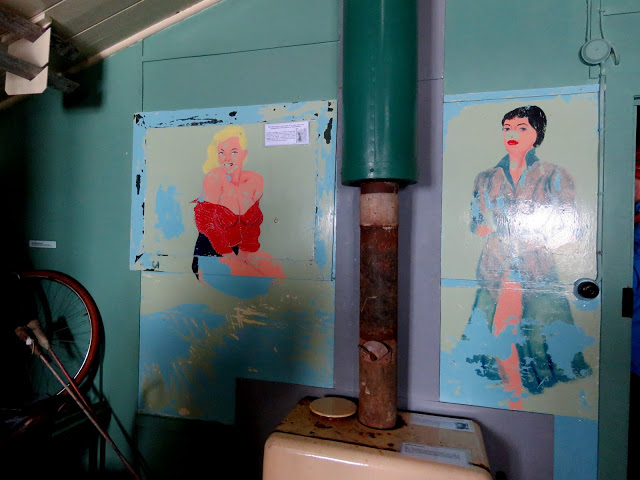 Some of us  went shopping in the store. 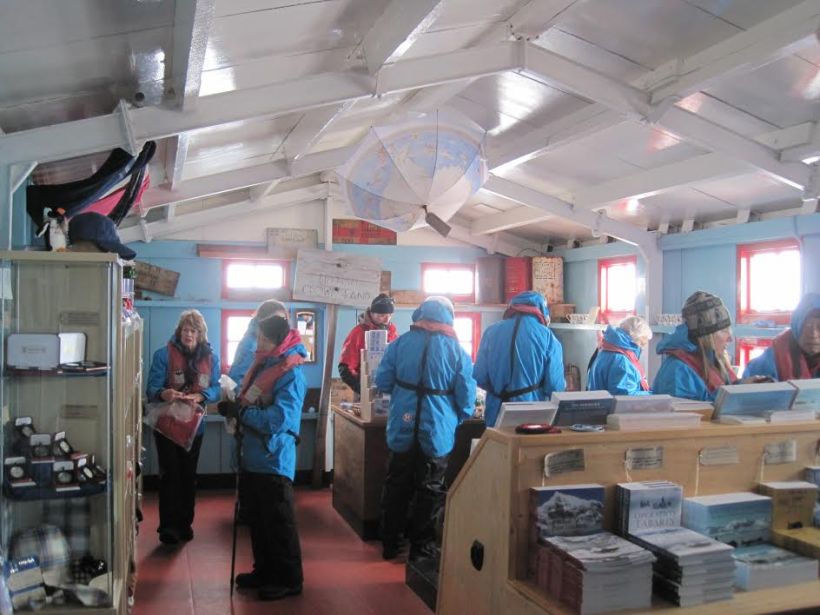 I mailed postcards from the base. They may arrive by spring. First the go by boat to the Falkland Island. From there they are flown to Great Britain where they are sorted and then finally sent to their destination.

In the afternoon Ann and I had the opportunity to go kayaking in Paradise Bay. To do that we had to give up exploring the Argentine Base called Brown. They took us to land on Sanavirón Peninsula to get on and off the Kayaks.  So it was our fist time to actually step on the continent of Antarctica. Up to this point we have only been on the surrounding islands.

The Kayak trip was absolutely beyond any words I can use to express. My only regret is that I was discouraged from taking my camera because of getting the neoprene gloves on and off, but that was a huge, huge mistake. The weather was absolutely perfect so I didn’t need the gloves. Ann had her iPhone 5 with her. I used it to take photos and the wonderful staff on our ship transferred the photos to a memory stick that I bought in the ship store. The staff on this ship are so helpful and accommodating.

Back to the kayak trip. It took a lot of energy just to put on all of the clothing equipment that we had to wear.

Here is the list they showed us at our kayak briefing meeting of what we had to wear. 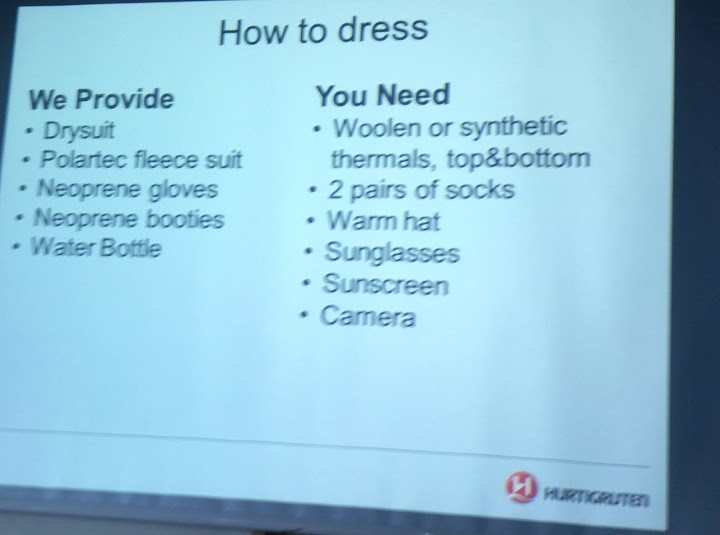 Here are Ann and I (standing on the actual continent of Antarctica) all dressed and ready to kayak.

The morning kayakers had a lot of wavy water and were very cold. Our water was like glass. We were kayaking right next to icebergs

…and going right through floating ice with spectacular views of the mountains.

Although I don’t have a photo, penguins were swimming right near us. Weddell Seals were resting on icebergs.

At one point the front of our Kayak was right up on an small iceberg and we had to back off. 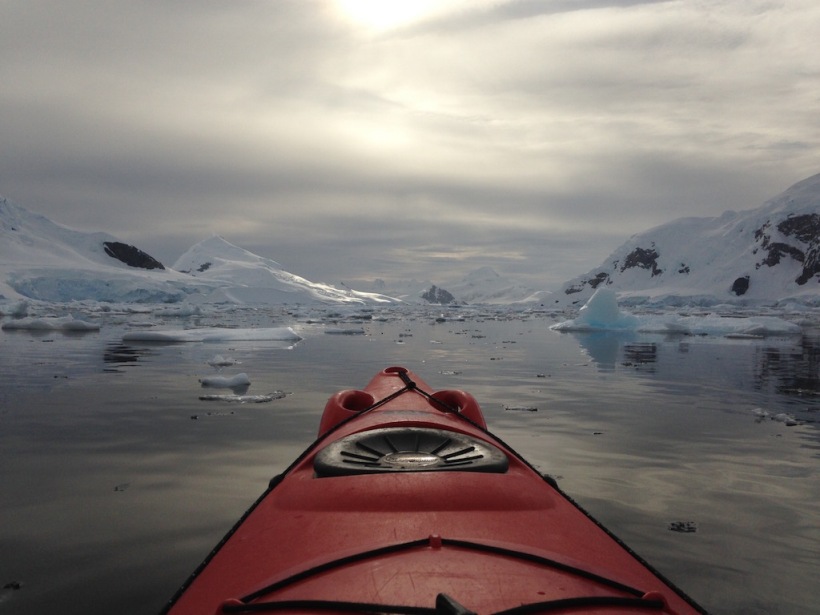 We heard the loud booms as Avalanches were letting go. There were several booms but we couldn’t see them. Then finally we saw the snow crashing down the side of one mountain. Amazing! Hours and hours  and hours after our Kayaking,  I was still floating above the ground in wonder.

Oh yes, I received another certificate.

Since we stayed out so long on the kayaks and Ann and I had to get back to the ship for a birthday party for Joni, we didn’t have time to visit Brown Base. But I thought I would just record some info about the base. Brown Base is located on the mainland ne’er Skontrop Cove in Paradise Habour. It was named for William Brown, an Irish Immigrant who became a national hero in Argentina and is known as the father of the Argentine Navy. In 1984 the station’s Doctor went slightly mad and burned the base down. All seven members of the base were subsequently rescued by the American research vessel, Polar Duke.

The Argentinians sent down a crew every summer to rebuild base but, as many other Argentine bases, it has even closed in recent years.

Even though we weren’t there, Morten took a couple of photos. 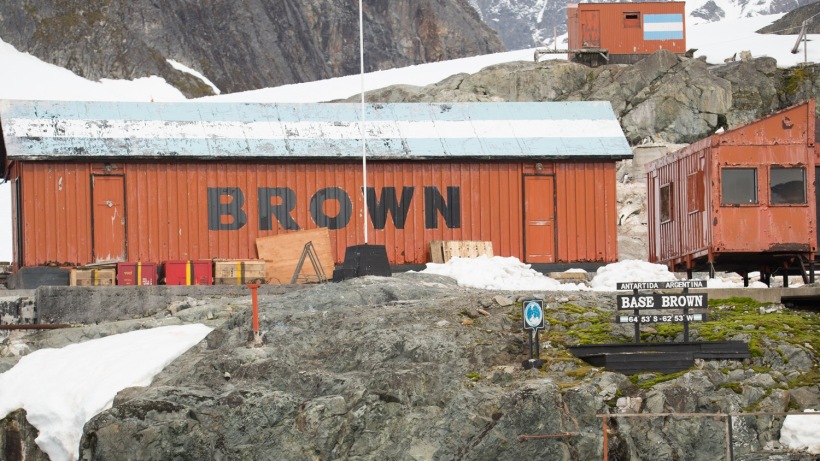 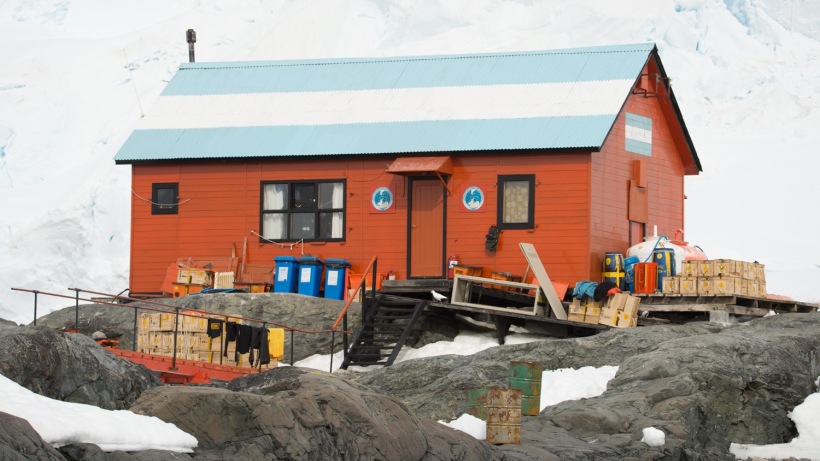 Many of  our Portland friends did go to Base Brown.  Some of them hiked up a steep snow-covered hill and were able to slide down a steep hill.  We could see them (like ants) at the top of the hill from the Kayak.

That is where I think Andy took these photos of Sylvia, John and himself. 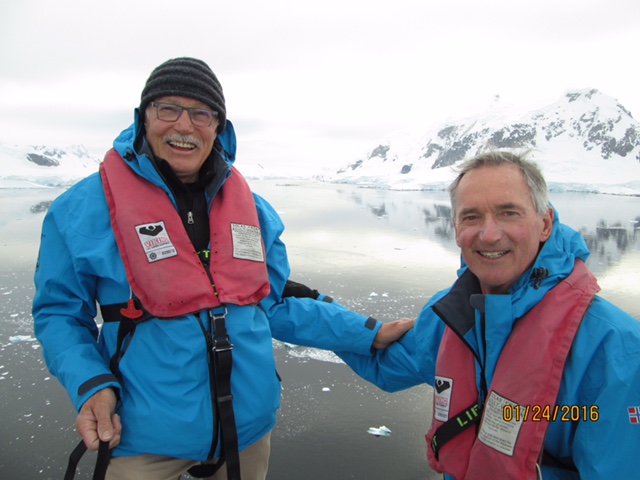 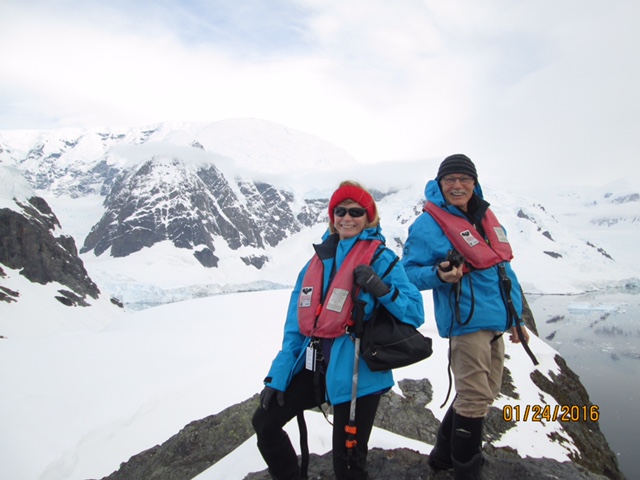 We reserved a table for some of our group for Joni’s Birthday Party.  The staff made a cake for her and sang for her. 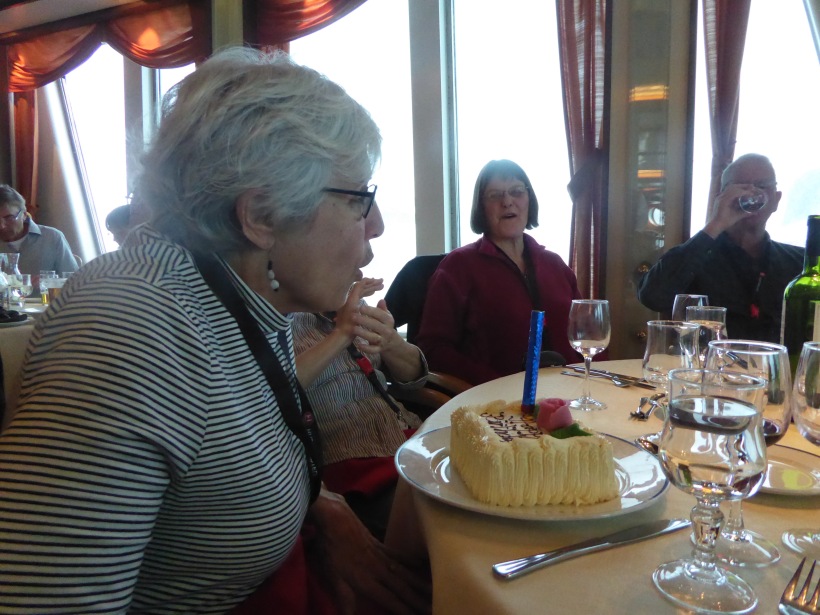 We are staying right in Paradise Harbor tonight because they don’t know if will be possible to get through Lemaire Channel in the morning.

As I was sitting by a window writing this blog, a Humpback Whale just dove down I and I saw the whole tail. We are surrounded by mountains.

At 22:00 there was a Q & A with the Captain, hotel Manager, Chef, and Chief Engineer in the Panorama Lounge on Deck 7.

I think we only have 2 days left to go ashore before we head back up Drake Passage.

4 thoughts on “Port Lockroy and Almirante Brown Base”