Today we were navigated into the Antarctic Sound.  The captain was hoping to make landings at Esperanza Station and Brown’s Bluff but it was not possible due to the ice.  The staff got together and adjusted our schedule.

Here is the map provided by the MS FRAM of our travels for January 19th through 22nd.

You can see the navigation routes from this above map.  Our landing sights are much easier to understand by looking at this fabulous map created by Fred Perry, a new friend we made on this voyage.

The new plan had us stop in Kinnes Cove and land on  Joinville Island.  It is the largest of the 3 island at the tip of the Antarctic Peninsular.  Joinville Island was discovered and charted in 1838 by the French expedition commanded by Captain Jules Dumont d’Urville.  He named it for Prince Francois, Prince of Joinville.

We got off of the PolarCirkel boat and made our way over the rocks. 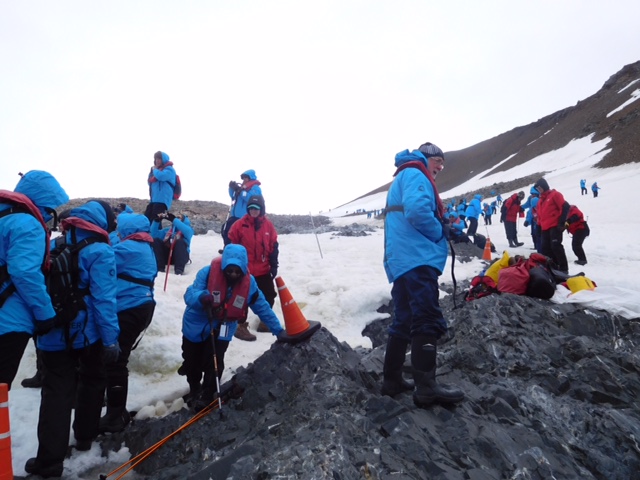 We climbed a steep, snowy, and slippery slope.

Ann said that I went higher up than she did. Anyway, we found a rookery of Adelie Penguins.  You can tell they are Adele because they have a black head and a white circle around their eyes.  I think this was the only time we saw Adelie Penguins.

A distinctive mark of an Adele Penguin is the white ring surrounding the eye.  They are a little smaller than other penguins.

Sitting on the nest.

Walking across the rocks

Walking  and sliding across the snow 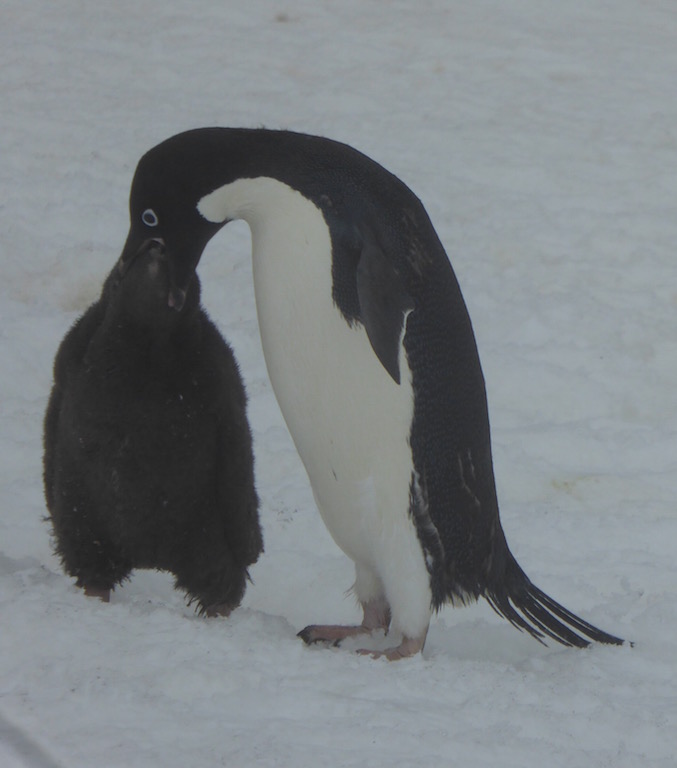 Morten’s photo of and Adelie Penguin chick being fed just makes me smile.

I call these the happy penguins. 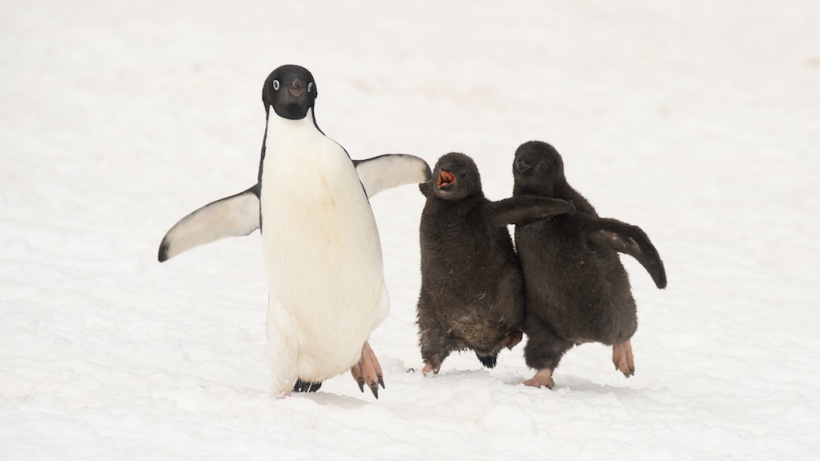 And here are a group of young ones with an adult.  Groups of young penguins together are called crèches. We were told that there is usually at least one adult watching over the young ones.

“Esctatic Display”  I think this is what they call the talking that penguins do. 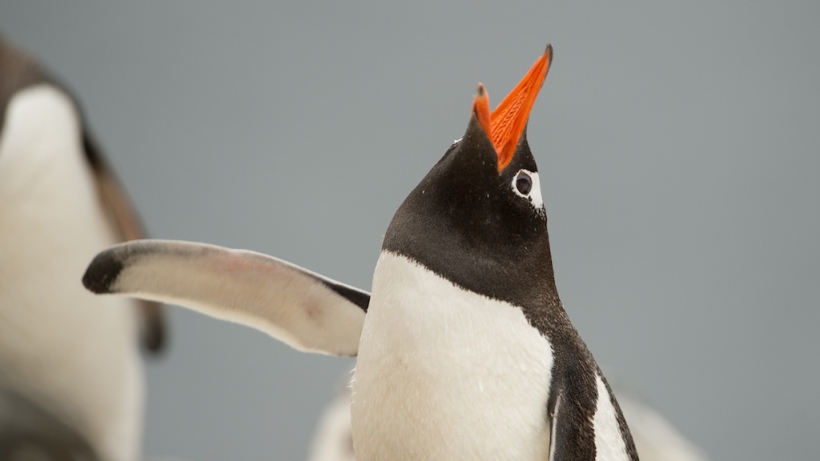 This Adelie Penguin is bringing a rock to the nest. 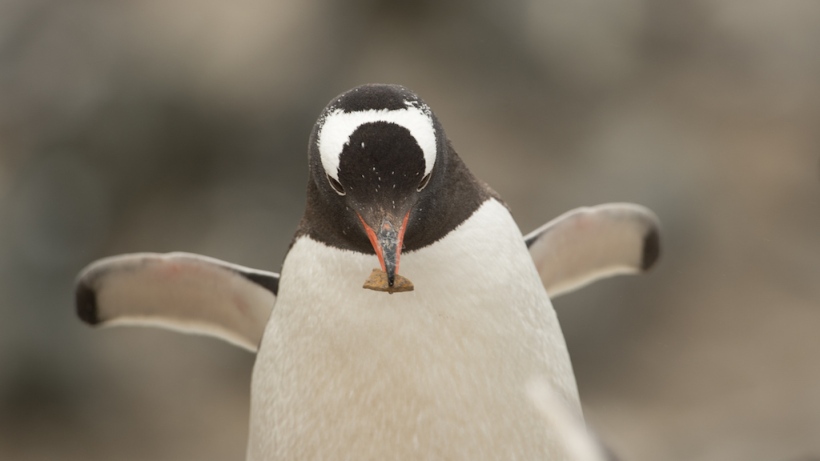 At one point today I actually saw one of those Skuas swoop down and steal a penguin chick. 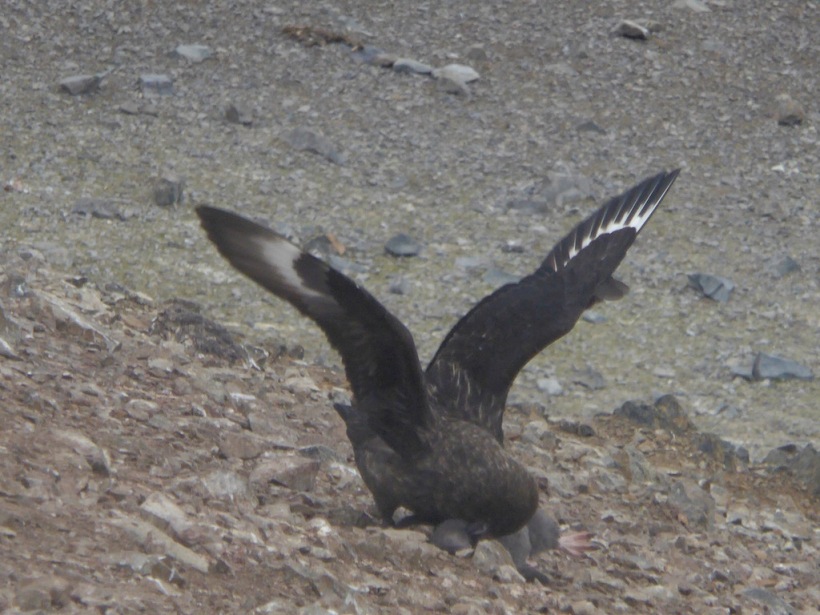 The second Skua also wanted part of the chick.

Pat Burnett got a photo of some Snow Sheathbills. It is the only land bird besides the penguins that is native to Antarctica.   They do not have webbed feet. They steals krill and fish from penguins and sometimes eats their eggs and down-covered chicks. They also eat carrion, animal feces, and, where available, human waste. 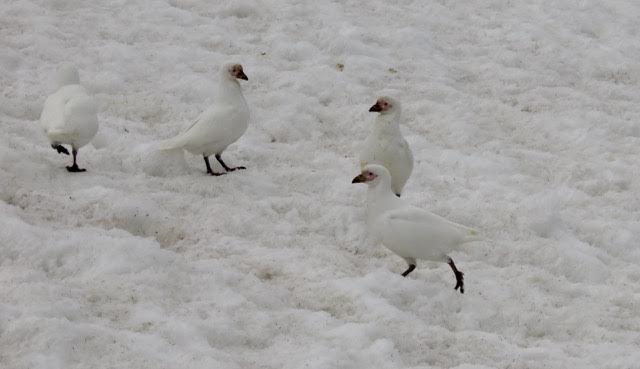 Some of us were chosen to do our  PolarCirkel Cruise today.  We had to put on special suits to go on the cruise. 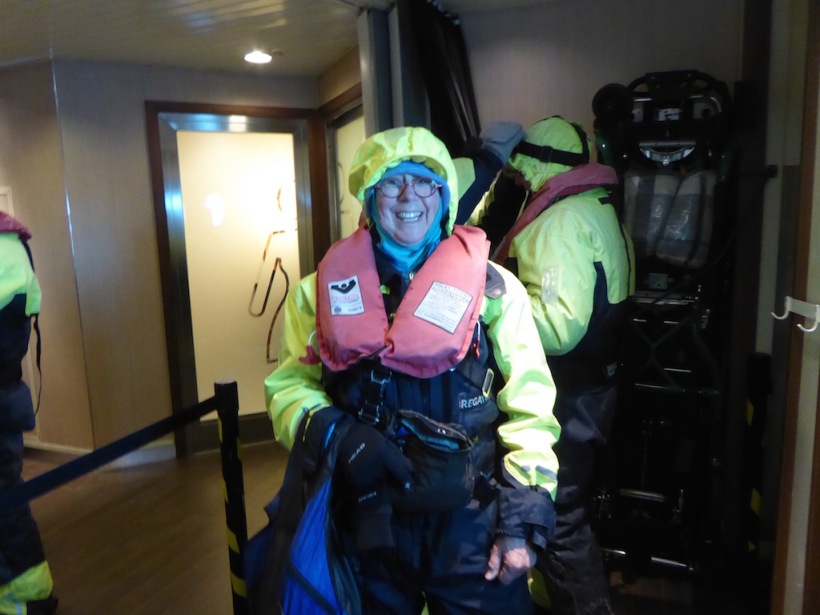 I loved getting up so close to the icebergs and blue ice.  It is so blue because the dense ice of the glacier absorbs every other color of the spectrum except blue – so blue is what we see!

The icebergs that our PolarCirkel took us near were so huge.  Perhaps you can get an idea of the size by seeing the ship behind it.

We had to navigate in the PolarCirkel boats through a lot of ice today. 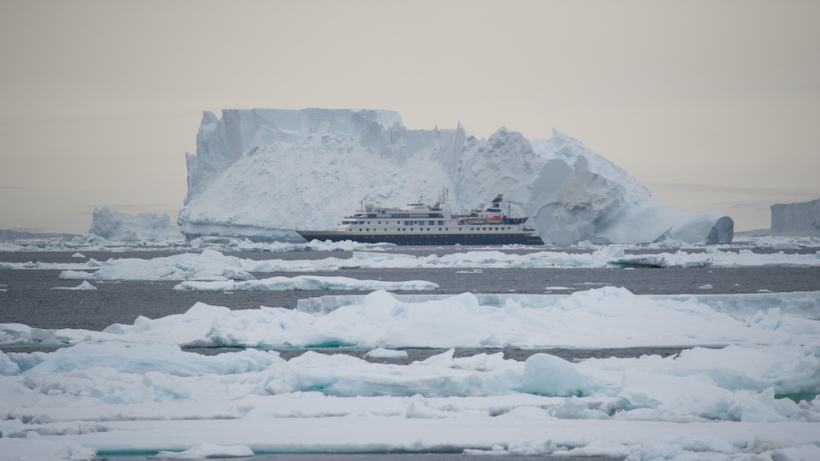 At 22:00 the staff served fish soup in the Panoramic Lounge, but I was ready to sleep so I missed this.

We woke up to a beautiful morning.  Nice day to go out on the front deck. 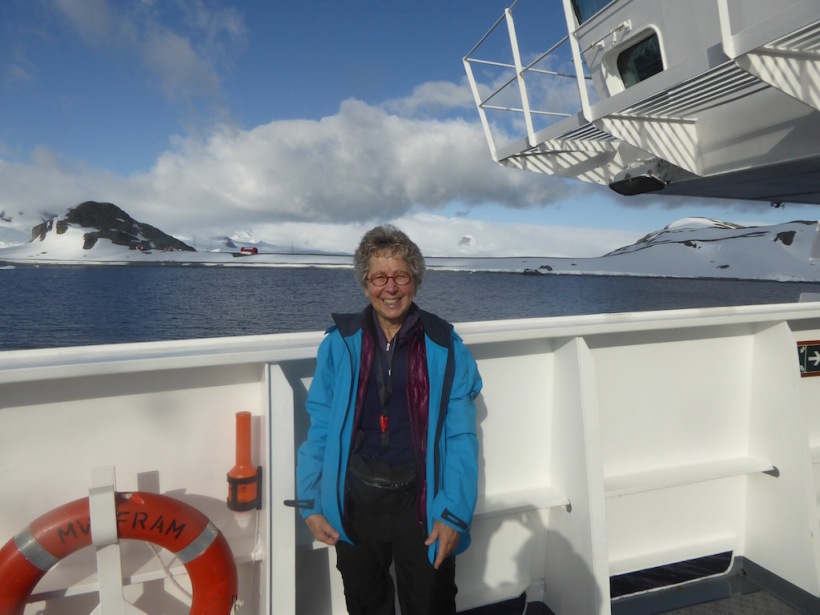 Ann, Pat, Jane, Doreen, Rita, Valerie and I were all lucky enough to be chosen for the snowshoe trip today on Half Moon Island.  It is a crescent-shaped island in the shadows of picturesque mountains and glaciers of nearby Livingston Island.  The weather was so fabulous despite the winds which were blowing.

We were very excited about this adventure.

Rita and Valerie were ready to go.

We snowshoed up (probably about 800 feet) to the top of a hill.  Of course I took a slight spill. 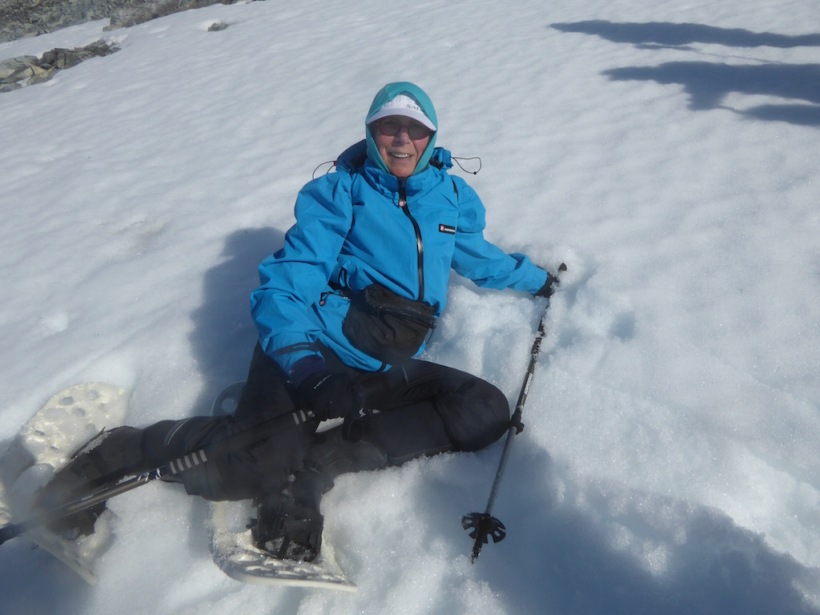 It was an unbelievably incredible place to be snowshoeing.

Fred took a couple photos of our snowshoe group from the ship.

We were able to get  up pretty close to Teniente Camara station which had huge Argentine flags that I could not see.

We were not allowed to go all the way up to it. Somehow both Chile and Argentina argue that part of Antarctica belongs to them.   It has only been sparsely staffed in recent years due to the Argentine economy.  I seem to remember being told that Antarctica only really belongs to Antarctica.

There is something ideal about when you put your flag up in Antarctica to you mark your spot.  Anyway, Marlena took our her flag of Greenland and Tomasz helped her to hold it up.

We were given certificates for snowshoeing.  I thought I would frame mine, but posting it in the blog seemed like a better idea. 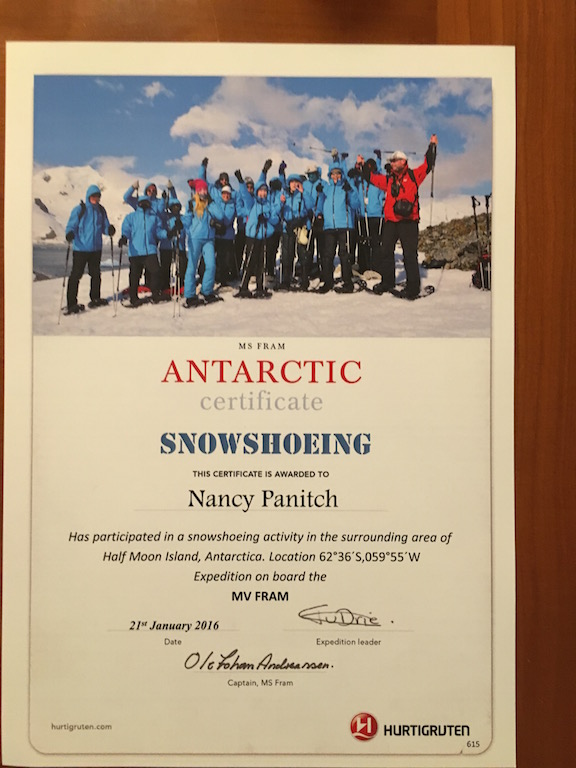 After we finished snowshoeing, we were taken by PolarCirkel Boats over to another spot on the island to watch Chinstrap Penguins.  When we boarded the boats from land, we stepped in the water.  It was so nice to have the boots they lent to us. 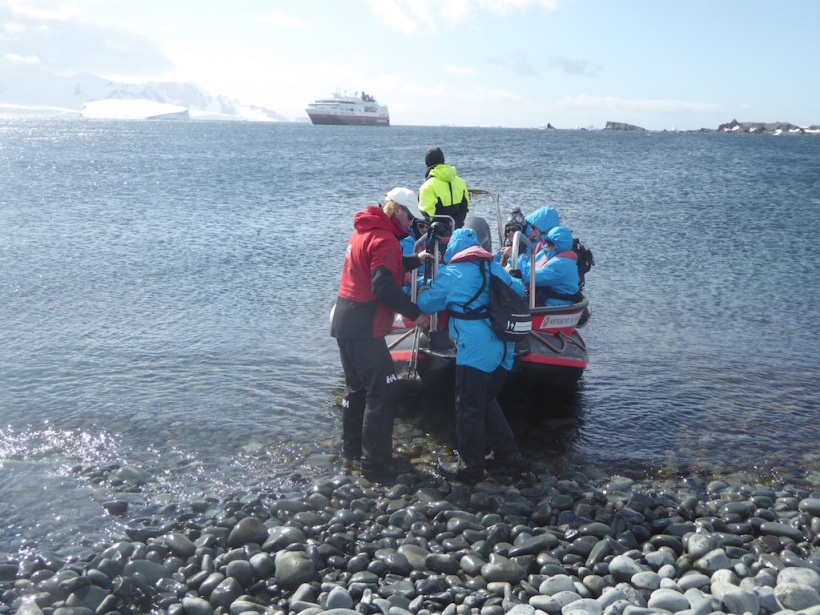 The staff said that this will be our only opportunity to see Chinstrap Penguins in significant numbers.  I am putting in this short video so you can see them and hear the wind.

The Chinstrap penguins name comes from the narrow black band under their heads.

I walked over the rocks to the end of where we were allowed to go. As we made our way to the top of the hill, the guides pointed out a Weddell Seal.  I actually got a photo of one with a Chinstrap. 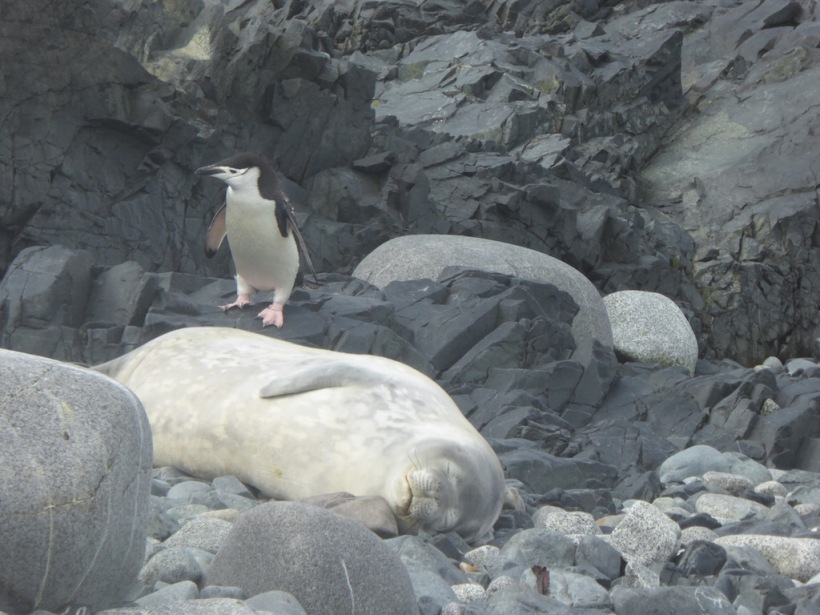 Morten, of course got some great photos of the Weddell Seals. 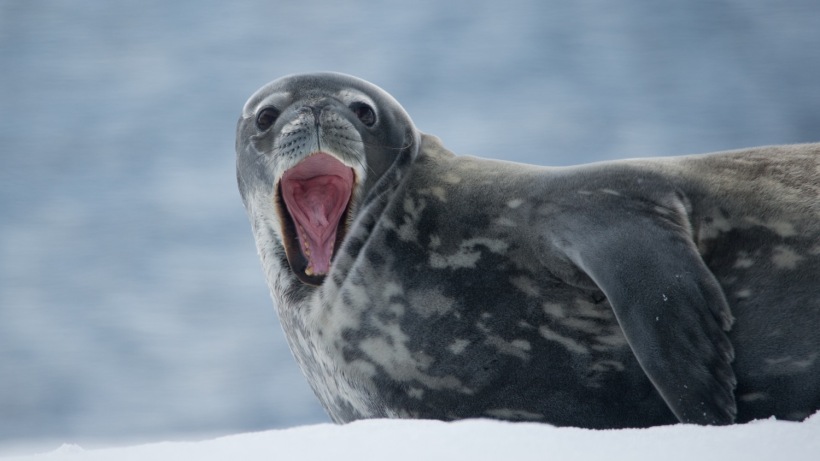 In another place we also saw a young Sea Elephant just laying there resting, but I don’t have a photo.

There was a real treat waiting for those of us who chose to walk up to the rookery. There was one Macaroni Penguin in the midst of what looked like hundreds of Chinstrap Penguins.  You will be able to tell Macaroni Penguins from other species due to the colors of the feathers on top of their heads. They are yellow and black and very dark in color. 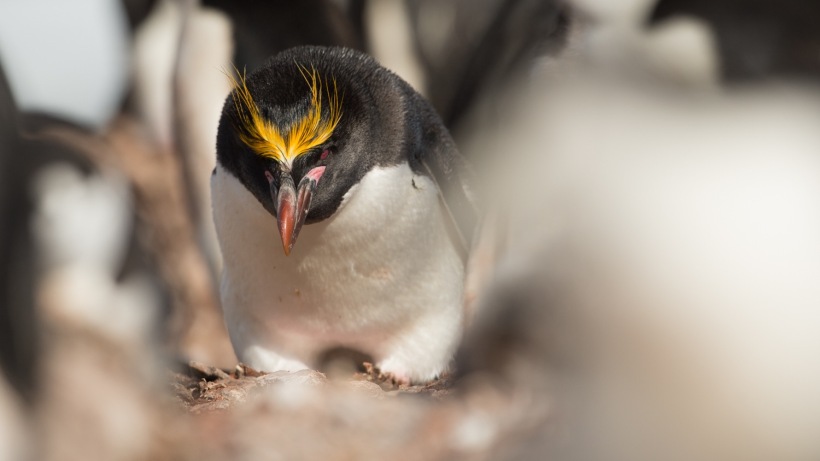 We were told that because the various penguins nests may be close to each other, this Macaroni Penguin may have  hatched in a Chinstrap area.  Because his visual imprint was Chinstrap, he just stayed there.  The staff said that he tried to mate once but it didn’t work out.

I was so excited when I saw that many baby chicks still in the nest. The fluffy brownish fur balls hang close to the adults.

They climb over the rocks with such ease.

This Chinstrap came pretty close to Sondra.  She had to stay very still.

Jane Roosevelt took a great video of Chinstrap Penguins jumping across the rocks. 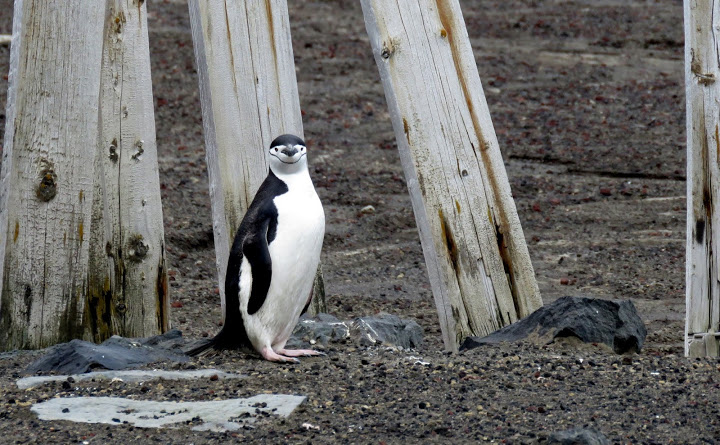 After lunch and rest time we were taken to Yankee Harbor. It is known as a natural haven created by a one kilometer curved spit and was named for the American sealers that frequented here in the 1820s.  Yankee Harbor indents the southwest side of Greenwich Island.

We walked all around watching the Gentoo Penguins.  They are characterized by a white patch around and behind the eye that joins on the crown. The orange-red lower mandible is also a distinct feature.

We saw several rookeries of Gentoo. This island is known to have up to 4000 pairs of Gentoo in the terraced Gentoo colonies. In contrast to Chinstrap and Adelie Penguins, some Gentoo Penguins can be found around their breeding colonies all year round and they forage much closer inshore than the other two species.
There were many adults sitting on the nests keeping the baby chicks warm.

A few other adults were sitting on eggs that had not hatched yet. 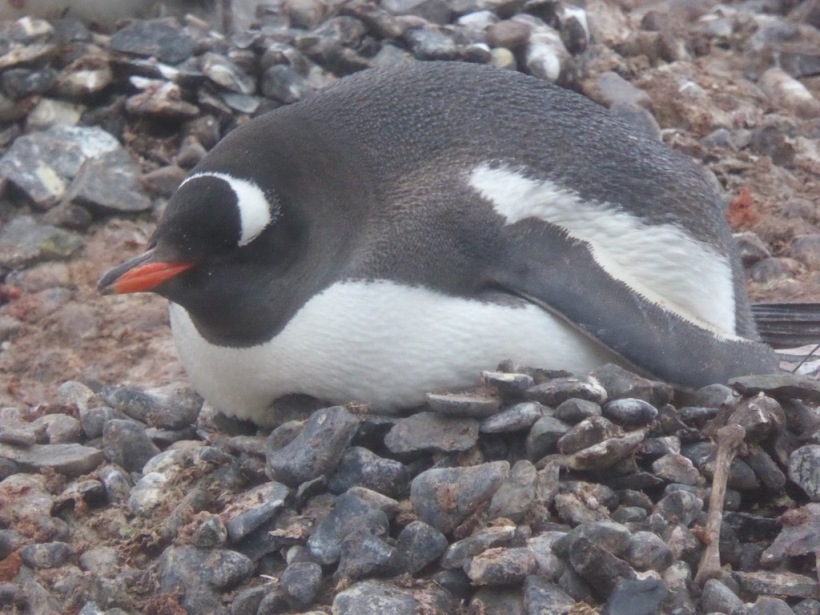 One of the penguin eggs had been abandoned.

This one is climbing over the rocks.

Many other Gentoo were by the water preening themselves.

A few were jumping into the water. They looked like they were having so much fun.  I wish I had a good video of that.

Skuas were constantly flying overhead looking for a chick.

Despite the cold and wind, this trip is a blast and, again, I could hardly believe how privileged I have been feeling each moment on this voyage.

The crew of this ship has been very impressive. Not only have they been there to help us with any need we have, they are also so organized. Due to weather conditions and ice blocking the entry to a place, they had to make changes on our itinerary and they have been right on top it. The lectures have been very interesting and their preparations meetings have been short and to the point.

Tonight at 22:00 some of the crew members sang old classical songs as our evening entertainment in the Panorama Lounge.