What an absolutely incredible day. We crossed over the 60th latitude at about 7:45 today which means we have reached Antarctica Waters.  The water is smooth today so we stopped rocking and rolling.

Ann, who has a much better memory than I,  gave me some facts about Antarctica and the Drake Passage  that she remembered from our lectures.

This morning we were told that we  had to attend a mandatory meeting (mandated by the Association of Antarctica Tour Operators (IAATO), Antarctic Treaty regulations, and Norwegian law.  Anybody who wanted to do any landings in Antarctica had to attend.  Of course we attended.  One thing we learned is that the penguins, of course, have the “Right of Way”  and we must stay at least 5 meters away from them.  We also needed to watch out for the “Penguin Highways” and not walk in them.

At about noon they made an announcement that whales had been sighted.   It was on of the largest pods they had ever seen. Spouts were going up all around us. The water was filled with Humpback and Fin Whales. There were hundreds of Petrels flying all around them. There must have been about 80 – 100 Fin Wales and 10-15 that were either Humpback or Minke Whales.They are all species of Baleen Whales.

The staff  told us some facts about the temperature of the Antarctic water (about 2° Celsius), the salt content of the water, the necessary conditions for growing algae, and where krill and other crustaceans live. I wish I could repeat all of the facts.

The captain put the ship in neutral and we just floated in the same spot for well over an hour trying to get photographs but mostly just being joyous. Not only were all the passengers amazed but the crew was also. They told us that they hadn’t seen this in over 10 years. They postponed our meeting times so we all had time on the deck. 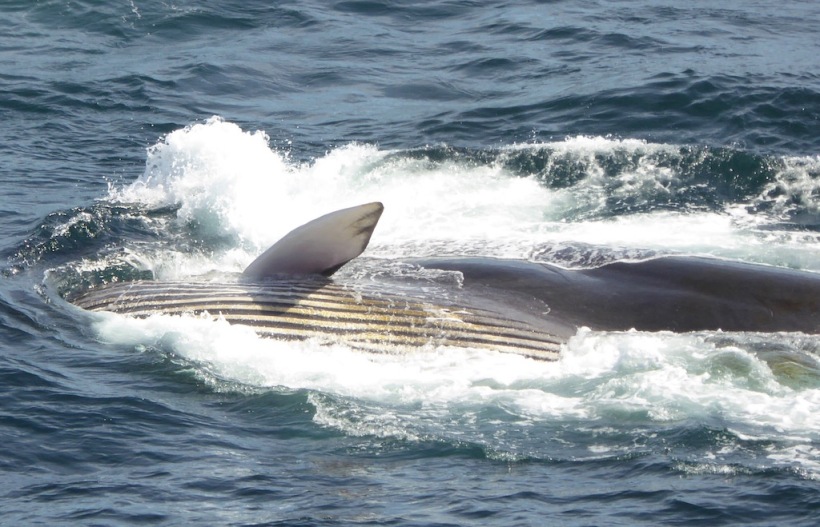 And another … I think there may be 3 whales in this photo.

Now for a couple of Morten’s photos. We can actually see the baleen of this whale. 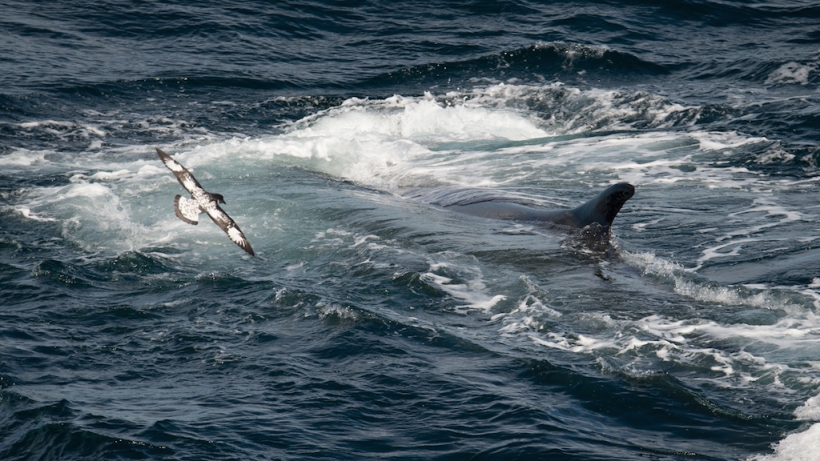 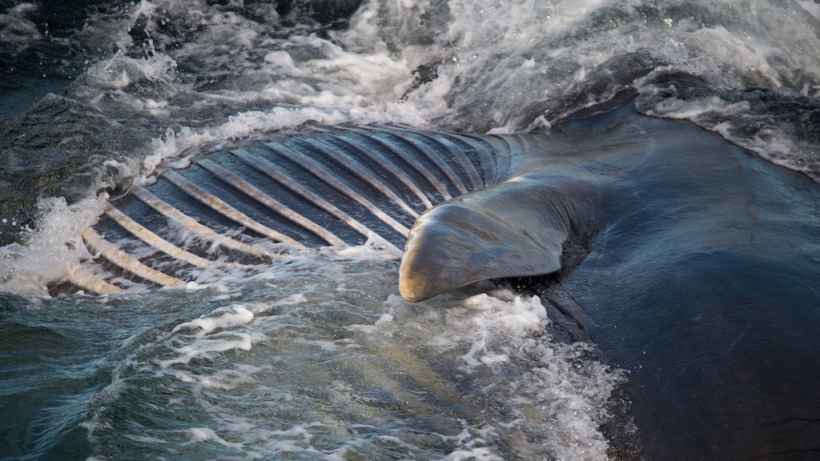 Not only were the whales astounding, so were the Petrels all around them. 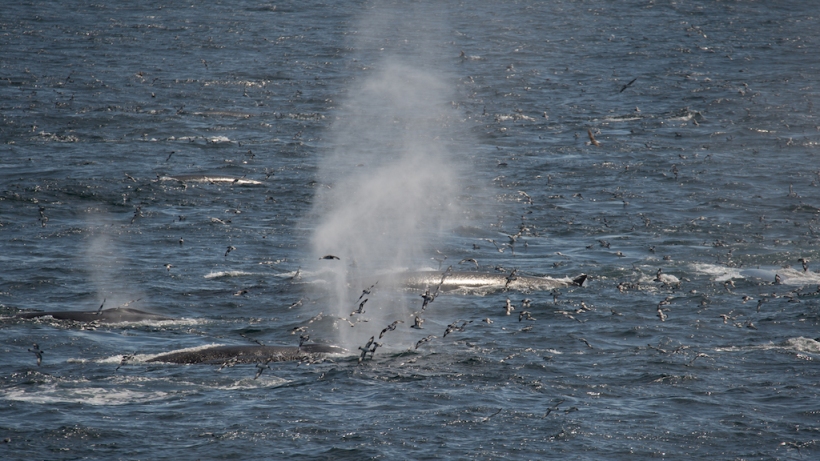 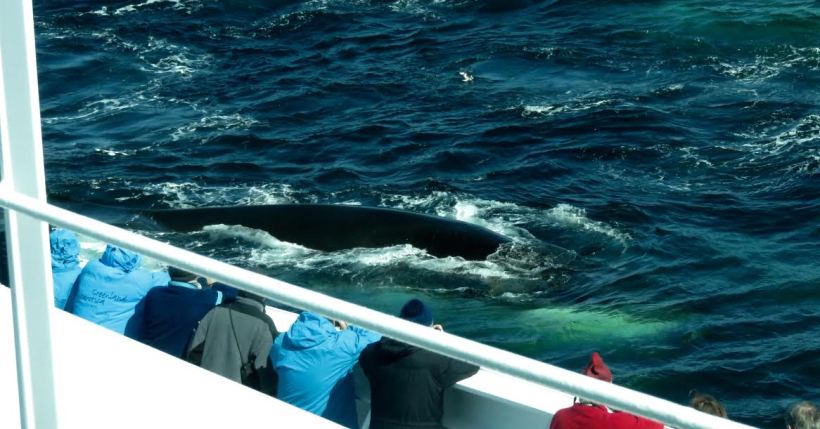 Morten took close-ups of many of the birds we saw.  This one is a Southern Fulmar.  (Thanks again to Sue Deitderrich for identifying all of the birds for me.) 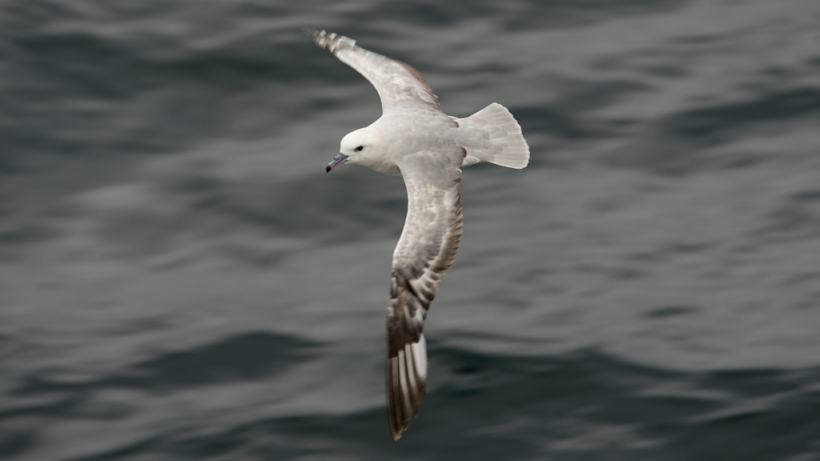 Here is a Black-Browned Albatros. 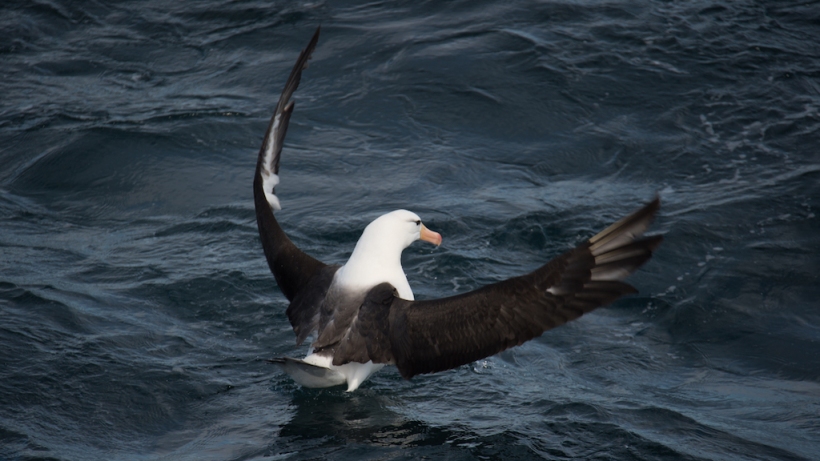 … and a Juvenile Black-Browned Petrel 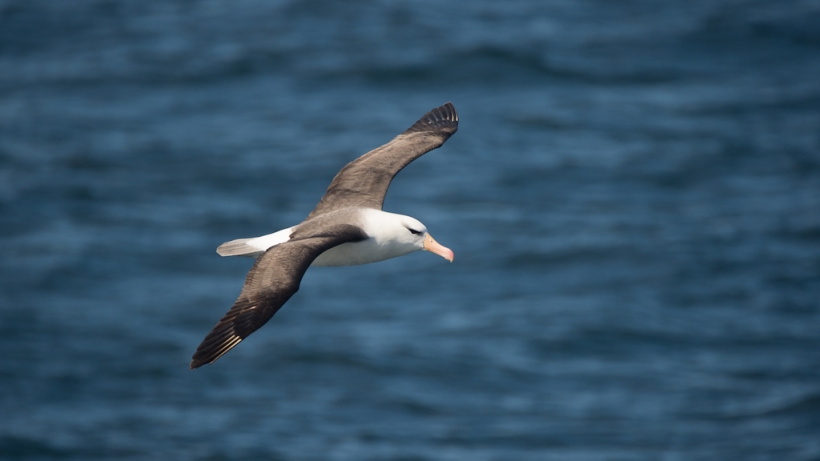 … and a Pintado Petrel 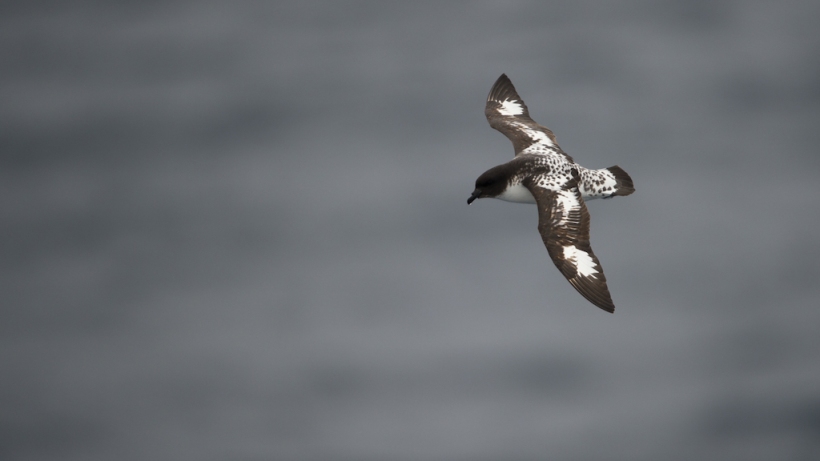 …and a  Southern Giant Petrel. 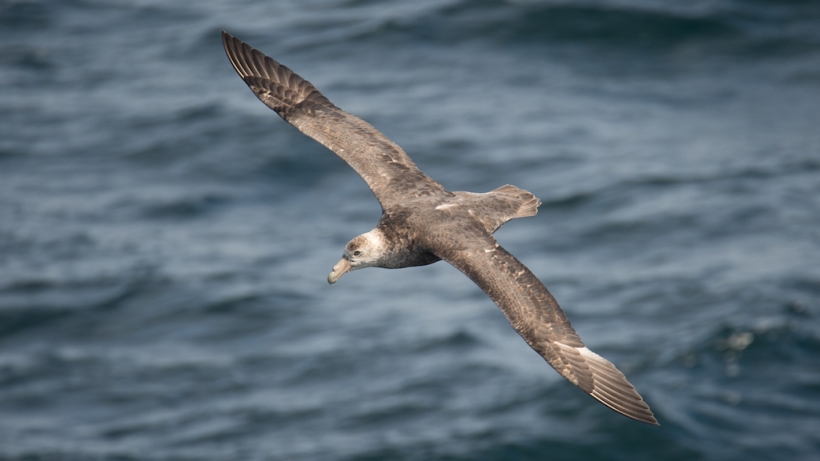 We reached Elephant Island which is a name steeped in legend.  Elephant Island is an icon for “Antarctics” the way Cape Horn is for mariners. This imposing and desolate island was home to 22 marooned members of Sir Ernest Shackleton’s fabled 1914 Imperial Trans-Antarctic Expedition for four and a half months while they awaited rescue. 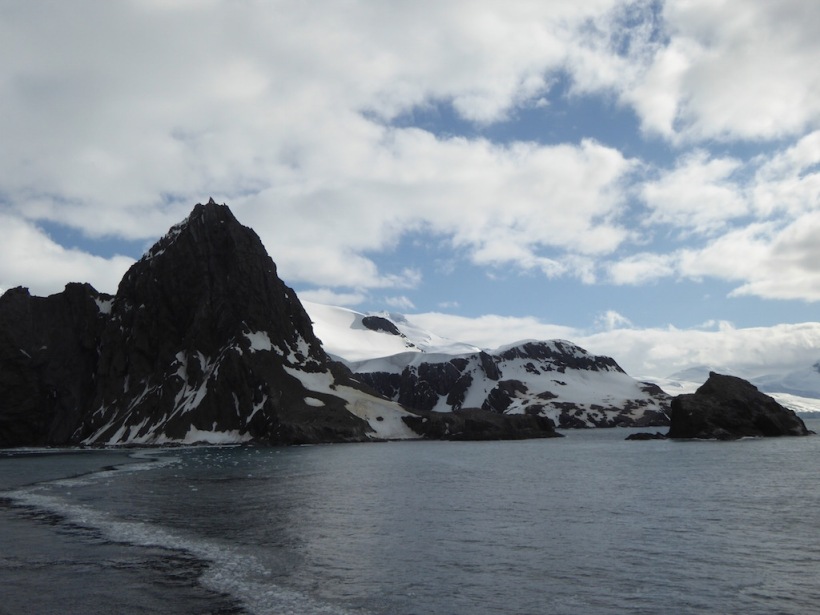 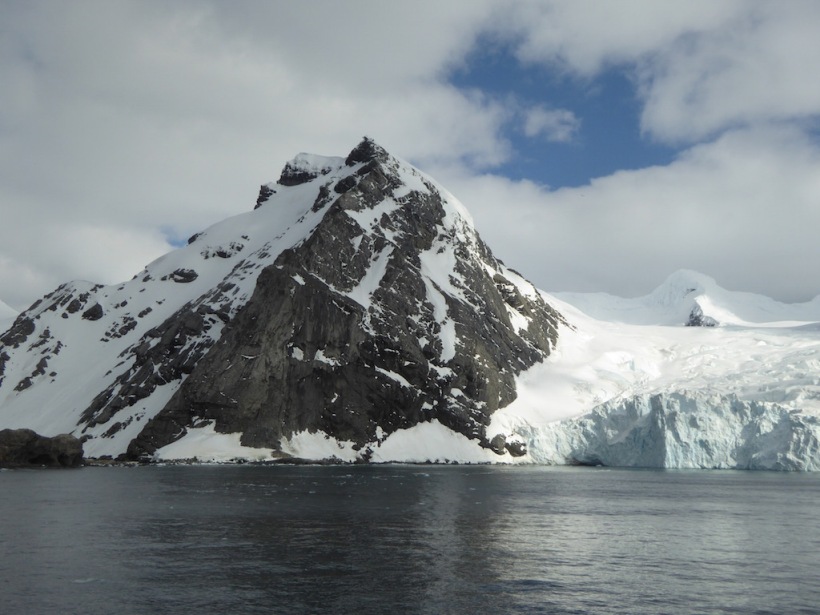 During the ill-fated Imperial Trans-Anarctic Expedition, Sir Ernest Shackleton’s ship (Endurance) became trapped in the ice of the Weddell Sea in January 1915. Nine months later the Endurance was crushed by the ice and sank on 27 October 1915. Led by one of Antarctica’s greatest unsung heroes John Robert Francis (known as Frank) Wild, the men barely survived living in horrible conditions beneath two overturned lifeboats. Named for Frank, Point Wild was originally known as Cape Wild and “Cape Bloody Wild” by the men stranded there.

Shackleton and his crew of 27 made their way by foot, sledge, and lifeboats to Elephant Island in the South Shetland Islands at the northern tip of the Antarctic Peninsula facing South America. On 24 April 1915 Shackleton and five of his men began an epic 800-mile open-boat voyage to the Island of South Georgia, leaving the remaining 22 men behind on Elephant Island while he sought help to rescue them.

After three frustrated attempts to rescue the Elephant Island group, Shackleton persuaded the Chilean Government to provide the Yelcho (a 36.5 meter steam tug) under Captain Pardo. With Shackleton aboard, the Yelcho sailed on 25 August from Punto Arenas, on the Strait of Magellan. By now the Antarctic winter was at its height, and ice conditions were difficult as the Yelcho was nearing Elephant Island. Luis Pardo Villalón (born Santiago, Chile) was the captain of the Chilean steam tug Yelcho which rescued the 22 stranded crewmen of Sir Ernest Shackleton’s ship Endurance from Elephant Island 30 August 1916. In Chile he is frequently referred to by his rank, “Piloto Pardo.” When the Yelcho returned to Punta Arenas on 3 September 1916 to an enthusiastic reception from the population of the city as well as Chilean Naval authorities.

Point Wild is known to be the home to a small colony of hardy chinstrap penguins and a single bronze bust incongruously watching over them. Can you see the fur seal in the forefront of the photo? The bust is of Captain Luis Pardo master of the Chilean Navy ship Yelcho that eventually rescued Shackleton’s men. 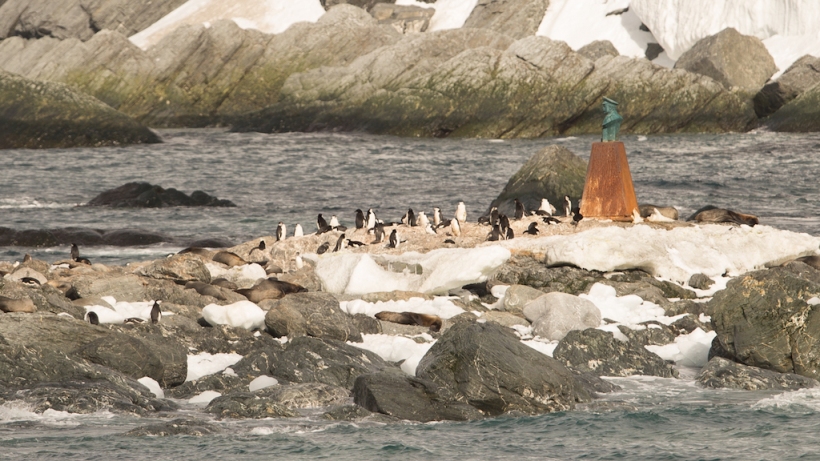 We are so lucky to be here seeing these fantastic sights. 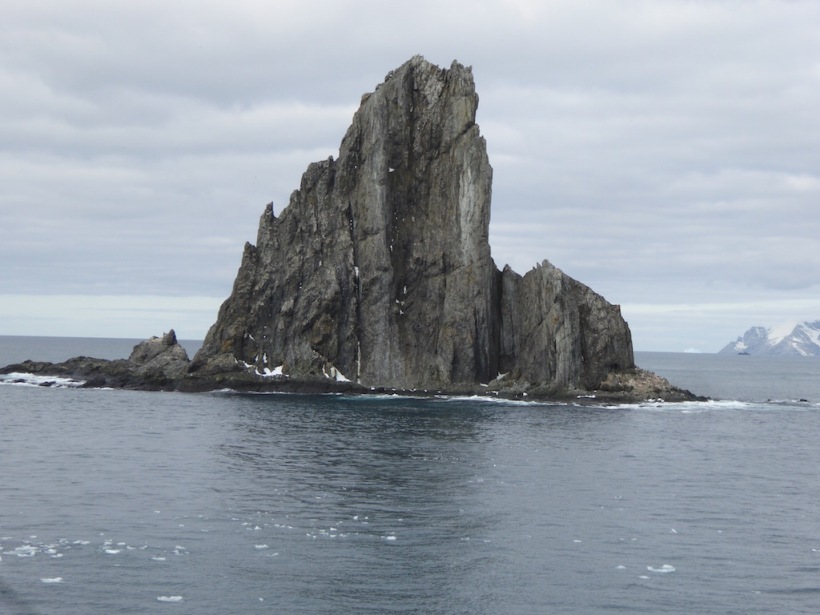 Today we also had to attend a kayaking meeting where they showed us how we were going to suit up for the trip. Some of the clothing will include a full-length fleece-like, a dry suit with neoprene feet, and neoprene gloves.

Then we went to get the boots that we will use for our other landings. Yesterday we were given the blue waterproof jackets that we get to keep. When we are all together in our blue jackets, they call us “Smurfs.”

Okay, I succumbed to a purchasing a t-shirt. It says “I survived Drake Passage”and I plan to wear it a lot when I get home.  Even though the passage was not so bad, we don’t know what to expect on the way home.

By now we were seeing many icebergs, penguins (Aldelie and Gentoo) and Fur Seals. I have spent much time today sitting in the Observation Lounge on the 7th deck.   I have been again stunned on how privileged we all are to be here.

Below are some photos  (Morten’s, Heidi’s and mine) of the icebergs and floating ice we were passing. 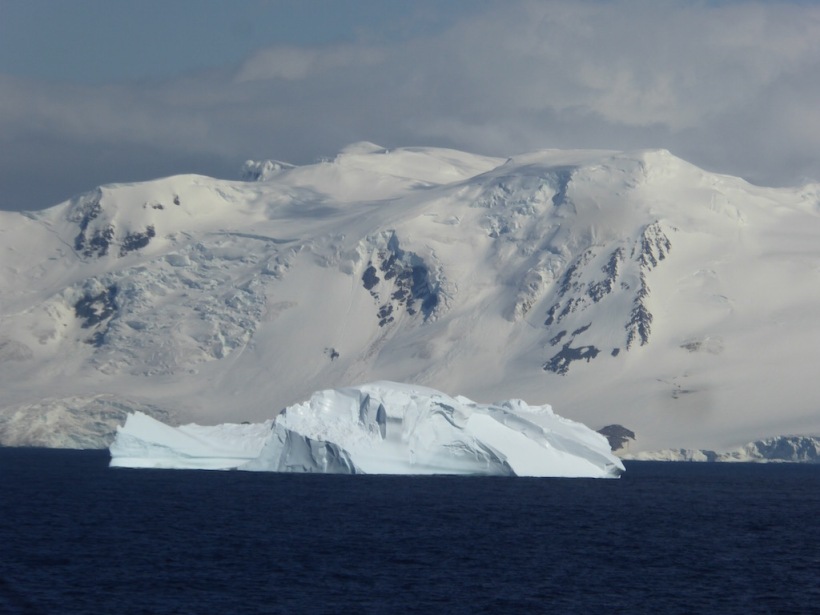 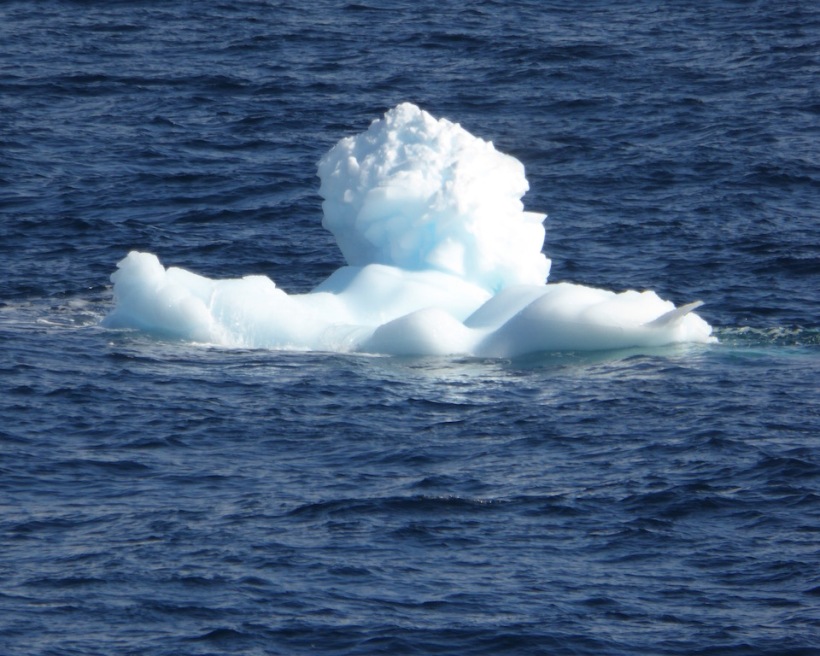 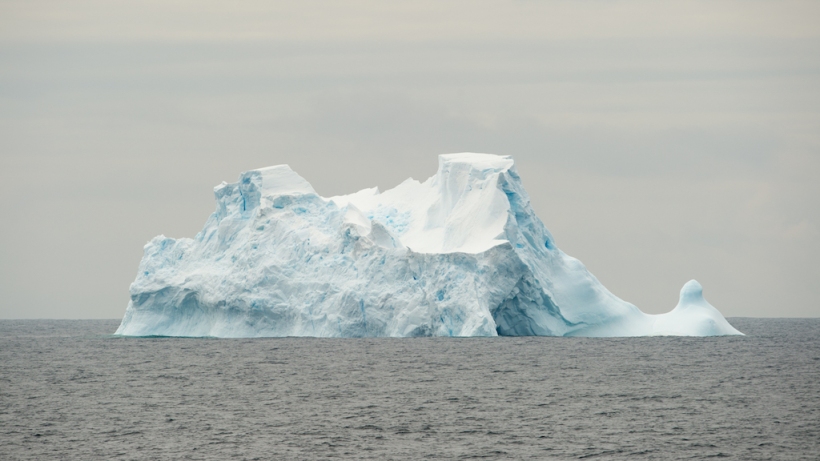 Heidi took this wonderful photo of an iceberg. 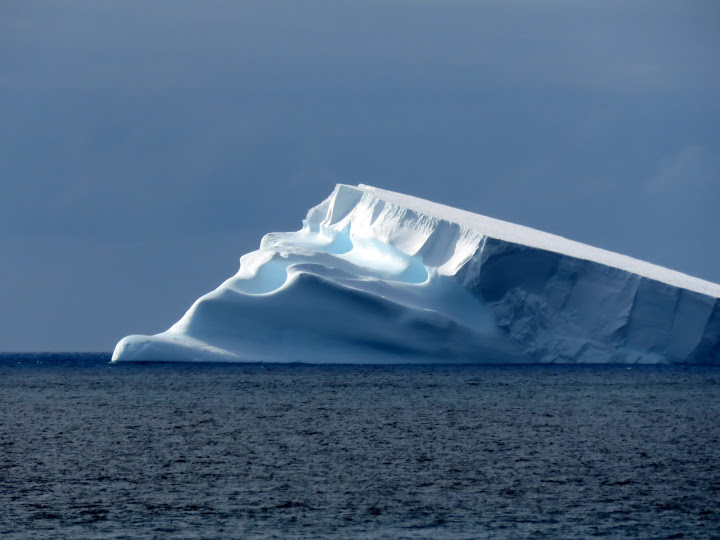 Part of the above iceberg looks flat like a tabular iceberg.    An iceberg with cliff-like sides and a flat top; usually arises by detachment from an ice shelf is known as table iceberg; tabular berg. The one below is definitely a tabular.

Another thing we had to do today was to vacuum out any backpacks and anything we had brought from home which we planned to bring with us when we went onshore. 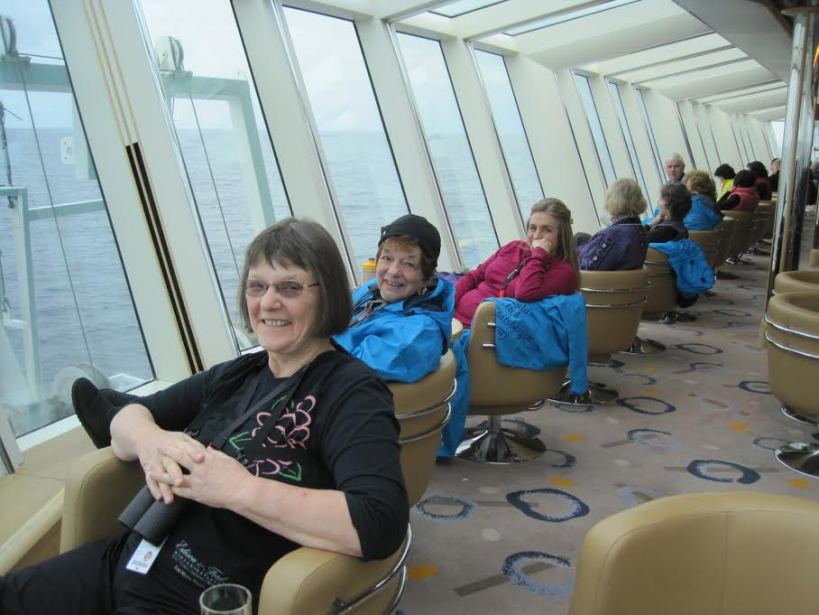 Our whole group has been assigned to the second seating for meals so we will be eating lunch at 13:30 and dinner at 20:15 each day.

At 22:00 the staff did a fashion show for us in the Panorama Lounge of the clothes they sell in the shop on the ship.

11 thoughts on “Going by Elephant Island”