Congratulations to my wonderful granddaughter, Maya, on her 8th grade graduation.

We awoke to another beautiful morning.  How lucky.

Saw a “Bird on a Wire” and blue, blue skies this morning as we began our walk. 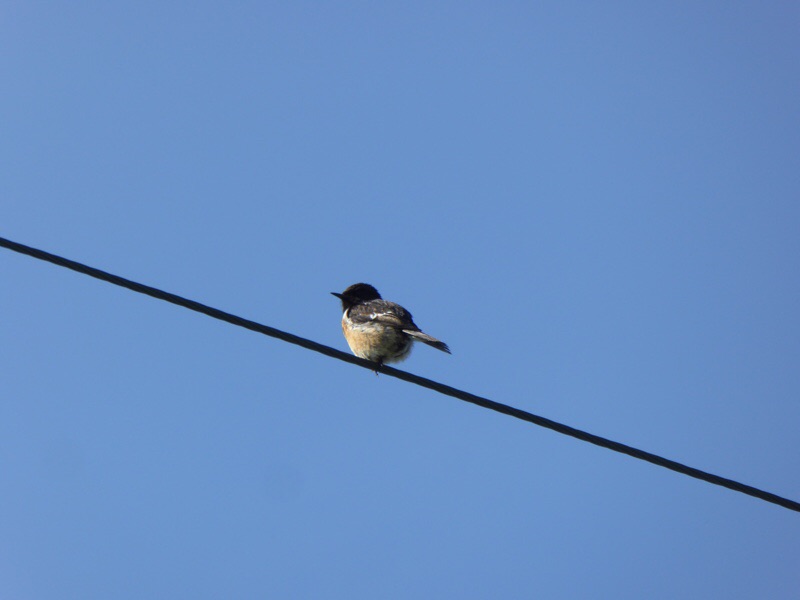 First we walked on the road  along the Liscannor Bay as we left the town.

We came to a tower that had been built during the Napoleonic times by the Brittish government. 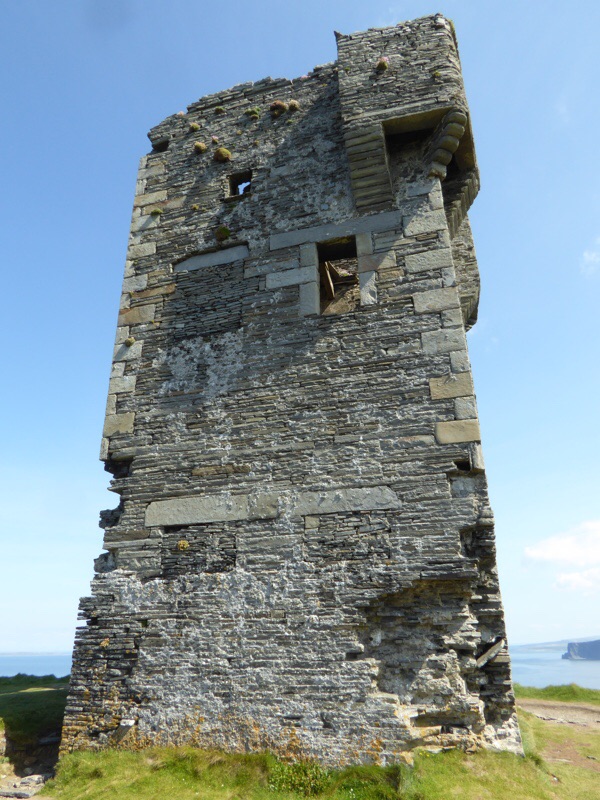 It stands on the same spot where a prehistoric fort, named after an Irish chieftain, called Moher, used to rise above the cliffs.  This Moher fort gave its name to the cliff.

Apparently, this spot is the most southerly point if the Cliffs of Moher.  The name is said to come from the unusual rock formations in the cliff that supposedly resemble an old woman’s head looking out to see.  The call it  Hag’s Head – what an awful name.  Anyway, I never saw it, but here is a photo of it off the web.

Of of course, I added a stone to the cairn that was there.  Just a Camino moment.

We walked along a path enjoying the sites of the sea And the cliffs. 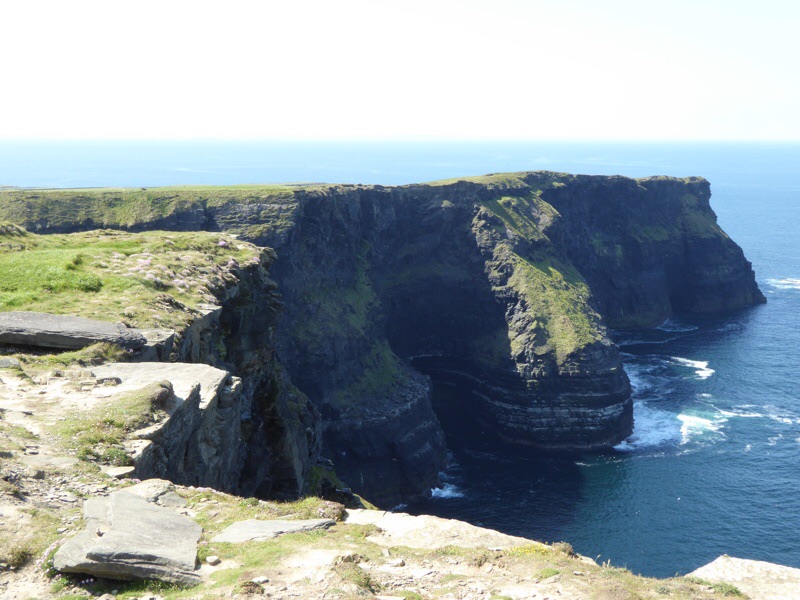 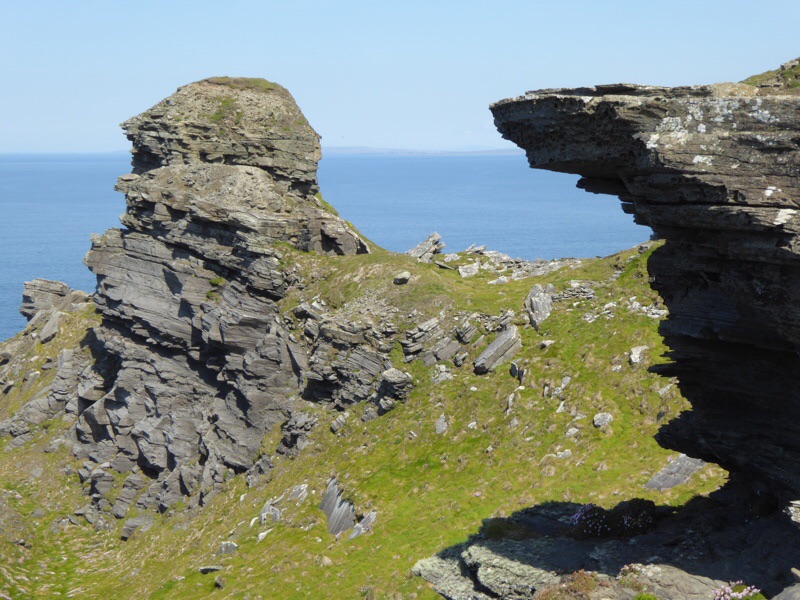 This was my favorite place to add a stone to a cairn because it was on the cliffs.

As we approached the visitor’s center there were so, so many people.  The Cliffs of Moher are Ireland’s most visited natural attraction with almost one million visitors every year.  They stands 214 m. (702 feet) tall at their highest point and stretch for 8 km along the coast of County Clare.  The cliffs consist mainly of beds of shale and sandstone, with the oldest rocks being 300 million years old and found at the bottom the cliffs.

We had lunch at the visitor’s center including ice-cream cones, of course.  It was Linnala Pure Irish ice-cream which was given its name by Bris & Roger Fahy.  The name means Swan Lake from a poem.  Their family has had a traditional dairy farm since the 1800s.  They started making ice-cream in 2006 using milk from their shorthorn cows which are native to the Burren.  Fresh cream, fruits, and nuts (as many as possible sourced in the Burren) are  used to produce the artesian ice-cream.

This tower is at the highest point  of the cliffs.  It is called O’Brien’s Tower.  Apparently it was built in 1835 by a local landowner and MP Sir Cornelius O’Brien with the intention of impressing female visitors.  Seriously!

There are an estimated 30,000 birds of more than 20 species living on the cliffs. Mary said she saw Puffins way down at the bottom of the cliffs.  The seagulls are abundant and rooster in the crevices of the cliffs. I wish I could have identified others.

It was great to get away from the crowds.  We were able to walk a section of the footpath that has not been officially completed to Doolin. That would allow us to avoid the road. We asked some local young men to make sure it would go all the way.

Here are a few photos from that part of our walk. I am below our path. 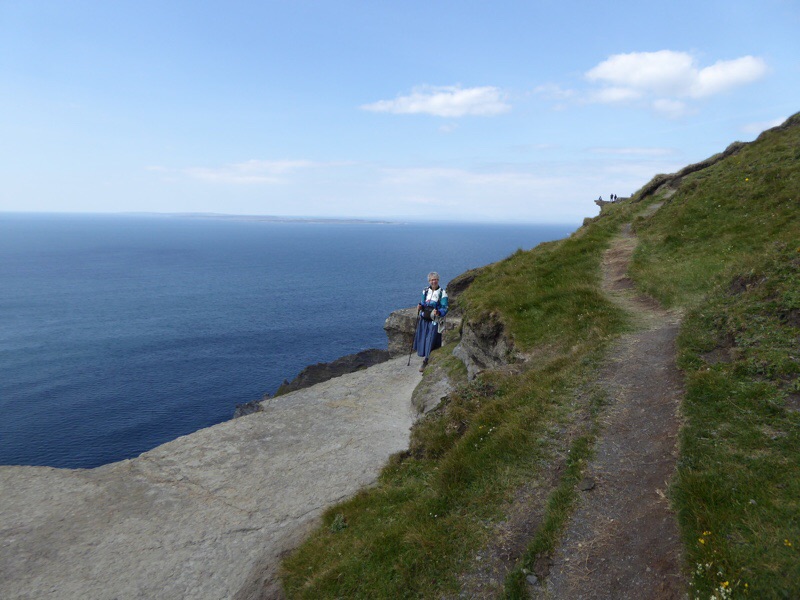 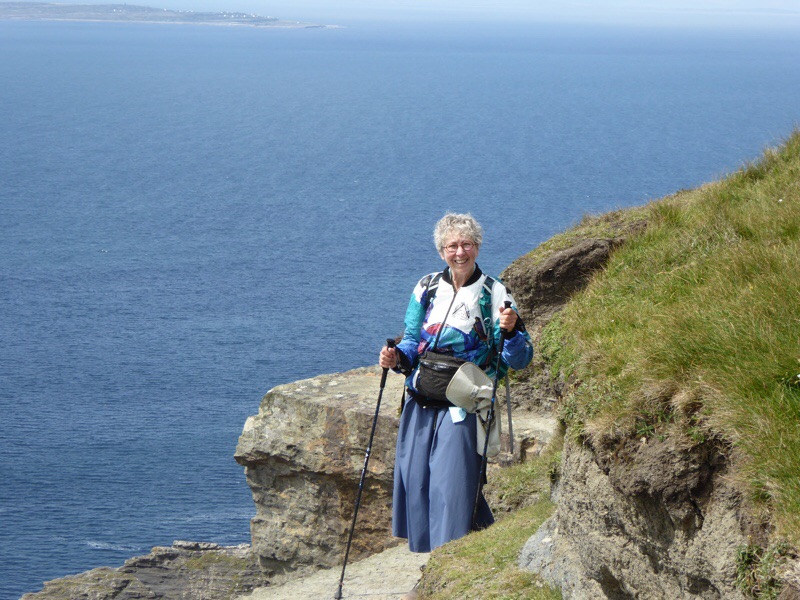 It was so inspiring to be here. 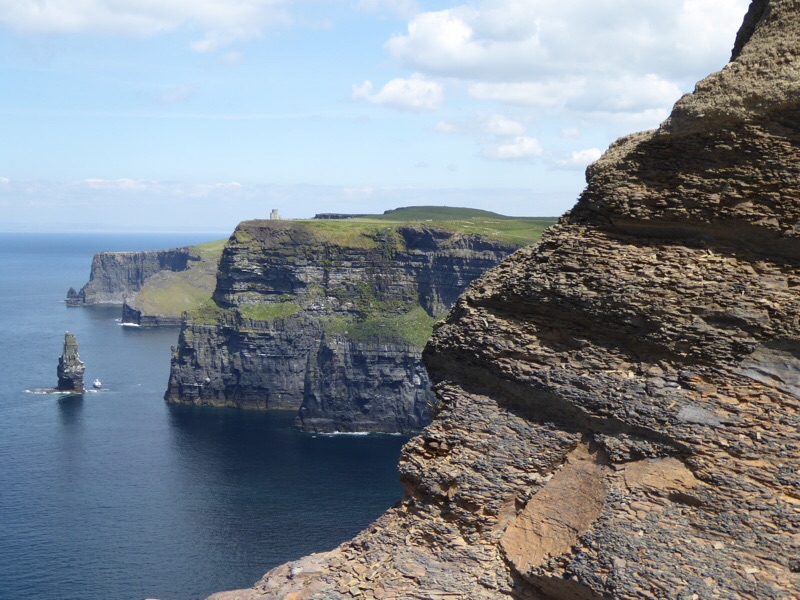 Here is a close-up of the rock you can see in the photo above.  I love this rock.

I look close to the edge, but I’m actually safe. 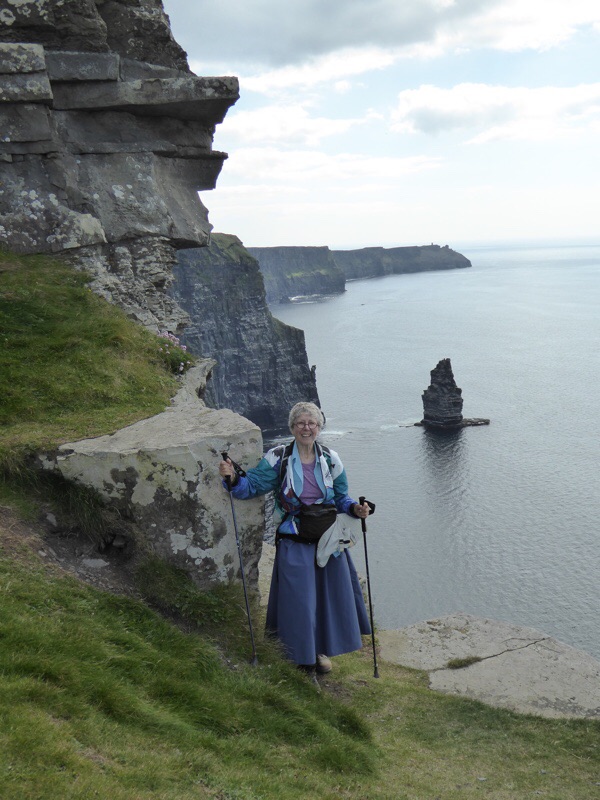 The pools of water below us were wonderful

At one point we passed this sign, and carefully continued on the trail. 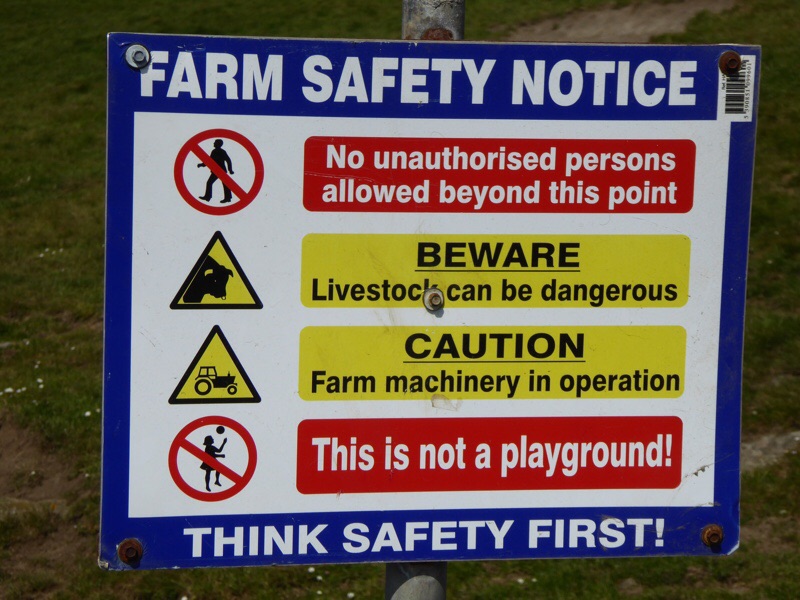 We were very cautious when it was narrow. 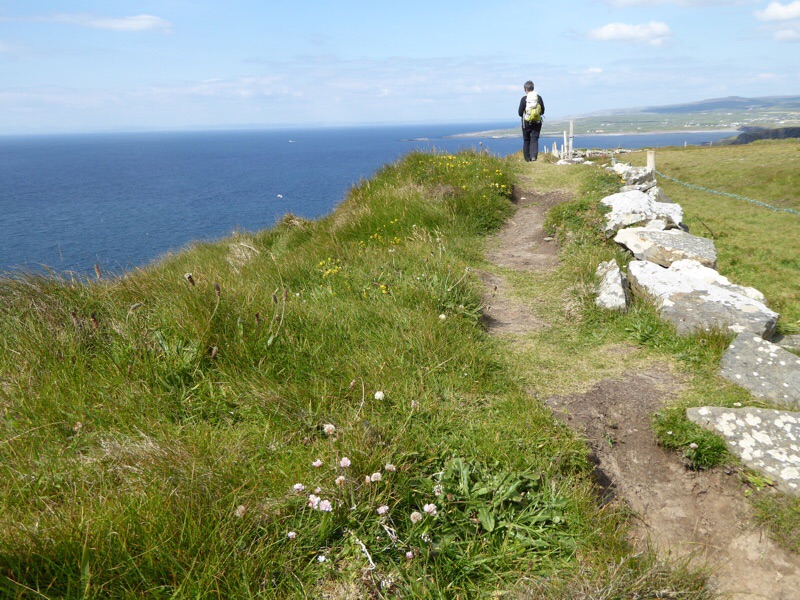 What a fantastic path. 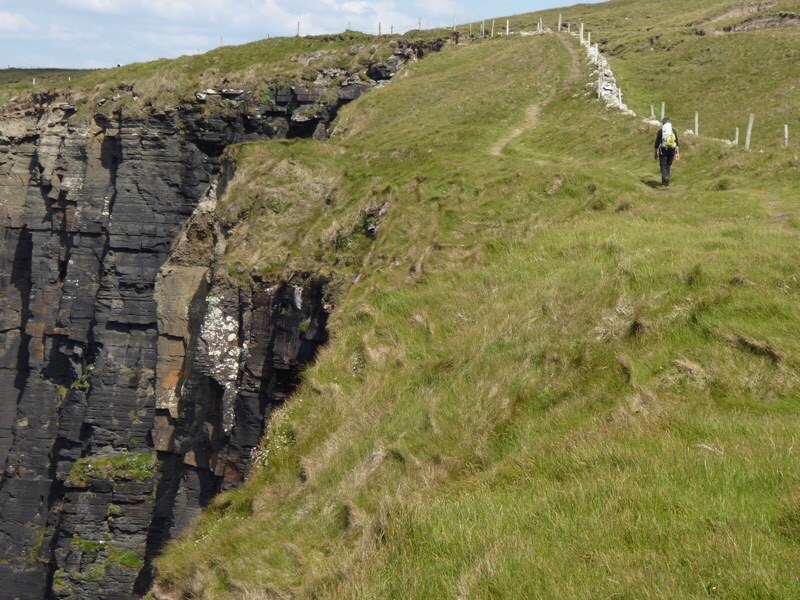 It was so exhilarating to walk by these cliffs.

Of course we were careful crossing fences.

Or when the edge seemed close.

Another view looking back at our trail. 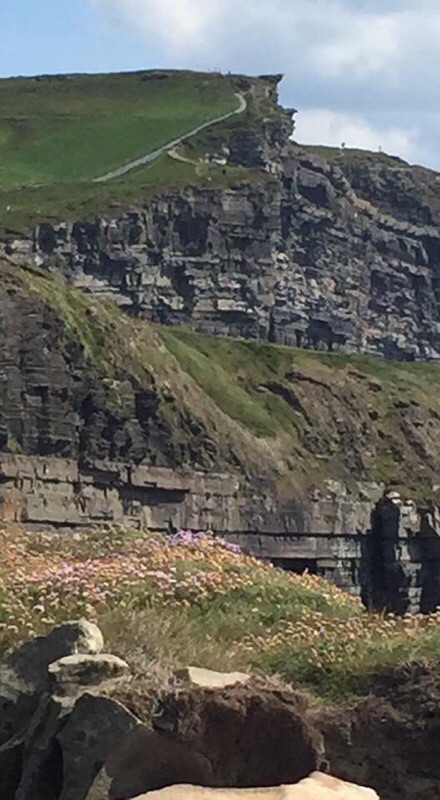 Everything was was so beautiful. 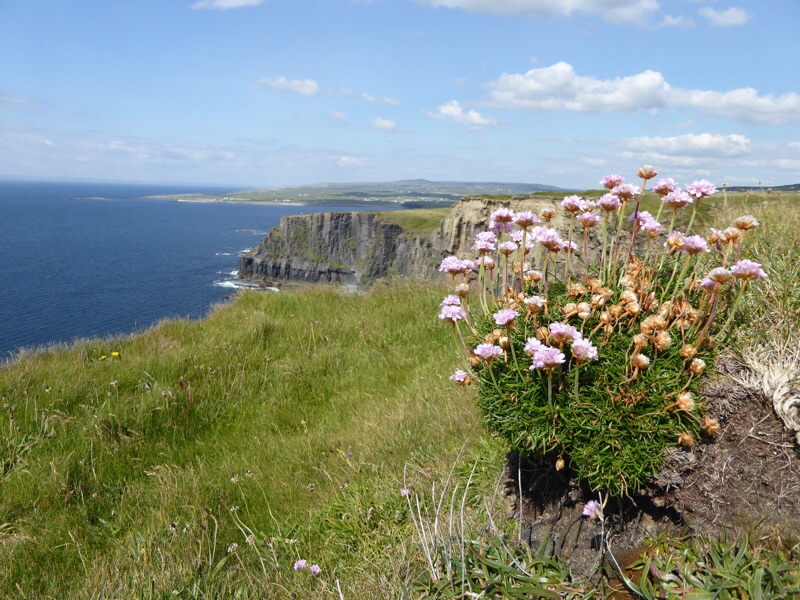 I loved the shimmering waiter.

Of course we made made it all the way past the edge of the cliffs. We then came down closer to the sea.  I was so excited when Mary told me she had seem a pod of dolphins playing out in the water.  As I walked along I kept watching and watching and then they were there again.  There were so many of them.  It was impossible to get a photo.  So I just had to enjoy watching them play and probably eat dinner.  I have never seen so many dolphins at the same time..

Eventually we came close to Doolin.  On our right we saw Doonagore Castle, a round 16th century ‘tower house,’ overlooking the lower part of the village of Doolin, called Fisherstreet.  It is one of three round castles in The Burren.

In 1558, during the retreat of the Spanish Armada from its failed attempt to invade England, 170 survivors of a Spanish shipwreck were caught by the High Sheriff of Clare, Boetius Clancy, and hanged at Doonagore Castle.  They are buried in a barrow near Doolin called Cnocán an Crochaire.

I have no idea where this cave in the cliff goes.  We were close to Doolin.

We arrived in Doolin and stopped the souvenir shop and and the “made in Doolin chocolate shop” before we went to Doll’s Cottage to relax.

By this time I had checked over my photos, it was 9:00 and Mary didn’t want to go out.  But I had to go hear music in Doolin.  So I went to O’Connors Pub for some food and music.  There were 3 musicians playing and then an old local named Ted started singing with them.  Sean O’Connor’s parents (Sean is the the owner of Doll’s B&B)  actually used to own O’Connors Pub.   He told me to make sure I got to hear Ted sing. 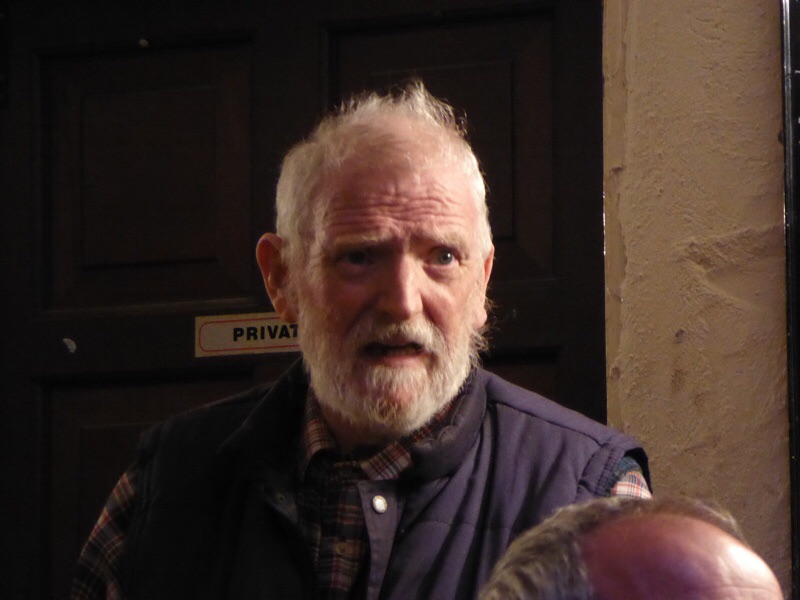 I  stayed until about 10:45 and then realized that I better get to sleep if I wanted to walk the next day.

Another thing that I have realized is my favorite length of walks on this trip is between 15 km and about 20 km, although 22 is not bad. That is with the rest of our height will be. I think Mary actually prefers the 22 km to 28 km walks but it is hard for me to keep up with her.

Another thing I have been thinking about a lot is the benefit of walking. The people who are on the tours have to go exactly where the tour guide wants them to go. The people who are in cars go by the scenery so fast.  Even the people who to bike rides through this country could not have done the hike we did today. You had to be walking. It is clearly the most intimate way to  see the landscape. Of course, when I get really tired, I have to remind myself how wonderful walking is.

9 thoughts on “Liscannor to Doolin through Cliffs of Moher”