Night before last they said the temperature was going to go down to 3 degrees Celcius.  When we awoke this morning it was raining.  So I dressed in all my rain gear and prepared my pack with the rain cover.

Tony picked us up at 9:30 along with the French couple we had met yesterday.  Then we picked up the 2 young German men we met a couple days ago.  He drove all of us to Aasleagh Falls.  The skies had cleared and the temperature was warm.  So before we began I took off all the rain gear and my down vest.

We had left County Gallway and entered County Mayo (meaning “Plain of the yew trees”).  Our information said that it would be a rugged landscape, 36% of which would consist of mountains, bog, or lakes.  Mayo experienced the greatest depopulation of any county in Ireland during and after the Great Famine: the 388,000 inhabitants in 1841 had been reduced to just over 100,000 by the 20th Century.  We were told that our walk will take us through the county’s lonely moorland landscapes.

We we started on a path by the falls and walked along the Erriff River.

The day was absolutely marvelous and the rivers we were passing were so calming. 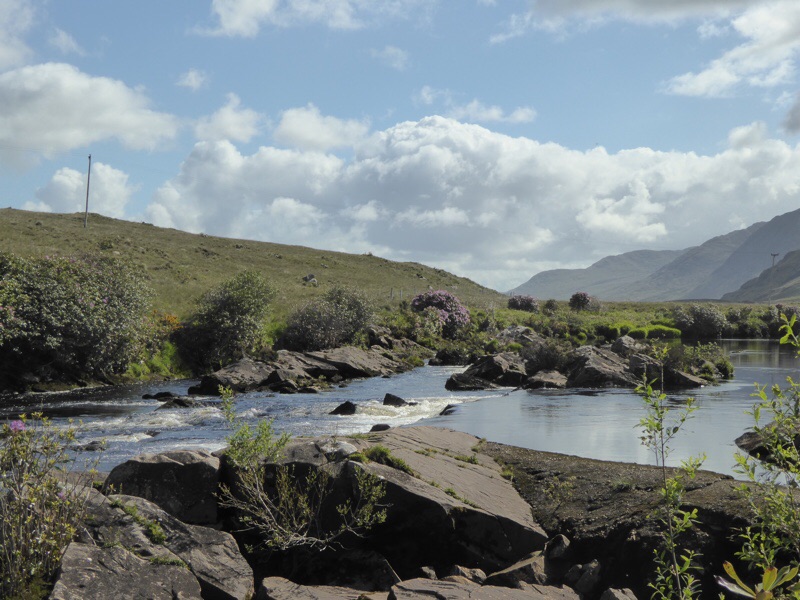 I loved seeing the reflection of the clouds in the river.

We were walking through the fields and enjoying the views of the mountains around us. 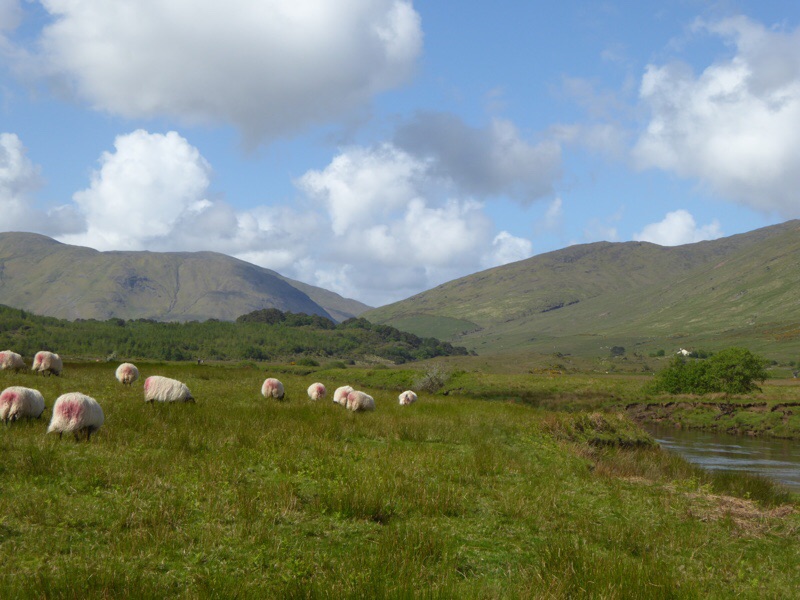 These gate crossings had a much easier design and were easy to climb over. 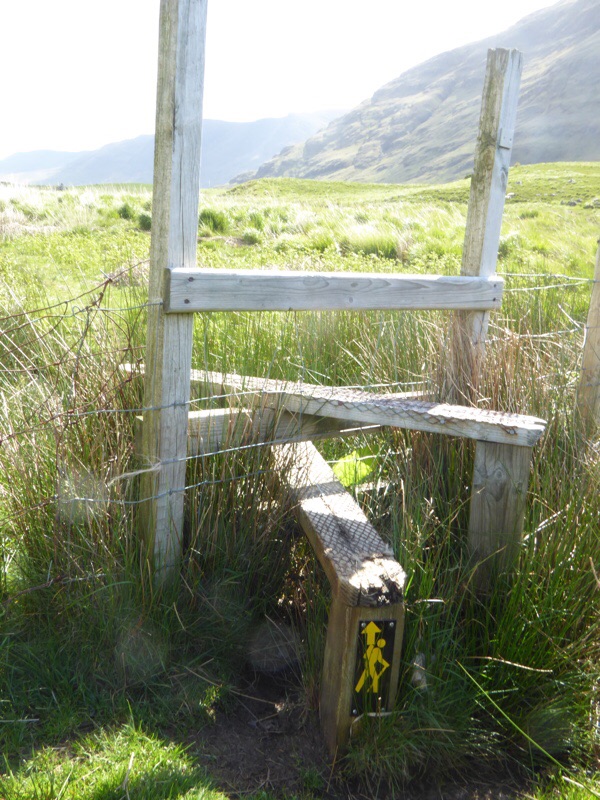 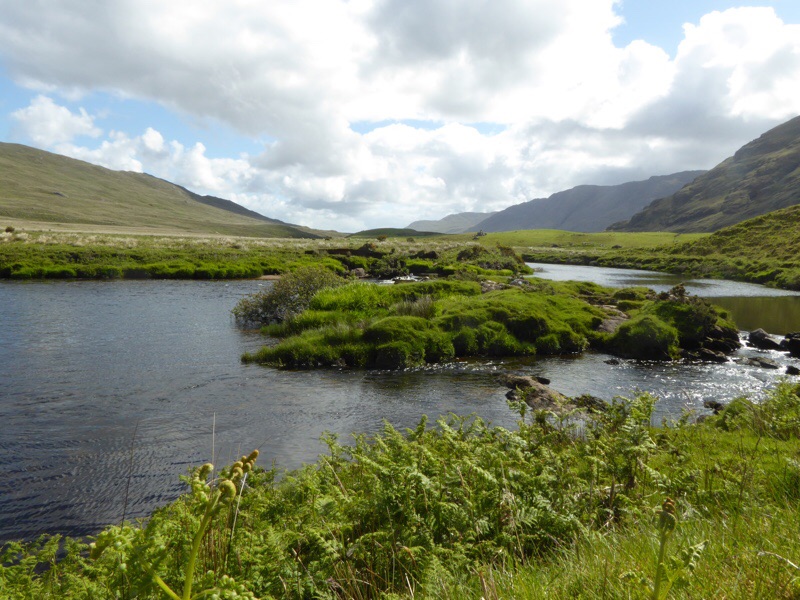 Nice setting for a farm home. 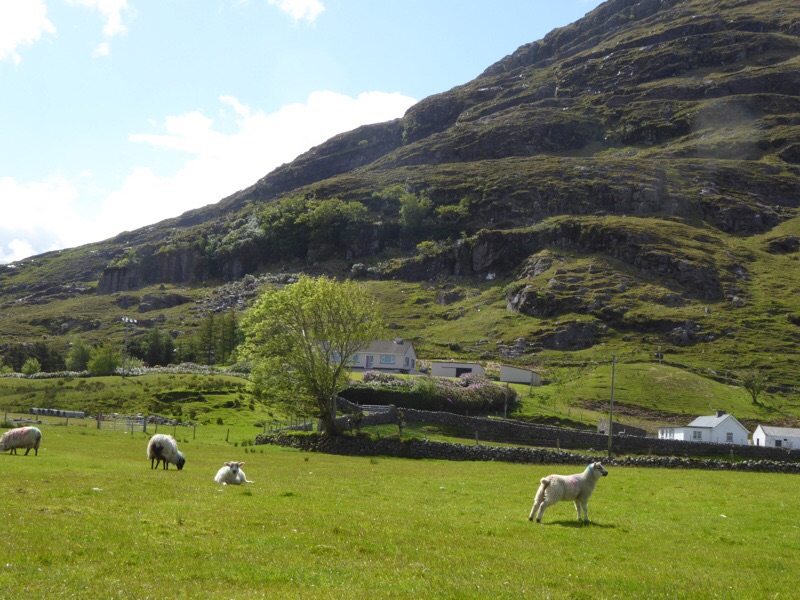 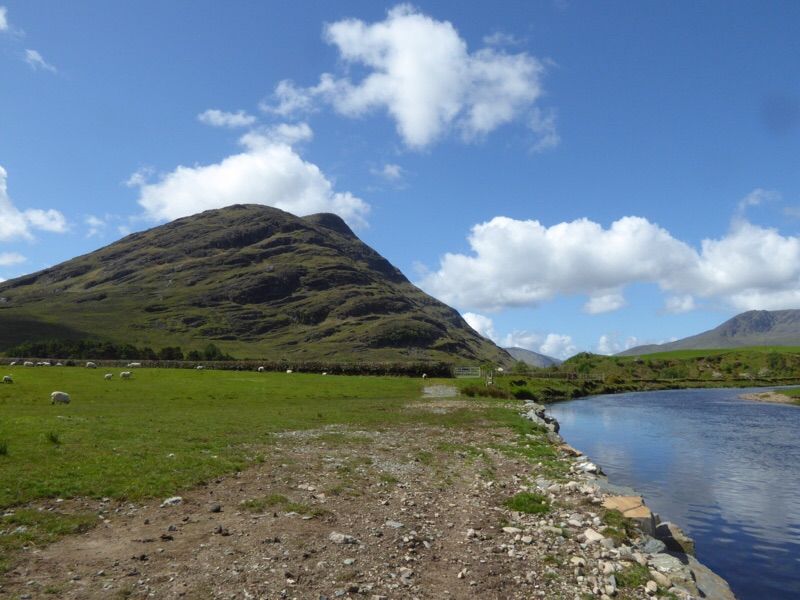 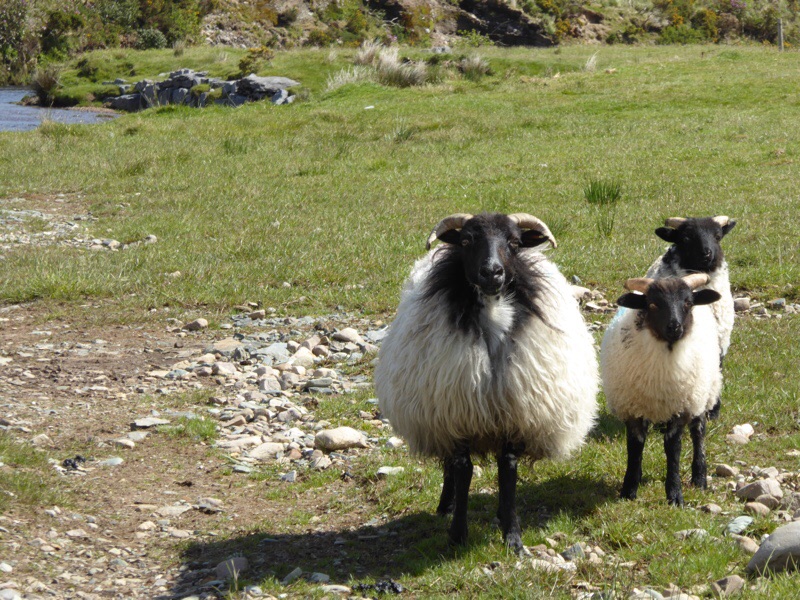 We we continued our  peaceful morning walk. Eventually we crossed over the Owenduff River and onto a track that led us into the Tawnyard Forest.  I don’t have photos from the forest, but here is some information.

Although most of Ireland was once covered with trees, Ireland’s forest cover was dramatically reduced over centuries by human activity. At the beginning of the 20th Century,  Forest comprised only about 4% of Ireland’s total land surface area.  This is the lowest level in Europe. Today is figure has risen to 10%, which is the second lowest in Europe.

The majority of Ireland’s forest are plantations of imported conifers planted in the 20th century.  Native Woodlands ( such is oak or ash) i’m making up only about 1% of the country’s land area. Most of the trees in the Irish plantations I’m Sitka spruce and Lodgepole pine which are both originally from North America.  They grow well in the wet and peaty soils of the Irish uplands.

We had walked about 10 km.  That’s right.  We still had our afternoon walk to complete.  Hard to believe that we had another 11 km to go.  It was quite an afternoon.

We had two options at this point and one was 4 km. shorter, but our option said, “Longer, more beautiful route,” so, of course that is what we chose.

First we walked along a road. 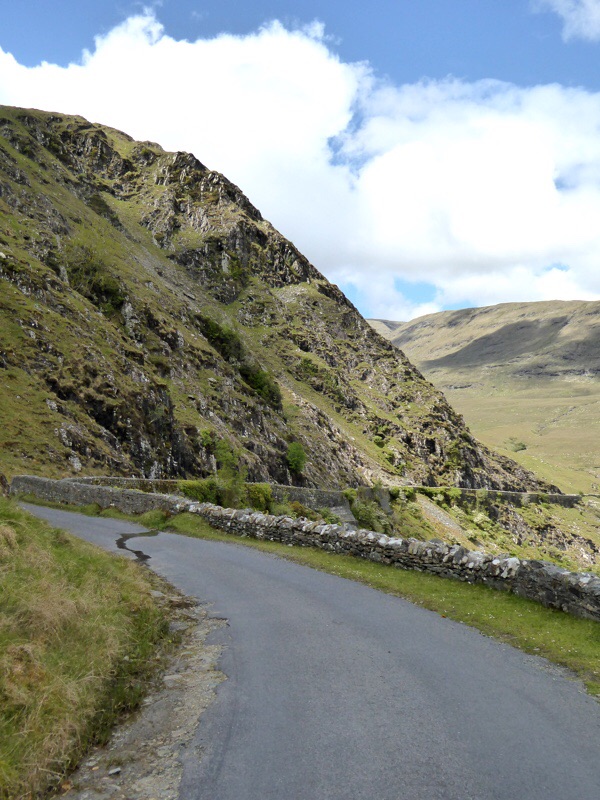 It also said, ” although this is a lovely hike, to rain soft quite boggy and wet.  The run is way-marked, but there is no distinct path.  We were instructed to walk uphill until we found the fast running stream and follow it uphill to the top of the pass.  For a while we couldn’t see the stream, but we watched for markers and kept going up.

Amazing!  They don’t ever say how far up we have to climb, so we just keep climbing.   The photos cannot really show what it was like,but here they are, 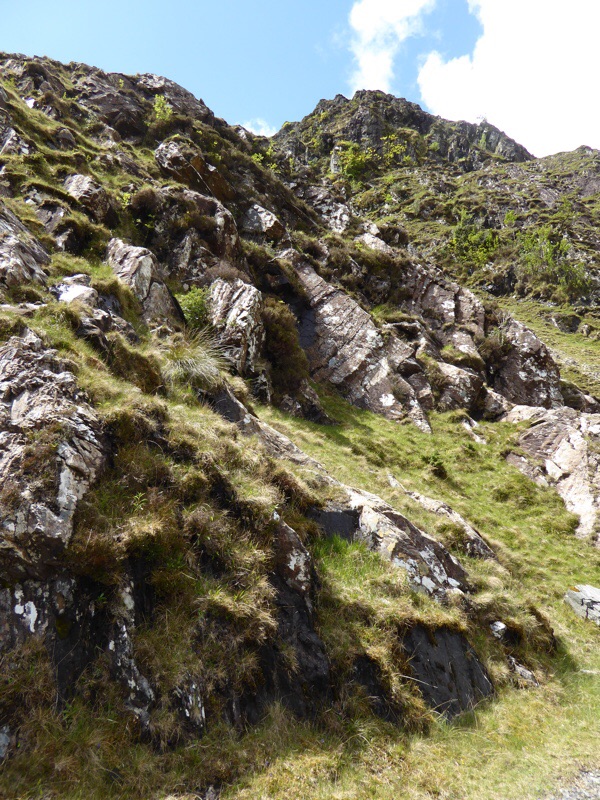 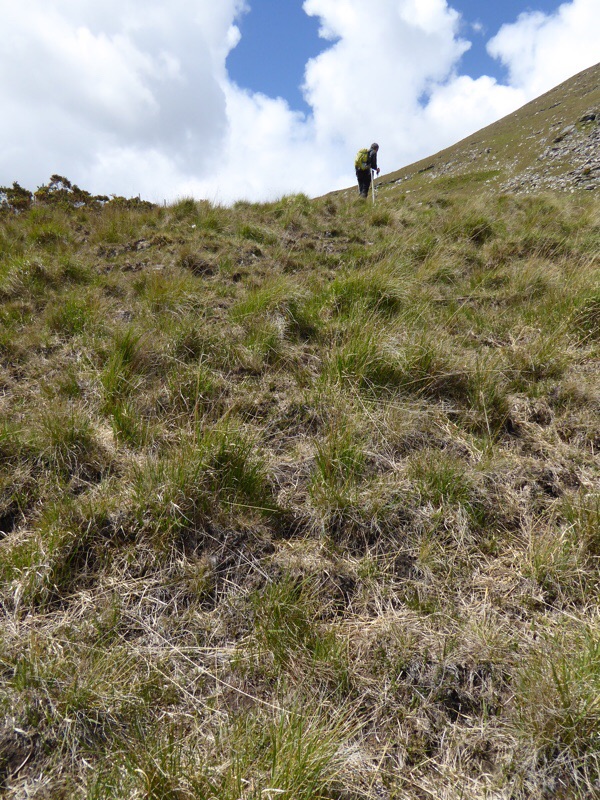 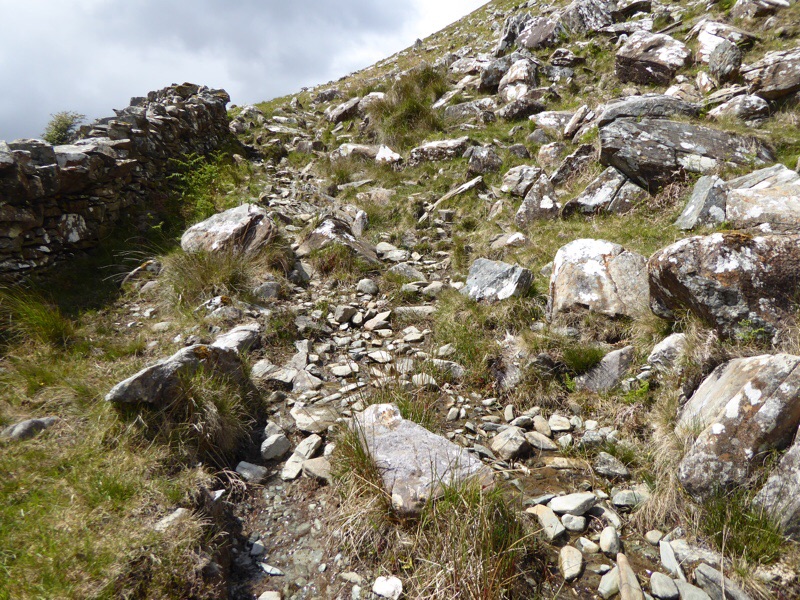 The directions said that the first section was quite steep so take care.  No kidding.

We just followed those white posts as we took in the views.

When we reached near the top, we began to get views of Lough Lugacolliwee. 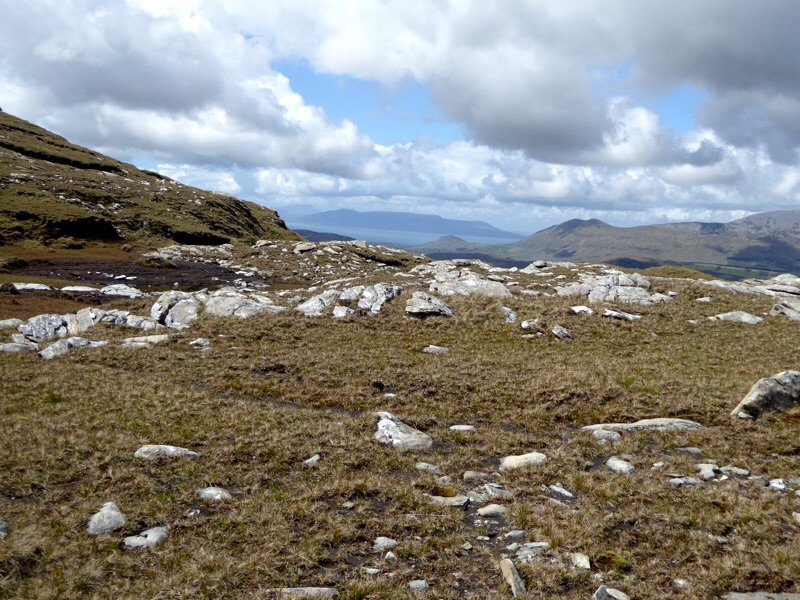 You can see some of the boggy paths in the above photo, but that part was not too bad. 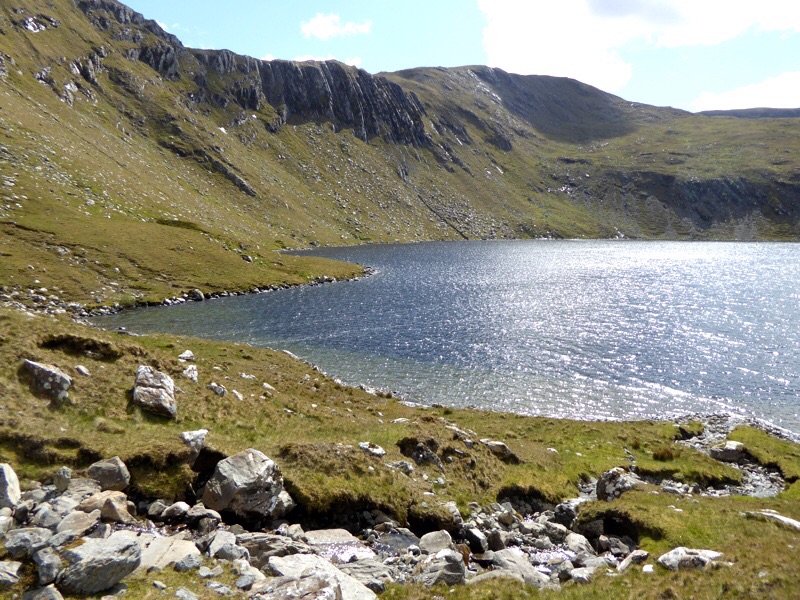 We we sat by the lake for a while and had a snack.

Much to to my surprise we had to climb to the top of the next mound.  Mary would wait at the top to make sure I was coming in the correct direction.  My hiking friends in Portland know I am directionally challenged and when there is no actual path, it is a real challenge.

We could see Croagh Patrick in the distance.  Even though we didn’t know it yet, that would be tomorrow’s hike.

While crossing the rest of the bog, I was surprised at how far I could make my legs stretch or how far I could actually jump.  My poles would go way down and I would know I had to really miss that spot.  Yes, we are amazing.

I know that some of you think we are really crazy and sometimes I even agree with you.  Yet it is absolutely exhilarating to be doing this.

Well, we finally made it down to the road and walked a couple of km. to Breslin’s Pub where we called Marian.   We stopped in for a drink.  Mary finally had her Guinness.  Marian’s  husband picked us up along with Flourin and Maurix (our two German friends) and took us to their lovely B&B – Moher House.  We also met up with the French couple again.

We relaxed and ate Marian’s fabulous vegetable soup and a fresh salad.  They talked to us about changing our plans for the next day and instead of doing our scheduled hike, climbing Croag Patrick.  More to come in the next post

One thought on “Leenane to Drummin”