We woke up very early this morning and could hear the winds whipping around outside.  I took a photo of the flag and we went back to bed.  We knew we were being picked up at 9:30 this morning, but we couldn’t decide what we wanted to do today. 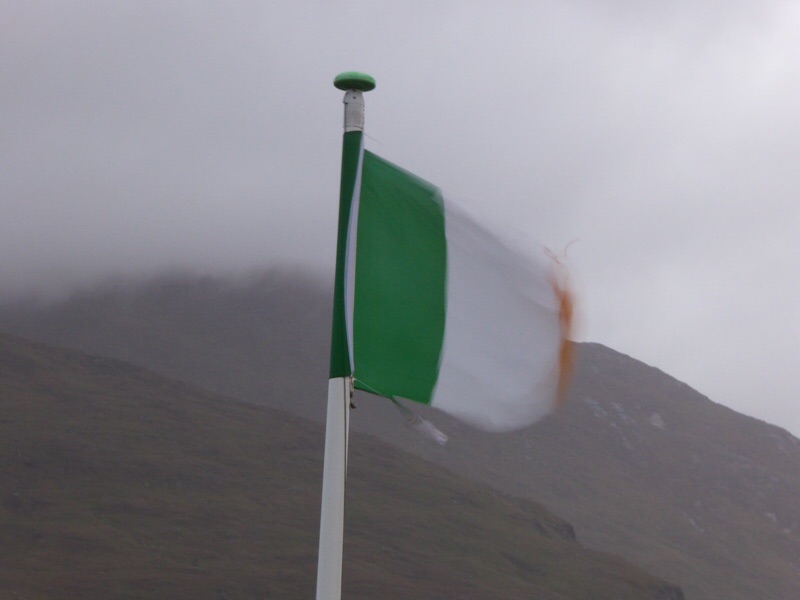 Well, Tony picked us up and took us to Rosroe Pier.  besides the pier was a cottage where the Austrian-Brittish philosopher, Ludwig Wittgenstein worked. The day’s plan involved walking along the Famine Trail and redoing 1/2 of what we did yesterday.  We tried to arrange a different plan with Tony that involved going to Kylemore Abbey, but he wasn’t sure if that was going to work if that was going to work.  As soon as we were dropped off,  I realize that I had left my polls in the room. Mary meant me one of her poles and off we went.   Here are a couple views looking back at the harbor. 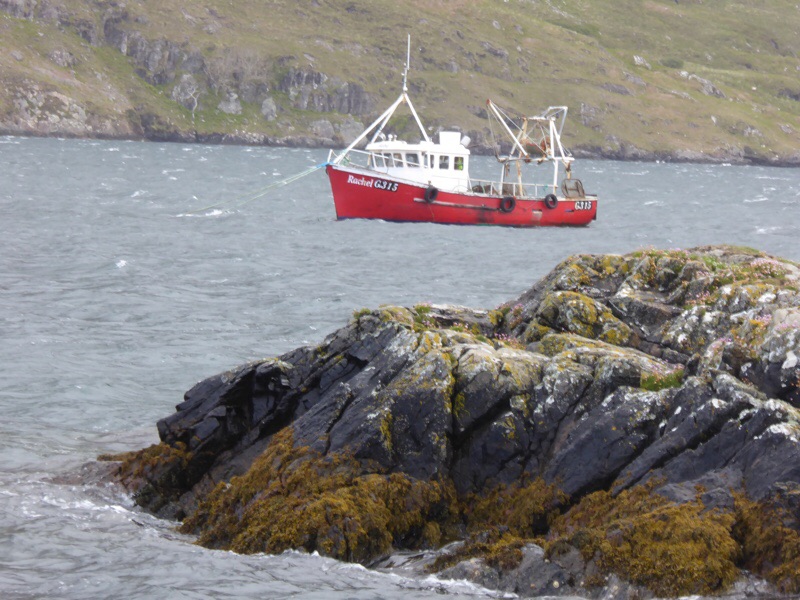 And soon as he started walking I was very glad to have one of Mary’s polls.

It was really beautiful trail looking into the fiord of Killary Harbour.   The fiord is one  i’m only three examples of glacial fiords found in Ireland.  The other two are Carling ford Lough and Lough Swilly at the borders of northern Ireland. Dramatically surrounded by mountains that rises steeply from the waters edge, the fiord stretches for 16 km  and has a maximum depth of 45 menters.

The next few photos are going to show you the trail that we were walking along.

Mary was, of course, ahead of me.  I was watching her go around the ends if the cliff.

Some of the trail was rocky and other parts were muddy,

At one point  I called ahead to her and asked her to turn around and take a photo of me.

We continued on the trail until a stone wall blocked our path.  It was a different crossing from climbing over a stile. 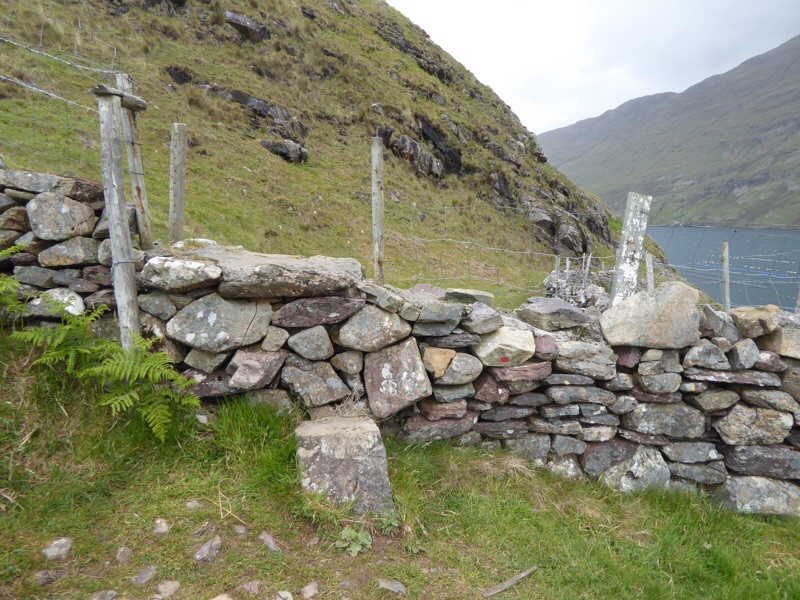 We were then on the old famine relief trail which dated from around 1850.  In Victoria times, it was considered wrong to simply give charity to people.   For that reason roads like this were constructed to provide employment for starving farm laborers during the potato famine in return for food.   But the food they used to pay the workers was corn maize.  They had no way to grind it and no idea what to do to prepare it.

We climbed over a fence and walked around the famine village of Foher. The great famine cause this little settlement to be abandoned.  We saw the roofless ruins and the old potato cultivation ridges. 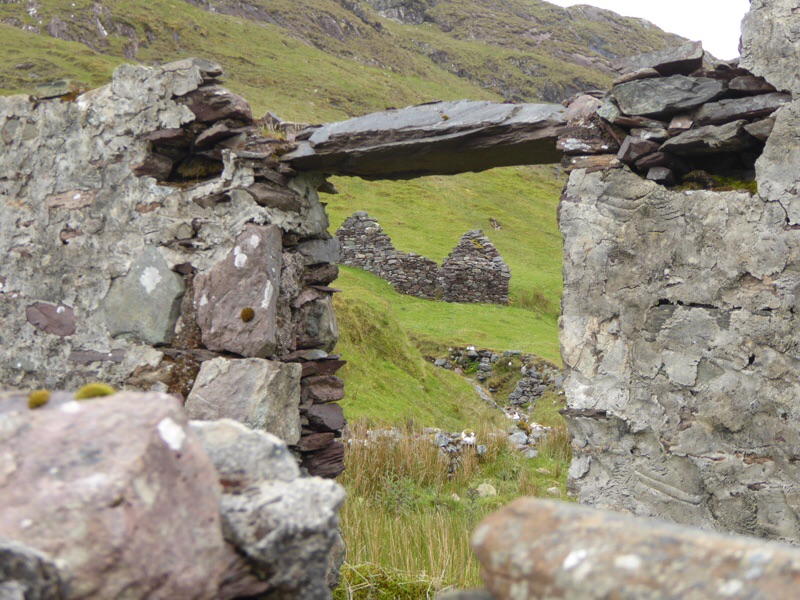 Can you see the ruins of the old potato cultivation ridges. 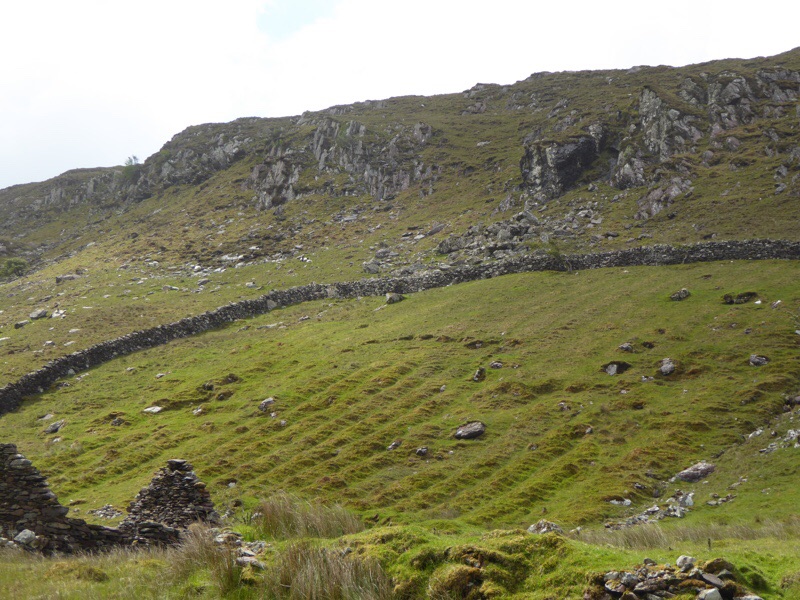 We were  supposed to look for a rugged little gap that marks  Salrick Pass where says the Devel tried to drag a local Saint over the mountains.  But this is all we could see. 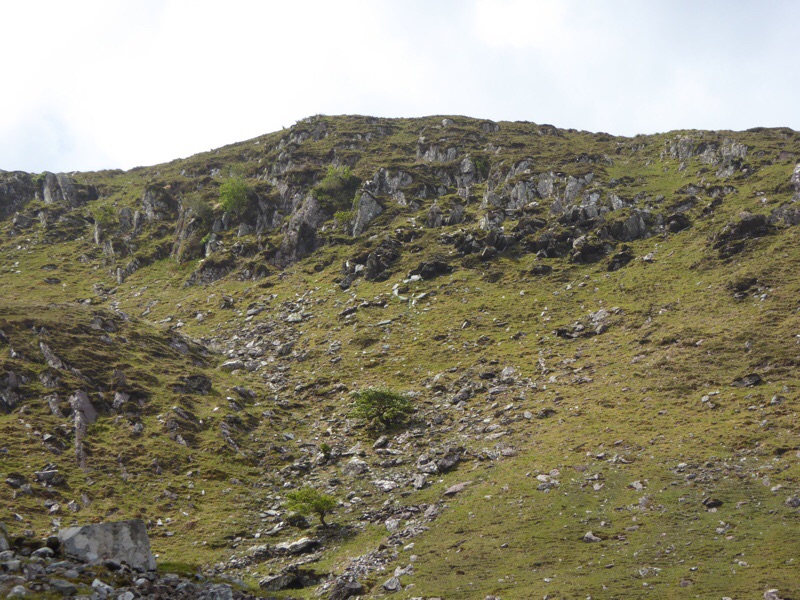 We continued walking along the trail.  We could see the lines of the mussels farms in the Fiord below us.  They bring them in daily and they are grown on ropes rather than on the bottom of the sea.  So they are much cleaner. 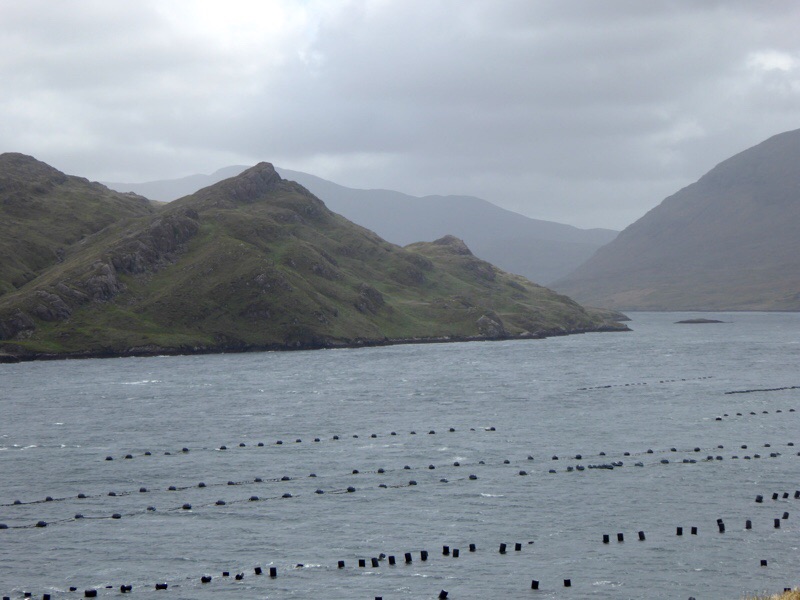 This may be the Owenearhaghbeg stream.  Anyway, it was beautiful. 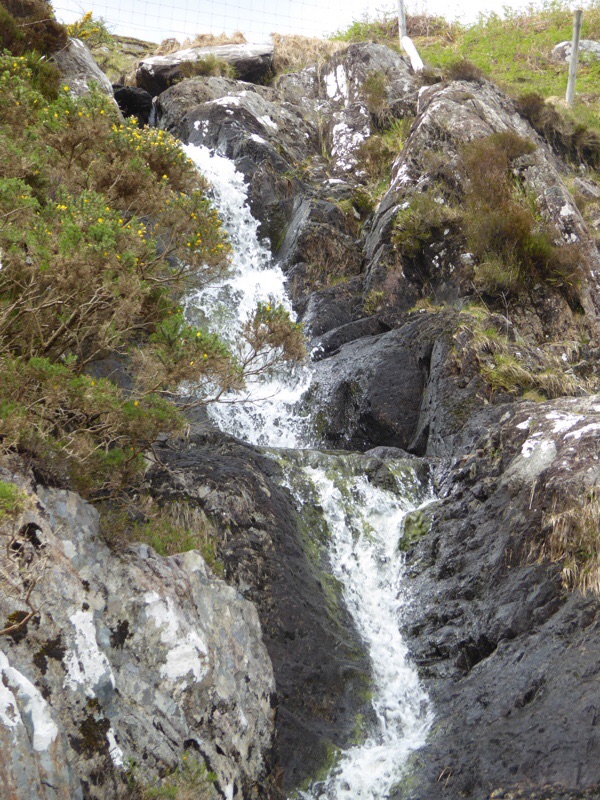 We continued on the trail enjoying the views. I like this rock. 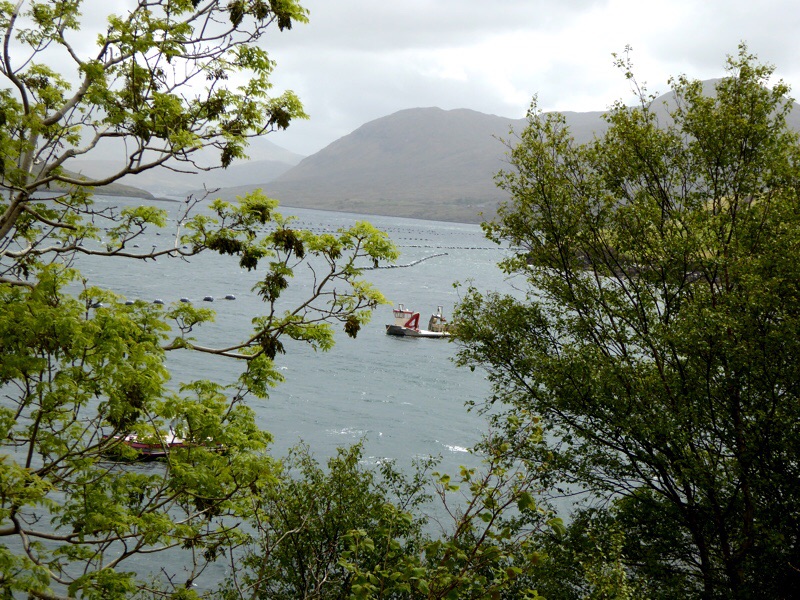 Of course I still can’t resist the sheep and lambs. 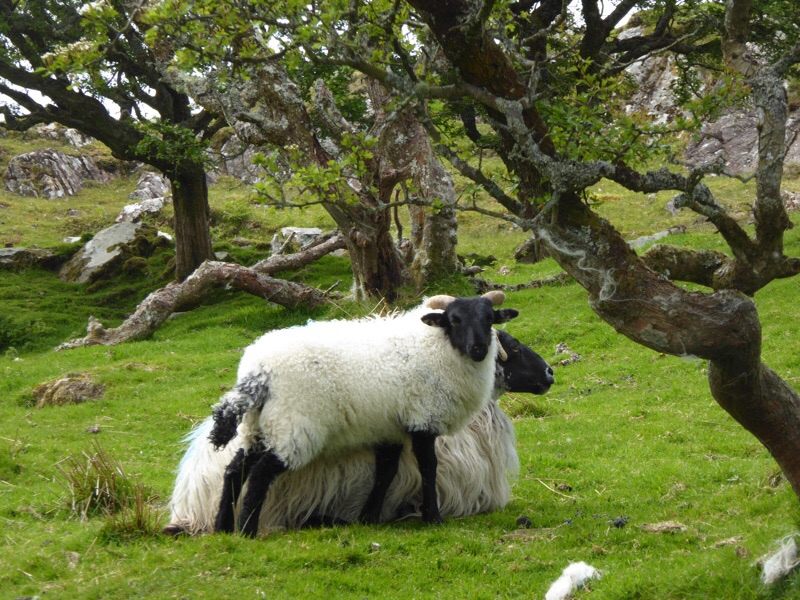 When we reach the end and N59 main Rd., we called Tony. He was available to take us to Kylemore Abbey instead of walking the trail we had done yesterday.  It had been recommended by some Irish travelers we met last night.

It was quite a structure.

I did take a couple photos of the inside, like the dining room and the Jacobean oak paneling on the walls. 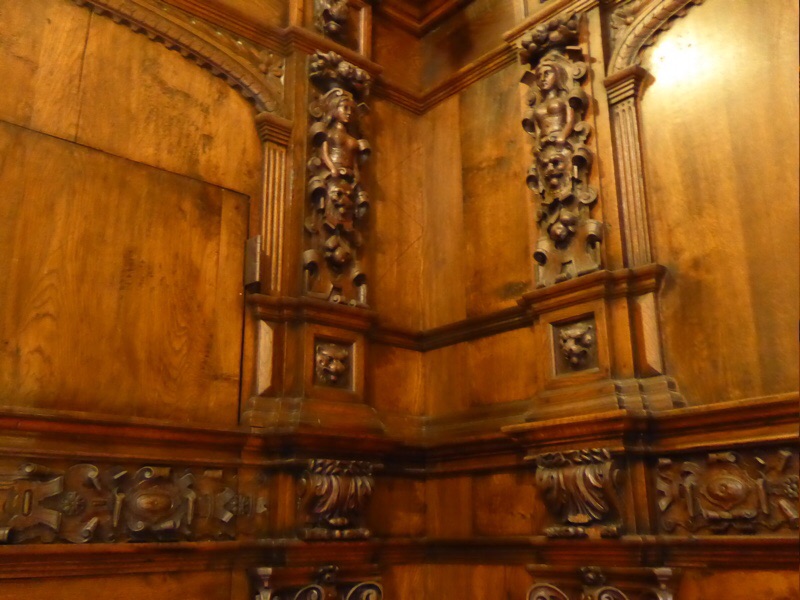 It was the home of Mitchell Henry (doctor, industry tycoon, politician, & pioneer 1826. – 1910) and his wife, Margaret (Vaughan) Henry. They had visited Connemera while on honeymoon in 1850.

Margaret was so charmed by Connenera that  Mitchell returned and purchased 15,000 interstate is a romantic gift for her and created one of Marilyn’s most iconic castles.  They had 9 children.  In 1874, this family holiday in Egypt and Margaret feel ill with dysentery. She died in 16 days at the age of 45.  Mitchell and her body brought to cuddle more and laid to rest in the mausoleum on the grounds.

It is said that Mitchell came from an enlightened family in England (possibly Quakers) who believed in paying employees much over the going rate.  He created much needed employment for over 300 people.  there are other stories of the good he did for his employees and the area

There is a beautiful walled garden and a Gothic Church on the property, but we only had a short time there.  Tony picked us up and took us to our cruise which went the length of the fiord that we had just walked in the morning.

All in all it was a bit touristy this afternoon.  Although it was interesting, both Mary and I would rather be out on the trails.