I loved today!  Let me say that again.  I loved today! The day was partly sunny as we walked away from our B&B.   We had a view of  Lough Inagh with the mountains in the background. 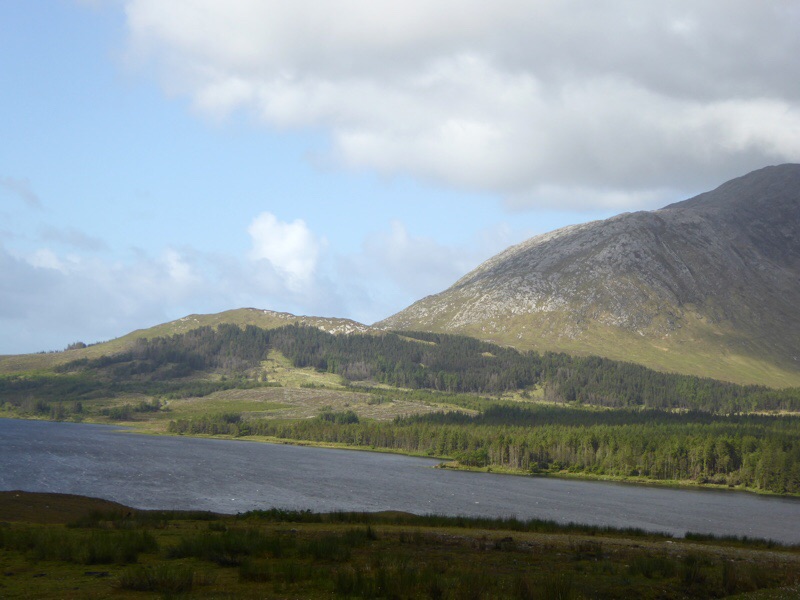 We looked back at our B&B from last night.

There was intermittent sun and clouds and the wind was blowing, but not too strongly.  The wonderful part of the wind blowing one’s how it created the dancing sun and cloud shadows that moved over the mountains. My photos will hardly do justice to the beauty of today. 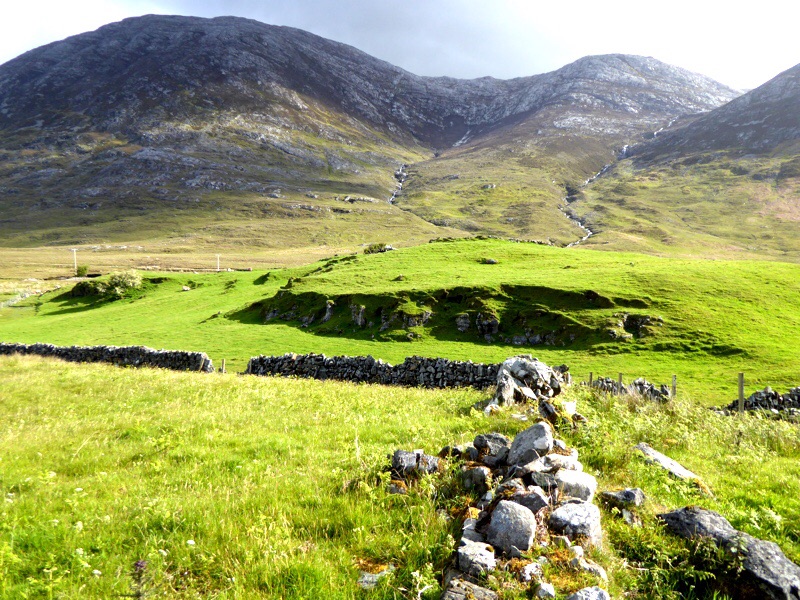 If I hadn’t lost the rubber feet of the end of my poles in the rocks at the Black Fort, I certainly would have lost them yesterday in the rocks or today in the boggy ground.  But I loved every moment. 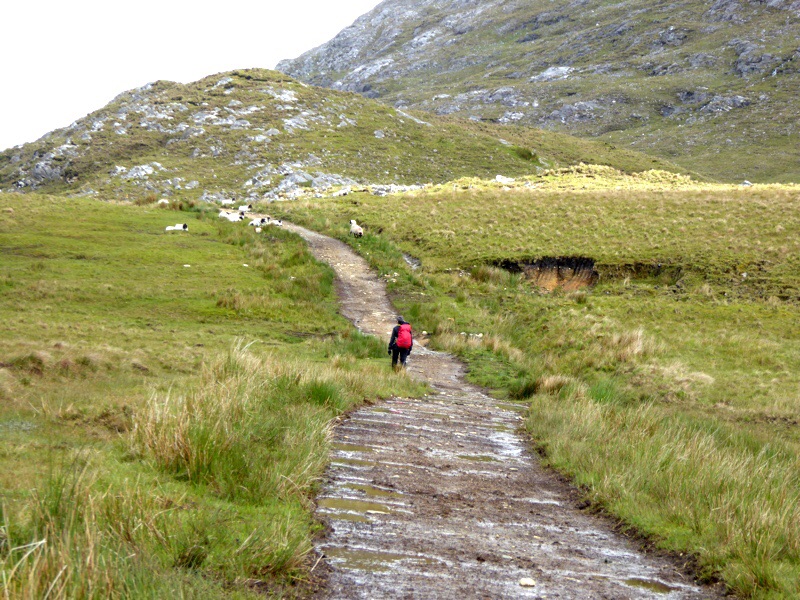 I was mesmerized with the views. 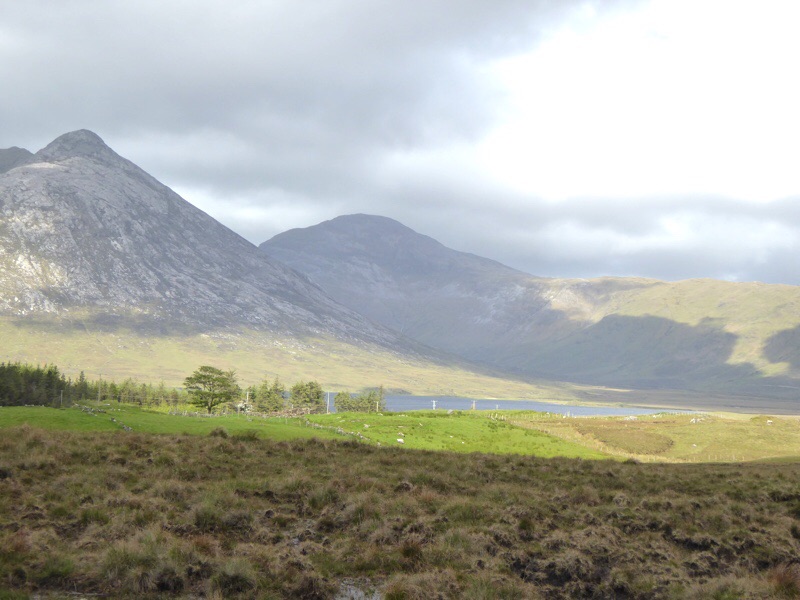 Words cannot capture how I was feeling walking through this valley.

What you see in the next two photos are the remains of an old Hill Farm that lies like a green island in the surrounding bog. These isolated farms were a long way from any village and we’re mostly self-sufficient with cattle and sheep grazing in the hills and vegetables being grown around the farm buildings. We can still see the cultivation ridges were potatoes were grown a long time ago .

I know that I have written about this before, but it is hard to believe that these remote areas were quite densely populated 180 years ago, but before 1845, Ireland’s population was 8.5 million – double what it was 100 years later.  Most people lived on very small farms in this area of Ireland.  To provide enough to eat from their small plots of land, they lived almost exclusively off potatoes – which  grew even in poor soil and provided most necessary nutrients and vitamins .

This changed during the great famine between 1845 and 1852 when the potato crops failed year after year. An estimated 1 million Irish men, women, and children died of hunger and disease.  Millions more left Ireland and emigrated to Great Britain, the US, Canada, Australia, and elsewhere. The west of Ireland was depopulated as the Irish spread far and wide across the globe. Today, there are an estimated 80 million people worldwide that claim Irish descent.   I can’t help but wonder how it would’ve been different if England have not been exporting the food that would have fed the Irish people.

Walking through the blog by trails and negotiating stream after stream just didn’t matter. 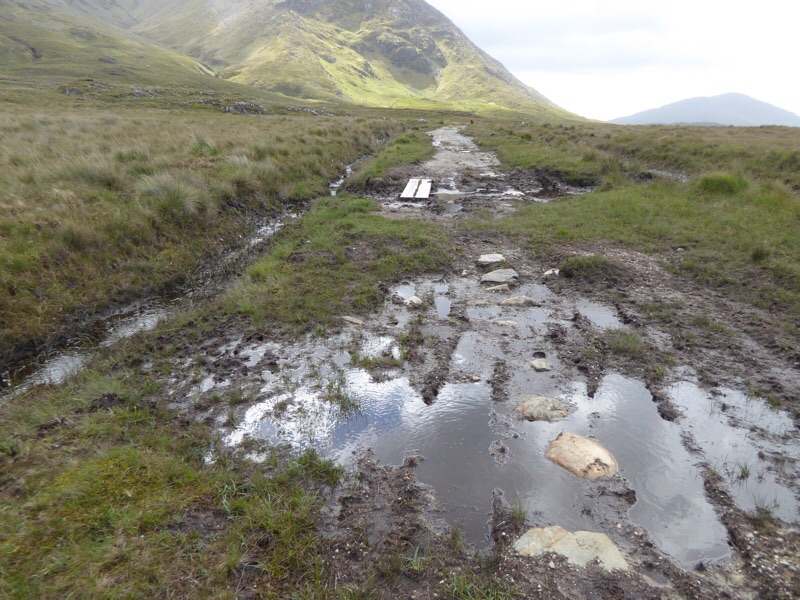 They actually called the above grassy, boggy field a pathway.  But I didn’t mind.  The mountains were so spectacular.

I was surrounded by 360° of mountains – that’s right, 360 degrees.  I tried to take a couple panoramas that I will upload here. But, again, the photos just can’t show what it felt like to be walking all alone in that valley.

Perhaps some regular photos will be better. 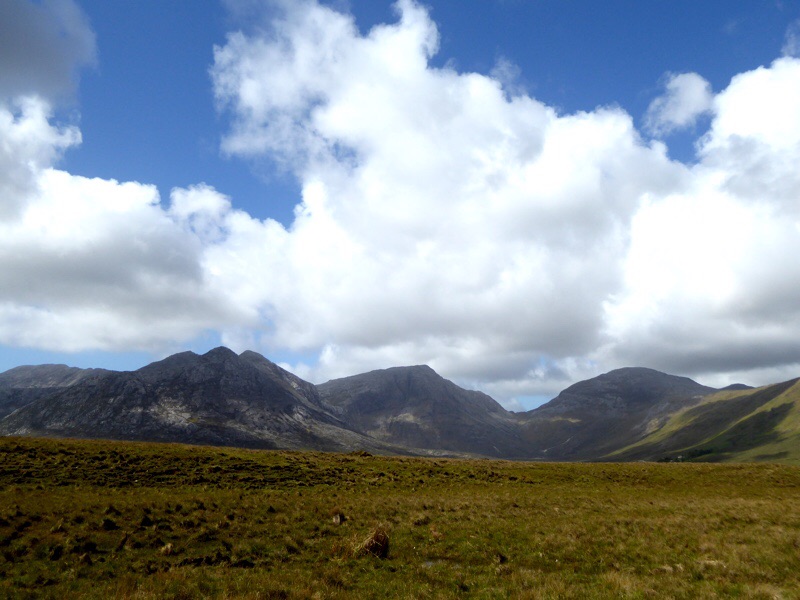 Just a small stream I had to cross.

And another her grassy path. 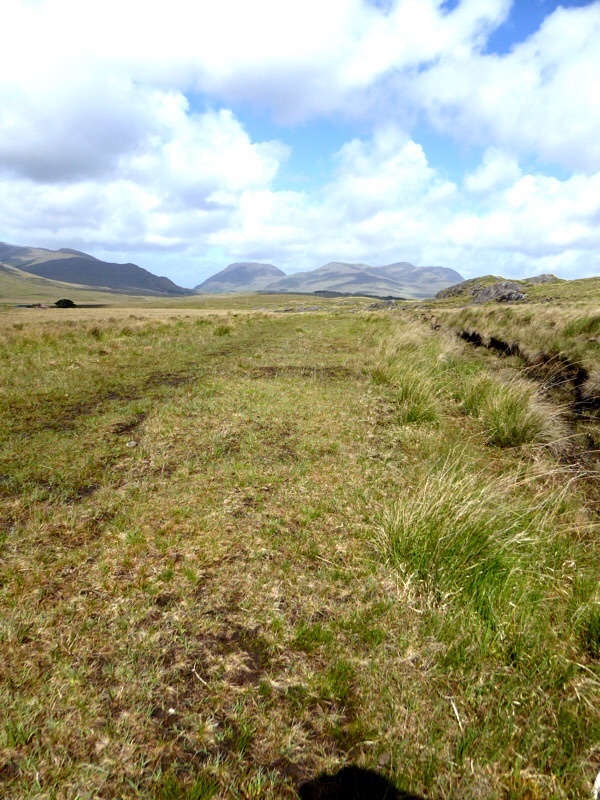 Where the path crossed this stream,  I decided it was too steep. So I found another place to cross. 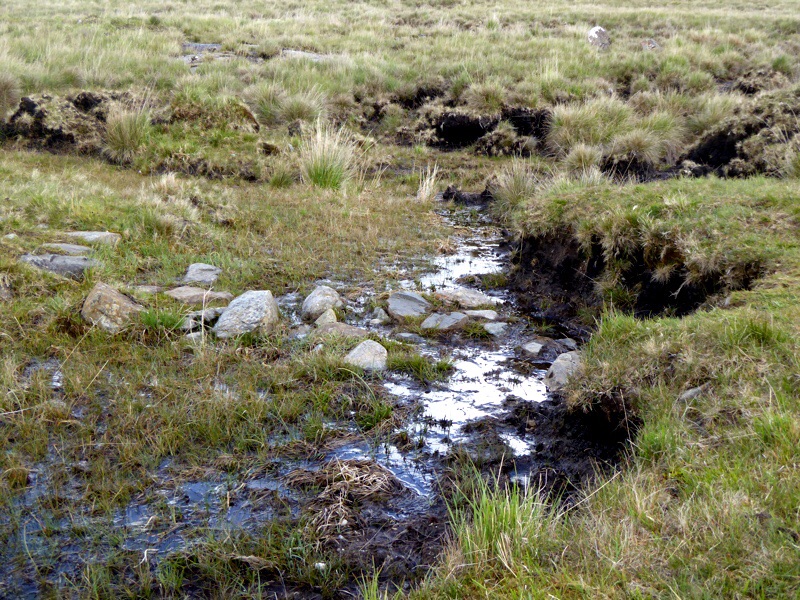 It just didn’t matter.  I was enjoying every moment. 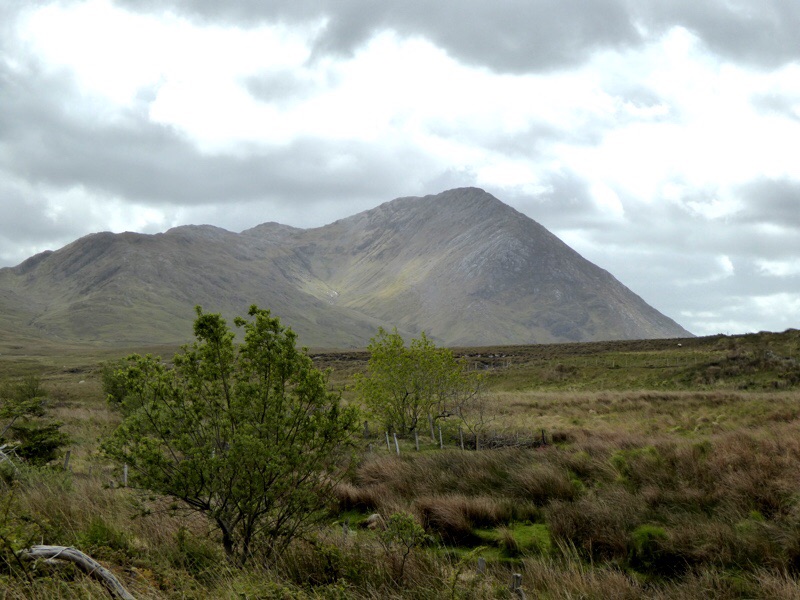 Then I caught up to where Mary had been patiently waiting for me – probably for over 1/2 hour. And we started up another boggy path.

Sometimes the very wet bog areas are quite beautiful. 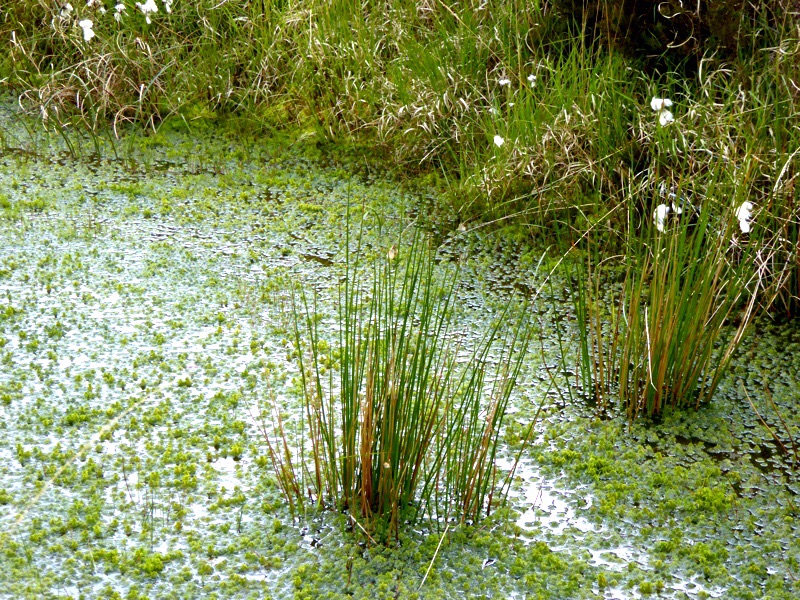 And we still had spectacular views. 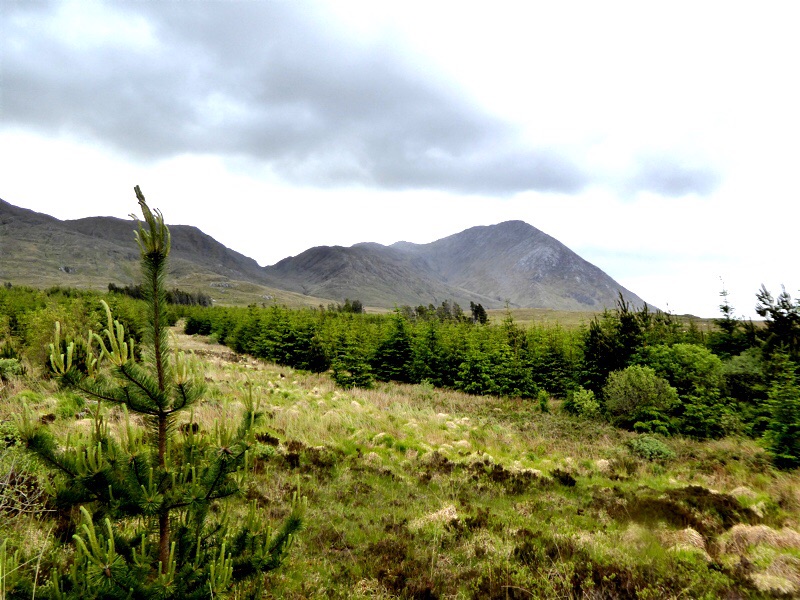 The Rhodie growing around the evergreen was beautiful. 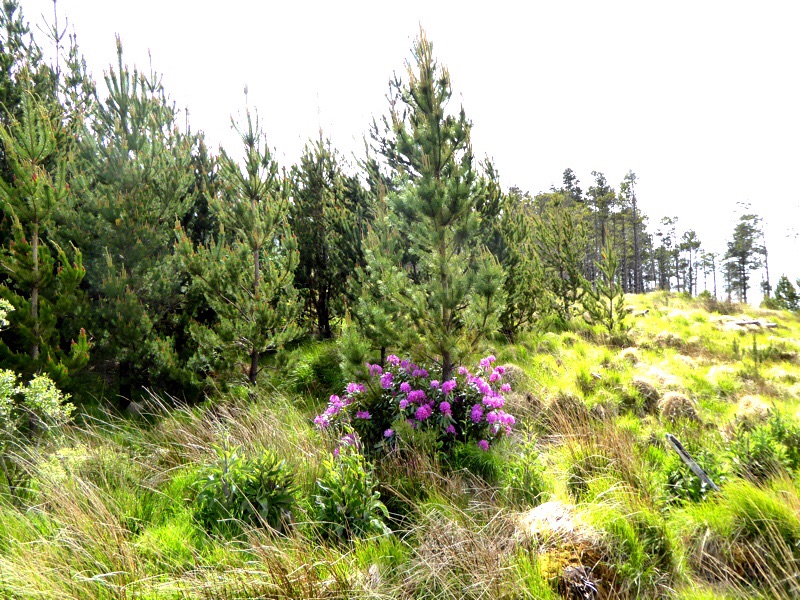 There goes Mary up the hill ahead of mr again,

I was still enjoying the stream beds

on both sides of the path,

How about this mossy covered rock? I know – we have that in Oregon, but I am seeing it in Ireland.

There was an abundance of this plant which I think is like the one my friend, Jan Phillips, has in here yard.  Somebody will verify, 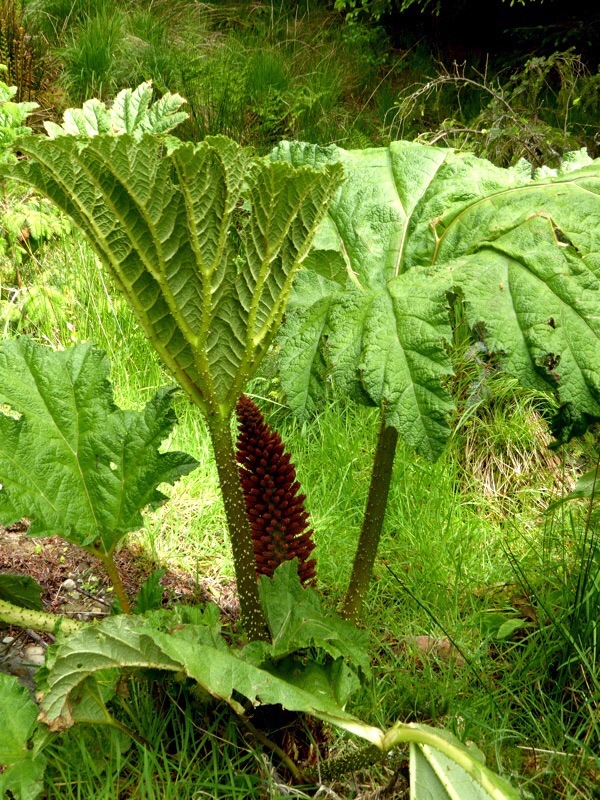 The gravel path was easy to use. 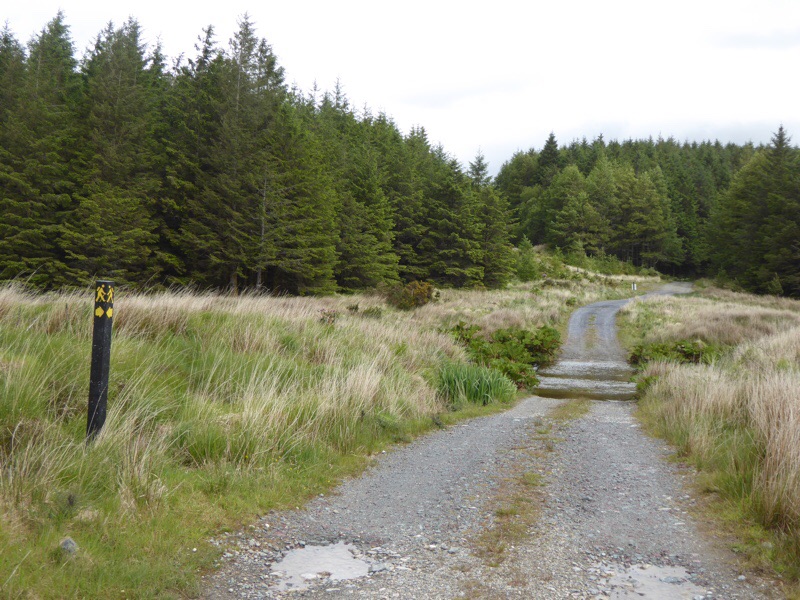 The route did take us around the Bunowen River so we didn’t have to wade through it. There were a lot more of those huge leaf plants. 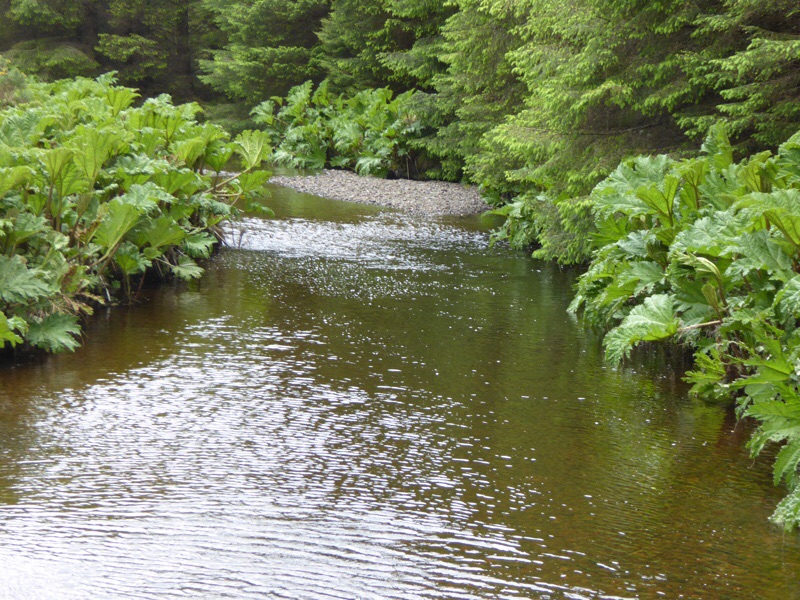 It was right after that when we were hit with a rain squall.  I brilliantly grabbed my rain kilt out of my pocket and put it around myself.  I was so proud of myself for getting it on so quickly.  Then I continued up the gravel path through the woods to the next stile.  That is when I discovered that I had missed a left turn when I was putting on my kilt, so I had to retrace my steps to find my way.

I found the left turn I had missed and again was walking in the bog.

And a bit more bog. 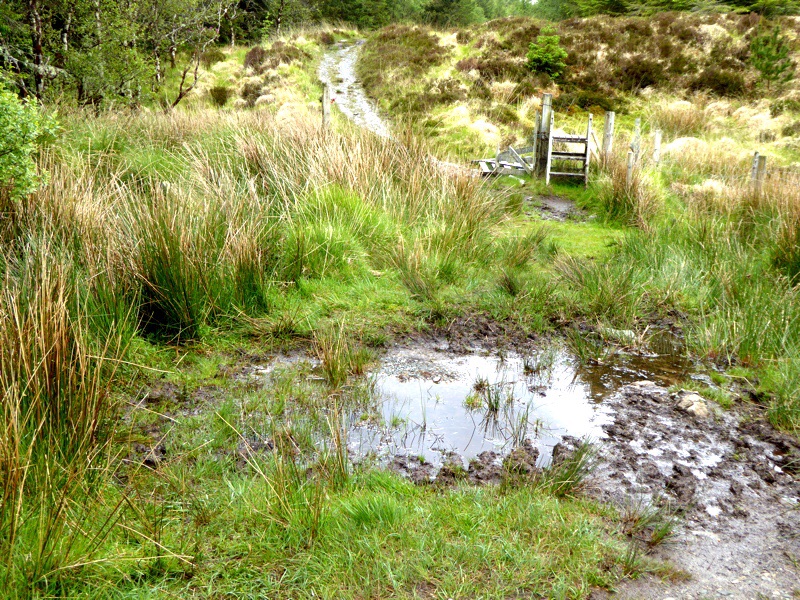 Before I  started up this road I took a photo of this sign. 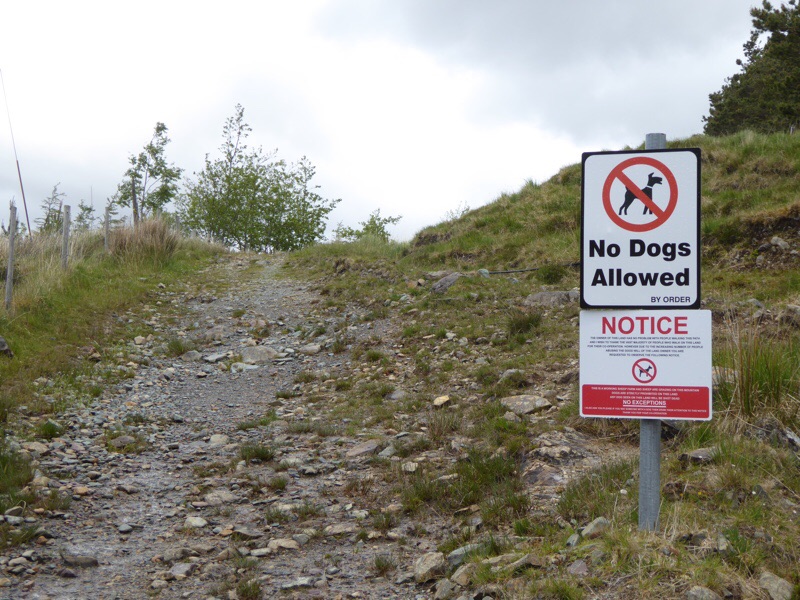 A couple of days ago I saw a sign that warned that any dogs on the property would be shot.

After a bit more walking I reached a track called The Old Killary Road.  The Killary Fiord came into view. 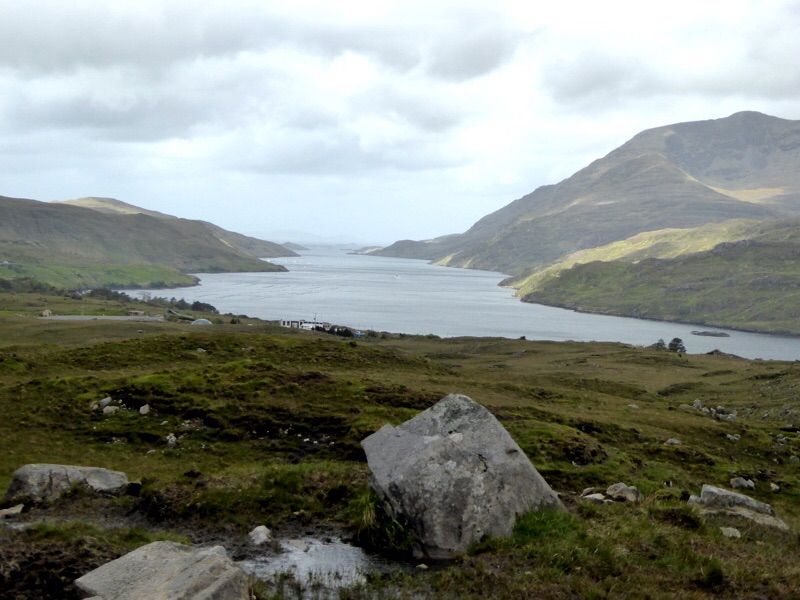 Each turn of the path brought a new view. 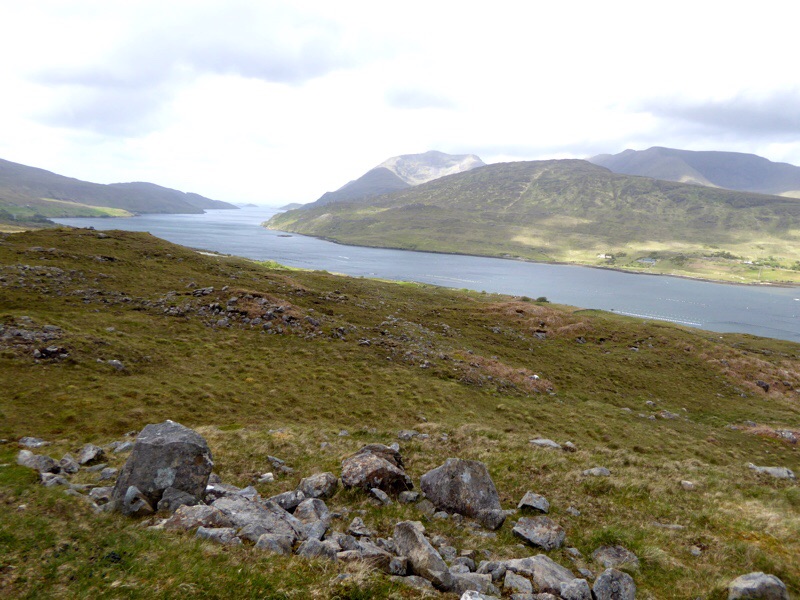 The path was a bit messy, but the views continued to be amazing, 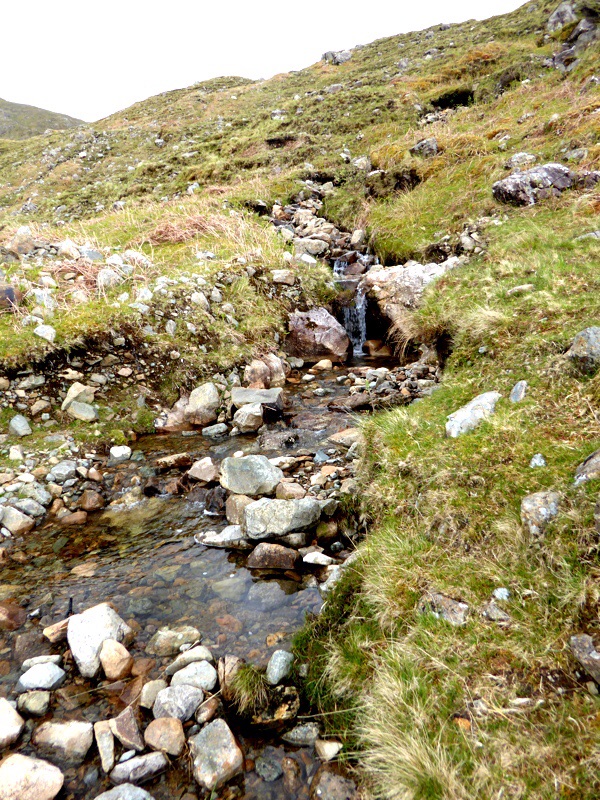 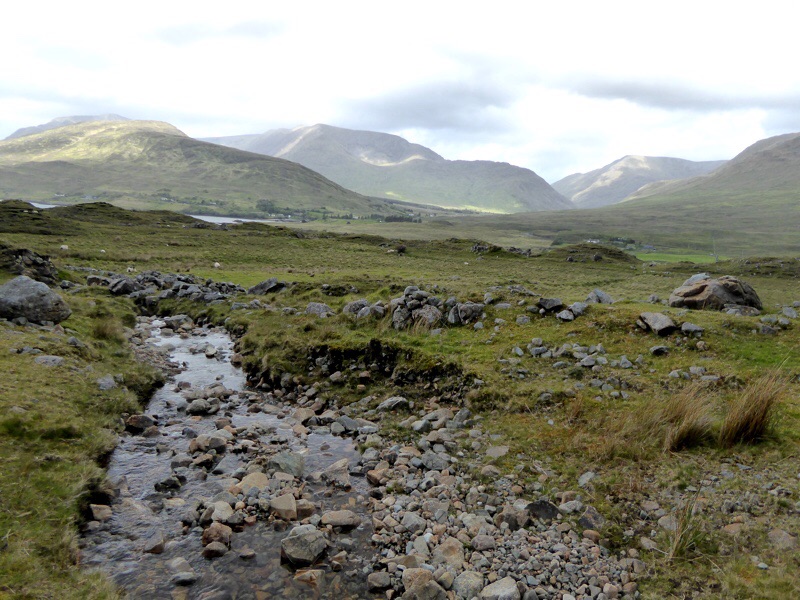 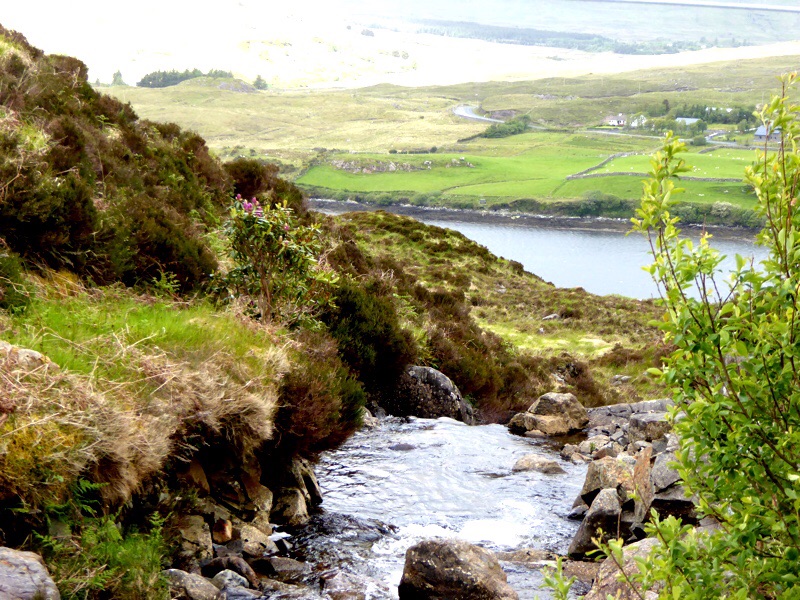 And views of the Killary Fiord … 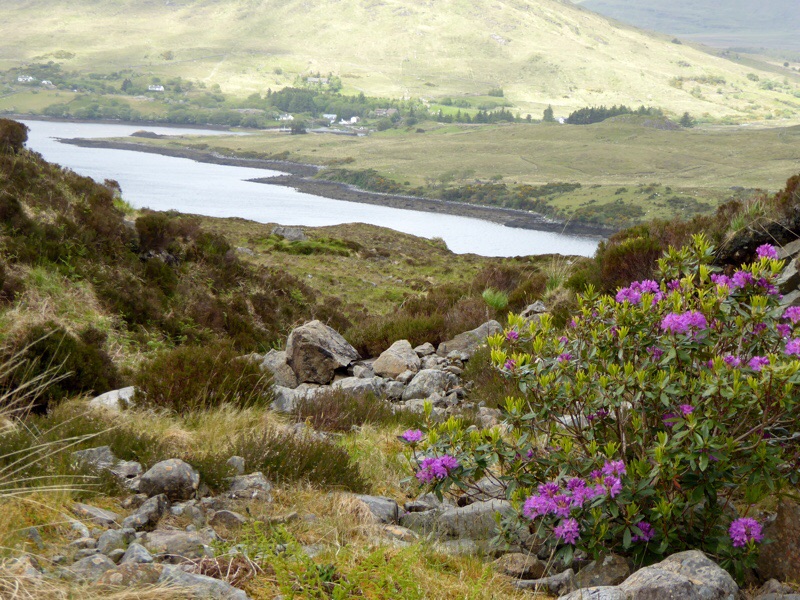 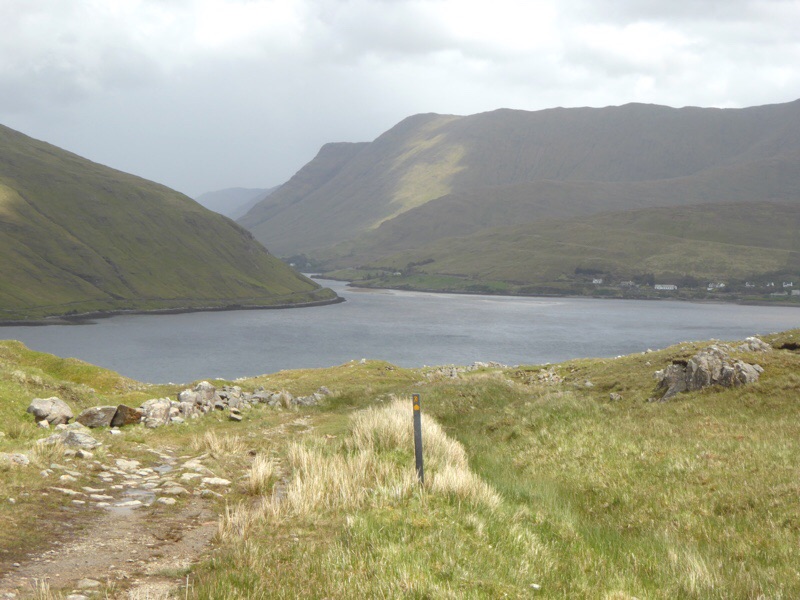 Then I reached the N59 where Mary was again waiting for me.  We walked the last 1.6 km into Leenane.  I found this sign an interesting way to tell people to slow dawn

We arrived at the Portfin Lodge B&B at about 3:00,  Our plan was to take the 4:00 cruise into the fiord, but we found that it had been cancelled due to very high wind warnings.

Leenane (from the Irish ‘An Líonán, meaning “where the tide fills”) is a little village on the shore of Killary Harbour.  It’s located on the northern edge of Connemara, in a valley between the mountains of Munterowen and Devil’s mother.

The village was the setting for the iconic 1990 film “The Field” which stared Richard Harris, John Hurt, and Sean Bean and also for Martin McDonagh’s play “The beauty Queen of Leenane” which enjoyed successful runs on Broadway and I London’s West End.

In recent times Killary Harbour has become a centre for aquaculture, with mussels being formed in the deep, clear waters of the fiord.  Fish cages belonging to salmon farms and mussel rafts are a prominent feature along with the boats that service them.

In addition to the Dolphins, seals, and otters that swim in the waters of the fiord, Killary is also a habitat for a large variety of bird species, including mallard and tufted ducks, whopper swans, barnacle geese, gray heron, and ringed plovers in addition to numerous sea birds.

We didn’t get to the town today because the winds and rain arrived and the windows at the B&B were shaking.  Have I already said that we have been told several times that this has been the worst late May and early June weather in 30 years.

So we stayed at the B&B for a delicious dinner.  I was so full that I had to take my chocolate tort into the living room to eat after I finished this post.

I was commenting on how I loved the green hills and mountains and I was told tonight that they actually have not turned green yet.  We have heard two different forecasts for tomorrow, so I can only sit here in the living room, enjoying the views form the windows, listening to the wind, and enjoying my tort before I hanker down with my Kindle. 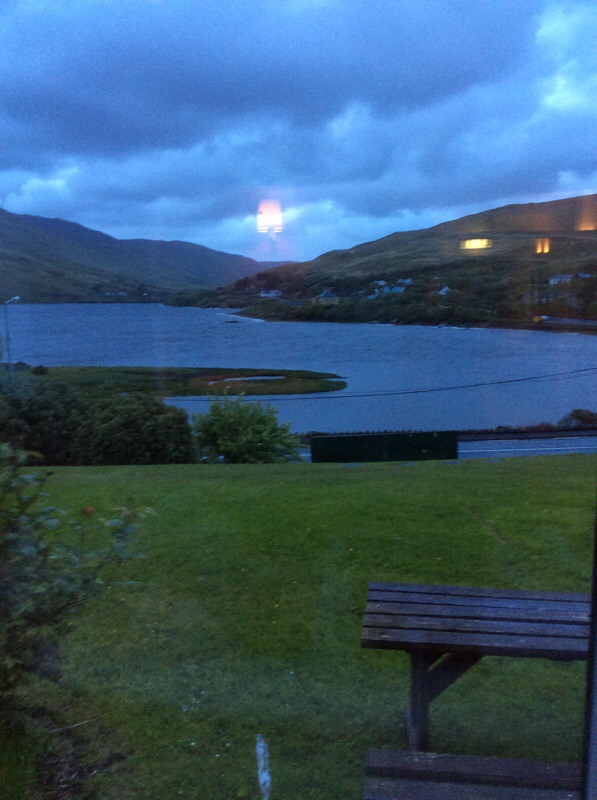 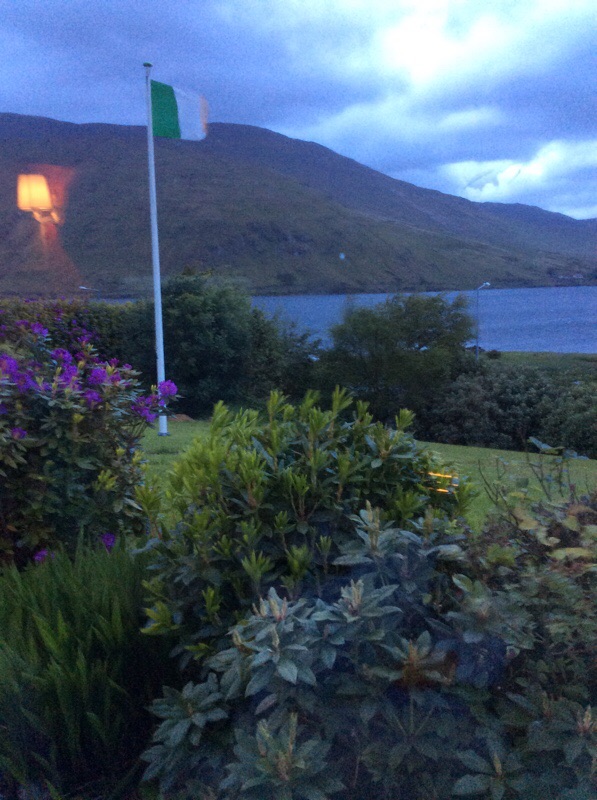 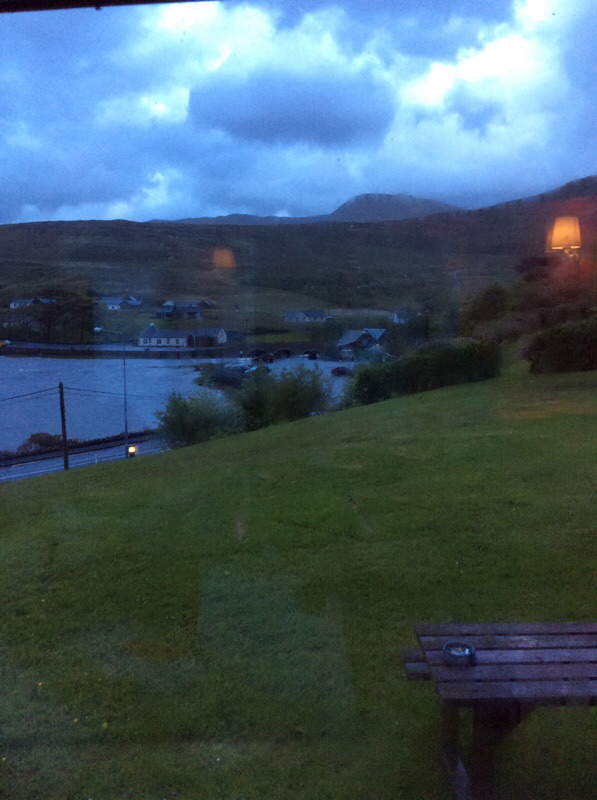 2 thoughts on “Lough Inagh to Leenane”