We left our beautiful B&B

to start out over the Saddle of Masationpán.  Our host drove us to the bottom of the mountain.

It was a very misty morning, but we were hoping to get over the saddle before the rains came.  Mary and I started up the rocky slope and at first it didn’t seem too bad. 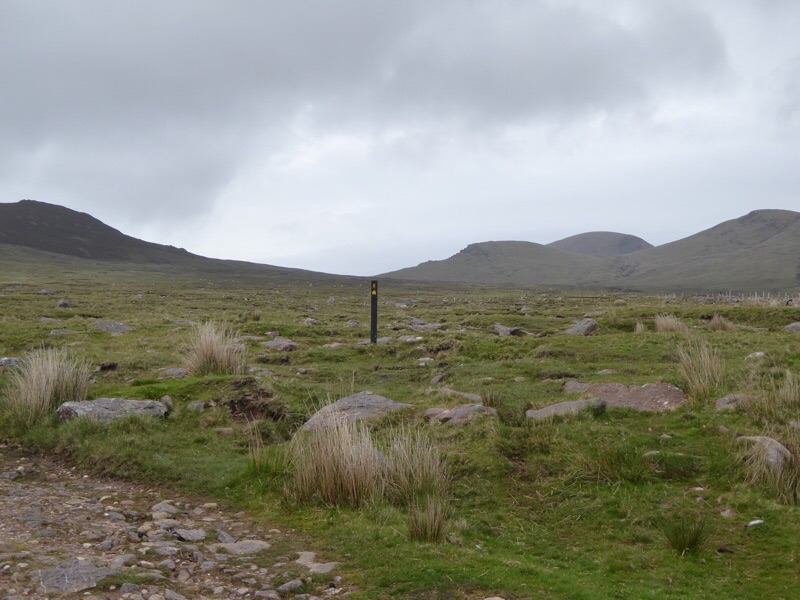 We even had a view.

To say that this hike was harrowing  is an understatement.  Photos and words only touch the surface of describing it. To my Camino friends and those in Oregon:  although it wasn’t as steep as either Dog Mountain or the Pyrenees, at least there was a path to follow.  The trail became more rocky. 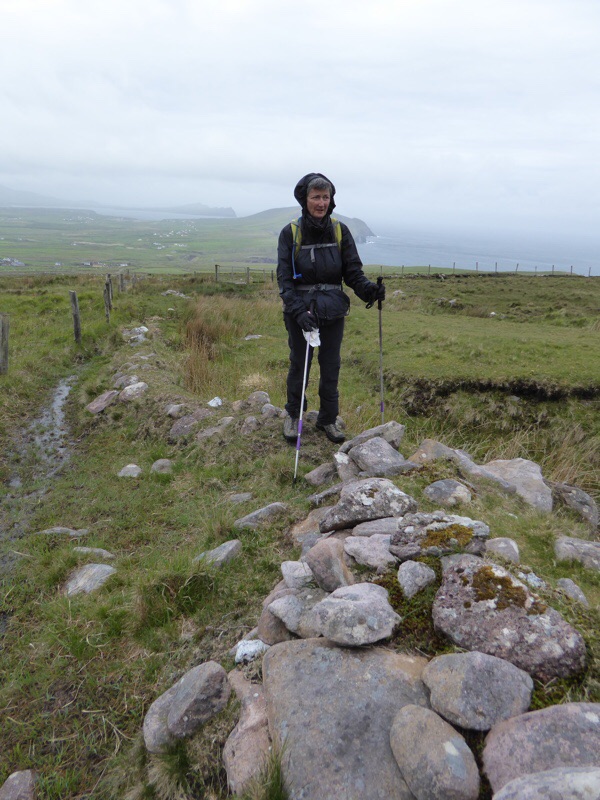 Then the gusts of wind picked up and they were blowingup to at least 60 mph.   I am trying to hold myself up with my pools as Mary took this picture of me. It was just before we went through the gate to really climb the saddle.

Then the rain and sleet started. I realized  that I better put on my rain kilt but I couldn’t find a place that felt safe to stop and take off my pack because the winds were blowing so hard. Dana and Bruce came up behind me and Dana  Took the kilt out of the back of my pick for me. I have use my killed a couple of times before, but this time I realized I can unzip it all the way and just wrap it around my skirt instead of having to step into it.. But  my hands were cold and I was having trouble starting the zipper. So Dana help me again. Then they went off ahead of me.

I was walking along with a group of German people as we almost reached  top of the saddle.   The rain kept coming down and the wind kept blowing. I had some difficulty pulling the hood of my jacket up over my rain hat  and it took me a few minutes. So by that time the group of people had gone over the top.  That was probably my most frightening moment because I couldn’t see where the trailer was  to start down the other side.

I remembered from a map we had seen at the B&B while we were eating breakfast  that I should probably head up towards the right. I still couldn’t see any trail in front of me so I Started down the grassy slope. I just kept hoping that I wasn’t going to find a cliff in front of me. Then I saw a rock with the yellow arrow painted on it off in the distance. I started heading  towards it and finally saw the German people on the trail below me.

I realize that they were calling up to Mary who had started heading back up the trail to find me. She thought I had injured myself. I yelled up to her and  and she started back down the trail. I pulled out my camera to take a photo of her.    There are some white spots in the photo because my camera was getting wet.

The rain, sleet, and gusts of wind continued as we tried to find the trail going down.  It didn’t seem to matter where we were walking because it was all just a mess. I was slipping on the mud and rocks and also stepping in puddles that we’re over the tops of my shoes.  Then I would notice that the actual markers are either above or below me and climb down or up to them. The whole terrain was actually at same..  Even though my camera was getting wet again I had to try to take a couple of photos of the so-called trail.

These photos just don’t even show how difficult it was.

When we finally reached the bottom Mary told me that she had fallen into a puddle that came up over her arms. Her knee had been twisted backwards, but somehow she was still walking. She is amazing.

It was a relief to be off the mountain, but we still had many kilometers to go. The gravel path that we were following was filled with puddles that went all the way across. We were getting wet from the top and the bottom.It didn’t matter because we were already soaked so we just walked right through them.

I actually had a great rolling fall on the gravel path   My polls flew out of my hands and I just rolled to the ground.   It was pretty amazing. I was able to get up and keep walking  with no injuries.

We vaguely remembered that there was supposed to be a shortcut into town, but somehow we were not on it. Finally we reached a main road and ice drop the car to ask for directions. The woman said we still had several kilometers to walk on the main road.  The two men she was taking them to their tent got out of the car and she drove us to our B&B.

Everything was pretty much soaked. Actually my raincoat and skirt were the only things that had mostly dried.  It was such a relief to get into a very hot shower. We actually each took her socks into the shower with us to wash them off. The mud was just rolling down the drain.

We stuffed our shoes with newspaper and put them by the fire. Then we each had a bowl of hot soup and relax for the evening. Several of us who have been on the hike talked about how difficult it was  and how amazed we were none of us were injured.

Our B&B (O’Connors)was actually the local pub and many people from town came to relax for the evening.  We had a great dinner in the dining room.

I I forgot to mention that O’Connors has been in the family since about 1830.

After dinner I saw a group of people playing bridge. I played a few hands with the women.   It is interesting how even after a day like that, we could just relax and enjoy ourselves.