First an update on language.  John told me that the people voted a couple of years ago to be able to change the signs back to the english version of Dingle.  They won by 96%.  The other town’s signs are in Gaelic, but Dingle is in both.  I think it was because tourists were confused.  When we hear people in this area talking to each other, they are almost always speaking Gaelic.

We woke up to a misty, drizzly morning and were concerned that we would not have the great views that we wanted today.  As we left the town of Dingle I looked back. 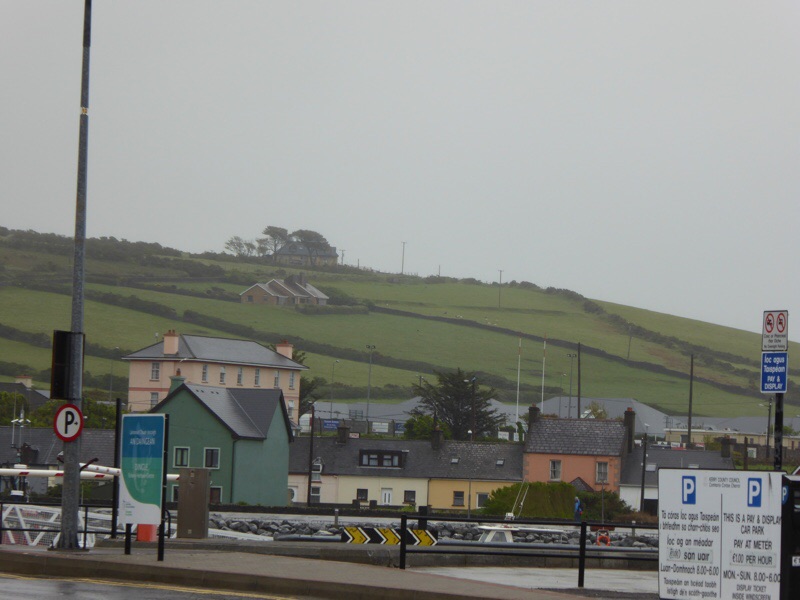 There were a group of kayakers heading out into the bay.

I had a conversation with a man who I thought was a local out taking a stroll.  I asked him about a tower that I could see in the distance and he told me about the church in town. He also was giving me information about the next town.  Then he said that in the 30 years they had been visiting Dingle this was the worst weather.  I asked where he lived.  Was I surprised when he said he was from New Jersey,  He actually sounded like a local.

Mary waits for me as she takes photos of ordinary Irises. 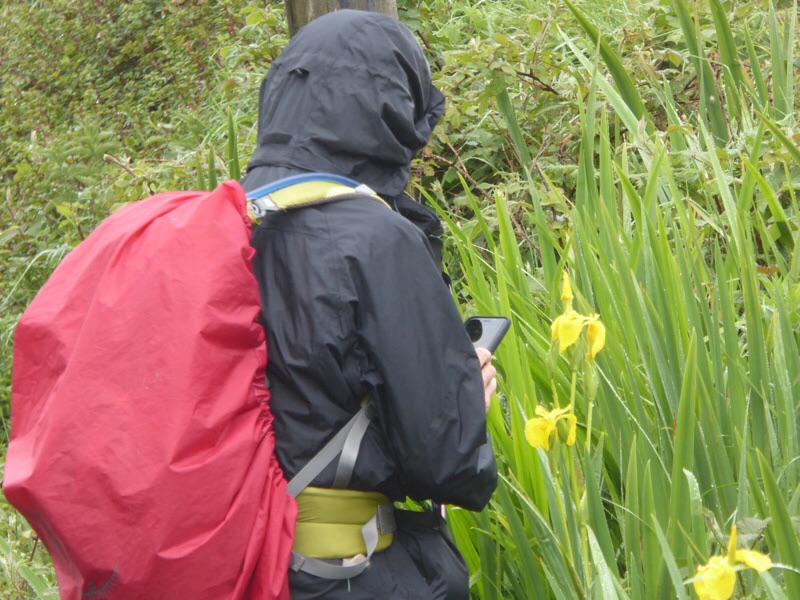 The rain drops on these were quite lovely.

We walked up the road for a bit and soon had a turn onto another muddy trail.  I didn’t think this one was nearly as the one yesterday (with the multitude of cow piles that looked like rocks) but it was 1.5 km. long.

It is nice to have leather boots which clean up so quickly when you walk through a field of wet grass right after the mud. 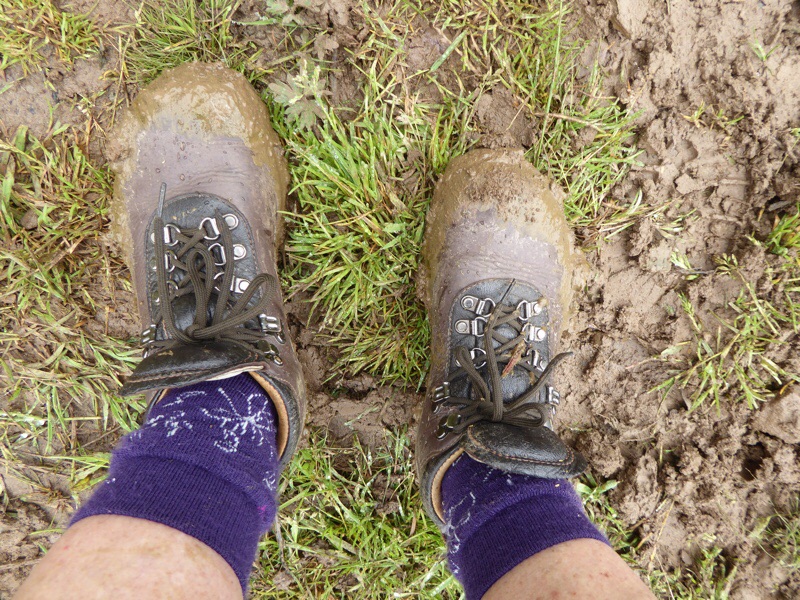 Then we walked on more lovely paths that were lined with Fuschia hedges again. There were many views. 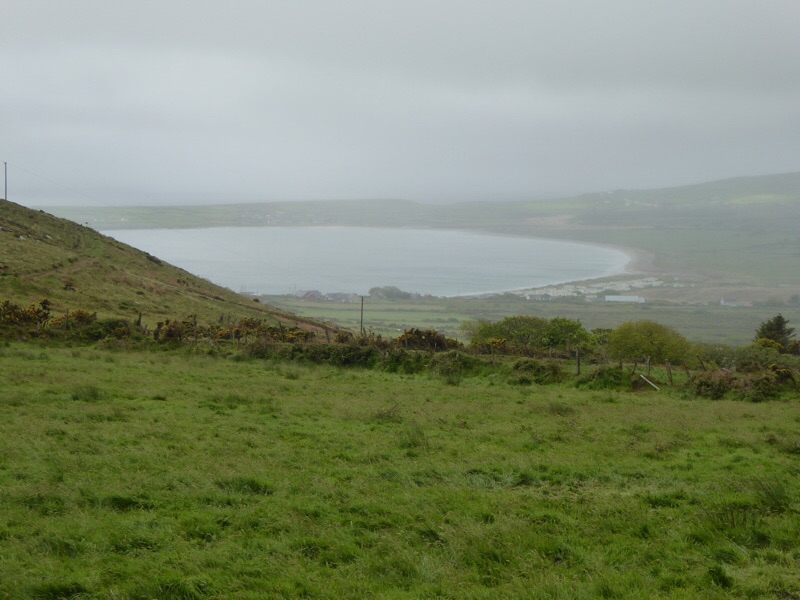 We arrived in a Ventry which is a small village next to the wide Ventry Harbour. Irish legends tell of a mighty battle fought here by the famous Irish hero, Finn McCool, and his Fannna army against a foreign invasion of Ireland led by the King Of the World, Dåìre Donn.  The battle raged for a year and a day and was only won after Tuatha Dé Dannan (the legendary inhabitants of Ireland before the arrival of the Celts) were called to help.

We stopped at the stone post office with a small grocery store for a lunch and sat outside in the small drizzle to eat. 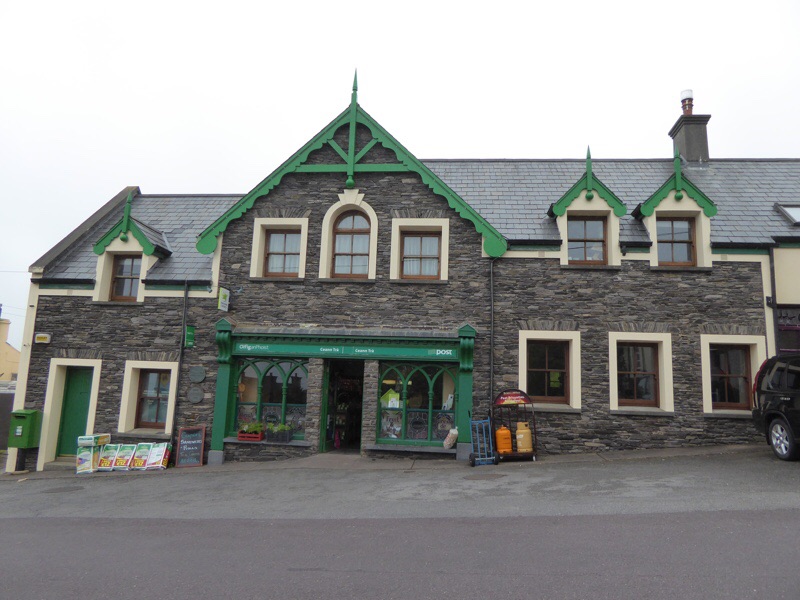 Then we just went a bit down the road to Skippers for dessert.  I had s scrumptious orange crepes.  The past owner, Skipper, was sitting at the counter.

By the time we finished our dessert the rain had stopped and we had a delightful  walk along the beach.  We crossed little bridges across streams coming into the ocean 4 times.  It absolutely loved walking along the beach. 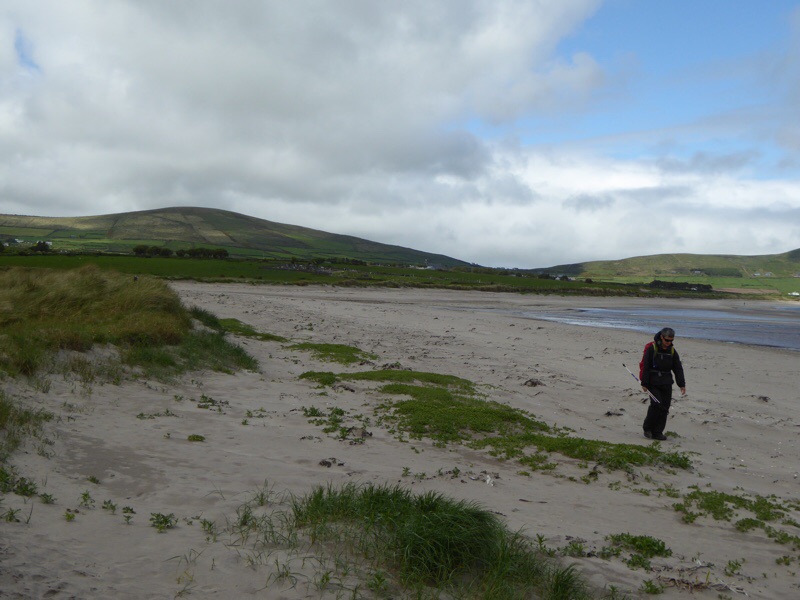 I think we walked a bit over 3 km on the beach before we had to go back on the road.  We passed a house where a local woman was working in her yard. 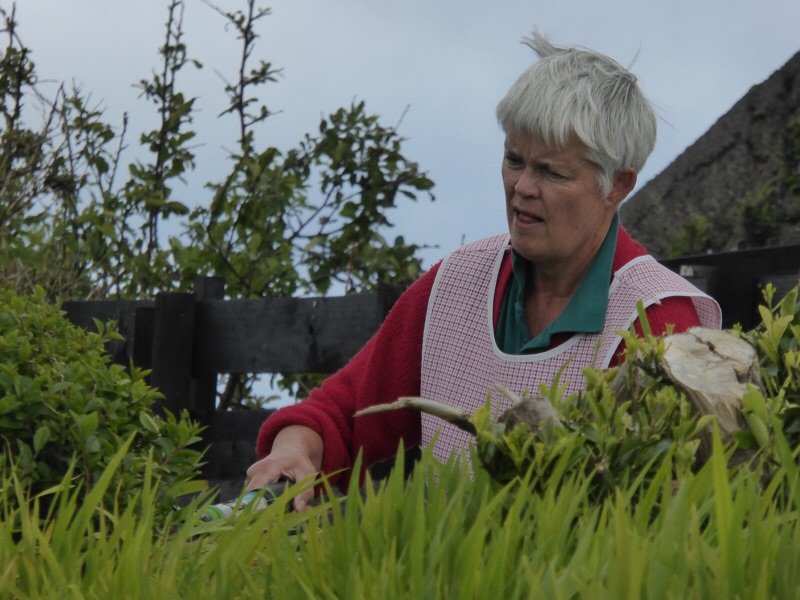 I stopped to talk with her for a few minutes.  It is so delightful to talk with the Irish people.  These are the friendliest people I have ever met.

We passed an old stone house that I liked.  Stone structures bring back Camino memories.

Our direction ion page told us to make sure we were following the Dingle Way arrows this time and not the Irish Camino ones because they tool different ways today. 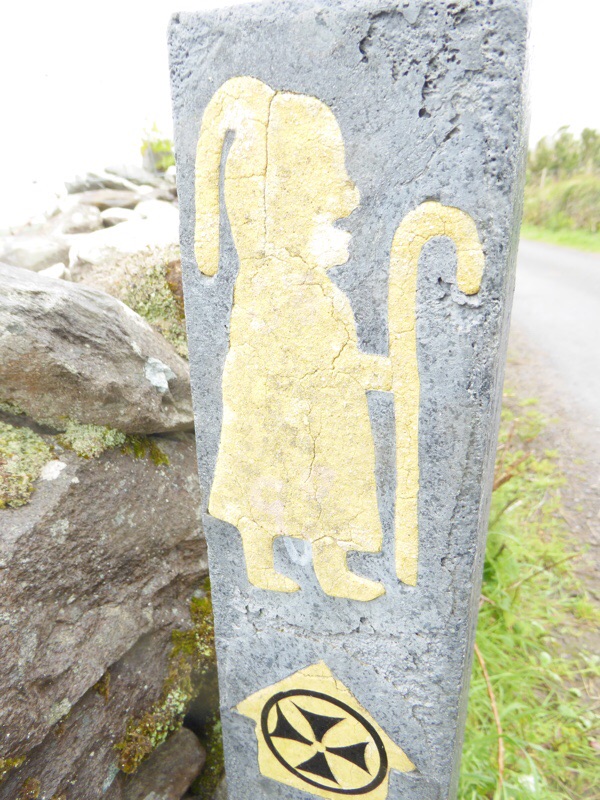 Finally after walking along a road foe a while, we came upon the Dún Beag Fort.  It is an Iron Age promontory on a cliff ledge above the sea.  It has four lines of banks and an inner dry stone wall. It was built on a sheer cliff.  They believe it was first occupied around the 8th or 9th century and then again in the 10th and 11th century.  But some testing of charcoal under the top soil produced a radiocarbon date of around 500 BC.

The walls around the fort were very thick.

The views from the site of the fort were spectacular. 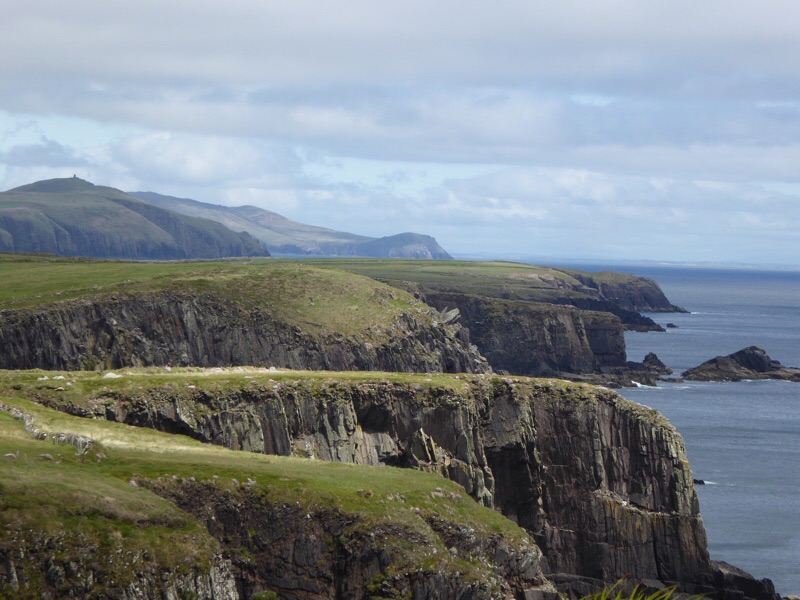 Then we went to visit The Slea Head Famine Houses.  They have been preserved as a memorial reminder of the tragedy of the famine which visited Ireland on numerous occasions.  In the mid 1800s the population fell by over 2 million.  Peasant families lived in this small hovel.  The stories are so horrific.

When we finished visiting here, we walked back down the hill and asked the woman at the ticket booth if there was a way over the hill from here so we didn’t have to back down the road.  She told us to just go through the gate at the top and past the white house.  So we climbed back up and found the gate which said not to pass.  Well, we weren’t going back down. 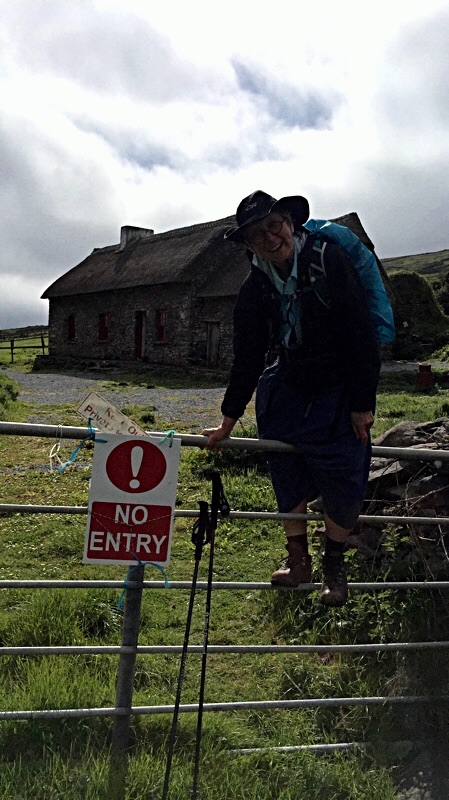 We came to a most fabulous path next to a stone wall. And a drizzly morning can become a fabulous day. This walk was so incredibly beautiful.  Here are a few of the inspiring views. 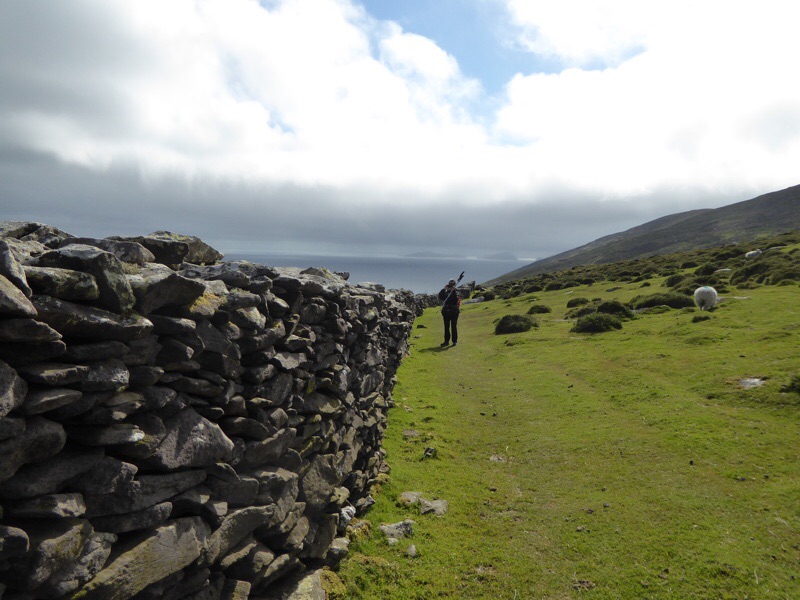 I wish my photos could capture the breathtaking sites.  Towards the top we came to a waterfall with a creek that I had to cross.   I was pretty nervous and really couldn’t figure out how I was going to do it.  But Mary was already across so I had to do it.

I had had to jump from the lower rock into the blog above.  This photo is after I got across.

7 thoughts on “Dingle to Dunquin and Ferriter’s Cove”