When we awoke at the Strand’s End House this morning, it was even colder than yesterday with high winds and some rain.  Joan suggested that we take a 4 hour tour today instead of hiking up high again.  Mary and I discussed it over our incredible breakfast.  I had a lox and salmon omelet, fresh brown bread (baked by Eamon), fresh fruit with homemade yogurt, and tea. We looked our the window and the small bushes were blowing around and it was raining – again.  We could see the rain dripping down the skylights.

We decided to do the tour so Joan called Muiris (the tour guy).  Then we said goodbye to our wonderful hosts.

And the B&B where we had so much fun. 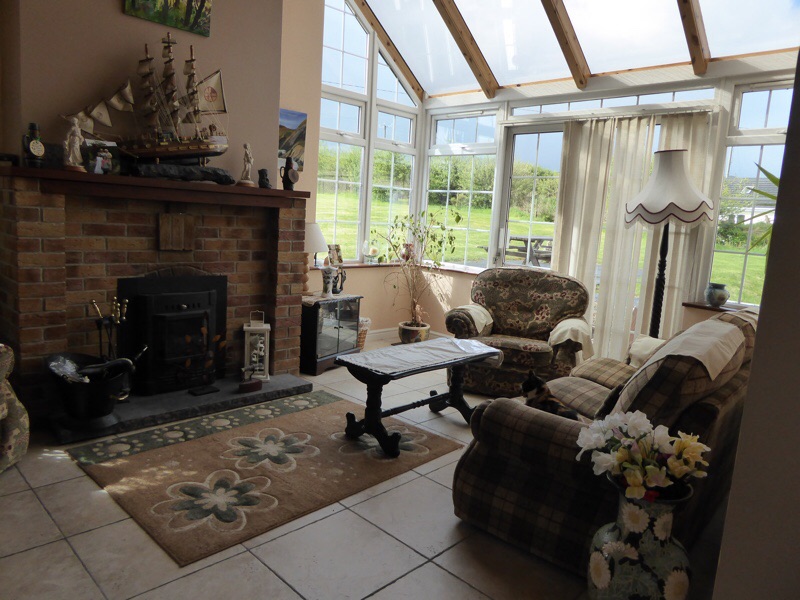 Muiris was joking with us from the moment we got into his car.  Of course, he is typical Irish.  Anyway, here is what we did today.

First we went to see the Cahergal Stone Ring Fort.  It is believed by archaeologists to have been built between the 9th and 11th centuries. Caber gal is an amazing feat of what they call “dry wall” construction with a 10 foot thick fort wall. The fort’s interior is stepped with many terraces or inbuilt stairs which can be climbed allowing you to walk along its wide girth and enjoy the view of Ballycarberry Castle. 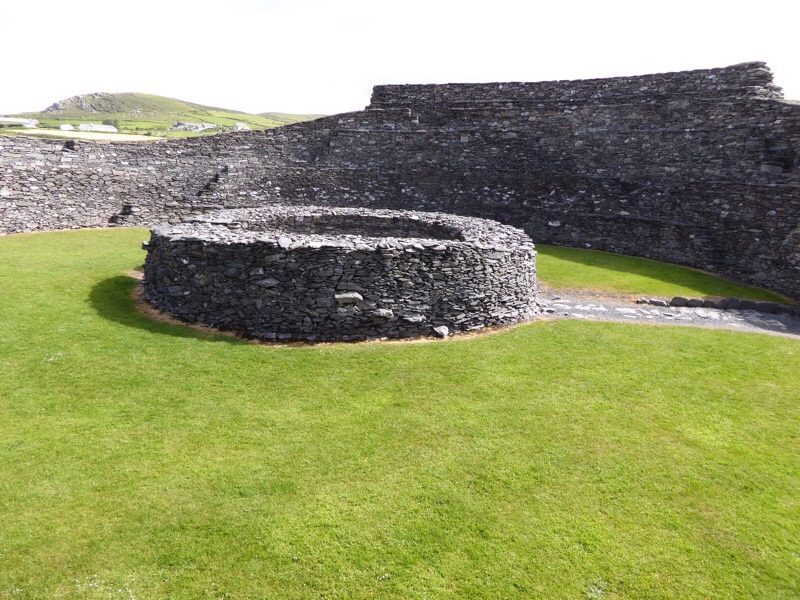 Here is Muiris by the wall. 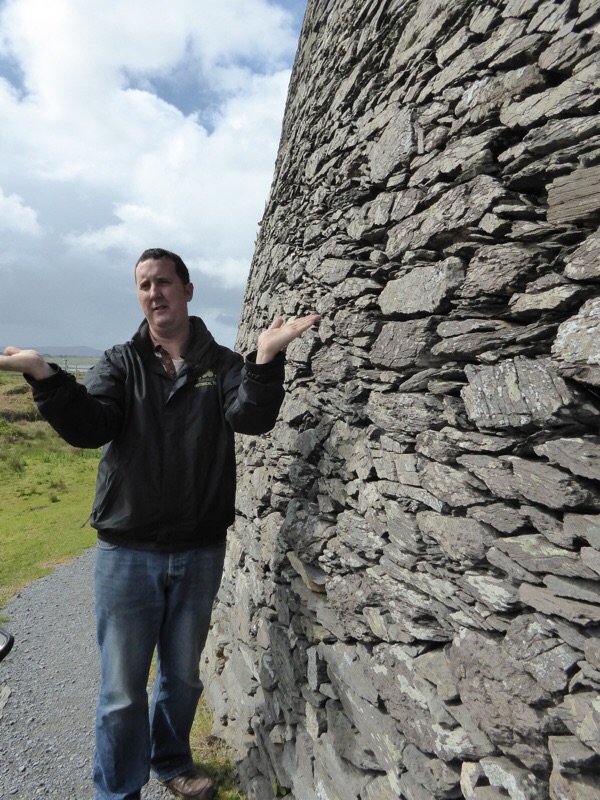 Then we took a ferry to Valentina Island.  It is 7 miles long by 3 miles wide.  We went to see the slate quarry.

Muiris took a photo of Mary and me.

We drove on a one lane road and had to wait for the workers to let us pass. 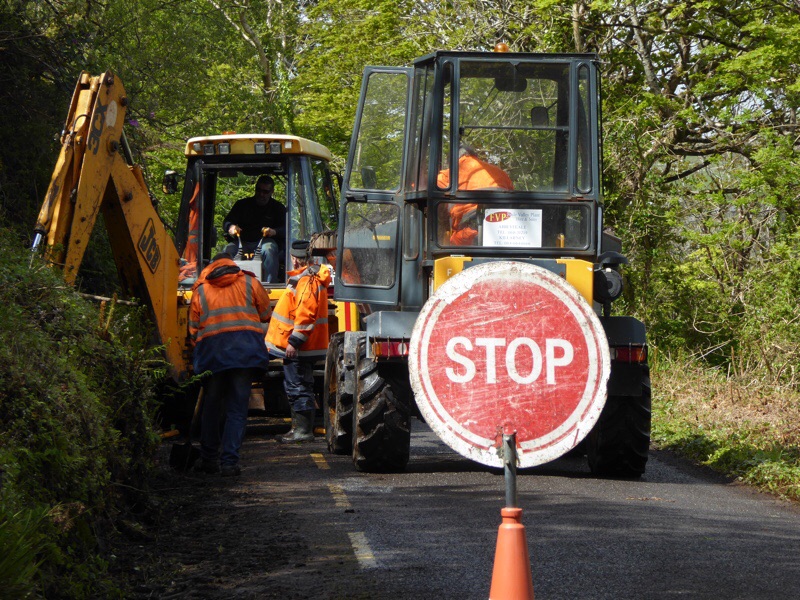 These Terapod Fosilized footprints were identified in 1993.  About 385  million years ago a primitive vertebrate passed along the muddy shore line in the equatorial swamp land and left prince is if in wet concrete. This trackway is among the old assigns a vertebrate life on land.   The Terapod was about the size of a large lizard.  There are two other places like this in New Zealand and one in Poland.

We we drove again to see the Kildreenagh Ogham Stone.  It dates back to the 5th and 6th century. It is engraved with an Early Medieval form of alphabetical or cypher which is sometimes known as the  “Celtic Tree Alphabet” and often documents land ownership or a business contract. 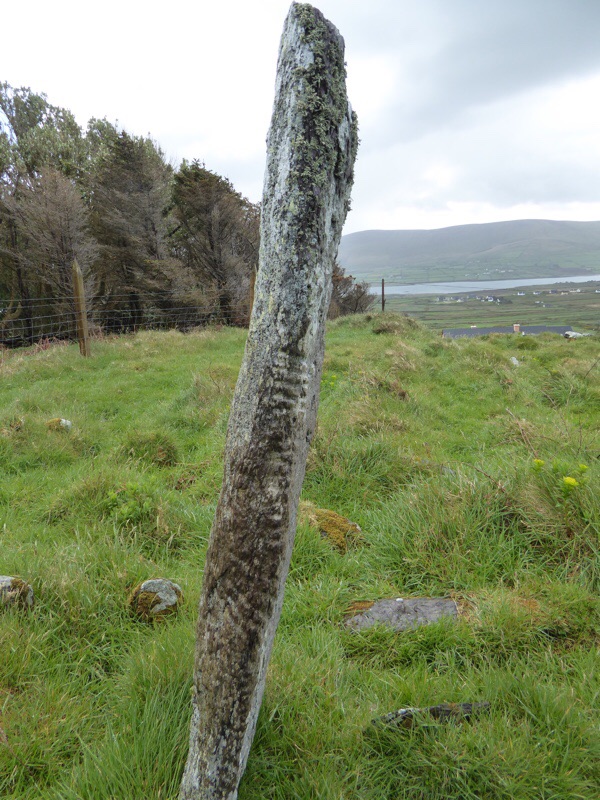 This is a view of the writing.

Muiris is also told us about how laws worked in these times.  When people wanted to seal a contract (like a marriage), each person put a finger into the hole in the stone to seal the contract 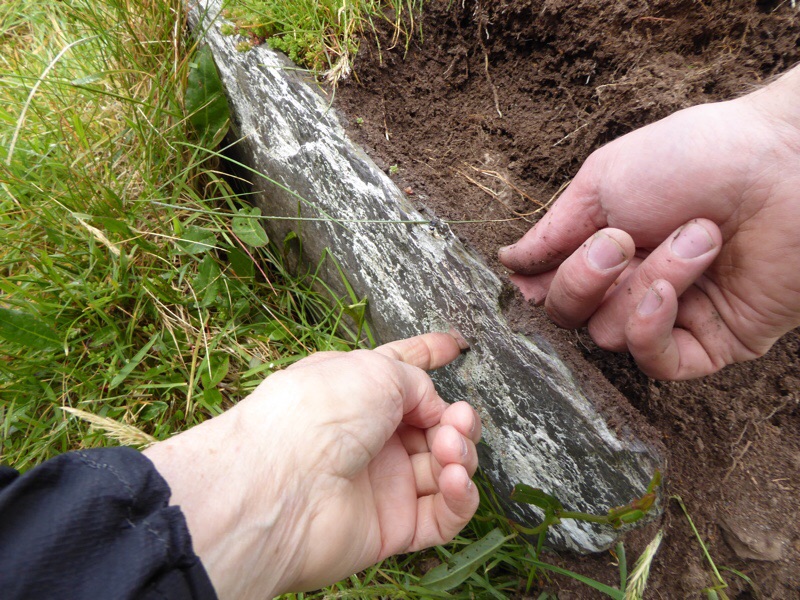 So  Muiris and I got married (ha), although he is already married and has two children.  It was so much fun joking with him.

We we saw the place where the first Trans-Atlantic Cable was laid.  It was laid across the floor of the Atlantic from Telegraph Field, Foilhommerum Bay, Valentia Island to Heart’s Content, Newfoundland, Canada.  it took many attempts before they succeeded. The peasant women would dance on the stone here each time they attempted to lay the cable. 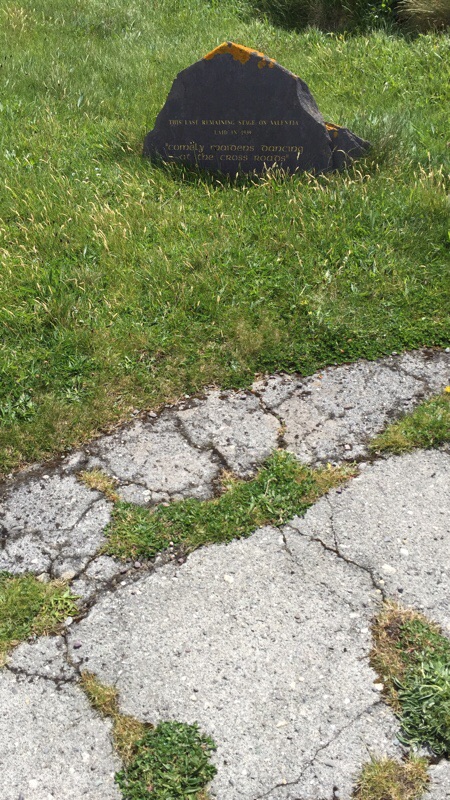 We also went to see a Wedge Tomb. These burial chambers were narrow at one end (usually decreasing both in height and width from east to west).

We drove up to the top of the hills and Mary and I got out of our car to look at the view. We could hardly open the doors to the car and we’re practically blown over from the wind.  Even though we were both missing our hike from the day we were glad to not be blown away on the top of the hill as we were hiking.

Although we didn’t get to hike, it was great fun spending the day with Muiris.

Mary took me out for a fabulous dinner tonight at Dooley’s.  Even though I am not posting photos of food like I did on the Camino, we are being fed well.  Everything has been delicious.