Before we had dinner last night, somebody suggested that we go see the museum. Pam and I were so surprised to find a man with his collection of parts from everything displayed. He is an artist. The photos can’t capture it. Notice the light fixture made from telephone receivers. There was a whole room of old telephones.

I have more photos of his displays, but here is Pam and I with the artist.

The dinner absolutely astounded me. The salad actually had real greens; paella was great; and we had crepes with fruit and chocolate for dessert.

September 23rd to Hospital Del Orbigo
Today I noticed that the stop signs in Spain are in English.

I have been struck by a quote I received on the 18th via email. “The only way to live is to accept each minute as a unrepeatable miracle.” By Margaret Storm Jameson. What a wonderful way to describe my Camino.
Today, it is not the landscape. It is the wonder of it all.
Bridge into Hospital Del Orbigo. 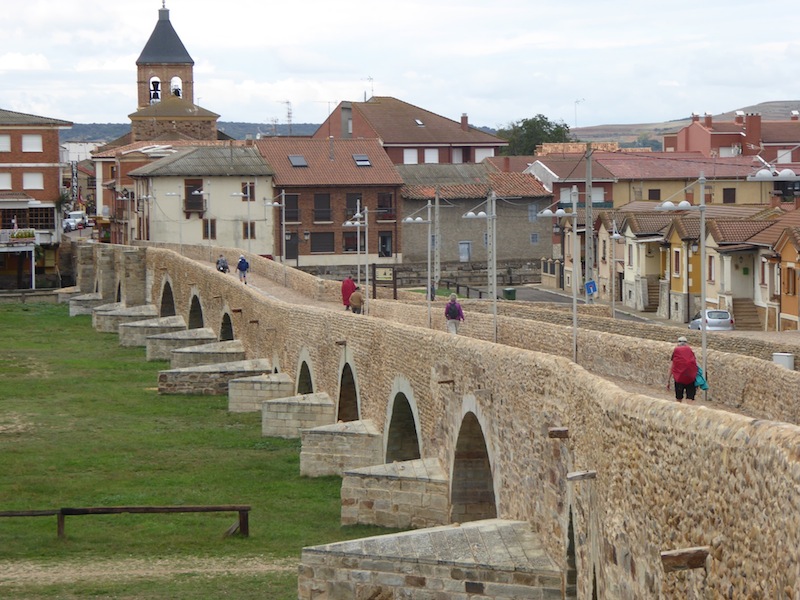 Ellen, an amazing woman I see often on the bridge.

Pam remembered staying at the Albergue Verde the last time she was here.

Here is the owner, Mincho. He built this Albergue from the store house/barn next to his family home. He lives in India about 6 months of the year.

After drinking Jasmine tea and taking a walk through town, I received the most wonderful massage from Andrea. I met Aya and Moran, from Israel, who are staying there working for about a month. At 6:30 Mincho led about 6 of us in a wonderful, meditative yoga class. Then we all shared a vegetarian dinner (leek/mushroom soup, vegetable paella, and a great cake) from their garden.

I met Faiza (originally from Egypt) and Steve from Australia and I continue to see them each evening. I also met Karen, Robin, and Betty who are from Toronto and Eva Beneyto who had been staying there for several days.
We slept until 8 and Pam left right away. She had a migraine and had to get outside. I had a hard time leaving, but finally Karen, Robin, and I left. 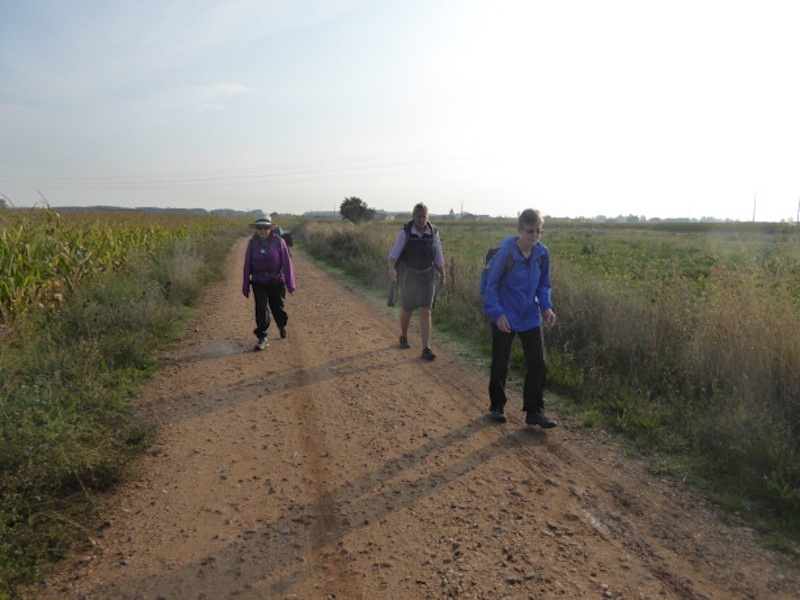 I walked by myself for the rest of the day (about 18km – a good distance for me) to Astorga. Along the way I saw a couple working in the field.

Then a man, who was also working in his field, offered me grapes. He said a few sentences in Spanish, but all I got was the word, “agua,” so I knew I needed to wash the grapes before eating them.

Further up the road I found David and his stand. He lives there all year round without power or running water. Somebody brings him supplies. I walked his small labyrinth, ate the watermelon he cut for me, washed my grapes, and put money in the donation can.

I did see the French women who I had met in the bus depot going to Leon and they took my photo by the arrow made from stones.

Fairly close to Astorga was a wonderful statue/fountain of a pilgrim. When you ran the water from the fountain, water came out of the gourd.

In Astorga I checked into San Javier Albergue.  We had many in each room.

I set up my bed and then I wandered through the town, had an ice-cream, and met Priscilla Stephane Battaglia and Leonardo Costa Pereira who are from Brazil and are presently living in London. The women from Toronto showed up. Diane was hurting and they checked into a hotel. Pam was also staying in a hotel and I didn’t see her again. We are communicating through emails and Facebook.

I went to the Cathedral and Gaudi Museum and then met Karen, Robin, and Betty for dinner in Plaza Major where we watched the two figures strike the clock.

They kicked a woman out of our hostel last night at about 10:30.  Apparently, she had an argument with the woman in charge about eating inside one of the rooms.  The woman called the police and they kicked her out.  She walked to the hostel with the nuns (even though it was full) and they took care of her.  If they hadn’t, she would have been out on the streets.

I left just before dawn and walked for a bit with Malcom, a man from London. We stopped for breakfast in Santa Catalina de Somoza for breakfast. I asked for Zumo natural and the woman asked me if I would like vegetables also. She made me fresh juice with orange, carrots, celery, mint, and I have no idea what else, but it was delicious.
I came across toe repair in the field.

After breakfast, I saw Pricila and Leonardo. The took a video of me telling Leonardo’s parents, who are in their 50s, that they are not too old to do the Camino.  It was so much fun.  I really like them.

In Rabanal del Camino I found another amazing Albergue and got the last bed available.  Dammar and Kevin shared the pasta lunch they had cooked with me.

We went into the wonderful open yard and took everything out of our bags to check for bed bugs. Mine was, “All Clear.”  They were just being careful because their were reports of bed bugs coming fromSan Javier in Astorga.
At 4:00 we had “English Tea” in the courtyard. 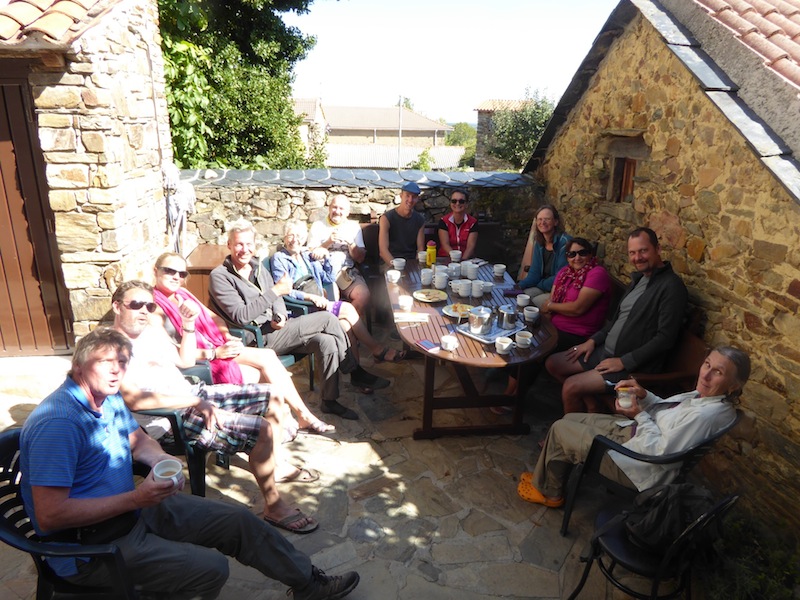 Bob, one of the hospitaliers told us the history of the Albergue.
I finally met Laura from the Portlandia American Pilgrim group. I knew we had been hiking in close proximity  to each other, but hadn’t crossed paths yet. 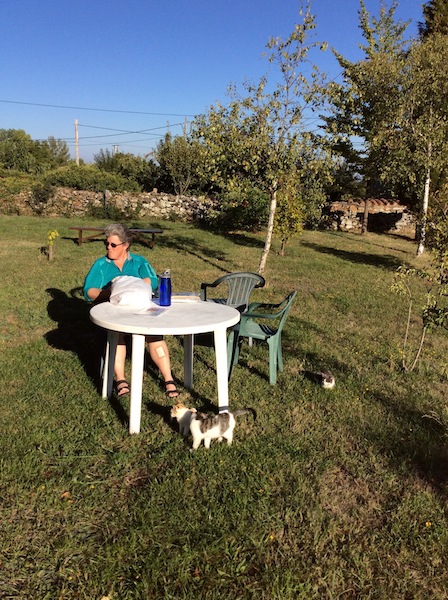 Ps couple in Rabanal make sea food paella and made enough for 8 of us for dinner. Nicolas, Bob’s wife made a salad from the garden.

Nicolas told us a fantastic, animated version of the chicken in Santo Domingo De Calzada (where I visited the Cathedral on September 5th.

Here is the story:

Legend tells of a German Pilgrim called Hugonell who was walking to Santiago with his parents, when they decided to rest at an inn in Santo Domingo de la Calzada. The owner of the inn´s daughter immediately fell in love with him; however her feelings were not reciprocated, so the girl, angered, placed a silver cup into his luggage and accused the boy of theft. Thieves at that time were punished by hanging, and this was the fate of Hugonell. His parents, saddened by his death continued the pilgrimage, and upon arriving in Santiago de Compostela, began their return journey to visit the grave of their dead son. When they arrived in Santo Domingo however, they found their son still hanging in the gallows but, miraculously alive. Hugonell, excited, said to them: “Santo Domingo brought back me to life, please go to the Mayor´s house and ask him to take me down”. Quickly, the parents arrived at the Mayor´s house and told him of the miracle. The incredulous Mayor, who was preparing to have dinner with friends, responded: “That boy is as alive as these two roast chickens we are about to eat,” and suddenly, the chickens came to life, sprouted feathers and beaks and began to crow, and so, to this day there is a saying about the town which goes: “Santo Domingo of the Way, where the roosters crow after being roasted”.

She is a wonderful storyteller.

The grounds of the Albergue were so beautiful and a wonderful place to relax.

I left Rabanal at 7:15 this morning. The sunrise over Rabanal was beautiful.

I stopped for breakfast in Foncebadon and had organic muesli. It was really delicious.   Priscilla and Leonardo were there.  I was so glad to see them again. 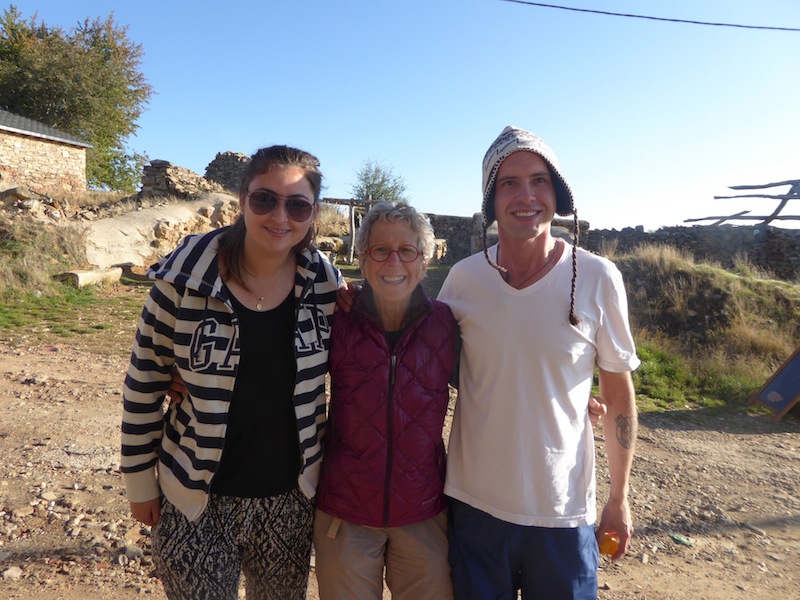 I got to feed the local goat. 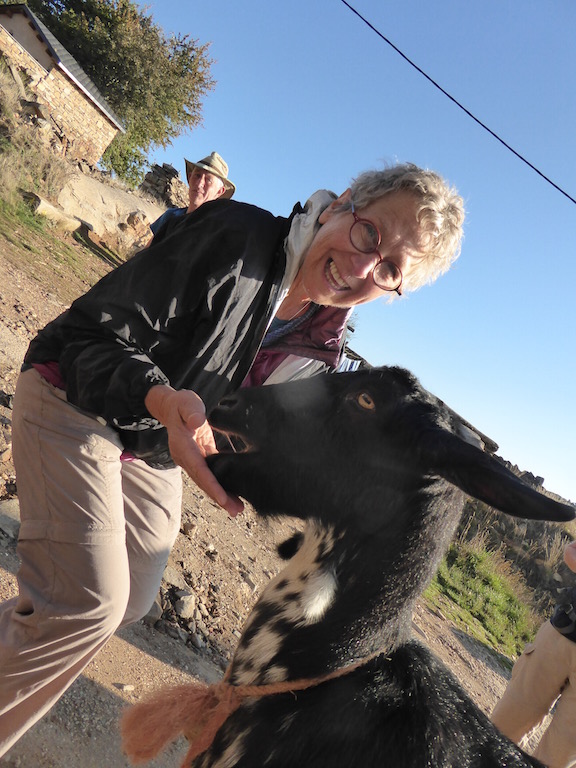 This woman has a new way to use sponges to cushion her shoulder straps. 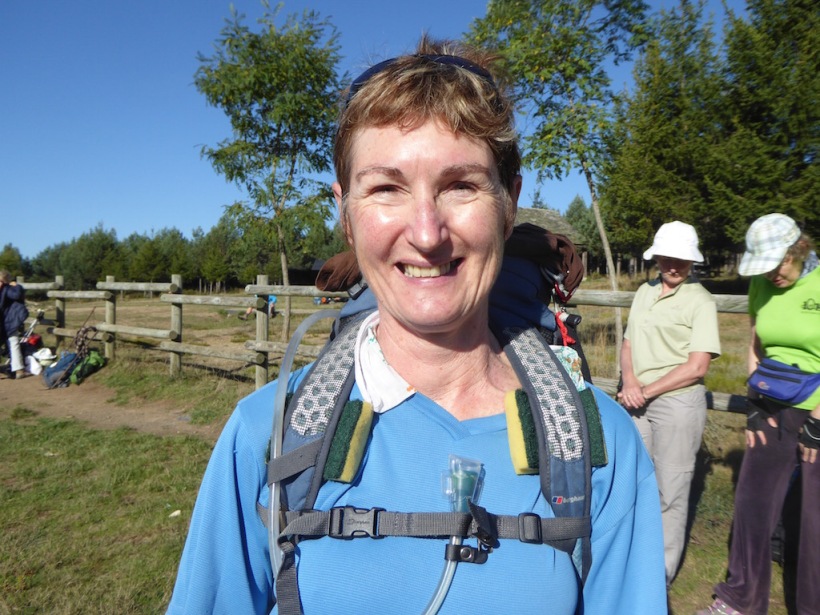 The Camino is back in the mountains so today was up and down with the steep down being through loose rocks. I loved it.

I am in a brand new Albergue in Acebo and had dinner with Faiza, Steve, and Marlin.  It is great to have dinner with new friends.