The small towns like Ventosa and Granon seem almost empty of people. The church in Ventosa is only open on Sunday when the priest comes and then only people over 50 attend. Sometimes there are more peregrinos than townspeople.
I forgot to write that Clemente talked me into sending my pack via van from Azofra to Granon. I was feeling both the freedom and naked. By the time I reached Granon in the heat of the day, it was nice not to have it. But, I decided to put it back on to Belorado and today ton Villafranka Montes de Oca. I spent so much time picking the right pack. So back to “Esta cominondo poco e poco.”

Most importantly I forgot to write about the absolutely magical, inspiring meditation ceremony we had in the church Albergue in Granon after dinner. After we cleaned up from dinner , we were invited into the church choir loft by the hospitalier. They had lit candles all around the loft. Robin played music on her use. We were invited to hold one of the candles and pass it around the room as we each had the opportunity to say something about our Camino. Again I was struck by the wonder of all the foreign languages. Again I was overwhelmed by how the Camino is not the walking, but the people. People from so many countries sharing an experience, each with their own life stories, feelings, goals, and perspectives on the same path; step by step.

I had a great time yesterday walking around in Belorado. I came across a small group of locals who were drinking wine and, of course, sat down with them for a bit. Yes, I had a sip of wine. I can only do small amounts at a time and still love my water. 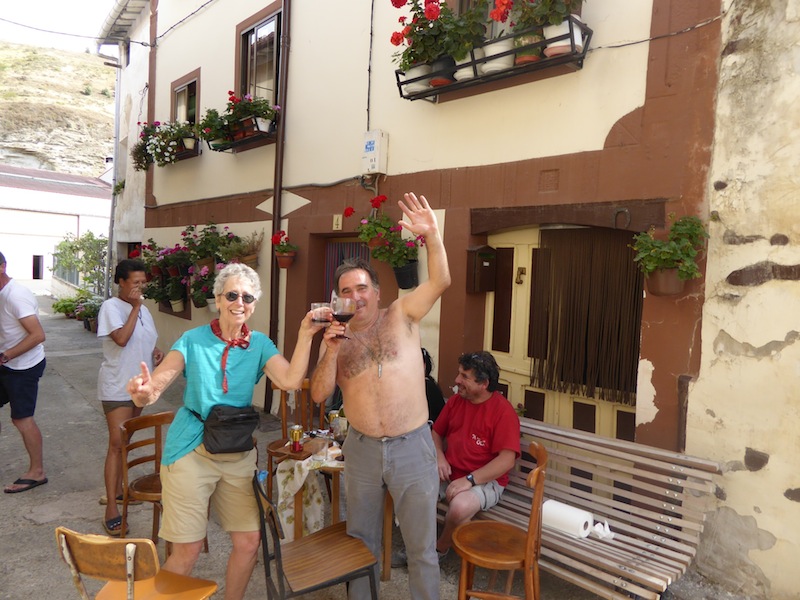 Then I heard a small band and followed them down the street through the town to where a party was going to happen.

I loved sitting in the court-yard before dinner trying to understand the conversations in so many languages. 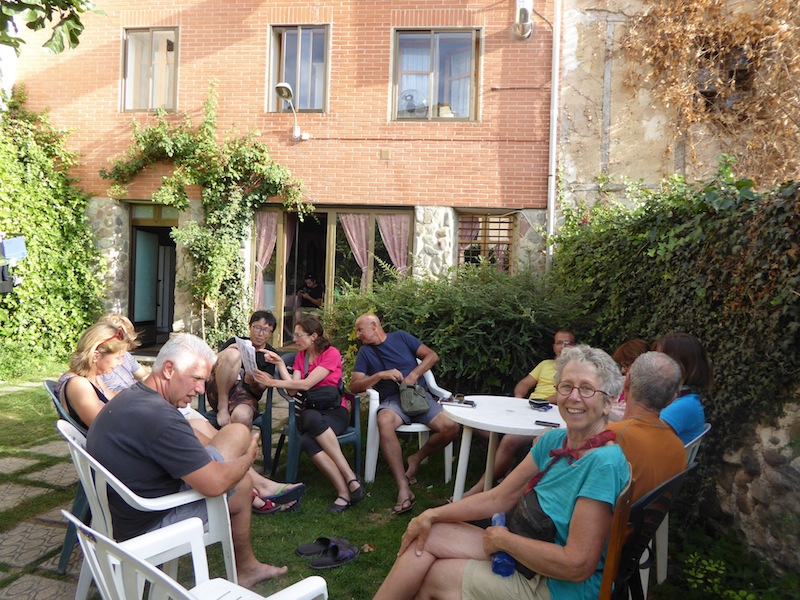 I had dinner with two new friends, Rosa and Elodia. 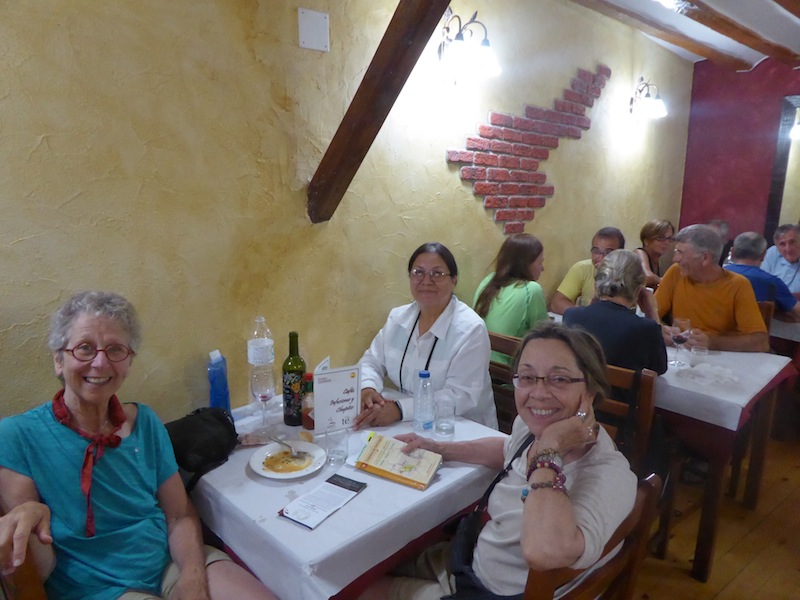 In Belorado Clemente got permission for us to return to the Albergue at 10:30 instead of 10 so we went to the festival to hear the concert and play bingo in the contest. It is still the “gracias” festival, but not for grapes and wine because there are no grapes growing here. The festival went on all night again and ended with a band going through the streets at 5:30 am.

Today’s hike to Villafranca Montes de Oca was pretty easy this morning (11.9 km). We stopped for breakfast in Villambista and I saw Lydie (the woman with the dog) again. I have crossed paths with her several times and love seeing her.

I had a great lunch with in the San Anton Abad Hotel restaurant which is attached to the Albergue with Clemente and a friend of his who rode his bike here to see Clemente. The story about the Albergue is that the man who owns the hotel walked the Camino and wanted to give something back to the pelt rims so he built an Albergue.

Clemente thinks I should send my pack tomorrow to go over the “mountain” but it is really only a couple of hills with 600 meters of elevation, back down, and up about 100 meters in about 12 km and then 3.6 km more.

The sunflowers along the road we so much fun.  People had touched them and made pictures on them.  Some had faces or arrows.

Many of the churches we passed had stork nests on them.  We would have to be here in spring to see the storks.

4 thoughts on “More about Ventosa, Azofra, Granon, and Belorado and on to Villafranka Montes de Oca”